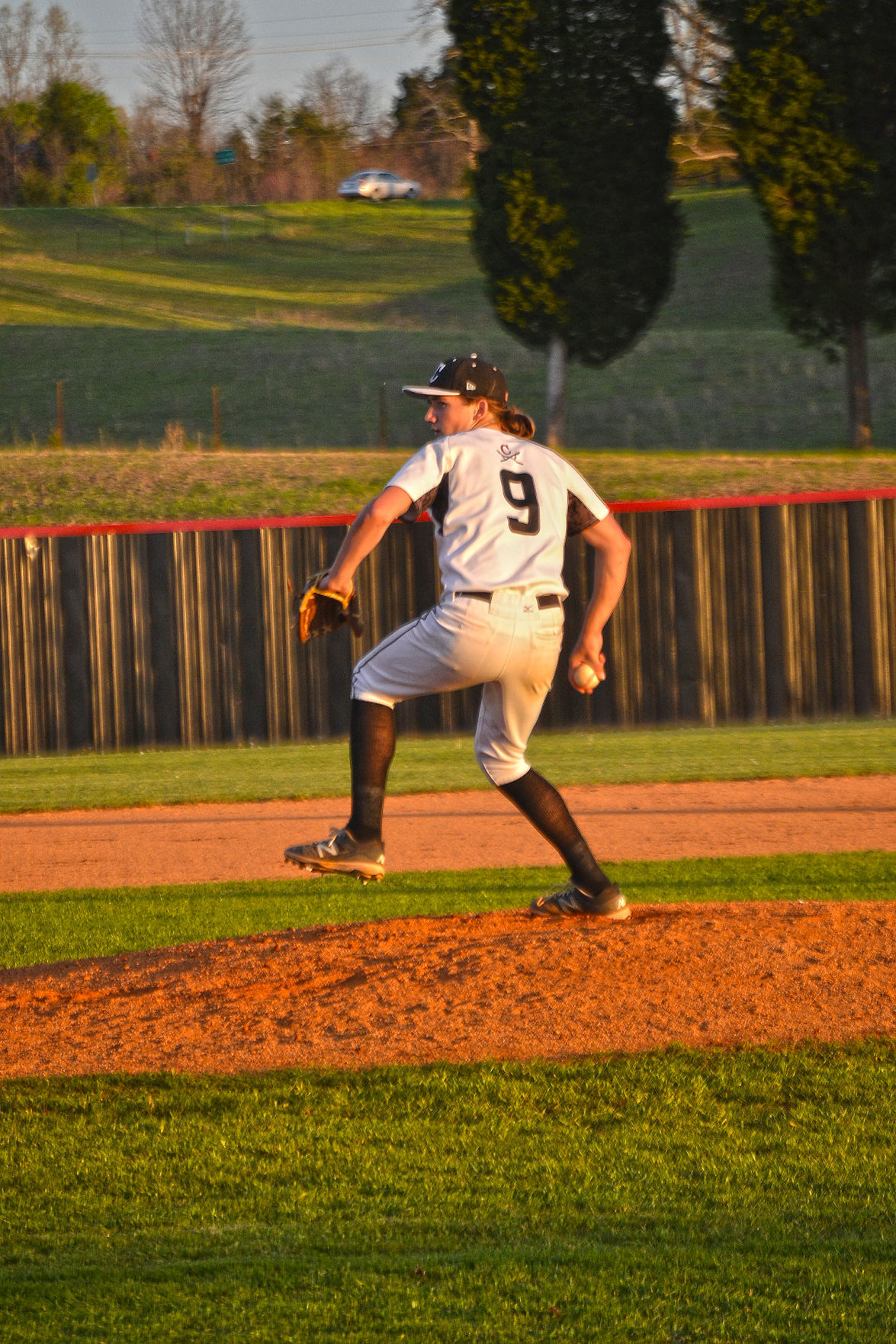 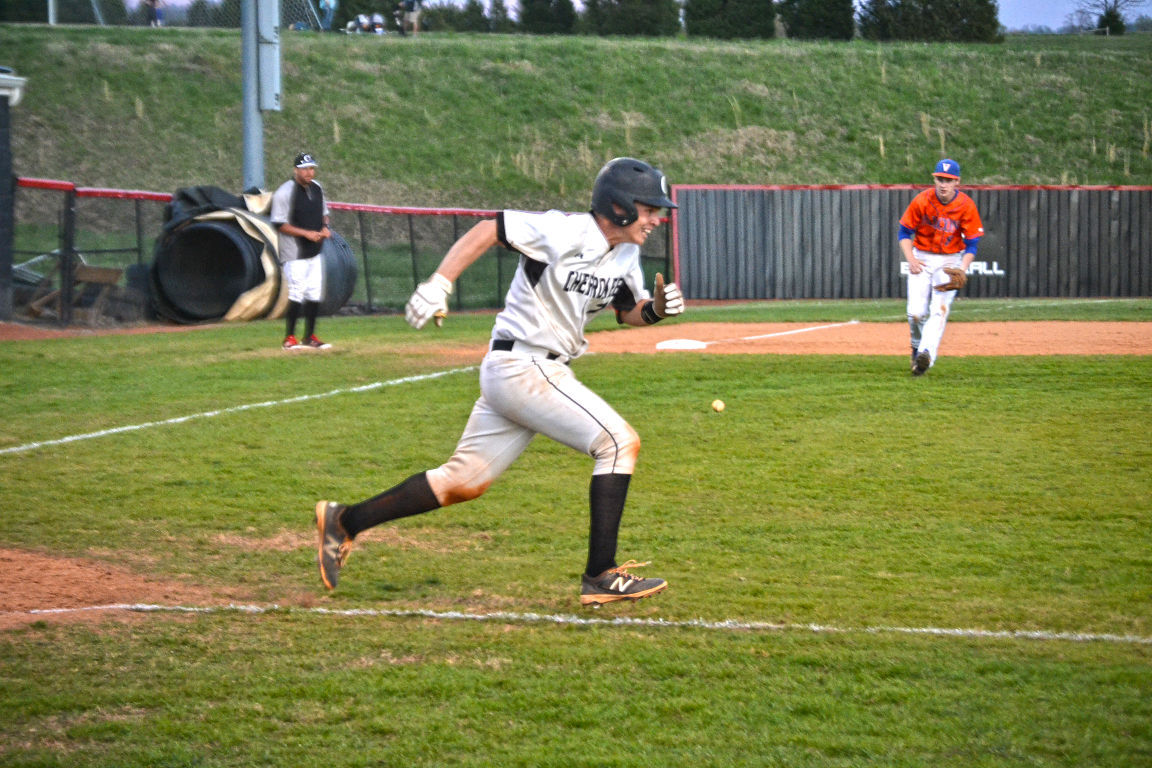 Conner Powell bunts a runner over in the fourth inning. 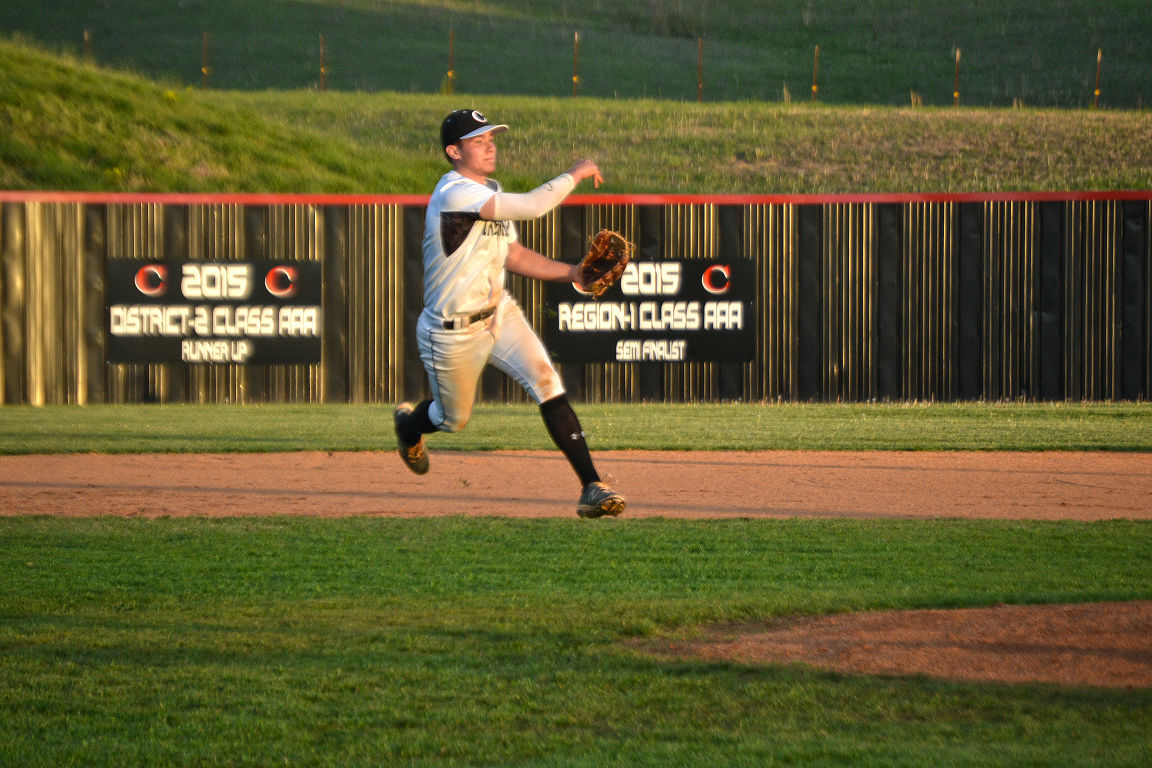 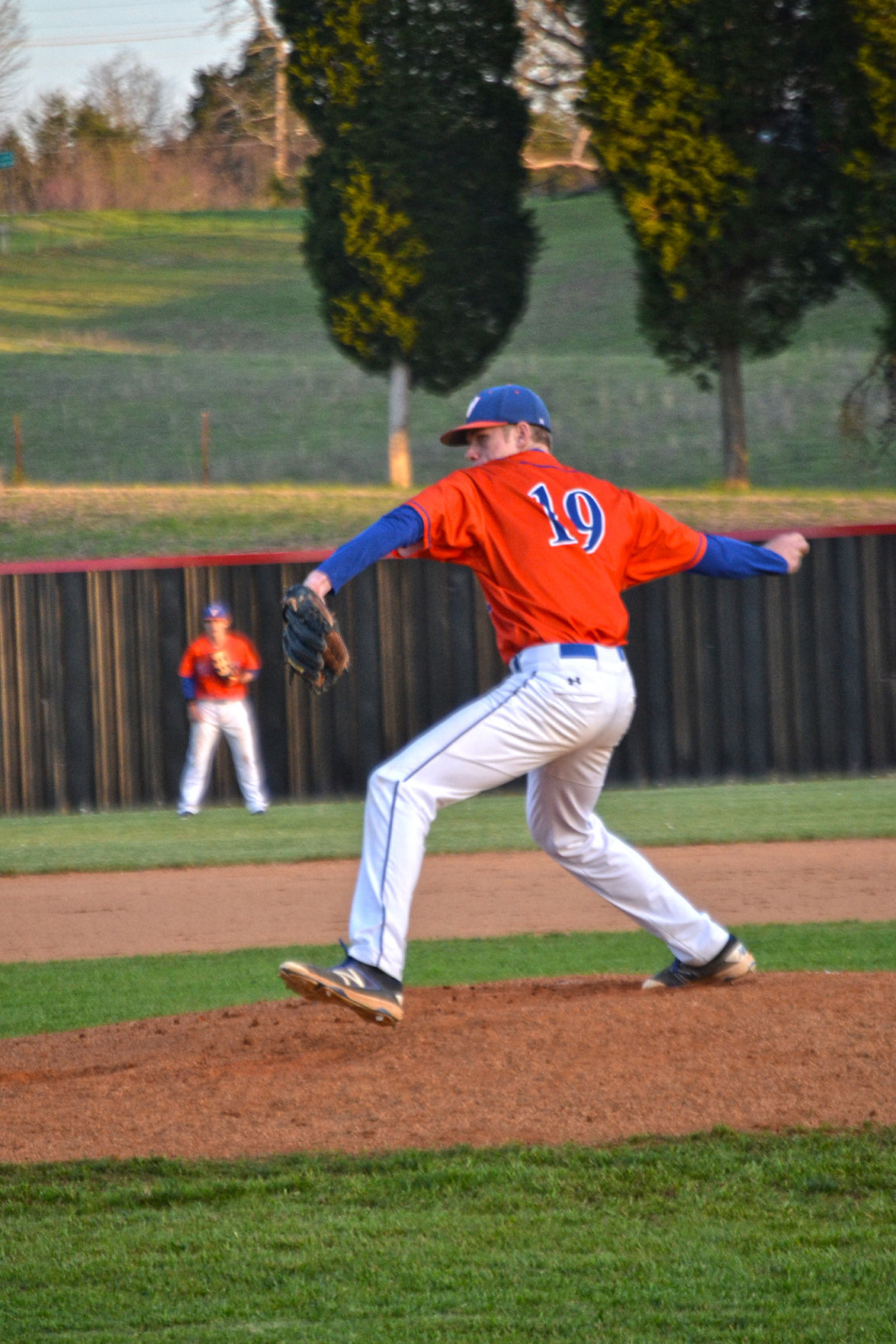 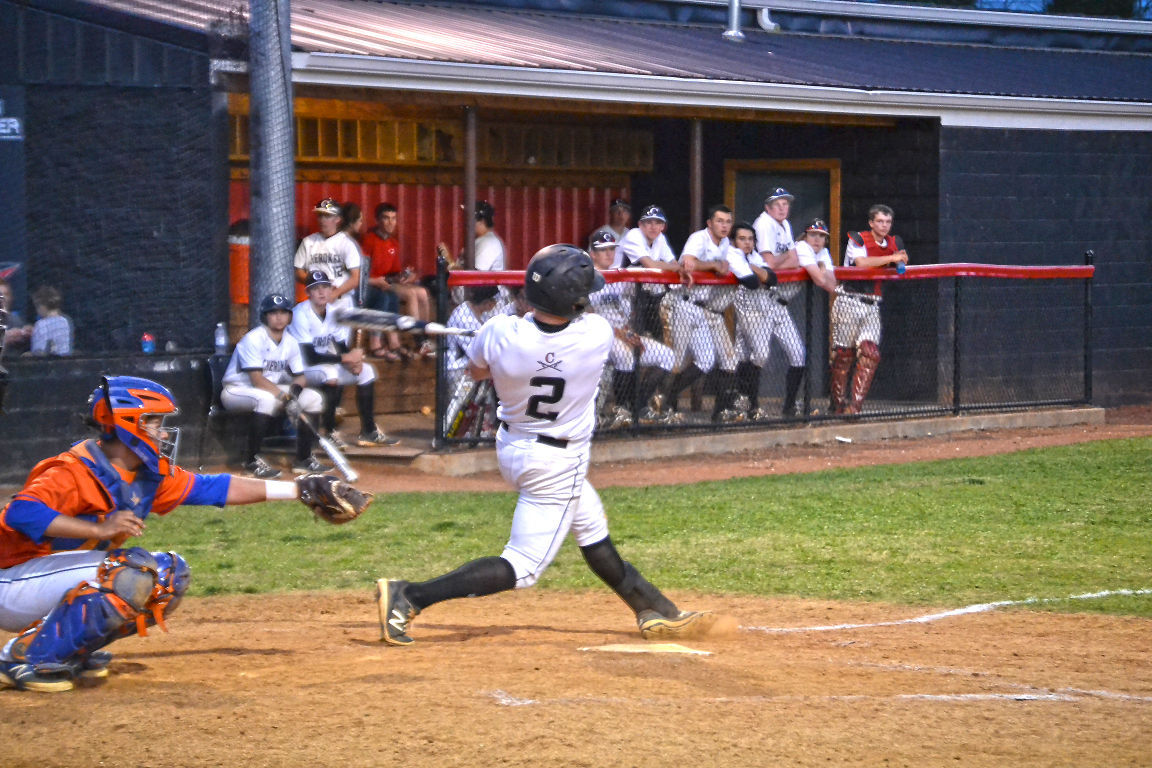 Aaron Pratt drives in a run with a single. 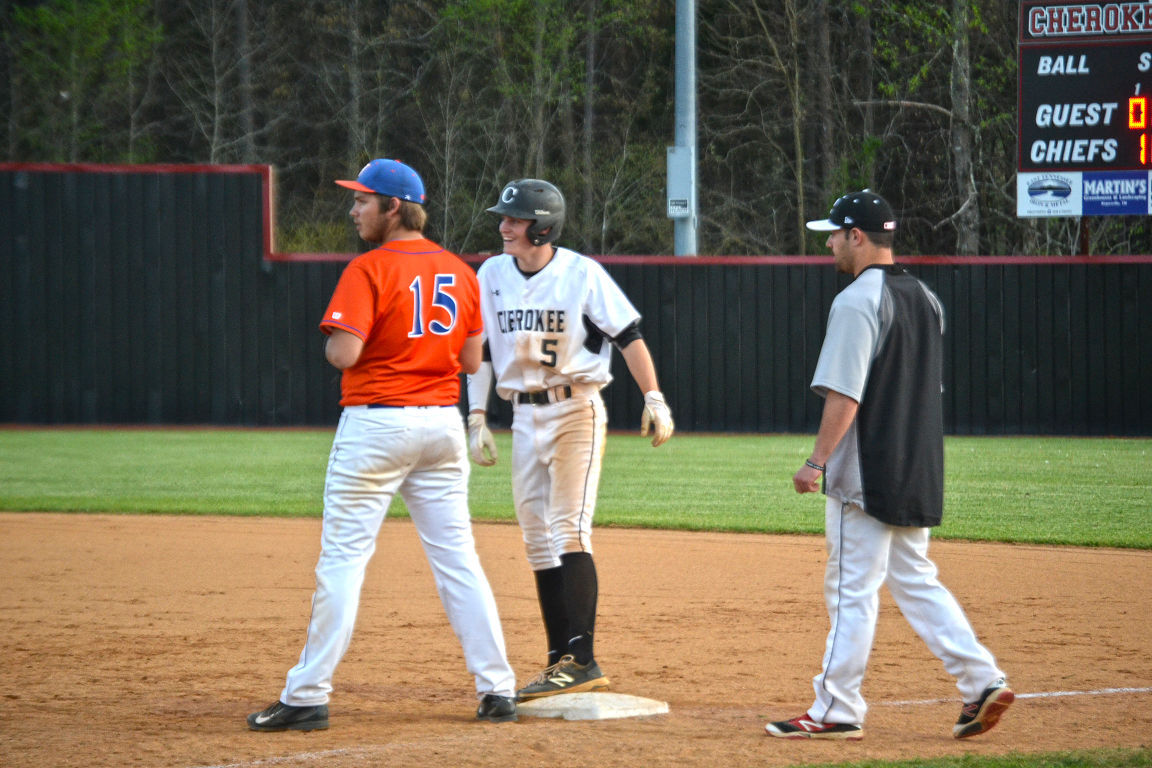 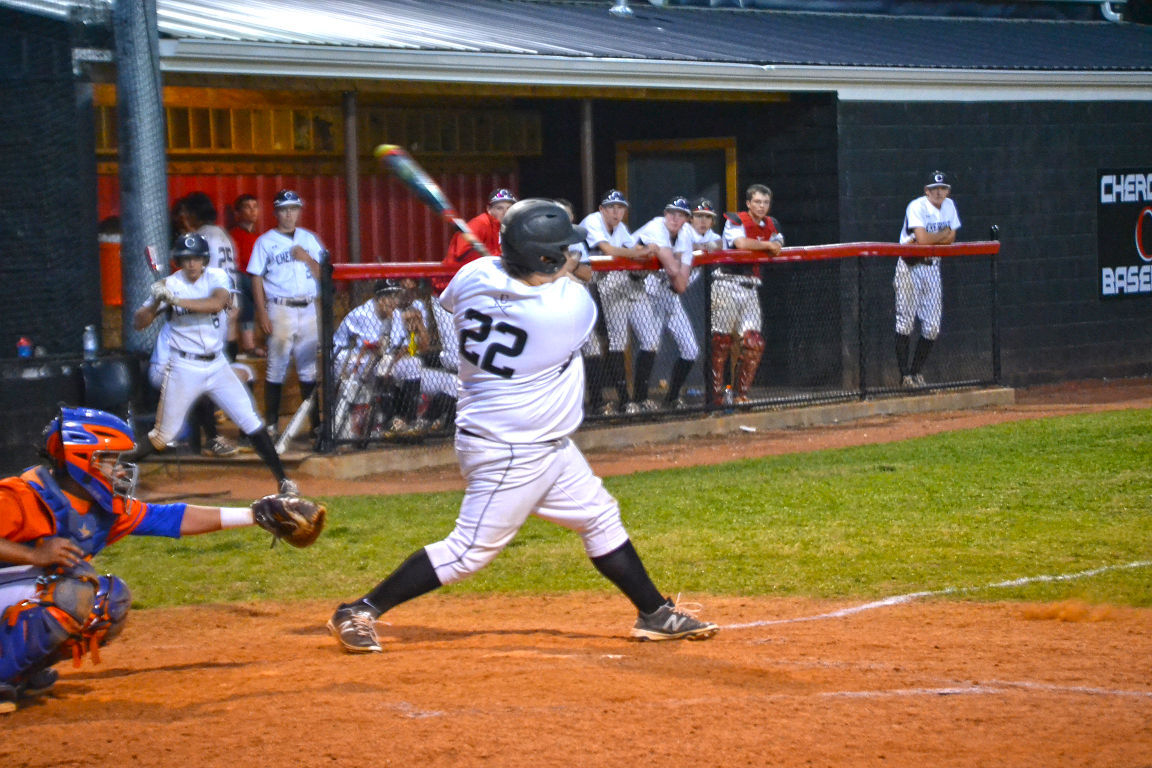 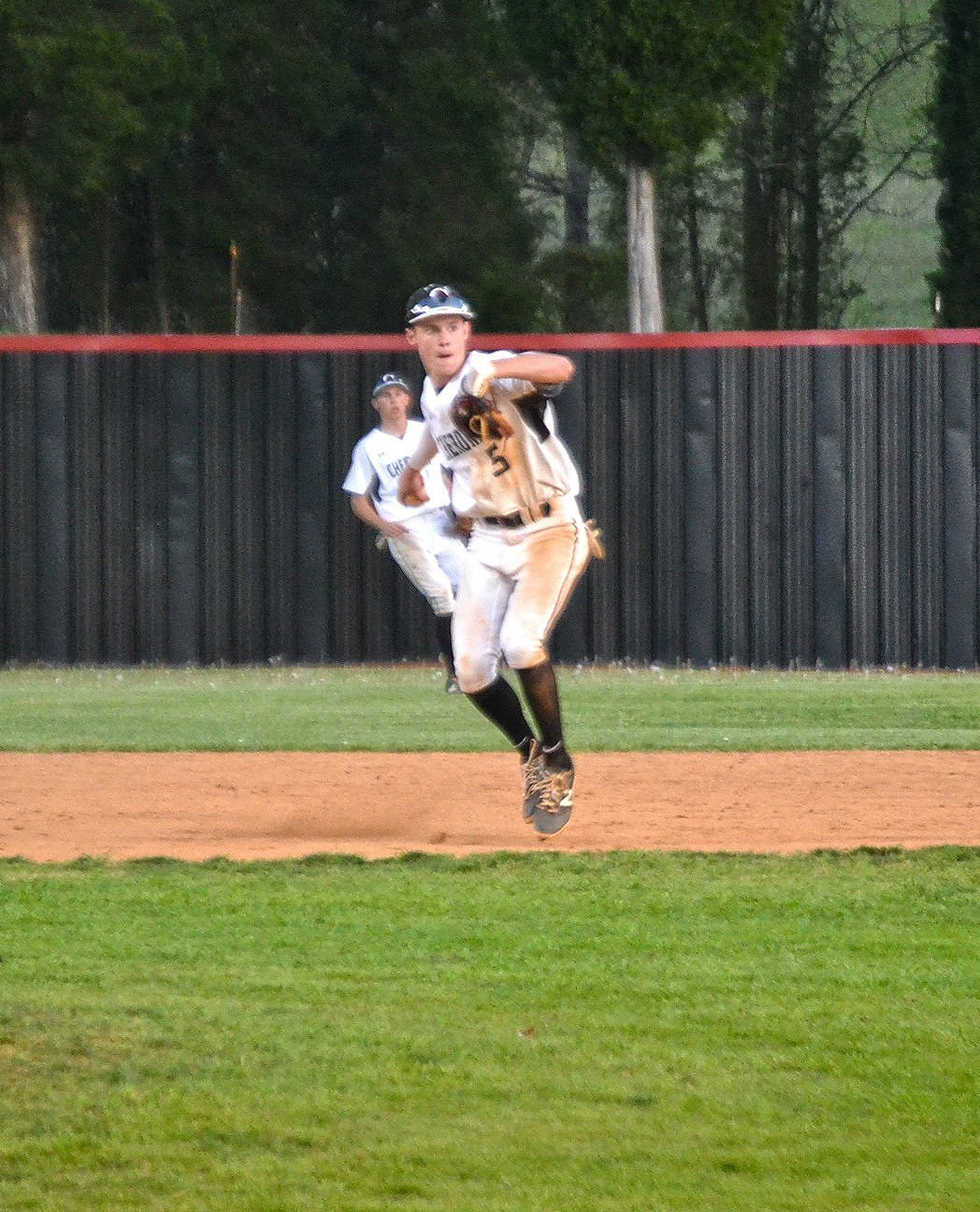 J.T. Brooks throws out a runner from shortstop. 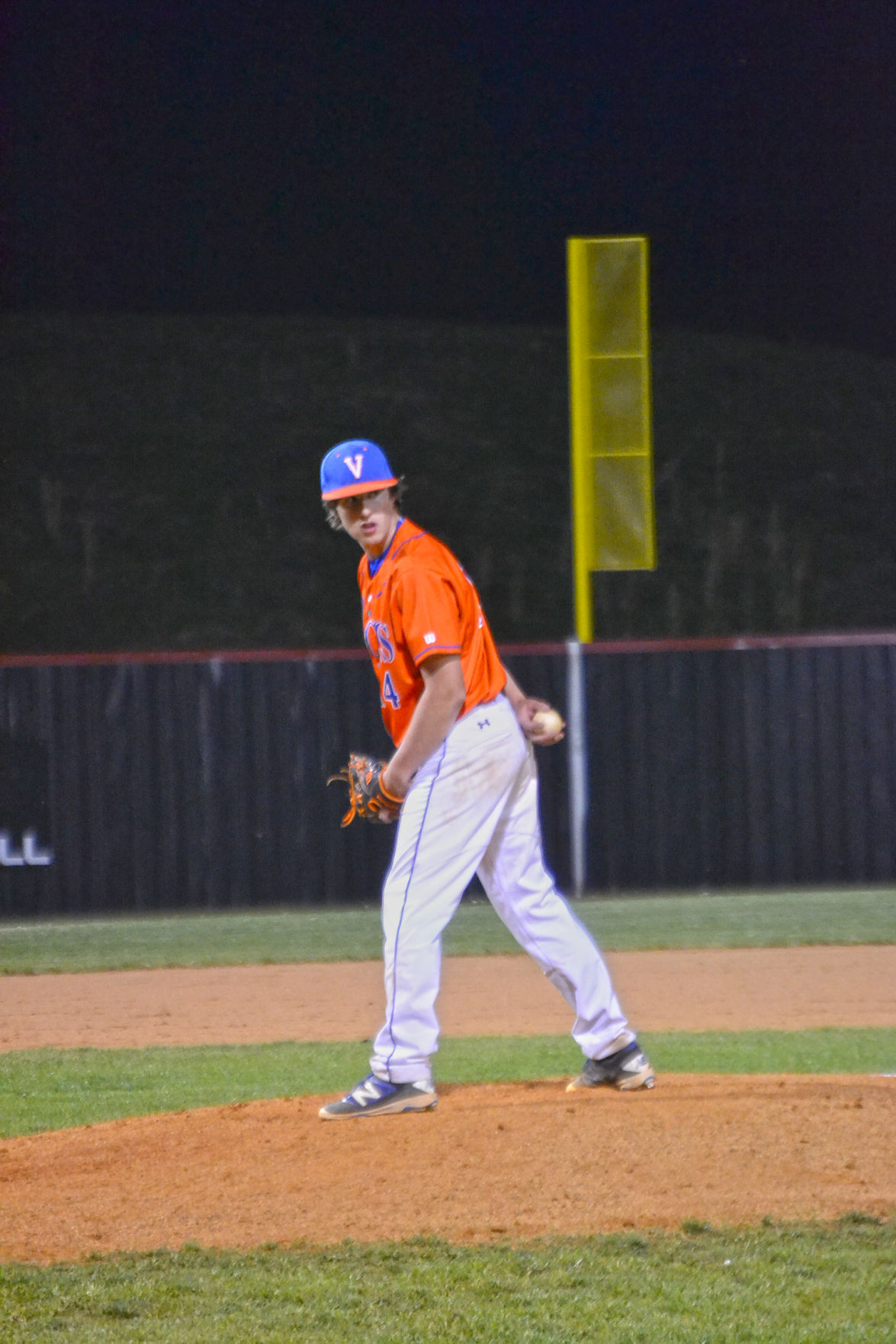 Ethan Sargent looks a runner back to the bag at first base. 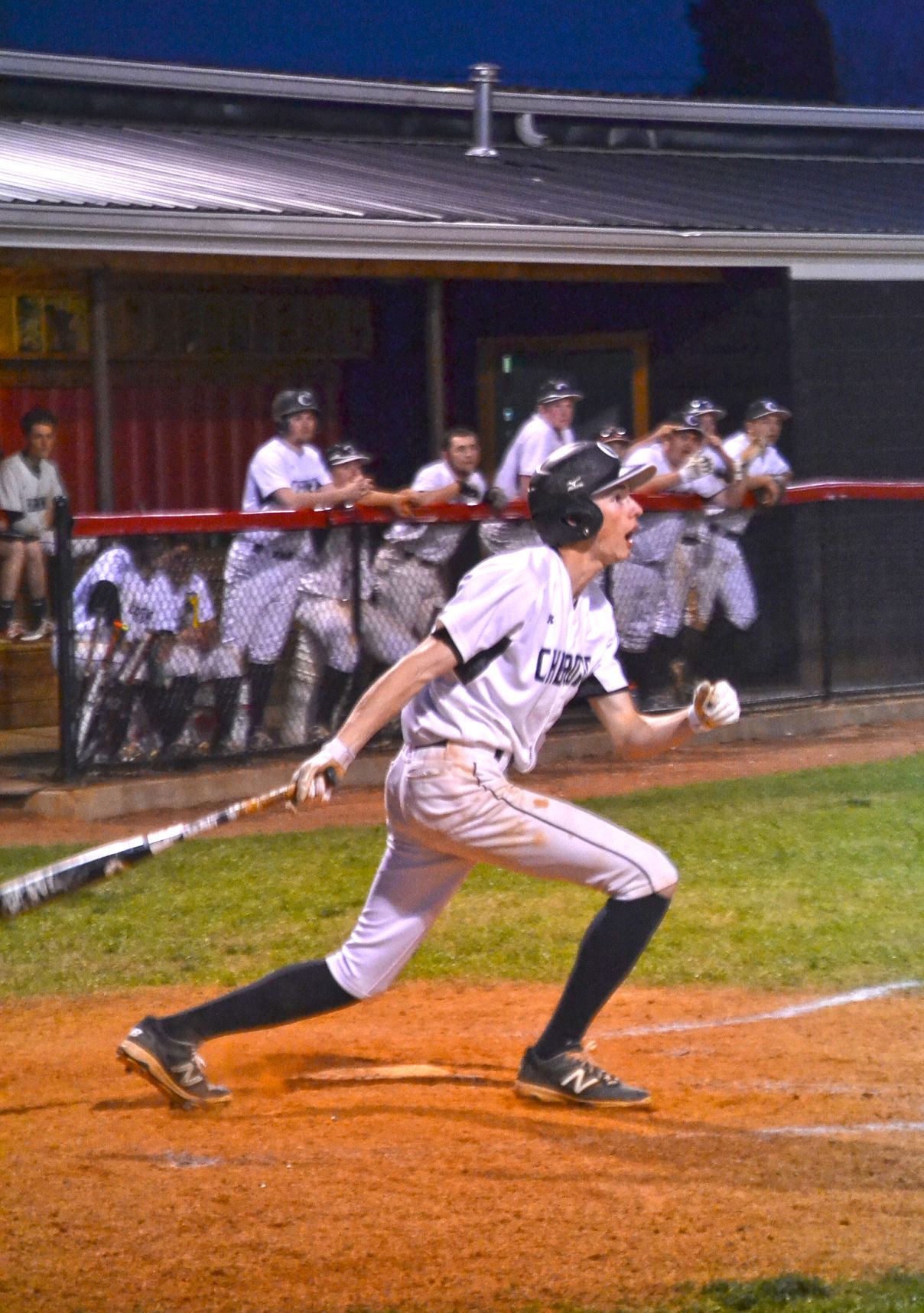 Donovan Keller watches the flight of a fly ball to the right side. 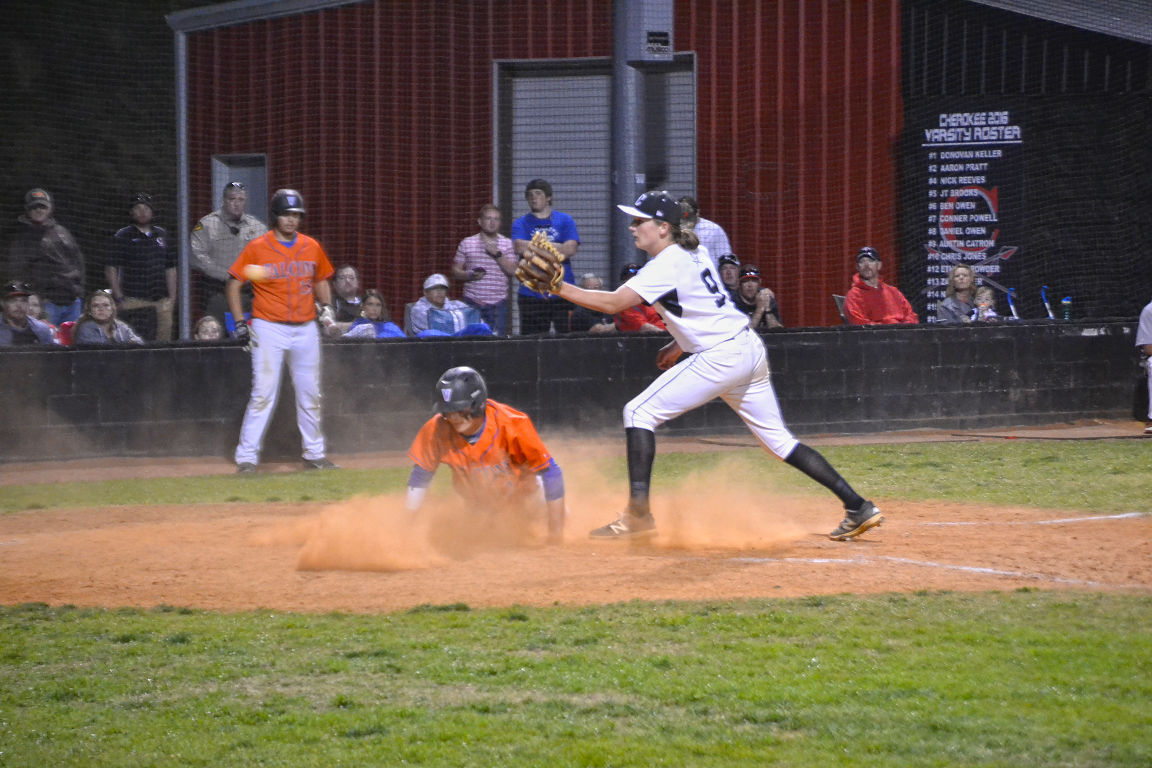 Conner Powell bunts a runner over in the fourth inning.

Aaron Pratt drives in a run with a single.

J.T. Brooks throws out a runner from shortstop.

Ethan Sargent looks a runner back to the bag at first base.

Donovan Keller watches the flight of a fly ball to the right side.

ROGERSVILLE – The differences in the county’s two high school baseball teams were illustrated by their play and their respective coaches’ postgame comments Friday night at the Reservation.

Matt Carter, whose 8-12 Cherokee Chiefs swept Volunteer for the first time since 2012 with the 8-3 win, praised his team’s trademark hustle, while coach Justin Hite questioned the Falcons’ effort.

“I shouldn’t have to climb on a kid or group of kids at the top of the seventh to get going,” Hite said.

“Until the ‘me’ attitude turns into the ‘we’ attitude, the scoreboard is going to keep reflecting games like this,” Hite said.

“All we can do is go back to the drawing board and see what changes we can make, and see if we can find nine that can go out and compete on a day-in and day-out basis. I guess the crux of that falls on me. We’ll make changes necessary,” he said.

Cherokee scored a run in the first on a passed ball and manufactured another run in the third with an error, stolen base and sacrifice fly.

“We like to put pressure on everybody, shorten up our swings, put the ball in play, two strikes cut our swing down, lay some bunts down, steal some bags,” Carter said. “We definitely did that today.”

That mindset was on full display in the fifth inning, when the Chiefs built their lead from 2-0 to 7-0.

After Chiefs starter Austin Catron retired the Falcons in order the second inning in a row, Cherokee went to work on Volunteer starter Preston Heard.

Fields booted a ground ball by Catron, allowing Owen to score for a 6-0 lead. A walk by Donovan Keller and infield single by Pratt plated Powell for a 7-0 lead, courtesy of five runs on infield ground balls.

“Putting the pressure on their defense helped us score that big five,” Carter said. “I kept yelling at our guys, ‘Let’s put a crooked number up there.’

“We did a lot of that with two outs. It was a good job on them. Their approach at the plate, hard contact and making them make mistakes,” Carter continued.

“We tell our guys no matter what, you’re running hard out of the box, trying to beat it out. It doesn’t matter where it’s at. That puts pressure on defenses,” he said.

“A couple of balls in the six-hole that their shortstop made great plays on, we’re busting it down the line. That puts pressure on them. A couple of mistakes by them, we capitalized on. I’m just happy with the victory and the way we played today,” Carter said.

“The one inning kills us. That’s been our story all year,” Hite said. “I think in the bottom of the fifth we made five errors. We made five errors and gave up five runs. You can’t compete in any league giving extra outs to good teams. That’s just what we’re dealing with.”

Volunteer finally put one on the board in the sixth. Wilmot drew a one-out walk then moved to third on a walk and single. A wild pitch by Catron allowed Wilmot to score and cut the lead to 7-1. But Catron induced a line-out and fly ball to get out of the inning.

“Command the strike zone and let them make contact, let your defense work,” Carter said. “That’s something you’ll hear me say a lot. Let’s pitch to contact. Our defense did a great job behind him today. I’m proud of my boys.”

Cherokee pushed another run across in the bottom half. Daniel Owen beat out an infield single and stole second one out later. He advanced to third on a groundout then scored on a wild pitch by Falcon reliever Ethan Sargent.

Volunteer loaded the bases off Cherokee reliever Chris Jones in the seventh with two singles and a walk. Catcher’s interference on Sargent’s swing allowed a run to score to cut the lead to 8-2.

With the bases still loaded, Lucas Adkins drew a walk to make it 8-3. Logan Lawson then lined out to center field to end the game.

“That last inning there’s a little more pressure on them if we don’t kick the ball around,” said Hite.

Combined with Cherokee’s 7-1 victory April 2 at Volunteer, the Chiefs earned the sweep.

“It’s definitely a huge series with Volunteer. I got the monkey off my back getting that sweep. My last three years, we’ve gotten one there and managed to let one slip away here or vice versa. So it’s big and puts a staple on what we’ve done here. We played good baseball,” Carter said.

“It’s good to sweep somebody. We haven’t swept anybody this year. We’ve been splitting with everybody. So taking two from them is an honor. Our guys played hard and I’m proud. It’s a battle playing those guys,” Carter said.

Cherokee, which played Sevier Monday and Tuesday and the Hardball Classic with East and West Thursday through Saturday, has a home and away with Cocke County Monday and Tuesday, before closing against four non-conference foes.