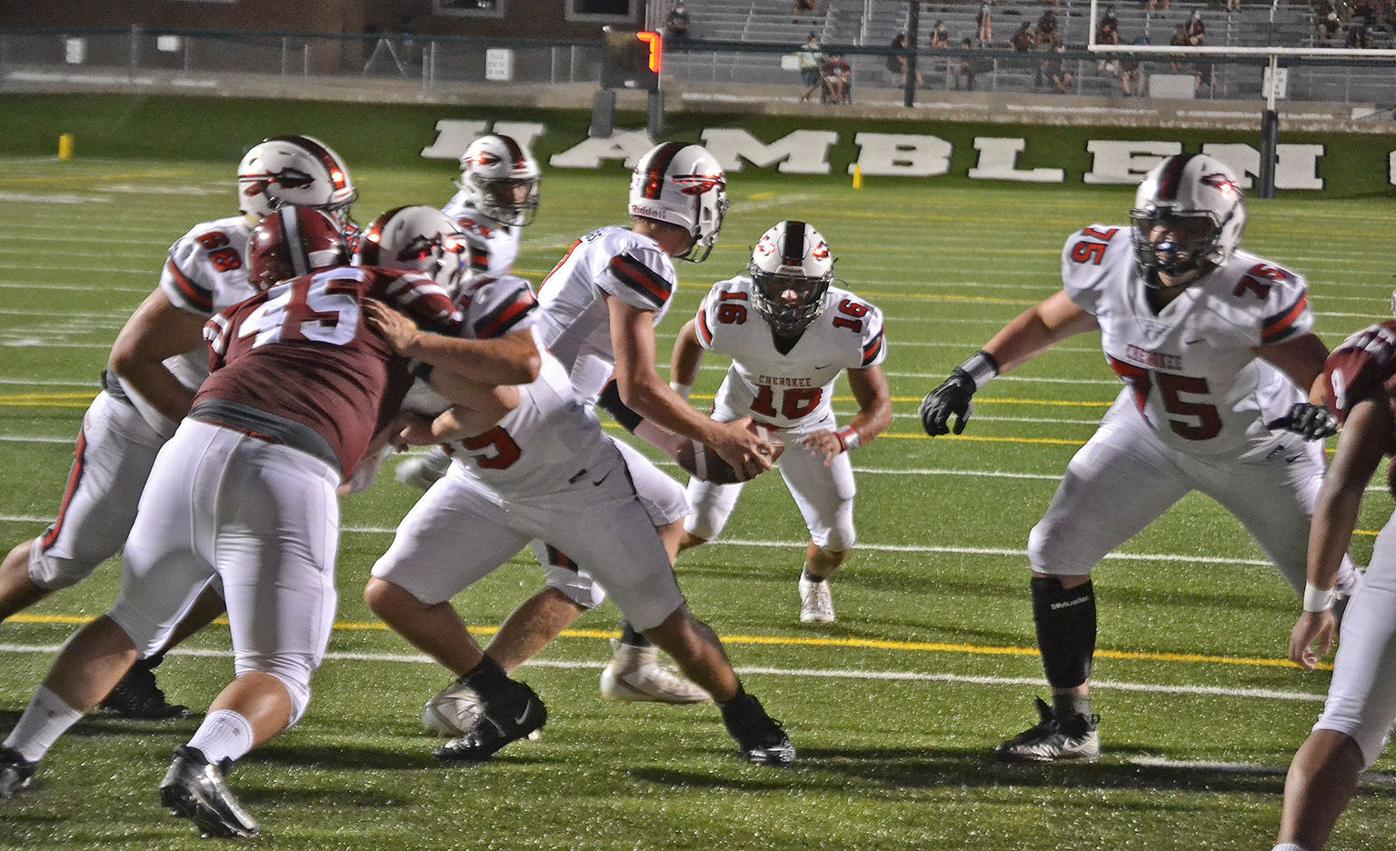 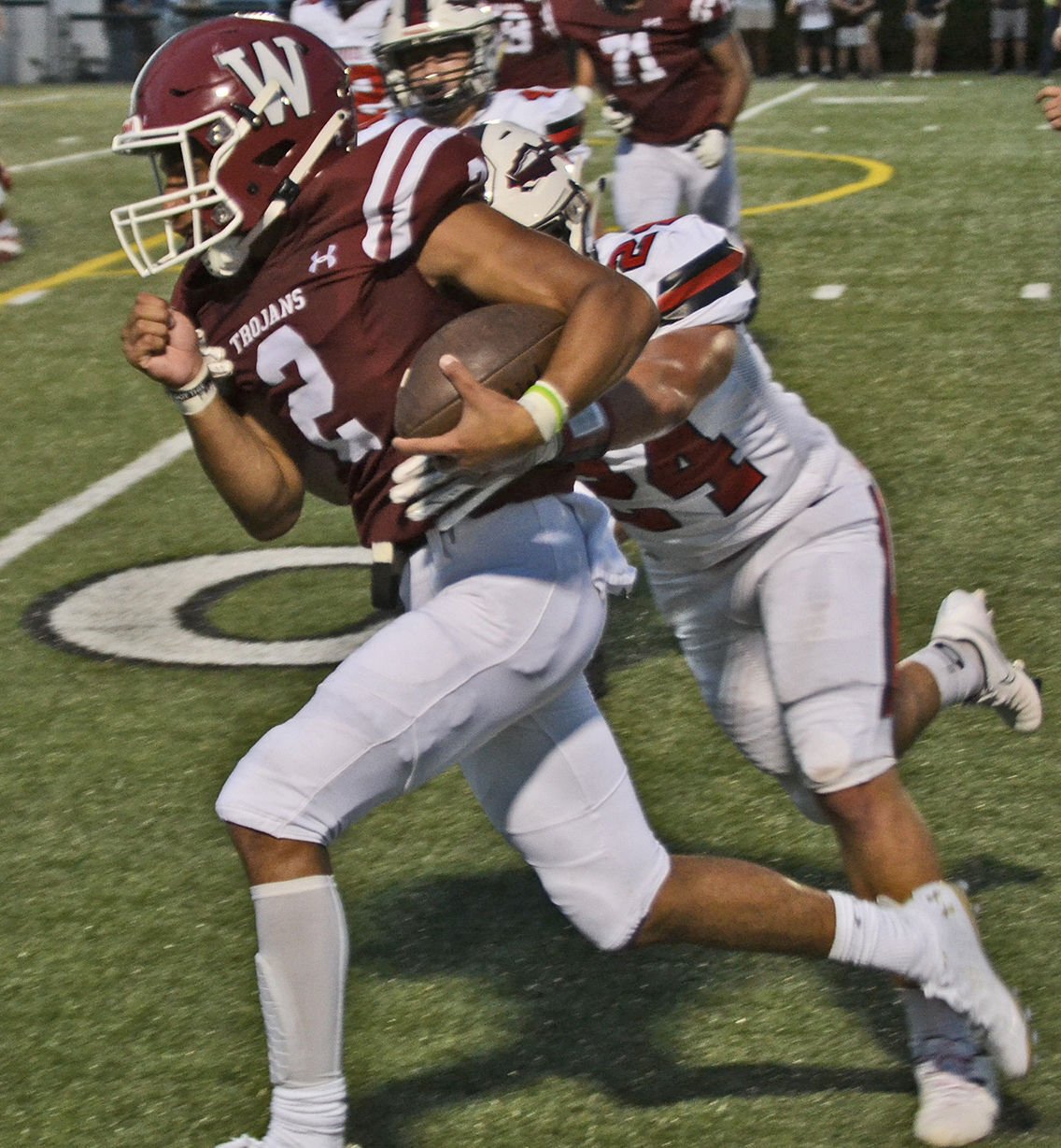 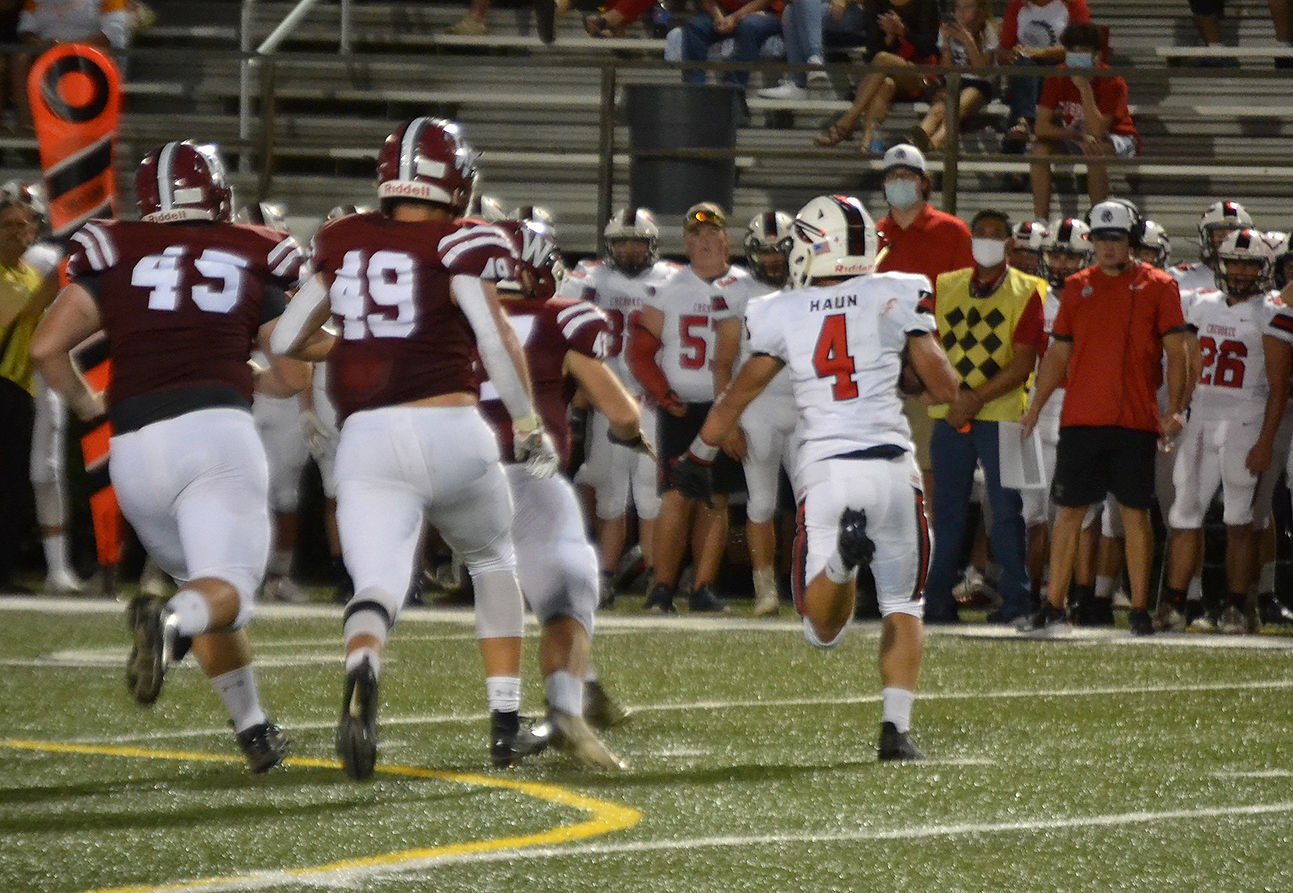 Cherokee’s Tater Haun (4) takes off on a 52-yard run in the second quarter against West Friday. 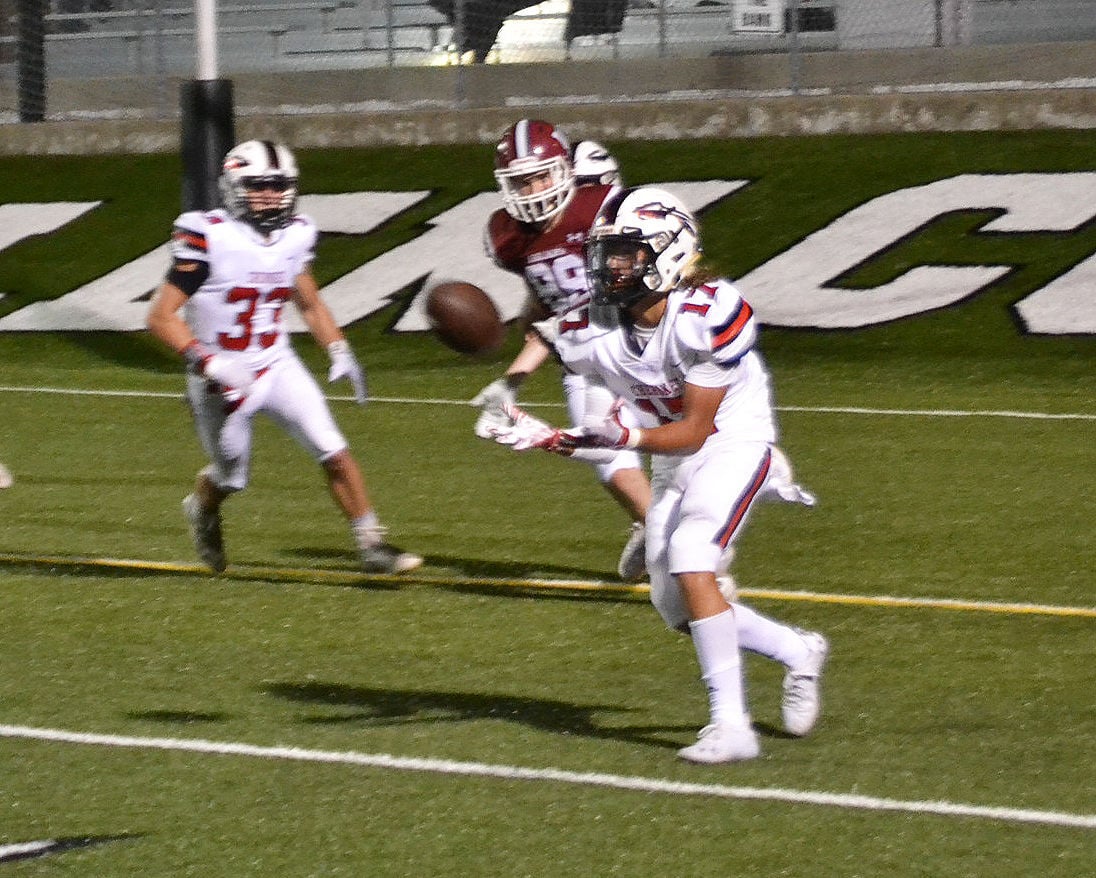 Cherokee defensive back Aidan Webb (17) hauls in an interception late in the second quarter against Morristown West. 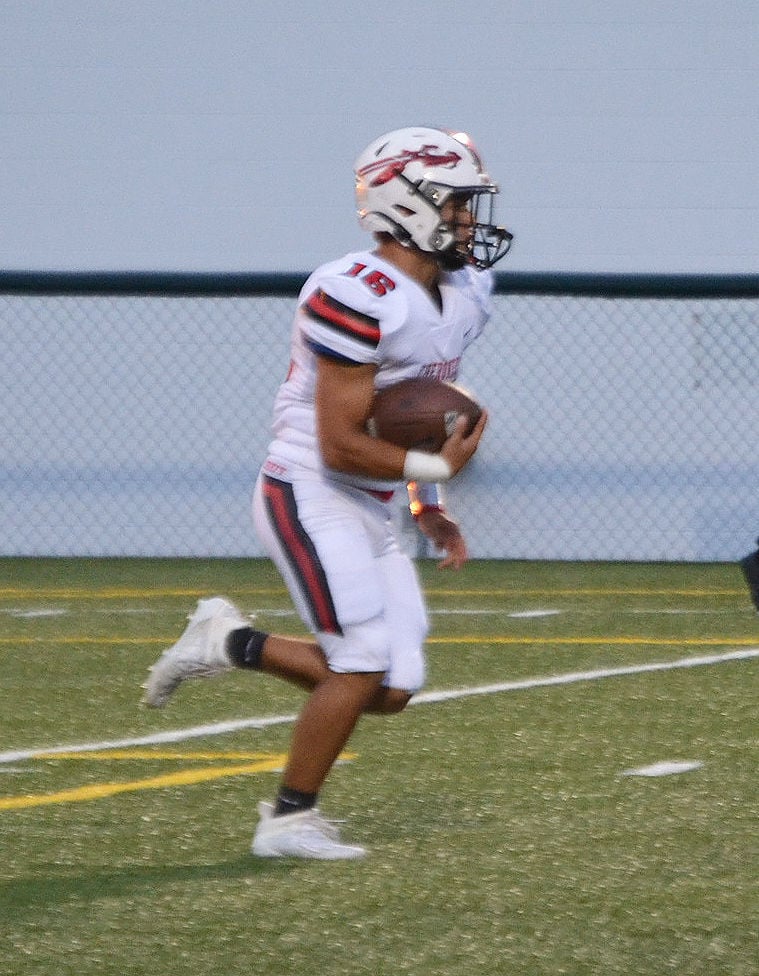 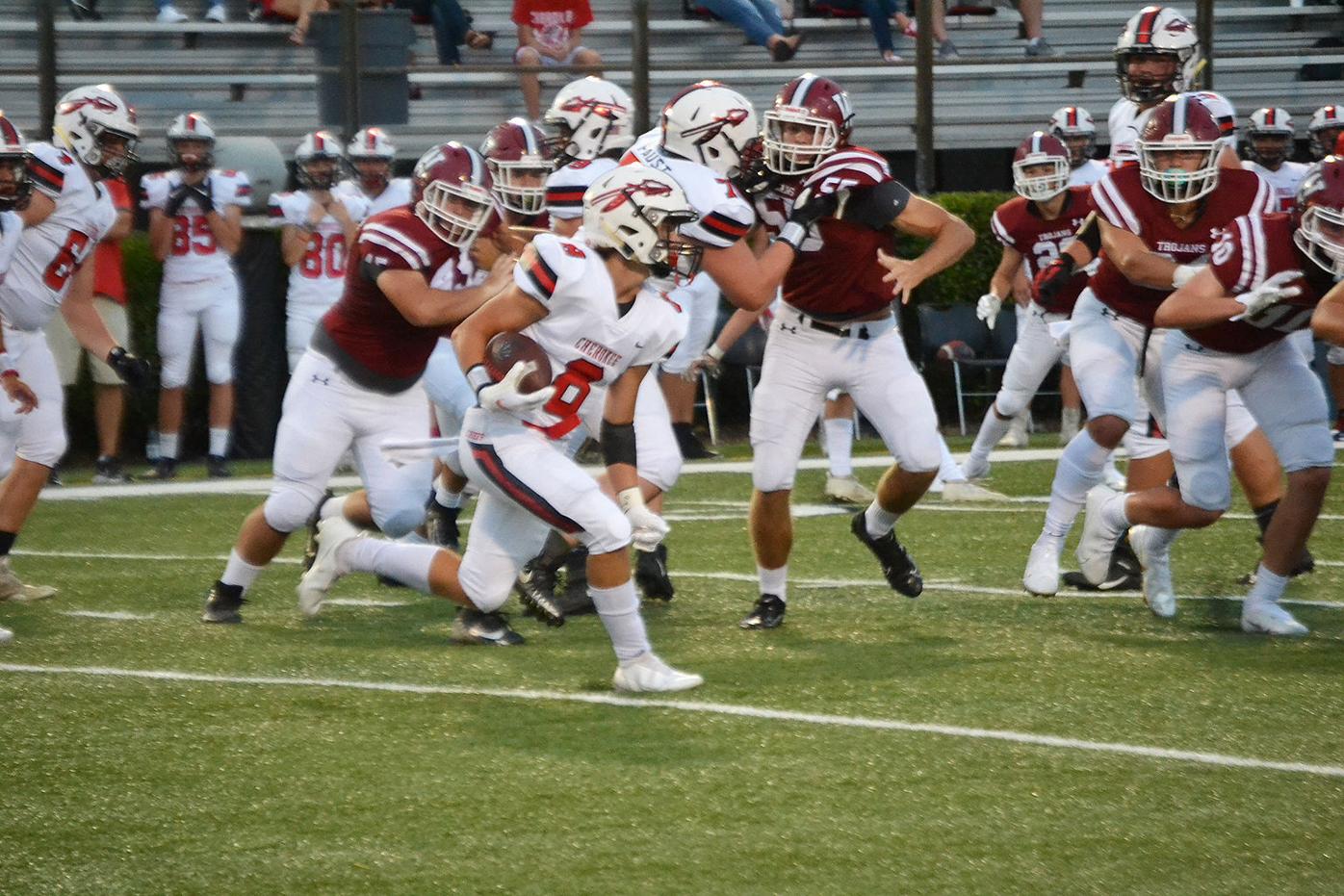 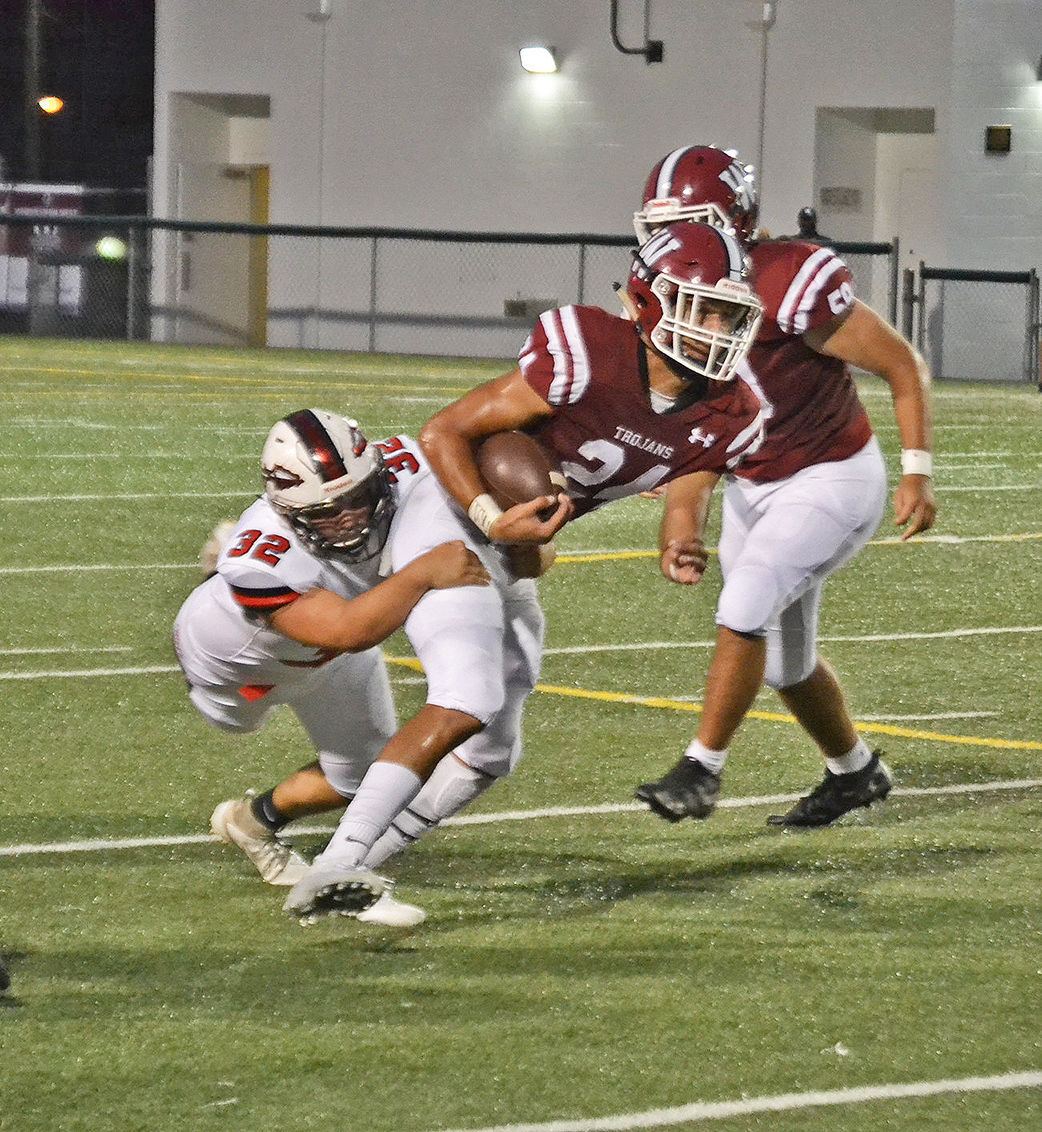 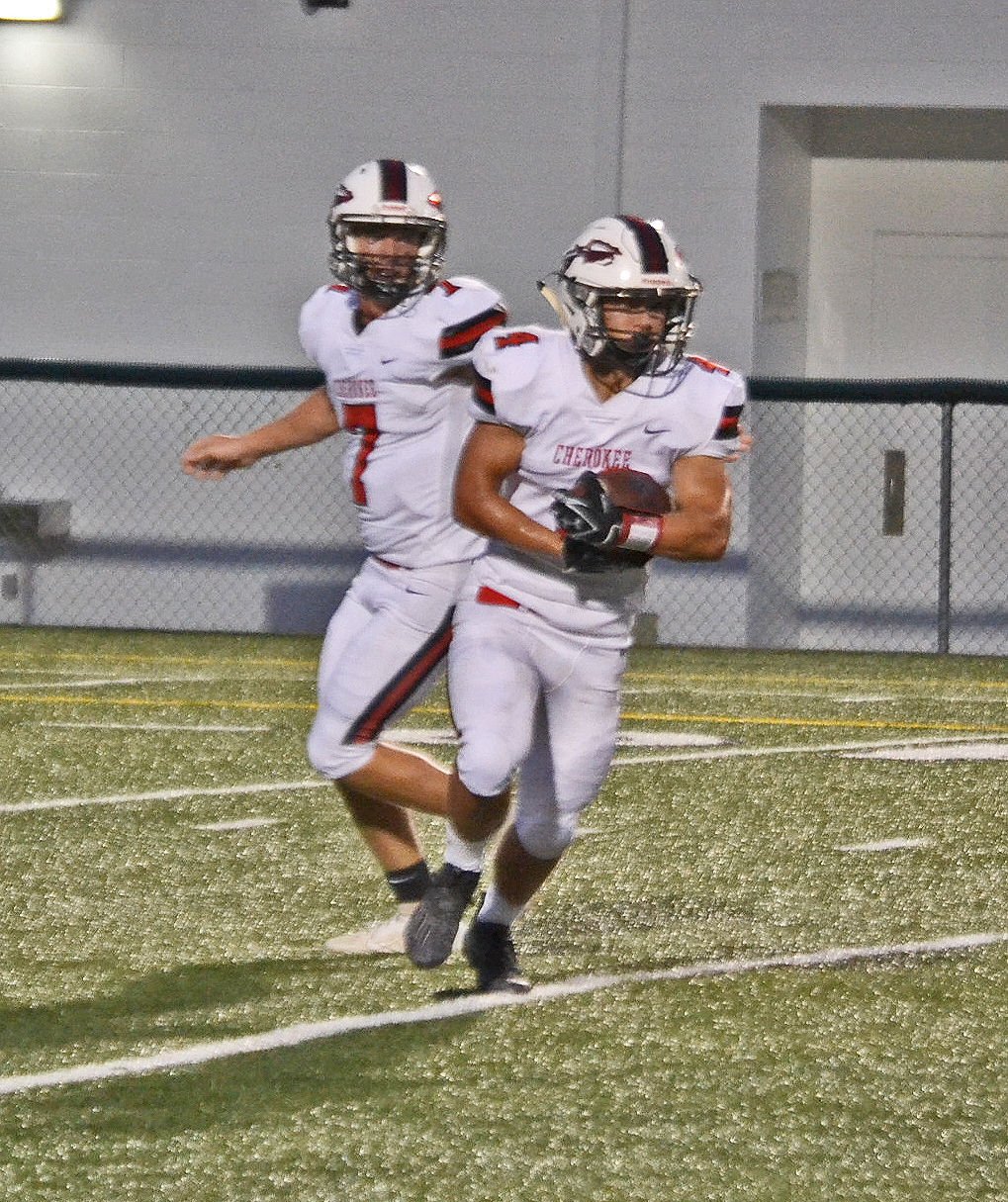 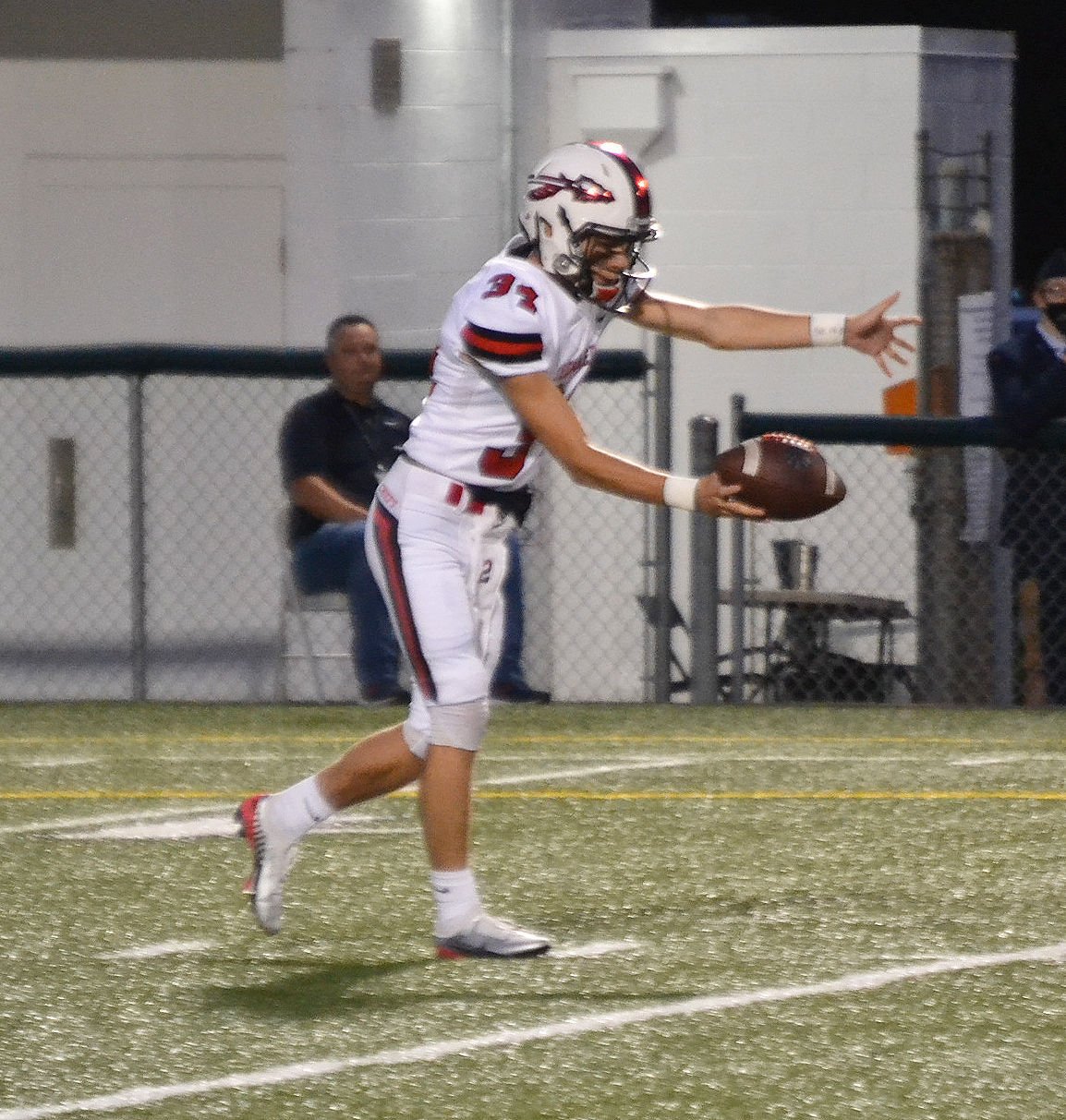 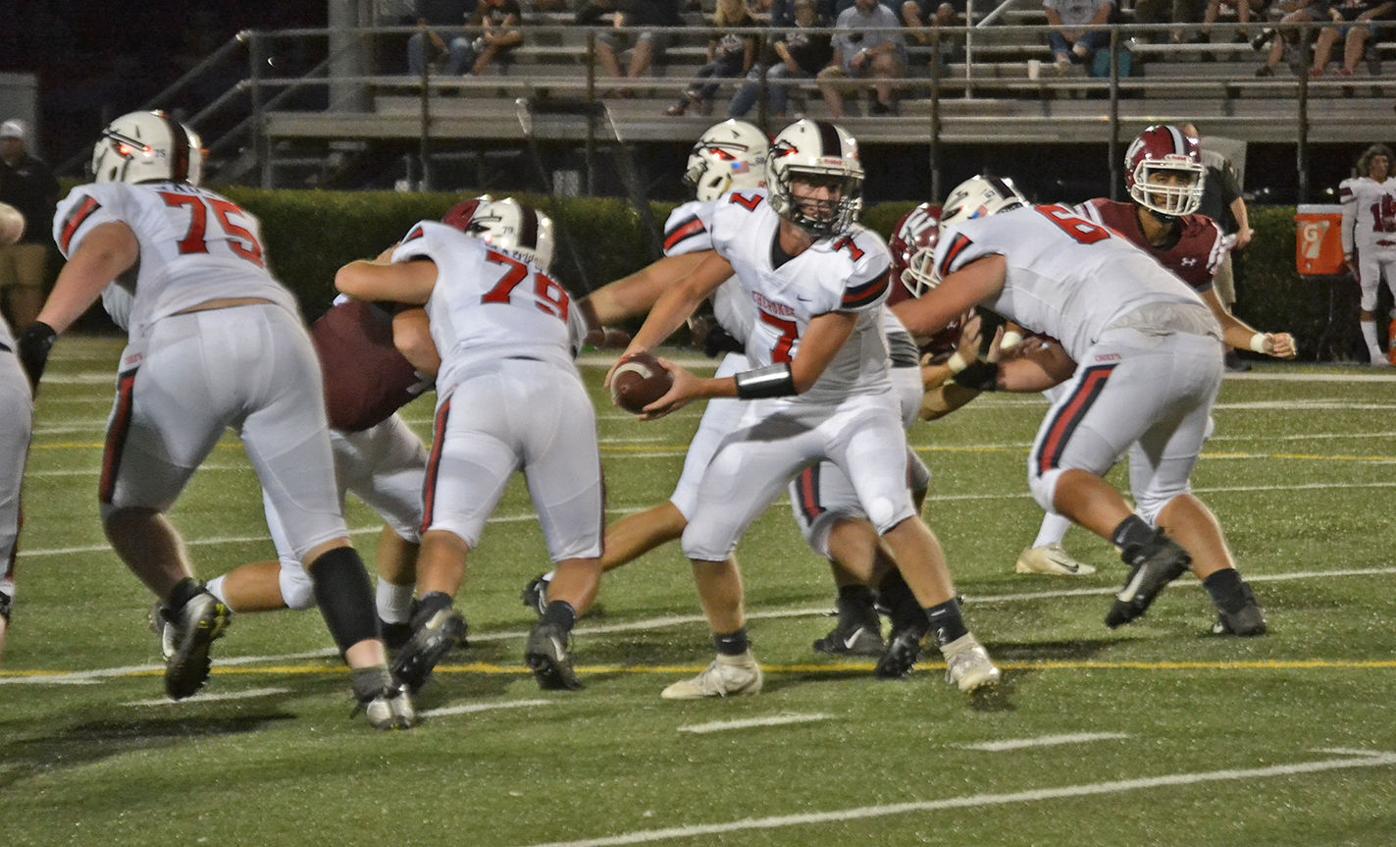 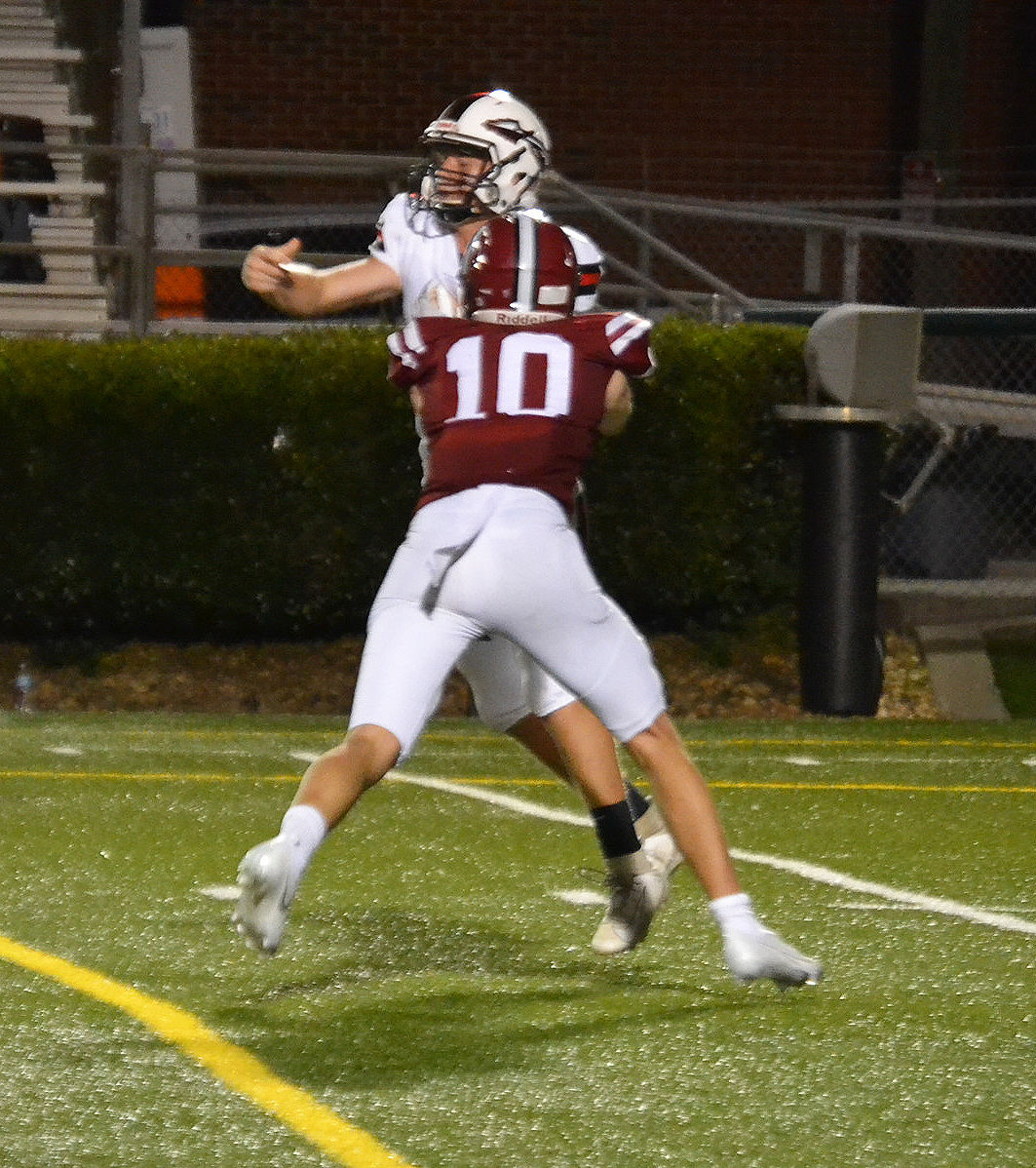 Cherokee’s Tater Haun (4) takes off on a 52-yard run in the second quarter against West Friday.

Cherokee defensive back Aidan Webb (17) hauls in an interception late in the second quarter against Morristown West.

MORRISTOWN – Cherokee started well a couple times in the first half against Morristown West but stalled, and the Trojans took advantage, turning a hard-fought first half into a 35-0 romp at Burke-Toney Stadium Friday night.

West junior tailback Hunter Delaney rushed for 184 yards and three touchdowns and senior quarterback Dylan Cribley completed 13 of 18 passes for 139 yards and two touchdowns to lead the Trojans’ offense, while the defense tightened up to hold Cherokee to 121 total yards and stopping the Chiefs five times out of seven on third-down conversions.

It didn’t start out that way.

The Chiefs moved from its own 25 to the West 36 on its opening drive, eating up half the clock and converting three first downs, including one on fourth down, before having to punt it back to the Trojans.

“We were moving the ball down the field,” said Cherokee coach Jason Lawson. “We mixed things up quite a bit. We were going inside, outside, trying to throw the ball a little bit.

“We didn’t have much luck in passing the ball tonight. We’ve got to do a better job of that. The guys played hard. They came out and we executed early on,” Lawson said.

The Trojans responded with a four-and-a-half minute, 82-yard scoring drive, keyed by a 32-yard Delaney run and capped by a touchdown pass by Cribley which deflected off a Cherokee defender right into the waiting hands of Jonny Fine.

The Chiefs were unable to move past their own 24 on their next possession and had to punt it back to the Trojans, who started the second quarter with the ball at midfield. Five plays later, Delaney was sprinting down the field for a 31-yard touchdown run and 14-0 lead.

Cherokee responded. After Trent Price’s 37-yard kickoff return to the Chiefs’ 44, Tater Haun – an all-state defender last year as a junior – took a handoff and raced 52 yards to the West four-yard line.

“Tater did a great job running the ball for us,” Lawson said. “We’ve been working with him on offense some. He enjoys getting out there, getting a chance to run the ball instead of chasing it down all the time on the defensive side.

“He did a great job, got some good blocks on the edge out there. He was able to read them, get outside and motor all the way down,” Lawson said.

Unfortunately for the Chiefs, they were unable to punch the ball in the end zone on four rushing attempts, the last stopped just shy of the goal and protested by Lawson.

Morristown West took over at the one and Delaney immediately gave the Trojans breathing room with an 18-yard run.

“It definitely killed our momentum,” Lawson said of the goal-line stand. “We got close, just not close enough.”

The Trojans ate about six minutes off the clock in driving to the Cherokee 30, but the Chiefs defense forced West to turn it over on downs.

Cherokee was stopped on downs and had to punt back to West, which ate up the remaining 2:19 trying to drive 56 yards for a score, but Cherokee sophomore Aidan Webb ended the half with an interception at the five-yard line, returning it 35 yards for the final play of the half.

Delaney’s second touchdown run of the night gave West a 21-0 lead to start the third quarter, which saw the Trojans score twice more – a TD run by fullback Nick Hildebrand and TD pass from Cribley to Hunter Hicks – to make it 35-0.

With the mercy rule running clock, neither team scored in the fourth

After defeating Union County 48-0 in the season opener, Cherokee has now been shut out three weeks in a row.

“We’ve got to keep working, keep our heads up and go on to the next one,” Lawson said.