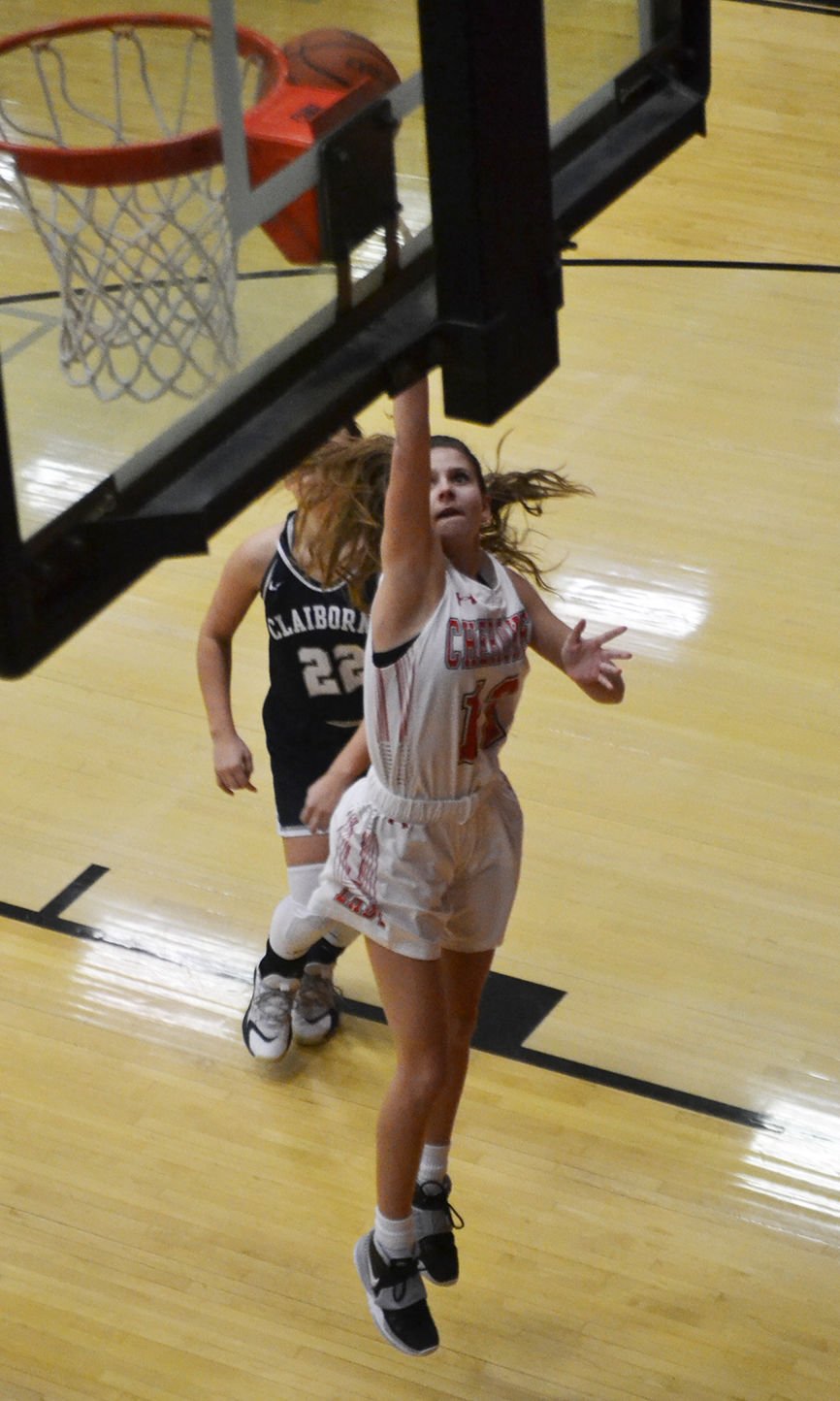 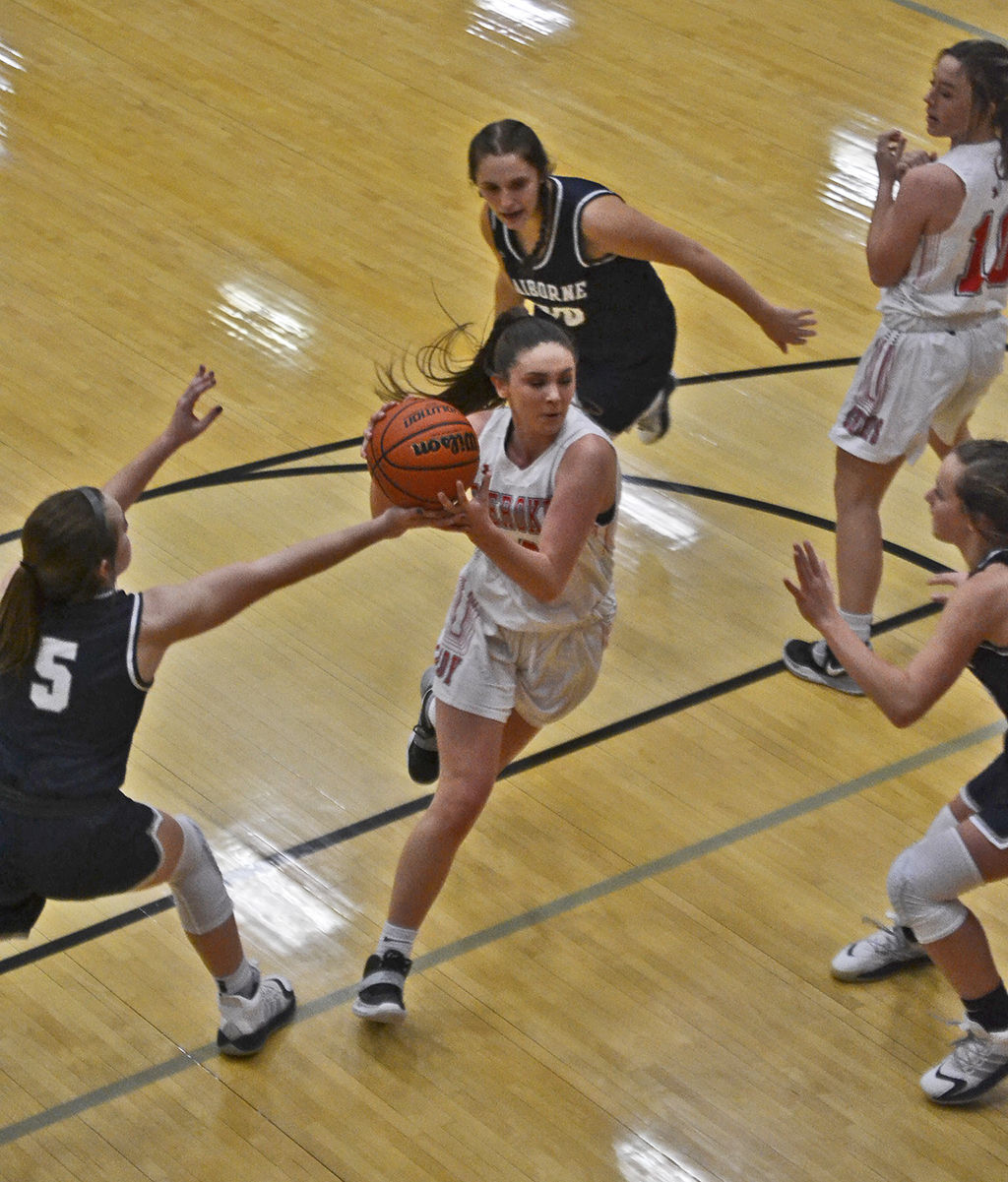 Lydia Alvis (4) drives into the paint for the Lady Chiefs Saturday against Claiborne County. 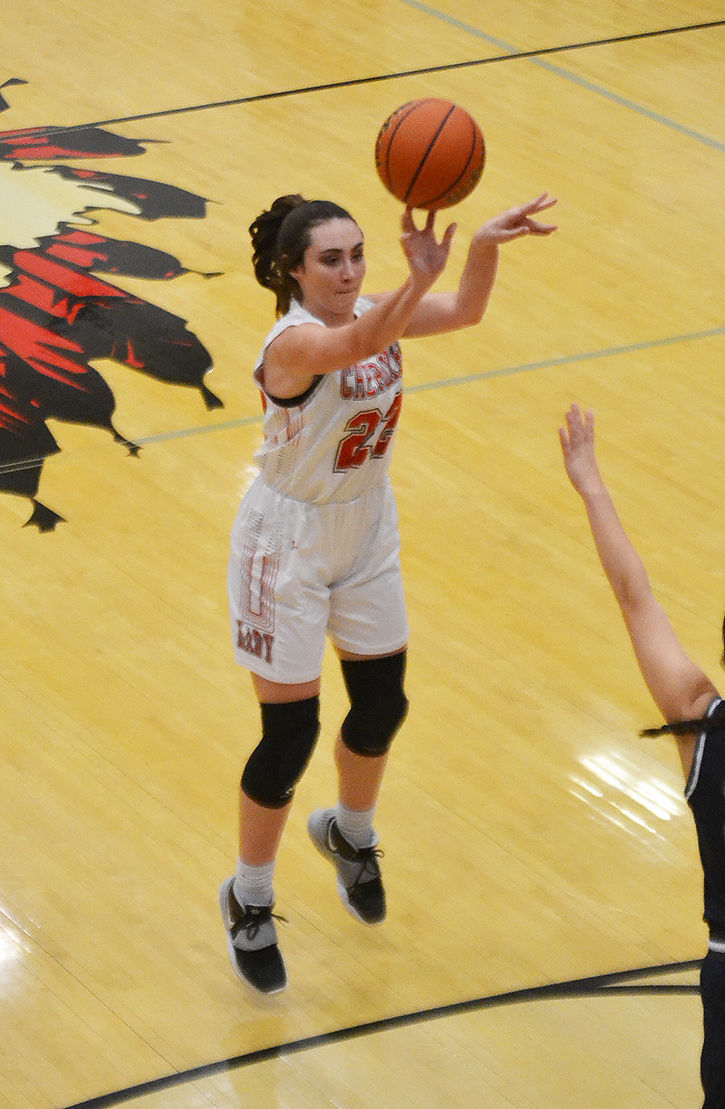 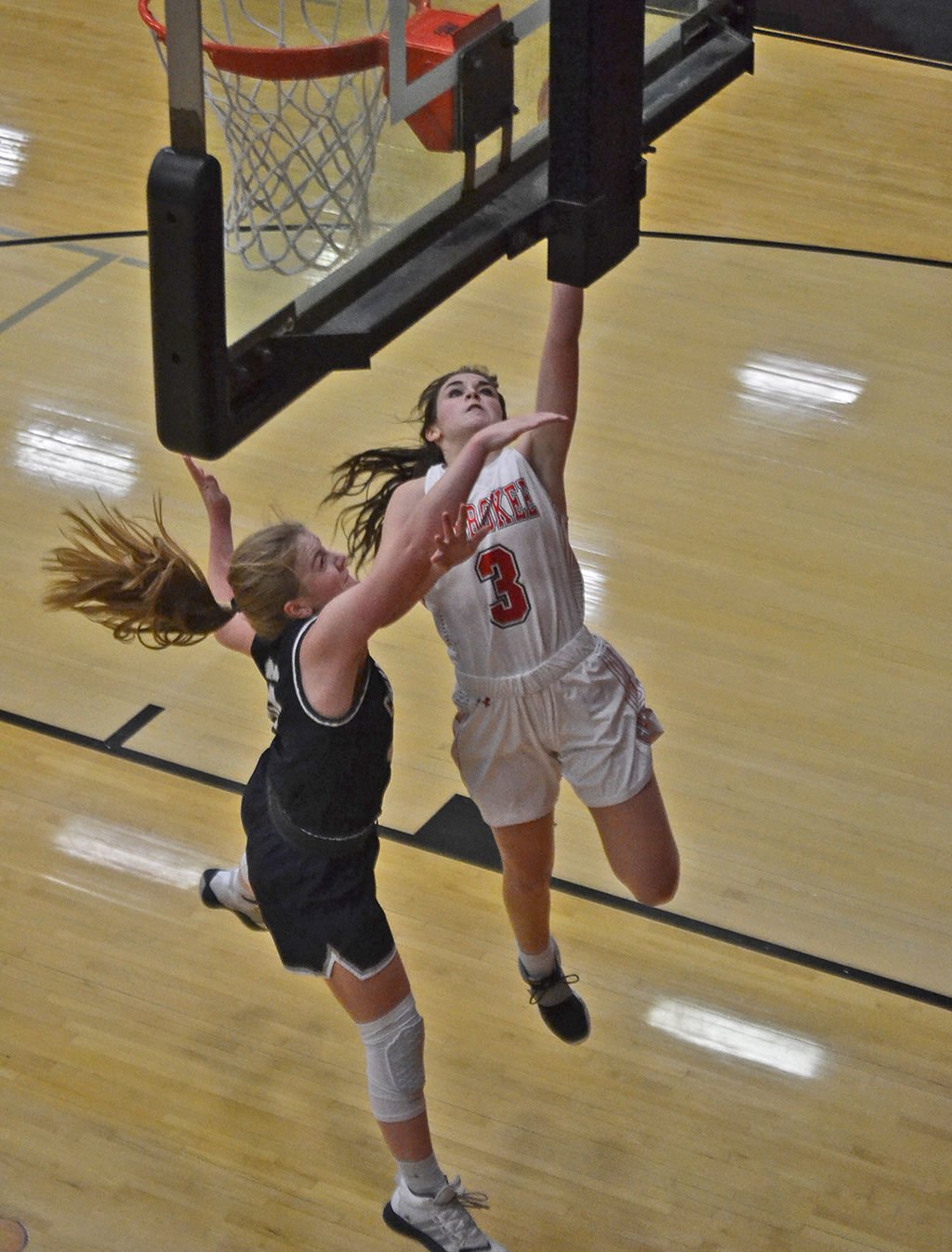 Cherokee’s Macy McDavid (3) drives for a layup against Claiborne. 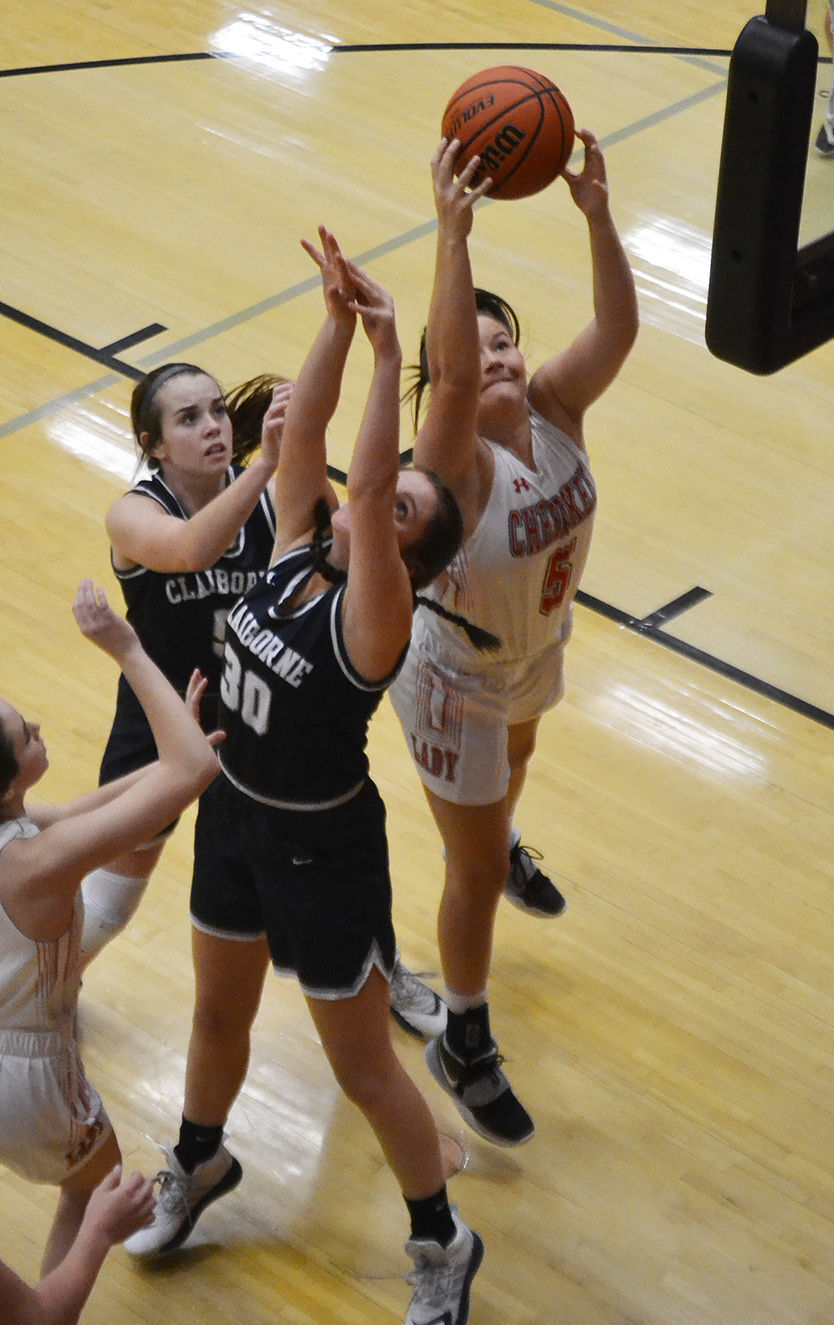 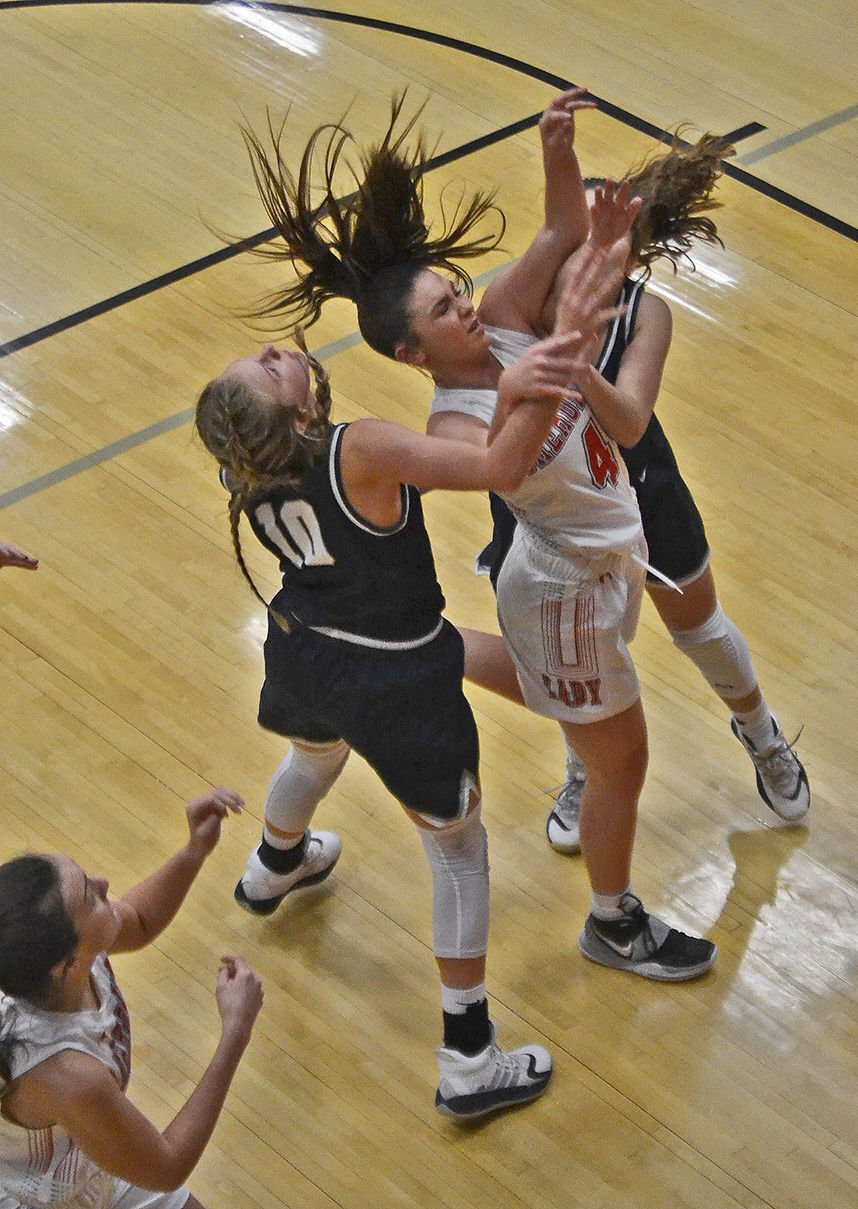 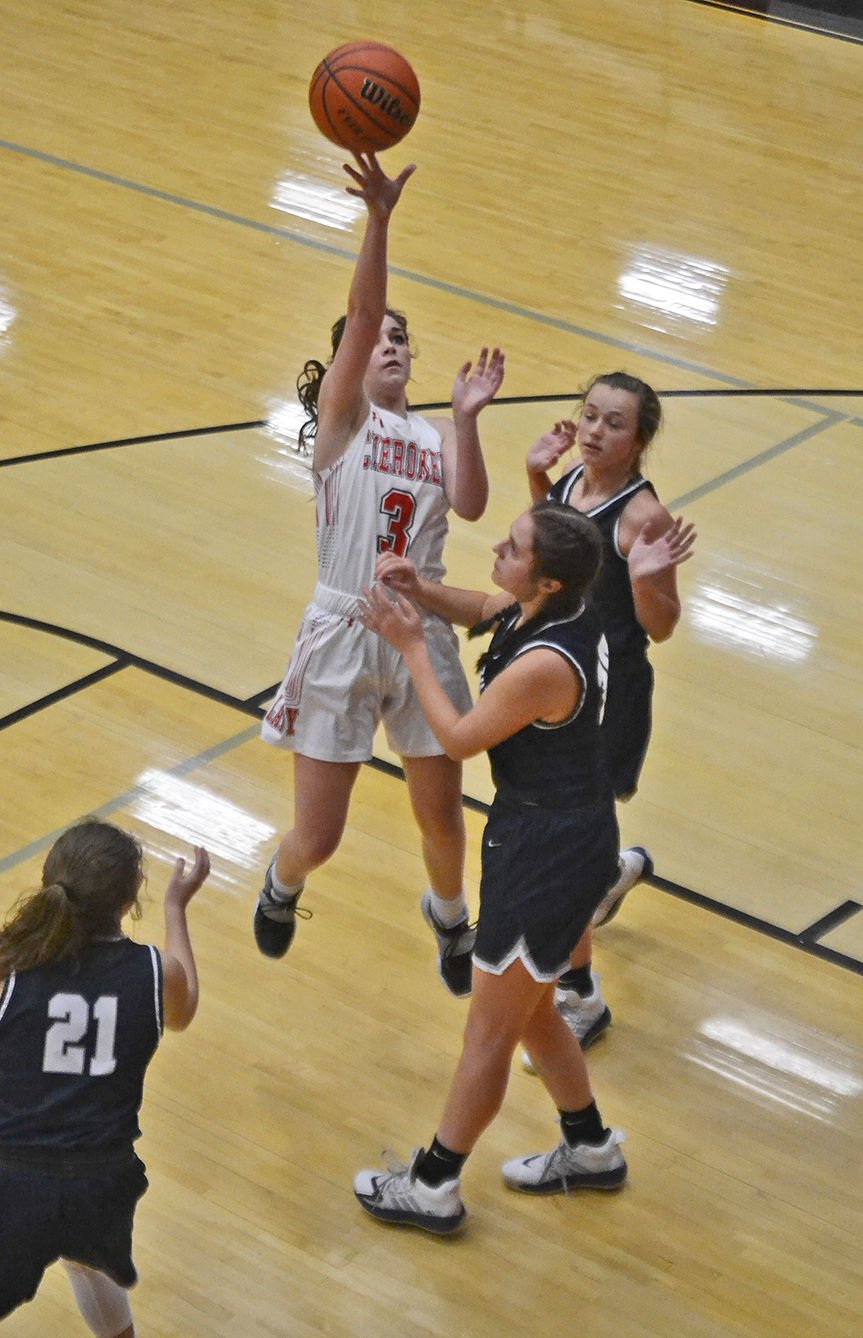 Lydia Alvis (4) drives into the paint for the Lady Chiefs Saturday against Claiborne County.

Cherokee’s Macy McDavid (3) drives for a layup against Claiborne.

ROGERSVILLE – Cherokee played strong out of the gate, built a big lead and never faltered in a 46-32 victory over Claiborne County Saturday afternoon.

“I’m really proud of the girls the way they came out and started,” Cherokee coach Jason Lawson said. “I thought we started the game really well. Some games we’ve come out and have not been very active early on. But I feel like we did a really good job defensively and offensive execution in the first and second quarters. I thought we did what we needed to do.”

“They came out and were guarding us pretty close and that was creating some driving lanes and our girls were able to take them to the rim and were able to convert once we got in there,” Lawson said. “Even when we didn’t convert, we were able to get some rebounds and put back up.”

Buckets by Sam Tilson and Lydia Alvis 1:14 into the third increased the Lady Chiefs’ lead to the biggest of the game, 33-11.

“When your defense can create a lot of offense, we did a really good job of getting some run-outs and getting some easy buckets,” Lawson said. “Part of the defensive strategy going in was to try to create some havoc, get some loose balls and have some girls running up and down the floor.”

Claiborne rallied with a 10-5 run to close the quarter, then pulled to within 12, 38-26, on a three-pointer by Hannah Fugate to start the third quarter, but the Lady Chiefs kept them at bay, outscoring the visitors, 8-6, down the stretch.

“I thought we had a little lull in the second half,” Lawson said. “But I’m really proud of our girls, getting up early on a Saturday and coming in and playing under these circumstances. I felt like they did enough to achieve the result we got tonight.”

There was no letdown after Cherokee’s emotionally-charged comeback win over Tennessee High Tuesday.

“It can happen very easily,” Lawson said. “That was one of the keys. We talked about it before the game, to have a good start. We got the good start. We’ve just got to keep it for the four quarters. We’ve got to keep that focus. Hand it to Claiborne County.

“They came out and made some shots. We were gambling a little bit on defense. We were shooting some passing lanes. They came out and spotted up and were able to make those wide-open shots. That’s what you’ve got to do against a trapping-style defense,” he said.

“All in all, we held them to 32 points. Overall, a good effort to keep things rolling in the right direction. We’ll just keep working,” Lawson said.

Fugate led all scorers with 17, including five three-pointers. Cherokee had a balanced attack with eight Lady Chiefs scoring, led by Alvis, Kaylan Henard and Macy McDavid with eight points apiece. Tilson and Destiny Jarnigan had six each.

I’m really proud of our girls. We’re just going to take it one day at a time, keep working, keep getting better. We’ve got a tough week next week,” Lawson said.