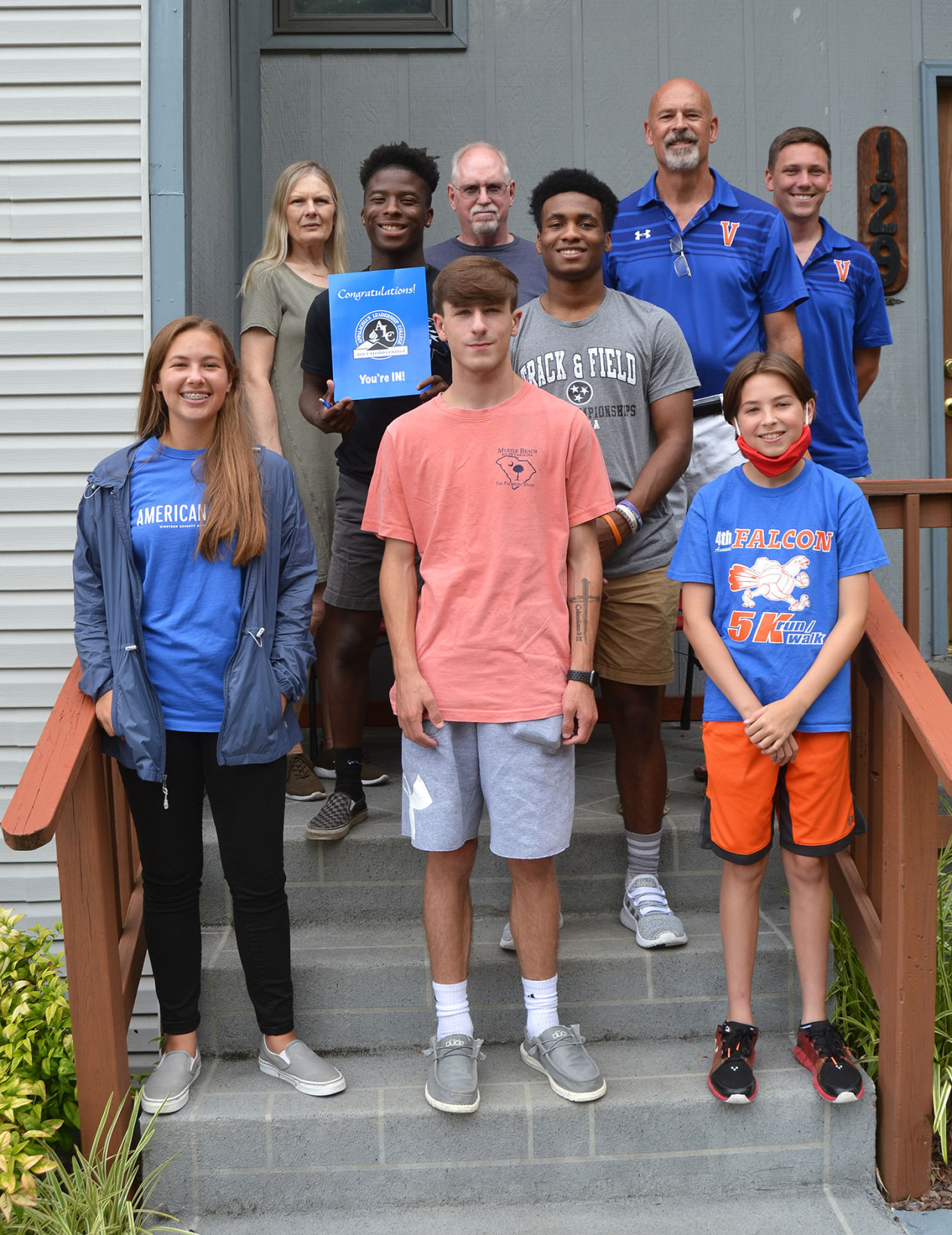 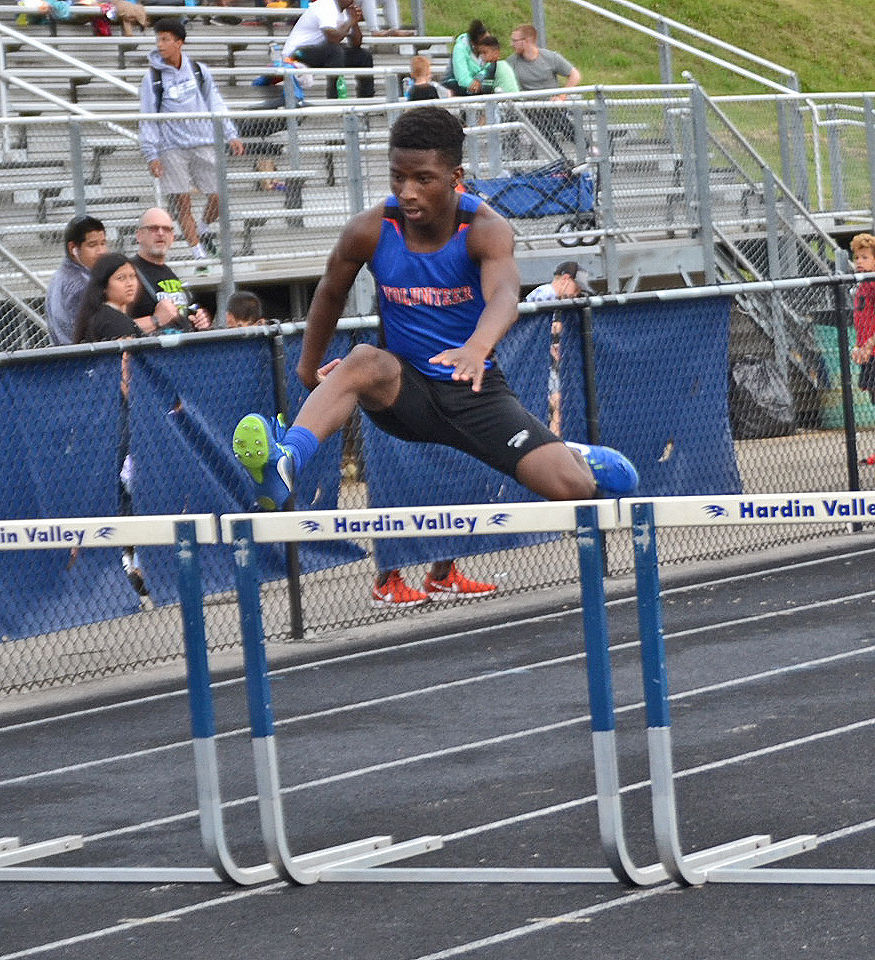 Andres Harless competes in the 300-meter hurdles during the 2019 Sectionals May 11, 2019 at Hardin Valley Academy.

Andres Harless competes in the 300-meter hurdles during the 2019 Sectionals May 11, 2019 at Hardin Valley Academy.

Harless gathered with family, friends and Volunteer track coach Jim Ailshie at his home Monday for a signing ceremony.

The decision to consider Alice Lloyd came about when Volunteer teammate Andrew Murph opted not to run track beyond high school.

“I was talking to Ailshie in the gym one day and he was talking to me about Murph pulled out of going to track and he offered me to go look at the campus and I was like, why not? He didn’t really want to run in college. I was already talking to Milligan,” Harless said.

He liked what he discovered at Alice Lloyd and now will be going there fulltime Aug. 13.

Harless is a good example of a hard worker. He may have not been the star of any of the three athletic teams he was on at Volunteer, but he worked hard and contributed to each.

“I did football, wrestling and track,” Harless said. “I was always doing something.”

“Andre’s been great,” said Ailshie. “He’s been a participant in track and field for four years. He’s had a lot of success in not only the hurdles but the relay events. You could always depend on Andre at every meet. He was just great to be around and work with.

“I hate to see him go, but I’m glad he’s continuing to pursue track and field because I think he’s got so much more potential if he were to train and work fulltime in track and field,” Ailshie said.

“If it wasn’t for him, I probably wouldn’t have stuck with track,” Harless said of Ailshie. “I love the sport, but he just kept me going in the right places and have the right mindset. My first year he put me in everything. I didn’t even do hurdles until my sophomore year.”

It was in the hurdles event that Harless began separating himself from other competitors – and other sports.

After discovering hurdles was his event, Harless concentrated his training more on the event.

“I just like jumping over them. It’s relaxing to me. I don’t like running into them, because if I miss, it hurts, plus it’s over. I’ve only tripped once and that was in practice right before sectionals,” he said.

Harless said the high hurdles requires more attention to steps between hurdles than the 300 hurdles, his preferred distance.

“He was a great 300 hurdle runner,” Ailshie said. “He was fearless and you have to be that way in order to compete in hurdles. He could exchange lead legs and the one thing, he never really worked on the endurance part of that particular race because he was always coming out of wrestling and as soon as he came out of wrestling, we would go ahead and just start competing. It would take him a while to get his legs underneath him and always by the end of the season, he was running his best.

“For example, we went to Virginia High at the end of his junior year and there were a lot of really good teams out of Virginia, and he won the 300 hurdle event. I think he ran 43.60. I was glad to see him win that race. There were a lot of folks that were watching that meet that night. So, he gained a lot of confidence there,” Ailshie said.

“Then at the beginning of this past year, he won that meet over at Cherokee. It had been raining and it was windy. He ran 45 seconds in his first meet out. Projecting out if the year had continued forward in outdoor track, who knows? He had an outside shot at qualifying for the state,” Ailshie said.

“One thing with him going to Alice Lloyd, when you go and move up to the collegiate level, you also move up in distance in the intermediate hurdles. So, he’ll go from 300 hurdles to 400 hurdles. To be honest, I think that will help him. Because I think once he trains and focuses more on the endurance aspect that he hasn’t had the opportunity to do in the past, I think he will really excel at the collegiate level with the increased distance in the hurdles,” Ailshie said.

Harless has already been working on the 400.

“I’ve been doing the 400 the last year because I knew I was going to be doing it and I wanted to get used to it,” he said.

At Alice Lloyd, Harless said, “I’m going to do hurdles, but I can do anything from 800 on down. Hurdles is my specialty.”

Friend and former teammate, Chris Strickland, will be waiting for him at Alice Lloyd, where he is a member of the track team, as well.

“With Chris going up there, he will have some familiarity with someone else on the team,” Ailshie said. “That’s kind of neat to see that we’ve sent two from off the team from this past year up there. It’s a fairly new program in track and field in the NAIA level. There will be some good competition.”

Although Alice Lloyd is an NAIA school, in track, athletes measure themselves against time and distance, so they’re really competing with everyone in all programs, no matter the size.

“In track and field, you can go as far as you want to go based on times,” Ailshie said. “He could still get to the highest level being at Alice Lloyd. It’s all versus the clock.”

Ailshie is among the people Harless credits as positive influences in his life.

“Definitely my coaches, Sam Barton, Ailshie, all the coaches who have helped me run, and my family. They’ve motivated me and told me what to do, and a lot of my friends, like Kamdyn (Lee), I’ve run against him since second grade and he’s told me a lot, too,” said Harless, whose major is already decided.

“Criminal justice and law enforcement,” he said. “My goal is to be on the SWAT team. I’ve always wanted to be a police officer. I thought it was cool. I started looking up different parts of being a police officer and I thought I’d love to be the person to batten down stuff.”

As far as remembering what will stand out the most during his time at Volunteer, Harless said, “Probably that I was a multi-athlete and I always did my job. I had a good work ethic at it.”

That work ethic has carried him to the next level at Alice Lloyd. Where he goes from there depends on how well he clears his next set of hurdles.