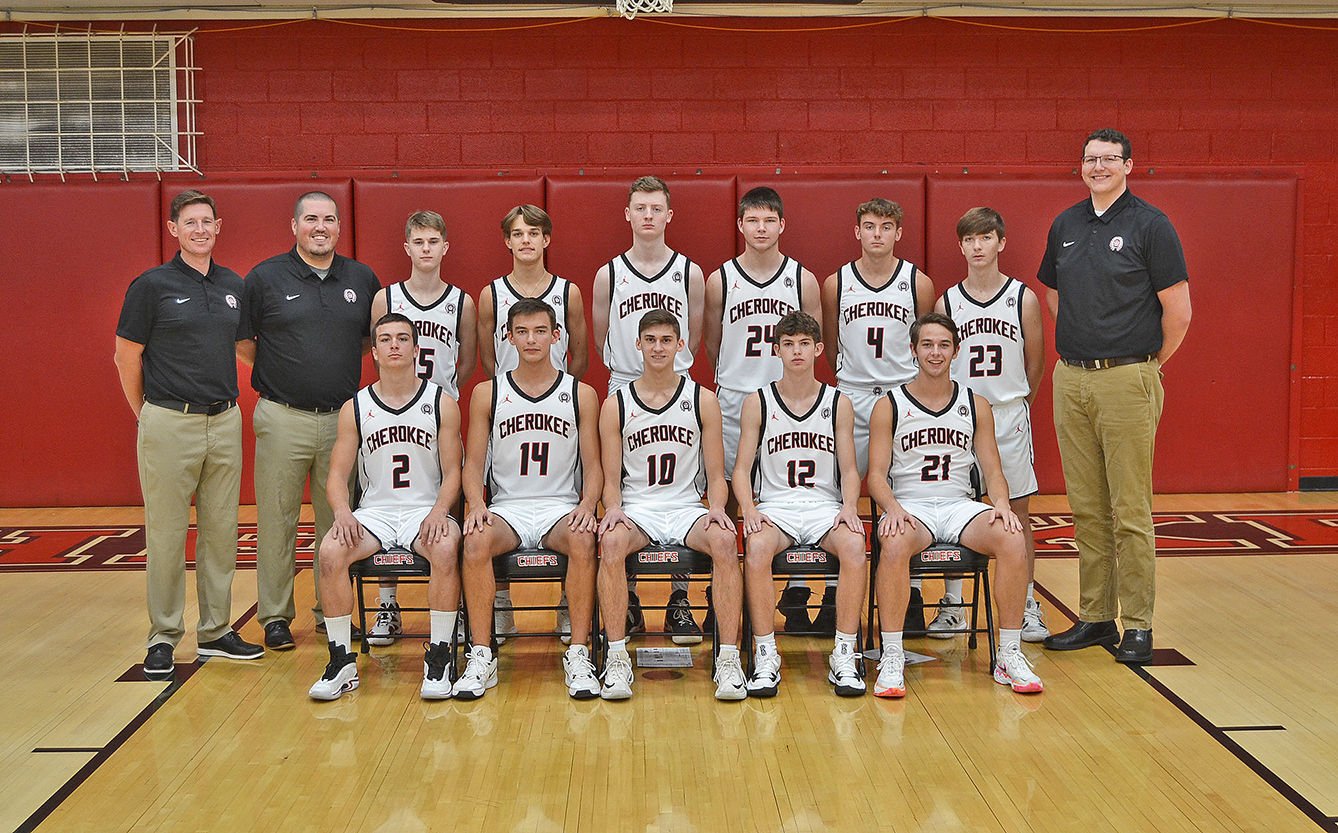 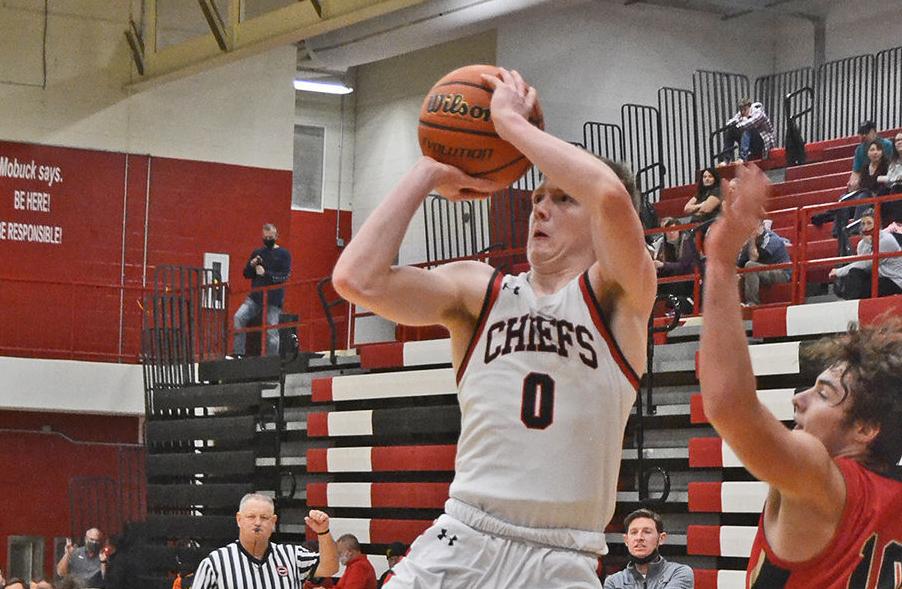 Cherokee’s most reliable scorer, Carter Metz (0), has transferred to Dobyns-Bennett. 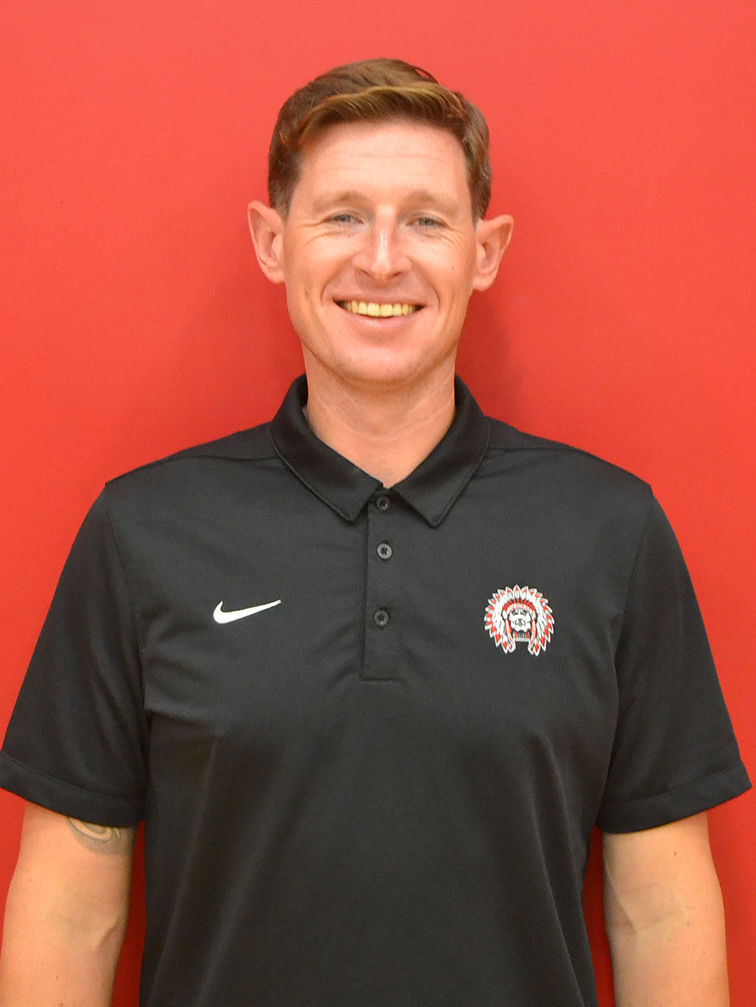 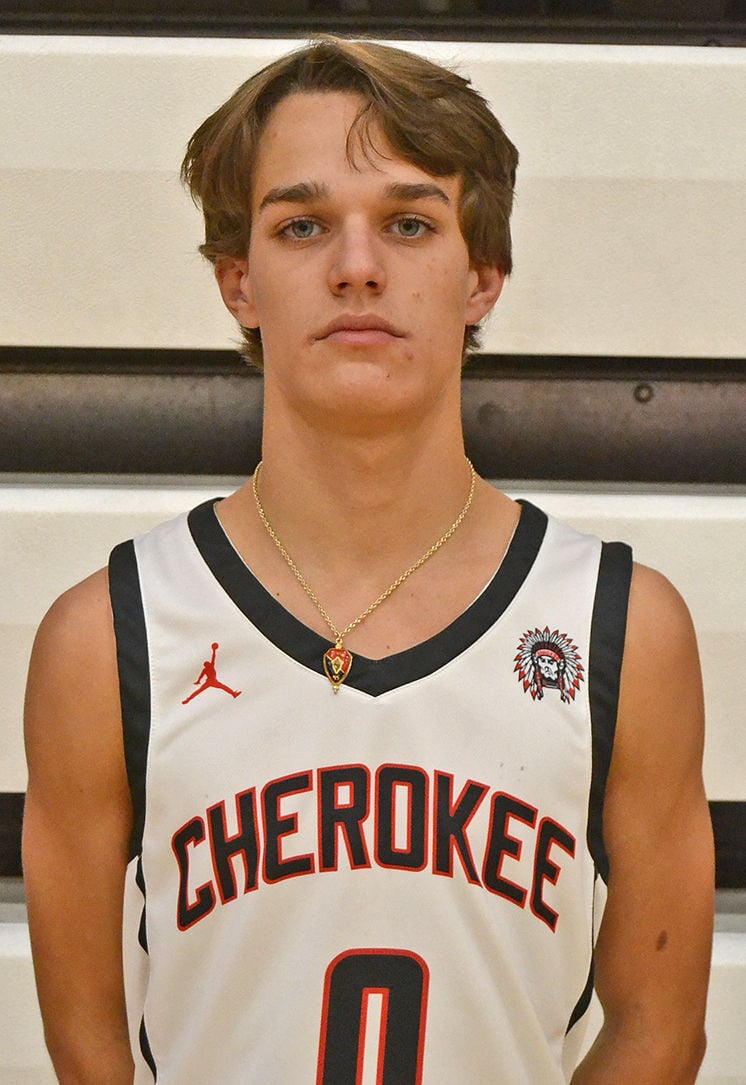 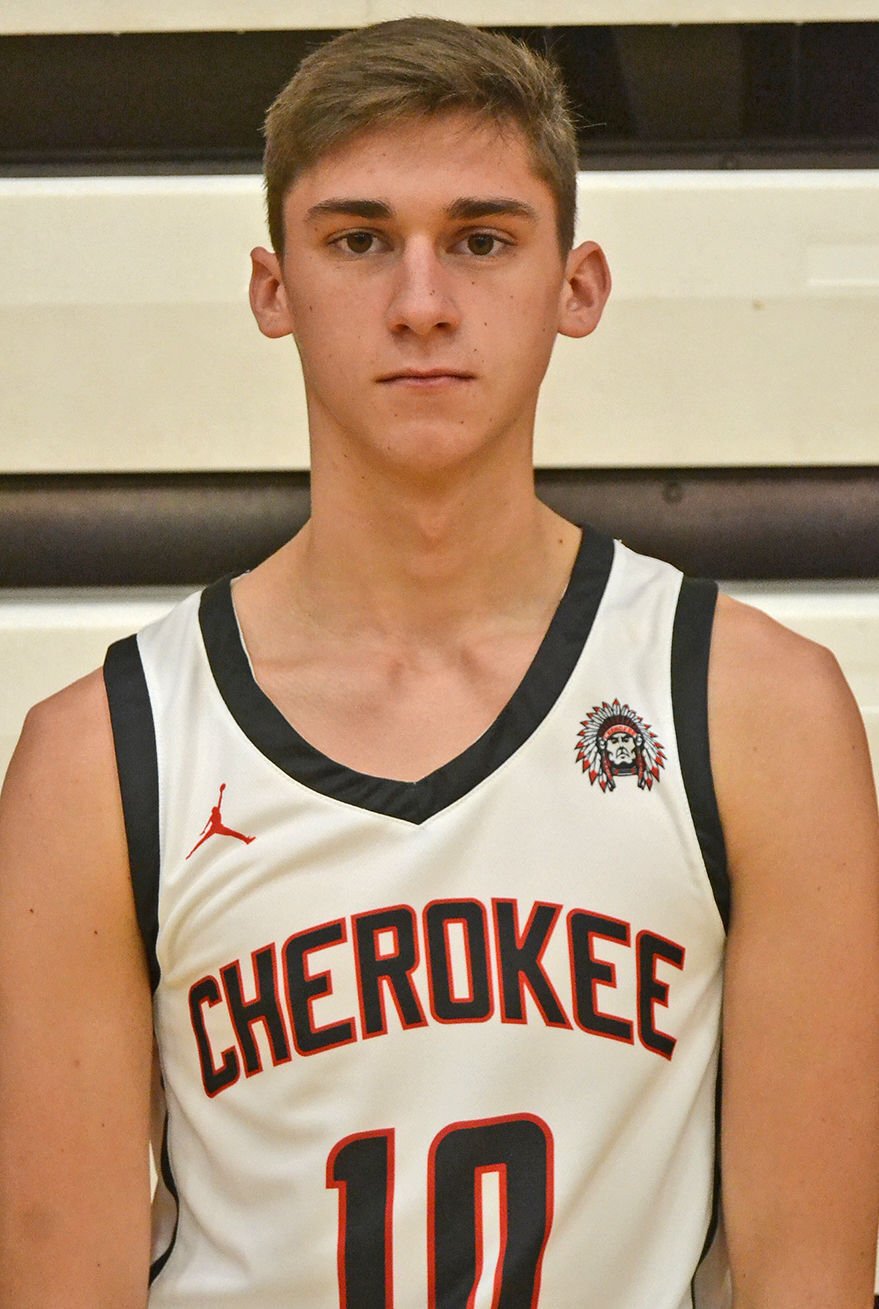 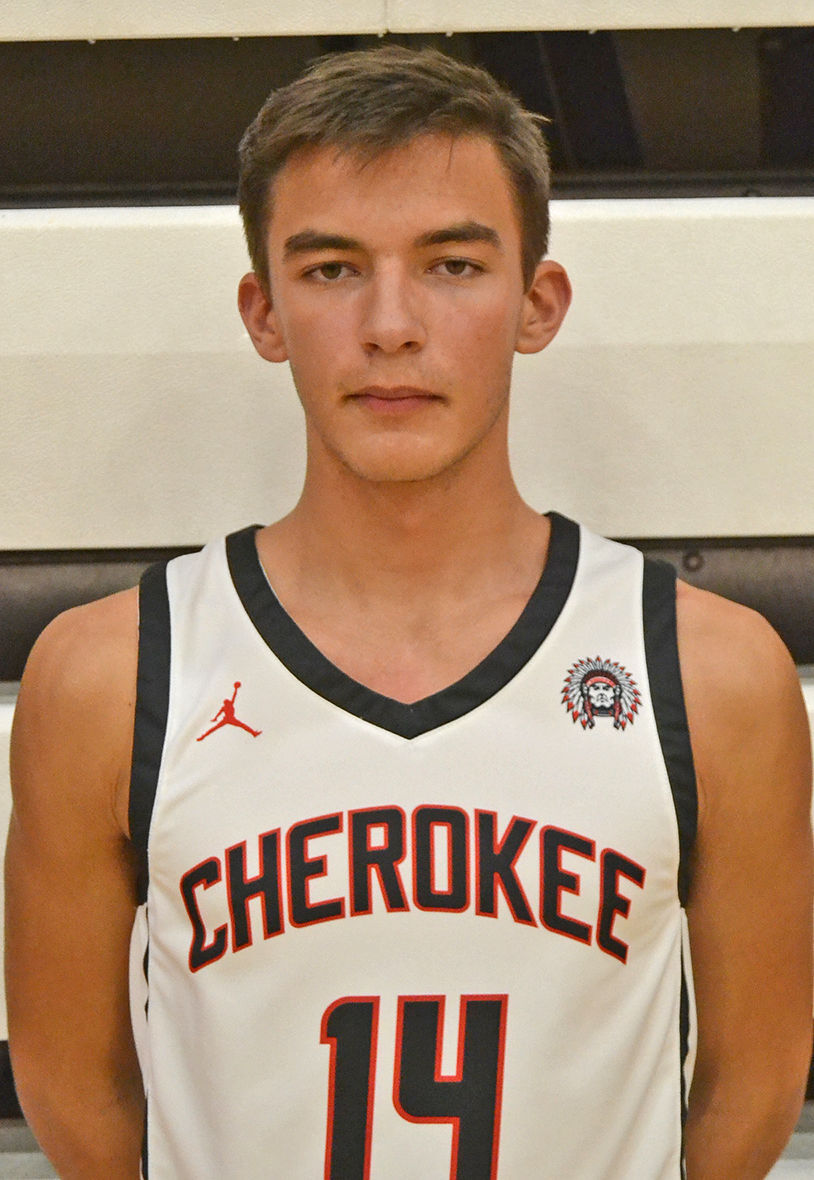 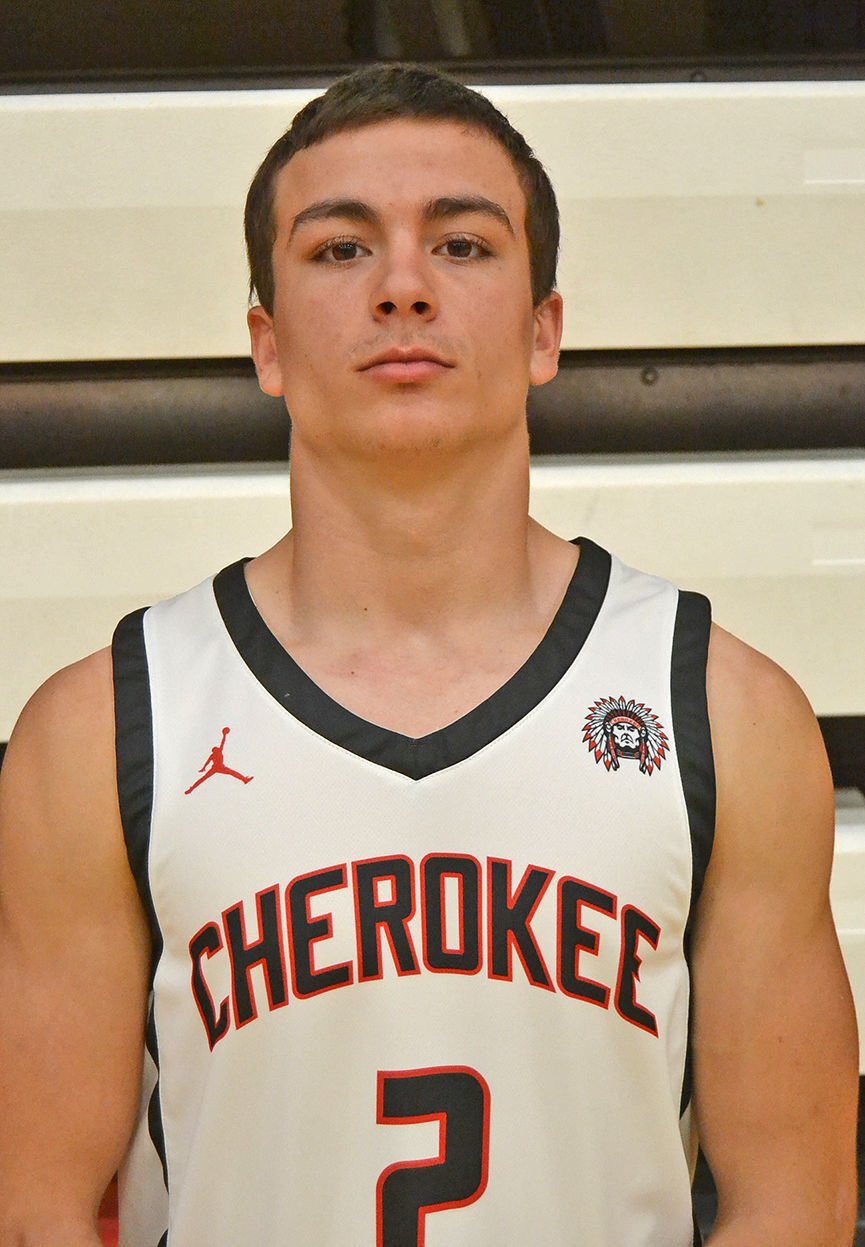 Cherokee’s most reliable scorer, Carter Metz (0), has transferred to Dobyns-Bennett.

ROGERSVILLE – It’s never been easy to coach Cherokee boys basketball. For years, the Chiefs have had to play in conferences that included schools more than twice Cherokee’s enrollment.

“He went to Dobyns-Bennett and I’m hoping the best for him,” said Trey Fields, beginning his third season at the Cherokee helm. “I didn’t want to lose him, but I hope the best for him.”

Counting Metz and the four departing seniors, Cherokee loses almost all of its varsity experience.

“We’ve got four seniors and two juniors, only one who will be on varsity. The rest are sophomores,” Fields said.

Besides Ryan, Drinnon and Mowell, Brayden Leech makes up Fields’ senior group. Joey Henley and Brysen Hancock are the team’s only juniors.

“We’ve always had pretty good numbers from each grade, whereas this year Joey Henley is the only junior who’s on varsity right now,” Fields said. “Joey will play valuable minutes for us. I’m super-excited about him. He plays like he does in football. He plays as hard as he can, just plays extremely hard. And he’s a first-class kid, too. He’s a leader. He’s a role-player.

“The good thing is they’re great kids and they work really hard,” Fields said. “Everybody’s trying to find what they can do, their roles, and who they are.”

Fields has a good idea of who will begin the season as the starting five.

“Colton McLain will be the starting point guard as a sophomore,” Fields said. “He’ll play a lot of valuable minutes. Chandler Drinnon and Colin Ryan will be the 2 and 3. Joey Henley and Conner Mowell will be the 4 and 5.”

Based on the personnel, Fields said the Chiefs will play more up-tempo this season.

“We’re going to play a new style, speed up a little bit, and try to play some pace game,” he said. “Everybody is about the same height and we don’t have anybody who plays with their back to the basket. We don’t have anyone that goes at you one-on-one.

“When we kind of looked at this, we said everybody can run. Everybody can shoot. Everybody’s the same kid. Just implement the new system. Everybody finding their role in the style is going to be huge for us this year. We’ve just got a long way to go to be as young as they are. We’ve got a lot to do,” said Fields.

Fields isn’t worried about having a sophomore running the offense instead of the transferred senior. McLain was a good scorer in his own right at Rogersville City School two years ago and last season as a freshman on the Chiefs junior varsity team.

“It’s going to be a challenge for him, but the good news is the new conference: he should fit right in,” Fields said. “He’s going to take some lumps and he’s got a long way to go, but I’m excited because Colton is so young. Then we’ve got HL Charles, Isaac Chandler, Elisha (Jones), Bryce (Elliott), and Jayden Ward, a bunch of young kids that will step in and guard – all sophomores.”

Cherokee has a strong infusion of ninth-graders into the program.

“The younger group has nine freshmen,” Fields said. “We’re not having a freshman team. They’ll all be on JV. That way we can all practice together as one. It’s actually been very helpful.”

“That young group I’ve seen major, major leaps by them. Especially with Rogersville City School not having a season all season last year. You’ve got Manning Brooks and Jaxon Markham and they’ve just stepped right up,” Fields said.

“Bulls Gap is doing a wonderful job right now from top to bottom. Chris Hughes has done a wonderful job. And Rogersville Middle School has sent us a couple kids including Levi Charles, HL’s little brother. He’s one that we’ve been watching from JV to varsity. He has done an absolute wonderful job. He worked on his shot this summer. It’s hard to teach kids to play as hard as he does,” Fields said.

“That’s why I say this new offense could be great for us once we get it in and everybody understands, because you’ve got kids like HL, Conner, Joey, Levi that fly in there and rebound so hard, no matter what the situation. It’s good to see them that way,” Fields said.

“Long story short, those young kids are just going to have to take their lumps and learn how to play, which is good for the future. I’m excited about this basketball team because they are a bunch of great kids that play extremely hard,” Fields said.

“I’m super-excited about it,” Fields said. “I think it’s been a long time coming. It’s something that’s really excited our kids because it’s one of those deals where night-in and night-out, you feel like you can compete. You don’t have to be on your best and expect teams like Dobyns-Bennett and Science Hill to be on their average that night.

“We were playing a school in Science Hill that we’ve played numerous times in school history and we’ve never beaten them. The closest we’ve ever come was when we had Ryan Bledsoe,” Fields said of the 74-70 loss Feb. 8, 2019 at Cherokee.

“Other than that, the closest game was seven points. That makes it even harder to know that that’s in your league. And they should be (in other leagues), with 2,500 kids each at D-B and Science Hill. Daniel Boone with 1,600-1,700 and we’re down here with 1,000. It’s a big difference,” Fields said.

While there’s no Dobyns-Bennett or Science Hill, there is the defending state champs.

“Now, one of the teams in our (new) league, Greeneville, is superior. They’d give Dobyns-Bennett all they’d want,” Fields said.

Playing in Class AA last year, Greeneville went 11-0 in the district, then won the district tournament with wins over Chuckey-Doak and Grainger, and the region with victories over Unicoi, Elizabethton and Sullivan East. After beating Knox Fulton in the Class AA sectional, the Greene Devils defeated Bolivar Central, Upperman and ultimately, Jackson South Side, to win the Class AA State Championship, finishing 31-6 overall.

“I do feel like we can compete with Cocke County and Grainger and Claiborne,” Fields said. “You don’t want to be in a league where you’re just killing everybody. We’re at least now in a league where in a down year we could still finish in the top three. We don’t have to be at the top of our game every night. So, it’s exciting.”

No longer in the same district, Cherokee will still face Volunteer twice in a home (Dec. 3) and away (Jan. 21). The Chiefs also will play a home-and-away series with Chuckey-Doak, Knox Gibbs, Morristown West, West Greene and Hancock County.

Cherokee will also host the Big H BBQ Christmas Bash Dec. 18-22. The district games will be played throughout January and February.

“Plus, the way that they’ve set it up,” Fields said, “we’re a high school that’s been here 41 years and we’ve been to the region 16 times. The way that it’s set up now with five teams, four go. You’ve just got to finish in the top three to guarantee yourself. So that makes it a lot better

“Now, the other district is loaded with Volunteer, Unicoi, Tennessee High, Sullivan East and Elizabethton,” Fields noted of Class AAA, Region 1, District 1, whom District 2 will match up against in the region.

But that’s late February and March and this is November. There’s an entire season to be played.

“The preseason has been wonderful,” Fields said. “The kids have been great. I’ve had zero issues with attendance, zero issues with commitment level. We’ve just got to get our legs under us, shooting, the basics, especially when you get your football kids back.

“We’ve had a couple of injuries. Jayden Ward was hurt in preseason, but he’s stepped up in preseason and worked his butt off. He’s shooting about as good as I’ve seen him shoot,” he said.

“I’m excited about what we’ve got coming. But we’ve got to figure out who we are. We’re going to take some lumps with that much youth. But I still feel like we can be competitive in our league. It’s the first time in many years I’ve felt that,” said Fields.