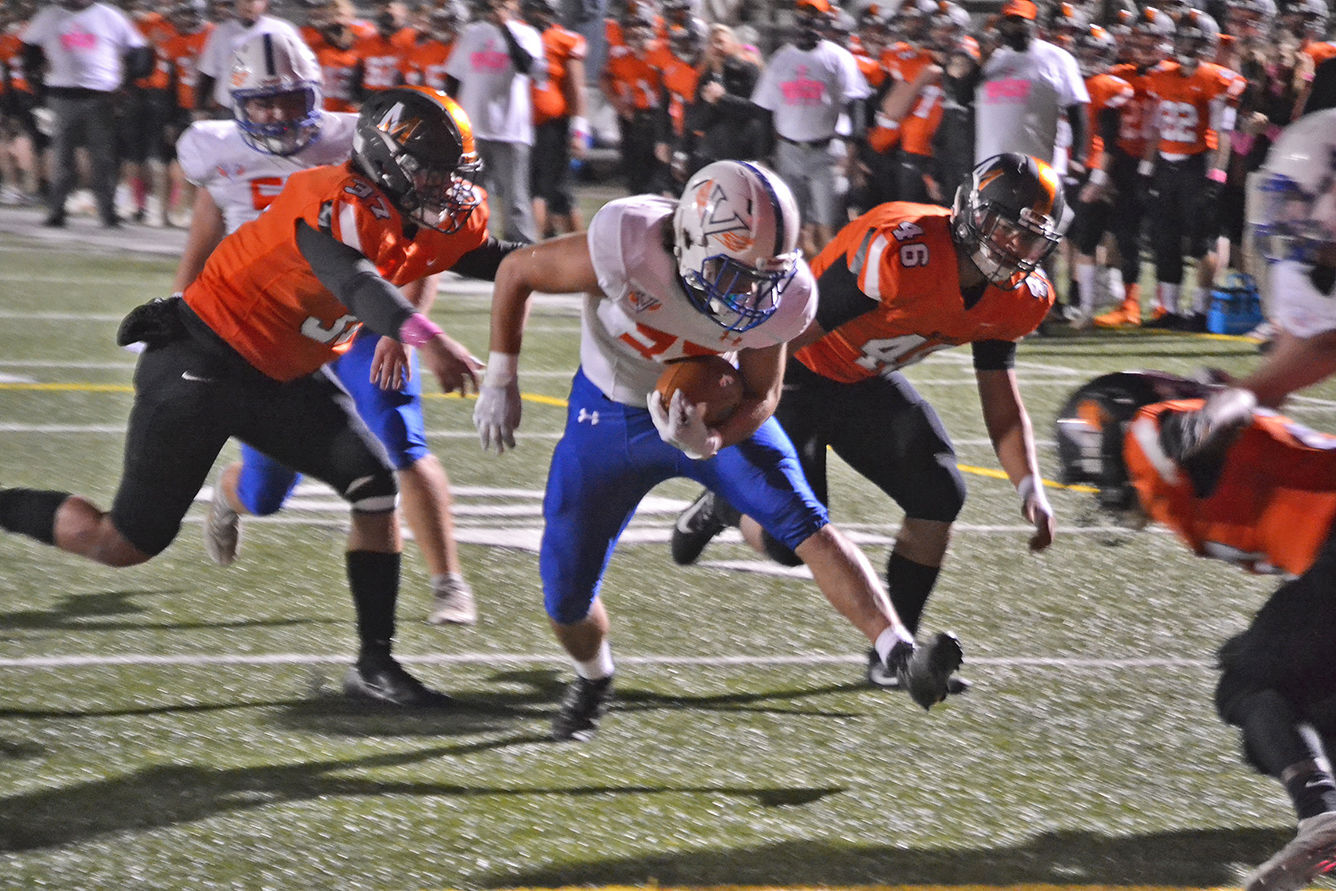 Cameron Johnson (32) runs for his fourth touchdown of the game in the Falcons’ wild 49-43 loss at Morristown East Oct. 16. Johnson rushed 31 times for 186 yards in the game. 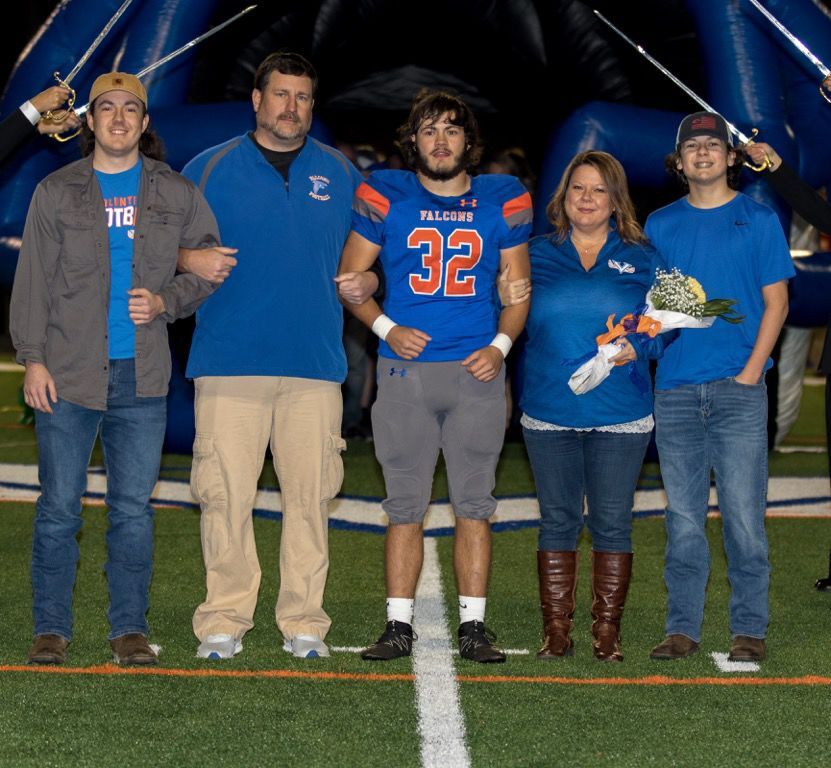 Cameron Johnson on Senior Night Oct. 30 at Volunteer with parents Stewart and Christy and brothers Chance (left) and Cole (right). 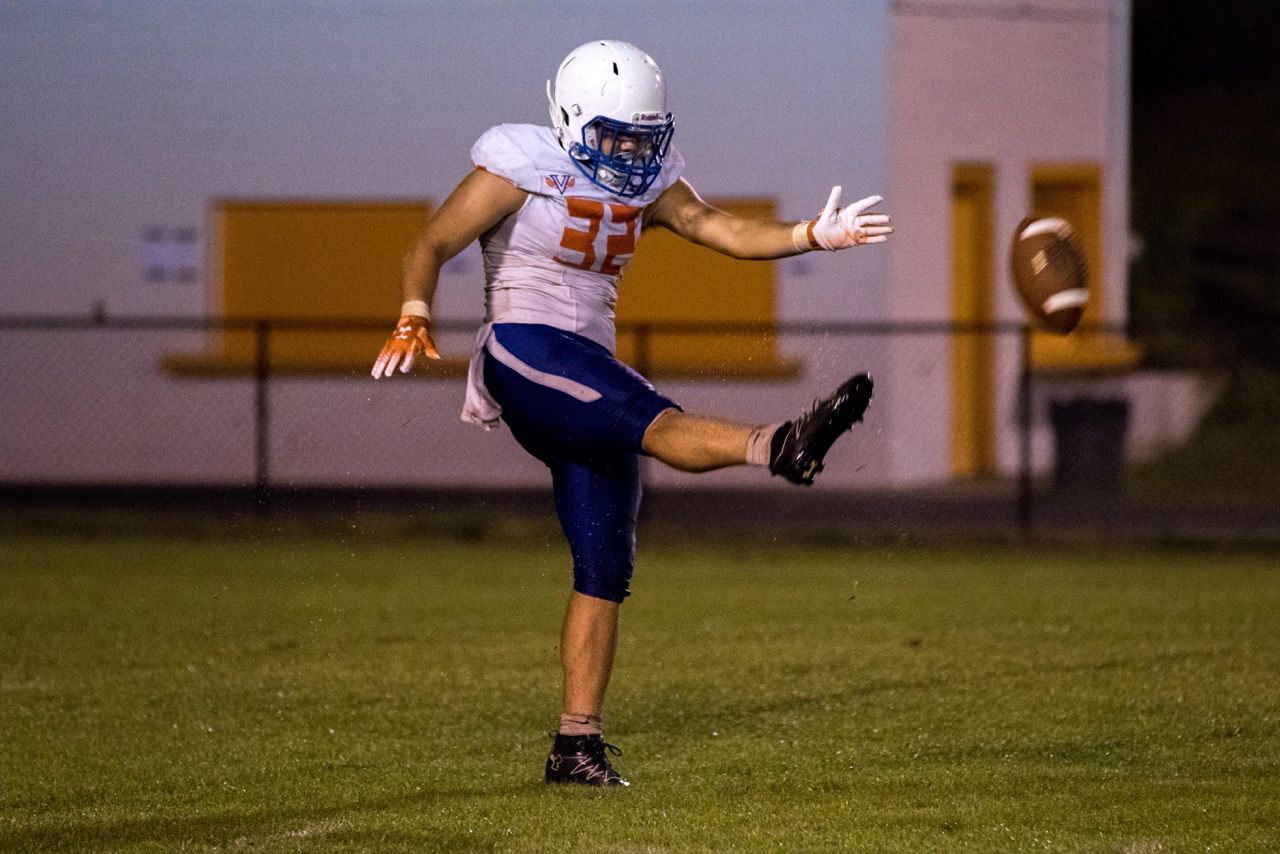 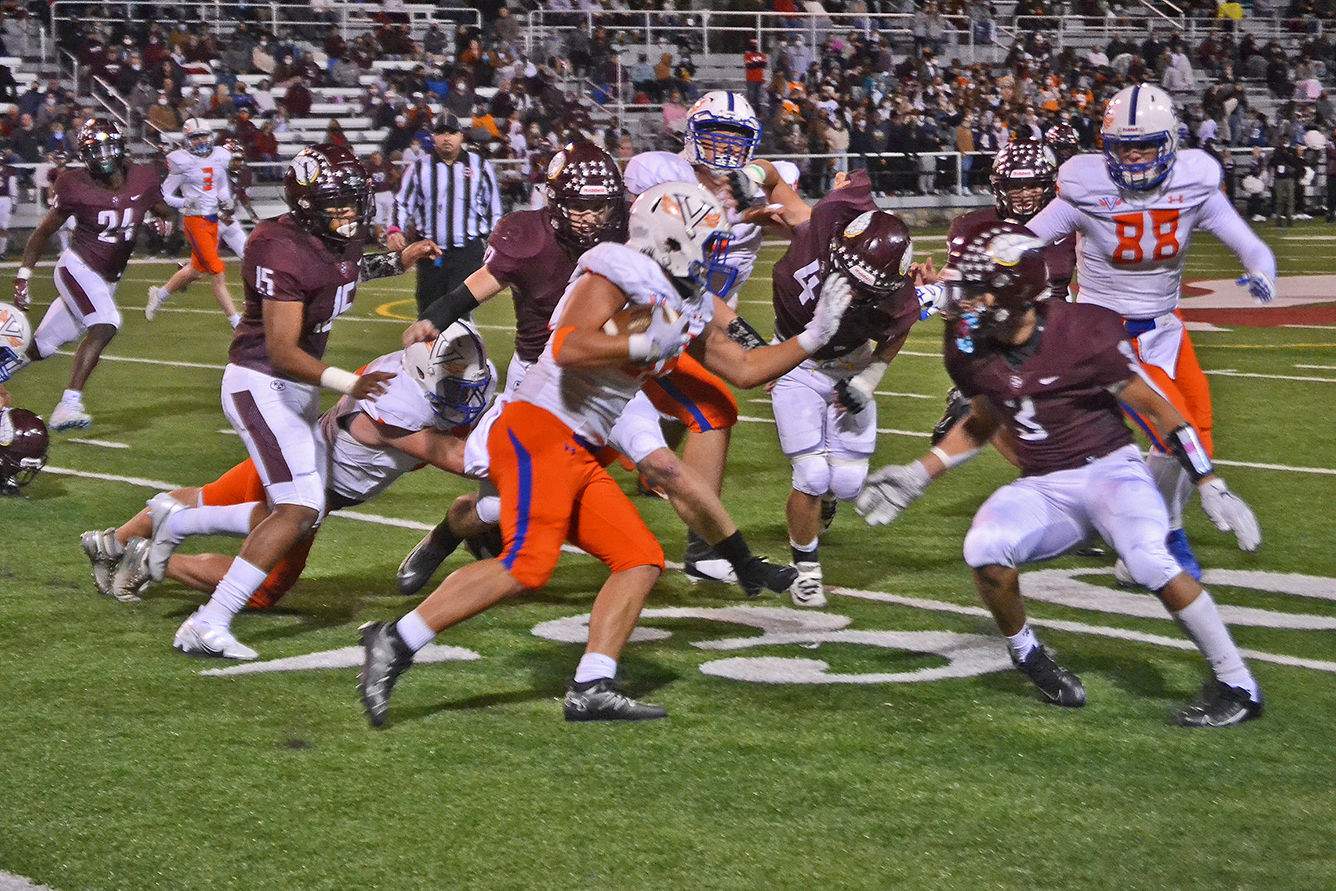 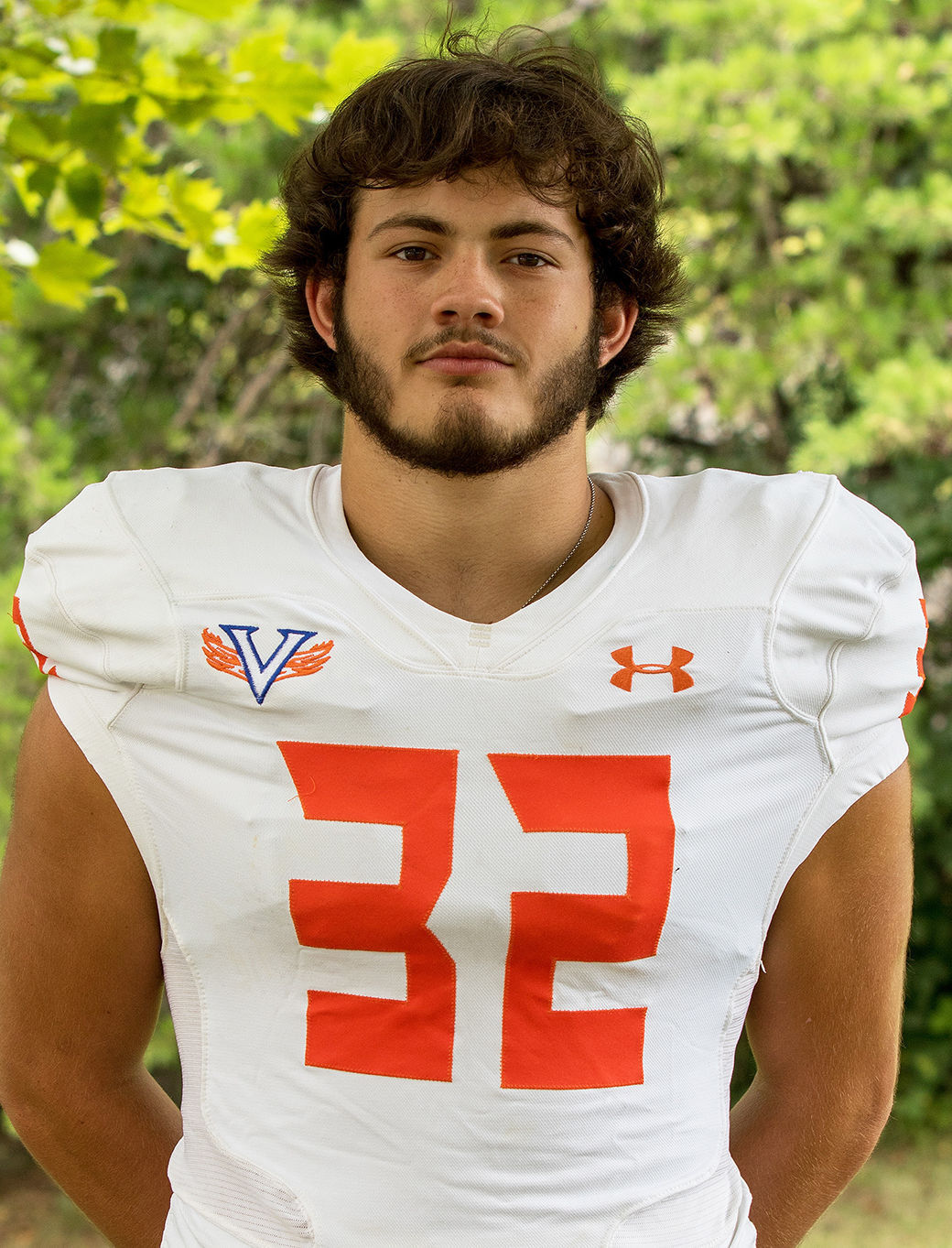 Cameron Johnson (32) runs for his fourth touchdown of the game in the Falcons’ wild 49-43 loss at Morristown East Oct. 16. Johnson rushed 31 times for 186 yards in the game.

Cameron Johnson on Senior Night Oct. 30 at Volunteer with parents Stewart and Christy and brothers Chance (left) and Cole (right).

CHURCH HILL – As the one-year anniversary of COVID-19 shutdowns arrives, its effects are still being felt even while schools are open.

“I was talking to a couple of coaches about this,” said Falcons football coach Jesse McMillan. “Our senior kids this year really got the short end of the stick. This is the time of the year when coaches are out recruiting.

“Smaller schools aren’t because they’re getting ready to play. And you’ve got the dead period that they put on Division 1 schools,” McMillan said.

One of those feeling the pinch is Falcons senior Cameron Johnson. The running back racked up 5,008 career all-purpose yards, including 2,697 rushing and 406 receiving, 1,905 kickoff return yards, and 30 career touchdowns.

“I got an offer from Ferrum College,” Johnson said. “It’s up in Virginia. As of right now, I’m still looking at different schools, just talking to different coaches and seeing what’s best for me before I make a big decision.”

“I’ve been trying to get some feelers out there,” said McMillan. “I think he’s a Double-A, D2 guy, easy. That’d be my guess. There are some good D1 and D3 schools out there, too, don’t get me wrong.

It’s believed that Johnson is just one of three Volunteer student-athletes to have made first team All Conference all four years, along with Will Cordell and Alyssa Hatley.

“Making all conference all four years, and making first team is definitely something special,” said Volunteer Athletic Director Jeremy Bailey. “It just shows the hard work ethic that he put into the time.

“I coached against Cam, so I saw it at the middle school level. I saw the determination and the fierceness that he had to work hard. As soon as he started from his freshman year, I was watching him play at that time, it was no different,” said Bailey, former Rogersville Middle School coach.

“He played at Church Hill and I coached there at RMS. Probably one of my most fond memories was a hit on our sidelines that he had against one of our players. He just got up, smiled and walked away. No arrogance about him, he just played with heart and intensity,” Bailey said.

Johnson hardly ever left the field.

He started as a freshman as a safety on defense, while performing on kickoffs and kickoff returns. The last three years, Johnson only came off the field during some punt returns. He handled kickoff returns since his freshman season.

As the team’s punter, he holds a 37.2 career average, his longest being 67 yards.

On defense, Johnson had 191 career solo tackles and 312 total tackles. He had eight career interceptions.

“He’s not going to be intimidated by anybody,” McMillan said. “I think you can look at how he played in some of those games when his offensive numbers weren’t what we were wanting, but how hard and well he played on defense.

“He ended up playing way more than we anticipated on defense. We were just so thin back in the back end and we had to play him a lot more. For the most part, he played really well back there. There were times he got lost in coverage here and there, but he played way better than the way he played when we had him back there previously. That’s just him working at it,” McMillan said.

“He was a certainly a guy that everyone that you played had to account for. He ran it really well, especially when we got it where he was getting downhill more. I had the same issue when I was in high school. I was a little fast, so you always wanted to bounce stuff when you didn’t need to,” McMillan said.

“As the year went along, especially starting in game three and four, he started getting more downhill and realizing that sometimes, you know, those three-yard runs are going to turn into 20-yard runs. You don’t always have to bounce it outside for it to be a big gain for you,” McMillan said.

“He certainly ran with an attitude. I think some of those games when we didn’t have as much success running the football as we wanted to, he still ran it hard. He punished people that tackled him a lot of times. It wasn’t fun for them,” McMillan said.

“My adrenaline starts going, then I get my team going,” Johnson said. “I just won’t stop until that fourth quarter is over with. I’m a little laid back the majority of the time. But in football, if somebody’s not doing their job, I’m going to step in and say, ‘You need to do this, you need to do that.’”

“He became a really, really good leader,” McMillan said. “That’s the thing I’m most proud of, the way he worked, how many kids looked up to him. He kind of set the tone for us with the way he went about things.

“I’ve never coached a kid, going on 14 years coaching, that I’ve seen grow up as much from when you first meet him to the last game you coach him. That was a testament to him. He always had talent. Just to see him mature and to get his emotions under control like he was able to do his junior and senior year was something I’m very proud to have watched,” McMillan said.

“He always had the talent. He just made the decision he was going to make himself a player. He worked really hard. You saw it really start to happen going from sophomore to junior year. And really, from junior to senior year what he did even with us not getting to work out, condition and run and stuff like that, you could tell he did a lot of stuff on his own,” McMillan said.

“When we got back in the summertime, he worked really hard. He’s a very competitive kid – highly competitive. I think that’s his greatest attribute. That doesn’t just mean he wants to win. He wanted to get better,” McMillan said.

Johnson grew up competing with his brothers.

“We competed all the time, especially my older brother, Chance,” Johnson said. “We always had the mindset to be number one, so it was always a dogfight between each other. We’d be playing cornhole or something and we’d be fighting about it. We’re just a competitive family.”

Johnson is ready to compete at the next level.

“I want to go to a college that’s best for me, that makes me feel like home,” Johnson said. “I don’t want to go to some college where I don’t feel comfortable. I’m going to be away from my family for the next four years, so it’s a very big decision. I’ll keep looking. I’ll keep talking to more coaches and go from there.”

“I think whoever gets him, whether he plays running back or whether he plays something on defense, they’re going to get a good player,” McMillan said. “Because he’s still growing and he’s just going to work hard at it. That’s a lot of it when you get to that next level: how much are you willing to work.”

Johnson plans to do just that.

“My primary position is running back, and my secondary position is safety,” Johnson said. “I’m a little shorter guy, so I probably wouldn’t play linebacker in college, so I could be a safety or cornerback. Obviously, I’d try to get out there and play special teams. Whatever the coaches put me at, I’ll do my best and work my heart off.”

Johnson, who plans to major in business, said in college his goals are to “academically, make good grades. I do my best. If I don’t know what to do, I go get help from the teacher.”

“Football, my goal is to get 1,000 yards every season. That’s been my goal since I was little,” Johnson said. “Every season I’m up there, just do my best.”