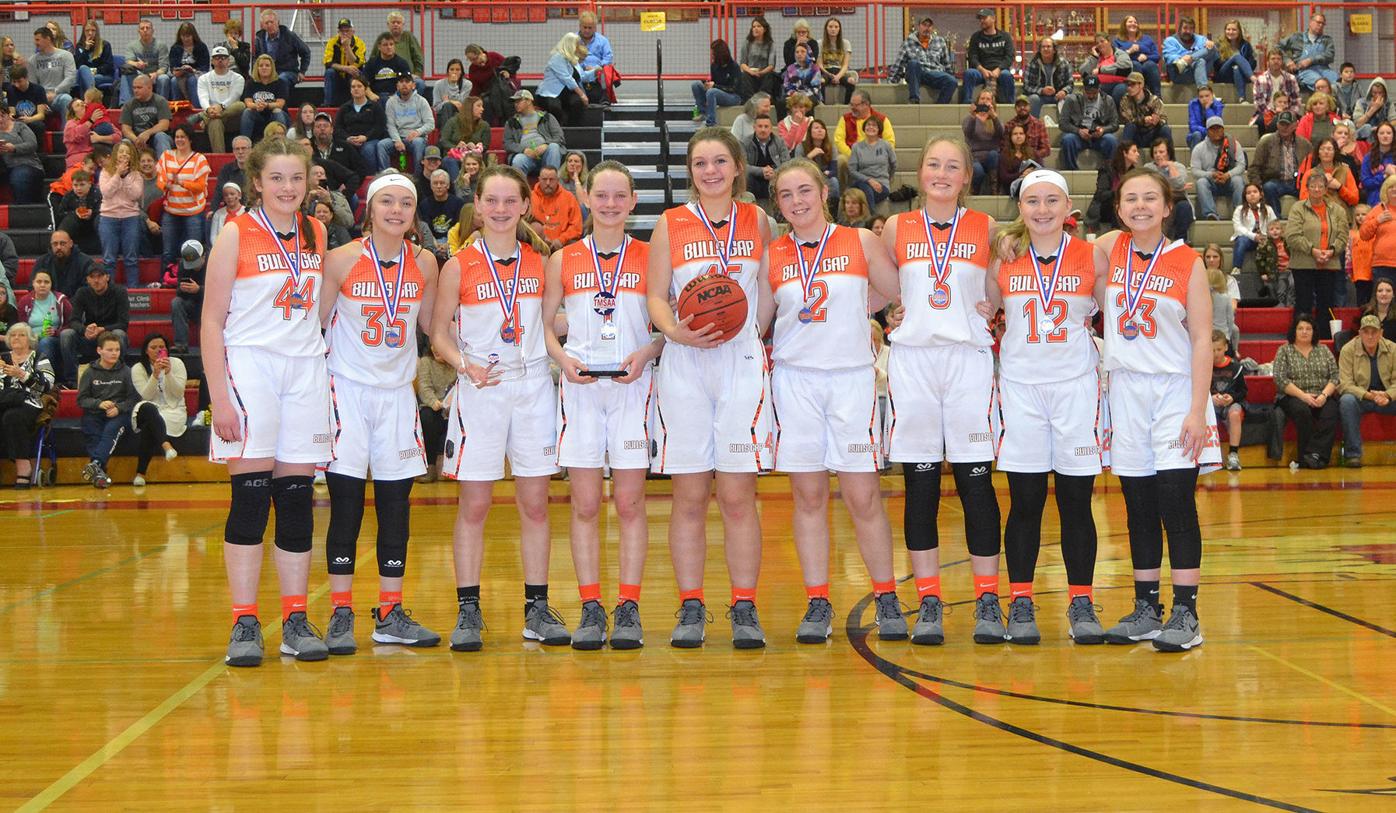 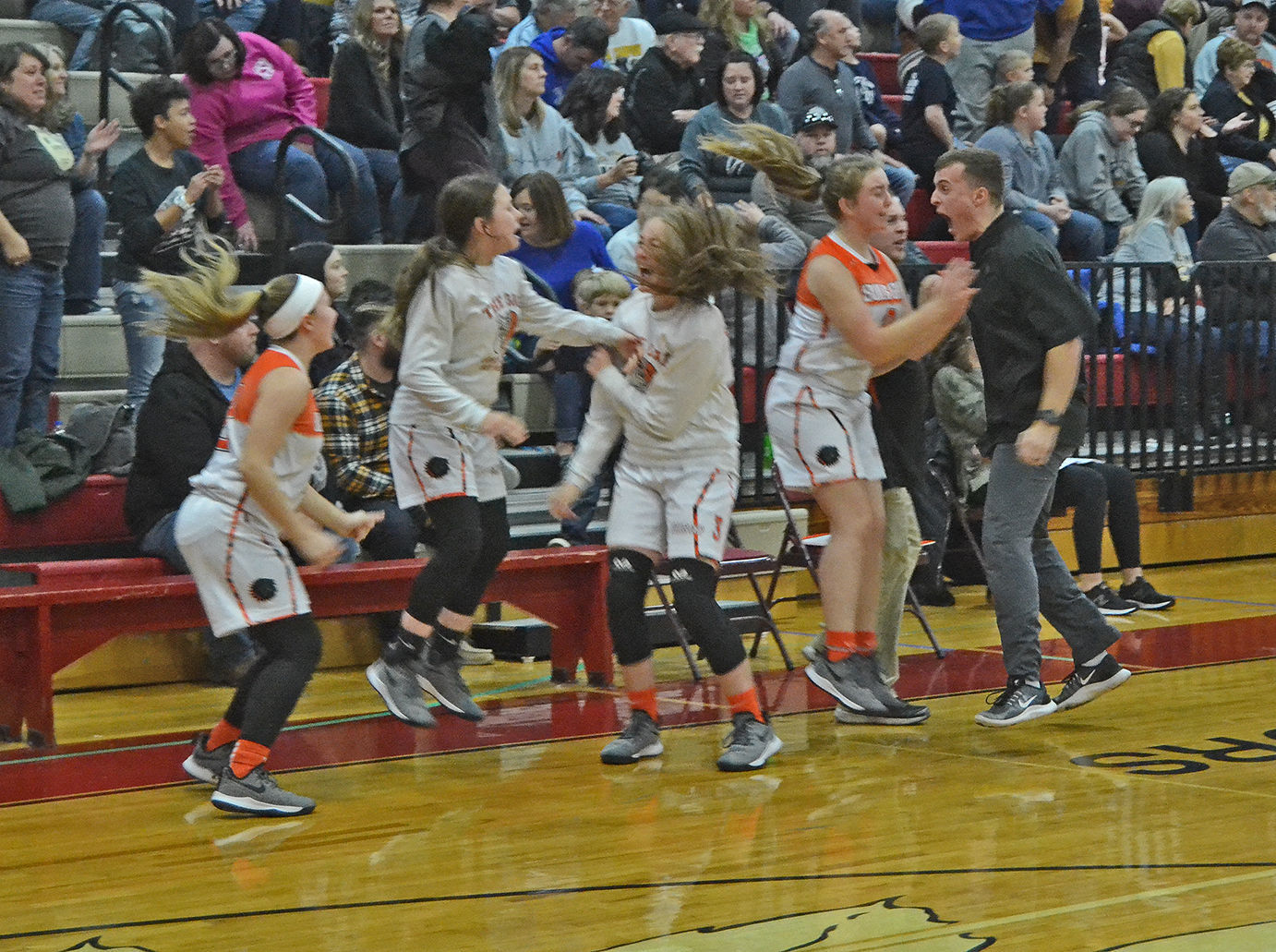 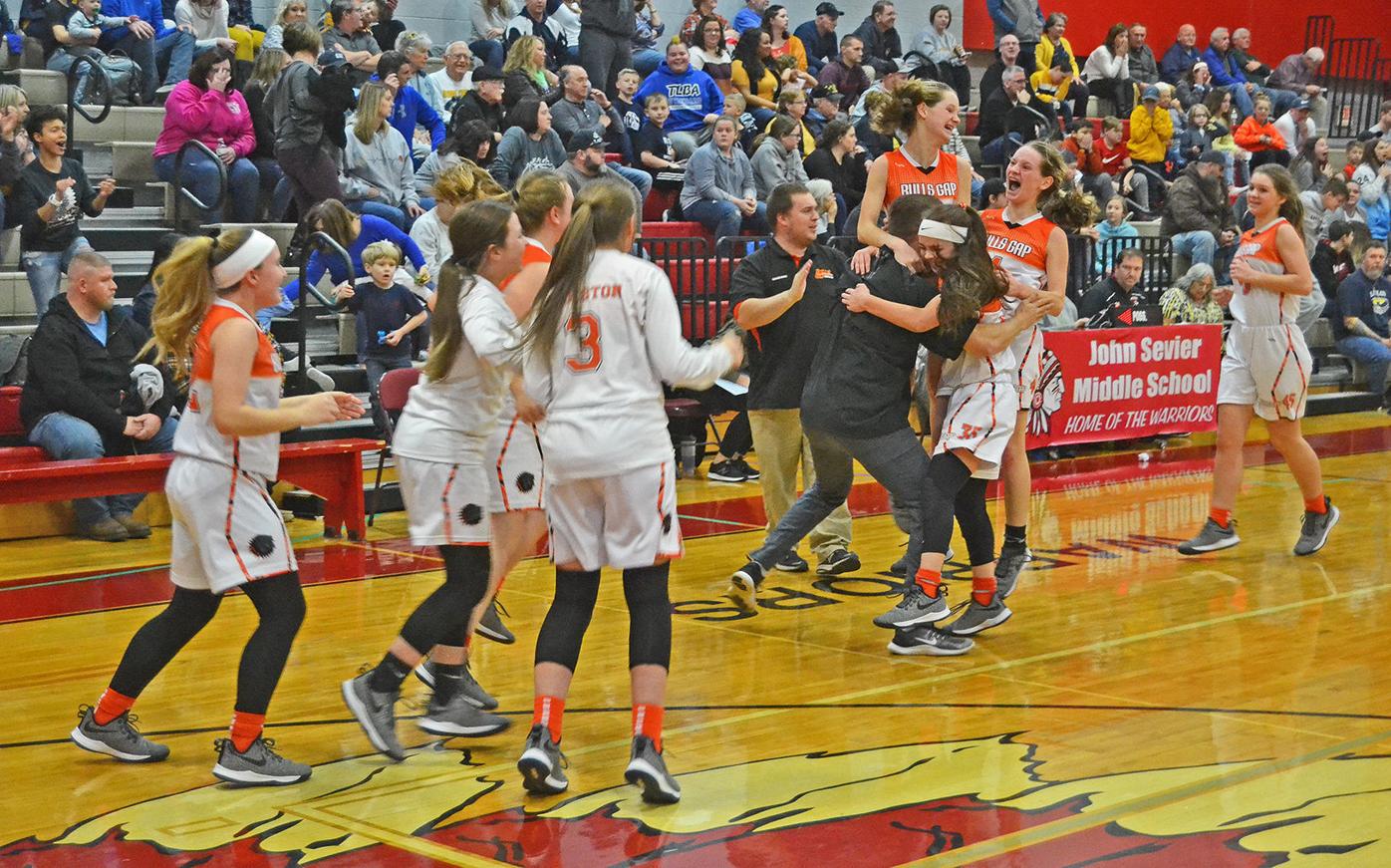 Bulls Gap coach Shawn Bond embraces his players as the race to the bench following Bulls Gap’s 43-42 victory Saturday over Cloudland in the Section 1 Class A Championship at John Sevier Middle School. 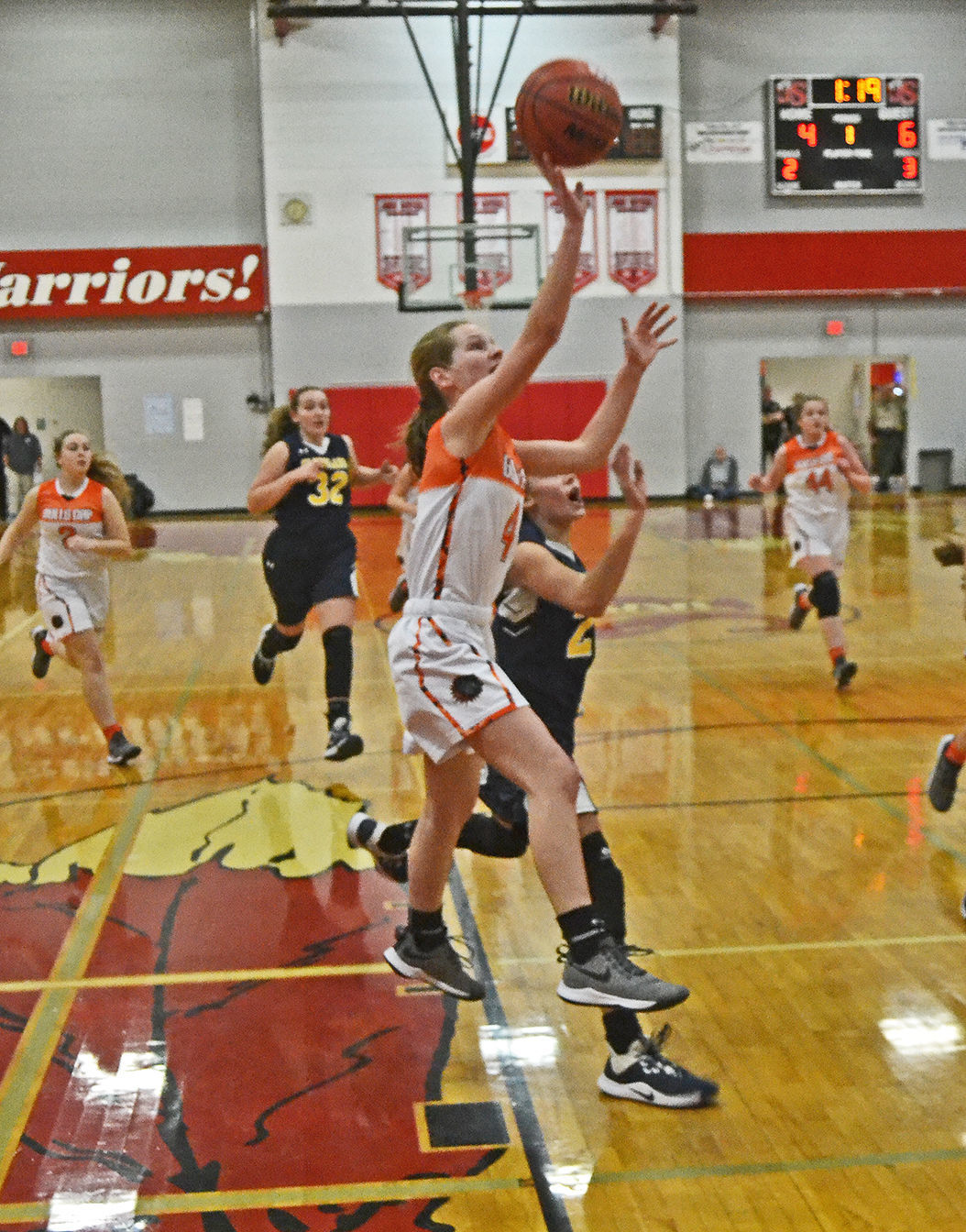 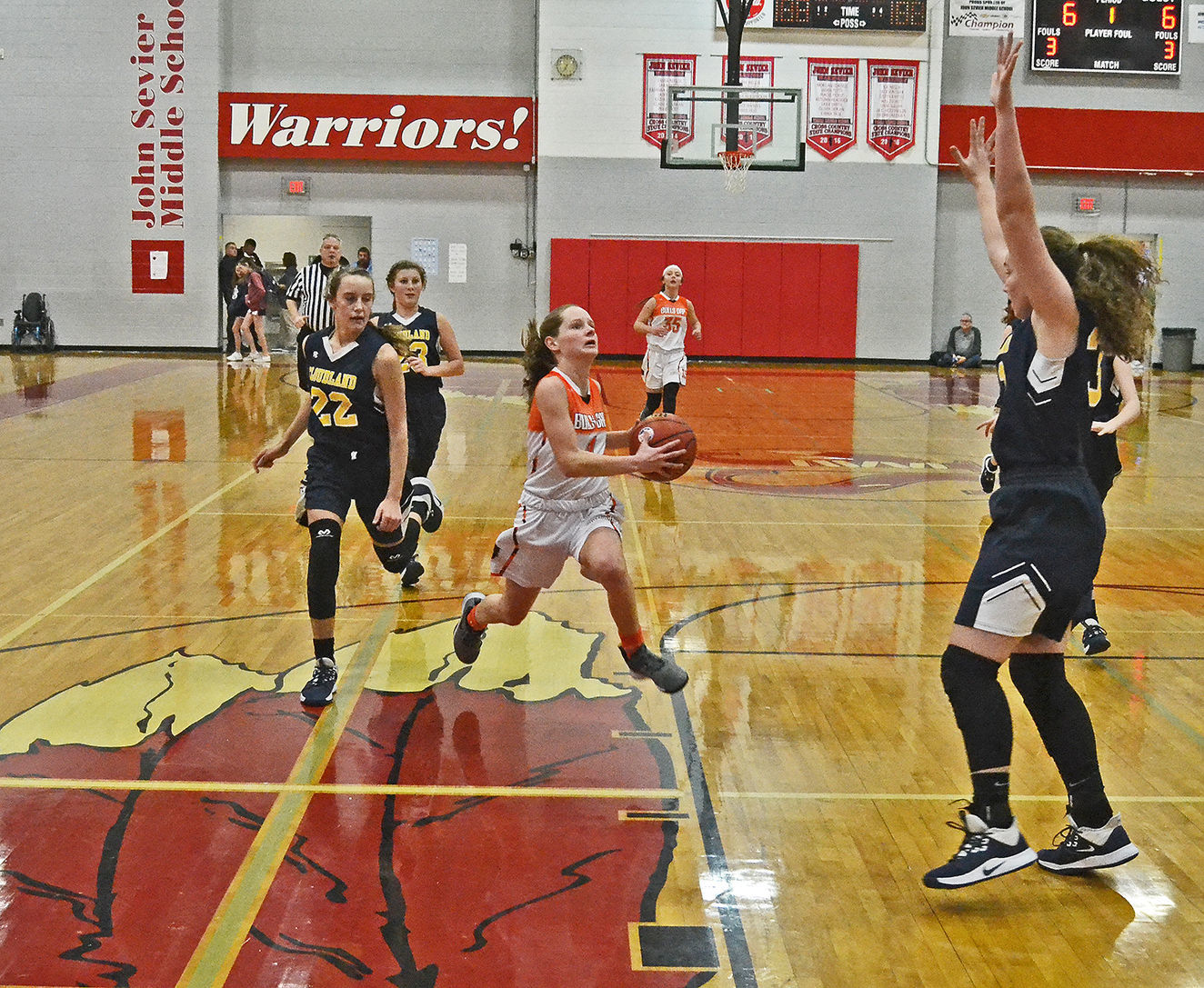 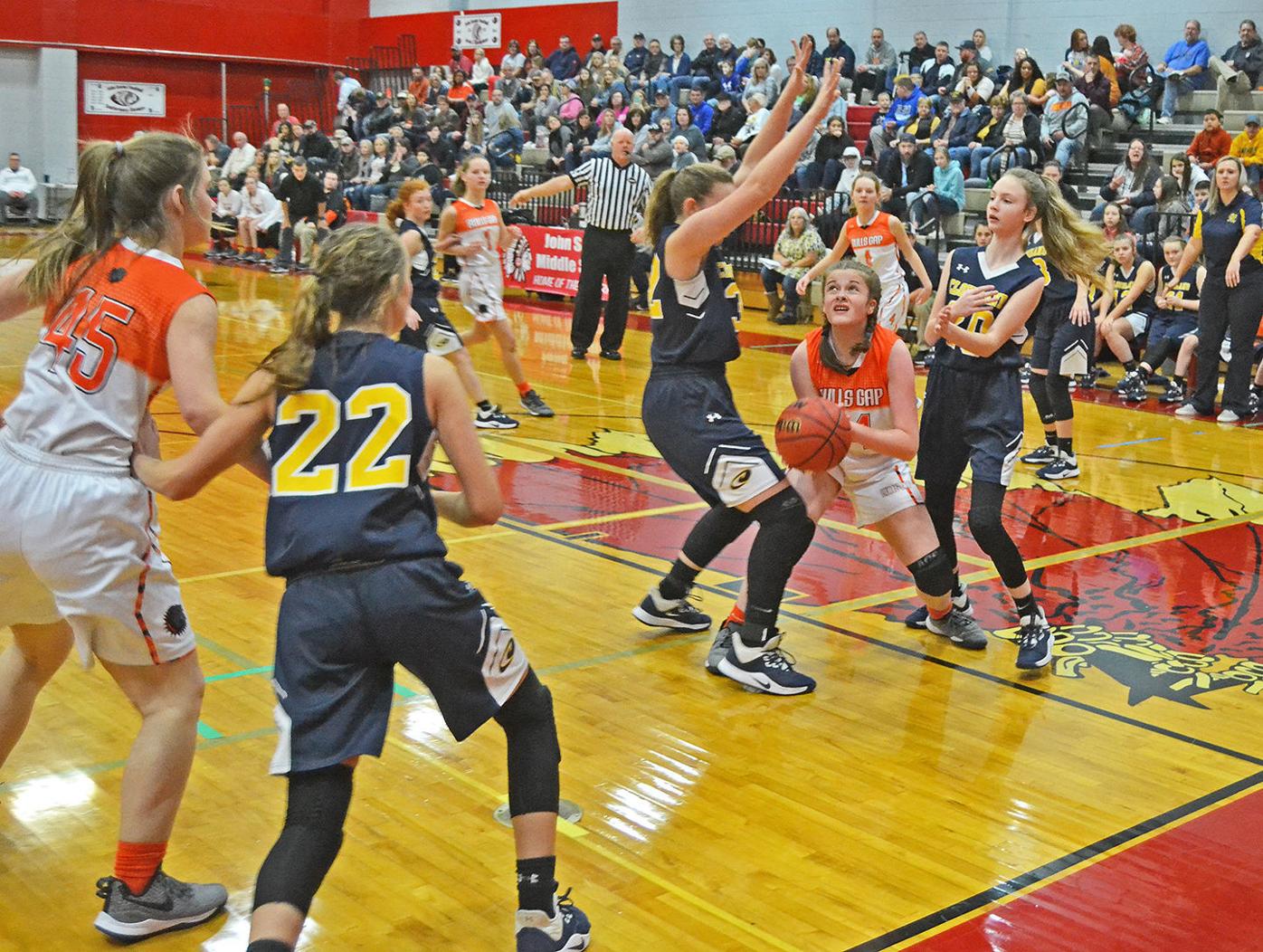 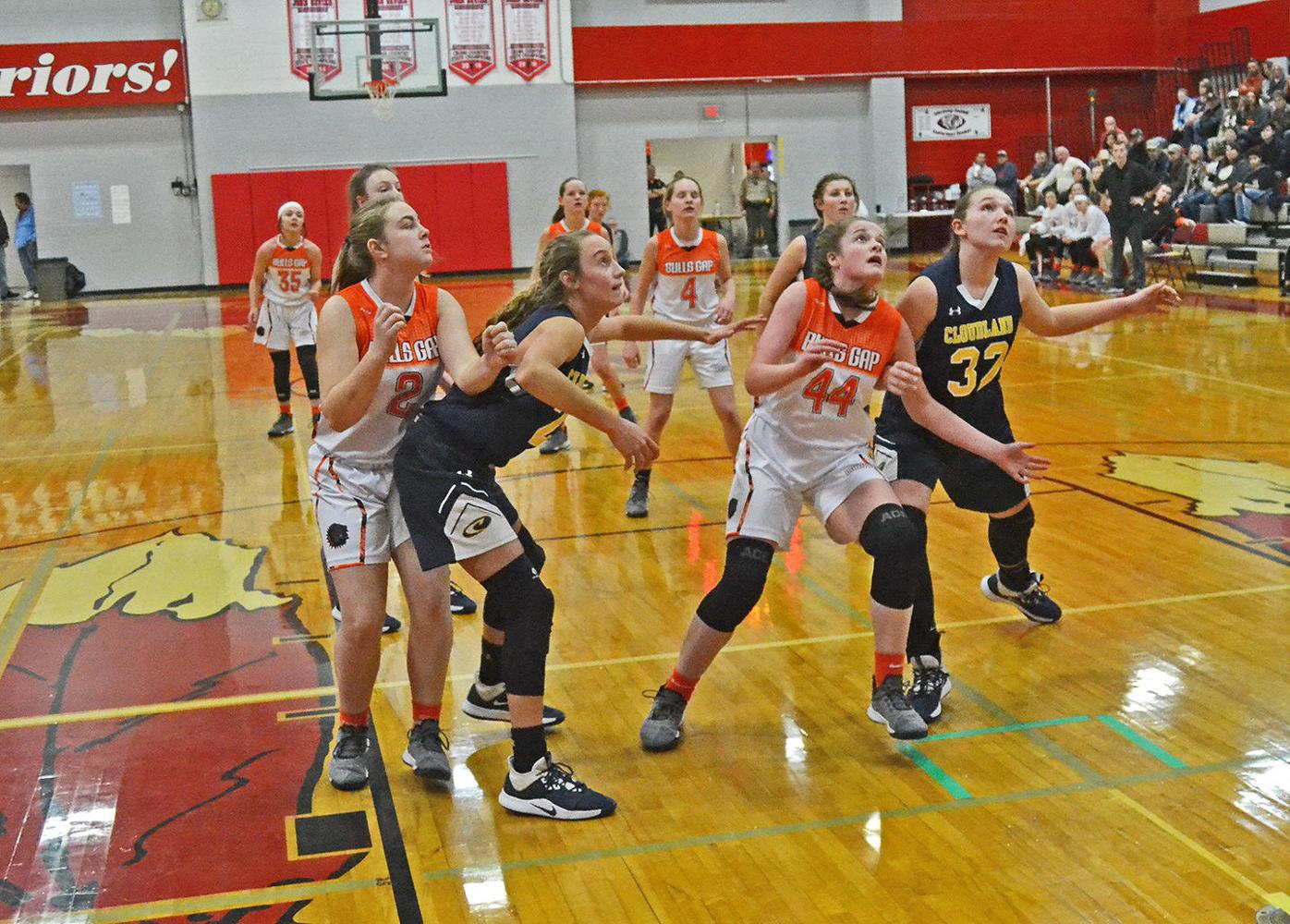 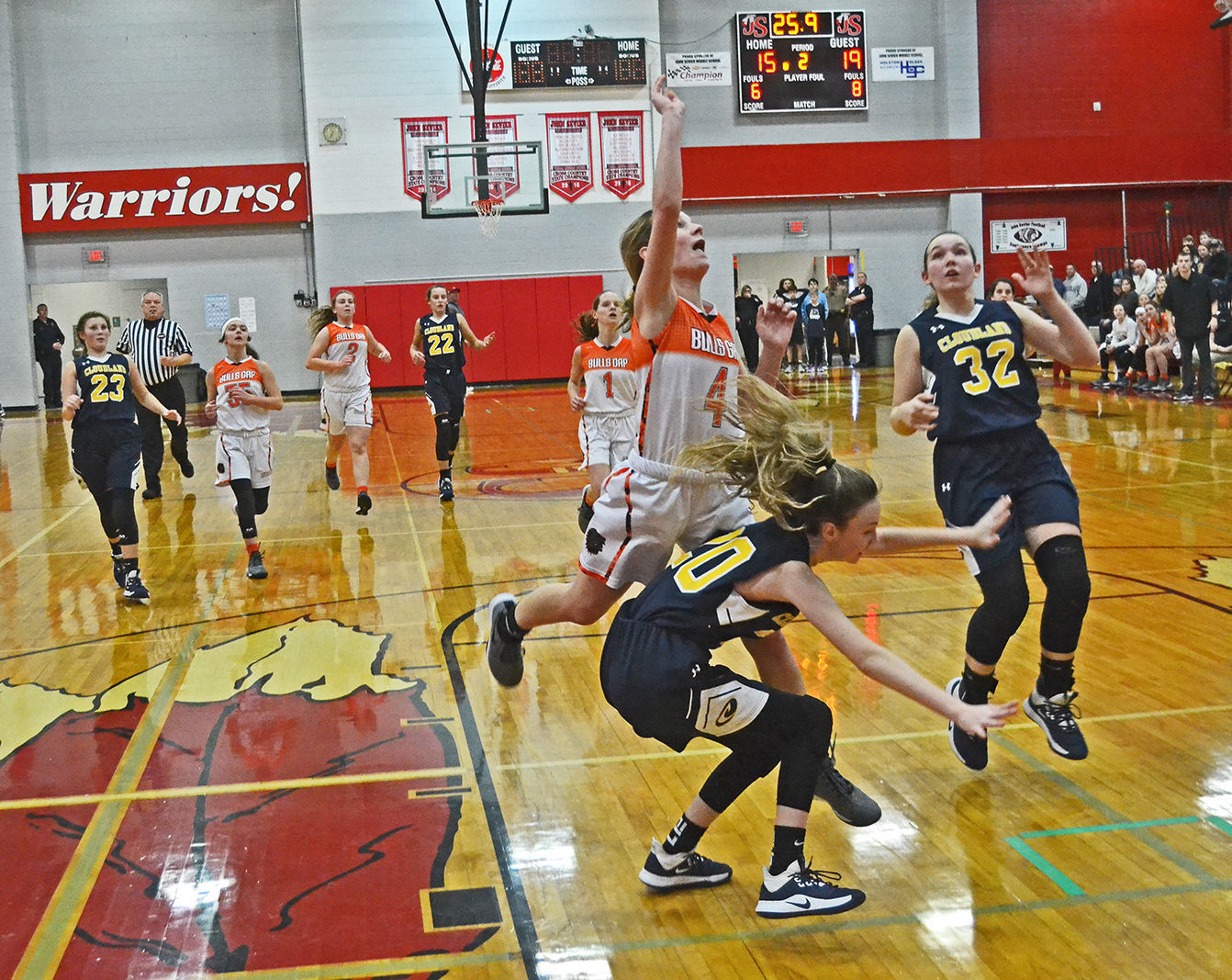 Anna Houck draws a foul on Cloudland’s Bella Clawson (20) late in the first half. 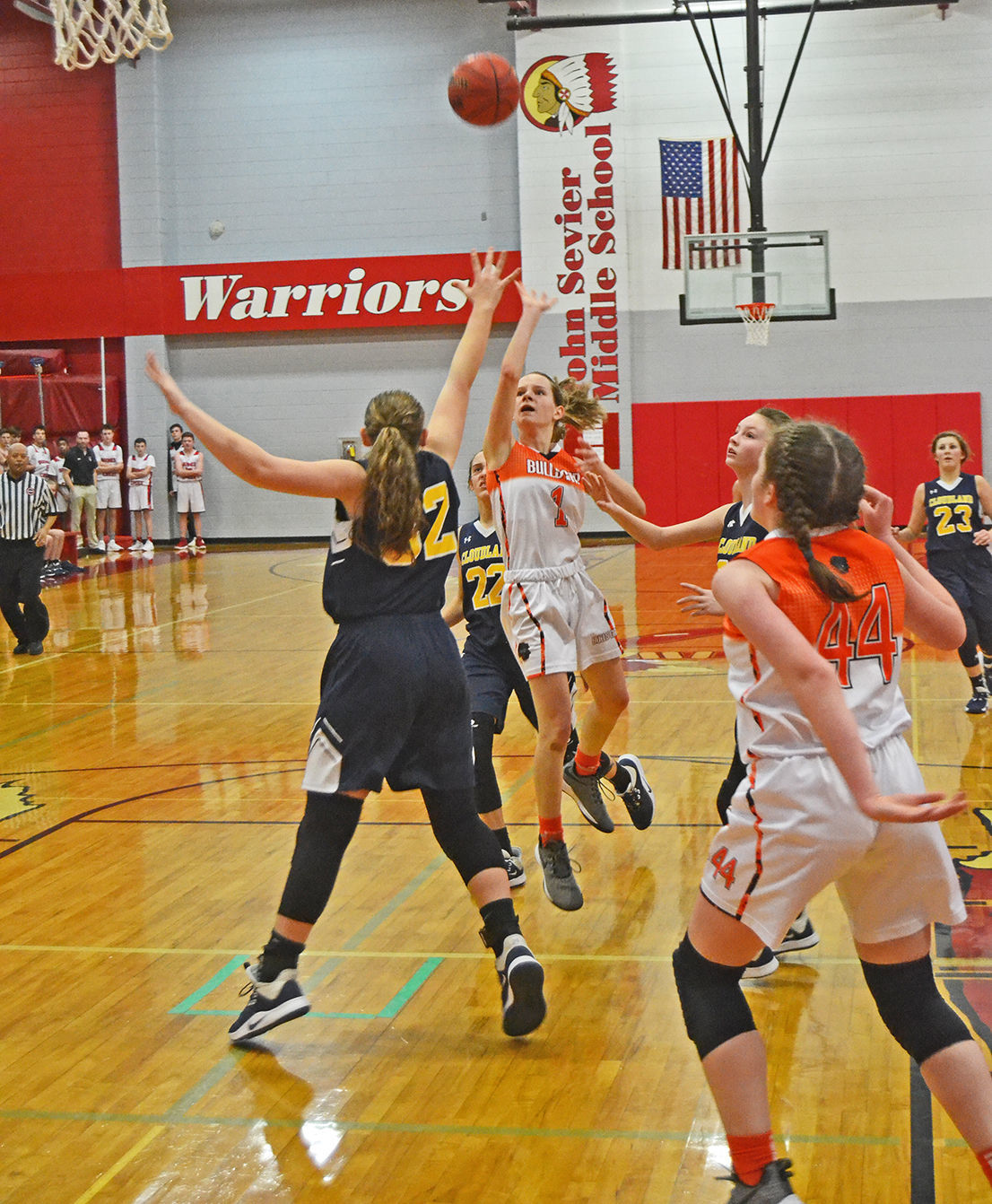 Emma Houck puts up a shot in the paint over Izabella Christian (32).

Bulls Gap coach Shawn Bond embraces his players as the race to the bench following Bulls Gap’s 43-42 victory Saturday over Cloudland in the Section 1 Class A Championship at John Sevier Middle School.

Anna Houck draws a foul on Cloudland’s Bella Clawson (20) late in the first half.

Emma Houck puts up a shot in the paint over Izabella Christian (32).

Bulls Gap (24-2) is scheduled to play in the Class A semifinals at 5:45 p.m. Friday at Stewarts Creek Middle School.

The Class A championship game is scheduled for 1 p.m. Saturday at Stewarts Creek High School.

“I can’t put it into words,” said Bulls Gap coach Shawn Bond. “I’m just so happy for the girls. We’ve talked about it for two years. I don’t think they really believed it could happen. We won seven games the year before I started and now we’ve won 24 and are going to Nashville.”

Bulls Gap, which trailed for most of regulation and overtime, held the lead only once in Saturday’s game: 43-42, for the final 30 seconds.

“We tied it a few times and our only lead was there at the end,” Bond said.

Cloudland ran out to a 6-2 lead in the first, but the Lady Bulldogs closed the gap in the final 90 seconds of the first period to tie it at 6-6 going into the second.

In the second quarter, Cloudland immediately jumped out to a 14-6 lead, prompting a Bulls gap timeout with 3:38 in the half.

Two free throws by Emma Houck and a three-point play by Anna Houck offset a drive by Cloudland’s Ryan Turbyfill, but a three-pointer by Saharra McKinney put Cloudland ahead, 19-11, with 1:12 left in the half and the Lady Highlanders threatening to grab all the momentum.

However, Anna Houck scored two layups and hit two free throws to pull Bulls Gap back to within 19-17 with :24 to play.

After a drive by Turbyfill extended Cloudland’s lead to 21-17 with :12 left in the half, on a feed from sister Emma, Anna Houck answered with a three-pointer as the halftime buzzer sounded, closing the gap to 21-20 at the break.

“I thought that one right at halftime was huge,” Bond said. “It gave us a big sigh of relief. It almost got out of hand and it got to about eight and you could feel it. Then we hit a couple of big buckets there at the end.”

Cloudland opened the scoring in the second half with a three by Bella Clawson – her only basket of the game – at the 4:40 mark in the third.

“I thought defensively, we made it hard for them,” Bond said. “We rotated pretty well. We knew they liked to shoot the three and they didn’t really shoot it that well. We talked about which ones we were okay with shooting it and which ones we weren’t. We tried not to let (McKinney) be the one to beat us. We were going to let (Clawson) be the one to beat us and fortunately, she didn’t hit enough tonight.”

Turbyfill followed with a layup off a Bulls Gap turnover and Cloudland suddenly was up six, 26-20.

But Bulls Gap worked their way back, finding holes in Cloudland’s overextending defense just enough to hang close. Emma’s three with 4:09 in the third cut it to 26-23. Anna’s drive with 2:35 in the quarter made it 26-25.

“I thought they cheated a lot on their zone,” Bond said. “They over-extended towards Emma and Anna and they did a good job of swinging the ball as a team, and them attacking lanes. I thought that when we could get in transition, we did pretty well.

Anna’s second three-pointer of the game with 41 seconds left in the third ended the period’s scoring and pulled Bulls Gap to within 30-29. The twins combined for five three-pointers in the game. Emma hit three treys.

As in the close of each of the other quarters, Bulls Gap got close only to see Cloudland open up another lead. A put-back and drive by McKinney around an Emma drive put the Lady Highlanders ahead, 34-31. After a three-seconds call against Bulls Gap, Bella Christian scored on a put-back to increase the lead to 36-31 with 3:15 to go in the fourth.

Despite giving the ball back twice to the Lady Highlanders on a turnover and jump ball, the Lady Bulldogs defense stopped Cloudland on a possession and Anna Houck hit two free throws to cut the lead to 36-33.

Christian answered with two foul shots to increase Cloudland’s lead to 38-33 with 2:31 left. The Lady Highlanders then forced another Bulls Gap turnover, giving them another chance to pad their lead further.

However, Emma Houck stole the ball and scored on a fast-break, trimming the lead to 38-35 with 1:45 to play.

After an exchange of turnovers, Cloudland’s McKinney went to the line for a one-and-one with :41 left in the fourth. She missed the front end and Bulls Gap rebounded the ball and pushed the ball up court. With :33 to go, Emma Houck nailed a three-pointer to tie the game at 38-38.

Cloudland tried to run down the clock and take a final shot, but McKinney was whistled for five seconds for not advancing the ball against the Bulls Gap defense, and the game went into overtime.

McKinney scored on a free throw 19 seconds into overtime, followed 10 seconds later by a Christian put-back to give Cloudland a 41-38 lead.

Two more turnovers by Bulls Gap gave Cloudland another two offensive possessions. The first resulted in a missed one-and-one. On the second, Kaylee Cinnamon drew a charge near the baseline, giving the ball back to Bulls Gap.

The Bulldogs capitalized, as Emma Houck nailed a three-pointer to tie the game at 41-41 with 1:18 in overtime.

The Lady Highlanders got the ball back after the missed free throw, but the Bulls Gap defense came up big again when Madi Jones stole a pass on the baseline to give possession back to Bulls Gap.

“I thought we did a good job of mixing it up on defense,” Bond said. “We gave them different looks and kind of made it hard for them. They’re a tough team.”

Emma Houck was fouled on a drive and she calmly sank both free throws with 30 seconds remaining to give Bulls Gap its first lead of the game, 43-42.

After Bulls Gap forced a jump ball on the ensuing inbound pass and got possession, the Lady Bulldogs turned it over on their inbound play. Cloudland recovered the ball, called timeout and made a final attempt for a basket.

McKinney tried driving the ball then put up a shot. It missed, Bulls Gap’s Ariel Ferrell rebounded and time ran out, setting off a wild celebration on the Bulls Gap sidelines and among its many fans in the stands.

“Ariel has been huge,” Bond said. “She may not score a single point, but she has as big an impact as anybody. She’s probably the hardest working player on the team. To see her face right now is awesome. It was a big win for us.”

Anna Houck led all scorers with 22. Emma Houck added 19, including all five of Bulls Gap’s points in overtime. McKinney and Turbyfill led Cloudland with 14 each while Christian added 10.

“It’s just surreal, especially to win a game like that against a team like that. It took everybody and I’m just so happy for them,” Bond said.