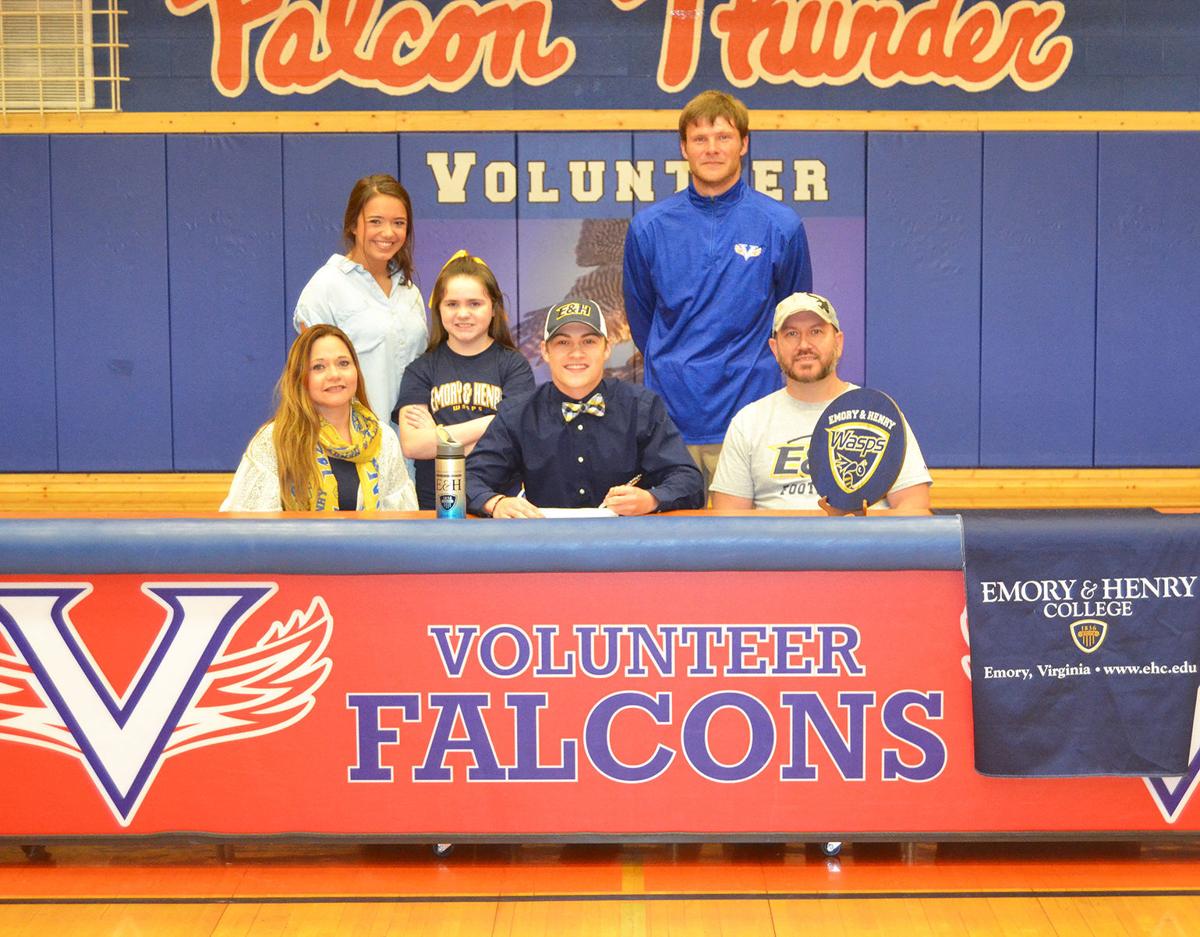 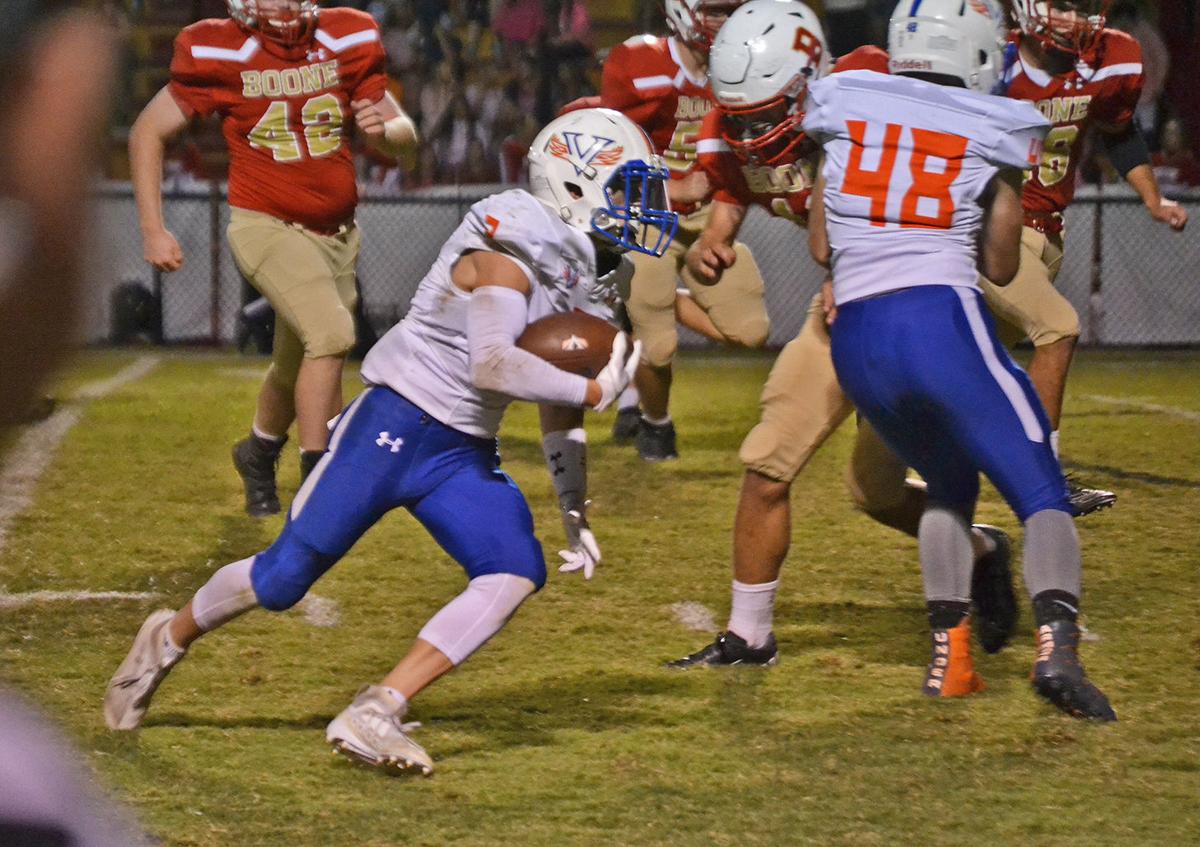 The speedy Falcon receiver/running back/kick and punt returner signed a letter of intent at a small ceremony among family, friends and Falcon officials Wednesday at Volunteer High School’s gym.

“I feel good,” Derrick said. “It’s a step forward getting to go play college football. I’m really excited. I thank Emory & Henry for the coaches that saw something in me. I’m thankful for that.”

“He made a sound decision,” said Volunteer Athletic Director Jim Whalen. “He was going back and forth. I talked to Peyton while we were in school before any of this ever started. He didn’t make one of those quick decisions that sometimes kids do. That’s really good on Peyton’s part.

“They’re getting a great kid up there. He is going to a great school. He’s going to get a good education. He’s going to come back and give a lot of money to Volunteer,” Whalen joked.

“And I get to continue my football career. It’s awesome. I’m going for pretty much nothing. It’s crazy. It showed that they really wanted me, that there is interest. I’m excited to continue to be able to play,” Derrick said.

Emory & Henry is frequently a destination for area football players.

Jesse McMillan, who was Derrick’s defensive backs coach and is now Falcons head coach, thinks Derrick will do well.

“He’s a fun kid to coach,” McMillan said. “He’s a really good kid. He’s a hard worker. He did a lot of things for us, whether it was returning kicks, running the ball, catching the ball. He didn’t play a whole lot of defense for us, but when we needed him to play, he played and did a good job for us.”

Derrick was known throughout East Tennessee for his speed.

“He has a very quick burst,” McMillan said. “We’re certainly going to miss that. It’s hard to replace a kid with a quick burst like that.

“He’s definitely one of those kids that can surprise you,” added Volunteer assistant football and baseball coach Josh Peterson, who coached Derrick in both sports. “Most people write little kids off, but he’s got some break-away speed and he’s a little bit powerful.

“He’s a very excited kid, always energetic and the life on the field,” Peterson added. “He always comes ready to work. It’s nice to see him sign. We got to watch him develop over the last couple of years in baseball, as well as football. He’s one of those guys that comes in every day ready to go to work.”

Both coaches rank Derrick high in the “coachability” category.

“He’s easy to coach,” McMillan said. “If you had a bunch of Peyton Derricks, it’d make life easy as a coach. He’s like a lot of our kids. We’ve got good kids here who want to work and they’re trying to work and get better. He was a good example-setter for us the last couple of years. He’s smart off the field, good in the classroom, so I think he’ll do well at Emory.”

“Like Coach McMillan said, if we had nine guys on the baseball field that were Peyton Derricks, we’d be pretty well off,” Peterson added. “He’s one of those kids that’s really tough and really hard-working. You know what you’re going to get out of him every day.

“I think his future is very bright. A lot of us, Coach McMillan and myself, played college ball. To play college ball, you’ve got to work at it every single day. That’s what he does. If he continues to do what he’s done here and establishes himself, I think he’s going to be very successful,” Peterson said.

Derrick plans to do just that.

The Wasps are going to send Derrick a workout regimen.

“They’re going to send me a list to get in the weight room over the summer,” Derrick said. “It’s going to be important. I’ll just put on weight.”

Derrick appreciates the opportunity to continue to play.

“I’ve played ever since I was five,” he said. “People have always been bigger than me. It shows how hard I’ve continued to play. A lot of people from here don’t get to go continue to play sports. It’s an honor to be able to go play. I’m excited.

“I actually asked them what was my future up there because I want to play, that’s why I’m coming up there. They said my first year, I’ll get the opportunity to get back there on kickoff returns and punt returns. There’s a senior at slot receiver. That’s where I’m going to play receiver. Hopefully, after he leaves, I’ll be able to get a spot there. I’m excited for that. Everything has worked out. I get to go to school, I get to continue to play football,” Derrick said.

“I’ve been up there about four or five times,” he said. “The campus is great. You can walk from one side to the other in eight to 10 minutes. It’s awesome. I’ve been up there on game day. It’s really vibrant. I got there at 9 o’clock on game day. The game starts at around 12 or 1 and there were already people there at 7 or 8 o’clock. It’s a big football atmosphere and I like it.”

“It’s not too far from home. It’s about an hour and a half from where I live. I can come back home,” said Derrick, who has an idea of a major.

“I think I’m going to go into education. I’d like to be a teacher and come back around here or go somewhere and be able to coach,” he said.

Derrick said he wants to be an example for others, to encourage them to be able to go play college football as he did.

“I want to be a part of something greater than myself,” he said, then cited others who helped him get to where he is now.

“My parents have encouraged me throughout the years,” Derrick said. “I’ve had coaches in the past who encouraged me and believed in me. I’m not a big kid, but they put me in there because they knew I could do something with the football. I appreciate all the people – friends and family – who have encouraged me along the way. I’m excited to continue.”

If given the opportunity to continue baseball, he would do that, too.

While Derrick is excited for the next stage in life, he said he will miss one aspect of what he’s leaving behind.

“There’s nothing better than playing at home on a Friday night,” Derrick said. “It’s awesome. The student section is packed and loud. They’re ready to rock every night. It doesn’t matter who you’re playing. It’s always fun.

“Right before you leave the locker room, you can hear them all the way up top as you’re walking down. You can hear them beating and banging. That’s what I’m going to miss, the Friday nights. It’s awesome,” he said.

Derrick acknowledged the fan support even when the team didn’t always fare well.

“The students come and they’re always having a blast,” he said. “They’re rocking all the way to the end of the fourth quarter. I appreciated my time here. It was awesome. I’m glad I get to continue to play and be a part of something different, but I’m going to miss it here. I really am.”