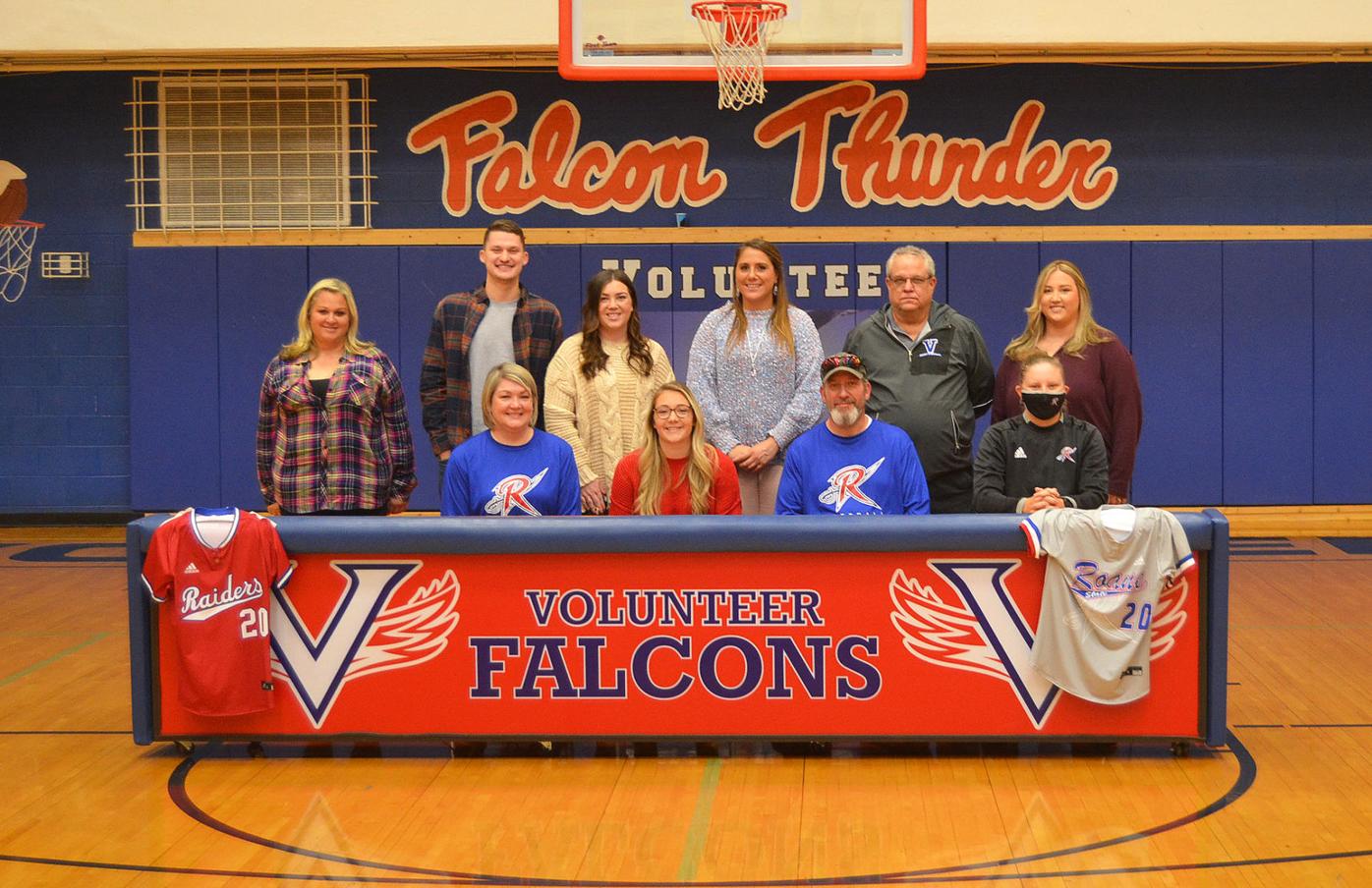 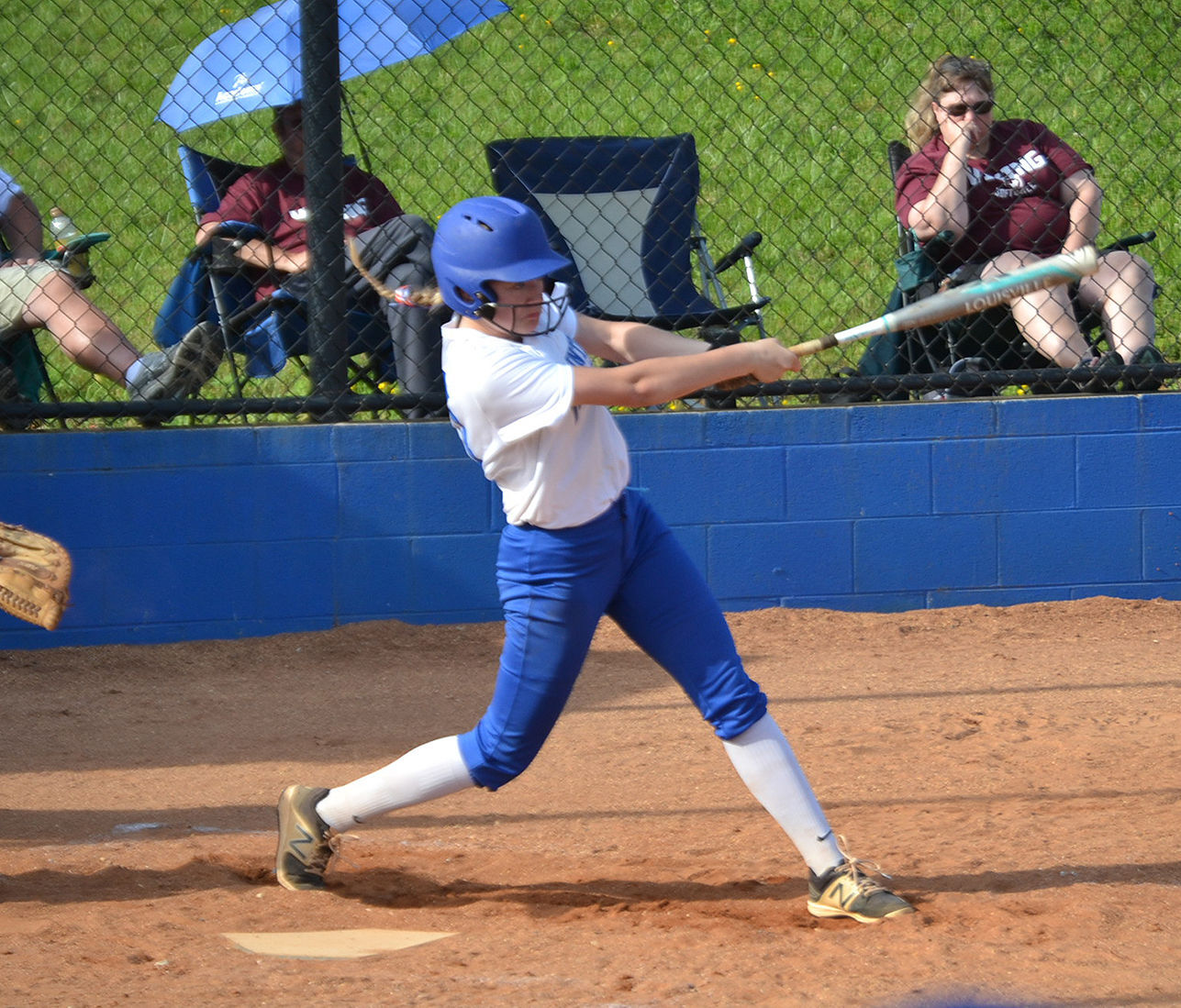 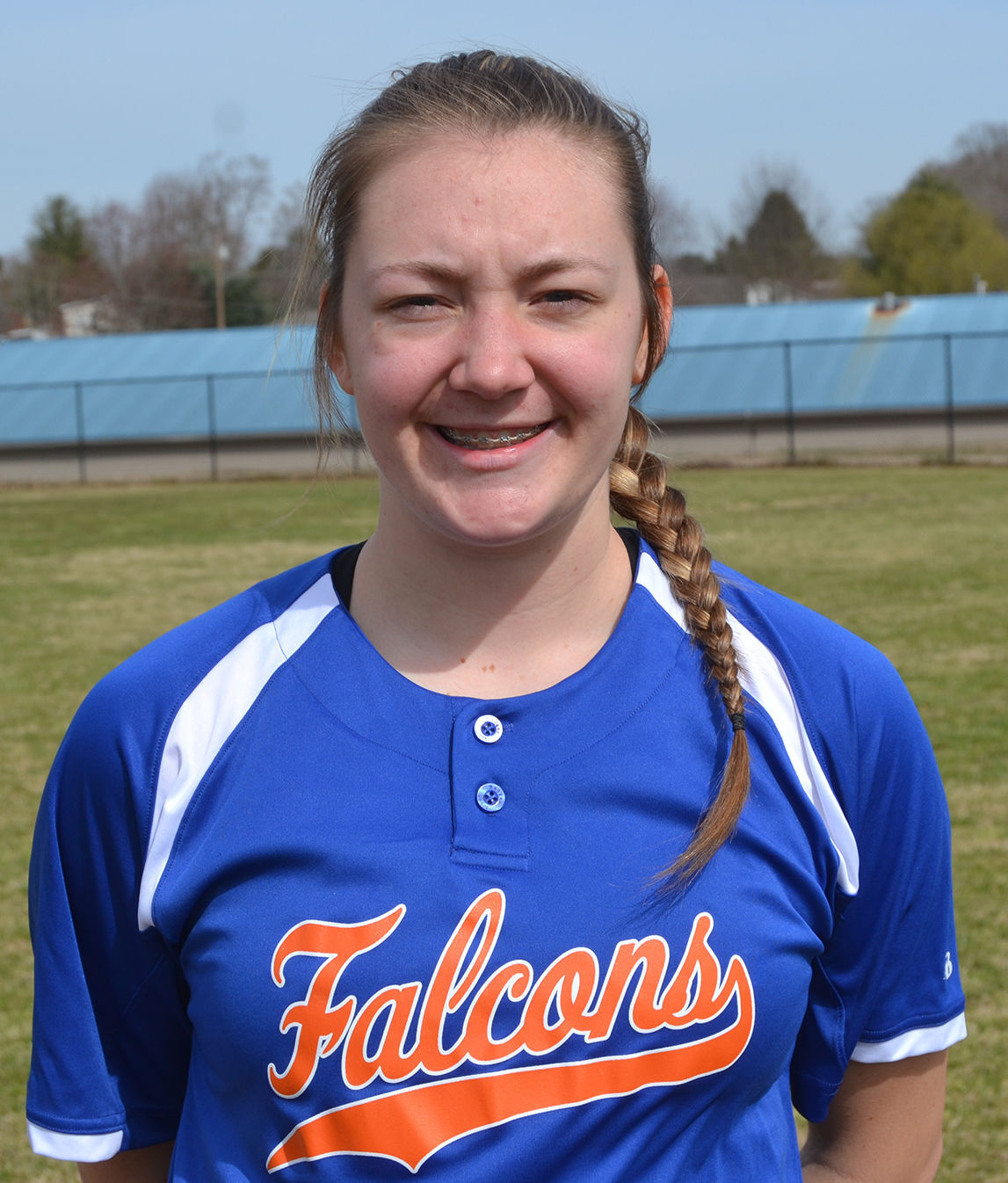 CHURCH HILL – Winner, competitor, warrior are words that come to the minds of those who have coached Aliyah Crawley, the Volunteer senior who signed a letter of intent at the school Tuesday to continue her softball career at Roane State.

“She’s been one of the most big-hearted kids I’ve ever coached,” said longtime Volunteer softball coach Jackie Strickler. “She wants to win so bad. She takes everything personally – it’s her fault if she doesn’t win, if she’s not successful. But she’s a winner. She plays hard. She’s going to give you 110 percent.”

“She’s a warrior,” Volunteer girls basketball coach Tyrone Smith added. “She’s always got your back. She puts her body on the line for you. She gets the team together as a group.”

“She’s probably one of the best athletes we’ve had come through here,” said Volunteer golf and swim coach Jim Whalen, who emceed Tuesday’s signing. “She is a competitor.

“When you’re a coach, you can coach how to hit, how to throw, and things of that nature. Something that you can’t coach is how to be a competitor. She is. She just wants to win. I don’t care what she’s playing. She wants to win,” Whalen said.

“Aliyah is a competitor,” Hackworth said. “You can tell with just her actions on the field. She plays hard. She’s got a lot of skill, a lot of talent and a lot of room to grow. She’s got the heart of a competitor as Coach Whalen said. He’s right, you can’t teach that when you’ve got somebody who is a winner and has the heart to compete like that.”

The two-sport star at Volunteer has been playing softball since she was a tot.

“I’ve played (travel ball) every summer since I was seven or eight,” said Crawley. “I’ve been on it my whole life. Softball has been my sport. I love getting out and playing in the hot weather.”

At some point while she was at Surgoinsville Middle School, Crawley realized she could play the game pretty well. “I knew I was pretty good sixth and seventh grade year,” said Crawley, who starred in basketball and softball for SMS.

“She started as soon as she walked up here,” Strickler added. “She was in the starting lineup as a freshman.”

Crawley’s talent was on full display in the spring of 2019, her last full season on the field for Volunteer.

“I really broke out my sophomore year,” she said. “My sophomore year was my best year. I broke the school record in home runs and doubles. I knew then that this was something I wanted to do the rest of my life, the most I can.”

Crawley still has a senior season to play – depending on the situation with COVID, which wiped out her junior season.

“It was tough,” Crawley said. “It broke me. It hurt me in recruiting. It hurt me in every way it could. We got two and a half games in. It rained out one game. It was terrible. I wish we could have had that year. Volunteer would have been good.”

“She has a .390 career batting average,” Strickler said. “So, she’s had a good career. I think the best is still yet to come. We expect a lot of things out of her this year.”

Fortunately, two high school seasons and travel ball have been enough to showcase Crawley’s abilities without a junior season.

“We’re closer to the Knoxville area, but I’m very familiar with this area up here, as well,” Hackworth said. “I’ve gotten to see her play in travel ball. Travel ball has been a big plus for these kids this year, getting a chance to get back out there and perform and get in front of some college coaches. It was very beneficial. It helped us get a hold of her.”

Crawley knew soon after meeting Hackworth that Roane State was going to be her next home.

“I was at a travel ball tournament,” Crawley said. “She came up to me and talked to me after I played. She thought I was going somewhere else. She asked me if I was going there. I said, ‘No, I’m actually not committed anywhere.’

“The next day I came up – I had already left the ball park – she called my travel ball head coach (Annie Willis) and said, ‘Hey, I need her to get back in here now.’ I came back in and talked to her,” Crawley said.

“My friend, Courtney Willis, is up there right now. She went to Central. She kind of helped me out along the way with what to say. But this has nothing to do with my friend going up there. I knew Coach J (Hackworth) was going to work me from the start. She’s hard-nosed. I’ll know I’ll get better from now on,” Crawley said.

“We scheduled a visit. I went up there and visited and I loved it. I actually hung out with some of the girls a couple of weeks after I got my offer. The atmosphere is great. They all rock with each other. That’s what I need. I felt like they were my kind of people. I fit in really good. They all liked me and I liked all of them. It was the best option. I knew from the moment I picked it, it was the right choice,” Crawley said.

“She mixes really well with the players that we have in our program currently,” Hackworth said. “We’re looking to continue to grow, too. She’s going to do really good things for us. We’re excited to have her and excited to get her on campus. She’s a great kid. She’s got a great personality. That’s huge for us.”

“I can communicate well with my teammates,” Crawley said. “If somebody’s down, I can pick them up. If they need a laugh, I can give them a laugh. It’s just kind of my personality. I’m not ever getting down on anybody. I’m so bad at getting down on myself. But I can get anybody up in a heartbeat. That helps me throughout the whole ball game – it keeps everybody loose.”

“She’s been a pleasure to coach,” Strickler said. “I give her a hard time about talking all the time. She loves to talk. She’ll talk your ear off. I told the coach I was going to send a roll of tape so they can tape her mouth shut.”

Strickler was joking, of course. “If I had to go to war, I’d want that young lady right there,” he said. “She is a competitor.”

Crawley doesn’t just possess the right attitude and likeability. She has talent.

“She can play anywhere,” Strickler said. “She would be your ideal third baseman in college. She’s an outstanding outfielder, infielder – wherever you put her. She can do it all. She can handle the bat. She can bunt, so that’s going to help her. She can do a little bit of everything. She’s the type of kid, you just plug her in wherever you need her.”

“I can play about anywhere, but my strong suit is second base, then shortstop,” she said. “Those two are my home. I can tell you more about them than probably anybody could. I do so much studying of the game. Those are my favorite two positions.”

Hackworth is thinking along the same lines.

“Right now, we’re kind of looking shortstop/third base area,” Hackworth said. “That’s kind of where we had her working and where we’ve seen her play. That’s kind of what we’ve been looking at right now.

“But when it comes right down to it, it could be shortstop, it could be first, it could be anywhere. But that’s kind of what we’ve got planned for her – shortstop, middle infield area. She’s got a good arm. It’s hard to replace that,” she said.

Strickler thinks Crawley’s best is yet to come.

“When she gets to college and they get her on a regimen lifting weights and with her just concentrating on one sport, I think she can go on and play not only there, but after her two years, go on and play somewhere else,” he said.

“I think once she gets to college, she gets in there and gets her weight regimen and plan her time out a little bit better, sports don’t overrun one another, you’ll see her succeed even more. She’ll really go to the next level. I think she can play at D2, D1, NAIA. Roane State is getting a jewel. She’s a jewel,” he said.

“It being JUCO, I’m there for two years,” Crawley explained. “Then I want to get out and she’s going to push me to go to the highest level I can go. That’s what I want. I want to try to go as high as I can.”

Crawley isn’t sure what she’ll major in yet.

“I have not decided what I want to study yet. I wanted to go into physical therapy route, but I’ve had thoughts of other things, too,” she said.

“I think it’s a great fit for her, where she’s going,” Whalen said. “She’s getting it paid for, it’s not far from home and she’s got a great sports system with mom and dad, too. We’re tickled to death for her to be there. It’s going to be really good for her and for Roane.”

“She’s going to be hard to replace when she leaves,” said Smith, who hopes to get one more basketball season in with her without major COVID interruptions. “I’m going to cherish the time I have with her now. It’s crazy, you tell your girls it flies by. But as coaches, you say it to yourself, because she’s been an impact since I’ve been here, going on three years.

“She’s been a big part of this program. She’s a gym rat. She will figure it out. You tell her she can’t do it and she’s going to figure how to do it. Roane State got a good one. I’m proud of her and I can’t wait to see what she does there,” Smith said.

“Our kids work their tails off,” Hackworth said. “She won’t be any different. They get to grow as adults, as well. They’re growing into adulthood and getting used to what the adult life is about to be after high school. I think she is going to have a great opportunity to continue to her career and have a possibility to go play somewhere else.”

When that time comes, Crawley won’t forget her Volunteer days.

“Definitely how Coach Strickler always made me laugh,” she said. “He was always making me laugh. I’m really going to remember all the memories I made with all the girls from freshman year to my senior year, which hopefully this year I’ll be able to get my senior year in if COVID don’t happen.”

Crawley’s senior year goals shouldn’t surprise anyone who knows her.

“This year I want to get to know my teammates better,” she said. “Last year, because we lost a year, I don’t really know two years of my teammates. So, I’m going to have to learn them, learn what their strengths are, their weaknesses are and help them progress from there. And then hopefully we get to go somewhere in district and kick some butt.”