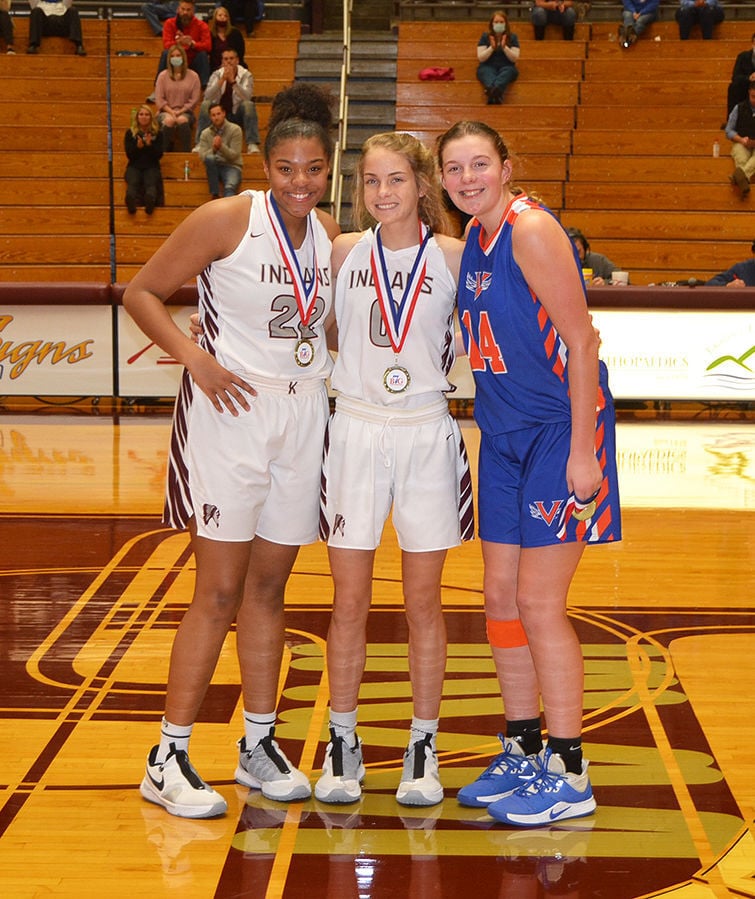 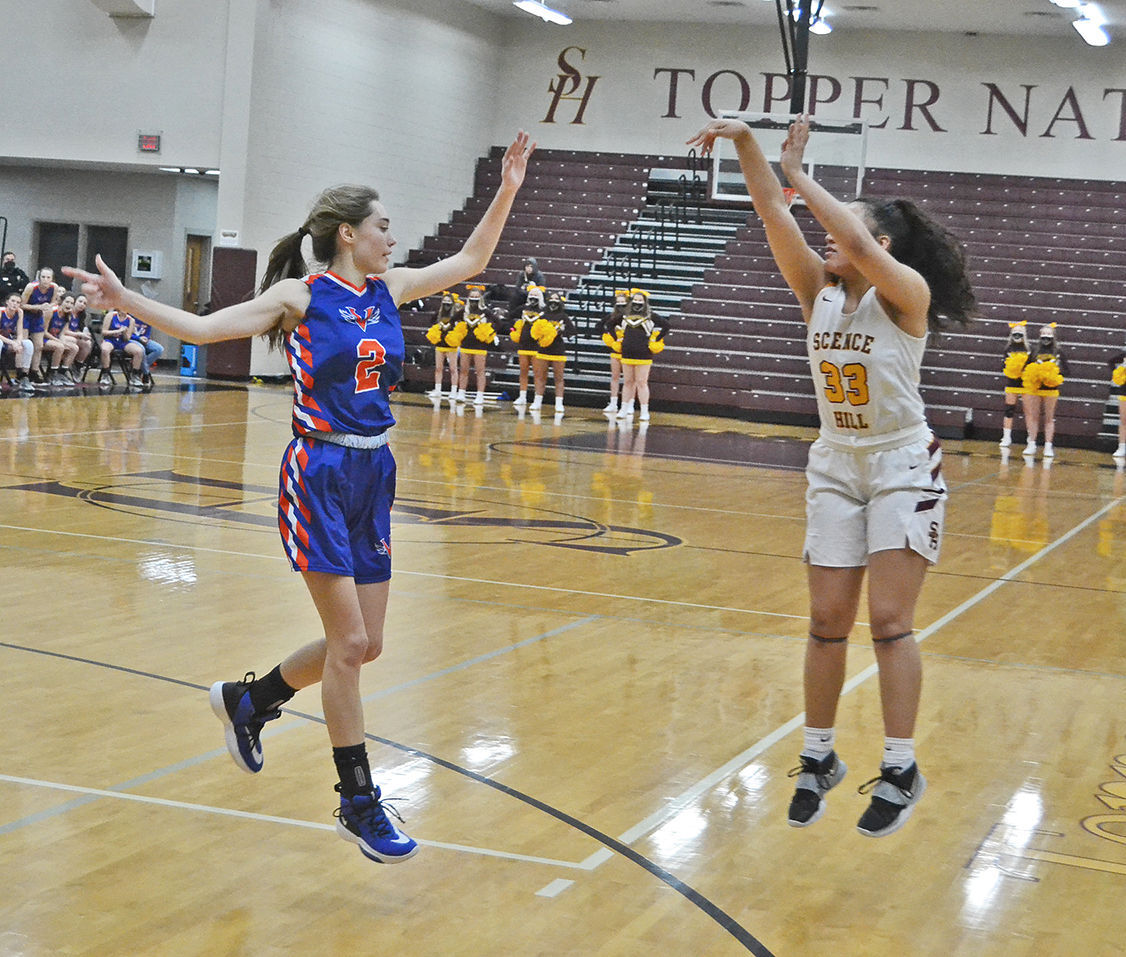 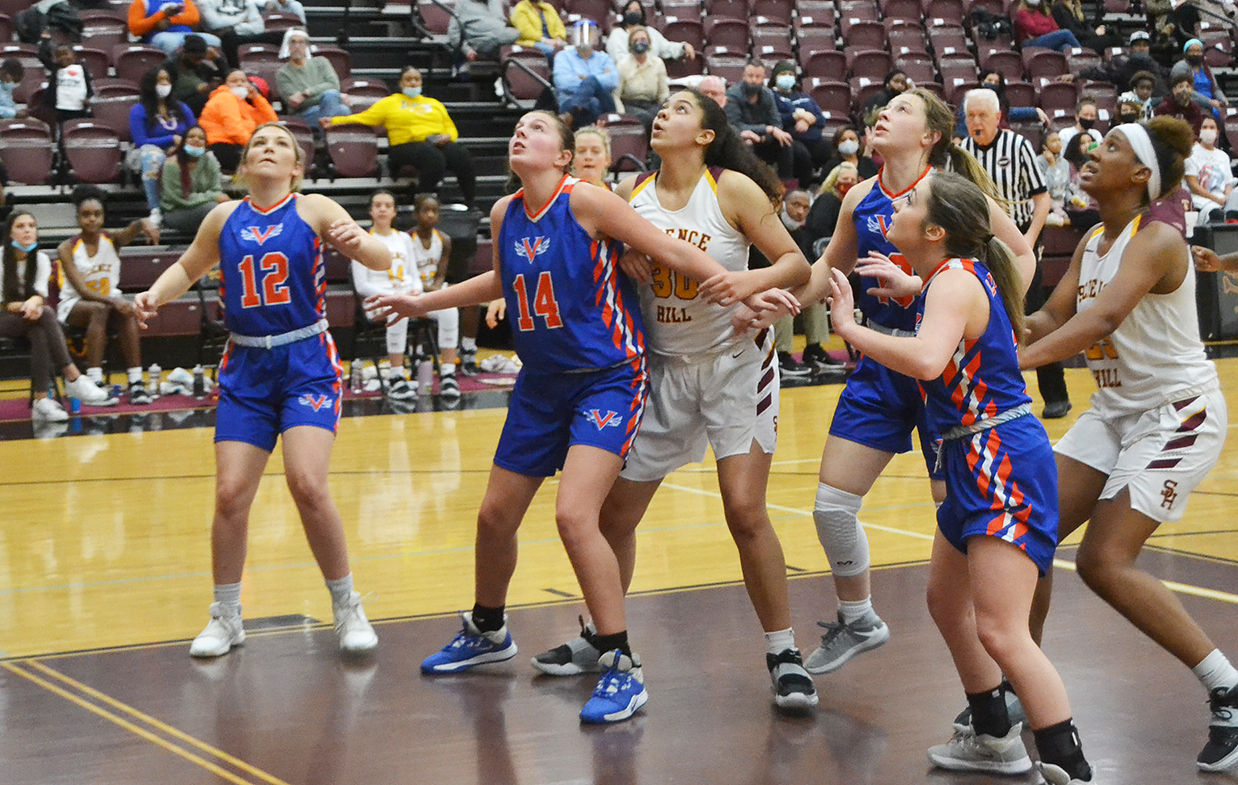 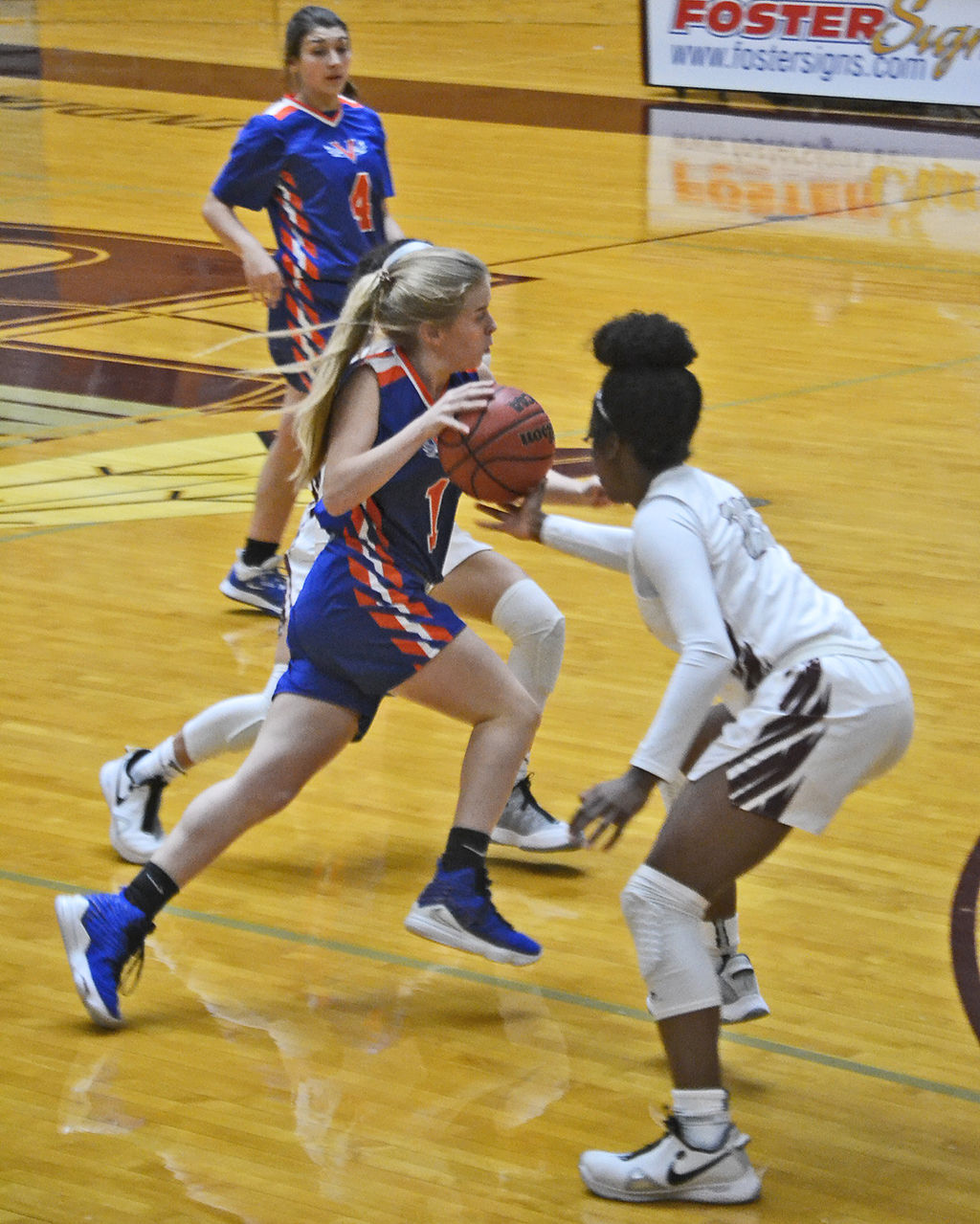 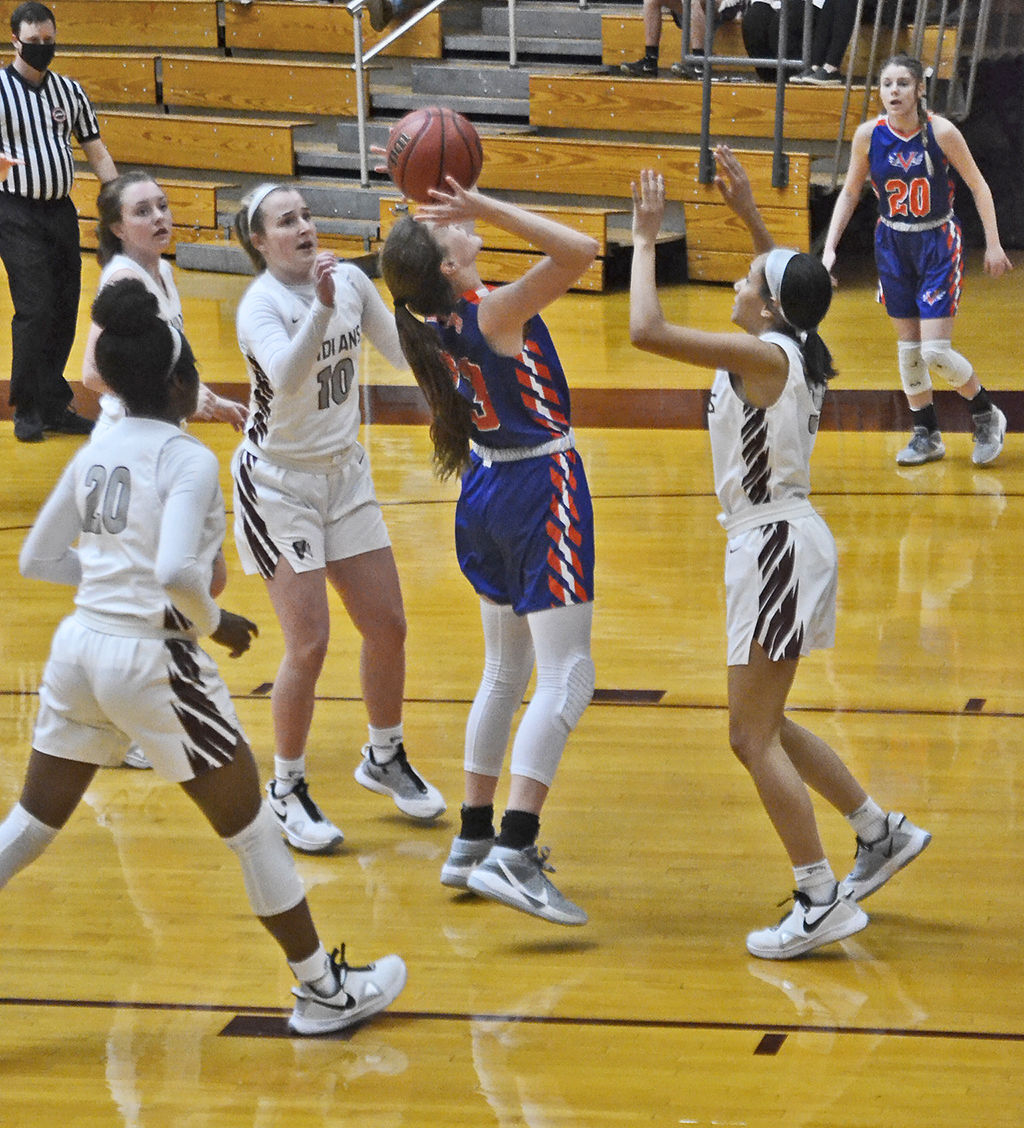 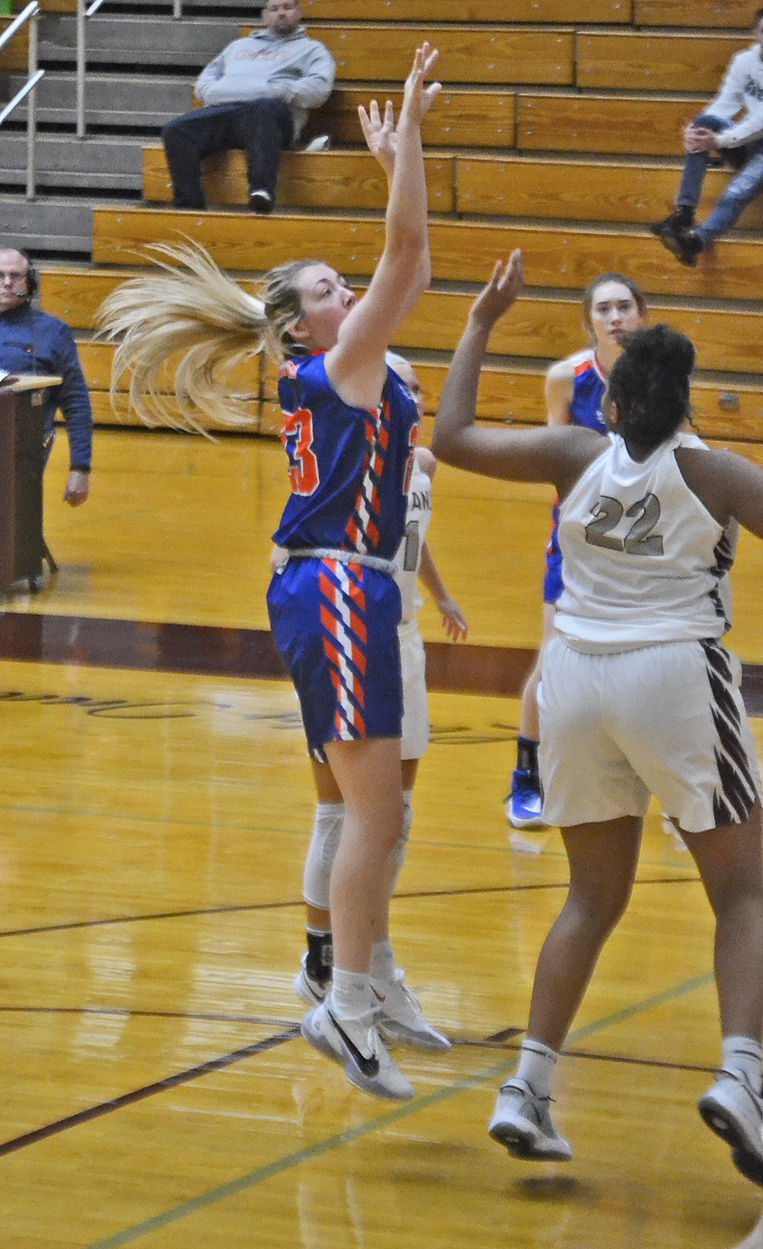 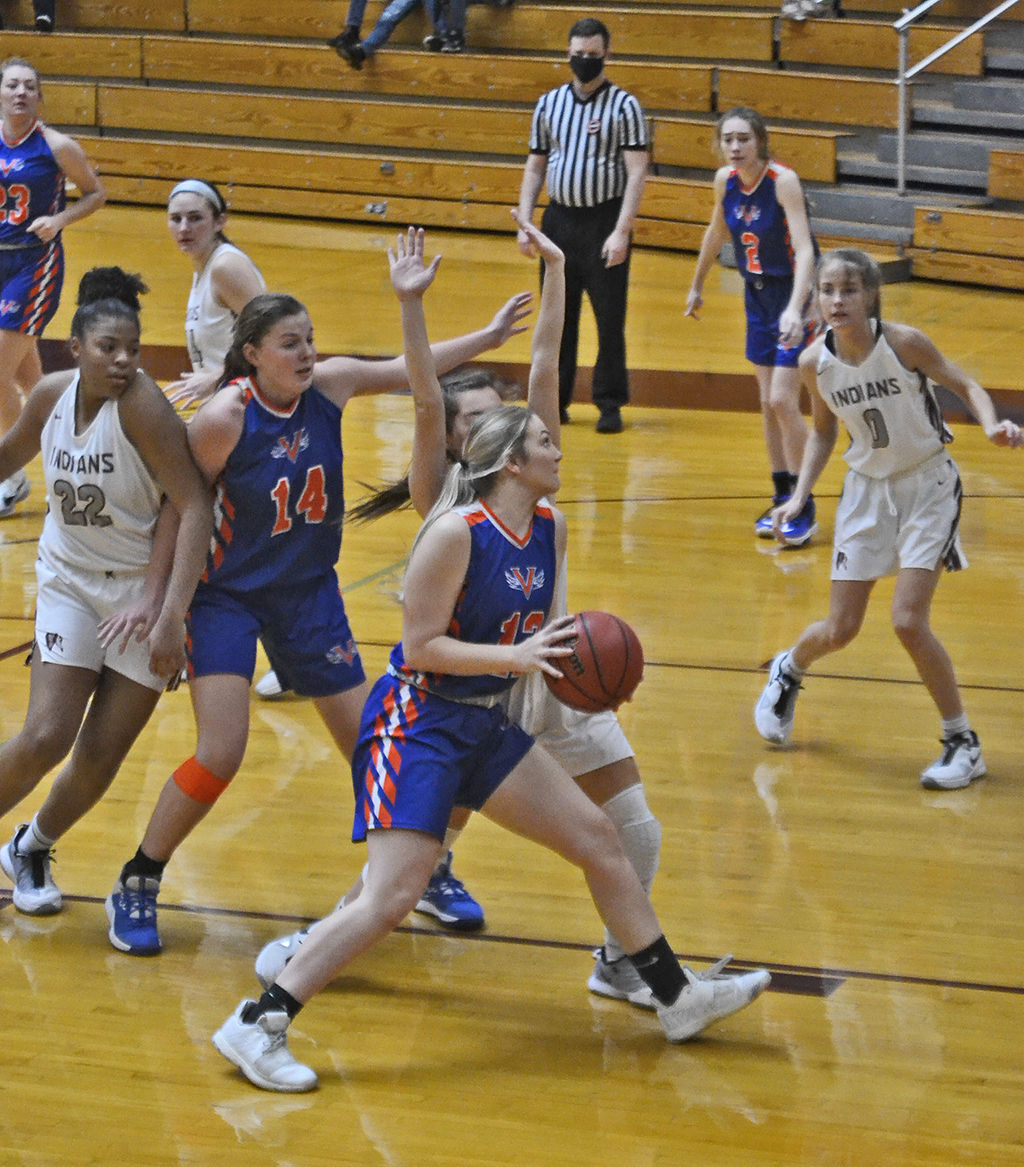 Volunteer’s Kenady Knittel (12) drives to the basket against Dobyns-Bennett during their District 1-AAA consolation game Friday. 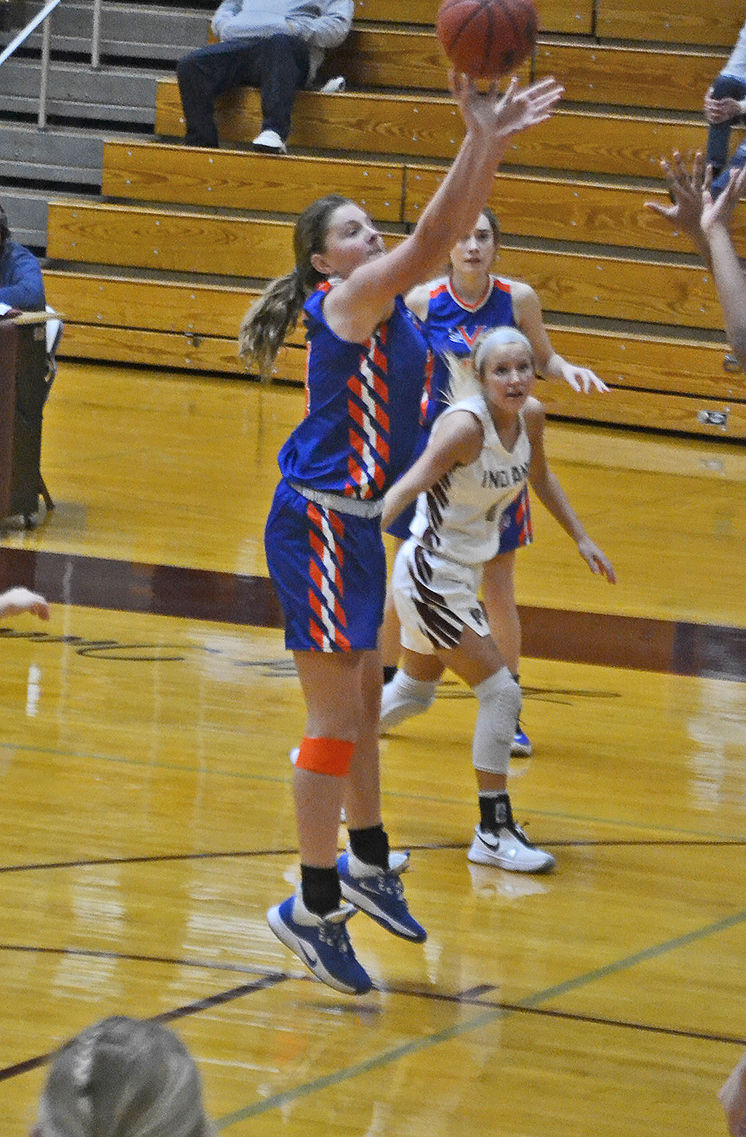 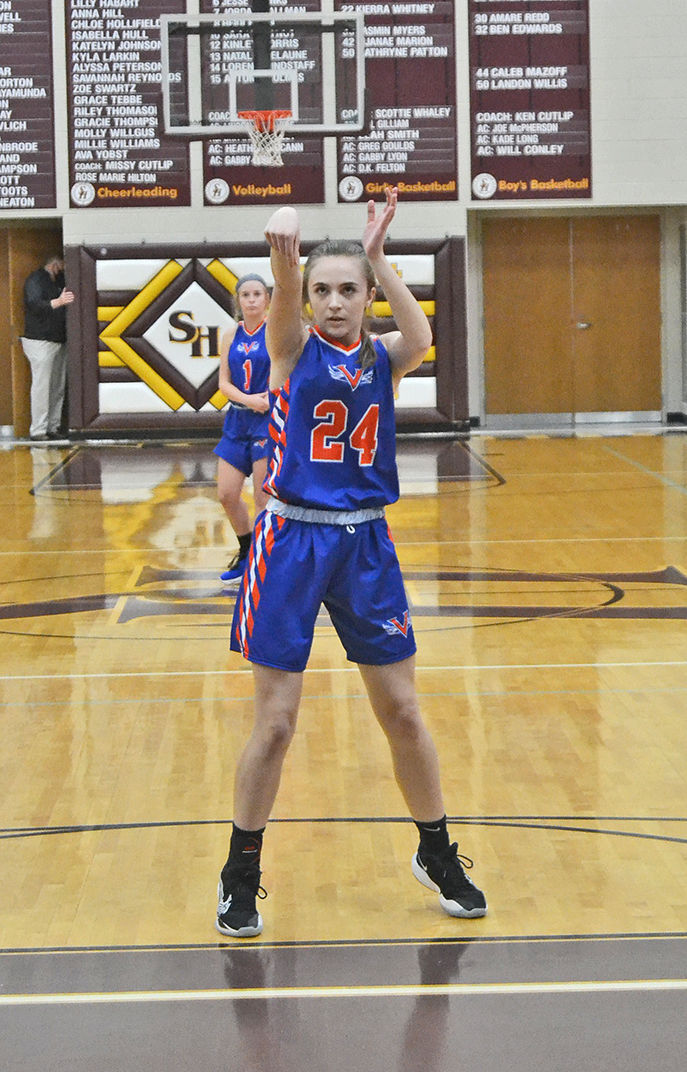 Volunteer’s Kenady Knittel (12) drives to the basket against Dobyns-Bennett during their District 1-AAA consolation game Friday.

KINGSPORT – Volunteer’s Lady Falcons tuned up for the Region 1-AAA girls basketball tournament with road games against the top two teams in District 1.

The 5-seeded Lady Falcons, who defeated 4-seed Tennessee High last Wednesday to qualify for the region, lost at top-seeded and eventual District 1 champion Science Hill on Thursday, 51-34, and to second-seeded Dobyns-Bennett on Friday, 58-25.

The Lady Indians, who were upset in the semifinal round to David Crockett, 43-40, used an 18-0 run to overcome a sluggish start and early five-point Lady Falcons lead en route to victory in the consolation game which determined District 1’s 3- and 4-seed for the Region, scheduled to begin Friday, Feb. 26.

After leading 26-15 at halftime, the Lady Indians smothered the Lady Falcons in the second half, outscoring the smaller, younger visitors in the third period, 19-3, to take a 45-18 lead into the fourth.

“But my girls played hard,” Smith said. “They didn’t quit. You hit a slump. We’ll get back in the gym and get ready for region. That’s one thing is we’ve still got games to play. So, we’re excited to still be playing.”

Olivia Doran led the way for Kingsport with 17 points, including five three-pointers. Jabrea Johnson added 10 points, seven rebounds and three assists. Both were name to the all-tournament team, along with Volunteer’s Veda Barton, who scored six and had nine rebounds. Aliyah Crawley led the Lady Falcons with nine points and four boards. Emily Wyatt scored eight off the bench.

While coaches and players always want to win games, securing the spot in the region was the most important thing accomplished in the district tournament.

“For this community, for this team, it means a lot,” Smith said. “That’s my goal since day one. It wasn’t to get to state, it was to get to the region. You’ve got to pick your battles. I’m proud of my girls. I’m proud of our program and where we’re going. Now we’ve touched the region and see what it is.”

JOHNSON CITY – The Lady Falcons fell behind early and were never able to dig out of the hole in the semifinal loss to the top-seeded Lady Toppers.

Science Hill ran out to a 17-8 lead in the first quarter, which proved to be enough of a cushion. The Lady Falcons kept within a decent pace of the regular-season champs the rest of the way, being outscored by only 34-26 the final three periods.

The Big 7 voted during the year to end the season earlier in an attempt to avoid COVID issues potentially affecting postseason deadlines. District 2 – which will provide the four opponents for the District 1 teams in the region – is just now beginning its district tournament. The region won’t start until Feb. 26.

“Now we can go back and get better,” Smith said. “Anybody can go on the road and beat anybody. We can go upset some people now. Being the 4th seed, it don’t matter if we’re first, second, third – it shows in this tournament, anybody can get beat any given day. So we’re excited just to go play and represent the Big 7 Conference.”

Being the 4-seed out of District 1, the Lady Falcons will face whomever wins the District 2 tournament. Smith said defeating the top seed from District 2 will require a well-played game.

“Just stick to the game plan, make shots and do all the little things and see where the chips fall,” he said. “We’ve got a whole week and a half to get ready, so I’m going to give my girls some rest. Let them not think about basketball for a couple of days and get back in the gym next week and get some shots up and get back into it.

“We’ll do some intra-squad stuff within. I don’t want anybody to get hurt. Just basically get shots up and find out who we’re gonna play and start scouting,” Smith said.