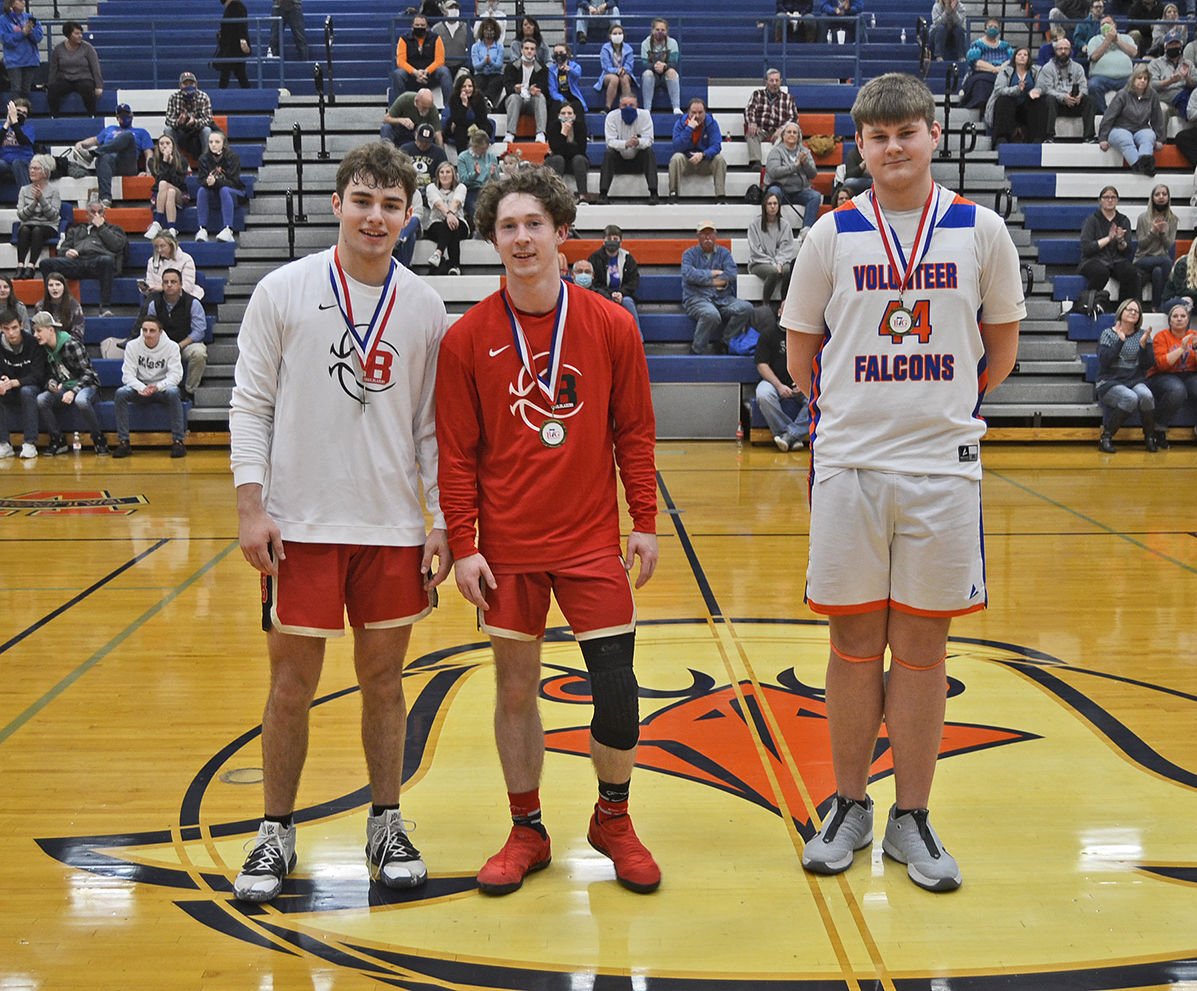 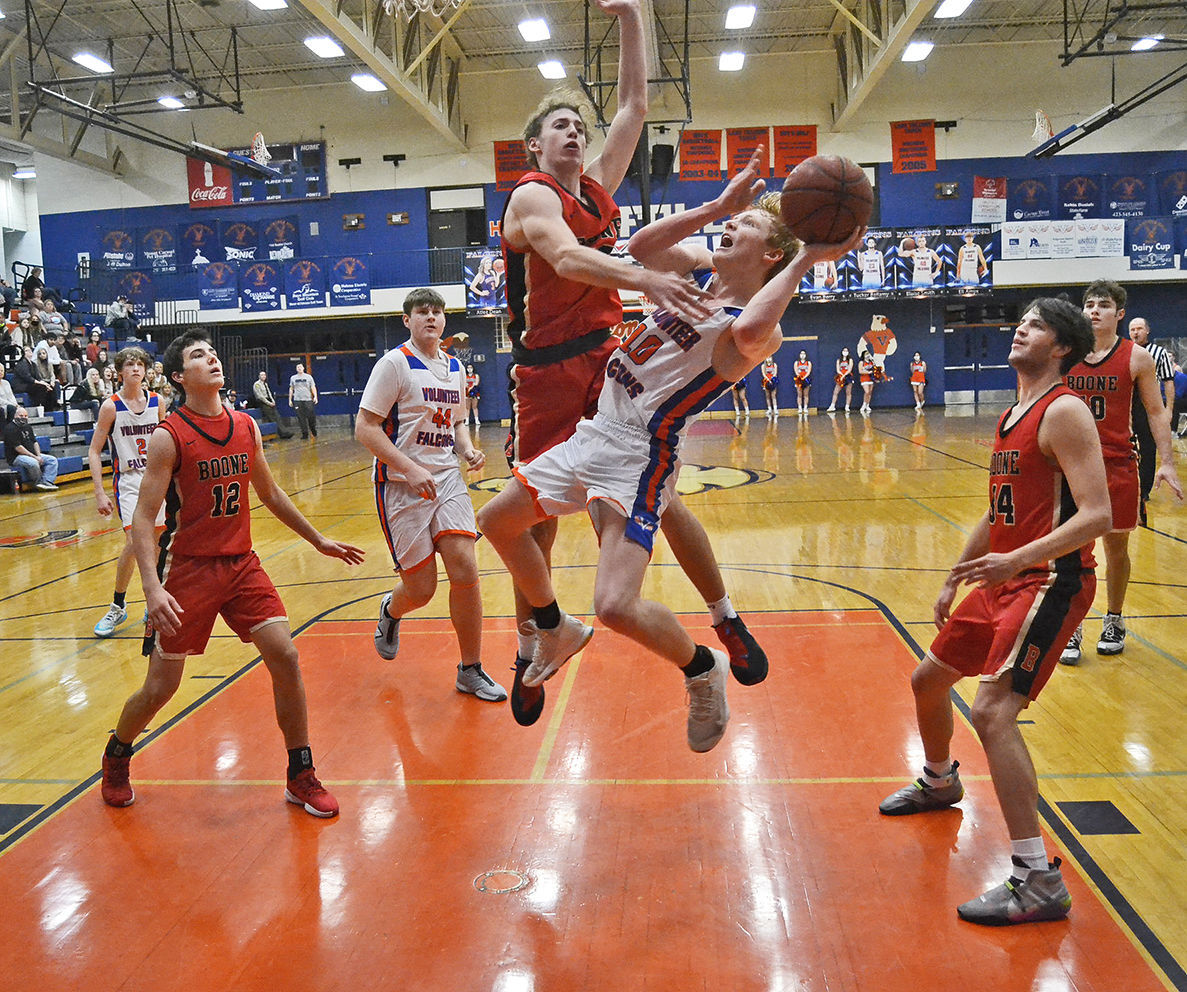 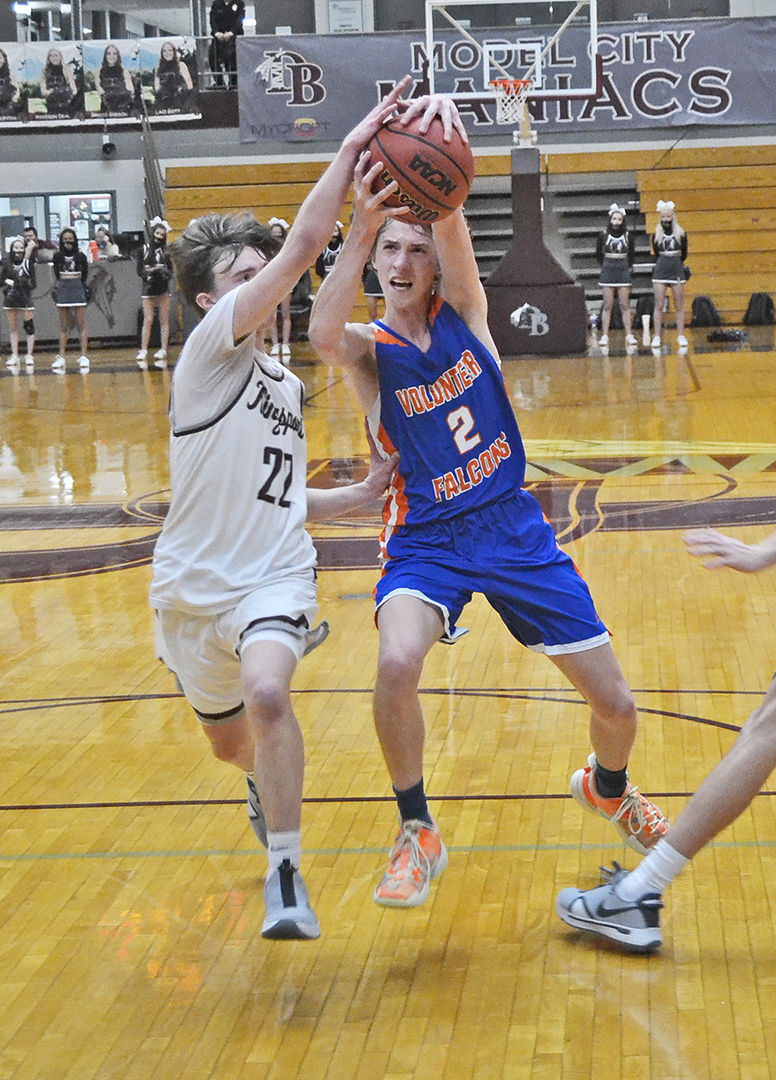 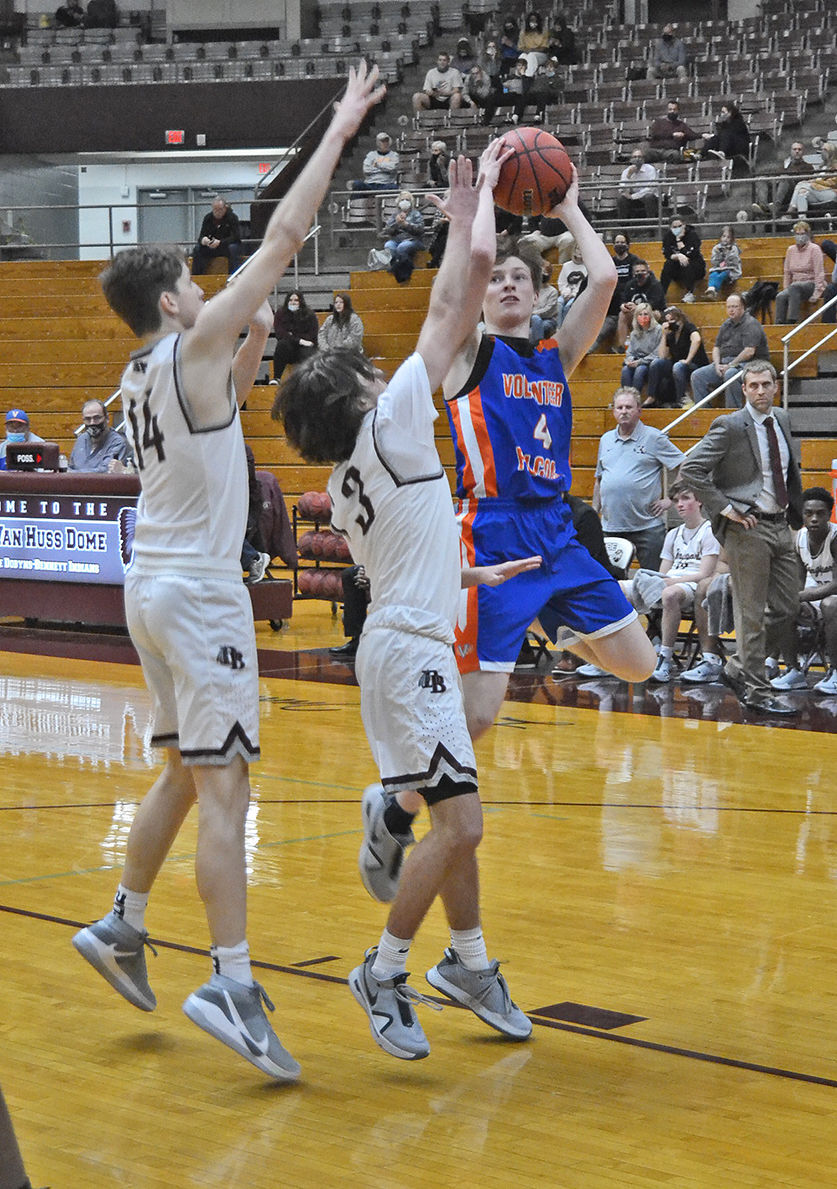 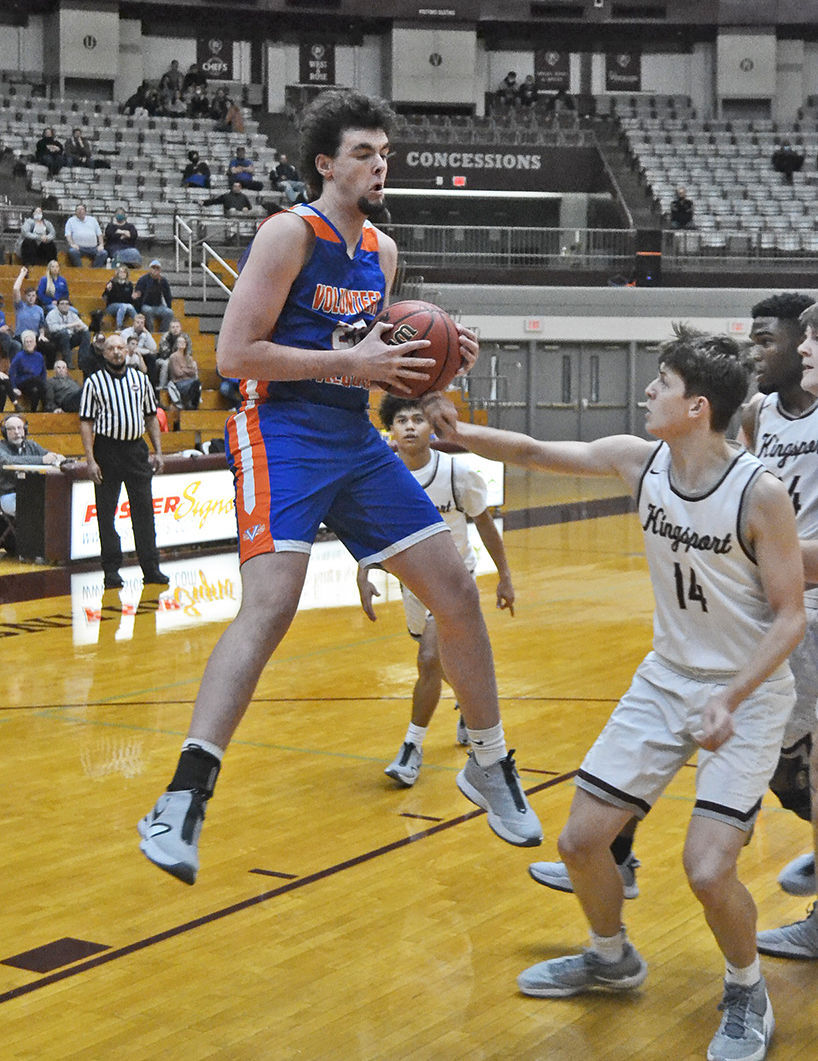 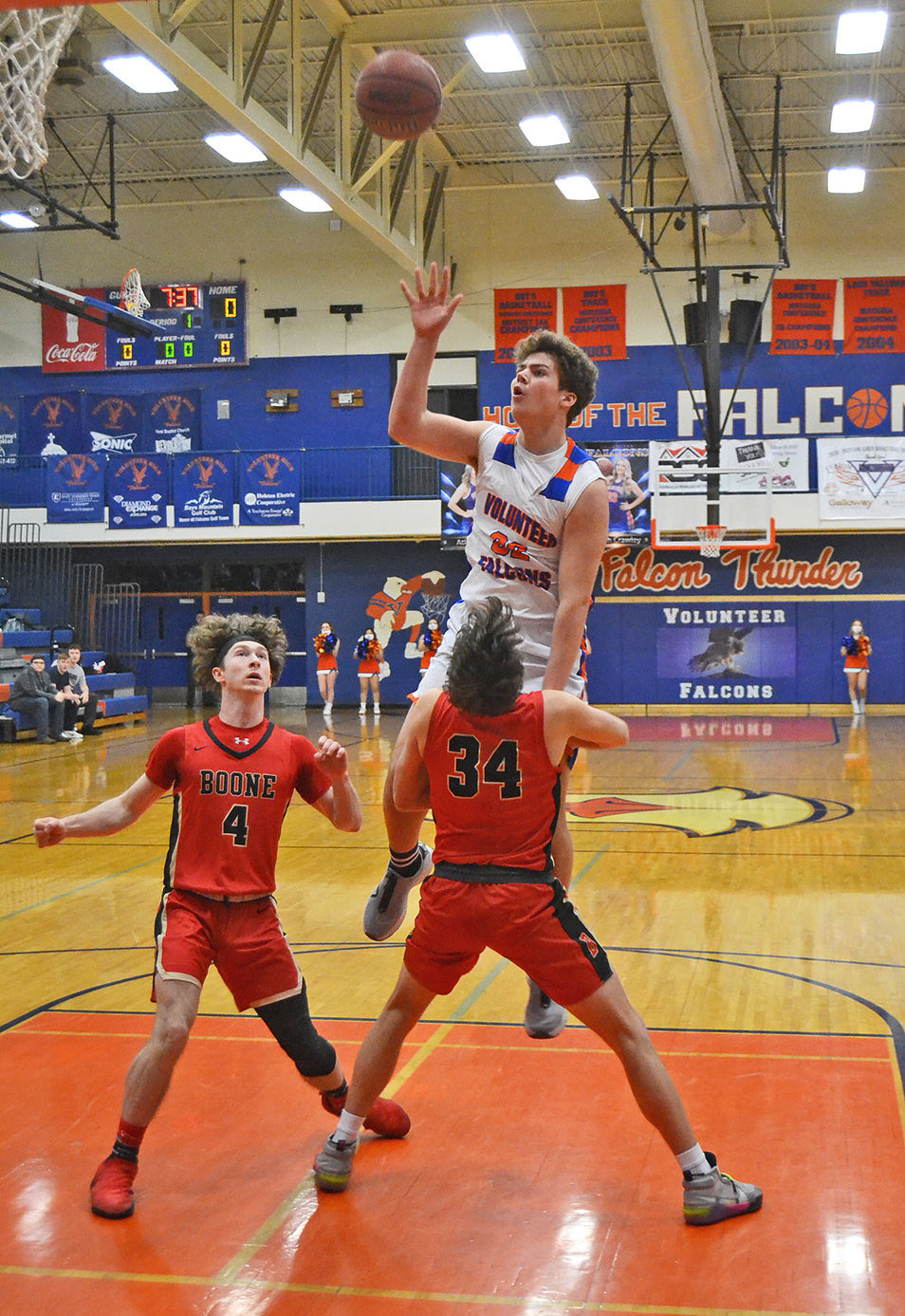 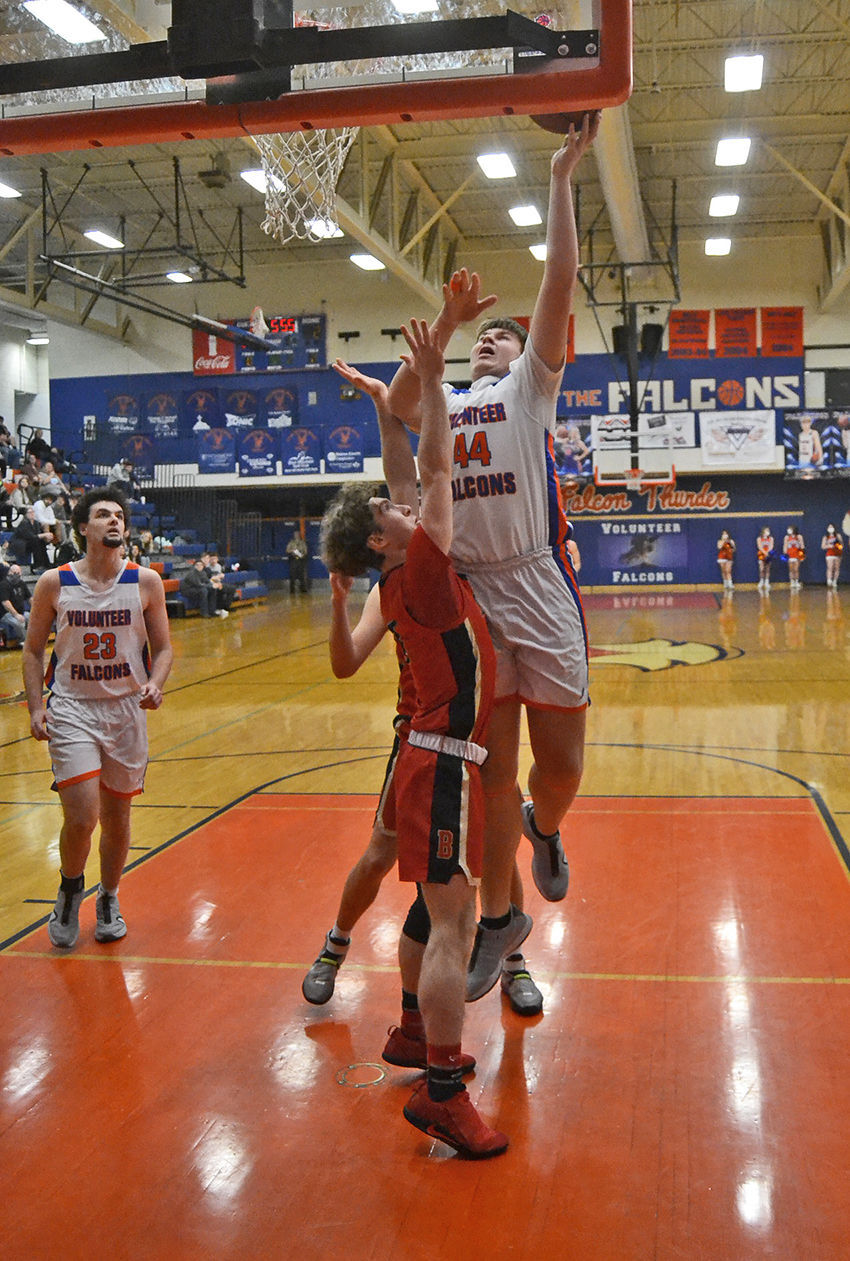 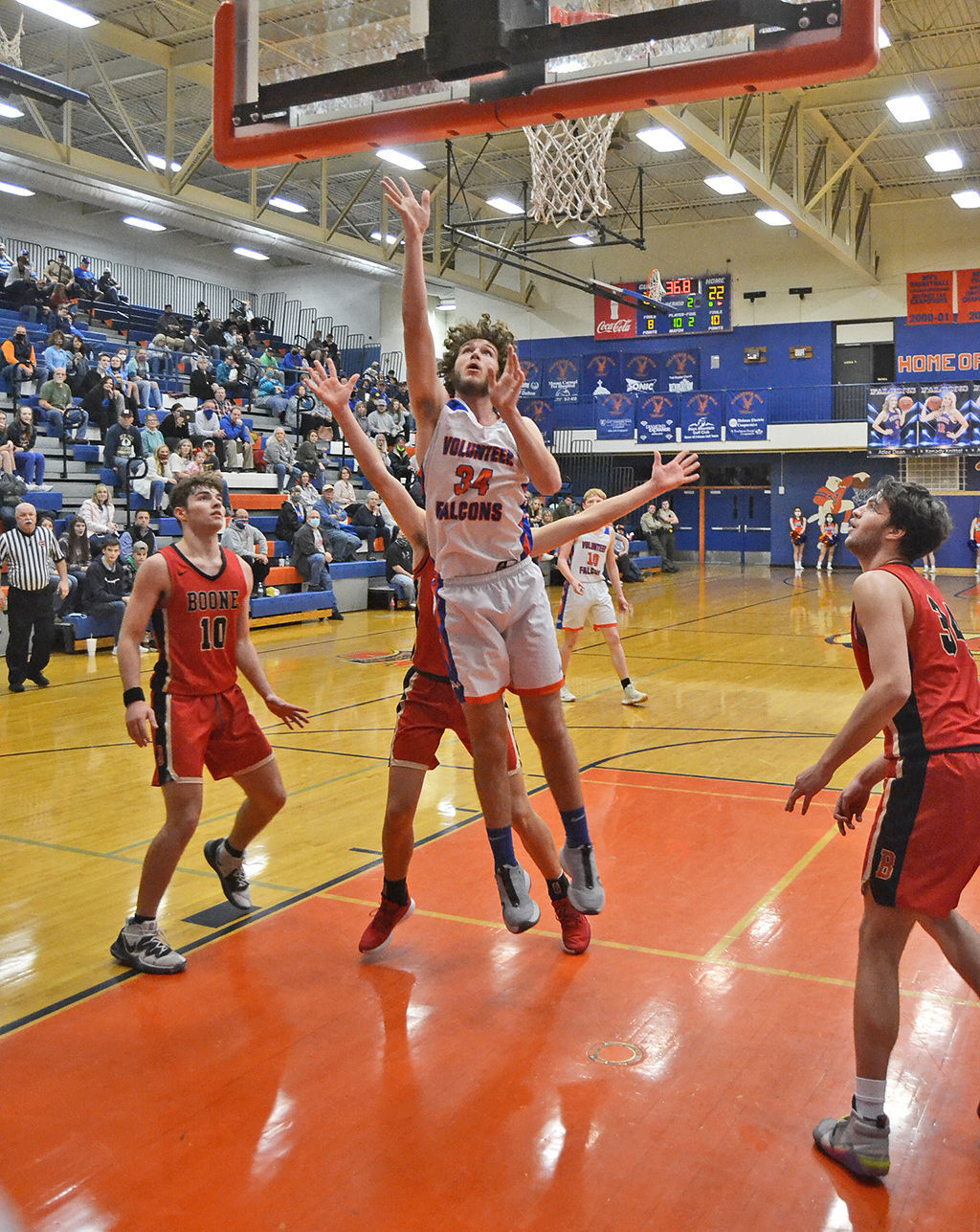 Volunteer’s Cason Christian (34) goes up for a layup against Daniel Boone in their District 1-AAA consolation game Friday at the Falcons Nest. 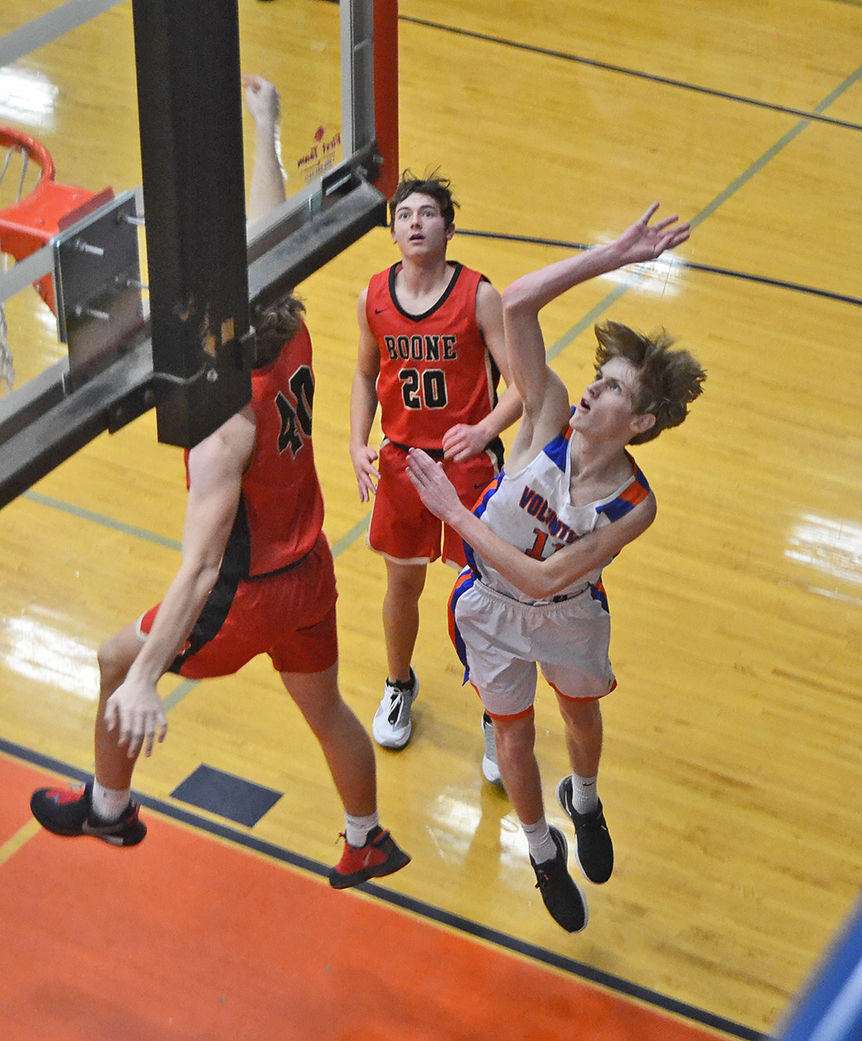 Volunteer’s Cason Christian (34) goes up for a layup against Daniel Boone in their District 1-AAA consolation game Friday at the Falcons Nest.

CHURCH HILL – A buzzer-beating three-pointer by Caleb Head gave Daniel Boone an emotional 42-39 win over Volunteer Friday at the Falcons Nest and sent the Trailblazers into the Region 1 tournament as District 1’s 3-seed and the Falcons as the 4-seed.

“I thought we played well,” said Volunteer coach Mike Poe, whose Falcons suffered two poor shooting nights in District 1’s final four play. “We look great when the ball’s going in. You look like you don’t know what you’re doing when it’s not.

“We probably had more turnovers than we had shots attempted in the first half. We definitely had our opportunities,” Poe said.

It was Knittel again sparking the Falcons in the third, scoring all six on a 6-2 Volunteer run to start the second half that put the Falcons in front, 30-23, with 5:35 left in the quarter.

The Falcons went cold, however, going scoreless the rest of the period as Boone closed to within 30-28 heading into the fourth. The ‘Blazers could have had a lead but were 0-for-6 in the quarter from the line.

Volunteer remained cold in the fourth, extending their basket-less streak from nearly the last four minutes of the third through the first three minutes of the fourth. Evan Berry’s basket off the glass after a steal ended the drought and cut the Boone lead to 35-33 with 4:56 left in the game.

A spin move in the post by Garrison Barrett tied the game and a free throw by Knittel gave Volunteer a 36-35 lead with 3:23 left.

Finally, Jon Wes Lovelace tied the game at 39 after hitting one of two at the line with :05.8 remaining.

After the Falcons used their last foul to give, Boone inbounded near half-court with :03 left. Gilliam set a screen for Head, who launched a high-arc three that hit nothing but net as the buzzer sounded, sending the ‘Blazers into a celebration and the Falcons to the 42-39 defeat and District 1’s 4-seed in the region.

“There’s not much really you can say,” Poe said. “You don’t make any shots whatsoever. We got the people we wanted to shoot it plenty of opportunities. There’s nothing to say but we didn’t put the ball in the basket. We played well enough to win. We didn’t make the shots when we got open looks. I thought both teams played extremely hard. Both teams wanted to win.

“You don’t shoot yourself out of it, you just gotta keep playing. I wouldn’t turn down the shots they took. I told them at halftime, as much effort as they’re giving me, if we take quick shots or threes, that’s fine with me. We’re playing a great pace and have got the game where we want it. The games when we’re making those shots, we look like we’re the greatest thing since sliced bread,” Poe said.

Head led Boone with 14. Gilliam added 13. After Knittel’s 20, Minton was next-highest scoring Falcon with five. Barrett and Eli Amyx had four each.

“We’ll get a chance to get rested and lick our wounds. Kids are resilient. They’ll bounce back. It hurts coaches a whole lot more than it does players,” Poe said.

KINSGPORT – The final score wasn’t really indicative of what was a four-point game in the fourth quarter.

After the Indians took a 5-0 lead, the Falcons battled back to within 8-7 late in the first, trailing 10-7 after one. The Falcons’ shooting woes continued in the second quarter, as D-B slowly built a 24-12 halftime advantage.

“We never were out of it,” Poe said. “We played well. They’re the eighth-leading scoring team in Tennessee, averaging 78 points a game and we’ve got ‘em at 24 at halftime. You’ve just got to score. I’ve never won any games, 2-0. You gotta put the ball in the basket.”

The Falcons finally started to do just that after the Indians built a 29-15 lead in the third.

Jon Wes Lovelace scored on a feed from Bradin Minton. After a Minton free throw and layup by D-B’s Malachai Hale, Knittel scored a layup after a nice spin move in the paint and Evan Berry nailed a three to cut the lead to eight, 31-23, with 2:46 in the quarter, prompting a D-B timeout.

Thirty seconds later, Minton had to sit with his fourth foul. D-B extended its lead to 39-28 on a drive by McKinley Tincher. But Heath Miller, who played nice minutes off the bench at point, scored with a drive and shot off the glass at the close of the period to cut the lead to 39-30.

After Knittel hit two of two from the line to open the fourth, Zane Whitson answered for D-B with a drive. Miller then score five straight points for the Falcons – a jumper off a turn-around, another shot off the glass, and one of two free throws that cut the D-B lead to 41-37 with 6:23 to play.

But as fast as the Falcons were back in it, they fell back out of it. D-B gave a glimpse of its offensive prowess with a 21-7 run to close the game.

Domed stadiums, like D-B’s Buck Van Huss Dome, sometimes give visiting teams problems shooting, especially if they aren’t used to shooting against such a background. Poe was asked the following night back at the Falcons Nest if the Falcons had been affected by the dome.

“That’s their home floor, that’s their thing,” Poe said. “You’d think we’d shoot better here (at Volunteer). We didn’t shoot any better here than we did up there last night. There’s no excuses.”

While District 2 wraps up its regular season and plays its district tournament, the Falcons and three other District 1 teams now wait two weeks between games before lacing up for the region, thanks to the Big 7’s in-season rescheduling.

“They haven’t even started theirs yet,” Poe said. “This has never happened before. I don’t know why they did it. Their reasoning is in case somebody gets COVID and gives it to one of the others, then you’ve got two weeks to get through the quarantine so that you get to play.

“But that’s not going to help anything about being in school – heck, you could contract it in school. I thought we should have went ahead and played the way it was scheduled,” Poe said.

“Not anybody else,” he said. “We can scrimmage each other. I want to take a few days off first.”

While the Falcons practice, they’ll monitor what’s happening in the District 2 tournament.

“They’ve got some great teams,” Poe said. “It’s a pretty balanced league. I know Morristown East and Sevier County are kind of heads and shoulders above the others. I think Jeff County and South Doyle are probably the next two best teams.

“It doesn’t really matter. When you get to postseason, you play whoever’s next. I just hope that we play better than we’ve played these last two nights,” Poe said.