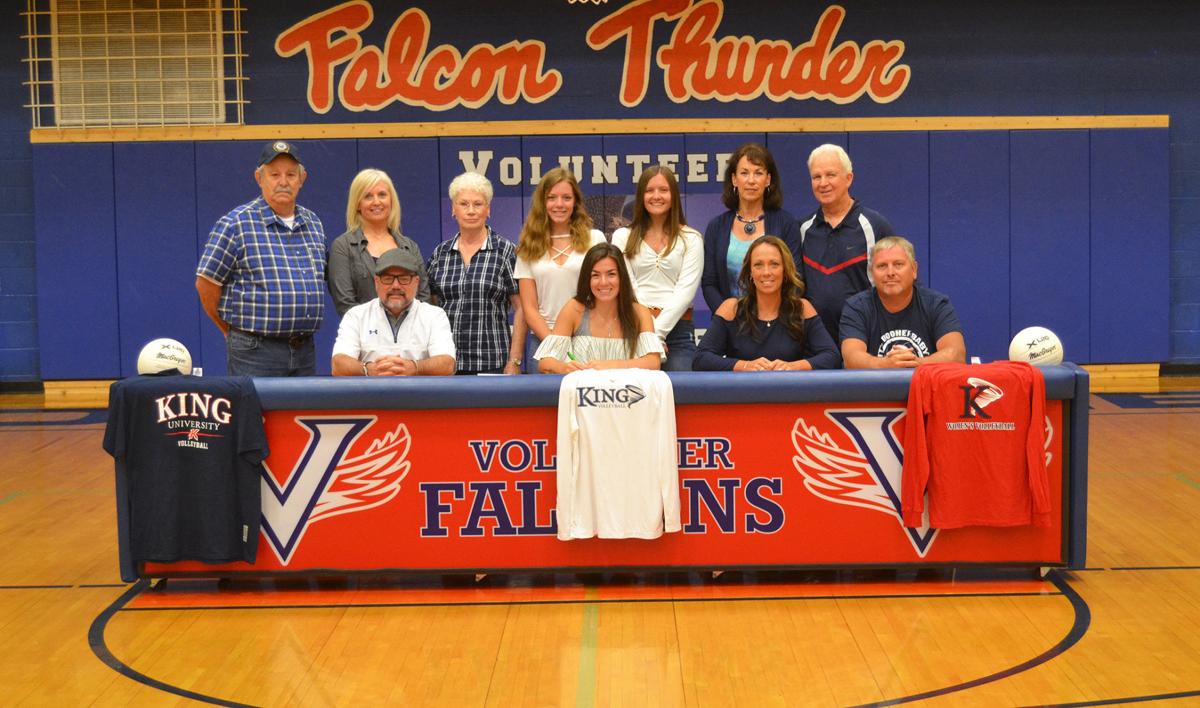 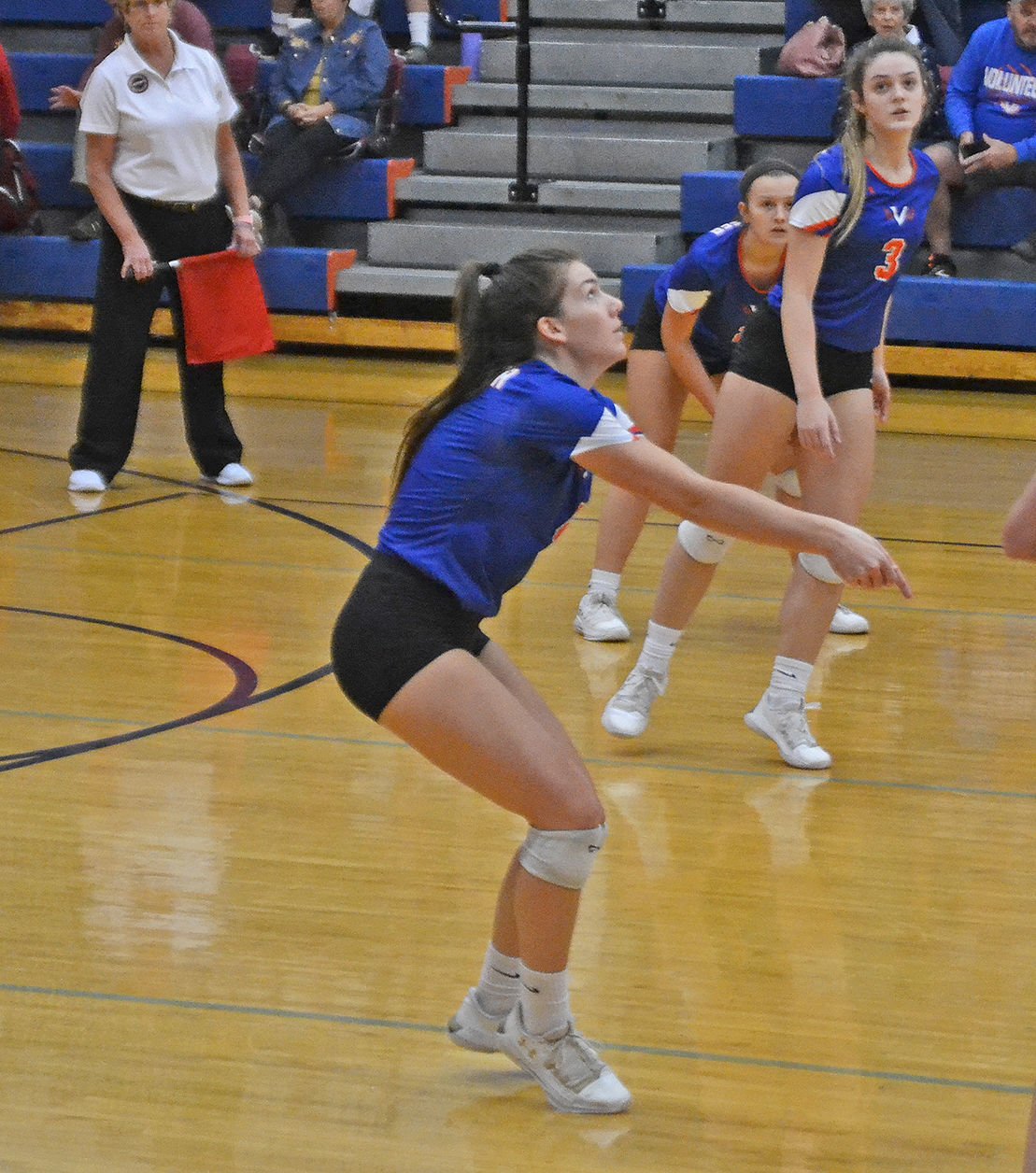 Volunteer’s Jersey Wines sets for a teammate during district tournament match against Dobyns-Bennett on Oct. 8 at Volunteer. 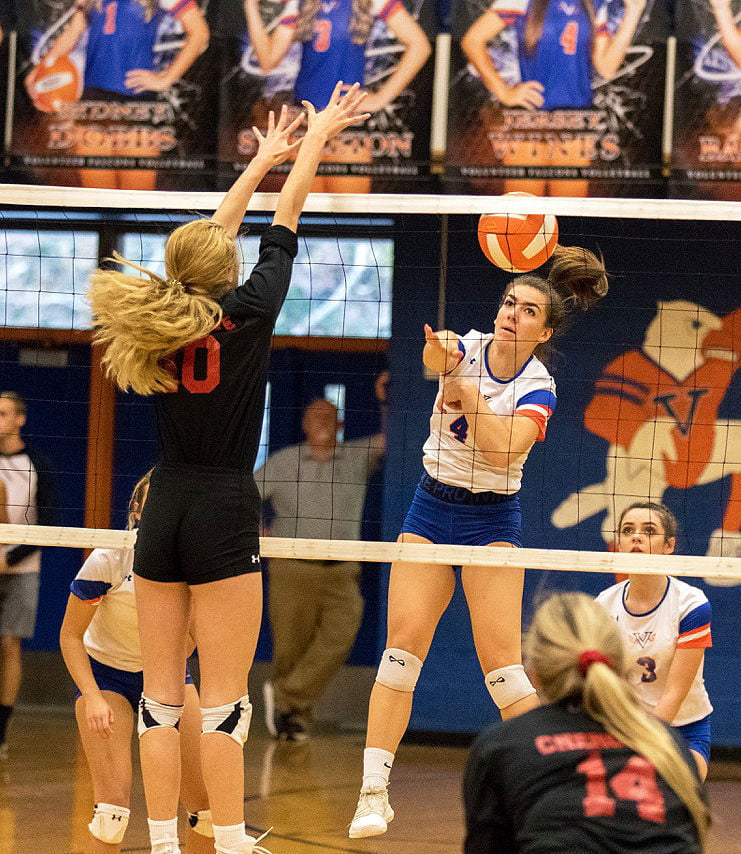 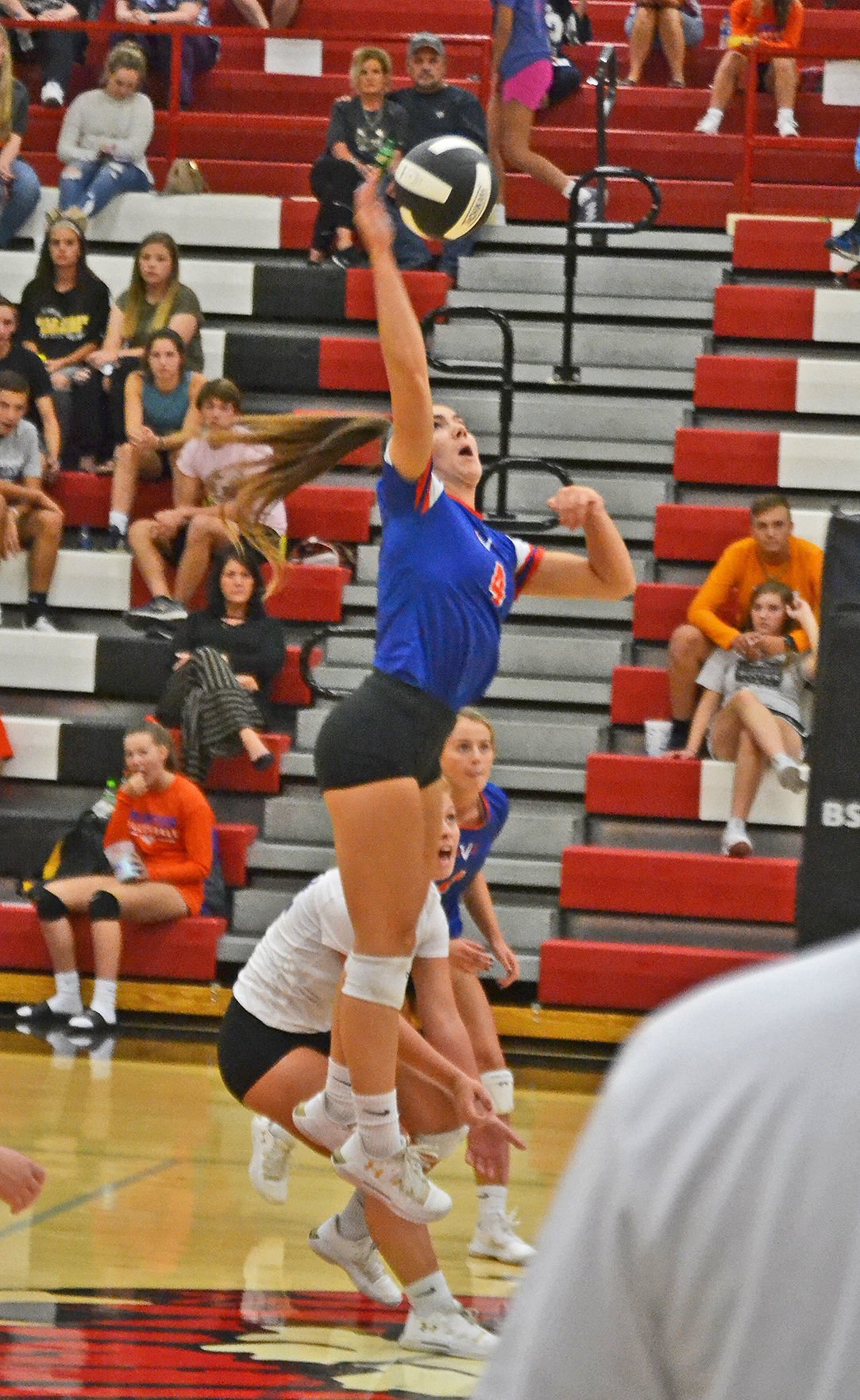 Jersey Wines goes for a kill at Cherokee Sept. 9. 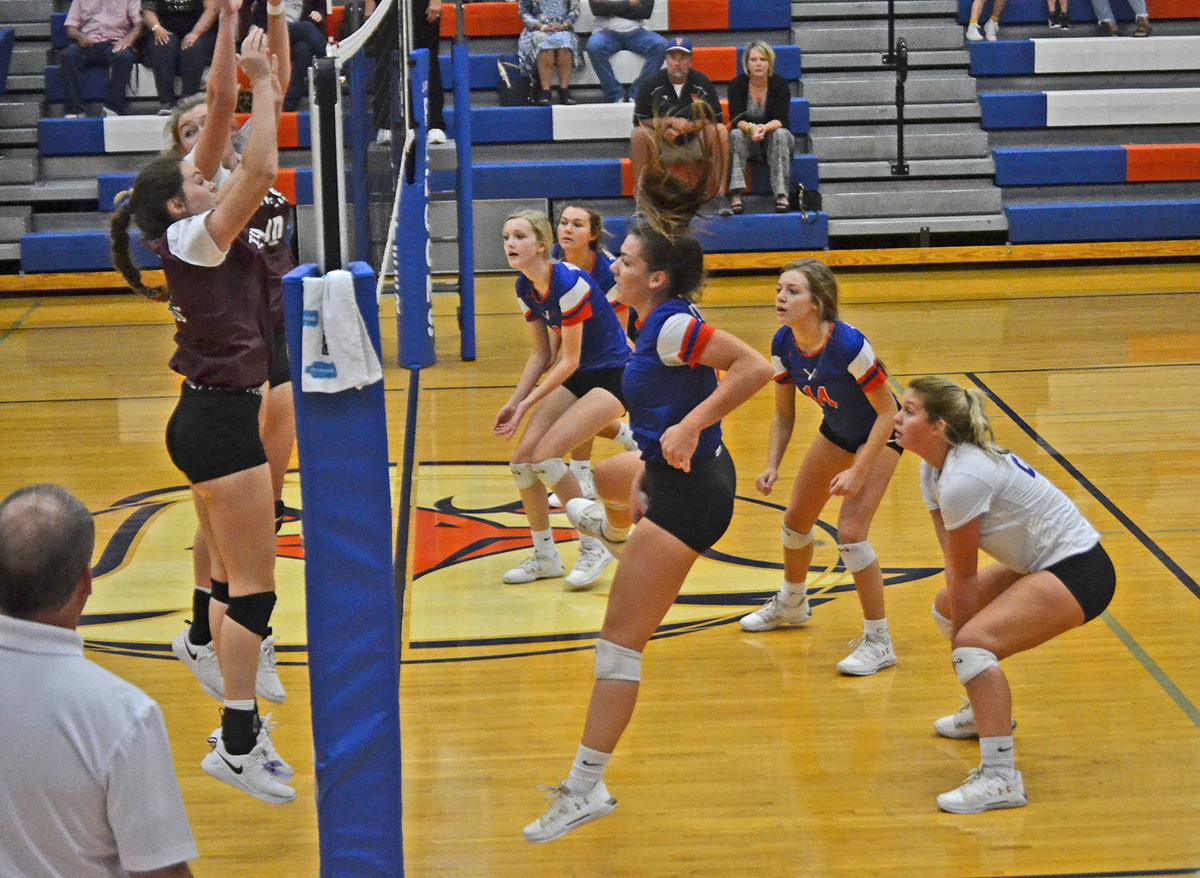 Volunteer’s Jersey Wines goes for the kill in district play against Tennessee High Oct. 7 at Volunteer.

Volunteer’s Jersey Wines sets for a teammate during district tournament match against Dobyns-Bennett on Oct. 8 at Volunteer.

Jersey Wines goes for a kill at Cherokee Sept. 9.

Volunteer’s Jersey Wines goes for the kill in district play against Tennessee High Oct. 7 at Volunteer.

CHURCH HILL – Jersey Wines took the first step of fulfilling a lifetime dream of playing college volleyball when she signed a letter of intent to play for King University.

Tuesday, she gathered with family and friends at Volunteer’s gym for a signing ceremony to celebrate the occasion.

“I’m feeling really blessed that I even get a chance to sign because once COVID-19 got started, I didn’t think I’d get a chance to sign,” Wines said. “Just to be able to have a day where I can show everybody what I’ve accomplished in all my playing time in four years of high school volleyball paid off.”

“I’ve always wanted to play college ball at a higher level. Playing at a Division 2 school with a coach that I know is just that,” Wines said, adding that she likes “the team dynamic and how the team is run.”

Wines, a three-year starter at shortstop for Volunteer’s softball team, chose not to play her senior year.

“I took a lot of time before my senior year to think about it and I decided if I wanted to play volleyball at the next level, it was best for me to focus on that and not risk an injury,” Wines said.

“I started talking to King last year after volleyball ended and kind of pushed it to the side to see what other options I had. I talked to the coach about two months ago and decided that was going to be the place for me,” she said.

“I’m feeling like there’s a 200-pound weight lifted off me and I think she has made the absolute best decision ever,” said Tennille Green, Jersey’s mother and volleyball coach the past season at Volunteer. “She had a hard time figuring all this stuff out. It was a lot of stress on her.

“I told her I knew it was a lot of stress. It was hard for me,” said Green, who played volleyball for East Tennessee State University from 1995-98 after graduating from Sullivan South. “It’s a stressful time. You’re on edge a lot. That’s your future. That’s what you plan on being for at least the next four years.

“Coach Booher is going to do a tremendous job. He is also like me. He has very high expectations of his girls. But those are his girls. He is very family-oriented. I think Jersey made the best choice,” Green said.

“She got everything paid for except room and board. But right now, she’s planning on living at home just to save up a little money and take it from there. She got an excellent deal. I’m so proud,” Green said.

“They’re getting a great person,” Volunteer Athletic Director Jim Whalen said at Tuesday’s ceremony. “Most of us here have known Jersey since she was tiny, running around.

“My first memories of her was elementary track meets where she was the fastest kid in the county. Everybody knew who Jersey Wines was when you went to those track meets. I got to coach Jersey a little bit in some travel ball. I got to teach Jersey. I’ve known her for a while,” he said.

“She’s got a great opportunity. She’ll be close to home. Her family will get to go see her. She’s going to get a quality education at King. We’re really happy for her,” said Whalen.

“It’s been a dream,” she said. “Mamas don’t get to coach their daughters, especially at the high school level.”

That wasn’t the extent of their time together on the volleyball court.

“Jersey and I play doubles outdoors together. We are a team in the summer in the Kingsport Outdoor League the last three summers and we’ll try to get in outdoor tournaments on weekends if we’re not doing something. It was fun,” Green said.

Steven M. Sipple: How will Moos be judged as Husker AD? The pandemic will have large say

“We’re both very competitive and we always want to win. We’re always trying to better our game and at the same time have that mother-daughter experience. We get along really well. I did the same thing with my mom. And my mom – Tina Cox – plays with us in the Eastman League. We all play together,” Green said.

“It’s definitely my favorite sport,” Jersey said. “I’ve played it ever since I could hold a ball. It’s not just a one-person sport. You have to rely on your teammates. You have to communicate better than any other sport or it doesn’t work. Whenever I’m out there I know I can be a leader. I like to be the loudest on the court.”

“Jersey, in the last year-and-a-half, two years, something has clicked in her,” Green said. “The real big competitiveness has clicked in her. So, Jersey figured out that she had to do some on her own. She knows that my expectations for her and all the other girls are very high.

“Jersey just took that, wrapped around it and soared with it. She did conditioning, lifting, a lot of stuff at home. She’d ask questions. She’d research different exercises and stuff. She’d ask me a lot of things. She did a lot on her own,” Green said.

Jersey said it wasn’t difficult going to school with parents in such prominent positions. Beside Green being volleyball coach, her father, Bobby Wines, is Volunteer’s principal.

“It might seem like it’s hard, but I’ve always been used to it,” she said. “I really like it because it gives me a little bit of an extra challenge and pushes me to be who I am” – and behave?

“Yeah,” she laughed, “which I think is good going into college, because I’m already disciplined and I already know what is expected of me.”

Jersey already knows what to expect of herself.

“I’m going to major in elementary education,” Wines said. “As long as I get to be with kids, I’ll be happy. If I could be in an elementary school, that would be perfect.”

“I want to stay around this area,” she said. “It’s where I grew up and I like where I am. I don’t feel like I want to change that.”

Jersey said her parents’ positions may have influenced her toward education, but that they didn’t push her. She said based on her experience, “I think I’ll be an understanding teacher.”

Wines said her most prominent memories of Volunteer will “probably (be) the friendships that I made, not just in school, but in sports, and my big accomplishments like getting defensive player of the year and qualifying for substate (in 2017), and the people I’ve done it with. That’s what I’ll remember the most.”

The unusual, premature end to her high school career gave her time to think.

“There’s a lot of reflection time that goes with it,” she said. “Because once you don’t have anything else to do besides school, you kind of sit back and you’re like, ‘that went by really fast.’ I kind of wish I would have enjoyed when I had been. The most exciting time for seniors was taken away from everybody.”

The coronavirus shutdown has taught her a lesson, she said.

“Don’t take anything for granted,” Wines said. “If you don’t put your heart into everything you do, you are not going to be happy with any outcomes that you have.”