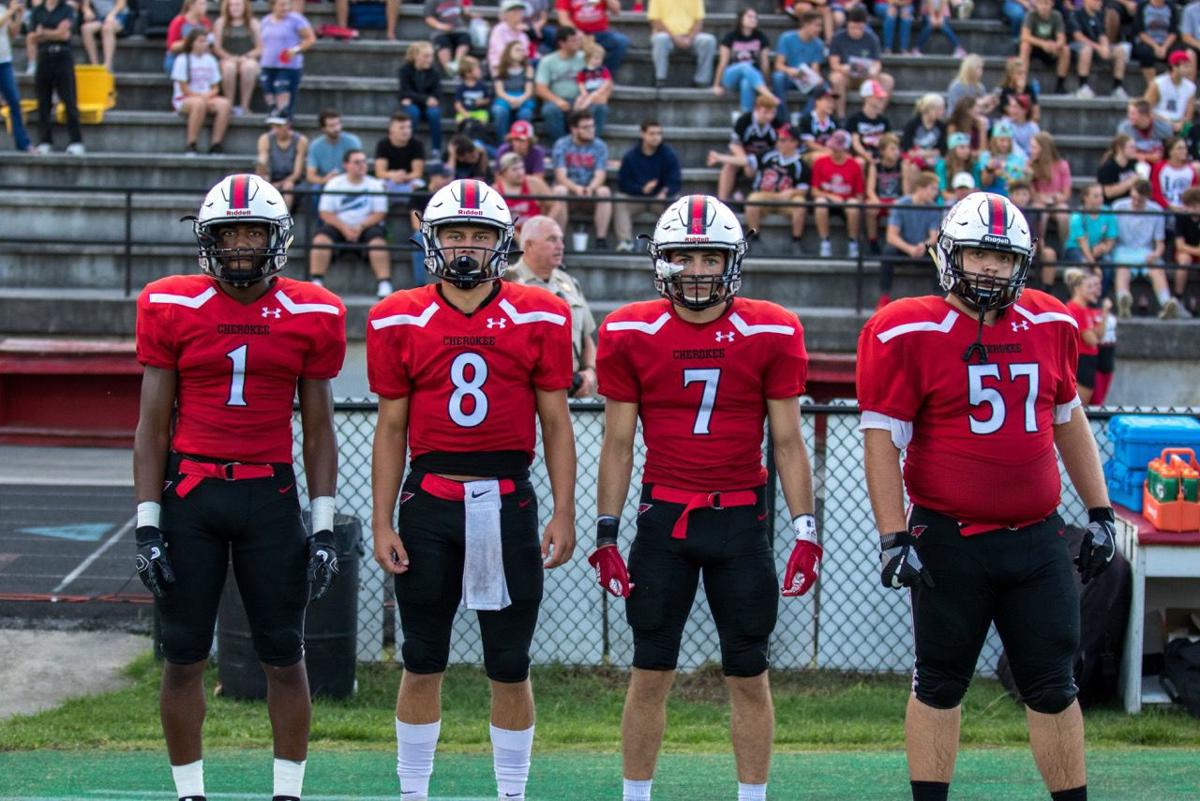 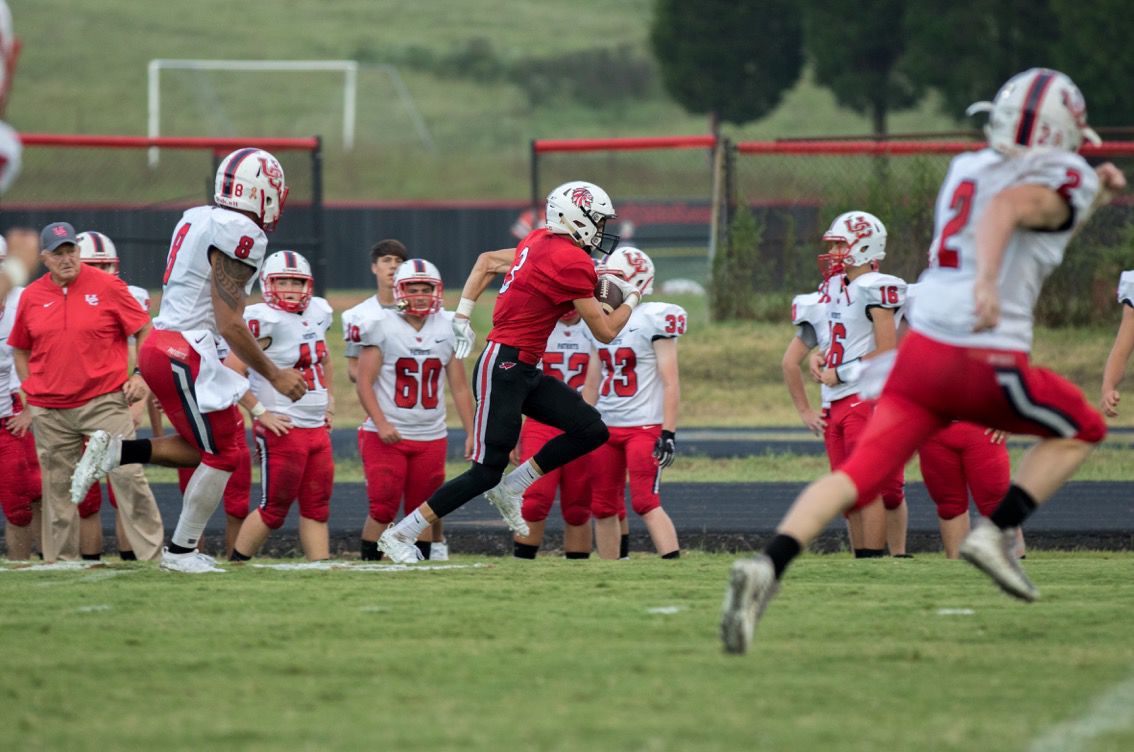 Cherokee receiver Austin Hamblen races down the sideline on a 56-yard pass play from Collin Trent. 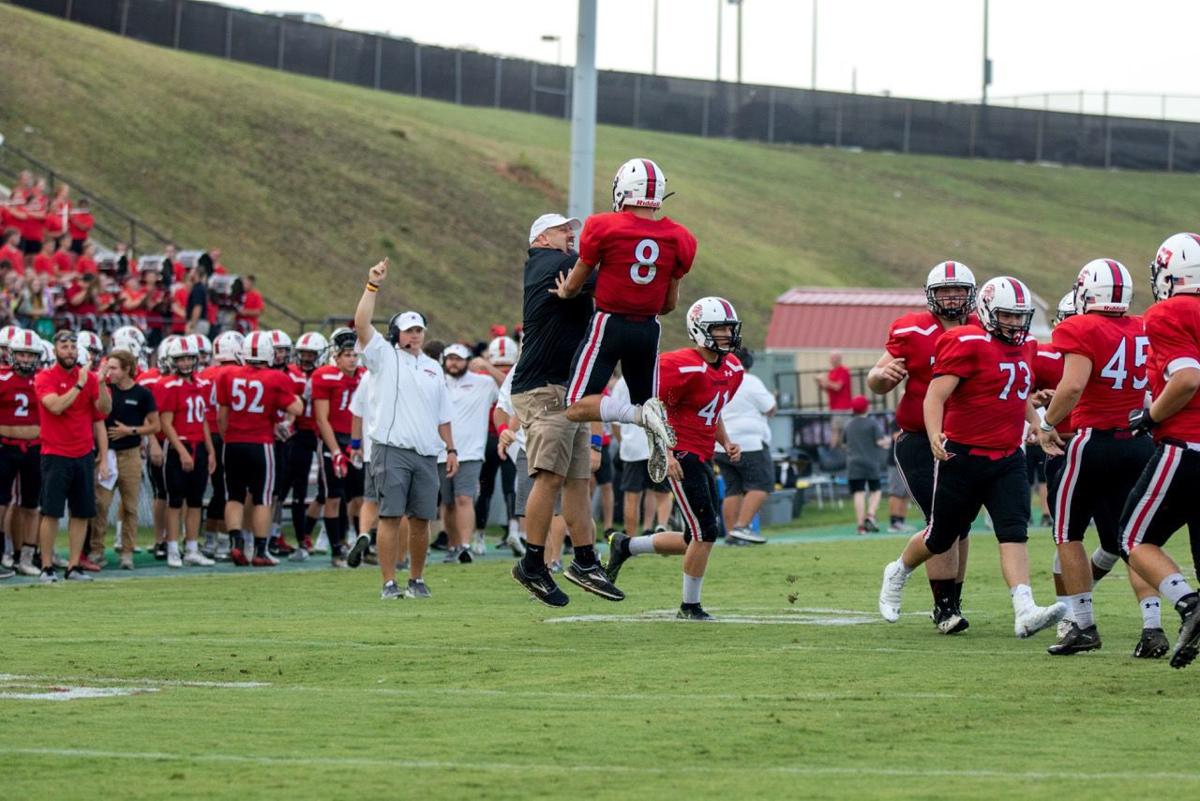 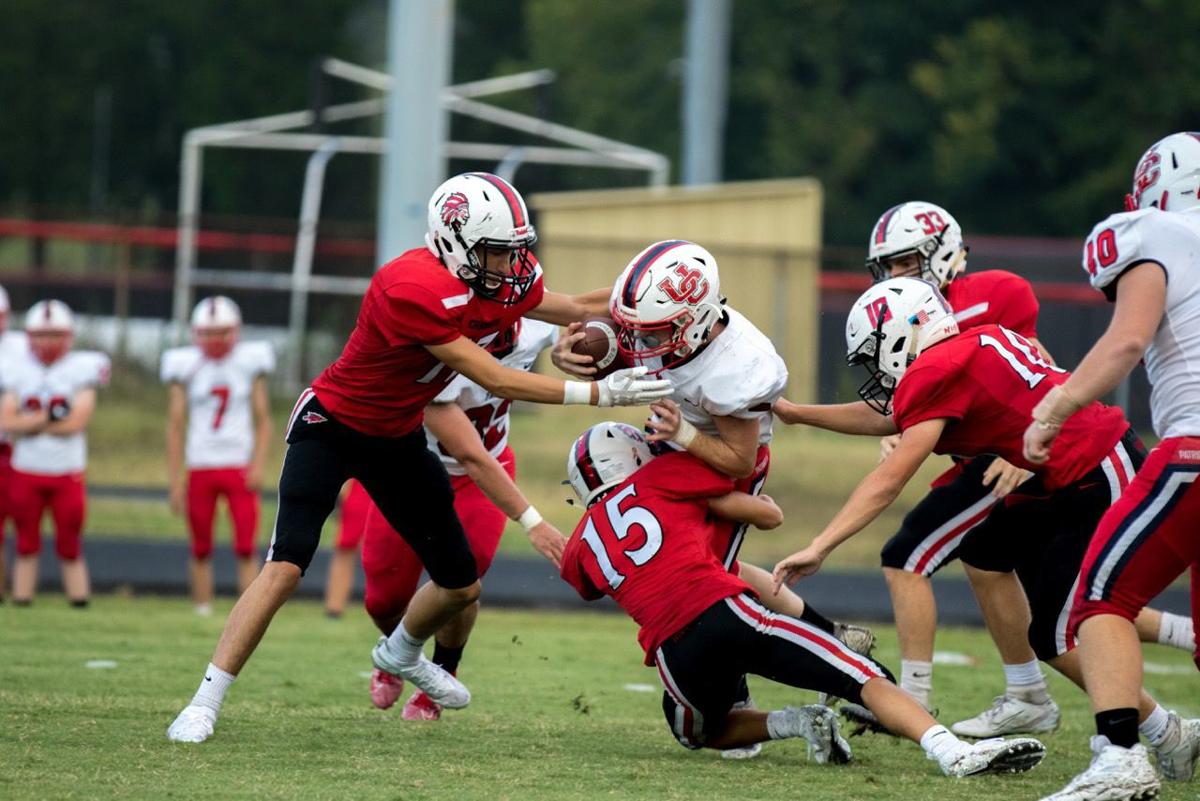 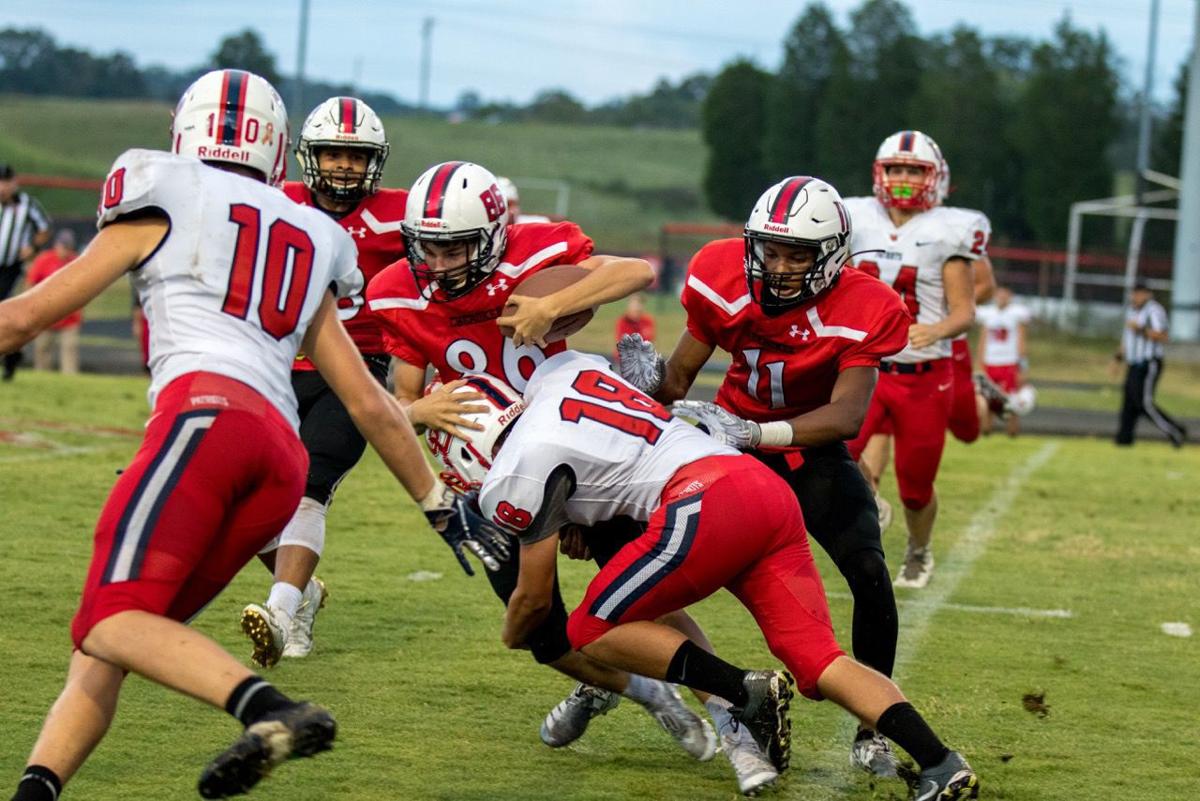 Cherokee freshman Preston McNally (86) is tackled by Union County’s Chase Odom (18) on a kickoff return in the second quarter Friday. 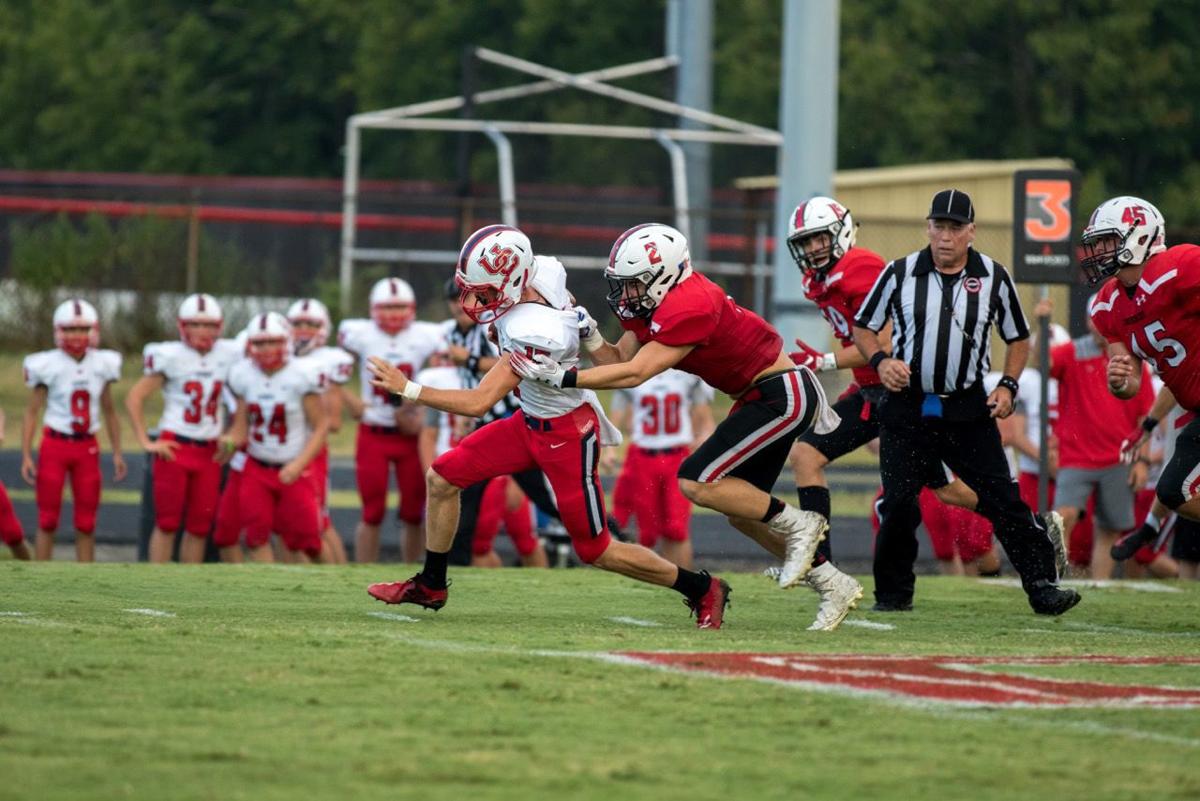 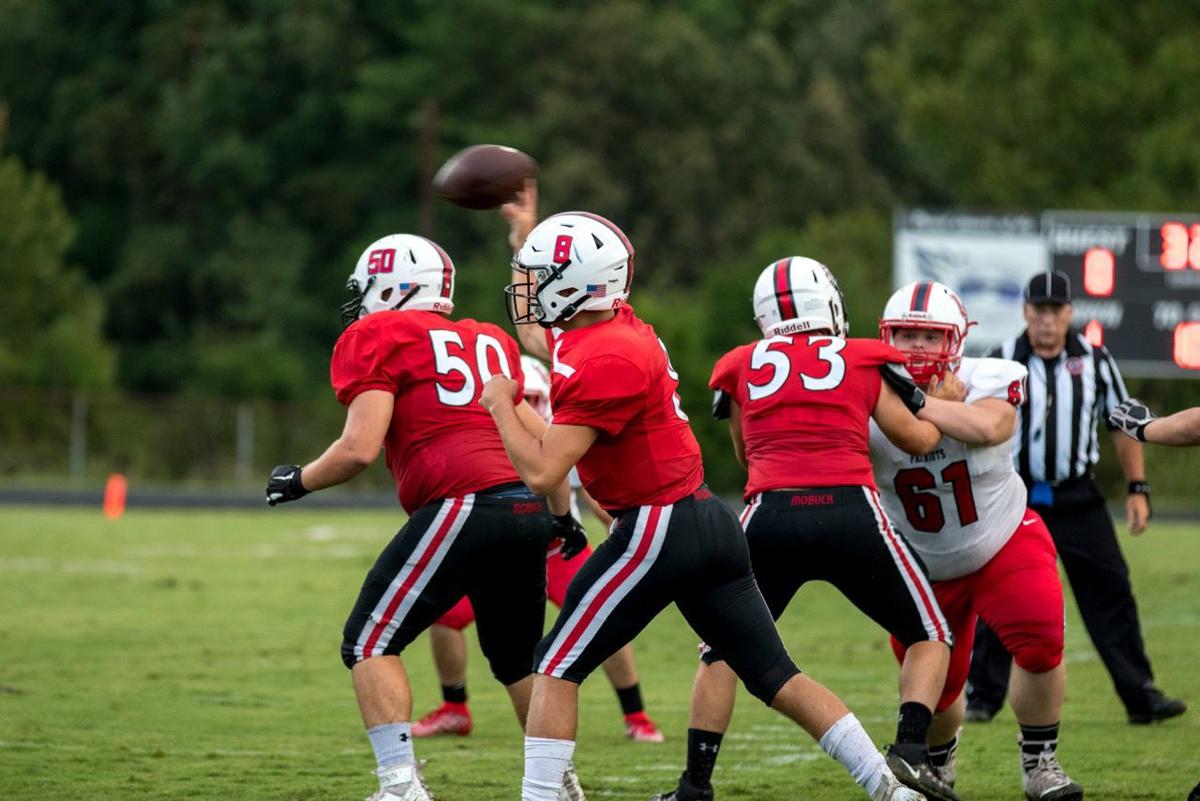 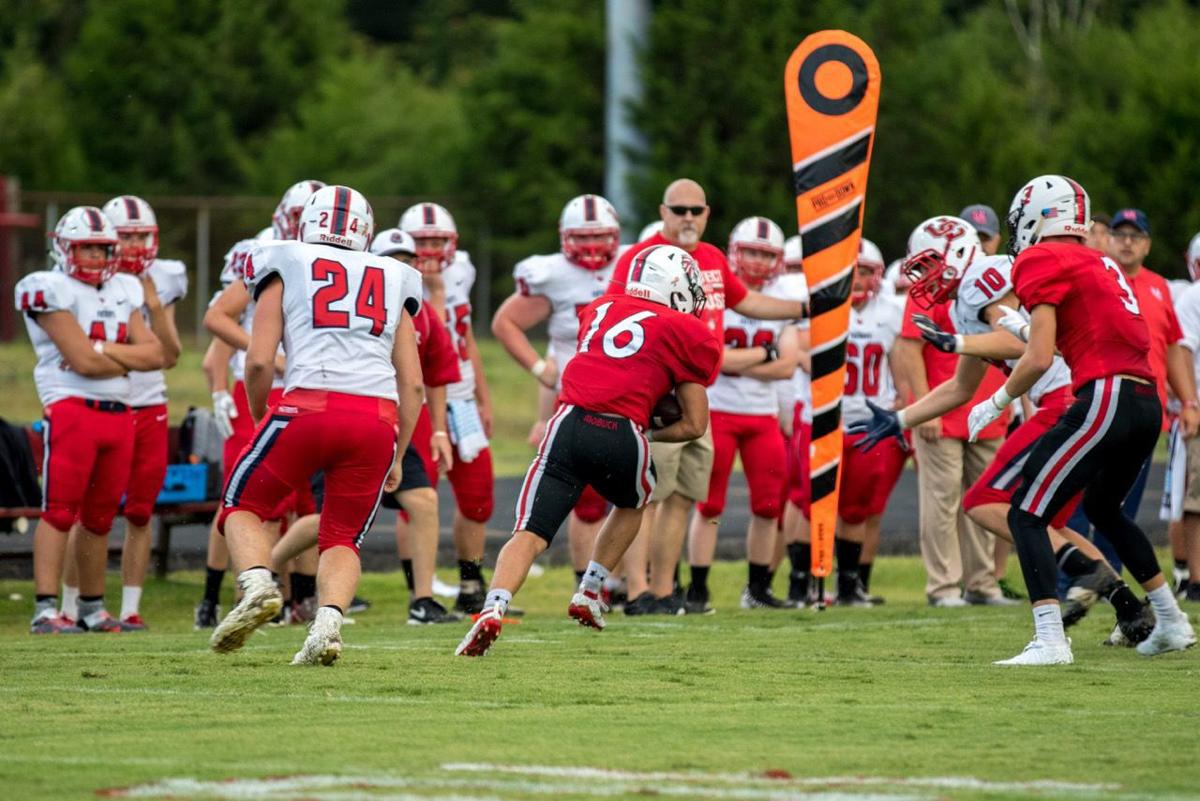 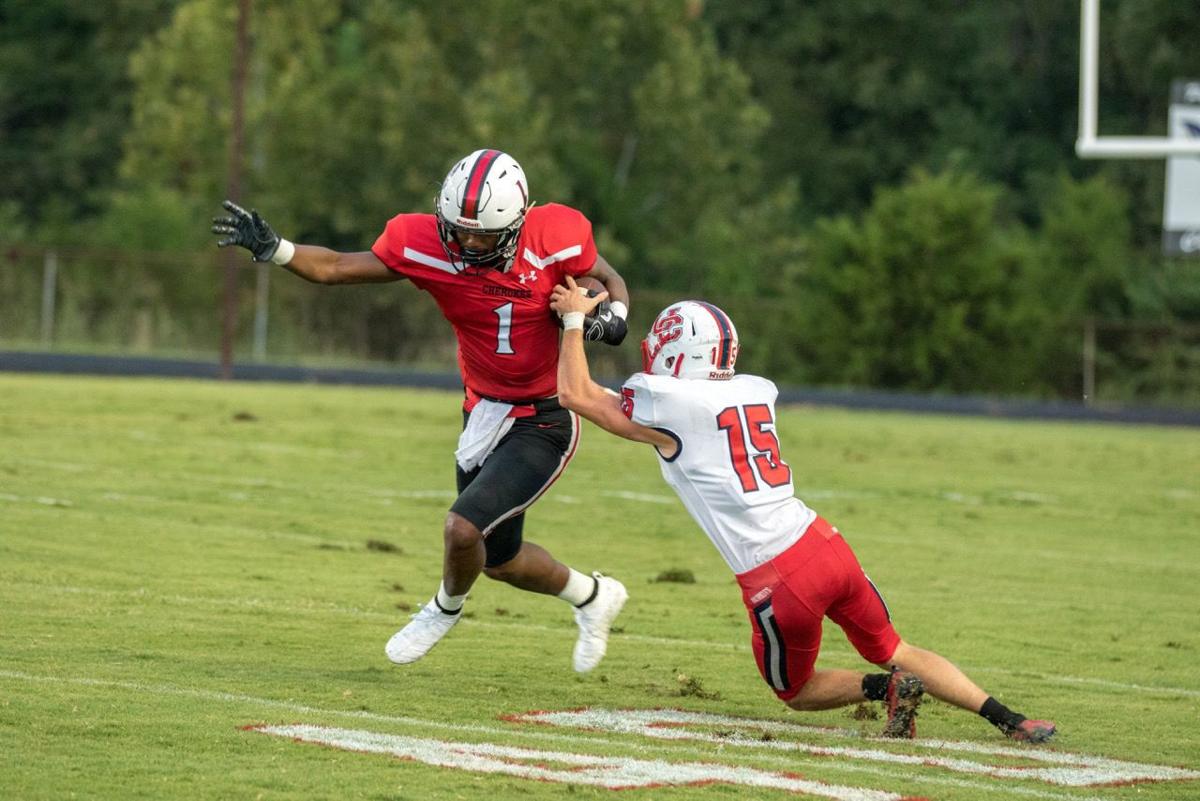 Cherokee receiver Austin Hamblen races down the sideline on a 56-yard pass play from Collin Trent.

Cherokee freshman Preston McNally (86) is tackled by Union County’s Chase Odom (18) on a kickoff return in the second quarter Friday.

ROGERSVILLE – The Cherokee Chiefs countered the thundering, ground-control running of Union County’s Alonzo Creech with explosive big plays through the air in a lightning-shortened, 14-6 win Friday in Big Red Valley.

The game was called after one half of play and 10 lightning delays with the Chiefs ahead, 14-6, in the season opener for both teams.

“It’s always good to get a win and to start out 1-0 is always your goal,” said Cherokee coach Cody Baugh. “It definitely happened in an odd way.

“With the lead at half, you feel good about going into it. I wish things would have went better in different scenarios, but we’re 1-0 and moving on to week two,” Baugh said.

The game saw the return of senior quarterback Collin Trent, who missed all of last season with a knee injury. Trent was strong in the limited time the Chiefs were on the field, completing seven of 10 passes for 125 yards and directing two scoring drives, scoring both Cherokee touchdowns.

“It’s definitely good to see Number 8 out there,” Baugh said of Trent’s return.

Trent completed a 56-yard pass to Austin Hamblen on the first play of the game, setting the Chiefs up with a first-and-goal at the Patriots four-yard-line. Two plays later, Trent scored on a two-yard run. New Cherokee kicker Peter Egbert added the extra point for a 7-0 Cherokee lead.

Egbert booted the ensuing kickoff to the Union County one, but Juston Dawson returned it to the 35, where the Patriots began an 11-play drive that burned more than 7:30 off the clock.

“Their offense is hard to deal with,” Baugh said. “They’re going to eat up a lot of clock and take up a lot of time and your offense won’t get many possessions. We knew that coming in.”

The drive was stopped at the Cherokee 18 when the Chiefs stopped a double-handoff trick play on fourth and four.

The Chiefs were unable to gain ground on their drive and punted back to Union County, which took over at midfield.

Creech, who had run seven times for 45 yards on the first drive, carried six times for 32 yards on the Patriots second-possession, including the final five-yard run which put Union on the board. Corbin Williams’ point after was no good and Cherokee held a 7-6 lead with 10:59 left in the first half.

Starting at their 38, the Chiefs mounted a seven-play, 62-yard scoring drive. Trent completed four of four passes on the drive for 28 yards, the last which set Cherokee up at the Union County 37, where the Chiefs showed proof that they do work together as a family.

On the first down, Trent handed off to his cousin, junior Trent Price, who went left with the ball, then handed off to his brother, freshman Will Price, who was running back to the right on what looked like a double-reverse, but he then floated a pass out to his cousin, Collin Trent, who caught it, bowled over a Patriots defensive back on his way to the end zone for Cherokee’s second touchdown.

“That play is called ‘Bruce,’” Baugh explained. “That’s their papaw’s name. Those three grandsons got to touch the ball on the same play. It’s something fun we did. We called Bruce and everybody knew it. They didn’t forget it. It was a lot of fun.”

Trent took care of the only obstacle on the play, the Patriots defensive back.

“Collin is a tough runner,” Baugh said. “It’s hard to tackle him in space. When you draw it up, you definitely don’t plan for that guy to be there. Will, being a young freshman, he just threw it anyway even though Will could have run and got a lot of yardage.

“It worked out in our favor. Collin made a great athletic play. It’s good to have him back,” Baugh said.

Egbert’s next kickoff was blasted into the endzone for a touchback. The Cherokee defense flexed its muscles on this Union possession, which ended with a punt after five plays and 14 yards.

“It seemed like when our backs were against the wall was when we finally decided to stop them,” Baugh said. “Our game plan, we kept tinkering with it trying to find the right thing because it seemed like they gassed us, and we’d stop them. Then they’d gas us again. It kept building and we kept adjusting, trying to make things happen.”

The Chiefs looked like they were going to score again when they got the ball back. Trent connected on second down with Jonas Leeper on a 35-yard pass play to the Union County 26. But a two-yard run, two incomplete passes and bad shotgun snap later, the Patriots had the ball at their own 40 with 1:59 left in the first half.

Creech, who finished with 110 yards on 16 carries, went back to work, rushing three times for 33 yards. But a bad shotgun snap of their own, put the Patriots in a fourth-and-19 from the Cherokee 45 with 25 seconds left.

Chiefs senior cornerback Micah Jones ended the Union County threat, picking off a Dalton Bradshaw pass at the Cherokee 30 and returning it 45 yards down the left sideline behind a host of Chiefs escorts, who forgot to watch the back door, allowing a Patriot to catch up and tackle Jones at the Union 15 as time ran out.

“You go in 14-6 and it could have been a little different there at the end of the first half with the interception return,” Baugh said. “Everybody was wanting to lead the guy to the end zone, but they forgot to look back and find somebody that’s coming. But that was a big play for us and it helped seal the deal.”

The teams lined up on the field to start the second half, but were whistled off the field at 8:55 p.m. when lightning was spotted in the area, necessitating an automatic, 30-minute delay.

After the last announced delay, Union County coach Josh Kerr reportedly agreed to call the game final rather than prolong the second half start and return trip to Maynardville. The team had reportedly endured a long, roundabout trip on the way over to Rogersville earlier in the day.

While everyone wanted more football on opening night, Cherokee was happy with the weather-shortened victory.

“That’s part of it,” Baugh said. “You hate it for seniors, because you lose a half that they’ll never get back. But it’s something that you’ve got to be thankful for a win and get excited about it. I think we made it out healthy and with a lot of positives to build on.”

The Chiefs travel to Sullivan South Friday. The last time they were there, Sept. 16, 2016, the freshman Trent-led Chiefs won a wild one, 55-44, their third straight win with more than 50 points.

“Death Valley is always a fun place to play,” Baugh said. “It’s tough place to play. A lot of people have trouble going in there and getting a win. We won the last time we went there. It’s something we’ve got to be prepared for.”

Daniel Boone won there Friday, 30-6, as the Rebels lost three fumbles and an interception. The Rebels still managed 152 yards rushing on 28 carries, led by Julian Reed’s 95 yards on 14 rushes.

“Their offense is one that’s going to run the ball heavy,” Baugh said. “Not the same style as (Union County), but a lot similarities there and we’ve got to be prepared for it. We’ve got to sharpen things up on offense and hopefully the weather will cooperate.”