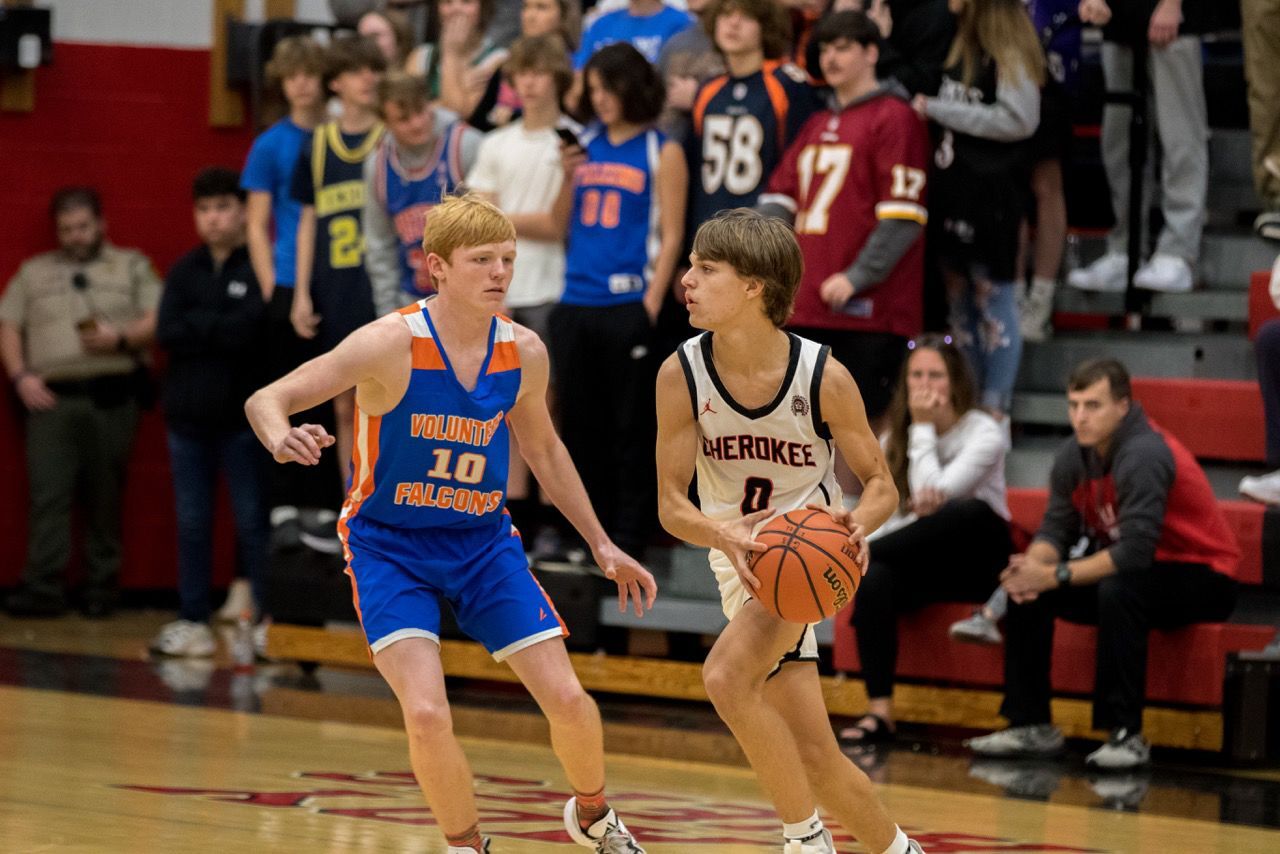 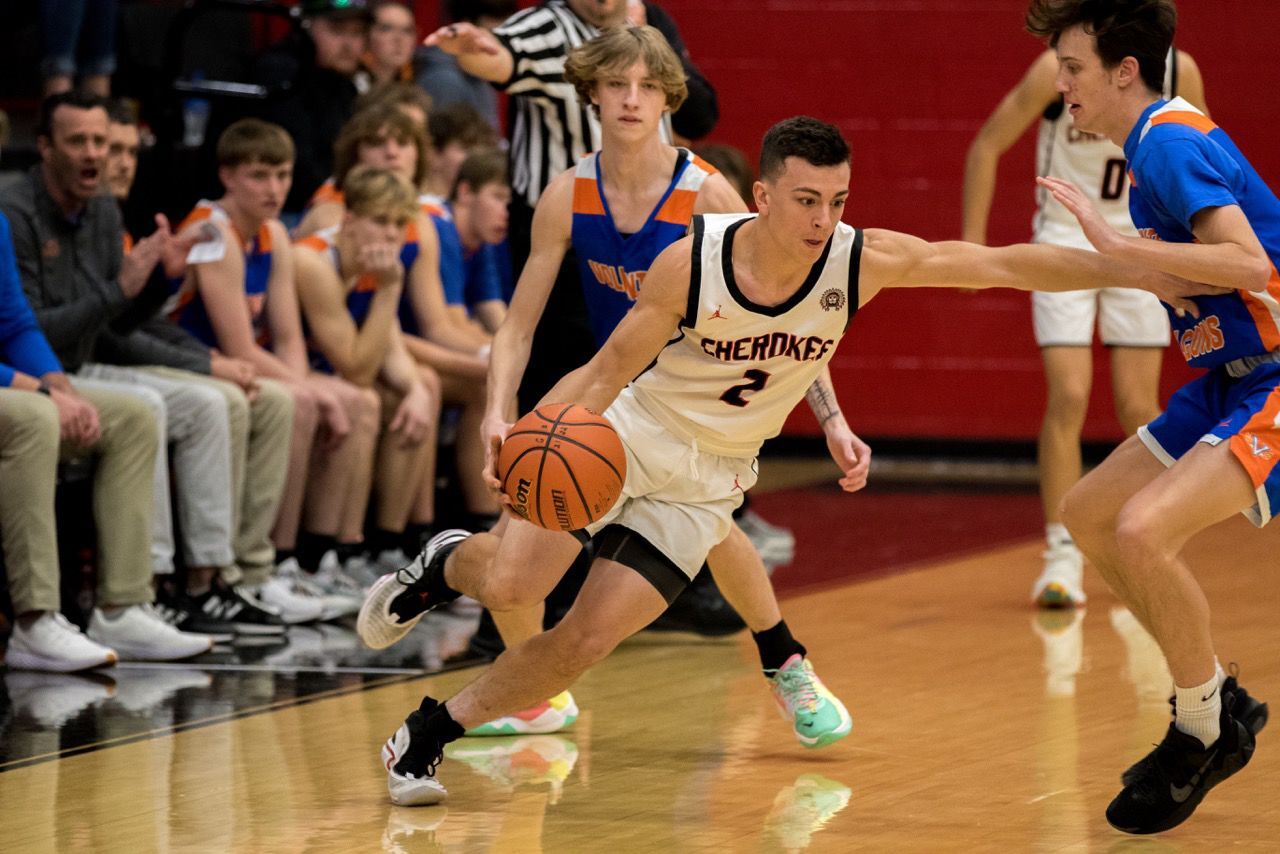 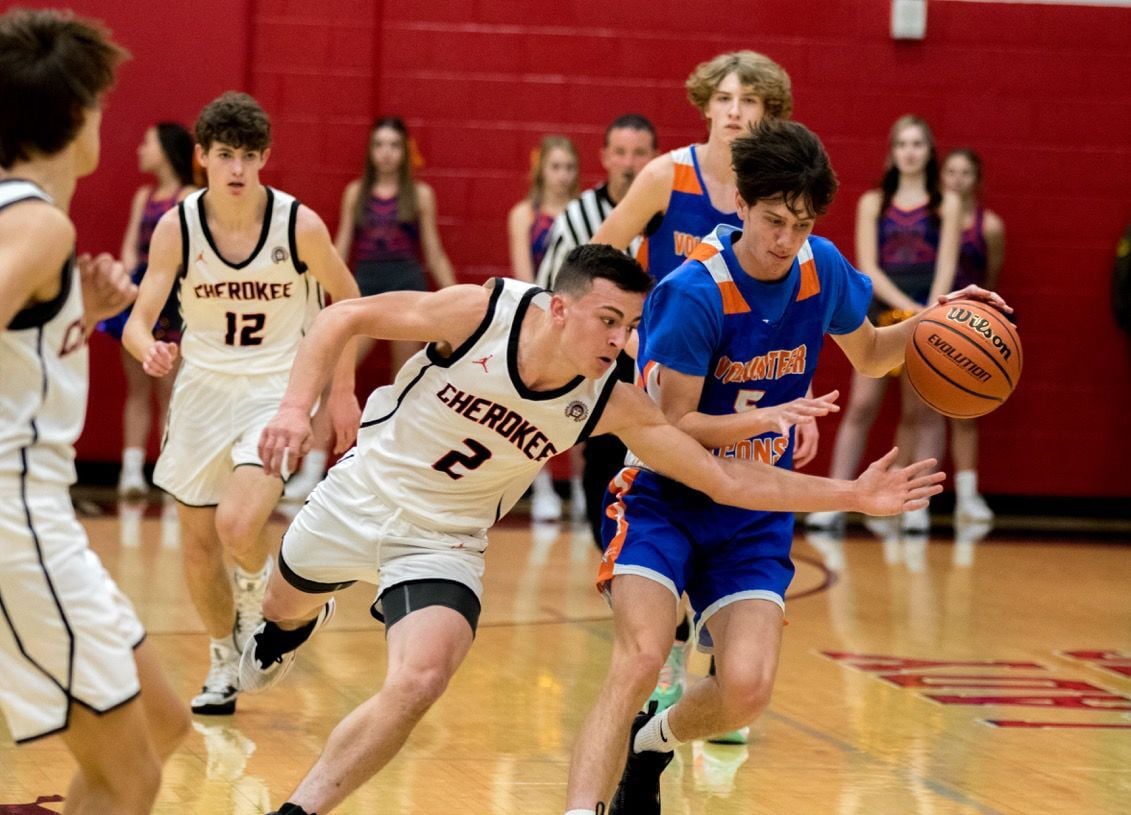 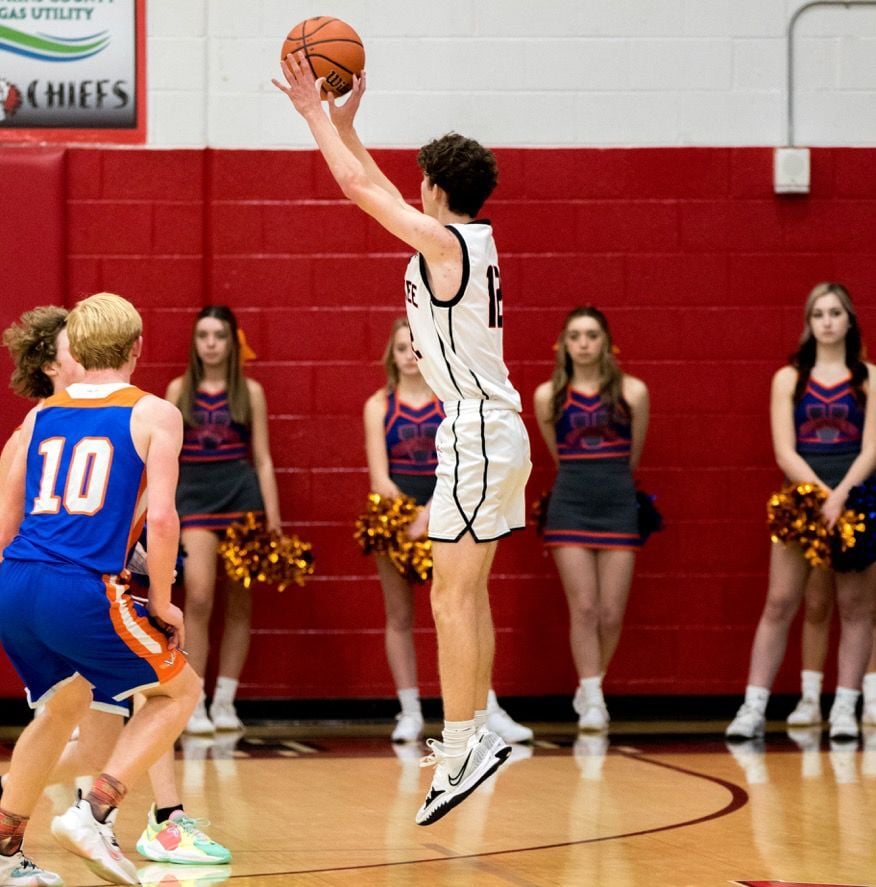 Cherokee’s Colin Ryan (12) goes up for a three. 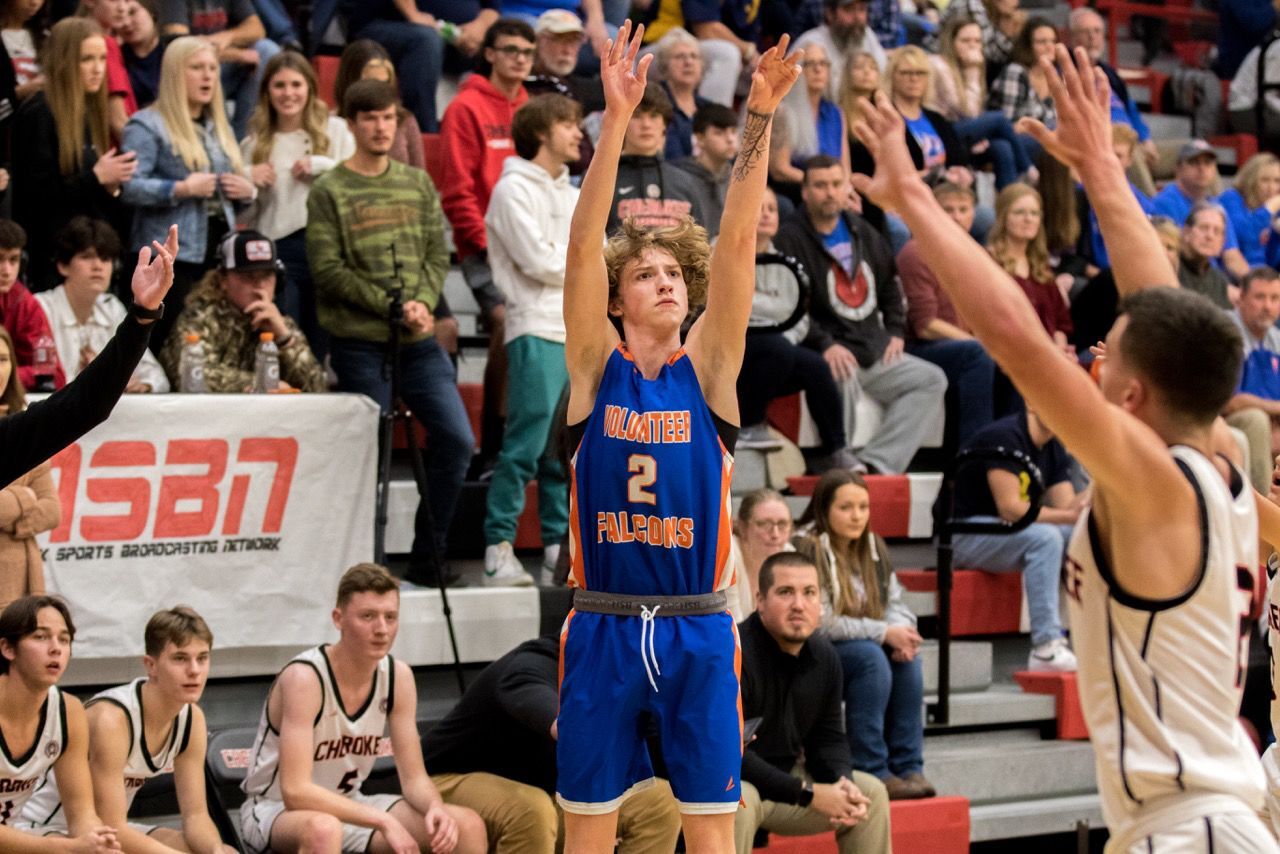 Volunteer’s Bradin Minton (2) launches a shot from the outside Friday against Cherokee. 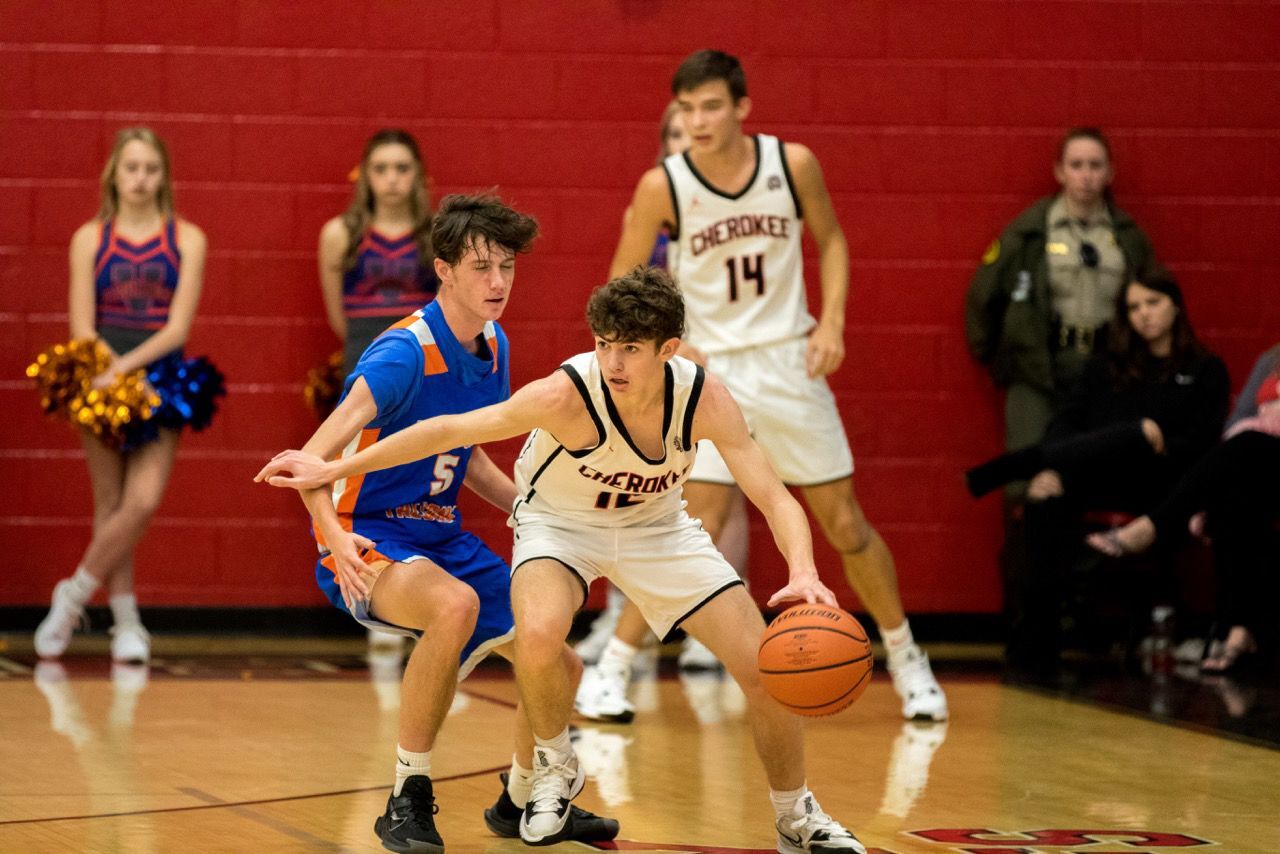 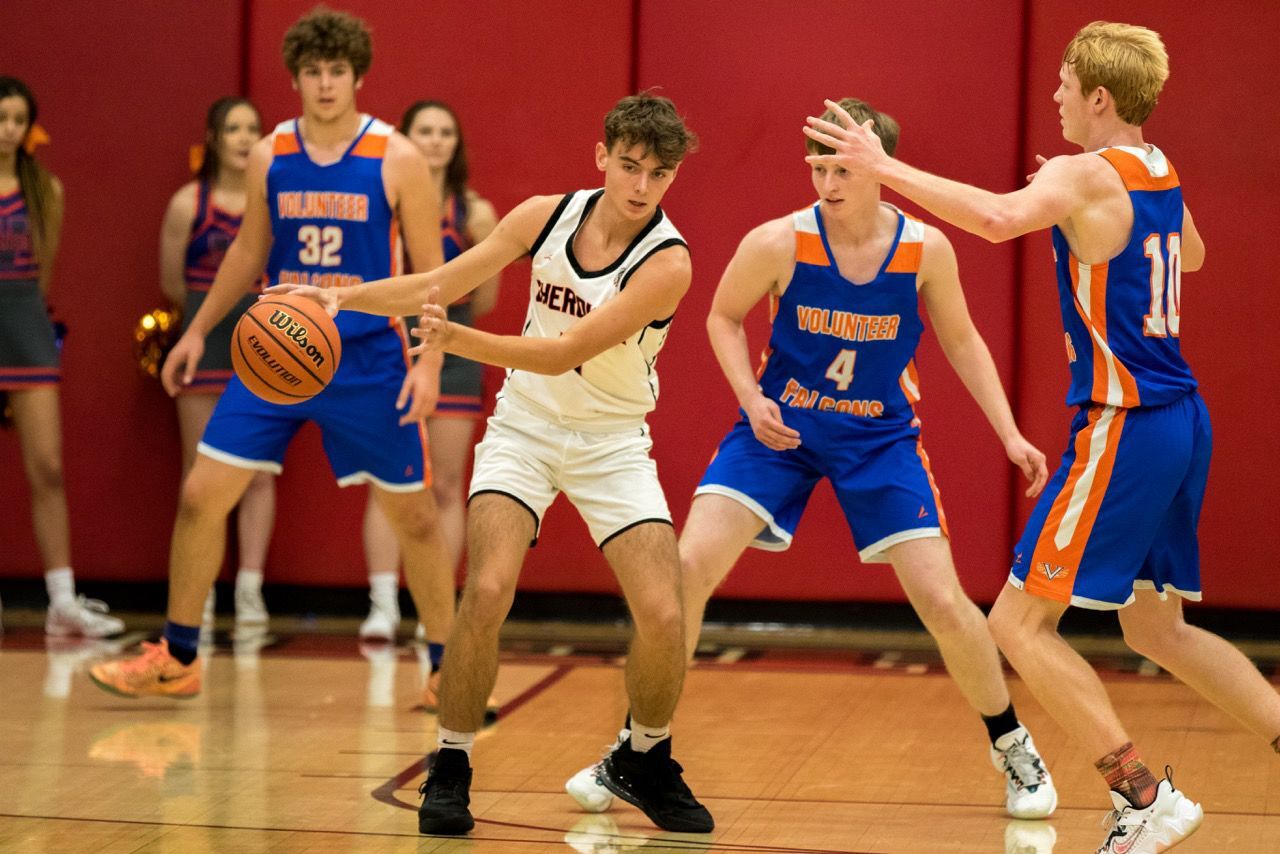 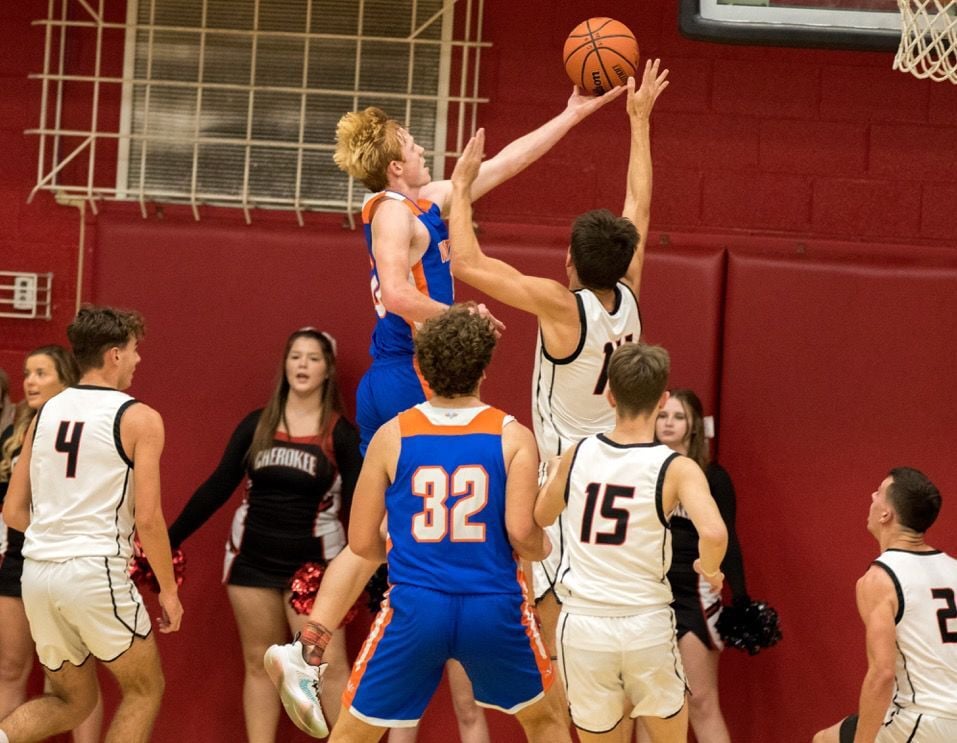 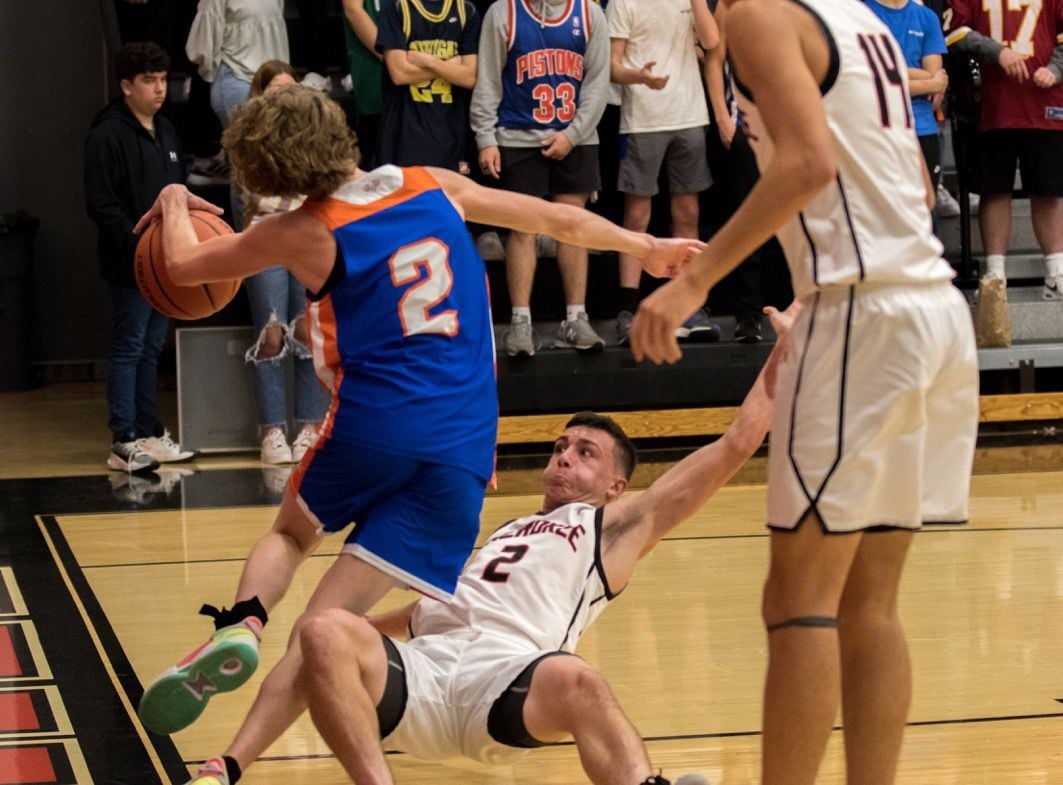 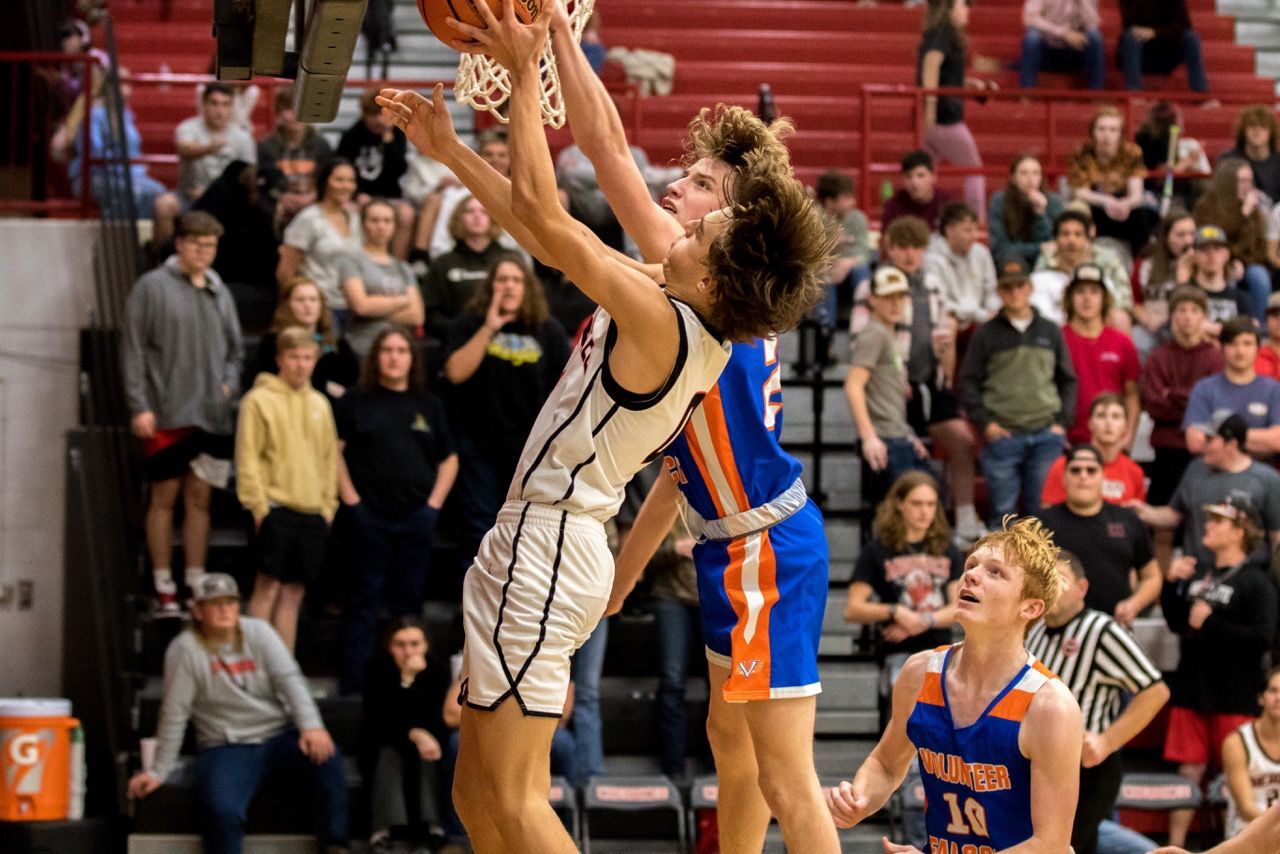 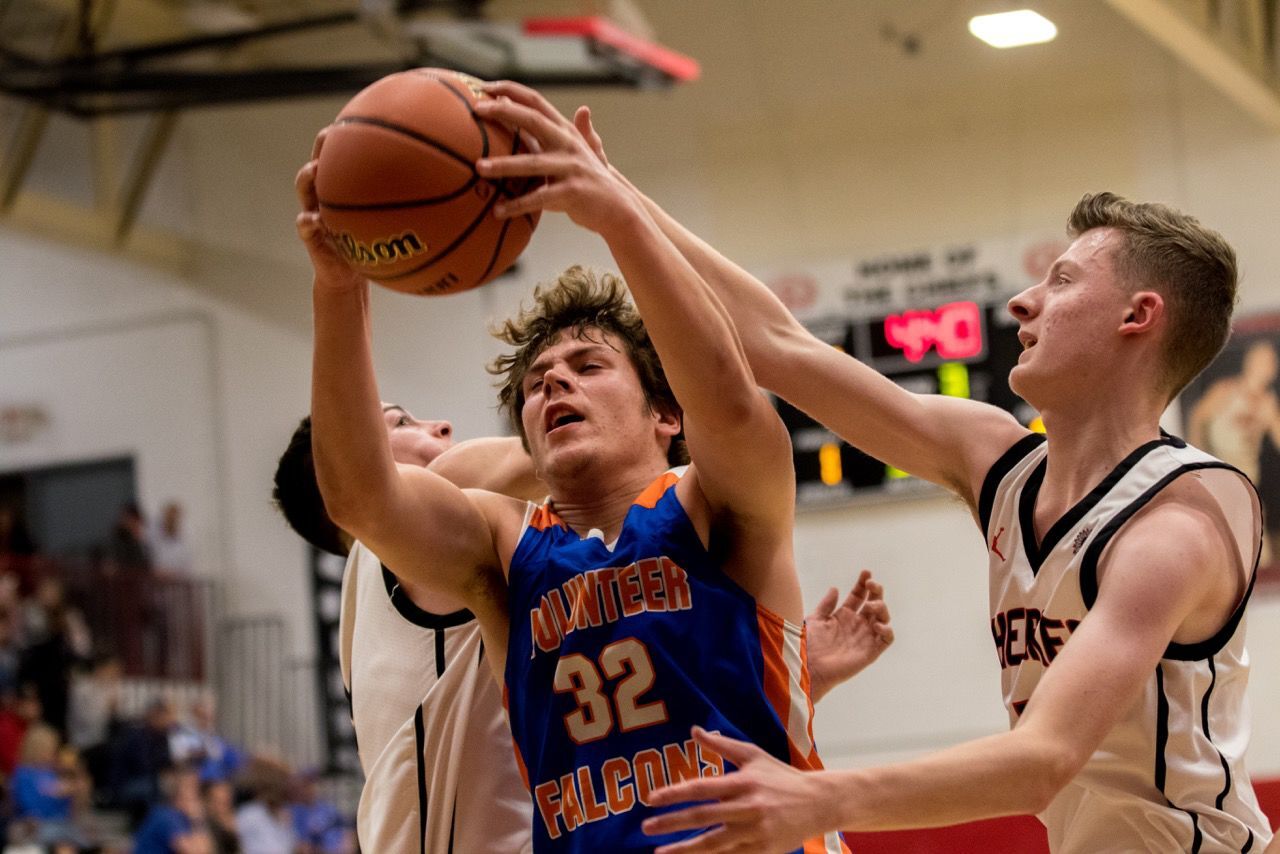 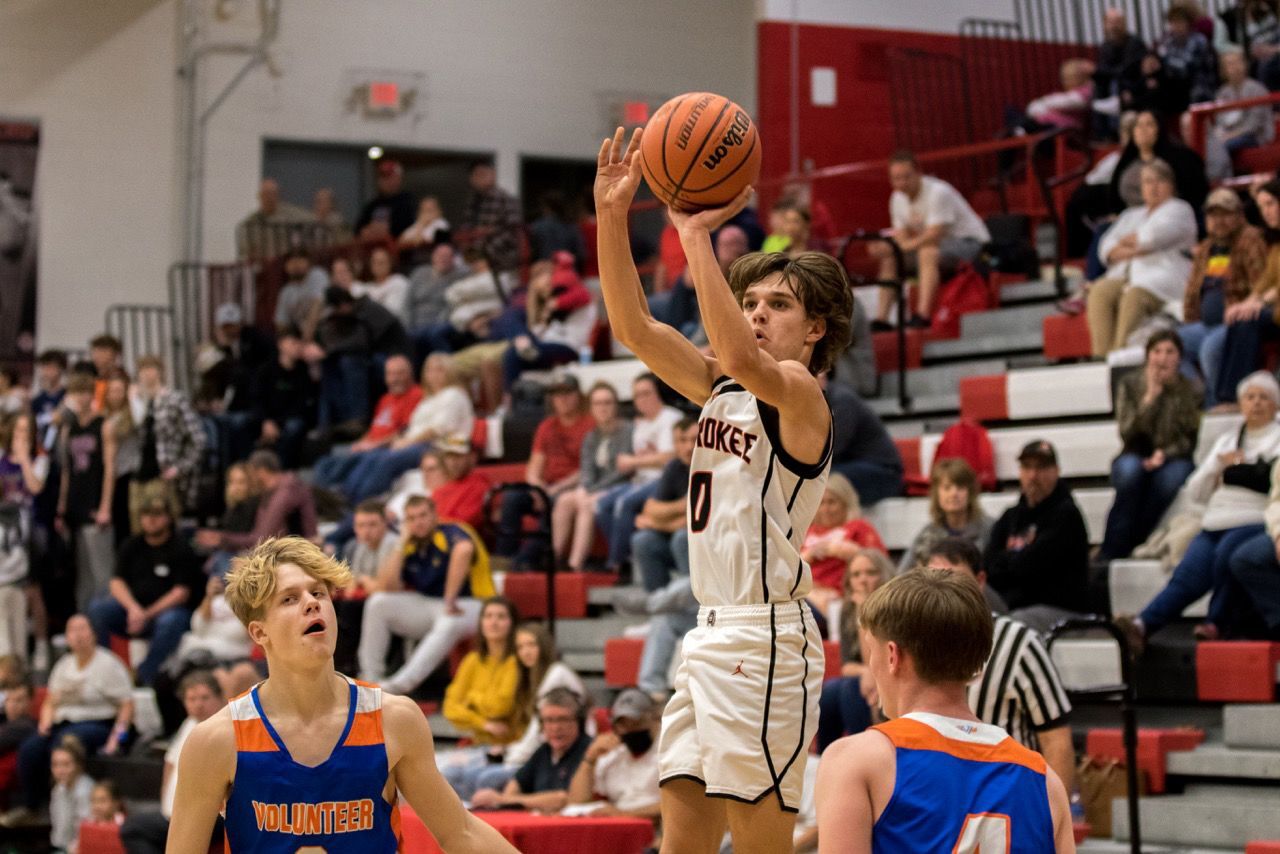 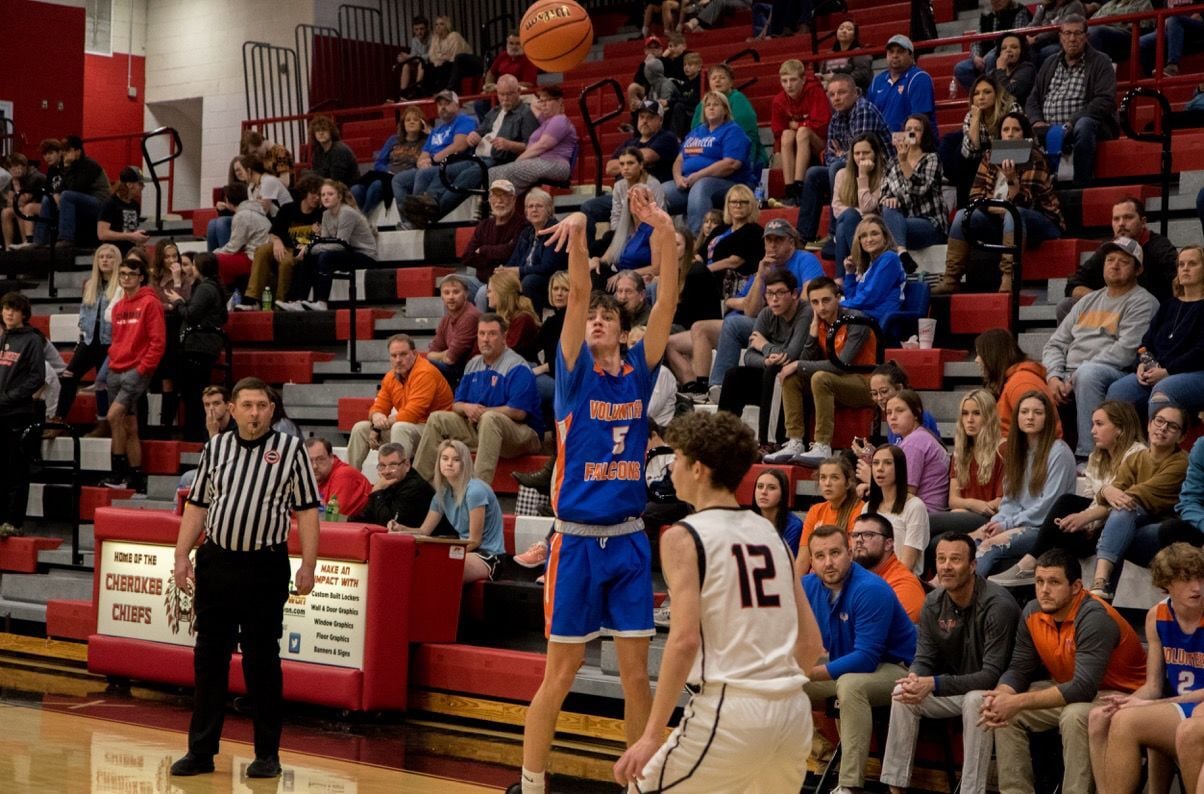 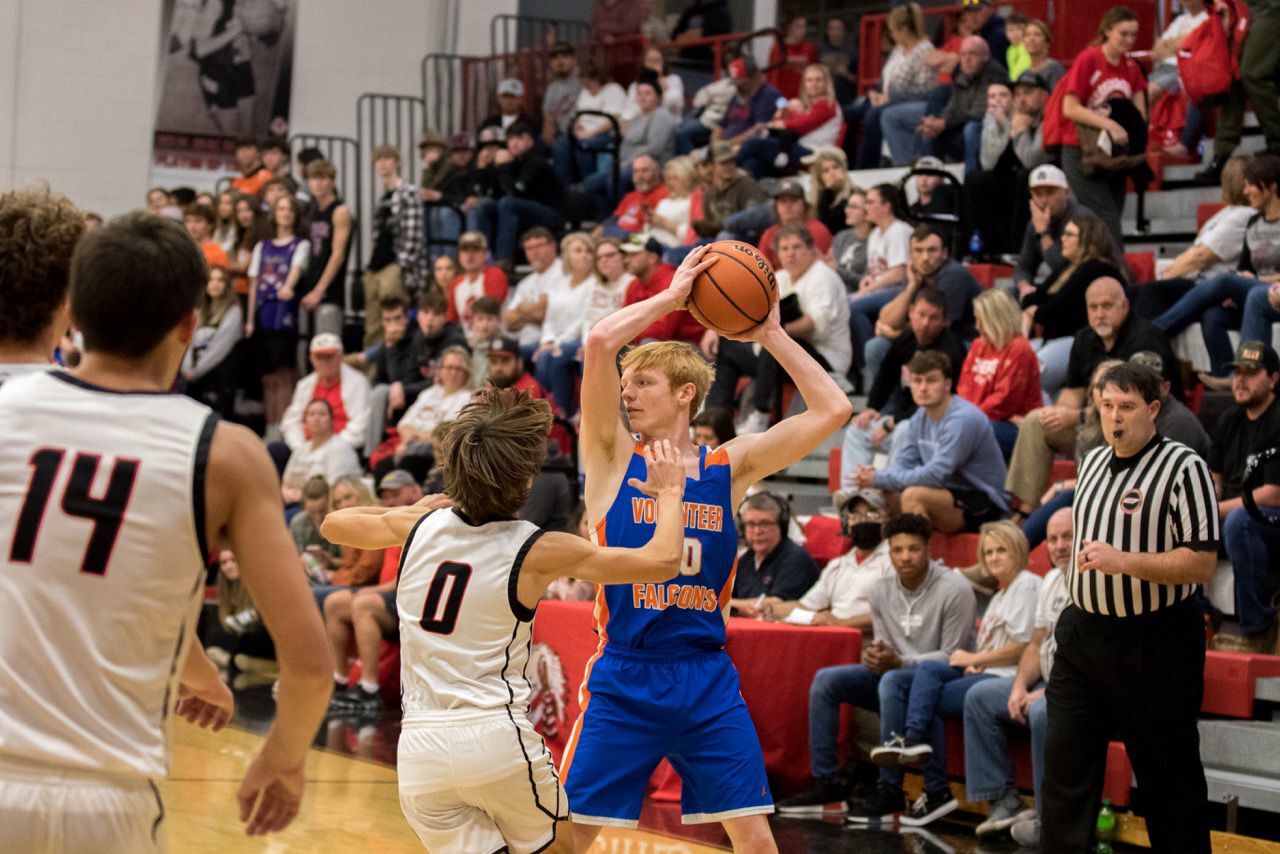 Cherokee’s Colin Ryan (12) goes up for a three.

Volunteer’s Bradin Minton (2) launches a shot from the outside Friday against Cherokee.

ROGERSVILLE – Volunteer went on a 36-2 run during the middle two periods as the visiting Falcons turned a close game into a 68-40 rout over Cherokee Friday night.

“It’s always a tough game to play, for either team,” said Volunteer coach Mike Poe. “It’s always the emotion of the county rivalry and all that kind of thing. I thought Cherokee played extremely well early in the game, which we had to expect was going to happen.

“They were going to come out and give great effort. They made a lot of great plays early in the game. But we hung in there and took their shot and then we kind of settled in and got some things happening for us in the second quarter and beyond,” Poe said.

The first quarter was typical, back-and-forth, Cherokee-Volunteer basketball. A Bradin Minton drive for Volunteer was answered by a Colin Ryan layup for Cherokee. A three and a layup by Falcons newcomer Joltin Harrison prompted a layup by Joey Henley for the Chiefs.

A layup by the Falcons’ Andrew Knittel was answered with a Ryan three and Henley jumper for a 9-9 tie. Knittel’s three with :16 left in the first gave Volunteer a 15-11 lead, but a jumper by Conner Mowell off an inbound pass cut the lead to 15-13 as the first quarter ended, and Mowell tied the game with a put-back with the first basket of the second period.

Then Cherokee went cold, scoreless the rest of the half, as the Falcons closed the half on an 18-0 run for a 33-15 advantage at the break.

“It’s 15-13 after one, then we just lose our mind,” Cherokee coach Trey Fields said. “We start turning it over, miss shots – good shots. We were getting what we wanted. We knew they were going to make shots. They’re a good basketball team. We’ve just got to do a better job of staying in the moment and making the right decision.”

A pull-up jumper by Colton McLain with 6:55 to go in the third quarter finally stopped the run, trimming the Falcons’ lead to 36-17. But while the Chiefs were struggling to score, the Falcons were giving up easy basket attempts for easier ones by making the extra pass, and a 15-0 run by Volunteer gave the Falcons a 51-17 lead with 2:27 to go in the period.

“Our kids came out and competed very hard,” Fields said. “They competed the whole game. It’s just like I told them, we go down miss a shot, they go down, make a layup. We go back down and miss another shot.”

Harrison scored 19 to lead Volunteer, which got 13 from Knittel, 11 from Jon Wes Lovelace and seven from Minton. McLain led Cherokee with 14, all in the second half, 10 in the fourth. Ryan added eight and Henley seven.

The Falcons improved to 7-2 on the season.

“I’m excited to get the win and get out of here,” Poe said. “Nobody got injured and we’ll move on to the next one. We’re a little banged up right now with Cason (Christian) out. He’ll probably be out until the first of the year. When we get him back, because he was playing extremely well before we lost him, we’ll get our depth back.”

Christian rolled his ankle against Oak Ridge during the Food City Thanksgiving Classic at Sullivan East Nov. 23 and was on a scooter Friday at Cherokee. Sophomore Connor Haynes came off the bench and scored eight in the fourth for Volunteer.

“I was glad we were able to get some younger guys on the floor because you never know,” Poe said. “If somebody goes down, we want somebody to be ready to step in and play. We’ve got a lot of young guys who can play as well, so we’re still going to be okay.”

Meanwhile, Cherokee falls to 0-6 on the season. Fields is pumping the breaks on the new up-tempo approach.

“The first couple of weeks, we were turning the basketball over too much,” Fields said. “So, we’re going to have to change up our style. We’re still going to try to play quick at certain times, but more of a controlling tempo and playing to what our strengths are.”

The Chiefs will address those adjustments as they enter their new district. Cherokee was slated to travel to Cocke County Tuesday night and host Claiborne County Friday, both Class 3A Region 1 District 2 foes.

“I’m excited about the new conference,” Fields said. “It’s going to be huge for the kids, and I think all the way across, the way it’s the most aligned it’s been and probably the best it’s been, in my personal opinion. We feel like we can compete. So, we’re excited about that.”