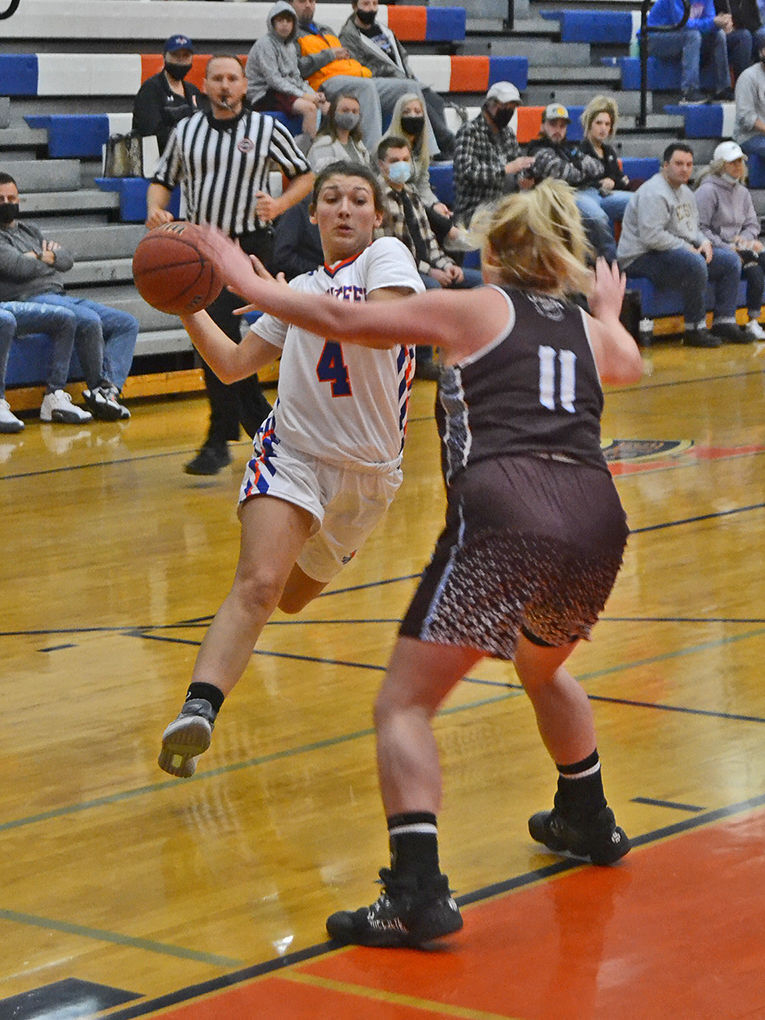 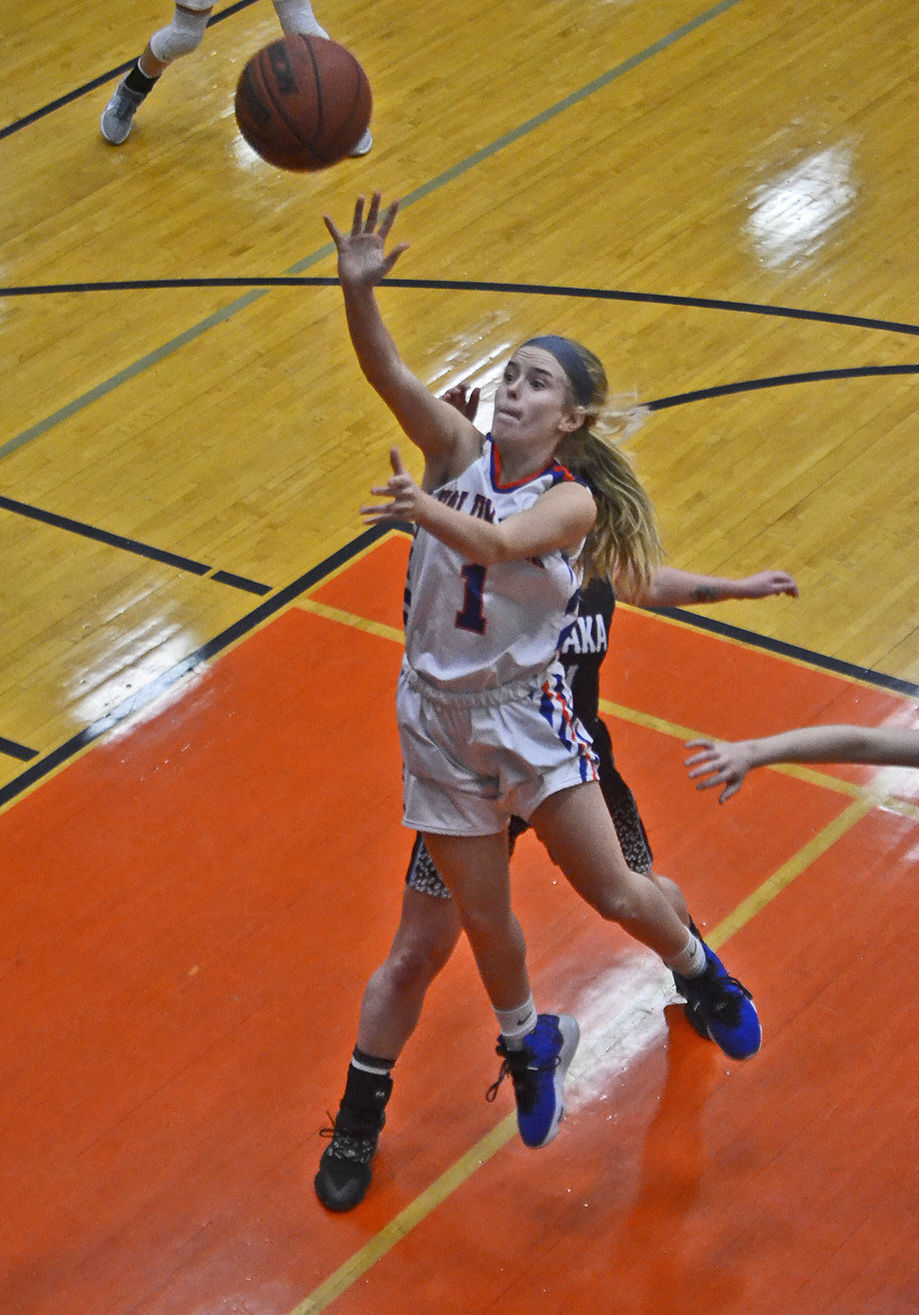 Volunteer’s Kendra Huff (1) drives for a basket against Unaka Saturday. 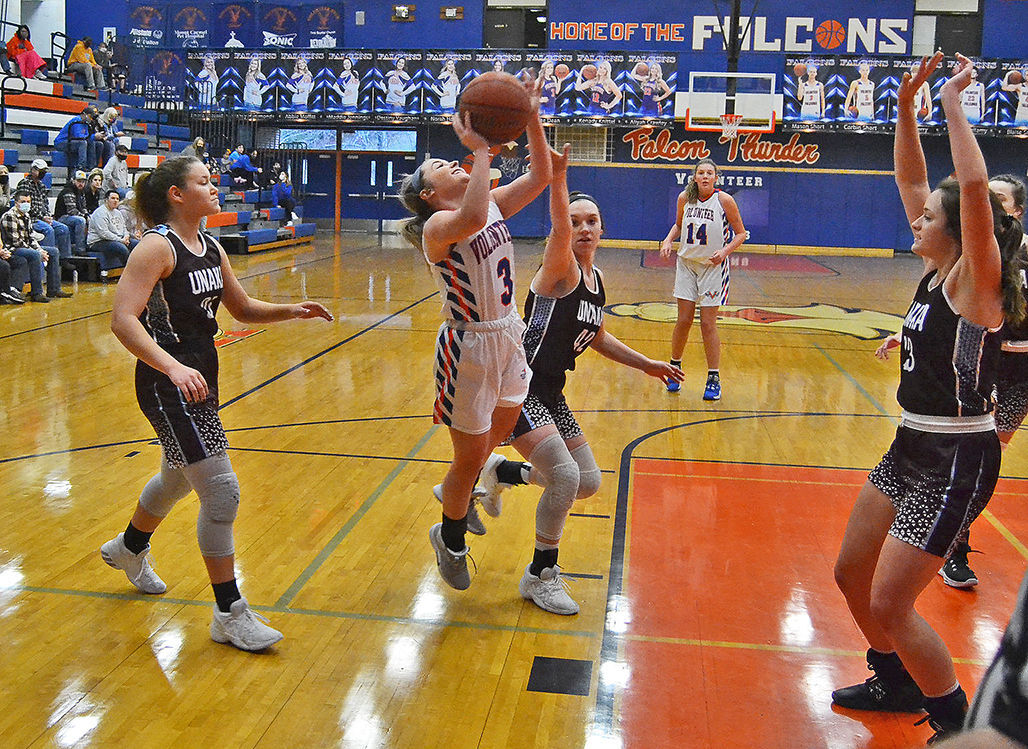 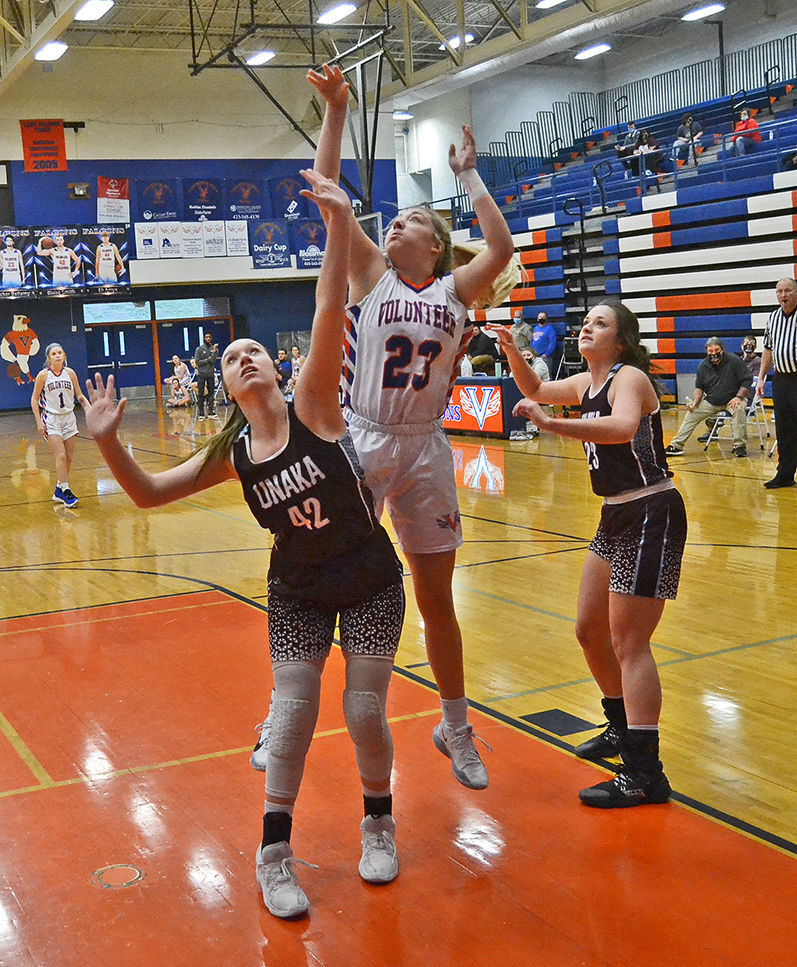 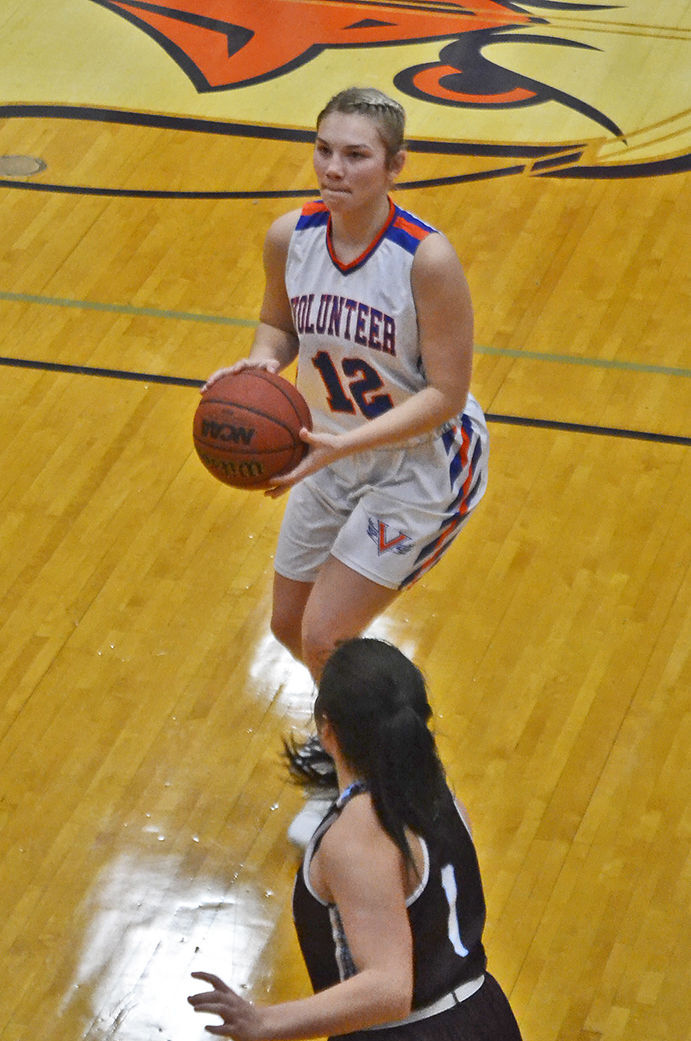 Volunteer’s Kenady Knittel (12) squares up for a three attempt against Unaka Saturday. 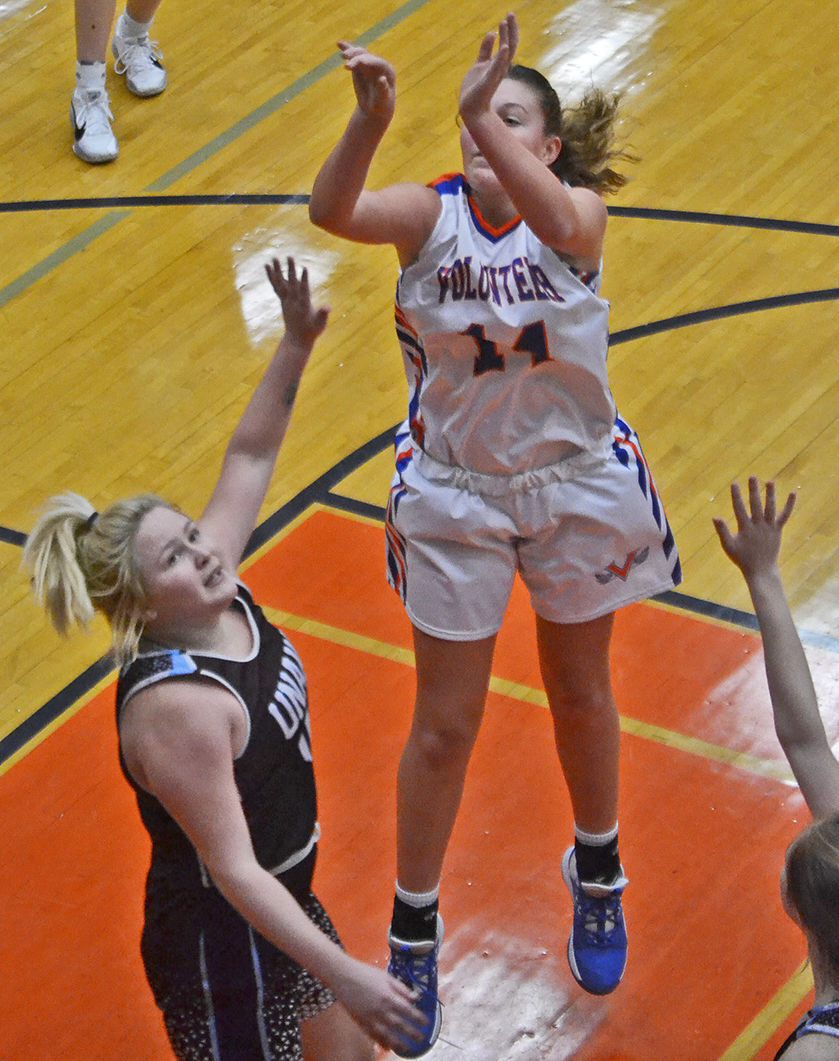 Volunteer’s Veda Barton (14) scores in the paint against Unaka Saturday. 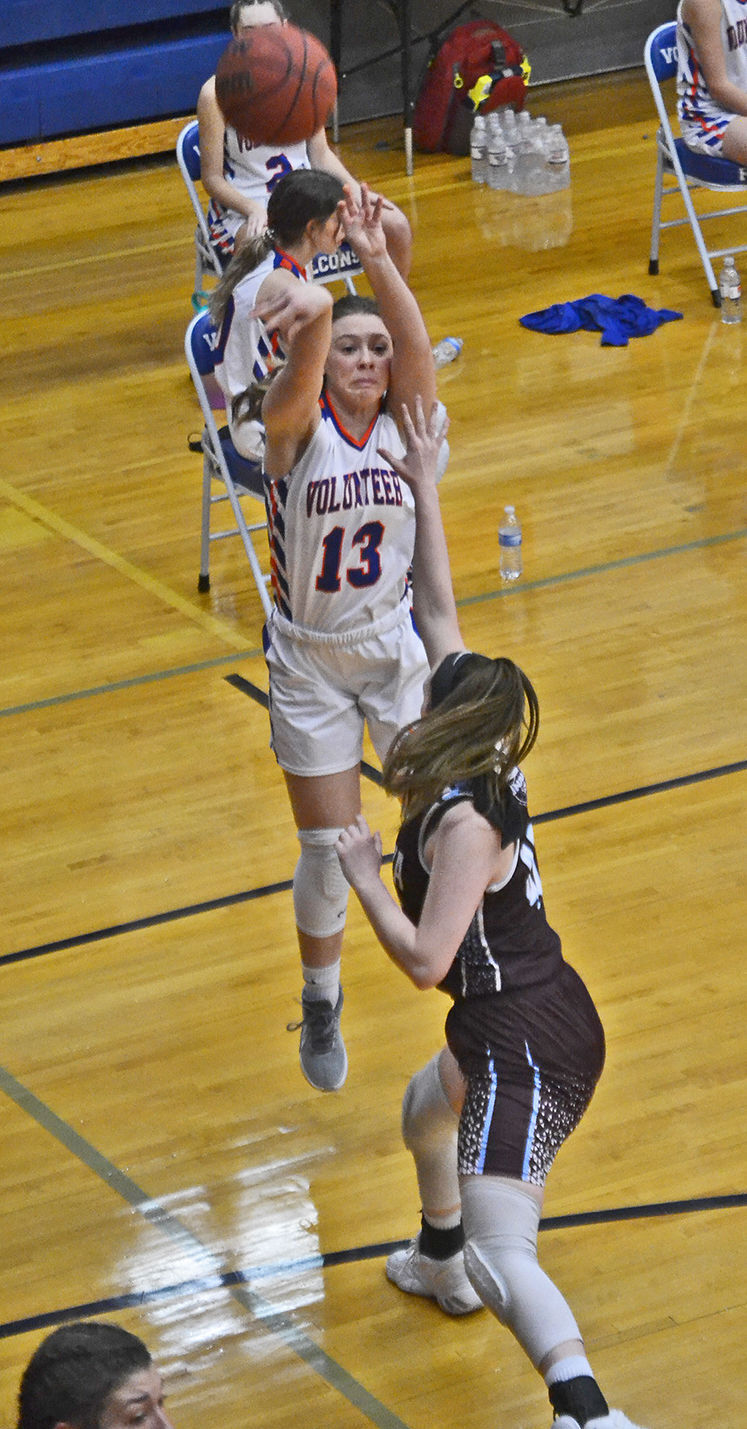 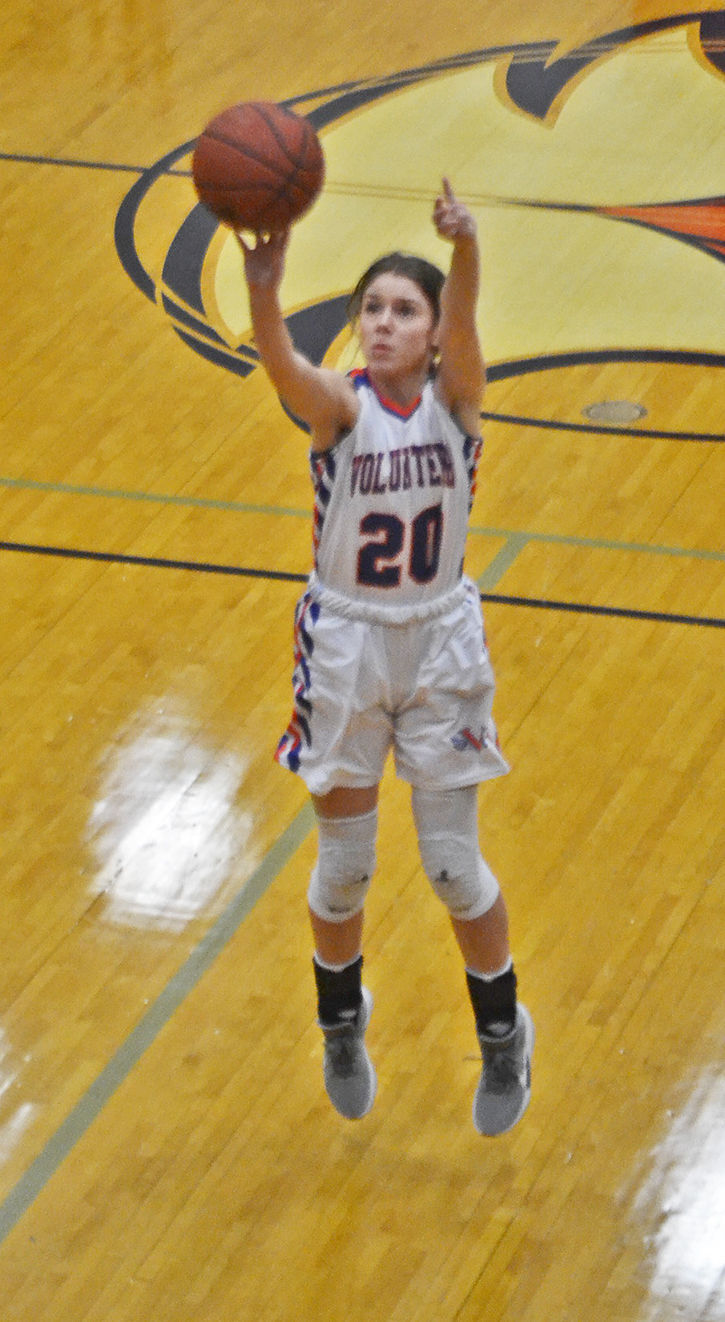 Volunteer’s Kendra Huff (1) drives for a basket against Unaka Saturday.

Volunteer’s Kenady Knittel (12) squares up for a three attempt against Unaka Saturday.

Volunteer’s Veda Barton (14) scores in the paint against Unaka Saturday.

CHURCH HILL – Volunteer overcame a sluggish start – and Lyndie Ramsey – to escape with a 58-52 win over Unaka Saturday evening at the Falcons Nest.

Lady Falcons coach Tyrone Smith was so unhappy with the start, he kept the team for more than 30 minutes afterward for a stern pep talk.

“I just told them you can’t walk in the gym and think you’re going to win every game,” Smith said afterward. “You’ve got to go out there and play hard and compete. They came to play.

“That No. 10 (Ramsey) is a player. She played hard. We brought it together and we won the game, but at the end of the day, you’ve got to come play hard every day. That’s just what happens,” Smith said.

The Lady Falcons started each quarter slowly, including the first when they dropped behind 13-6. Fortunately for the Lady Falcons, they finished each period better than they started them.

Aliyah Crawley’s three-pointer with :27 remaining in the opening quarter closed the gap to 13-9 heading into the second.

After Ramsey scored the first two baskets of the second half to tie it up, Volunteer increased the defensive intensity, led by ball-hawking defender Audrey Evans, to outscore the Lady Rangers, 15-9, the rest of the quarter.

“We picked the defense up in the second half better,” Smith said. “We should have come out that way in the beginning. We were flat defensively at the start.”

In the quarter, Veda Barton scored seven points, six in the paint, and Emily Wyatt added five, including a three-pointer.

“Veda Barton posted up real hard down low and got some buckets,” Smith said. “I’m trying to get my girls to look inside more. We’ve got some tall trees down there that can score.”

After Macy Ensor’s two free throws cut the Volunteer lead to 41-35 to start the fourth, Ramsey put on a one-player show to rally the Lady Rangers.

Over the next two possessions, Ramsey put Unaka back in front with a pull-up jumper, only to see the lead go back to Volunteer, 51-50, on a three by Crawley. Ramsey responded with two free throws to put Unaka back in the lead, 52-51, with 1:47 to play.

But Crawley hit another three one minute later for a 54-52 Volunteer lead, and Evans hit both free throws on an intentional foul with :07 left to seal the victory, and Dean hit two more with :02 on the clock for the final margin, as the Lady Falcons escaped with the non-conference win.

“I’m glad we played like that today. I’d rather get all the rust out today and be ready to go next week, because we’ve got a long week next week,” Smith said. The Lady Falcons were scheduled to play Tennessee High Monday, Science Hill Tuesday, Sullivan Central Thursday and Cherokee Friday.

Ramsey led all scorers with 32, including 17 in the fourth quarter. Crawley led Volunteer with 14, including three of the Lady Falcons’ eight three-pointers. Dean scored 12, including 10 of 12 from the foul line. Evans and Barton had eight apiece.

“Having Aliyah back was good. She came back full force after being out. Everybody else played well and competed. I’m very happy about that. Now we’re back full force. We’re just going to get it rolling,” Smith said.

“It’s all going to come together at the end of the day. It’s crazy. It’s still early. It feels like we still haven’t really played. With this COVID thing going on, we lose a girl, we get a girl back, we lose a girl. So, it can kind of throw off the chemistry a little bit. But we stayed strong and got the win,” he said.