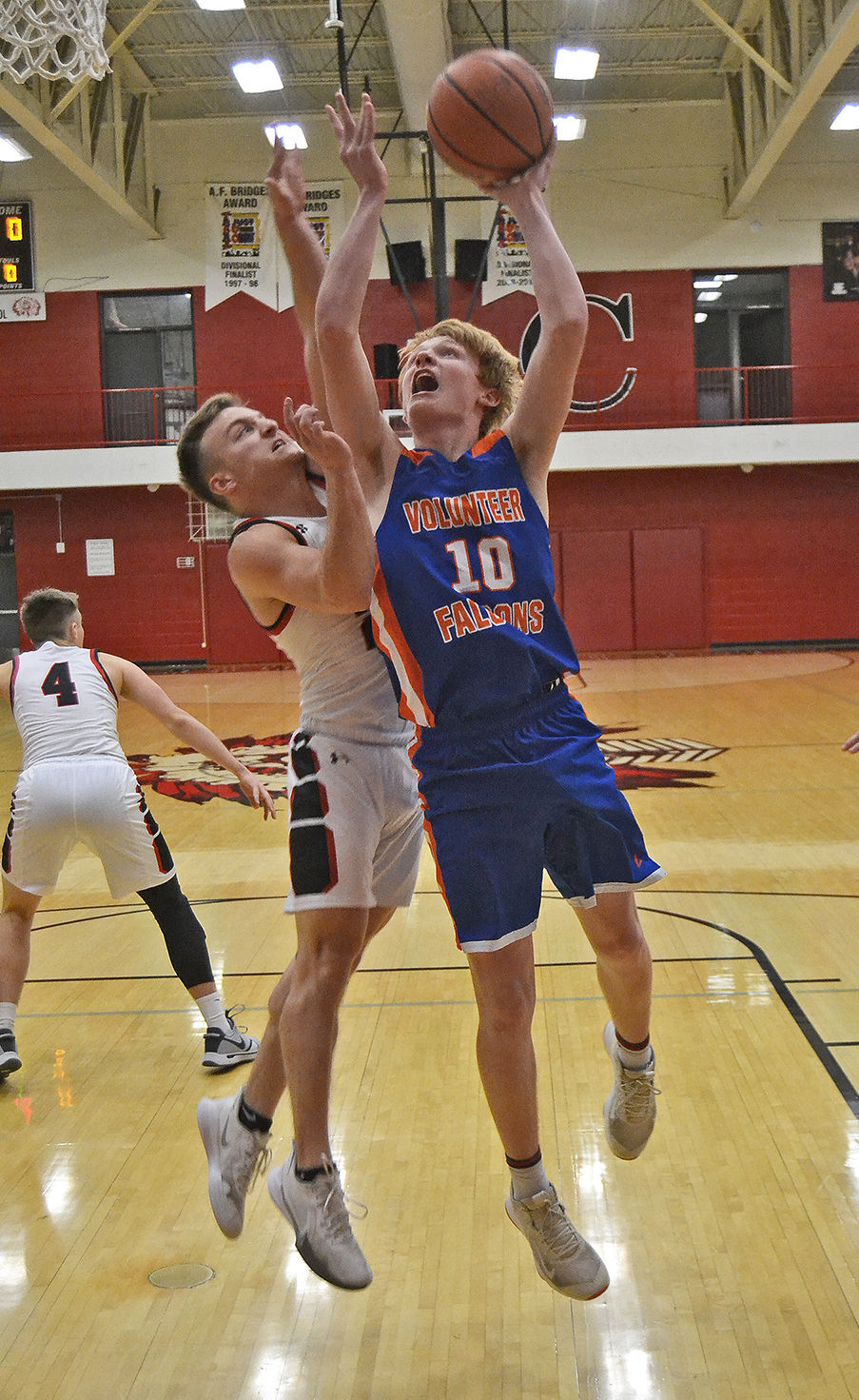 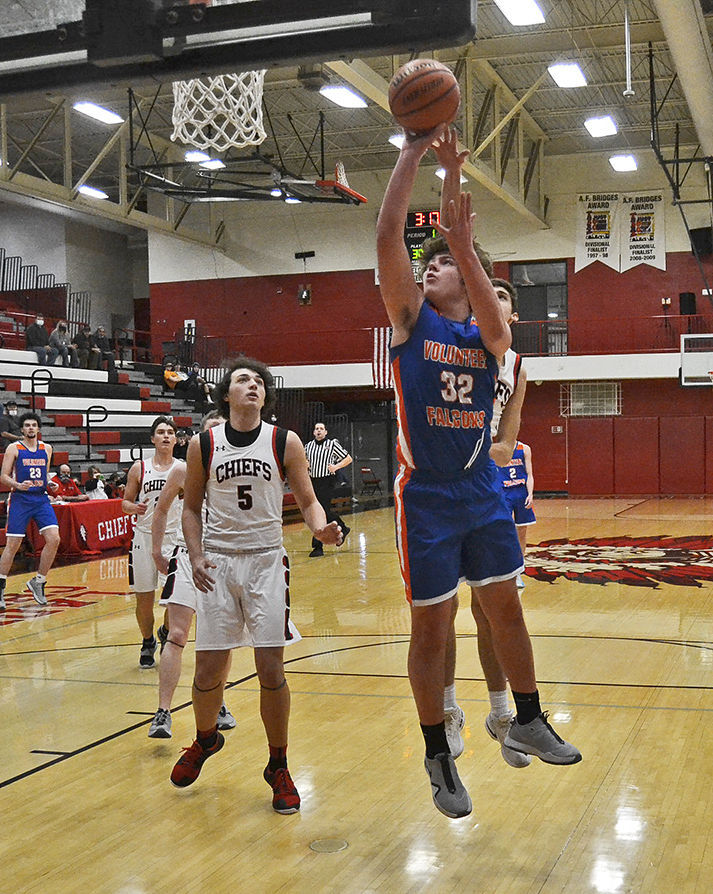 Volunteer’s Garrison Barrett (32) scores in the post in the first quarter. 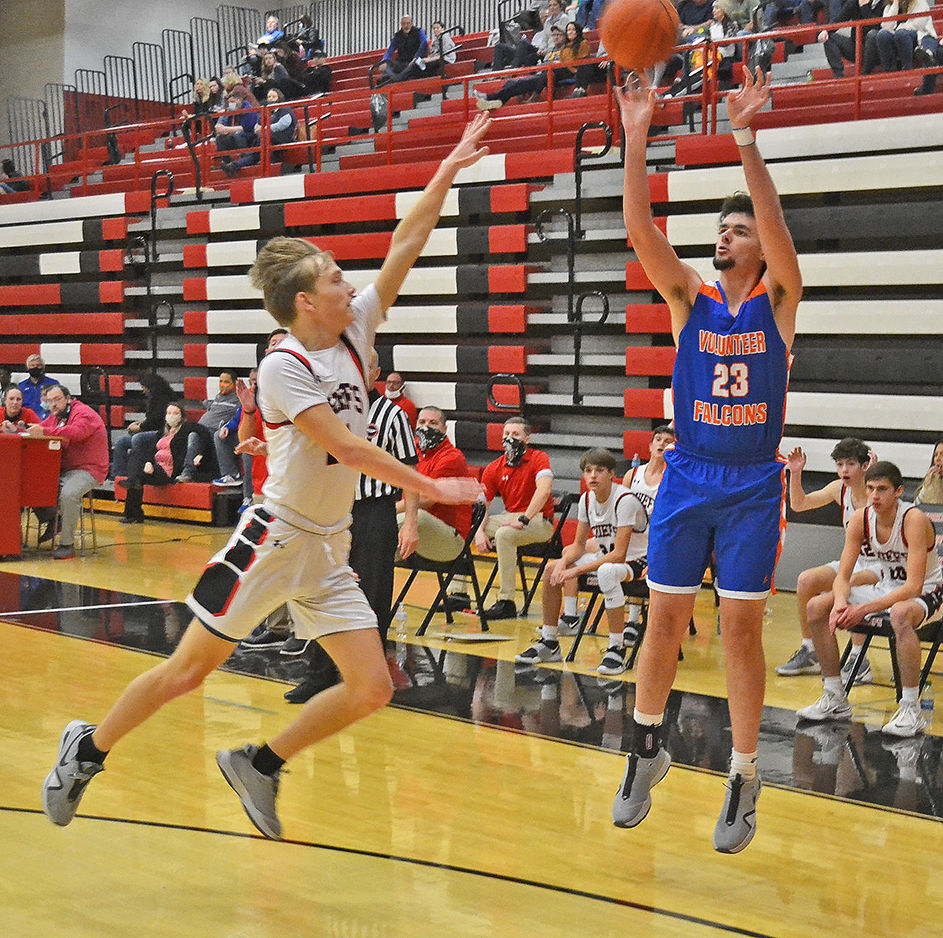 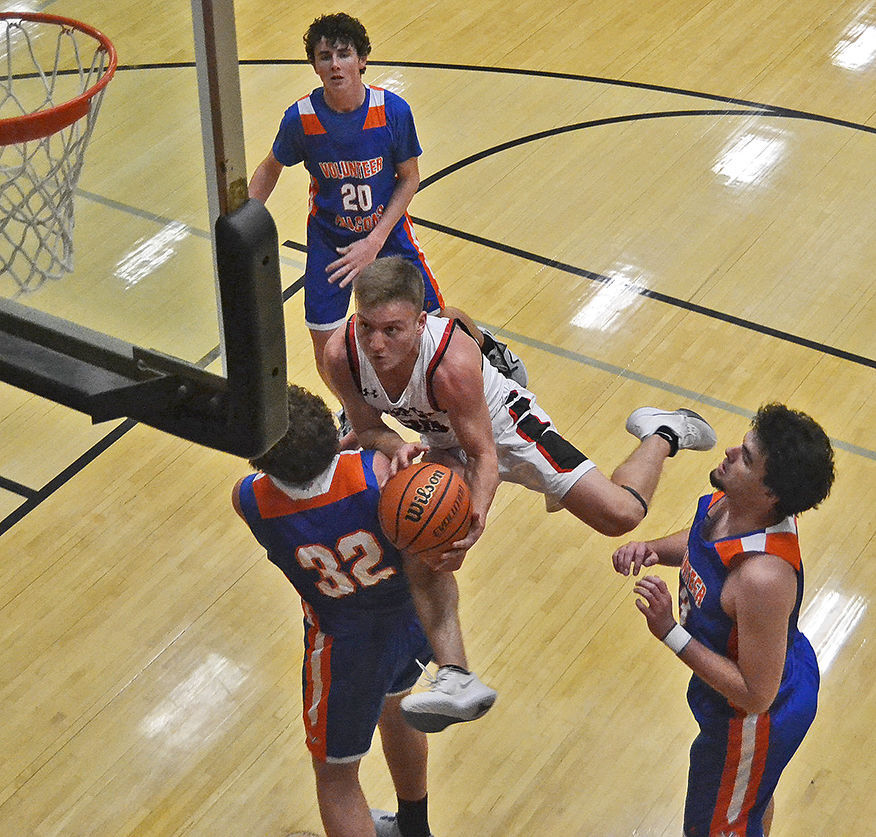 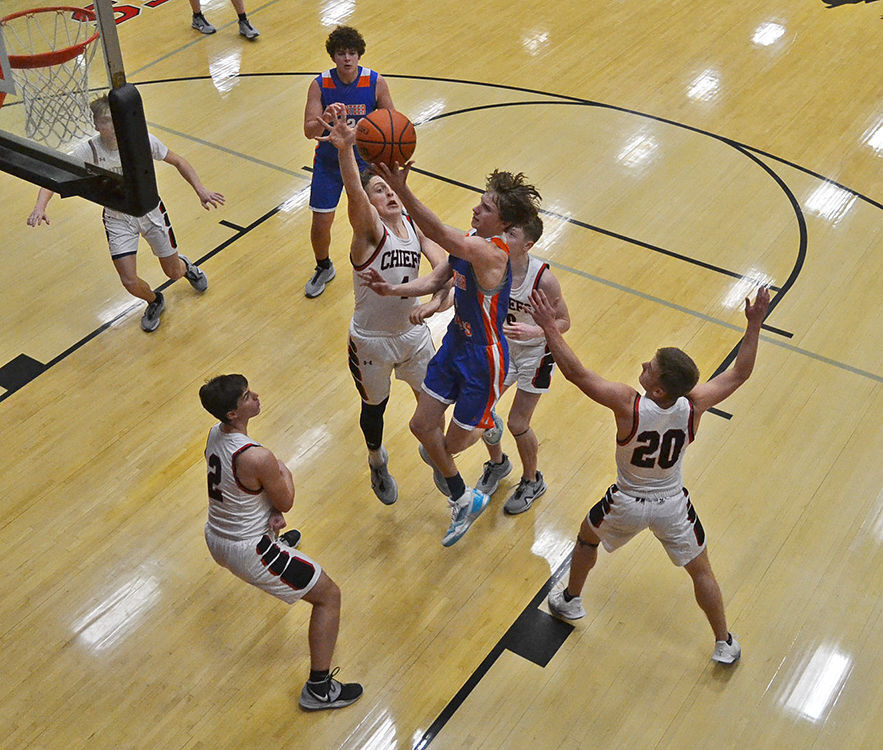 Volunteer’s Bradin Minton (2) penetrates the lane against the Cherokee defense. 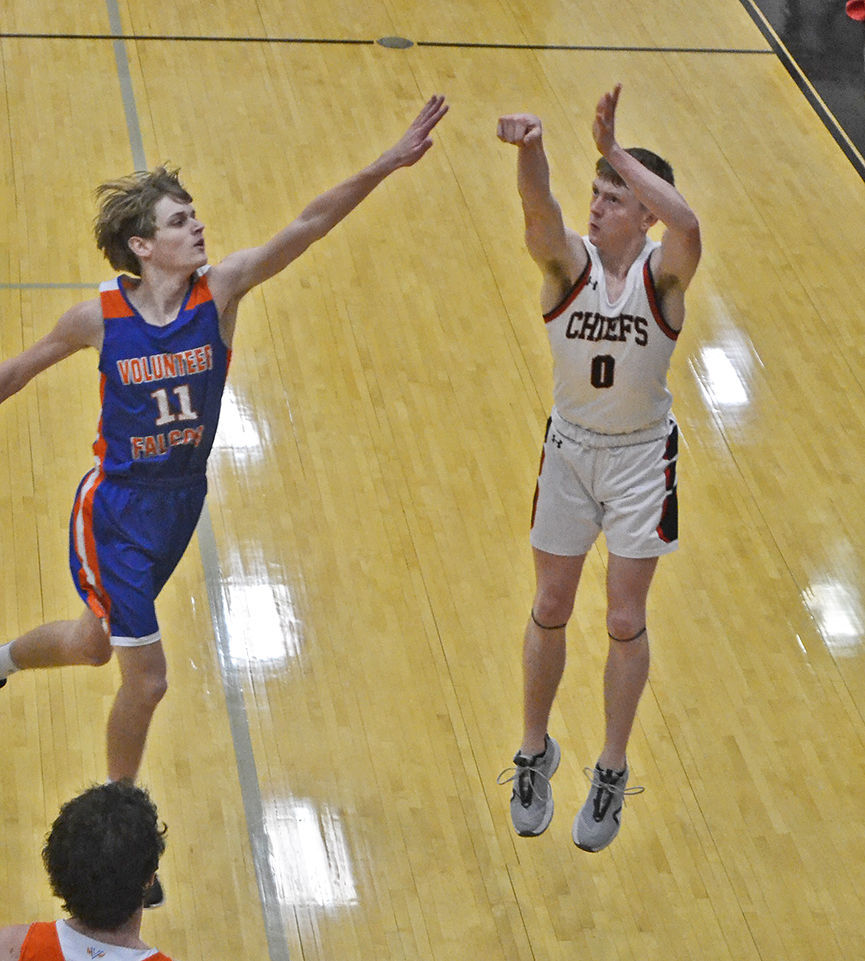 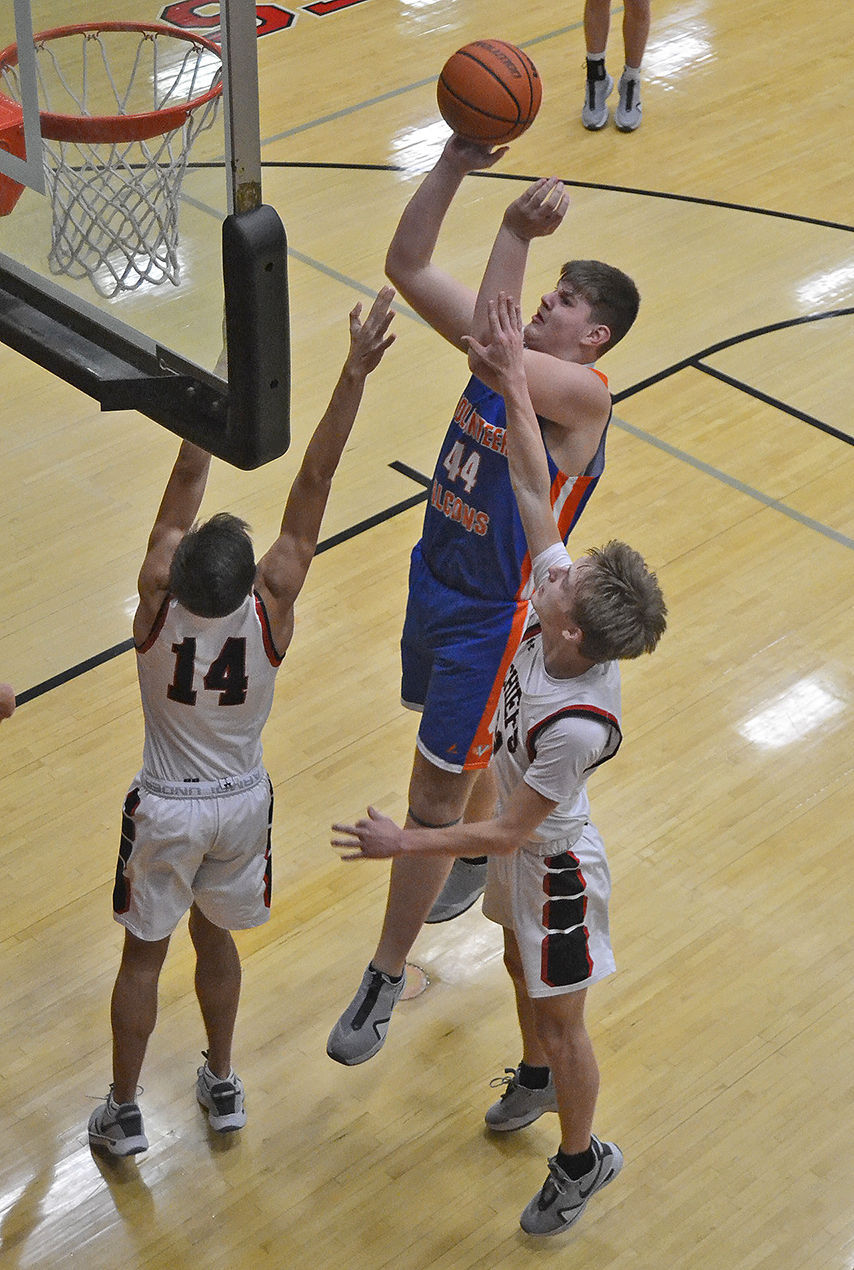 Volunteer’s Eli Amyx (44) powers up for a basket against Cherokee’s defense. 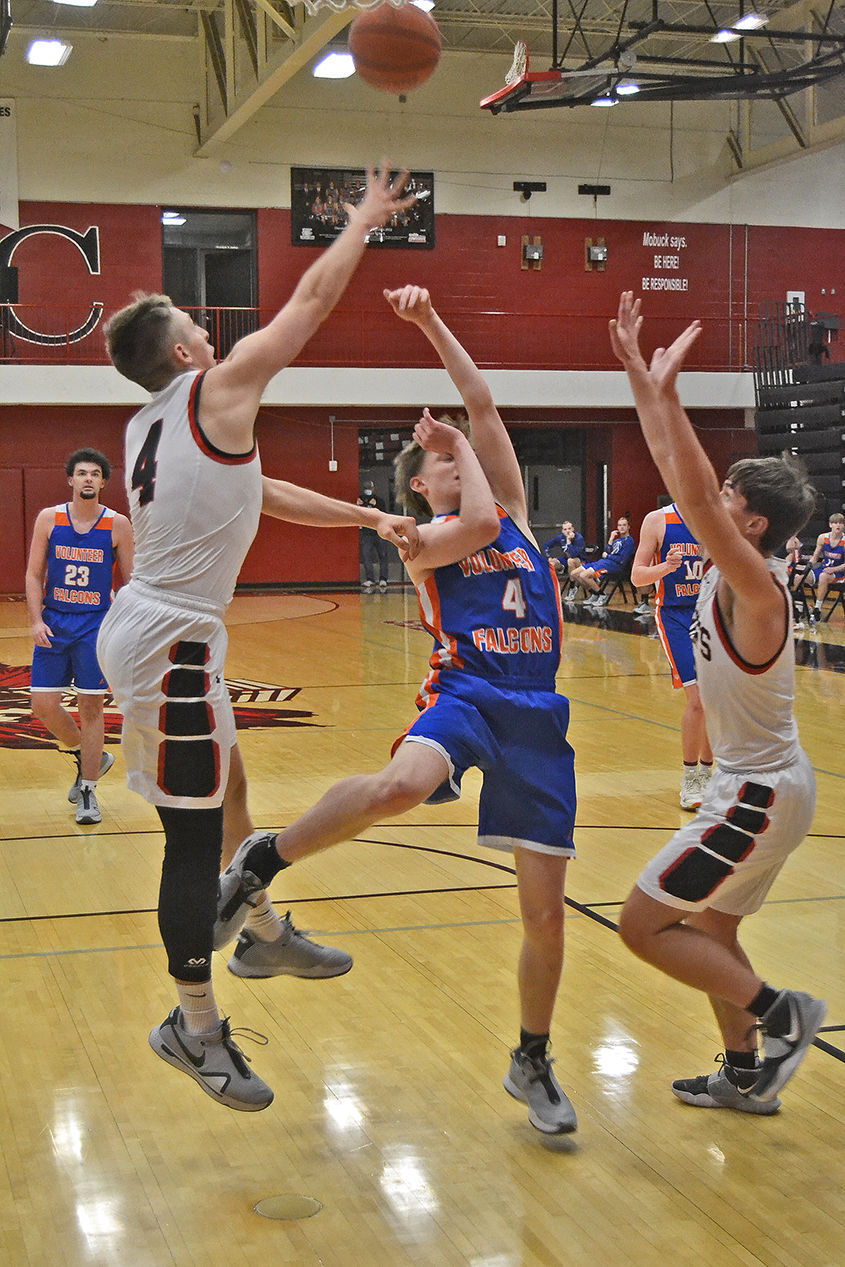 Volunteer’s Garrison Barrett (32) scores in the post in the first quarter.

Volunteer’s Bradin Minton (2) penetrates the lane against the Cherokee defense.

Volunteer’s Eli Amyx (44) powers up for a basket against Cherokee’s defense.

ROGERSVILLE – The contrast between offenses was evident Tuesday in Volunteer’s 75-65 victory at Cherokee.

Nine players showcased the deep Falcons offense by scoring at least four points each – compared to six Chiefs – and outshot Cherokee from three-point range, 11 to four.

Mike Poe’s Falcons scored the first seven points of the game, prompting a Cherokee timeout at the 6:30 mark of the first.

“They were ready to play and we weren’t,” said Cherokee coach Trey Fields. “They have a system and we’ve just got to focus more. We’ve got to come out ready to play from the beginning.

A three by Evan Berry made it 10-0, as the Chiefs wouldn’t get on the scoreboard until the 4:46 mark on a put-back by Brayden Collins. Volunteer led 17-11 after the first quarter.

“We’re playing with a lot of energy right now and sharing the ball with one another,” Poe said. “We kind of found our niche, our rotations are good. We’ve got a lot of people making plays. Obviously, when you make shots, you look awful good.

“We play at a fast pace. I have to live with some decisions. We shoot it a little quicker than I’d like to sometimes, but with the effort that they’re giving me, I can’t fault them for what they’re getting done out there,” Poe said.

The Falcons continued their kinetic attack in the second, building a 12-point lead – 25-13 – with an 8-2 run, thanks to threes by Heath Miller and Tucker Bellamy, two of six Falcons to hit treys in the game.

“We keep stressing to make the extra pass and like I said, we’re playing really unselfishly,” Poe said.

“Those kids work extremely hard,” Fields said of the Falcons. “They want to win and they do what’s asked. Don’t get me wrong, our kids do what’s asked. I’m just saying Coach Poe has them playing really well. He plays that way no matter what. That’s his system. And they’re good at it. You either learn to be good at it or you don’t play. They all shoot it really well.”

“We don’t stay in front of anybody,” Fields said. “I attribute some of that to practice. Some of that is me. I’ve got to do a better job of holding these kids accountable and making these kids do what we want them to do, and not allow them to do what they want to do.”

Volunteer crossed that threshold with an 8-2 run to start the fourth, capped by a four-point play by Andrew Knittel, which gave the Falcons their biggest lead of the game, 68-50.

“It’s kind of like I told them after the game, ‘If you want to have your best shooting night, play the Chiefs,’” Fields said. “I mean everybody shoots our face off. I don’t know if it’s because we don’t contest well, or they just shoot it that way.”

The Falcons kept the Chiefs at bay the rest of the game, holding a lead between 14 and 17 most of the stretch until Cherokee scored the game’s last six points in the final 1:02.

The game was a nice tune-up for conference action for Volunteer.

“We’ve got a really big week,” Poe said. “We’ve got to go to Daniel Boone (Tuesday) and Crockett on Friday. It’s a big week for us as far as the season goes.”

For Cherokee, it was a moment to reflect – but not for long.

“We’ve got some serious sitting down and thinking to do,” Fields said. “The bad part is we play (Tuesday) and Thursday, and Friday and Saturday. But we wanted to play. Everybody wanted to play. This is what you get when you just go play. You learn on the fly or get your face beat off.

“We’ll turn around and play Crockett again (Tuesday). Like I told them, you’re probably going to be 2-3 zoned the rest of your life. We’re just going to have to learn to get to it and get through it, and get the basketball where we want it and stop settling for shots that we just don’t need right now,” Fields said.