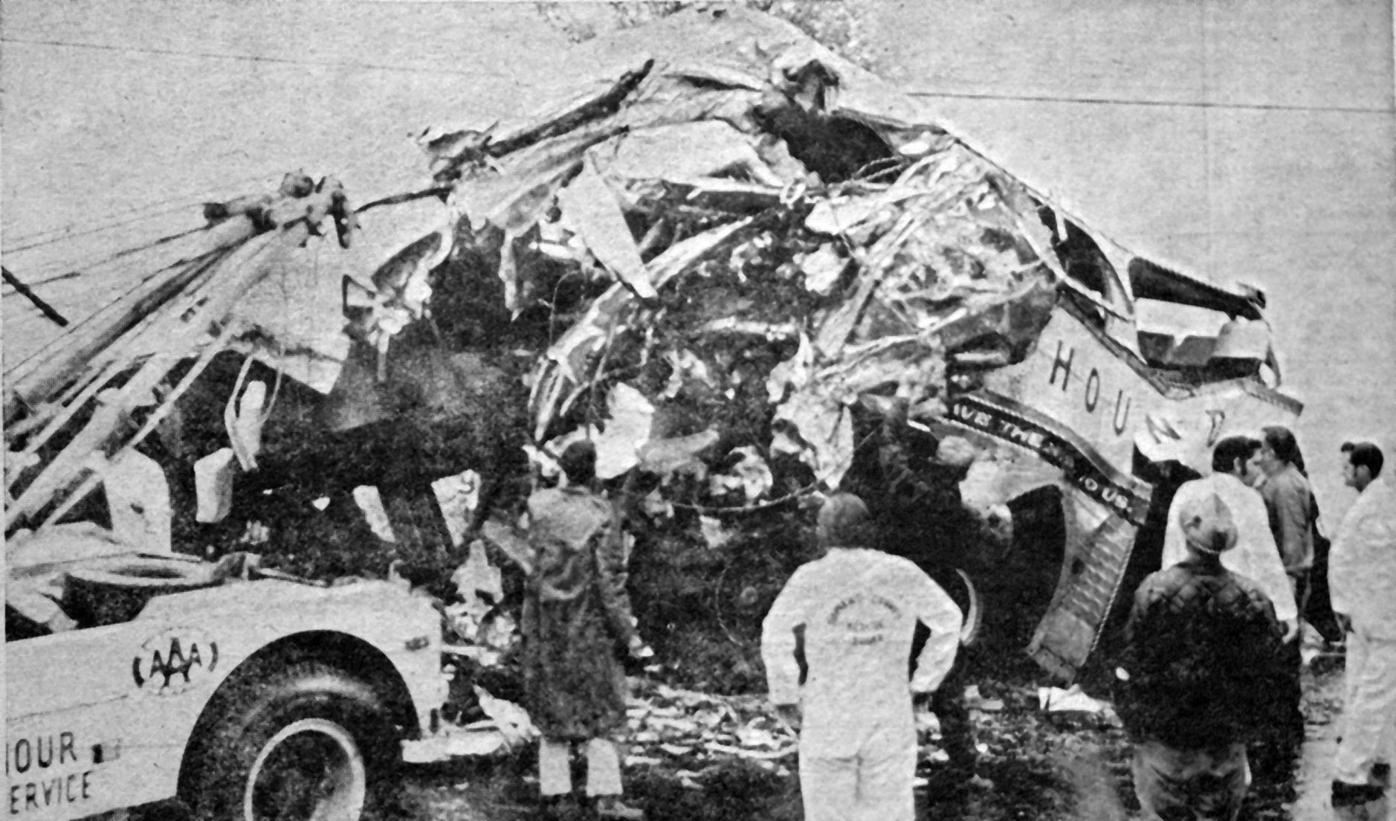 “These pictures are mute evidence of what happened when two giants of the road met early last Saturday morning on narrow 11W,” read the caption line beneath pictures of the horrific crash in the May 18, 1972 edition of The Rogersville Review. “The accident claimed the lives of 14 and injured 12 others.” In this photo, “Rescue Squad members stare at the once fleet, double-decker Greyhound bus”. The smoldering ruins of the tractor trailer can be seen in the other photo. “The drivers of both vehicles were killed and the cause of the accident is still shrouded in mystery,” the report stated. 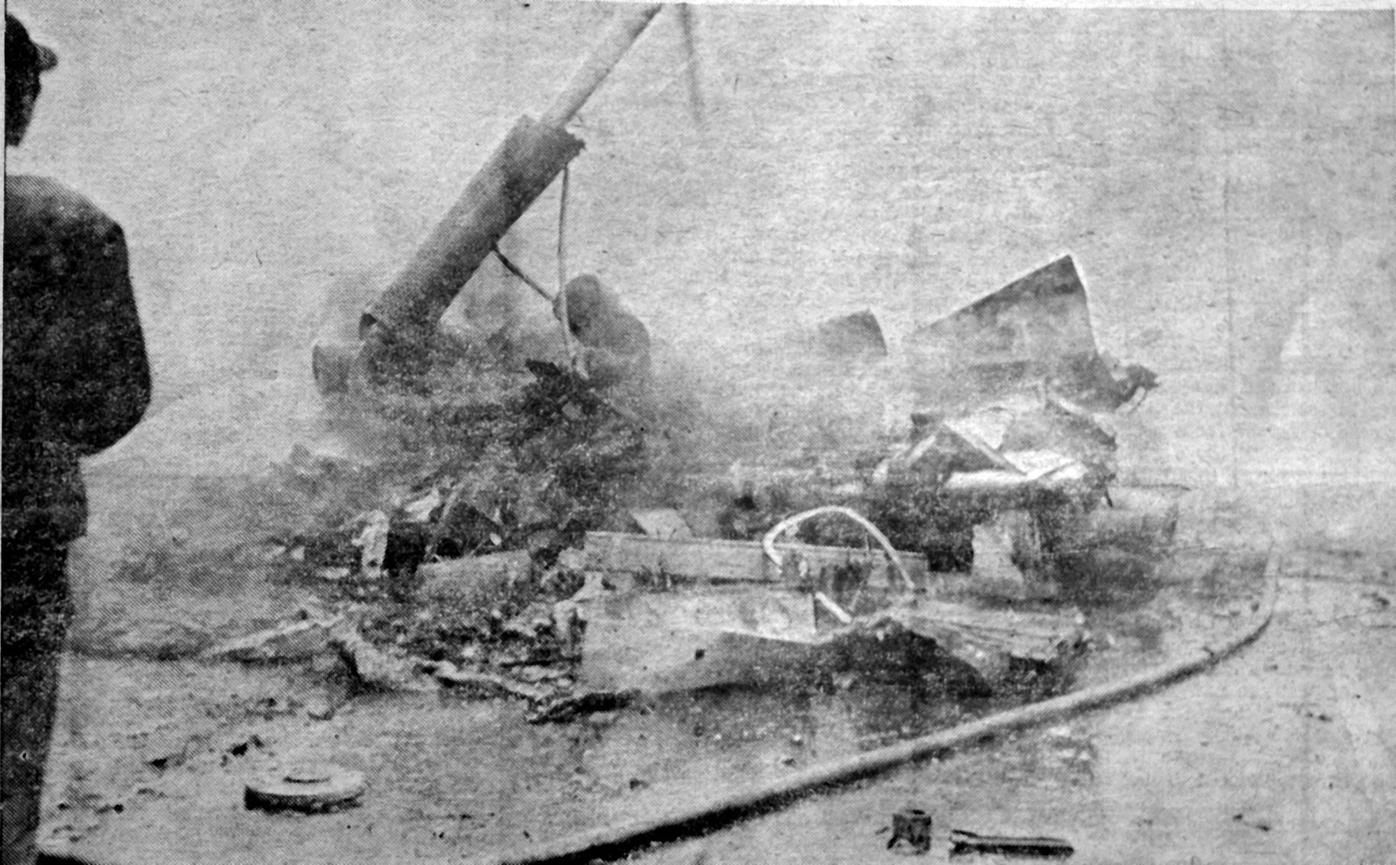 The smoldering wreckage of the semi-truck, in which the driver also died, can be seen here in a photo taken by a Rogersville Review reporter who was at the scene of the 1972 crash. 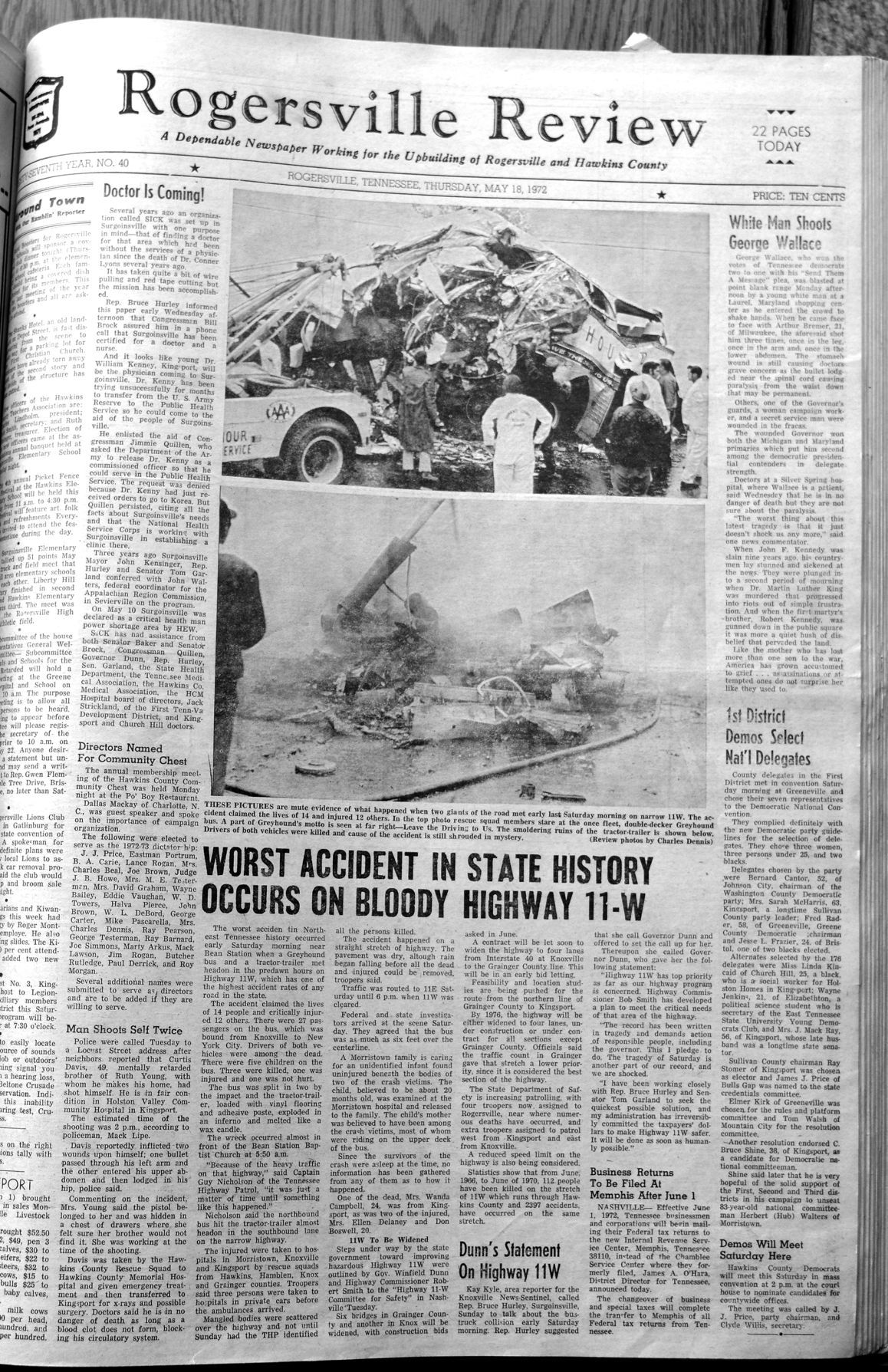 The front page of the May 18, 1972 edition of The Rogersville Review. 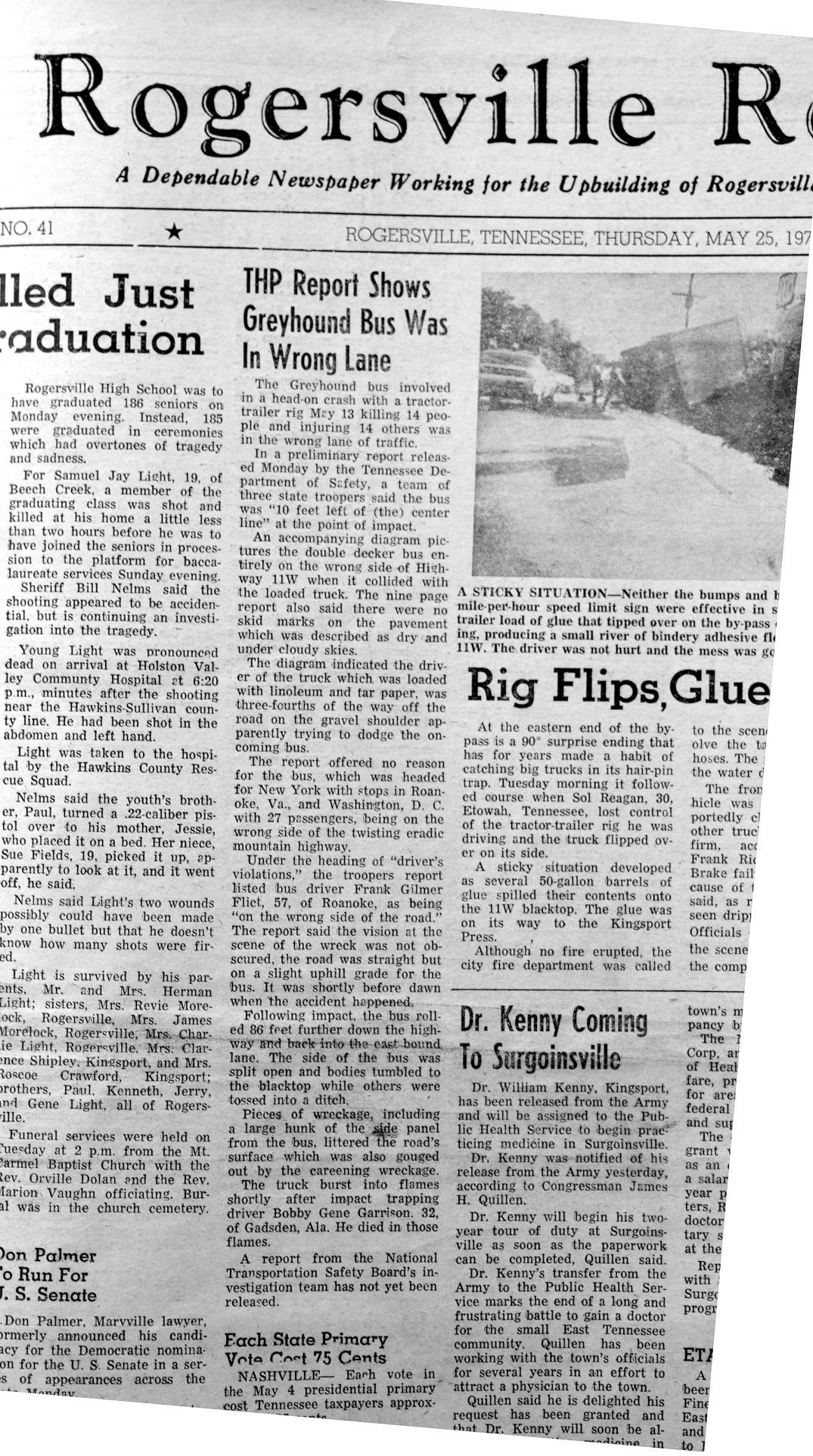 A followup story that appeared in the May 25, 1972 issue of The Review.

“These pictures are mute evidence of what happened when two giants of the road met early last Saturday morning on narrow 11W,” read the caption line beneath pictures of the horrific crash in the May 18, 1972 edition of The Rogersville Review. “The accident claimed the lives of 14 and injured 12 others.” In this photo, “Rescue Squad members stare at the once fleet, double-decker Greyhound bus”. The smoldering ruins of the tractor trailer can be seen in the other photo. “The drivers of both vehicles were killed and the cause of the accident is still shrouded in mystery,” the report stated.

The smoldering wreckage of the semi-truck, in which the driver also died, can be seen here in a photo taken by a Rogersville Review reporter who was at the scene of the 1972 crash.

The front page of the May 18, 1972 edition of The Rogersville Review.

A followup story that appeared in the May 25, 1972 issue of The Review.

The location was US 11W, almost directly in front of Bean Station Baptist Church.

In published reports of what remains to this day one of the state’s most horrific highway accidents, then-U.S. Senator Howard Baker called the grinding crash, “catastrophic evidence of the intolerable hazardous conditions which exist on this highway”.

“The worst accident in northeast Tennessee history occurred early Saturday morning near Bean Station when a Greyhound bus and a tractor-trailer met head-on in the predawn hours on Highway 11W ... ” began the front page article published in the May 18, 1972 edition of The Rogersville Review.

The crash in the early-morning hours of Saturday, May 13, claimed the lives of 14 people, including the drivers of both vehicles, and critically injured 12 others.

The bus was carrying 27 passengers and had left Knoxville, according to reports, about 4:45 a.m., about an hour and 15 minutes behind schedule, bound for New York City, with scheduled stops in Roanoke, VA, and Washington, DC. Mechanical issues had developed with the bus that was supposed to run that route, but when the problems could not be immediately fixed, passengers were transferred to another bus, accounting for the delay.

The wreck, some 42 miles north, happened just shy of an hour later.

Fourteen were pronounced dead on arrival at Morristown-Hamblen Hospital.

Of the bus passengers, five were children, three of whom were killed, one injured, and one who miraculously escaped injury, the at-the-time unidentified five-month-old daughter of Cecil and Mary Dunbar, of Forsythe, GA, whose mother was killed in the accident.

“A Morristown family is caring for an unidentified infant found uninjured beneath the bodies of two of the crash victims,” the story in the Review continued. “The child, believed to be about 20 months old, was examined at the Morristown hospital and released to the family. The child’s mother was believed to have been among the crash victims, most of whom were riding on the upper deck of the bus. Since the survivors of the crash were asleep at the time, no information has been gathered from them as to how it happened.”

“I jerked the curtain back and saw the truck sliding down the highway. The bus was just sitting there, torn all to pieces,” Jesse Coffey was quoted as telling a reporter at the time.

Coffey said he ran over to the bus and began pulling victims from the twisted metal.

“I heard a baby crying. Some guy was hollering, ‘help me! help me!’” he said. “The motor of the bus was still running and we cut if off for fear the bus would catch fire. There was no way to tell how many people there were on the bus because they were torn up so bad.”

One of the fatalities, and two of those injured were from Kingsport — Wanda Campbell, 24, who died in the wreck, and two others, Ellen Delaney and Don Boswell, who were hurt but survived.

The bus was split in two by the impact and the tractor-trailer, loaded with what appeared to be vinyl linoleum flooring, tar paper, and adhesive paste, exploded in what was described as an “inferno”, entrapping and killing truck driver Bobby Gene Garrison, 32, of Gadsden, AL.

Capt. Guy Nicholson, of the Tenn. Highway Patrol, told the Review at the time that the northbound bus hit the tractor-trailer rig head-on in the southbound lane on the narrow highway.

“Because of the heavy truck traffic on that highway, it was just a matter of time until something like this happened,” Nicholson said.

Law enforcement, Rescue Squad personnel, and ambulances from multiple surrounding counties rushed to the scene and used a variety of tools and devices to cut into the wreckage to remove victims, both living and dead.

First on the scene at 5:58 a.m. were members of the Grainger Co. Rescue Squad, records indicate.

The Grainger Co. Sheriff’s Department was notified about 5:50 a.m. by the driver of the car that the bus driver was reportedly trying to pass, who drove on ahead to a nearby truck stop and used the phone there to call authorities.

“Mangled bodies were scattered over the highway and not until Sunday had the THP identified all the persons killed,” the Review article stated.

The accident happened on straight, dry stretch of 11W, although rain began to fall before all of the dead and injured could be removed, news reports said.

Federal and state officials who arrived on scene later in the day agreed that the bus was several feet over the center line and into the oncoming lane of traffic, the article continued.

A followup story in the May 25. 1972, edition of the Review stated that, in a preliminary report issued by the Tennessee Department of Safety, a team of three State Troopers determined that the Greyhound bus was, in fact, “10 feet left of (the) center line” at the point of impact. An accompanying diagram, the article said, pictured the double-decker bus “entirely on the wrong side of Highway 11W when it collided with the loaded truck”.

The nine-page report, it was reported, stated there were no skid marks on the pavement which was described as “dry and under cloudy skies”.

“The diagram indicated the driver of the truck, which was loaded with linoleum and tar paper, was three-fourths of the way off the road on the gravel shoulder apparently trying to dodge the oncoming bus,” the article states. “The report offered no reason for the bus, which was headed for New York with stops in Roanoke, VA and Washington, DC, with 27 passengers, being on the wrong side of the twisting, erratic mountain highway.”

Under the heading of “driver’s violations”, the state report listed bus driver Frank Gilmer Flict, 57, of Roanoke, VA, as being “on the wrong side of the road”. It further stated that “vision at the scene of the wreck was not obscured, and that the road was straight but on a slight uphill grade for the bus”.

“The side of the bus was split open and bodies tumbled to the blacktop while others were tossed into a ditch,” the article states. “Pieces of wreckage, including a large hunk of the side panel from the bus, littered the road’s surface which was also gouged out by the careening wreckage.”

The National Transportation Safety Board, which investigated the crash, later issued a 38-page report on Feb. 8, 1974.

Among other things, the report said that, based on the speed each vehicle was traveling, the time for “perception, decision, and reaction” was a scant 3.2 seconds for each driver.

The NTSB determined “the cause of this accident was two-fold:

(1) the bus being in the opposite lane of traffic while it was passing a car without unobstructed clear-sight distance ahead; and,

(2) the bus driver’s failure to avoid the tractor-trailer.

“The truck driver had no alternative as to the evasive action which he took,” the report states, indicating that the truck driver tried to give the bus as much clearance as possible and still not wreck the truck.

“It is possible that the truck driver felt he had given the bus enough room to pass safely and expected the bus driver to swerve toward the eastbound lane and thus avoid a collision,” the report states.

Evidence and witness observations indicated that there was “sufficient room for the bus to pass between the oncoming truck and the automobile which the bus was passing”, the report continues, adding that “the bus driver could have avoided the truck”.

The car the bus attempted to pass was driven by an adult male with a hitch-hiking passenger.

The driver told federal investigators that he, himself, passed a slower-moving car in front of him. After the car and bus crossed a bridge, about 1,500 feet into a curve, the bus pulled out to pass the car.

According to the NTSB report, about that time, the driver of the car saw a tractor-trailer rig approaching in the westbound lane of US 11W. Another semi-rig, about 250 feet ahead of the car in the eastbound lane, had prevented the car driver from seeing the approaching truck.

Published reports indicate that as the car’s driver realized an accident was about to happen, he accelerated in an attempt to give the Greyhound driver space to move back into his own lane.

The report also noted that had that section of US 11W been marked with a double-center line, the bus driver might not have tried to pass the vehicle.

The crash spurred calls for widening or four-laning 11W, better traffic markings, and also resulted in the reduced speed limit — 50 MPH — that is now in effect for the entire length of the road, outside of cities, between Blaine and Bean Station.