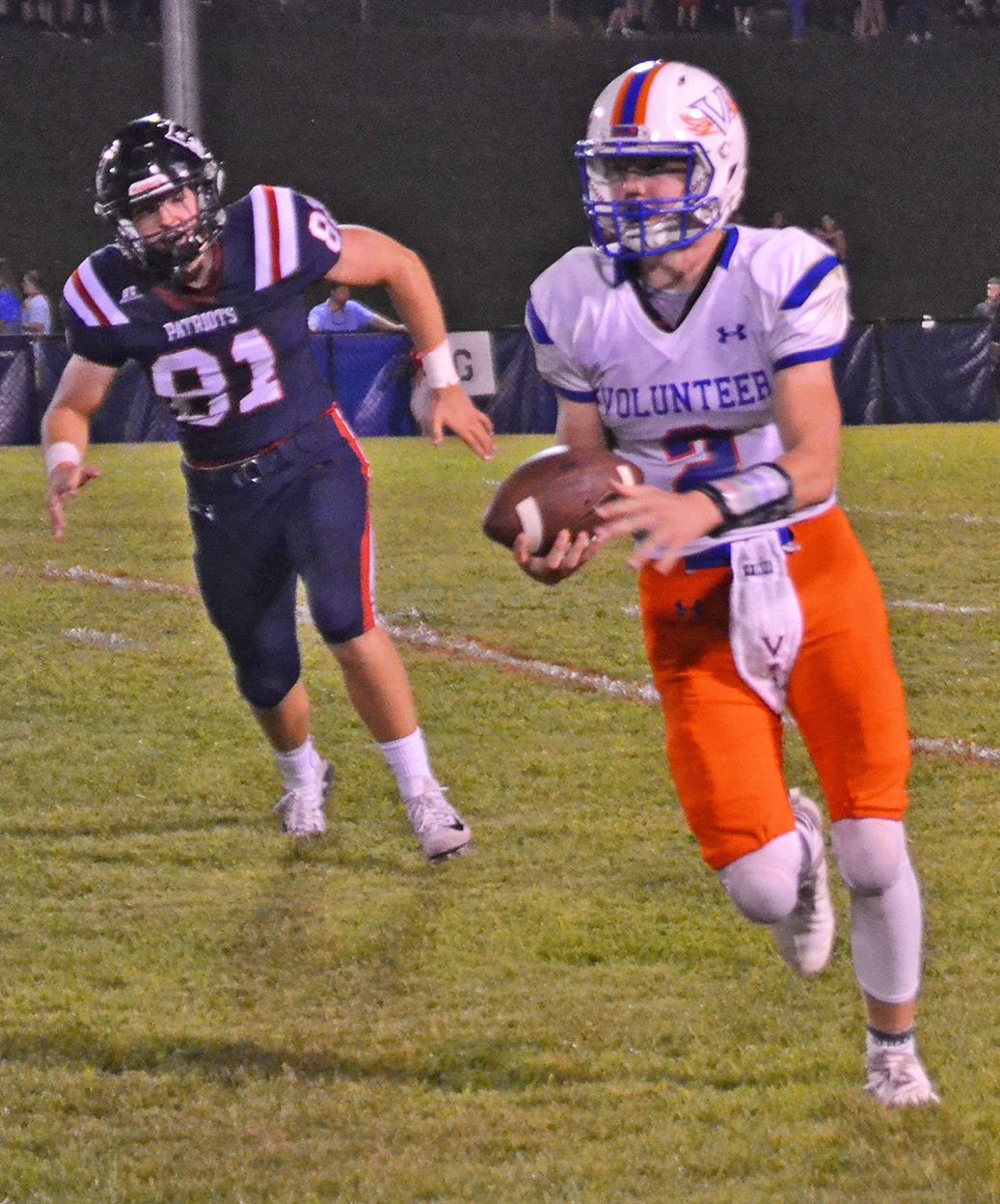 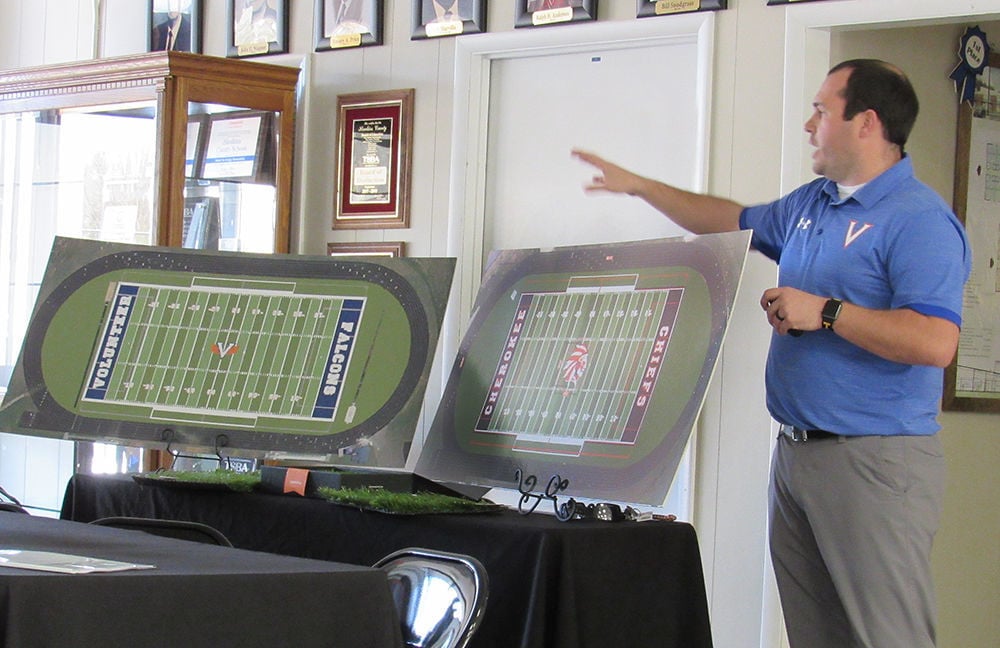 Back in early 2019, VHS Assistant Football Coach Josh Castle spoke to the BOE’s athletic committee about installing turf at both schools.

Back in early 2019, VHS Assistant Football Coach Josh Castle spoke to the BOE’s athletic committee about installing turf at both schools.

Despite the 1.25 million cost, the Hawkins BOE voted 5-2 on Monday to purchase artificial turf for both Cherokee and Volunteer High Schools.

This decision came after a lengthy discussion at the board’s regularly scheduled meeting on Thursday, June 4. Members were not able to come to a consensus, so the board reconvened on Monday, June 8 when Director of Schools Matt Hixson brought some additional information on the turf options.

The idea of purchasing artificial turf for the county high schools is not a new one. In fact, the option was first heavily considered over a year ago.

During Thursday’s meeting, the board initially debated whether to repair the drainage problems and sod at VHS or purchase artificial turf for both schools.

Hawkins County Extension Agent Jack Price and Dr. Tom Samples, Ph.D. from the University of Tennessee Turfgrass Science and Management Department, actually examined the VHS field earlier this spring and concluded that it was unsafe to play on.

The sod would cost $240,000 for VHS only, and this would include redoing the crown at the current grass field as well as stripping and grading the field to the proper slope and repairing the irrigation system. However, this option would have rendered the field unusable for the 2020 football season.

CHS’s current grass field is in good condition, so this option would only involve VHS.

Artificial turf would cost $593,754 for Volunteer and $605,695 for Cherokee. This bid would include new goal posts at both fields, and Hixson noted that there were “ceiling prices.”

Hixson also noted that if turf is installed, coaches would not have to worry about lining fields and would have more time for stadium maintenance.

The $1.25 million that was appropriated at Monday’s meeting also includes a buffer of around $50,000.

Hixson noted that there are options to reduce the cost of turf such as a sales tax incentive on the purchase of materials and the opportunity to sell advertising on the field.

He went on to propose that the money be taken out of the undesignated fund balance to pay for the turf.

Though BOE Chairman Chris Christian made the motion on Thursday to go ahead with the artificial turf, several other board members requested to hear more information on the longevity of artificial turf before making a decision.

Hixson presented this information to the board when they reconvened Monday morning.

Though Hixson told the board on Thursday that several vendors had claimed that the turf could last up to 15 years, he noted on Monday that “eight to 10 years is the max on use” before it needed replaced “if it is used for all-terrain sports or if the field sits in the direct sun.”

“There are some rare examples that it goes beyond 10,” Hixson added. “The material itself could hold up a maximum of 15, but, because of the UV breakdown, which they’ve not been able to do much about, getting 12 years out of a field before testing shows that being the typical lifespan of being able to use the field.”

He went on to add that, between 12 and 15 years old, the turf might also begin to show visible signs of age and be less aesthetically pleasing.

Industry guarantees are set at eight to 10 years, depending on manufacturer and installer.

The board looked into the manufacturer known as Baseline, which uses Shaw Sports Turf.

CHS to receive turf next year

The board’s original motion specified that VHS would have turf installed in the 2020-2021 year and CHS’s would be installed two to three years from now. However, member Judy Trent amended the motion on Monday to specify that CHS would receive turf next year (at the end of the 2021 playing season.)

“We don’t know if we’ll even be in school come the first of August—six weeks from now—much less playing contact sports,” Larkins added.

He then touched upon the fact that many Americans are in difficult financial situations right now due to COVID-19, and Hawkins Co. teachers may be among them.

He also quoted several scholarly articles that claimed sod is safer for players than turf.

“We also just made a very important decision to close two schools to save money and better use our resources in Hawkins County,” Larkins added. “I have a real problem with trying to justify in my own mind without having done a lot of research. What little I’ve done tells me it’s not the wisest move to make at this time. I would like to see the right turf field at both schools, but, financially, I don’t think it’s the right time.”

“I take the responsibility of spending this type of money for our system very seriously, as I know each of us do,” Shedden added.

She went on to share her findings after speaking with representatives from five East Tennessee high schools that have artificial turf.

“To think that we might have this in by the time that school starts is unrealistic,” she said. “As far as doing both schools, we need to make sure of the economic climate at that time. We need to make sure that we’re going to have the money to support that second school, and we don’t know that. I can’t go along with jumping into something this quickly…”

She also advised that her research indicated that there is much more to installing and maintain turf than meets the eye—and the maintenance alone often costs more than anticipated. She also concurred with Larkins’ point that sports may not even be allowed this fall due to COVID-19 restrictions.

Despite the two opposing views, the motion passed, and the budget amendment setting the $1.25 million aside for the turf will go before the Hawkins County Commission at their June meeting. If it passes, work at VHS will begin immediately.