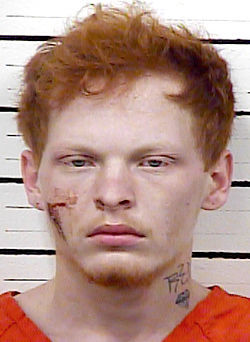 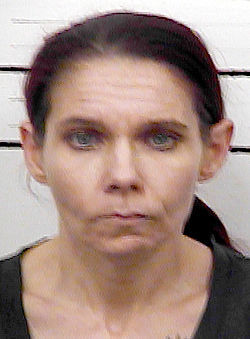 ROGERSVILLE — A Kingsport man — considered armed and dangerous — who was the subject of a countywide manhunt earlier this week after he allegedly went on a crime spree through the northwestern part of the county, was found and arrested Wednesday evening around 6 p.m. ... hiding under a bed in his girlfriend’s home.

Hawkins Co. Sheriff Ronnie Lawson told the Review that Devin Allen Ray Rose, age 19, of Stonegate Road, was being sought in connection with a bizarre crime spree that resulted in the theft of multiple vehicles, aggravated assault on a police officer, and a litany of other charges.

On April 1, 2020, HCSO, with the assistance of the Sullivan Co. Sheriff’s Office, served an arrest warrant for Rose at an address on Hickory Hills Road, Church Hill.

“Both advised no one was there,” the sheriff said. “Mr. Rose was found in a locked bedroom hiding under a bed.”

Amy Powell and Haley Powell were both arrested for Accessory After the Fact, Lawson said.

Rose is charged with:

• Leaving the scene of an accident (three counts);

• Driving on a revoked or suspended driver license; and,

How it all began

On March 31, about 5:30 p.m., Deputy Hunter Clay Jones was dispatched to the Whistle Stop Store, in Church Hill, in reference to a possible location of a stolen vehicle.

Sheriff’s Deputies responded to an address on Hickory Hills Road, Church Hill, where they wee advised by the complainant that the driver was armed and dangerous.

“Upon our arrival at the scene, deputies made contact with the suspect, later identified as Devin Rose, of 1000 Stonegate Road, Kingsport, at the rear of the residence,” Lawson said.

Deputies ordered the suspect to stop but Rose fled on foot and got into the stolen truck.

“At that time, Mr. Rose fled the scene in a reckless manner and nearly struck deputies,” Lawson said.

“He then exited the rear yard and drove through a field where he then struck another fence re-entering Hickory Hills Road,” Lawson said. “Due to Mr. Rose driving with complete disregard for the life and limb of the general public and all involved law enforcement officers, deputies attempted to stop the vehicle and both vehicles collided causing damage to patrol cars.”

At that time, Rose fled north on Hickory Hills Road, then struck yet another patrol car driven by a deputy, before wrecking at Bright Road where he again fled law enforcement on foot, lawson said.

A check of Rose’s driving status revealed him to be suspended in Tennessee for Failure to Show Proof of Financial Responsibility out of Sullivan County with an action date of 02/12/2019.

Authorities were on high alert and on the lookout for Rose, who was said to be armed and dangerous, when, on Wednesday, April 1, HCSO Detective Ken Sturgill received a report of a stolen vehicle.

“The investigation revealed that on March 31, 2020, a victim on Carters Valley Road, Church Hill, TN, reported that his black 2013 Ford F-150 truck, had been stolen from his residence between the hours of 2:30 a.m. and 8:30 a.m.,” Lawson said. The victim noticed his truck missing at 8:30 a.m., and after reviewing video footage, Rose was observed to be driving the stolen vehicle.

Lawson said that since this is still an active and ongoing investigation, no additional details can be released at this time.

“The Hawkins County Sheriff’s Office would like to thank the media and followers of social media, for all their assistance and tips in getting Mr. Rose safely in custody,” the sheriff said.