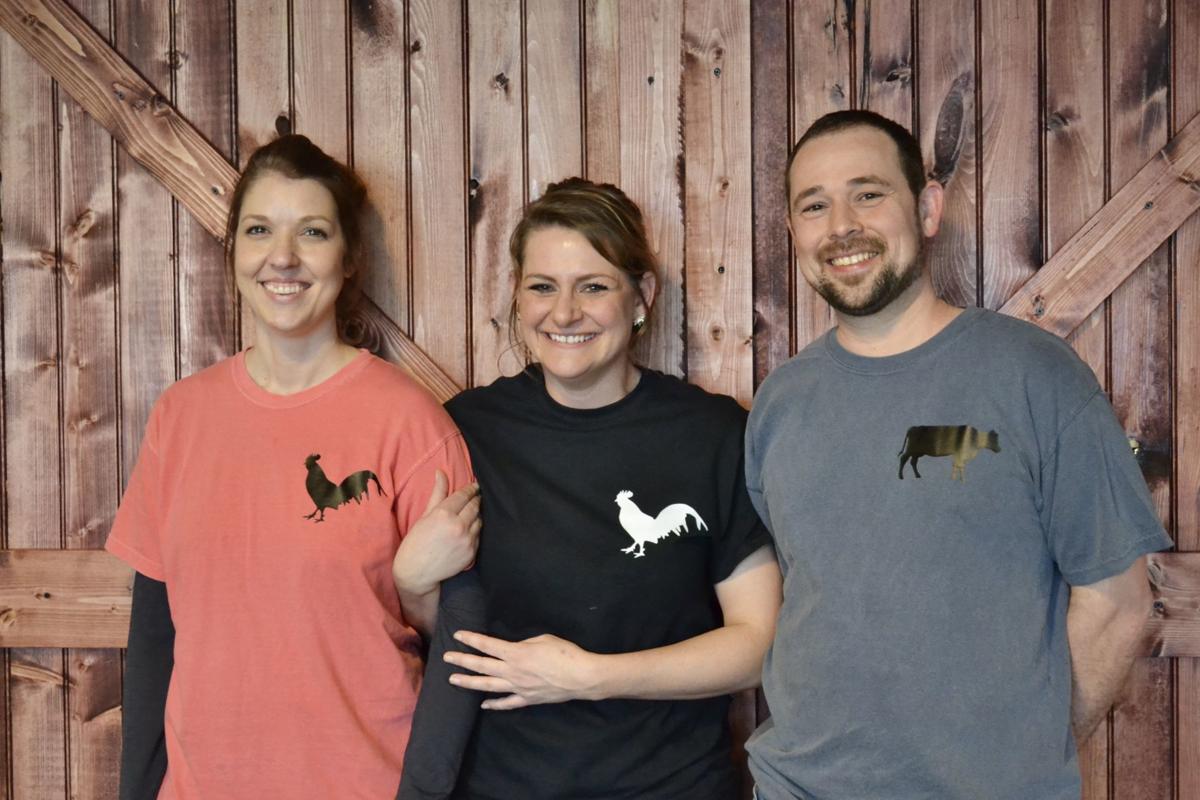 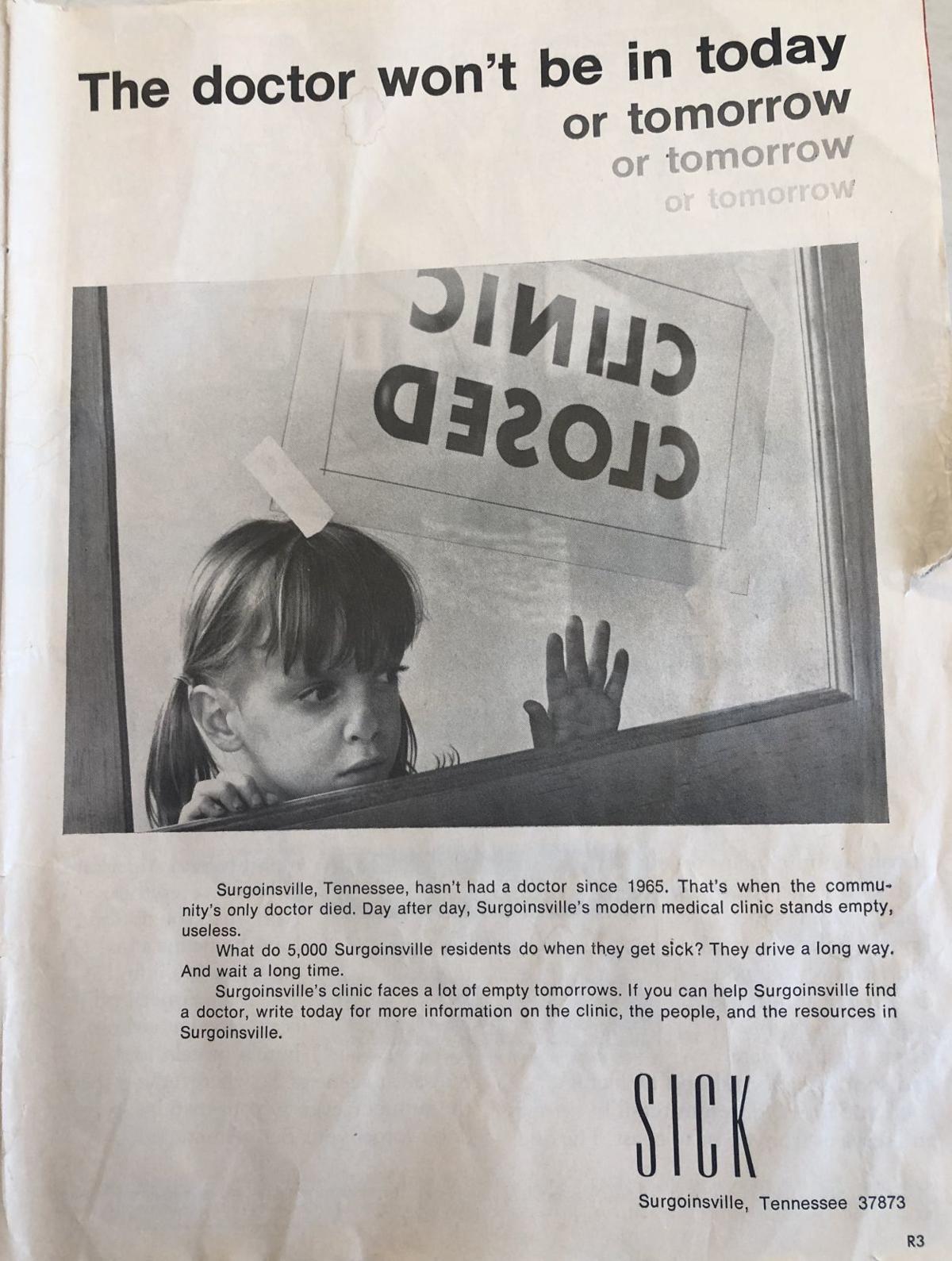 Surgoinsville has had trouble finding a doctor since Dr. Connor Lyons passed away in 1966. The Bryans found a 1969 TIME magazine with this article inside about Surgoinsville. 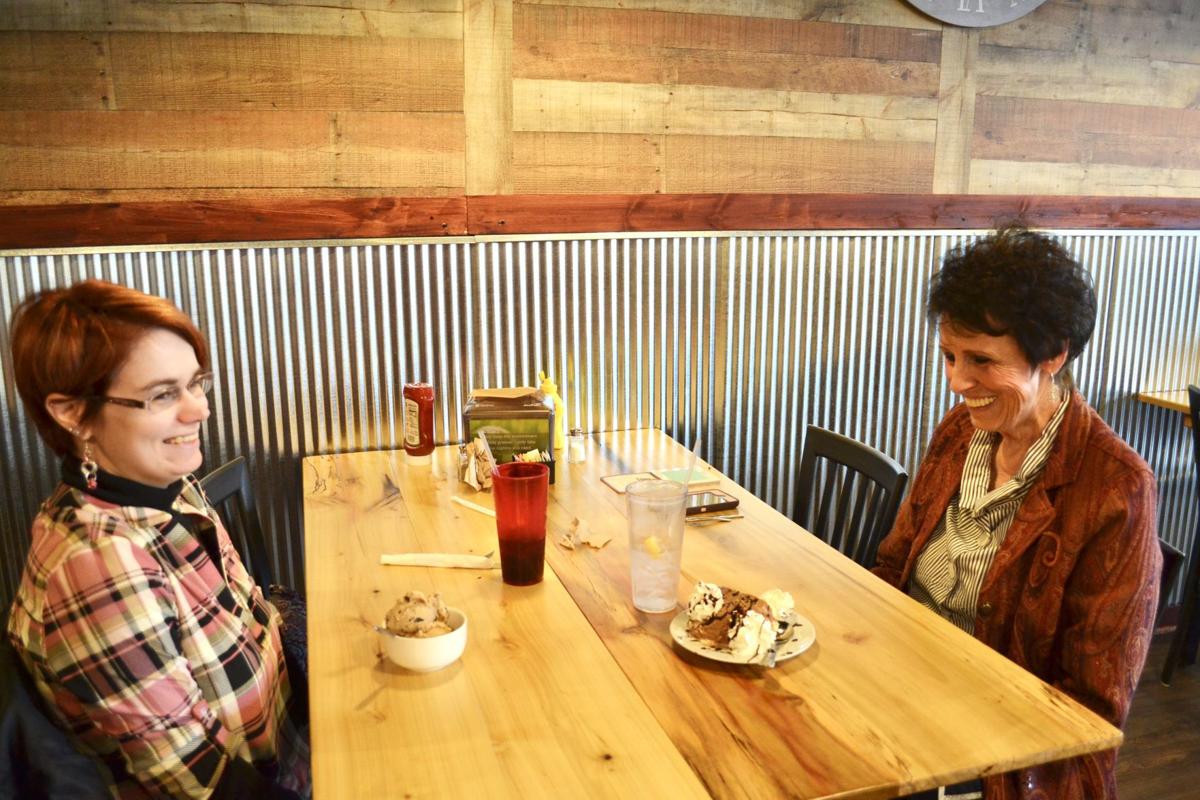 Two patrons enjoy their dessert at Surgoinsville’s Farmacy Grill. All of the tables were hand made by owner Shaloam Bryan. 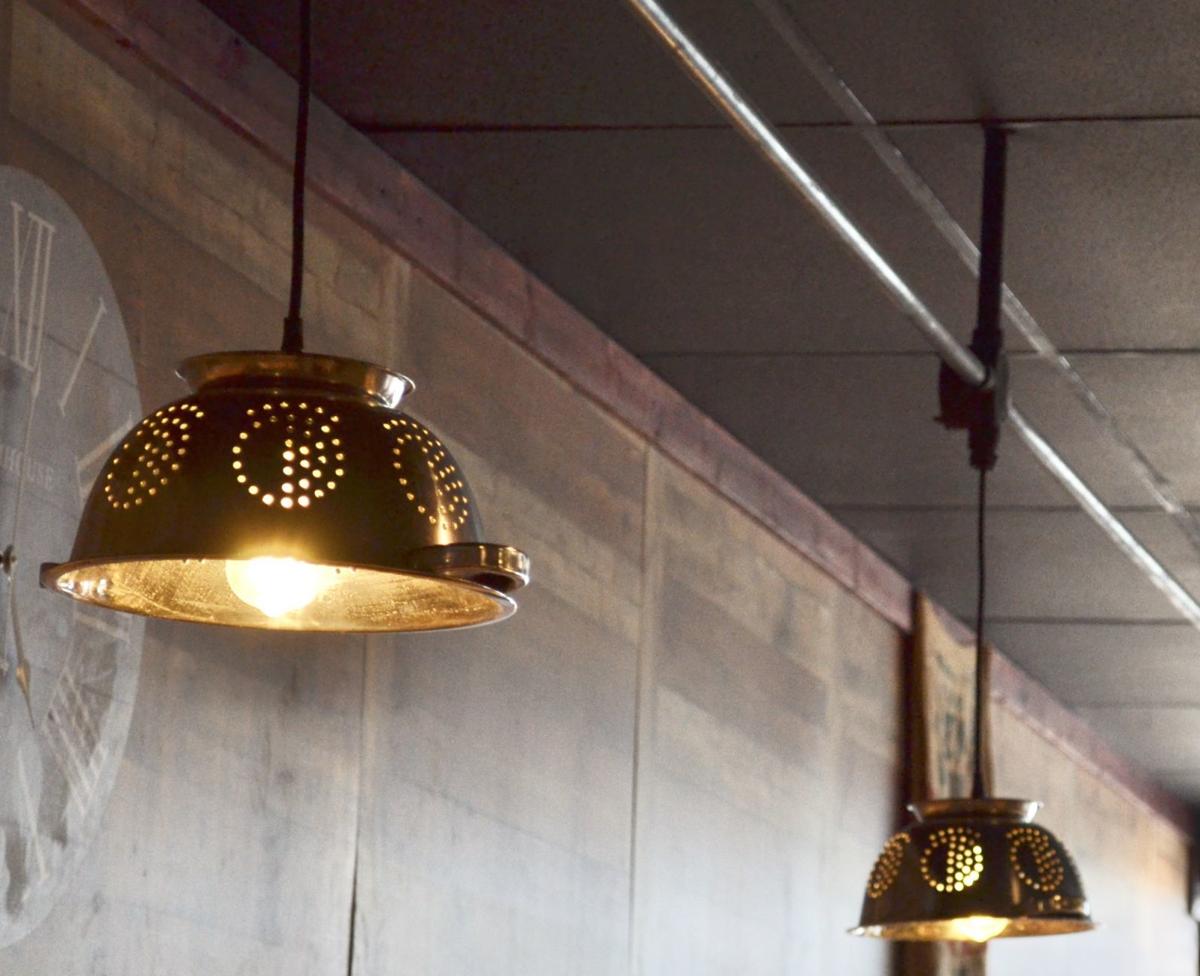 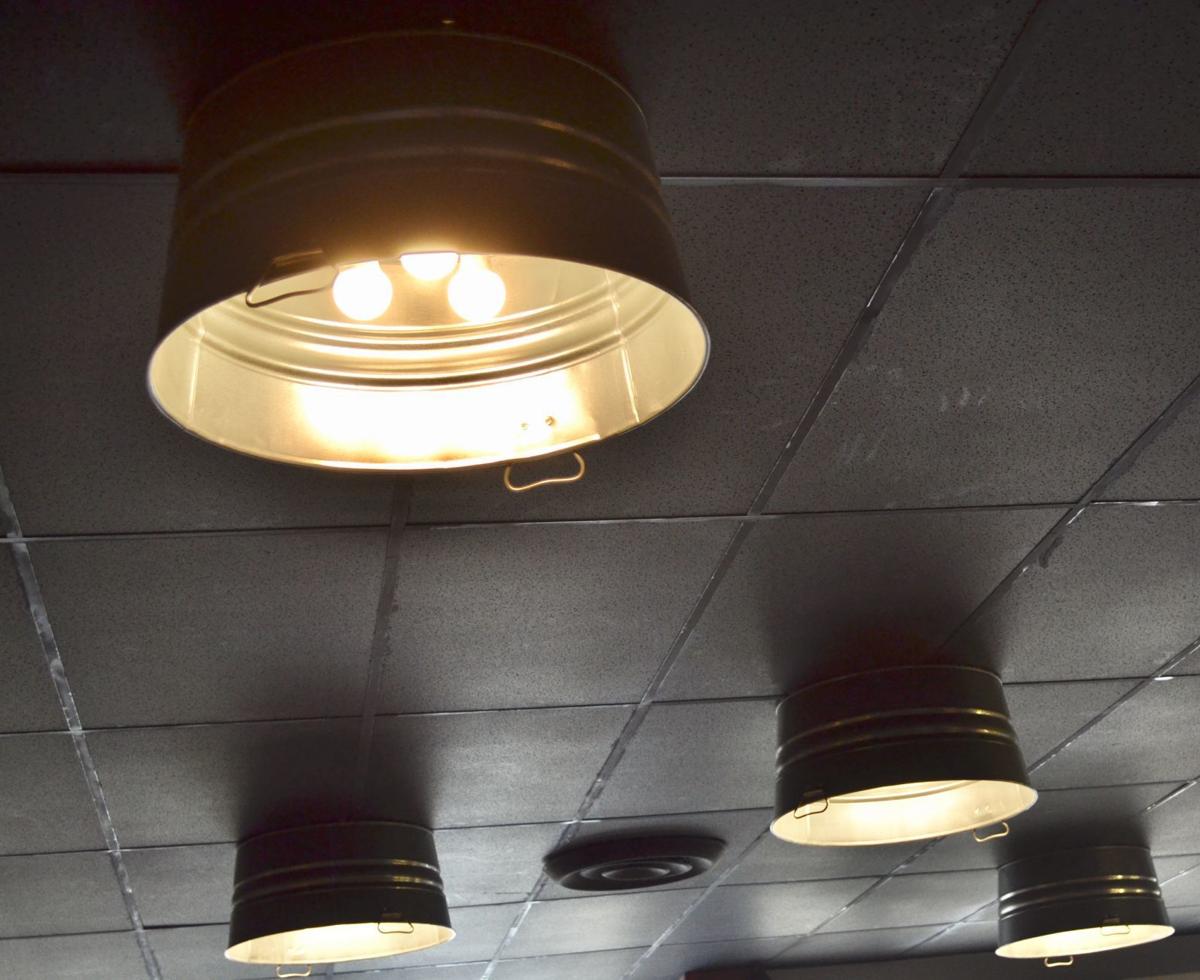 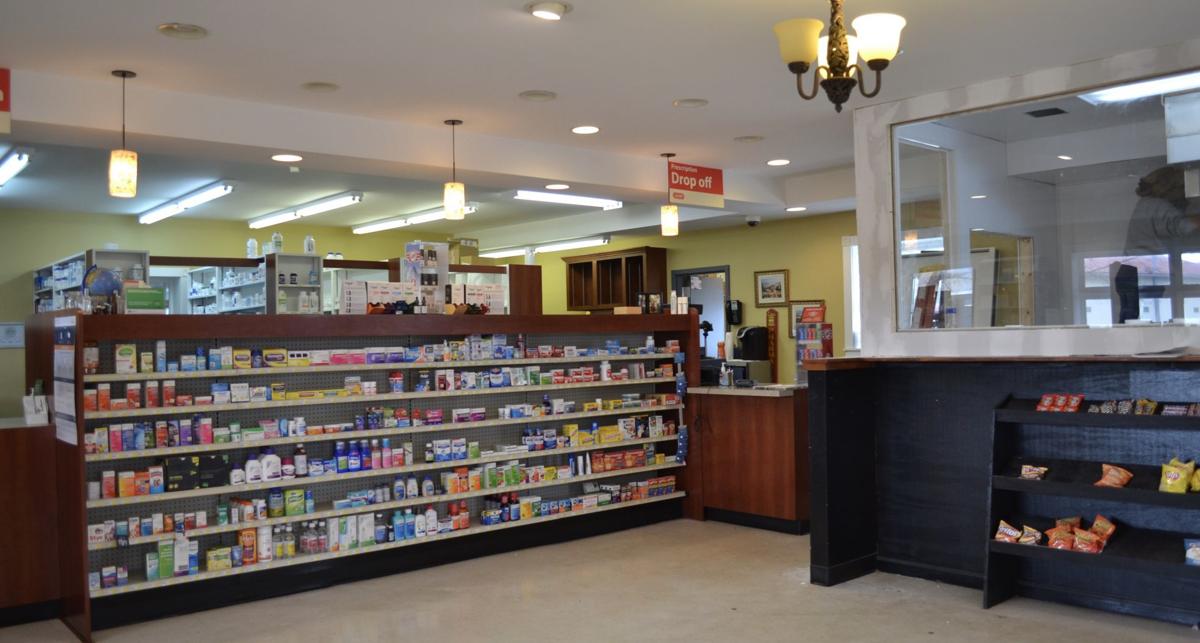 The Farmacy Grill is an expansion of the small restaurant that was originally housed within the Surgoinsville Pharmacy in the space seen on the right side of this photo.

Surgoinsville has had trouble finding a doctor since Dr. Connor Lyons passed away in 1966. The Bryans found a 1969 TIME magazine with this article inside about Surgoinsville.

Two patrons enjoy their dessert at Surgoinsville’s Farmacy Grill. All of the tables were hand made by owner Shaloam Bryan.

The Farmacy Grill is an expansion of the small restaurant that was originally housed within the Surgoinsville Pharmacy in the space seen on the right side of this photo.

A work of love and passion, the Surgoinsville Farmacy Grill officially opened in late January and has been flourishing ever since.

Beth and Shaloam Bryan are both Pharmacists and have owned the Surgoinsville Pharmacy since 2012 and the now Farmacy Grill building since 2014.

“After a lot of work, sweat, blood and tears, this all came together,” Beth said. It’s really fun to see people appreciate it. We’ve even had people in the community tell us, ‘I’m so proud of this’ That has really meant a lot to me.”

Just next door to the actual Surgoinsville Pharmacy, the Farmacy Grill is an expansion of the small restaurant that was originally housed within the Pharmacy. As the in-house restaurant became increasingly popular, the small space could no longer house everyone who came to eat.

“There wasn’t enough room for everybody who wanted to eat there, and people were actually having to leave because there weren’t enough seats,” she said.

When the restaurant first opened in January, Beth explained that they first held a ‘soft opening’ to get a feel for how it would be received by the community.

“We were not expecting to be this busy this quick,” Shaloam added. “We’re already almost maxing out in space ever day.”

They estimate that they have served over a hundred people per day since they’ve been open.

“It really added some life to the community,” Shaloam said. “It’s the first new thing in the downtown area that’s been here in a while.”

They also have big plans for the future.

They hope to eventually extend their hours to include dinner and Saturday options. They currently are only open from 10 a.m. to 3 p.m. Monday through Friday, which are the same hours the restaurant operated when it was located inside the Pharmacy.

Once they begin serving dinner, they plan for the hours to be 10 a.m. to 8 p.m. Monday through Saturday.

“The plan was to be open for dinner as well, but we’re just finding the right staff that will be able to do it in the evenings,” Shaloam said. “We’ve gotten most of the staff hired now, and, hopefully, within the next couple of weeks we will serve dinner at least on a Wednesday through Saturday basis.”

“Our goal is to have the perfect staff because, so far, everybody’s had a great experience and we want that to continue,” Beth added.

They tried out the dinner option with a successful Valentine’s Day dinner, reservation-only special.

An empty building finds a purpose

“We have had this building sitting here empty for probably 10 years while we were looking for health care professionals that would come here to town,” Beth Bryan said. “One day, when the restaurant was still inside the Pharmacy, I looked over at (restaurant manager) Kyra (Jenkins) and could tell she was drained. I said to myself, ‘we need to move the restaurant.’ I knew this building was just sitting here empty, so I talked to Kyra about moving it.”

The Bryans began the renovation process in October of 2019, and it was rather difficult, as the building had been completely vacant since 2009.

“The building was awful when we first started on the restaurant,” Shaloam said. “It was a complete remodel, and we’re still ironing out some of the issues. We put a brand-new heating system in, re-did the bathrooms, took out the old bathroom and re-did all the floors, walls and ceilings. It was basically just a block building with old, commercial tile when we got it.”

They also added a separate dining room in the back that can be closed off to house private events. Whereas the small space within the Pharmacy could seat roughly 25 people, the new restaurant can seat around 80.

Keeping the ‘farm’ in the Farmacy Grill

Though modern-day ‘autocorrect’ doesn’t understand it, the Bryans were intentional about the name they chose for the restaurant.

“Everybody always called the old restaurant, ‘the Pharmacy’ anyway,” Shaloam said. “We didn’t really want to change that, but we wanted to keep the Pharmacy as a medical building. So, we figured a play on words worked nicely. With that, came the look and everything else associated with that.”

Both Jenkins and the Bryans worked together to come up with the farmhouse-inspired interior theme and put a lot of labor into the process.

The building that now houses the Farmacy Grill is known to Surgoinsville natives as “the old Williams Drugstore,” as it held a pharmacy before the current Pharmacy opened in 2009.

The bar in the restaurant is original to the building and actually has the name ‘Mary Williams’ written underneath it.

Mary Williams ran the Surgoinsville Pharmacy many years ago and also had a restaurant within her business.

“There are stories about her growing her own garden and going out there to get her own tomatoes for the restaurant,” Beth said.

“I never planned to be in the restaurant business”

As two pharmacists, the Bryans explained that neither of them ever expected to be in the restaurant business.

It all started when they bought the Surgoinsville Pharmacy, as the building came equipped with the small deli inside. The previous owner had opened the Pharmacy in 2009 but closed the restaurant portion around 2011.

“When we bought the Pharmacy, the restaurant inside had been shut down, and we opened it back up,” Beth said. “I found our original menu the other day, and it was about a quarter of a page. We pretty much just served sandwiches at first.”

After running both the Pharmacy and its accompanying restaurant for a while, Beth explained that it soon became clear that she needed some help.

“I couldn’t do a restaurant and my pharmacy business,” Beth said. “So, I hired Kyra, and she’s just amazing, as you can see. She’s got a real passion for it, and she’s good at what she does.”

The Bryans are still passionate about bringing better health care to the Surgoinsville area and have built a small clinic in the back of the current Pharmacy. It is stocked and ready to go—it just needs a healthcare professional to fill it.

“Originally, we had blueprints and everything for a medical practice to move into this building (the restaurant),” Shaloam said. “Instead, they moved to a building closer to the highway. We’ve even had different doctors look at coming here, and that was our ultimate goal—to have a doctor right next to the Pharmacy.”

That’s actually how the set up usedto be in the town when the well-known Dr. Connor Lyons practiced medicine in Surgoinsville.

“There’s nothing here in this town now,” Shaloam said. “HMG (Holston Medical Group) used to be here, and it was one of their busiest offices. But, when they moved to Kingsport, it left the town vacant. There are no healthcare professionals anywhere here, and our goal was to bring healthcare to the people of this town. When we bought the Pharmacy, that was the one thing we wanted to do.”

This has actually been a common problem since Dr. Lyons passed away in 1966. The Review found an old copy of the Kingsport Times Newspaper from May of 1967 titled, “Wanted: A Country Doctor, Modern Surgoinsville Clinic Stands Empty.” The Bryans also have a TIME magazine from 1969 with an article inside about Surgoinsville and titled, “The doctor won’t be in today, or tomorrow.”

The Bryans to plan to revisit that goal now that the clinic in the back of the Pharmacy is remodeled and ready to go.

For more information on the restaurant or to view their menu, check out their website at https://www.farmacygrill.com/ or call (423)-345-6009.