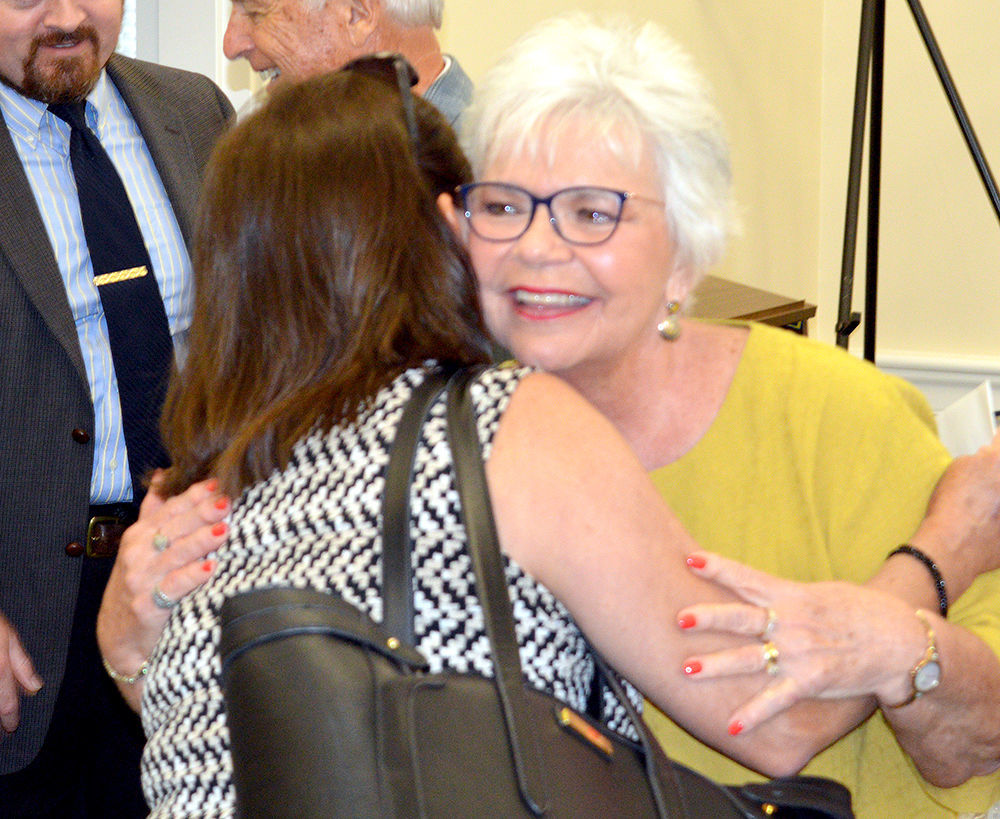 Retiring Hawkins Co. Clerk and Master Holly Jaynes was showered with praise, hugs, cards, and a cake last Thursday as friends, family, and members of the judicial community gathered to thank her for her years of service. 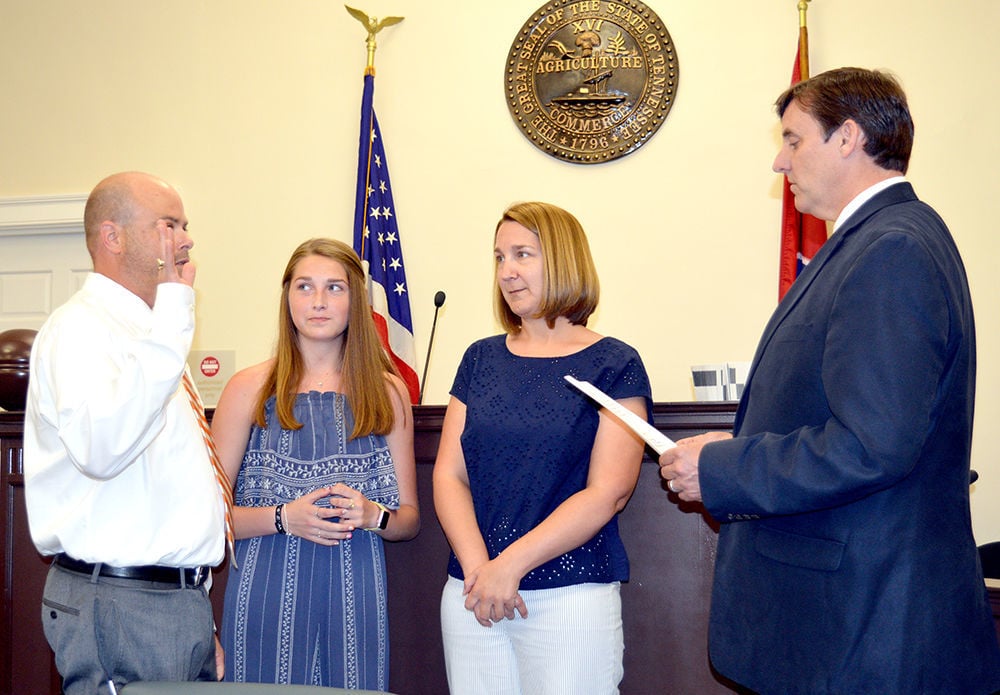 Brent Price, who will become Hawkins County’s new Clerk and Master, as of July 1, 2020, is sworn in by Chancellor Douglas Jenkins as his wife, Crystal Price, and daughter, Neyla, look on. 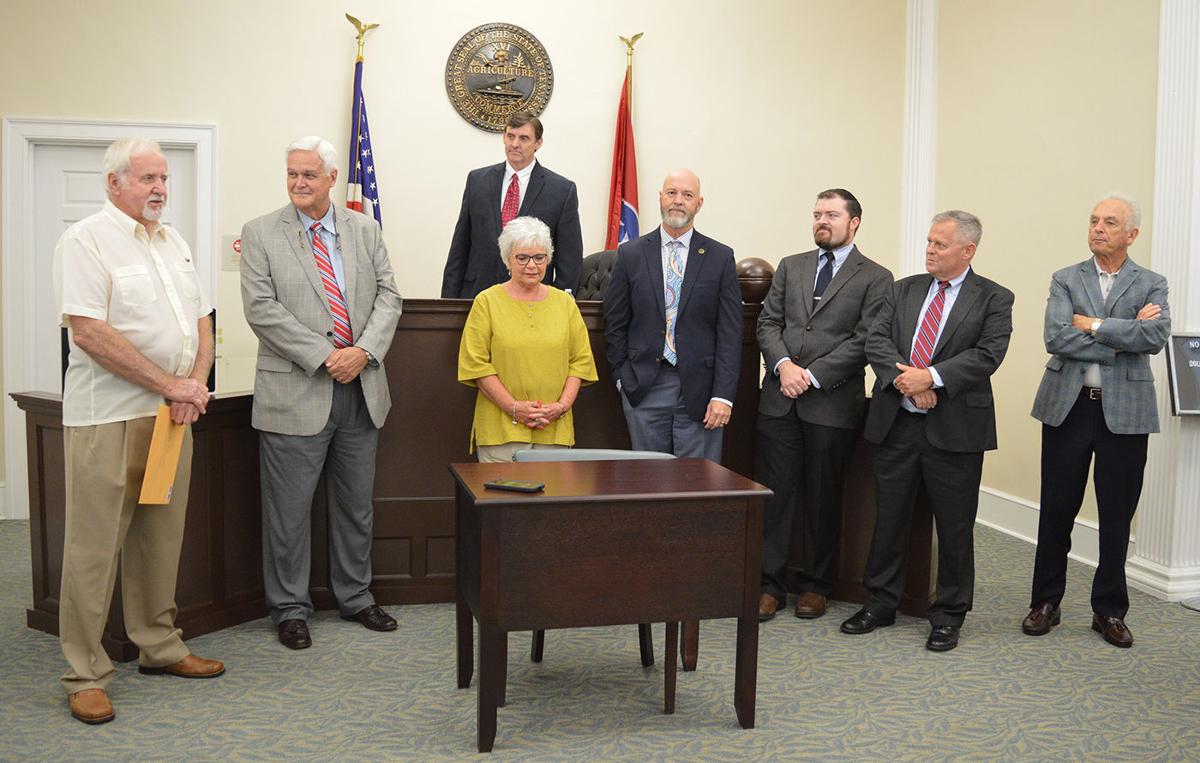 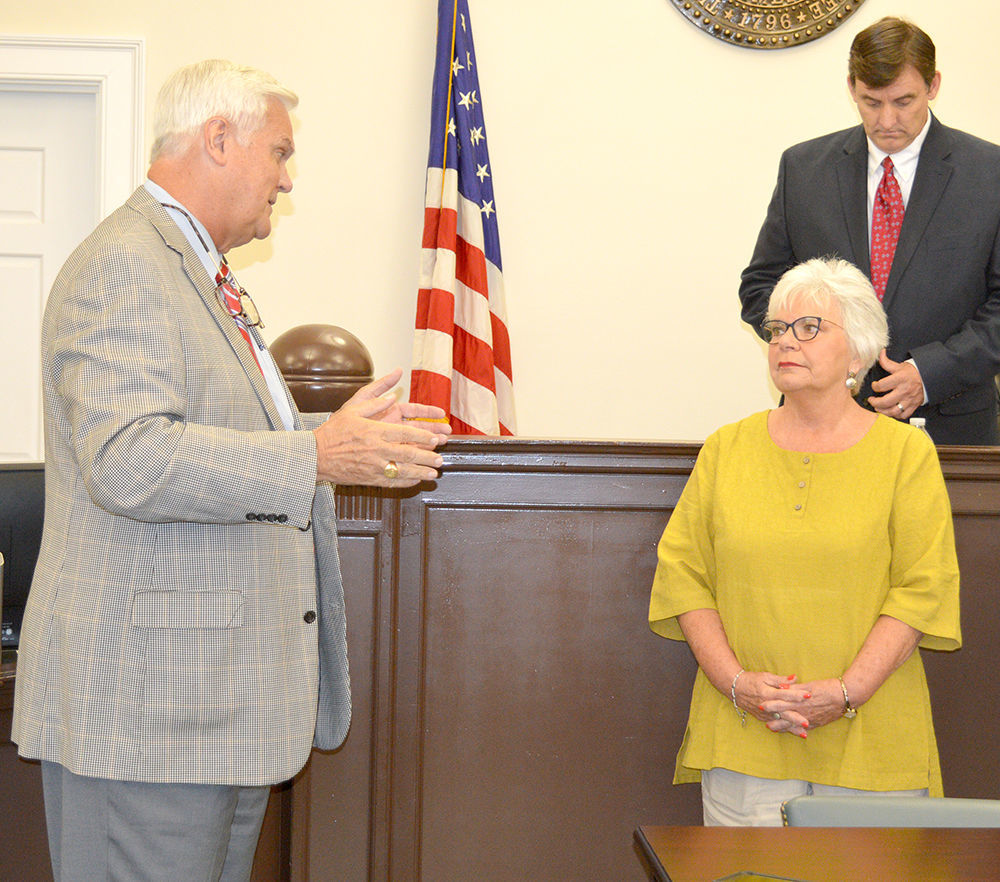 Former Hawkins Co. Chancellor and current member of the Tennessee Court of Appeals, Judge Thomas R. “Skip” Frierson thanked Jaynes for her “exemplary service to the court and so many people”. 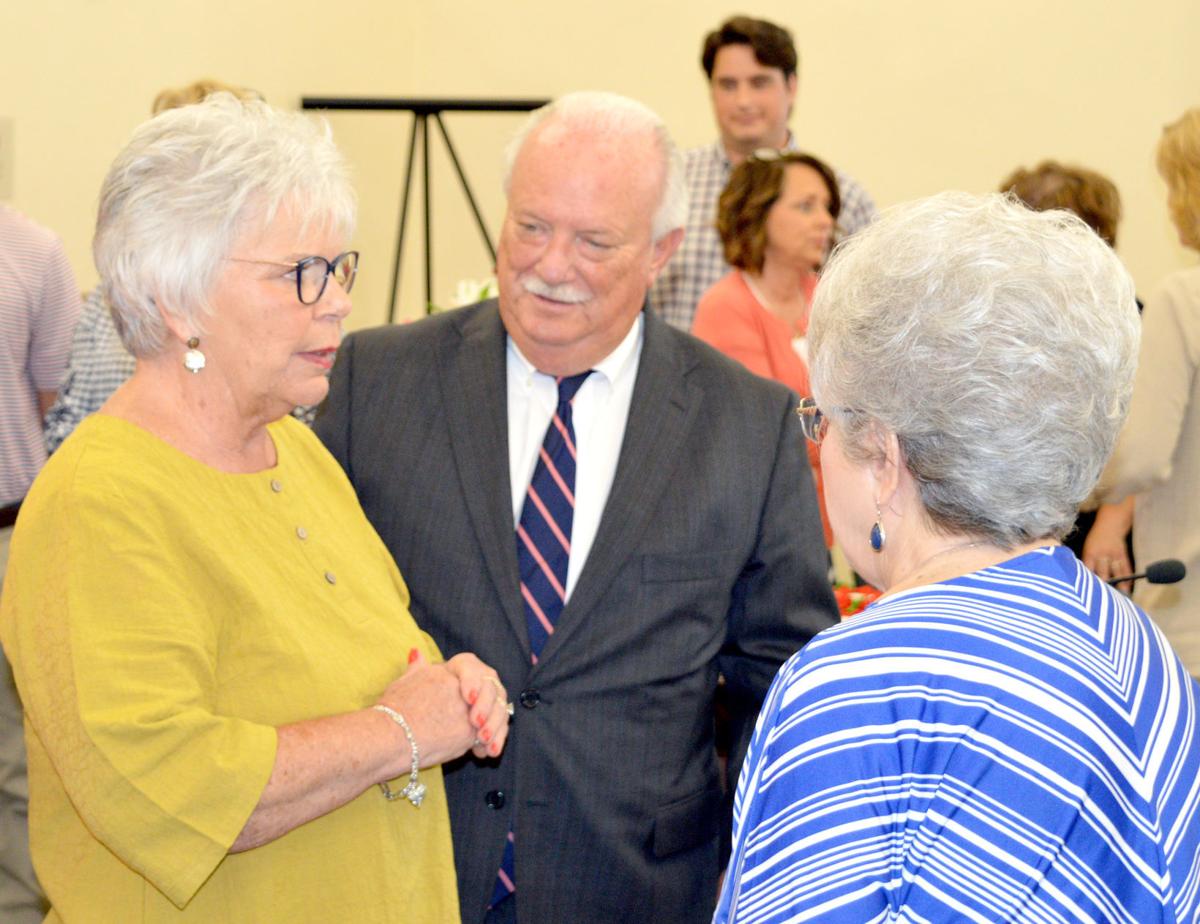 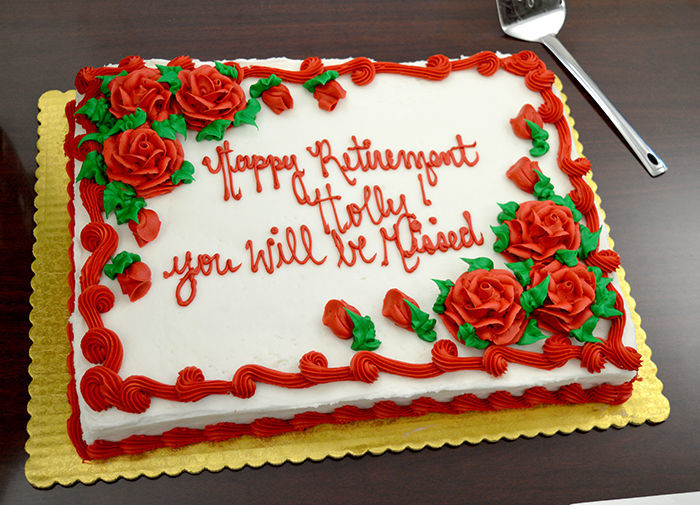 Retiring Hawkins Co. Clerk and Master Holly Jaynes was showered with praise, hugs, cards, and a cake last Thursday as friends, family, and members of the judicial community gathered to thank her for her years of service.

Brent Price, who will become Hawkins County’s new Clerk and Master, as of July 1, 2020, is sworn in by Chancellor Douglas Jenkins as his wife, Crystal Price, and daughter, Neyla, look on.

Former Hawkins Co. Chancellor and current member of the Tennessee Court of Appeals, Judge Thomas R. “Skip” Frierson thanked Jaynes for her “exemplary service to the court and so many people”.

ROGERSVILLE — Holly Jaynes will continue to serve as Hawkins County’s Clerk and Master for a few more days, until her retirement is effective at the end of the month, but on Thursday of last week, family members, friends, elected officials, and members of the local judicial community gathered in the Chancery Courtroom to shower the longtime public servant with praise for “a job well done” and to tell her successor that he would have “some big shoes to fill”.

More than 100 people gathered for Jaynes’ retirement ceremony on June 18, 2020, and to congratulate newly-appointed Clerk and Master Brent Price who was sworn in by Chancellor Douglas Jenkins.

Price’s term of office begins on July 1, 2020 but the ceremony was held early to accomodate schedules of judges, some of whom will be on vacation that week.

“Holly has done a great work for the county during her long tenure in various offices,” Jenkins said. “Hawkins County has been blessed with a long line of highly competent and skilled Clerk and Masters and she has been one of the best.”

Chancellor Jenkins also read aloud a copy of a Resolution that is being sponsored in Jaynes’ honor in the Tennessee General Assembly by Rep. Gary W. Hicks, Jr., and Sen. Frank Niceley.

“Holly, thank you for your exemplary service to the court and so many people,” he said. “Your commitment to excellence, your superb leadership, your dedication, your compassion for others, and your faithfulness. Thank you for serving lawyers, litigants, the courts, judges, and everyone who had occasion over the years to do business with the courts. We thank you.”

Jaynes’ “judicial family” will miss her, Judge Frierson said, “but we know that you have an incredible family at home, and we wish you the very best. We hope for you prosperity, good health, travels, and enjoying your family, whatever it is that you want to do. Thank you again, Holly, for all that you have done for all of us. Godspeed to you. You take care.”

Judge Thomas J. Wright drew laughs when he reflected on Chancellor Jenkins’ comment that her successor, Brent Price, would have “some big shoes to fill”.

“It’s not gonna happen, dude,” he said to Price. I’m sorry for you, but its like the guy who took over for Greeneville High School as coach after they had won several state championships. It’s just not going to happen, but good luck to you!”

“Don’t scare him off, Judge, before he even gets started!” Jenkins interjected.

“There’s just not a better clerk in the state of Tennessee than Holly,” Wright added.

Circuit Judge Alex Pearson agreed, and said he got to know Jaynes when he was working with the District Attorney General’s office.

“Holly always seemed very confident and seemed to know the information that I needed to get me pointed in the right direction and make things work as smooth as they could,” Pearson said.

Pearson said that as he travelled around the region handling cases in other districts, he came to appreciate Jaynes even more.

“We would go into these other areas and it was like nobody cared that we were there, we didn’t feel welcome,” he said. “Its never been that way here. Anytime I had need to visit her office, she had whatever I needed, the files or whatever, ready, and was so confident, so professional, and so friendly. And that’s what I’m going to miss the most, her friendship. Holly has been a blessing to this county for her service and I appreciate her.”

Not long after he began in that role in 2006, Dugger said, he was assigned a criminal jury trial that was transferred to Hawkins County from Hamblen County. That trial, he said, lasted for nine days.

“No complaint at all from Holly about that,” he said. “And a lot of times, when cases are transferred from another county, the clerk doesn’t want to have to deal with it because it isn’t their responsibility. No problem with Holly. Nine days we were in here. It was a brutal, long jury trial. The only problem was, the air conditioning wasn’t working in here and it was HOT. They had to go and buy fans for the jury.”

If there were a handbook on ‘how to be a clerk for the whole state of Tennessee, Dugger said, “Holly could write it”.

“I’ve dealt with different clerks everywhere and I’ve got great clerks now, I’m not saying anything about them, but Holly could set the rules and write it, she does it perfect, and everybody knows it,” he said. “The judges know that, the lawyers know that, and that’s why they’re here. We’re gonna miss you, Holly. I wrote this on your card and it is so true .. you have EARNED a good retirement.”

Retired Criminal Court Judge James E. Beckner, who served for 30 years in that role, including presiding over two of the most highly-publicized trials in Tennessee history — the Lililid murder cases in Greene County, and the Hawkins County case involving Scotty Trexler — added his own congratulations.

“I was fortunate enough to get a double-dose of Miss Holly,” he said. After retiring as a Criminal Court Judge, Beckner became a Chancery Judge. “I don’t know how many hours Holly and I spent on the phone with AOC (Administrative Office of Courts) working out cases, and what we were supposed to do. She taught me how to be a Chancellor pretty well!

Beckner said he could rightfully claim some of the credit for Jaynes becoming Clerk and Master.

“When Skip (Frierson) was looking for somebody, he sent me to Holly, we had a conversation, and I came back and said that was a ‘no brainer’, so here we are,” he said.

Beckner said people have often accused him, good-naturedly, of being “super organized”.

“I’ll have to say, Holly beats me. She’s more organized than I am!” he said. “The thing that I most admire about her is that she treated the people who came into court the way they should be treated. You have some rude people in the office, as you all know, and Holly was always professional in everything that she did. She is one of a kind.”

Juvenile Court Judge Daniel G. Boyd joked that when he first became a lawyer and showed up to file a paper with the court, Jaynes told him flatly, “that’s not how you do it”.

“I said, well, this is what Dad (attorney Larry Boyd) said to do,” he said, drawing a round of laughs, “and Holly said that I should listen to my dad, ‘but then do what I tell you to do!’”

Boyd said he knew that was said in jest, because, deep down, every lawyer in town knew that “Holly just wanted to steer us in the right direction”.

Chancellor Jenkins said that he has been practicing law since October of 1995, and practiced in both Circuit and Chancery courts.

“Then-Chancellor Frierson was very benevolent to me in Chancery Court, and in Circuit Court, Holly brought me along, and first of all, taught me to be good to the clerk.” he said. “That is rule number one! She has helped me so much along the way, and I appreciate her so much.”

As Chancellor, Jenkins joked, one of the “interesting factors” about his own personality is that he is generally late for appointments.

Jenkins joked that his chronic tardiness may have unintentionally “driven Holly into retirement”.

“She always gave us good advice, and was always in our courtrooms to make sure that things were done right,” he added. “Holly, thank you for everything. We got you a cake and invited all these people to be here, but I’m going to figure out something else that we can do for you to show our appreciation.”

Jaynes’ career began in 1970 when she became Deputy Clerk for the Hawkins Co. General Sessions Court. Since that time, Jenkins said, she also served the elected Circuit Court Clerk for several terms, as Administrative Assistant to Heiskell H. Winstead in his private law practice and during his tenure as District Attorney General for the Third Judicial Circuit, and as Administrator of Child Support Enforcement for the Office of District Attorney General.

She was appointed Clerk and Master in 2010.

A graduate of Rogersville High School, Jaynes completed a secretarial program at Bristol Commercial College and holds a Certified Public Administrator Certificate from the University of Tennessee.

She is a past president of the East Tennessee Court Clerks Association, and in 1998-99 was named its Outstanding Clerk of the Year.

Jaynes and her husband of 54 years, Johnny Jaynes, are the parents of two daughters, Renee (Ted) Trent and Andrea (Steve) Harbin; and the grandparents of Tanner, Teagan, Tatum, Carolina and Ella.

Jaynes thanked everyone for coming, wished her successor all the best during his own tenure as Clerk and Master, and said that while she will miss all of the lawyers and judicial personnel — “most of whom I helped to raise!” — she is looking forward to retirement and spending more time with her family.

“You lawyers are all of my children, my court family,” she said. “I have enjoyed what I have done all these years, I have loved it, and I have loved all of you.”

PRICE NAMED NEW CLERK AND MASTERBrent Price, a native of Hawkins County, is the son of the late Danny Roy and Carol Livesay Price.

A resident of Rogersville, he and his wife, Crystal, are the parents of a daughter, Neyla.

He previously worked at Civis Bank for 23 years where he most recently served as Vice President and Branch Manager at the Church Hill office. As a commercial and mortgage lender, Jenkins said, Price has extensive experience in real estate, financial matters, and an understanding of state and federal regulations.

A graduate of Cherokee High School, Price received a Bachelor’s Degree in Finance in 1996 from Tennessee Technological University in Cookeville. He is also a graduate of the Advanced School of Commercial Lending at Southern Methodist University, in Dallas, TX, as well as the Graduate School of Banking at Louisiana State University at Baton Rouge.

“Brent’s experience, training and education will be great assets to the county in serving as Clerk and Master,” Jenkins said of Price. “I have known him for years and have great faith in his honesty and integrity, and I believe he will make the people of Hawkins County a great Clerk and Master.”