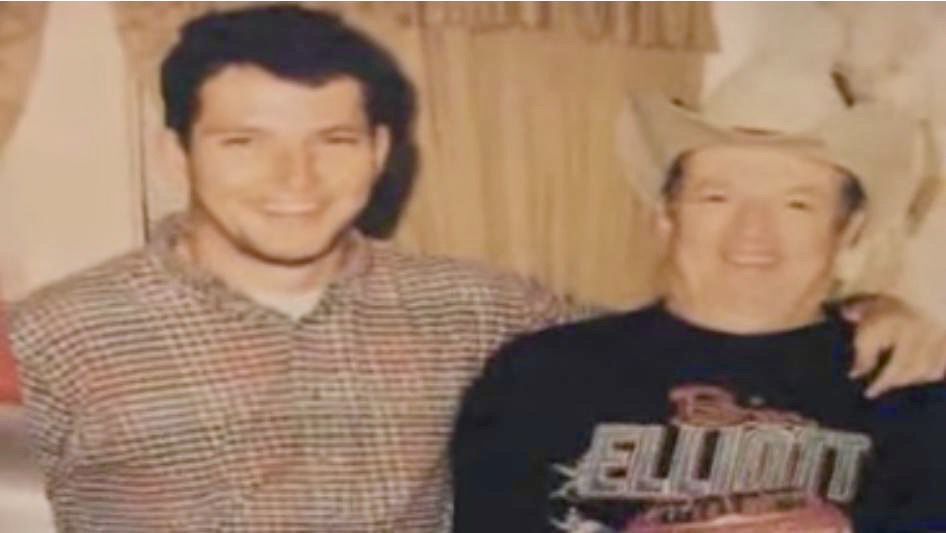 United Flight 93 hero Mark Bingham, left, and this father Gerald Bingham, right. Gerald lived in Church Hill from 2007-13 and was interviewed by Jeff Bobo five times during that time period. 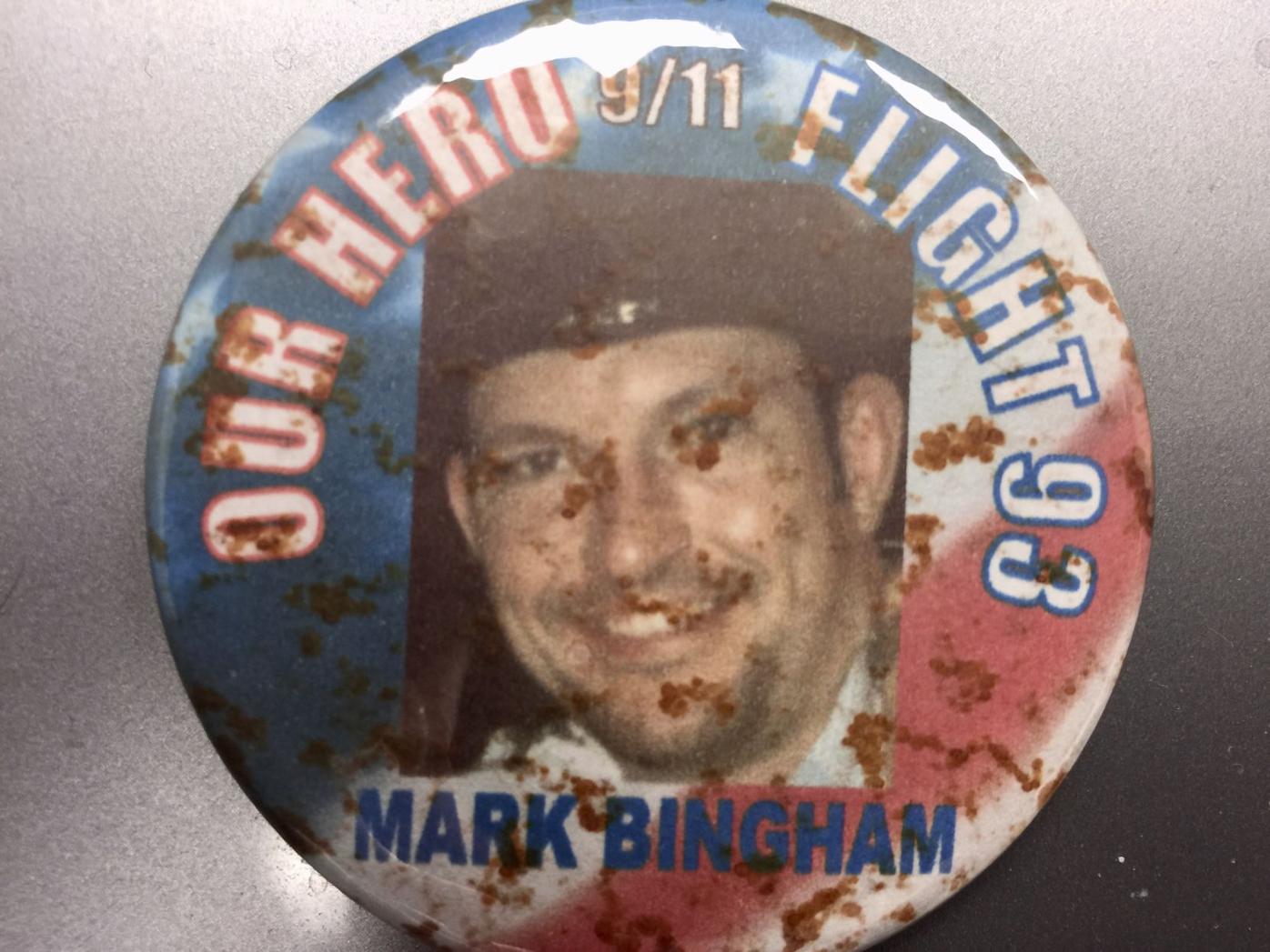 Gerald Bingham gave Jeff Bobo this pin during their first meeting in 2007. It’s little grimy after 14 years, but Bobo has kept it at his work desk all these years as a reminder that the people he writes about, especially under tragic circumstances, are human beings who have friends and loved ones. 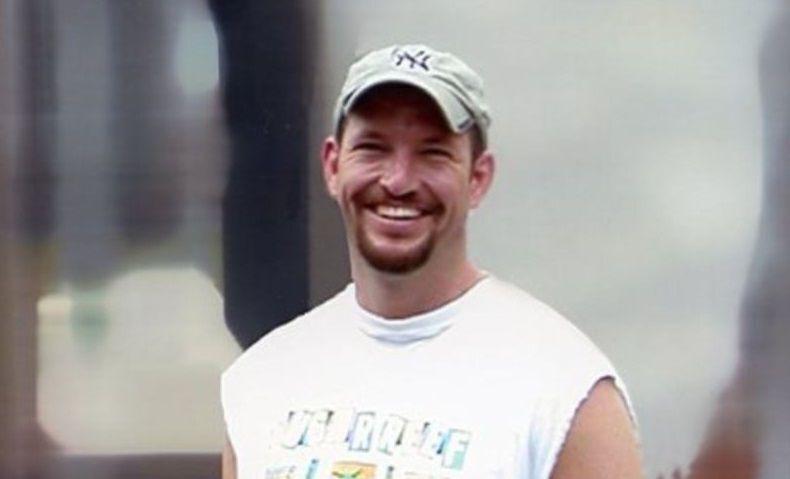 Mark Bingham, 31, was one of 37 passengers on United Flight 93 who, along with four crew members, were killed in a crash after the plane was hijacked by terrorists during the Sept. 11 attacks.

United Flight 93 hero Mark Bingham, left, and this father Gerald Bingham, right. Gerald lived in Church Hill from 2007-13 and was interviewed by Jeff Bobo five times during that time period.

Gerald Bingham gave Jeff Bobo this pin during their first meeting in 2007. It’s little grimy after 14 years, but Bobo has kept it at his work desk all these years as a reminder that the people he writes about, especially under tragic circumstances, are human beings who have friends and loved ones.

Mark Bingham, 31, was one of 37 passengers on United Flight 93 who, along with four crew members, were killed in a crash after the plane was hijacked by terrorists during the Sept. 11 attacks.

I remember waking up the morning of Sept. 11, 2001, turning on the TV, and seeing that the first tower was burning and people were trying to figure out what happened.

While I was getting ready for work the second tower was hit, and it was obvious we were under attack. I knew I had to get to work quick because it would be all hands on deck at the Kingsport Times News newsroom looking for local angles to this tragedy.

At some point, possibly the next day, I found a person from this area who was working in a high-rise within view of the towers during the attack. This person described her observations for me, which became a newspaper story.

My feelings about the attack were anger and frustration for all this senseless death and destruction. But, as a reporter you have to put your feelings and emotions on the back burner and tell the story objectively.

To be honest, the attacks didn’t affect my life much beyond that. The anger we all shared is still there, but I was pretty quick to get back to business, and Hawkins County always had plenty of news to keep my mind occupied.

These days there are horrific tragedies in the news on almost a daily basis. One horrific event after the other. It’s numbing.

But, the tragedy of Sept. 11 didn’t really hit me hard until years later when it was staring me in the face, and shedding tears.

Talking to a dad about the death of his son

In 2007 I met Gerald Bingham, who had recently moved with his wife Karen from Florida to Church Hill. He’d recently visited friends who had a place on Cherokee Lake, decided he liked it here, and relocated.

Bingham’s son Mark Bingham was one of the heroes of United Flight 93 which crashed in Shanksville, Pa. after being hijacked by terrorists on Sept. 11.

Mark, who was 31 at the time, was among the 37 passengers and four crew members who perished in the attack.

He was a public relations executive who founded his own company and had offices in New York City and San Francisco.

He was supposed to fly out the day before but missed his flight after attending a party.

I interviewed Gerald five times: Shortly after he moved to Church Hill in 2007 to introduce him to the community; on the 9th anniversary of the attacks as he was helping design the United Flight 93 memorial in Shanksville; to get his thoughts after Osama Bin Laden was killed; to get his reaction to the plans of a proposed Mosque to be constructed in New York City near Ground Zero; and finally prior to his leaving for the United Flight 93 memorial to be dedicated on Sept. 11, 2011.

There’s a video attached to the online version of this article from our 2007 interview. Notice the several breaks in the conversation.

It’s not easy to keep a dry eye when you’re talking to a dad about the death of his son. Gerald was able to keep it together for a while, but eventually his eyes would water up and he’d lose it.

Then my eyes would water up, and we’d have to turn off the recorder and get it together before we could continue the interview.

”There’s a guy on board with a bomb”

He and Karen were living in Florida on Sept. 11, 2001, and Gerald recalled for me the events of that day.

“I was watching TV like everybody was that morning, and saw the plane crash into the tower, and then the other tower,” Gerald told me during our first meeting in 2007. “Then you knew we were in trouble. I had been trying to get hold of him — his cell phone — or trying to get his office. He’d just opened a new office (in New York City), and I wanted to get hold of him to find out where his new office was, because I couldn’t remember where it was in comparison to where the towers were going down.”

Gerald: “I was trying to get hold of him while all this was going on and couldn’t get any information, and didn’t find out anything until his uncle in California called. My ex-wife was there — his mom — and that’s when I found out. They said he had talked to my ex-wife Alice on the phone (shortly before the crash) and he said that he loved us and that they (the passengers) were going to do something. Alice thought he was kidding. He said, ‘There’s a guy on board with a bomb’, and he said ‘we’re going to do something about it’. She thought he was kidding at first, but there was a guy on board with a bomb.”

When the westbound plane en route to California turned back east, the passengers knew they had to do something. It’s suspected that the terrorists’ intended target was the White House.

Gerald: “There was a pilot on board who was a passenger, and they thought if they could take over the hijackers, they could fly the plane. I think if they’d had another 2-5 minutes they’d have had the plane.”

”My son was just a good time guy”

Mark Bingham was an athlete who traveled the world playing rugby. During our 2007 meeting Gerald described his son as adventurous.

“He always traveled,” Gerald said. “He played rugby in Australia, played rugby in New Zealand — played all over. He was pretty tough. He enjoyed the contact. God bless him, a couple of years when he was in his own business he had a chance to travel all over. He went to Israel, and he ran with the bulls in Pamplona, Spain. He ran twice because he didn’t get cut the first time. He had to go back and run again the next day to get a little gash on him. He had to have a souvenir.”

Gerald was part of the second jury that selected the final memorial design. The first jury of Flight 93 family members had narrowed the list of potential designs from 1,500 to five.

He later told me, “The sacred area where the plane went down is still the same. We haven’t changed that. That’ll always be the same.”

In 2013 Gerald and Karen Bingham moved to Florida and I lost track of them.

There’s a photo of Gerald online attending the 9/11 memorial service in Shanksville in 2018, but I haven’t been able to track him down since. I hope he’s doing OK.

“Every year we go to Pennsylvania at least make three times a year,” Gerald told me in 2007. “(Holding back tears) You have to go forward. You realize that. My son was just a good time guy. He always enjoyed life. You’ve got to keep that in the back of your mind too. It was about a week before the planes started flying again, so we finally got a flight to go to Shanksville. The next year we decided to build a memoir, and that’s what we’ve been doing.”

Gerald: “People visit the site, and they leave things. They leave pictures and flowers, and trinkets, and they leave hats and T-shirts. Since Sept. 12 this started. They record all these, and all these will be in the memorial. (Crying) The people in Pennsylvania take care of it. They do everything for us. They’ve got volunteers who watch over the place. I think you get such a feeling when you go up there — what’s hard to explain is people feel like they’ve got to leave something. They feel like they’ve got to give back, or do something.”

For 14 years that pin was stuck to the cloth cubical wall where I sat in the Kingsport Times News newsroom.

I looked at it every day. Somehow it got crud on the inside of it, and I can’t clean it, but I don’t care.

I’ll keep that pin at my desk until the day I retire. It’s a reminder that the people I write about, especially under tragic circumstances, are human beings with family and friends who love them, and miss them.

Gerald Bingham taught me of that in 2007, and it’s a lesson I haven’t forgotten.