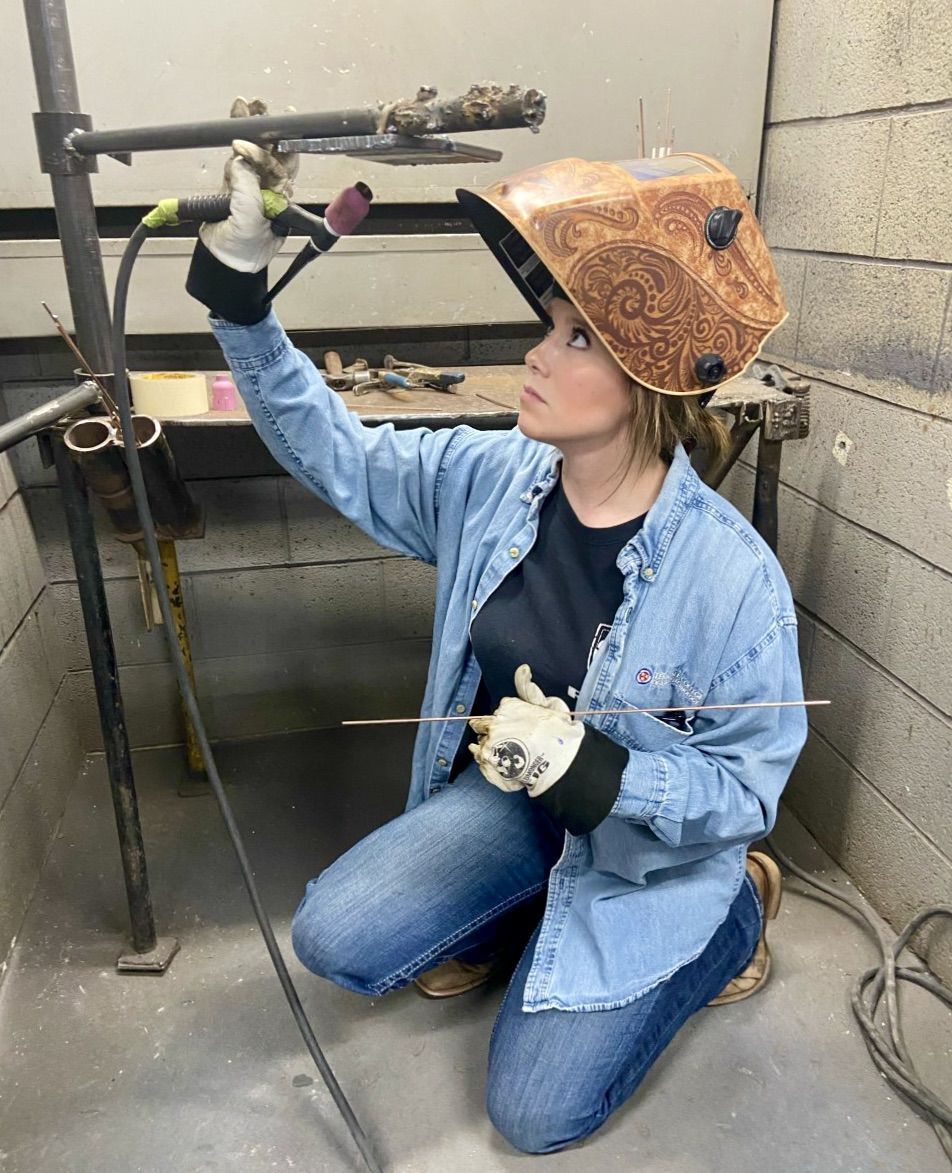 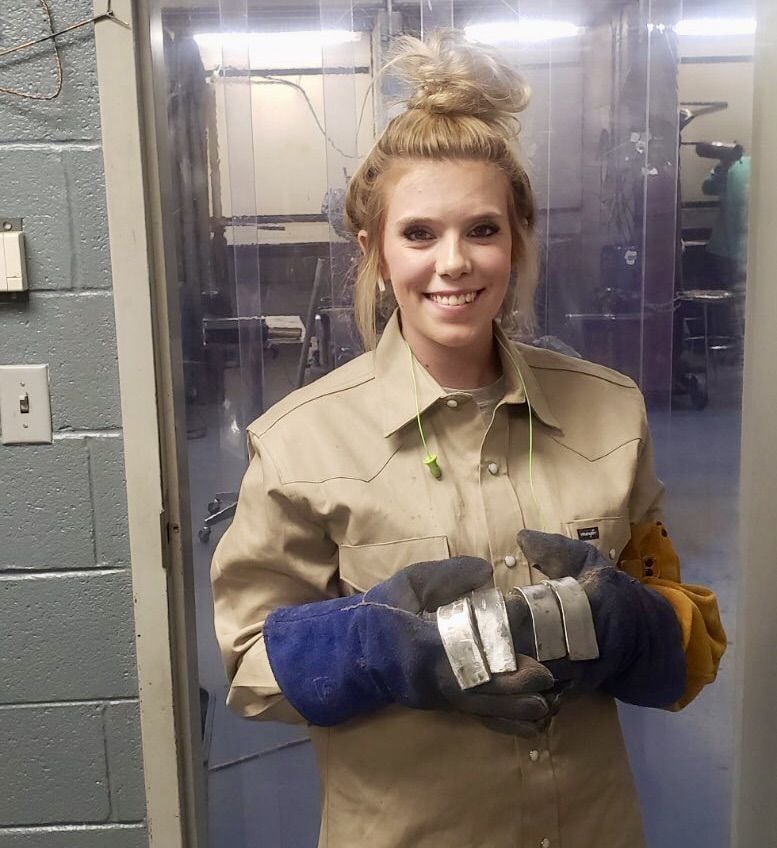 Cortney Nichols from the Clinch School Class of 2021, will soon complete her training at the Hawkins County TCAT campus. 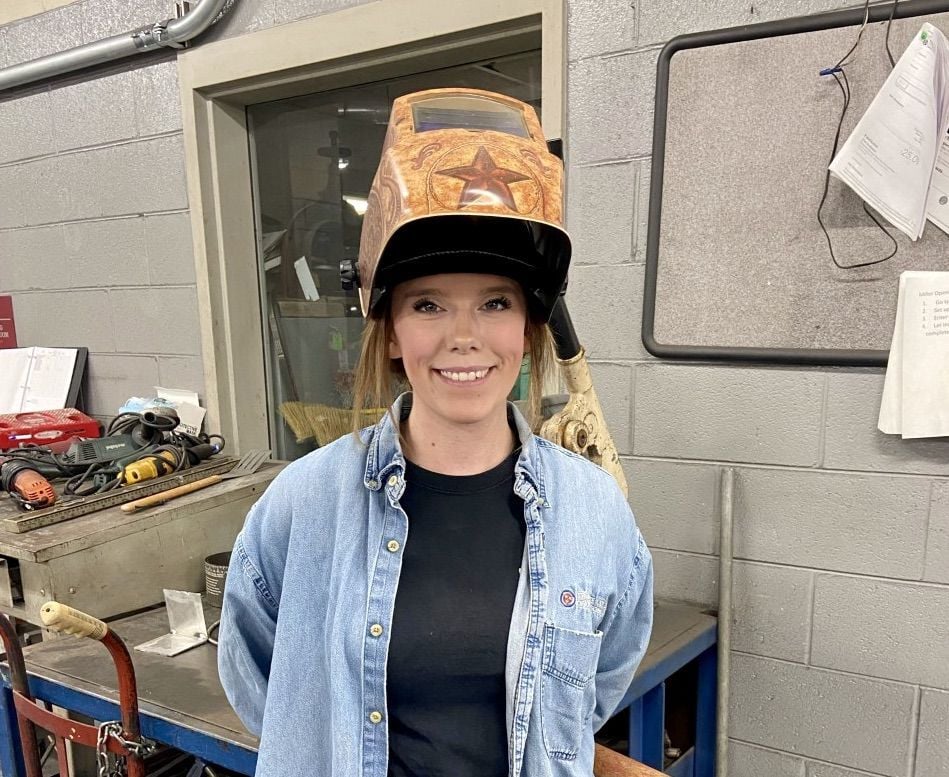 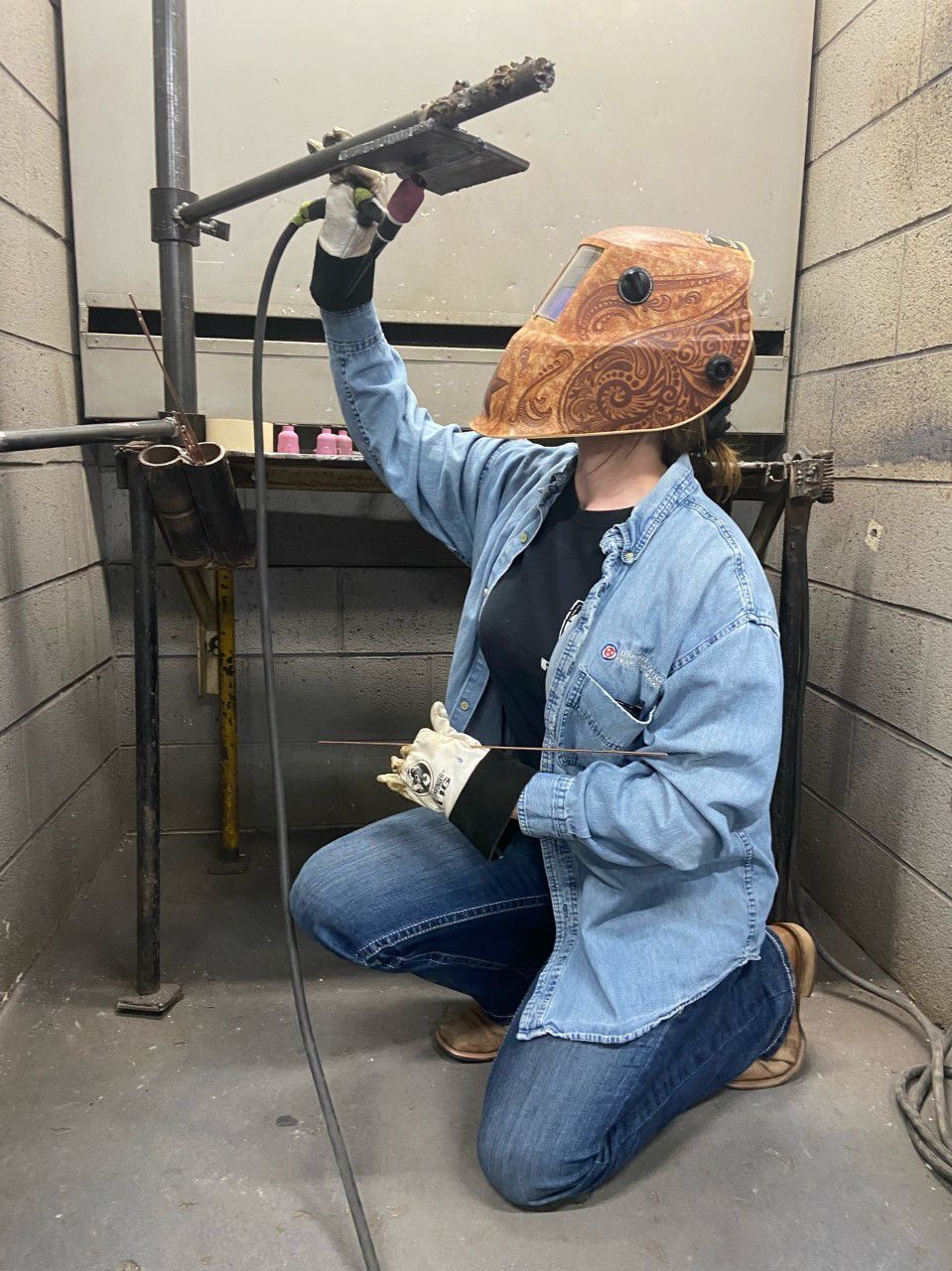 Cortney Nichols from the Clinch School Class of 2021, will soon complete her training at the Hawkins County TCAT campus.

Cortney Nichols, a 2021 graduate of Clinch High School, is fast approaching the completion of her welding certification at TCAT Morristown Hawkins County Branch.

Cortney struck her first welding arc last year as a high school senior taking a dual enrollment welding course at TCAT. In an industry sector, and a TCAT class that is predominantly made up of males, Cortney is classified as a “Non-Traditional Student” in education lingo.

While she was the only female dual enrollment welding student last year, that is not the only thing that stood out to Cortney’s instructors as being non-traditional about her.

According to Charles Johnson, Campus Coordinator, and Woody Hechmer, welding instructor, the rate at which she masters skills is faster than they typically see.

That, coupled with the time she accrued while she was in high school is why Cortney will finish the program that typically takes about a year in just ten months. It is also why Johnson asked Cortney to step into a student worker position and tutor current dual enrollment students who need additional instruction in the early months of their training.

Cortney came to welding as a senior in high school having never run a single bead of weld. According to her, she had always envisioned becoming an x-ray technician or working in some other health care setting.

However, during her junior year at Clinch she took some courses that helped her realize she really wanted to do something different. When asked what led her to welding she said, “I knew if I learned to weld I could find a job anywhere I wanted, and that it would be a job that pays well. I also like the idea of traveling with work, and there is plenty of opportunity to do that as a certified welder.” Charles Johnson recalled the words of former welding instructor Jerry Sullivan when he added, “Welding is one career in which you can pack up your bag of tools and go to work anywhere you would like.”

When asked if it was intimidating walking into welding class for the first time as the only female in the group Cortney said, “It was at first, but not anymore.

I just told myself, ‘I know I can do this’ and got started.” As to being in a welding class having never had any formal training, she said that did not bother her at all. Johnson said Cortney is just the latest example of a student with no prior experience who has mastered the skills and has a bright future ahead. “Hunter Lawson is a recent graduate of Clinch, he didn’t have any training before coming here either, and he is now working in a very good position thanks to his skills.”

Nichols said she really enjoys working with dual enrollment students and helping them advance their skills. She went on to say that she now passes on the same advice her mother gave her when it came to learning a skilled trade; “I tell the dual enrollment students I tutor that learning to weld is about quality over quantity — you have to take pride in the work you do.”

Johnson added, “I really enjoy seeing our students take full advantage of their skills and the opportunities they have in front of them and Cortney is doing just that.” He went on to say, “I’m really excited for Cortney and very interested to see where she goes to work” to which Cortney replied, “Me too!”

Each semester dozens of students from Hawkins County Schools enroll in dual enrollment courses at TCAT and Walters State Community College. Students have the opportunity to jump start their post-secondary education and training to get ahead of the curve in terms of entering the workforce.

Cortney is one of many graduates of last year who will enter the workforce sooner than usual thanks to dual enrollment partnerships with our partnering institutions.

We chose to highlight Cortney for that reason, but also because she is considered a “Non-Traditional Student” in a welding program. I want to draw attention to this because although she is classified as non-traditional in this field, she is and will continue to be just as successful as any other student.

We have spent a lot of time over the past several weeks in these columns discussing what Career and Technical Education (CTE) is and what we are trying to accomplish.

Last time we discussed a few common myths surrounding whether or not students need to go to college and the reality that nearly everyone will have some form of education or training following high school, just that it will vary from one industry to another.

This week I wanted to spotlight the success Cortney has had for a couple of reasons. First, we want to celebrate the success of our students and recognize outstanding performance and aptitude.

Secondly, though, I wanted to share her experience so we can hopefully begin to erase the notion of “Non-Traditional Students.” Now, are we ever likely to live in a world where each job classification is equally populated with males and females? Not likely. However, we do need to live in a world where we encourage students to seek out any career they feel drawn to, even if they would be classified as a non-traditional student.

The simple fact is, learning a skill or profession and earning a living with that knowledge has nothing to do with gender. Some of the best welders in the workforce are females. Likewise, plenty of males earn a living as nurses or teachers, but they would be classified as non-traditional students in either situation.

CTE has evolved tremendously over the last ten years, a pace that can actually seem rapid compared to some areas of education, but we are not finished with that work.

Each year countless students graduate high school having never truly considered a career in a field predominantly occupied by the opposite sex. Why? We have to make it part of our focus to tear down that notion and help all of our students, female and male, understand that their gender should not be a deciding factor in the career they pursue.

We are making progress toward that end, not just in Hawkins County, but all over the country. However, we need to remain focused and stay engaged in those efforts.