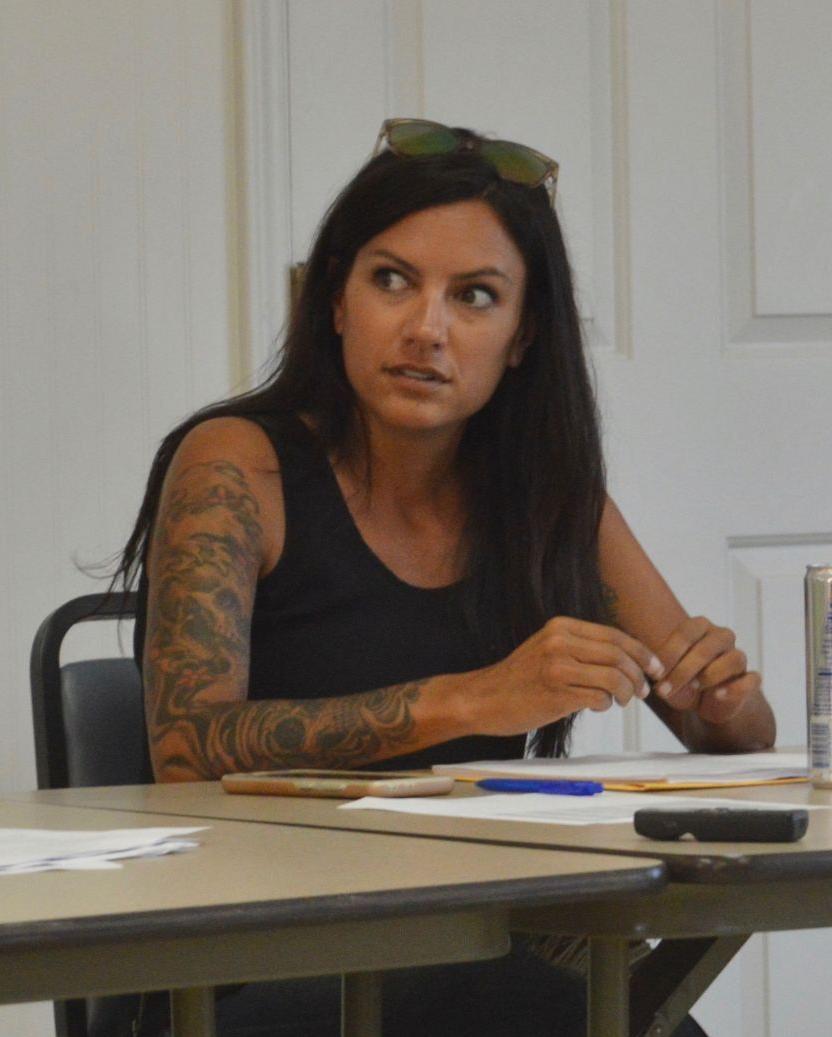 Alderman Mindy Fleishour told the Review that she has been “blackmailed, harassed and stalked” by a citizen who filed an ethics complaint against her after threatening to “expose” information about her for several weeks. 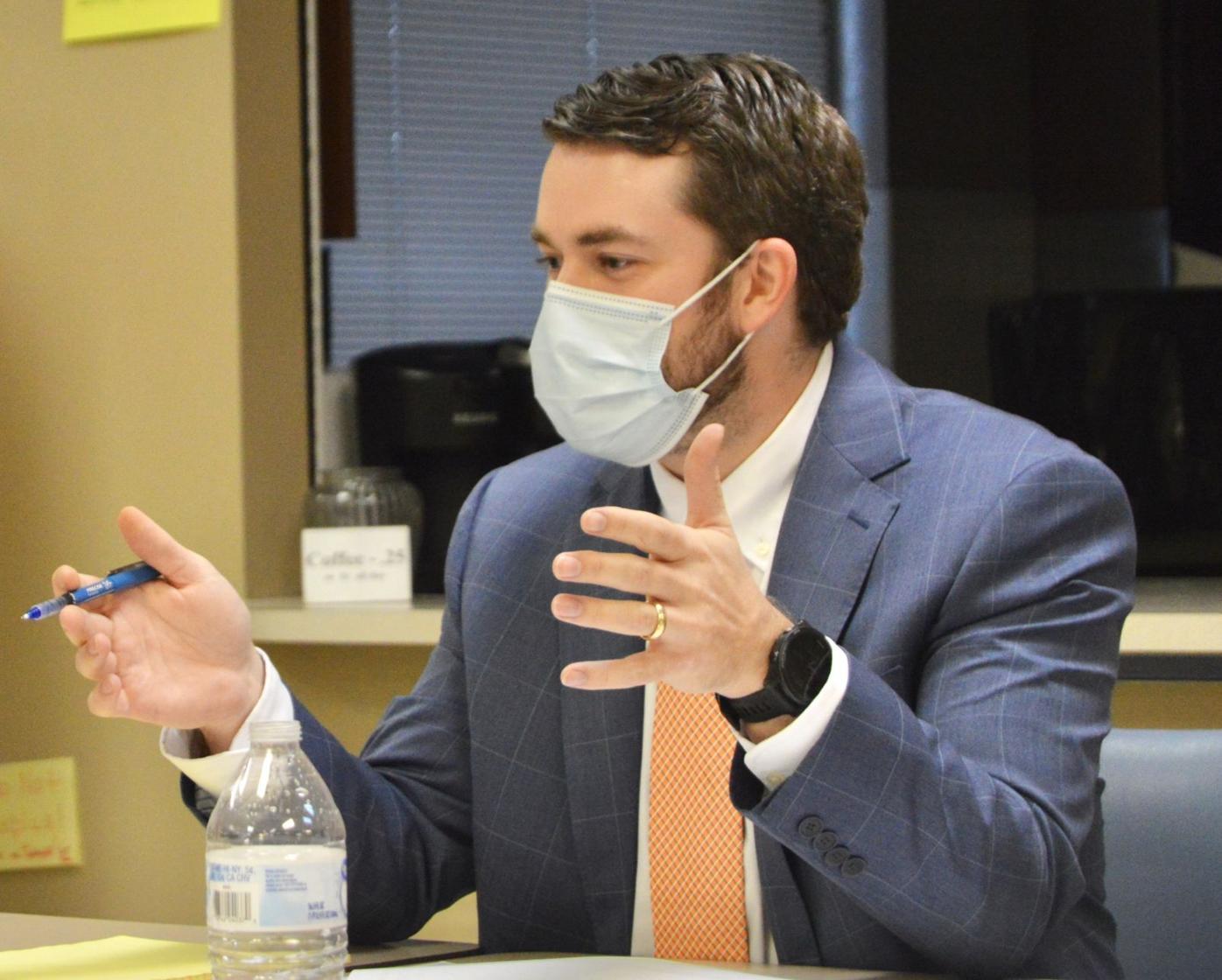 “I don’t think that these things (in the complaint) are properly adjudicated by the code of ethics,” Mount Carmel City Attorney John Pevy told the board of Griffith’s ethics complaints. 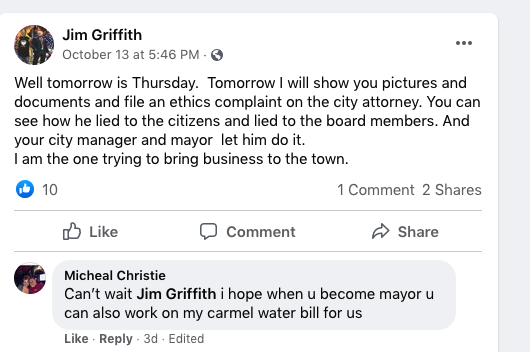 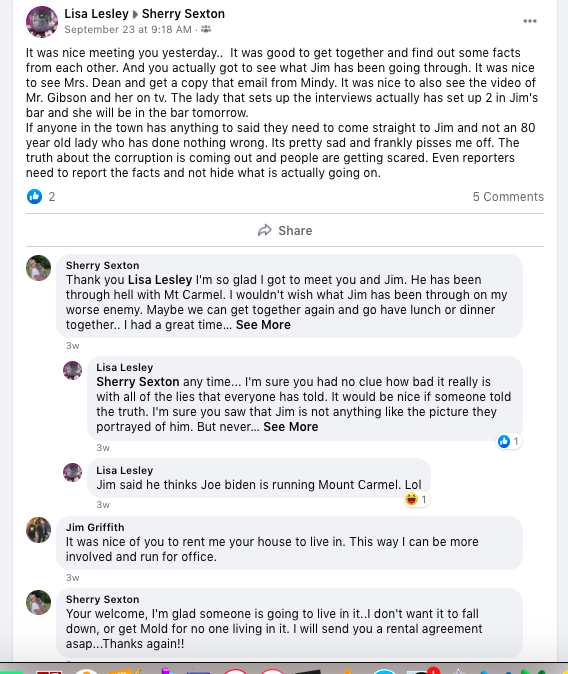 Alderman Mindy Fleishour told the Review that she has been “blackmailed, harassed and stalked” by a citizen who filed an ethics complaint against her after threatening to “expose” information about her for several weeks.

“I don’t think that these things (in the complaint) are properly adjudicated by the code of ethics,” Mount Carmel City Attorney John Pevy told the board of Griffith’s ethics complaints.

“They are trying to blackmail me to where I resign, and they are constantly harassing me,” Mount Carmel Alderman Mindy Fleishour told the Review. “It’s just extremely hard to go through…”

Fleishour is the subject of one of several ethics complaints filed local businessman Jim Griffith between Oct. 14 and 15. These complaints were filed after Griffith posted numerous times on both his personal social media platform as well as that of the Review that he had “documents he would soon be releasing.”

Screen shots of these social media claims can be found in the online version of this article.

One of Griffith’s ethics complaints alleges that Fleishour posted videos of herself performing sexual acts on a pornographic website several years ago and “talked nasty things to an elderly” citizen via email recently. The complaint includes email correspondence between Fleishour and an unnamed “elderly lady” as well as a screenshot of a profile from a pornographic website Griffith alleges belongs to Fleishour.

However, Mount Carmel City Attorney John Pevy told the Board of Mayor and Aldermen at the Oct. 14 workshop that these allegations “do not violate our code of ethics.”

“I don’t think that these things (in the complaint) are properly adjudicated by the code of ethics,” Pevy added.

In response, Alderman John Gibson made a motion to add these ethics complaints to the agenda for the Oct. 28 full meeting to vote on their credibility.

Pevy noted that investigating the numerous complaints from Griffith as well as the ethics complaint filed by citizen Brenda Parker last month against City Manager Mike Housewright would be extremely expensive. Should the board decide that the complaints are without merit and vote in favor of dismissing them, they would not have to pay an attorney to investigate them.

However, Fleishour told the Review that Griffith’s public allegations against her have already caused her much emotional trauma.

“I have been harassed for months”

“I have been harassed for months and months,” Fleishour told the Review. “I don’t know this person (Griffith) at all. So to be a target…? I am being harassed and literally stalked by these people. My attorney even told me this is the same mindset a rapist employs--trying to bully their victim into humiliation.”

She said that, around three months ago, she began to hear from city employees that Griffith was telling people in the community that Fleishour allegedly had a profile on a pornographic site in the past.

“Once I caught wind that they were posting things, I spoke to an attorney about it,” Fleishour told the Review. “He told me, ‘if this is the only thing they have against you, just own it and move on. Once they know that you know, it should die down.’ I don’t even know how (Griffith) got this information because it’s not associated with my legal name.”

Fleishour sent an email to Griffith and others who were spreading this information.

“What I find completely insane is that people would try and take something that I did, which is legal, eight years ago and try to define me as a person now--that they would stoop so low to try and ruin my good name,” Fleishour wrote in the email correspondence included in the complaint. “It’s old, I’ve grown as a person, I was young… And all of this for what? A seat on a board in a city with the worst reputation in the state? I will not be resigning from my seat like the hope with all this has to be.”

However, even when she “owned” her actions in the past, Griffith and others did not stop spreading the information. In fact, Fleishour said that the situation got worse.

“They want to humiliate me until I resign”

“I think the whole goal of this was to humiliate me enough to where I would resign my seat from the board and they could put Jim Griffith in my position,” Fleishour said when asked if she knew why Griffith had targeted her.

Though no public campaign announcements have been made, Griffith has repeatedly posted on his social media profiles that he intends to “run for office” in Mount Carmel.

Griffith alleged in his complaint that Fleishour “talked nasty things” to an elderly lady via email, and that Fleishour wrote, “(F) off” to the elderly lady. Fleishour’s email also allegedly stated, “I’m not ashamed of anything from my past..I never knew you were a closet lesbian. If you wanted old pictures of me, I would’ve given you some.”

Fleishour told the Review, “I responded negatively, and my email was highly inappropriate, but you can only push someone so far before they have just had enough.”

She noted that this email response was sent after receiving numerous messages from the woman threatening to expose Fleishour’s past adult website to the public.

“The email that she sent to me was highly degrading,” she said. “They sit here and tell me this is all my fault and I should have kept myself out of the public eye. It’s pushing the ‘victim’ mentality — blaming me for something they’re choosing to hold over my head.”

She added, “It has nothing to do with today or who I am. It didn’t define me as a person then and it doesn’t now. The sad part about it is that they want everything good that I have done for this community to be overshadowed by the one mistake I made. But what they don’t understand is that I’m not going to resign. I’ve not committed a crime, so I can’t be forced to resign. So, all this for what?”

Worried for her safety

Fleishour told the Review that, after this information began to spread, she also began to worry about her safety.

“It’s definitely something that has played on my mind,” she said. “It’s sad because we live in a culture where women are shamed all the time for being confident in themselves or their bodies. We shame women with rape and with everything — it seems it’s always the woman’s fault.”

She added, “I am the kind of person that my name means everything to me. When people hear your name, you want them to think good things about you. They are trying to create an atmosphere where, when people hear my name, they think about something that doesn’t even pertain to current-day life.”

Instead, Fleishour explained that she wants to highlight the positive work she has done for the town.

“Hosting the fall festival was one of my biggest accomplishments on the board,” she said. “I fought for the funding for it, and we were able to pull it off with only four months of planning. I also fought to get the Senior Center’s contribution raised and voted in favor of donating money to the elementary school’s drop off and pickup system.”

She also serves Mount Carmel on the Joint Parks and Recreation board alongside representatives from Church Hill and Surgoinsville. She also coaches in the recreation leagues. Prior to serving as Alderman, she also organized softball tournaments for area youth two summers in a row, and she is a Tennessee Chapter Leader for the National Free Mom Hugs Association, which brings awareness and support to the LGBTQ community.

“I fight for my community every day,” Fleishour said. “These people who are coming after me, if they were in need, I would still fight for them. People just need to do better, be better, and show more compassion.”

Pevy told the board at their Oct. 14 workshop that these allegations are also “not based in fact.”

During the case hearing on Oct. 23, 2020, the town was dismissed from the lawsuit and was found at no fault. The lawsuit itself was dismissed with prejudice, which means that it cannot be filed again in its current state.

Griffith filed two additional ethics complaints on Oct. 15. As of Oct. 19, the board planned to vote on the credibility of Griffith’s complaints at their Oct. 28 full meeting. The Weekend edition of the Review will feature additional stories on these complaints.