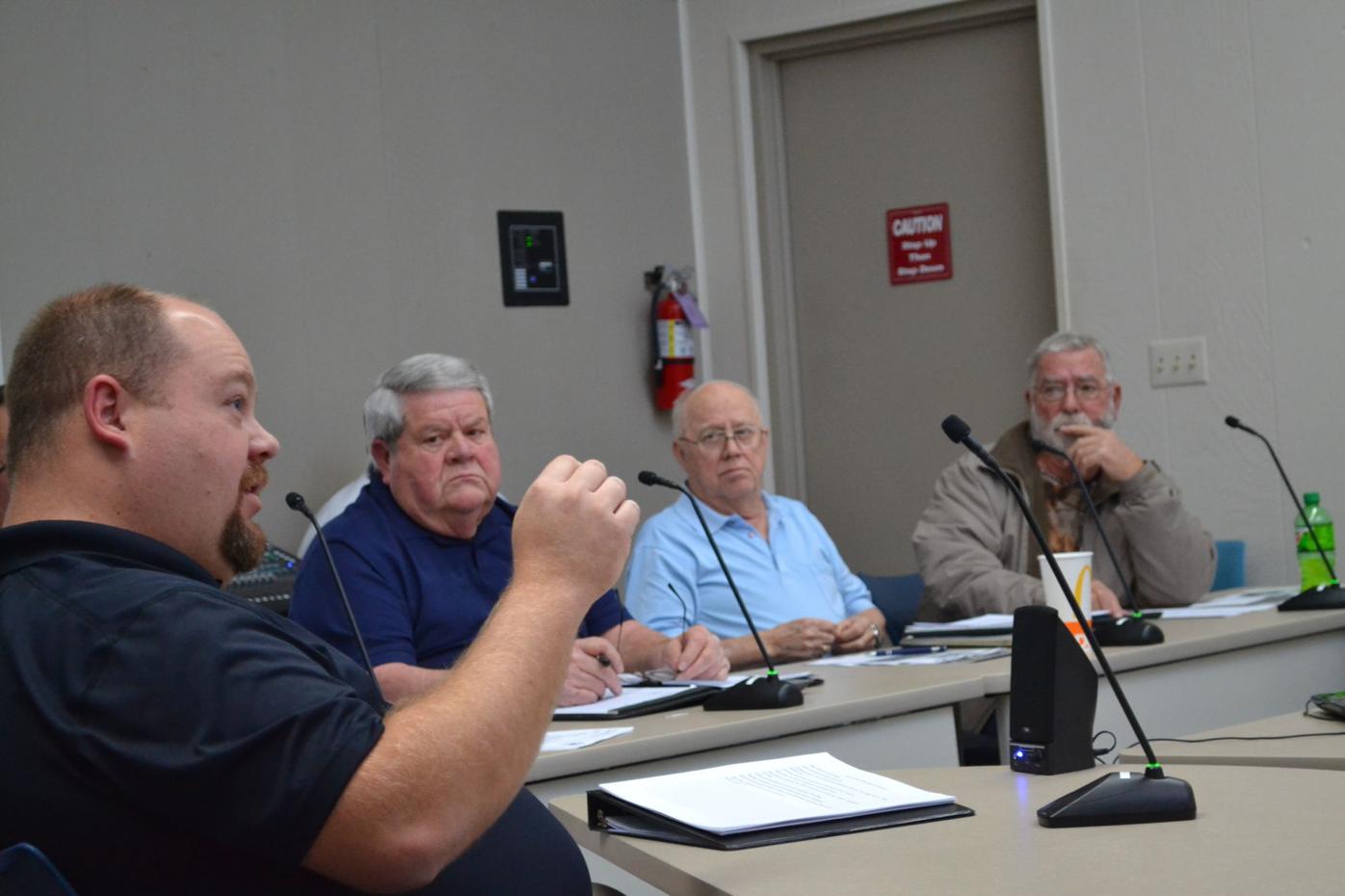 This graphic shows how the Hawkins Co. simulcast analog system has worked since its install with a repeater on Short Mountain, Town Knob and Bays Mountain.

As is seen in this graphic, on Dec. 18, Hawkins County’s simulcast analog radio system lost a microwave link that links the control point at Short Mountain to Bays Mountain causing an outage of the common audio between Town Knob and Bays Mountain.

This graphic shows how the DMR system would work throughout the county.

This graphic shows how the Hawkins Co. simulcast analog system has worked since its install with a repeater on Short Mountain, Town Knob and Bays Mountain.

As is seen in this graphic, on Dec. 18, Hawkins County’s simulcast analog radio system lost a microwave link that links the control point at Short Mountain to Bays Mountain causing an outage of the common audio between Town Knob and Bays Mountain.

This graphic shows how the DMR system would work throughout the county.

As Miller explained, Hawkins Co.’s radio communication equipment, which is used by law enforcement, EMS and fire departments within the county, has been malfunctioning off and on since the beginning of November and has been completely offline since Dec. 18.

“I was tasked from day one with trying to improve our communications in this county,” Miller told the committee. “We obviously hadn’t planned for this outage and had hoped what we had would sustain us until we could get some funding. Our current radio situation endangers the safety of every emergency responder in the county due to responders not being able to hear each other.”

Hawkins Co. has three repeaters throughout the county, which are placed on mountain tops to repeat the radio signals when line of sight is blocked. These three sites include Short Mountain, Town Knob and Bays Mountain.

Miller explained that, even when radio equipment is functioning properly, the hills, mountains and valleys throughout the county present a challenge for radio coverage. Areas around Clinch and Slate Hill had poor to no service even when the communication was properly functioning.

The county has had three complete outages of the radio communications system since the beginning of November.

The first of these occurred on Nov. 2, and Miller contacted the communications vendor, AMK Services, to see about repairs.

“They’re supposed to have a reasonable response time,” he said. “Eight hours or longer was the estimate I was given. During this event, all of the transmitters locked up. We power cycled it that night at the direct recommendation of the vendor, and, luckily, everything came back online. Luckily, we don’t have everything in this one system. That way, when it failed, we were able to move to channels like the Rescue Squad and Highway Department.”

The event on Dec. 18 happened in much the same way, Miller explained.

“I deactivated the microwave system, just to get some communication into the system, which put us only into Town Knob as the only site during that night,” he said. “On Dec. 20, I ordered AMK to break the system to three sites because that was the only way we could get any communication back on those sites. Doing communication that way, the officer or ambulance has to switch repeaters inside their unit on their portables. For communication to effectively get to them, whoever is trying to talk to them has to be on the same repeater. It takes a lot of coordination to know which repeater people are on at different locations in the county.”

Then, on Jan. 5, Miller was notified that all of the equipment at the town knob site had stopped working. He was able to disconnect the malfunctioning repeaters and replace them with some spares. Though this equipment is outdated, it is currently functioning.

However, this used the last of the spare link radios in the county.

On Dec. 18, the county’s simulcast analog radio system lost a microwave link that links the control point at Short Mountain to Bays Mountain, causing an outage of the common audio between Town Knob and Bays Mountain.

“It caused the system to go into complete failure at that point,” Miller said.

The 900MHz link radio at Bays Mountain is presumed to be bad, but Miller explained that the vendor the county uses “had a hard time determining what was wrong with the system.”

Unfortunately, a new MimoMax link radio would have to be shipped from New Zealand, would take around eight weeks to arrive and would cost around $11,318 without installation costs. For a fee of around $325 per radio, the county also has the option to send the malfunctioning radio back to its manufacturer for diagnostic testing; however, Miller explained that the vendor isn’t sure what the source of the problem is or whether it can be repaired. Should the problem be fixable, the county would then incur the additional cost of the repair.

The county did have a spare 900MHz link radio, but it isn’t functioning either. Miller explained that, when the county’s vendor, AMK Services, looked into the problem, they determined that it was not repaired correctly when returned after being borrowed by the now defunct company Central Communications.

HCSO Chief Deputy Tony Allen went on to explain that he was actually part of around 21 officers working a homicide in the county when one of the radio outages occurred. The team was spread out into nine different parts of the Hawkins County as well as into two other counties.

“Basically, the radios just locked up,” Allen added. “We couldn’t talk to anybody. We actually went into each other’s cell phones trying to get communication that way.”

“There were also two pursuits during this time, and it (the communication system) just stopped, “Sheriff Ronnie Lawson explained. “Not to mention, my officers, as you saw later, ended up catching a murder suspect in Sullivan County. That’s what they were doing that night here in Hawkins County when that happened.”

Miller has looked into just expanding the communications system the county currently has. However, he explained that this would be quite complicated due to overlapping that can be caused when adding transmitters. Overlapping can cause interference in the radio signals when responders are trying to communicate with one another.

The initial cost of the TACN system would be $850,000 for local TACN sites and a new site, as TACN expressed that they would be unable to cover the county without adding more sites than currently exist. Each additional site would cost between $600,000 and $700,000.

The total project cost is roughly $3,380,710, but this system comes with a yearly reoccurring cost of $142,000. However, TACN would take care of any software updates and maintenance to repeaters at no cost to the county.

He also noted that the TACN system is 800 MHz, which does not work as well in mountainous areas as some other systems unless you have numerous repeaters. Additionally, if the county only switches certain agencies to the TACN system, it could hurt the interoperability between agencies.

The total project cost would be around $723,459 with an additional yearly maintenance contract cost.

This system would be owned by the county and is expandable up to 15 sites. It also offers cell app services for an additional cost and uses a microwave link loop so that the system will not fail by losing one microwave link.

However, this system does not allow paging over the radio, so paging would have to be app-based with a paging system on repeater lines.

Miller specified that the number of radios included in both cost estimates is, also, an estimate and would need to be adjusted for each department. Neither cost estimate includes 911 dispatch center equipment.

In order to pay for a project of this size, Miller explained that he and Mayor Lee hope to find grant money.

“We’ve discussed emergency grants that may be faster than regular grants,” Miller said. “No grant is a speedy process. But, that funding was being pursued even prior to this outage.”

“I’ve been working since September of last year with the U.S. Dept. of Housing and Urban Development Group in Nashville, and there’s a good possibility we might get a $420,000 grant on this,” Lee added. “There’s no guarantees, but it’s looking pretty good.”

However, if the county wins the grant, Lee added that it could be several months before the county would get the grant money.

In the end, the committee asked Miller and Lee to form a task force to decide between two potential options for new communication equipment, report back to the committee and begin looking into the specifics of a permanent solution.

The public safety committee will meet monthly rather than quarterly until this issue is permanently resolved, and the next meeting is set for Feb. 5.