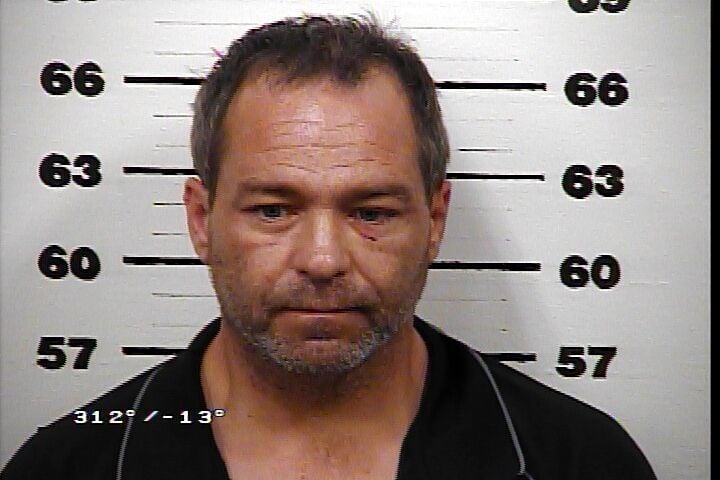 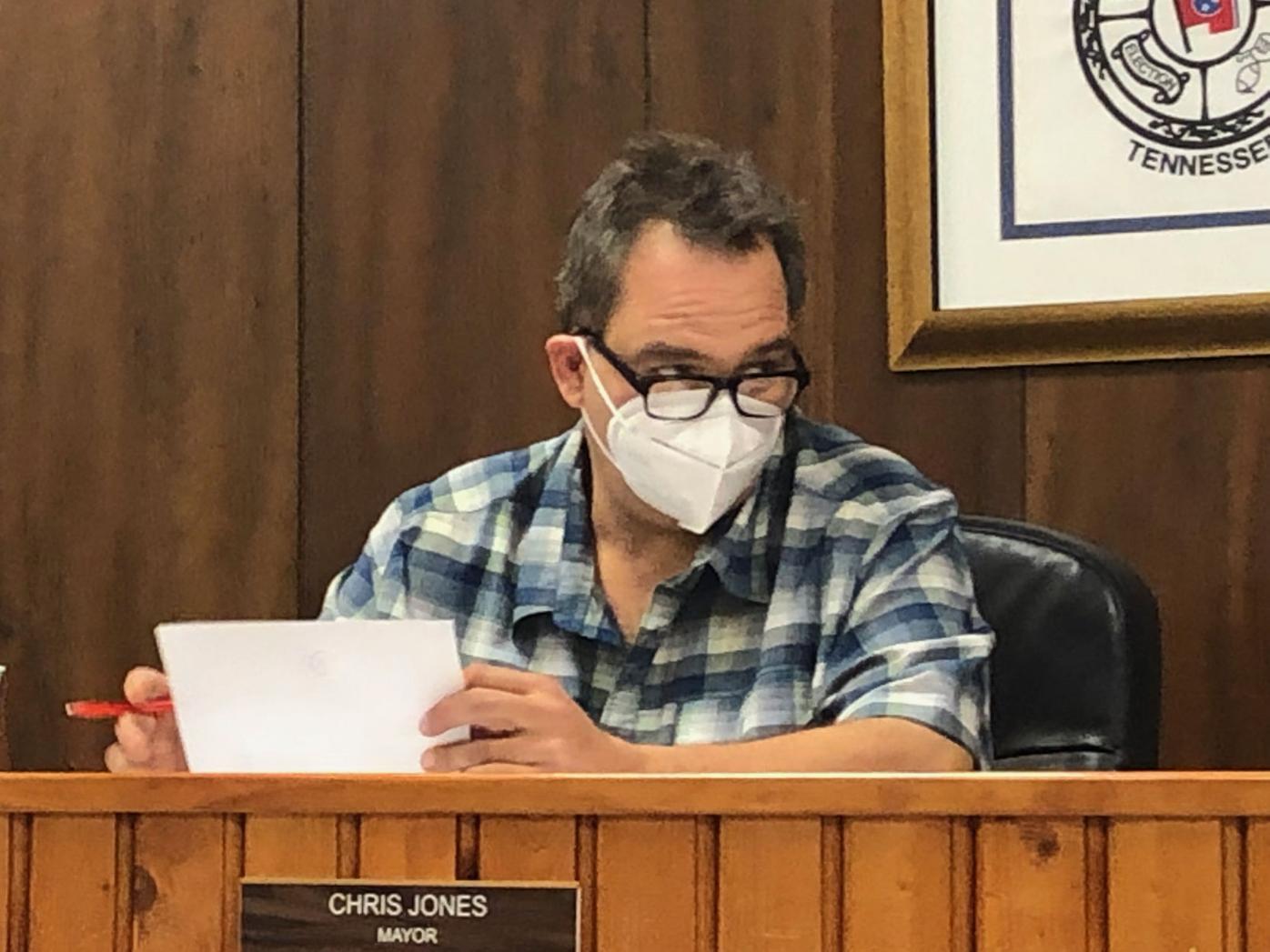 Chris Jones presiding over the May 28, 2020 monthly BMA meeting. He was arrested for domestic assault just hours later. 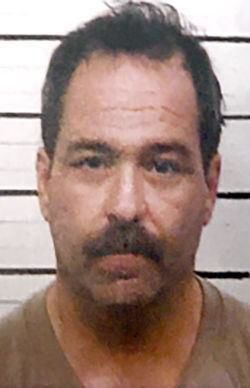 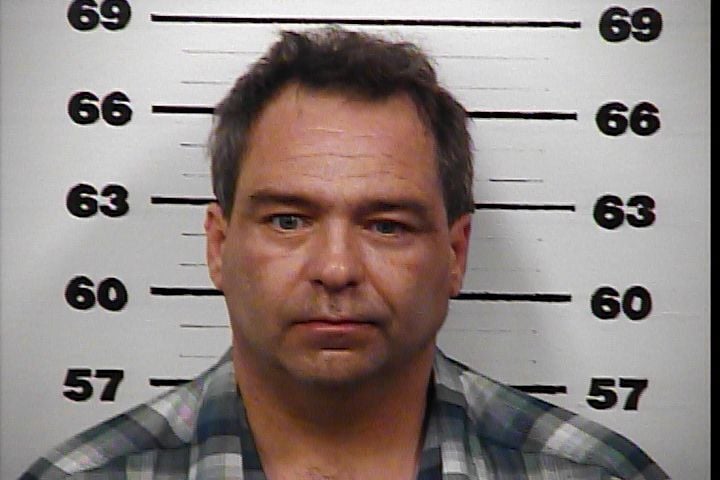 Jones’ mugshot after his June, 2020 arrest for domestic assault just hours after presiding over a town Board of Mayor and Alderman meeting

Chris Jones presiding over the May 28, 2020 monthly BMA meeting. He was arrested for domestic assault just hours later.

Jones’ mugshot after his June, 2020 arrest for domestic assault just hours after presiding over a town Board of Mayor and Alderman meeting

Though he will serve no jail time for either case, he became a convicted felon as of that day. He will also still have to pay $571,000 in restitution and damages from a civil judgment.

As part of the first case, the 50-year-old Jones accepted a plea deal on a charge of financial exploitation of an elderly adult, a Class D felony, in exchange for a sentence of two years on supervised probation.

This came after Jones was indicted in February of 2020 on one count of theft over $250,000, a class A felony punishable by up to 25 years. Jones was accused of stealing more than $300,000 from his elderly grandmother’s estate in West Virginia prior to her death in 2016.

This case stemmed from an incident in June of 2020 when he misused the official Mount Carmel town seal to create a fake eviction notice in an effort to remove his former girlfriend from his residence.

According to an article from the Cornell Law School, with an Alford Plea, the defendant claims neither guilt nor innocent towards the charges brought before them. However, the defendant does accept all ramifications of a guilty verdict, and the end result is still a conviction.

In depth articles following each step of these and other cases against Jones will be linked to the online version of this article.

Embezzlement and a civil case

Jones’ grandmother, Marceline Carpenter, passed away on Jan. 2, 2016 in an assisted care facility in West Virginia.

The lawsuit claimed that Carpenter had developed dementia in her later years and was not competent to make Jones her power of attorney or to approve financial decisions.

“We would have had to prove, and we believe there was evidence, that, when she signed the Power of Attorney document that gave [Jones] certain rights over her money, she did not fully recognize what she was doing,” Third Judicial District Attorney General Dan Armstrong told the Review recently. “That would have been the crux of the case if it had gone to the jury.”

A hearing in the case was held Aug. 14, 2017, but when Jones did not challenge the lawsuit nor attend the hearing in person to offer a defense on his own behalf, Judge David Wilmoth entered a judgment by default, ordering Jones to pay $571,569, which includes compensatory and punitive damages, attorney fees, and pre-judgment interest.

“The Court finds Defendant’s conduct reprehensible,” Judge Wilmoth wrote. “Defendant continued in his actions of conversion and embezzlement from his grandmother for a period of approximately one year, draining nearly all of her assets over that time. Defendant must have been aware that his actions were causing, or were likely to cause, harm. It does not appear that Defendant attempted to conceal or cover up his actions or the harm caused by them.”

“You don’t have the right just to take their money”

Attorney General Dan Armstrong told the Review that the state of West Virginia actually declined to prosecute the embezzlement case, so Armstrong was asked to look at it.

Because at least some of the money Jones took from Carpenter was funneled through banks in Tennessee, it was possible for Armstrong to prosecute the case.

“The law was much more narrow back when he committed these acts,” Armstrong told the Review. “The theft statute was the one we would have to travel under. Because of that, it made it much tougher, given the fact that there was a Power of Attorney that had been executed to [Jones]. He could argue that he had the right to some of those funds.”

Armstrong added, “However, as the law now makes clear, even if you have the right of Power of Attorney over somebody, you do not have the right just to take their money. That law is now clear, but it wasn’t as clear then…I happened to serve on the Elder Abuse committee with the DA’s conference that strengthened the law. Over the last three years, we had the general assembly to tighten up the law on the financial exploitation of elderly and vulnerable adults. We certainly have much stronger law in place now.”

According to published reports, Long and the other family members who filed the lawsuit against Jones were unhappy with the plea agreement and wanted to see Jones face a trial.

“I understand they are not happy, but they have a civil judgment, and he has now been convicted of a felony in regard to his actions with his grandmother,” Armstrong said. “Given the facts, we felt that was the best we could do. That’s why we entered into the agreement. We certainly did more than West Virginia did with it, because they refused to prosecute it. It’s kind of interesting that they didn’t go forward with the prosecution, yet a judge there found [Jones] liable for a lot of money.”

Armstrong also told the Review that Jones’ mother spoke out against Jones during the May 20 court date.

“At the end of the day, all the victims have a right to have their say, and, in this case she (Long) did,” Armstrong said. “His mother spoke at the plea and spoke against [Jones] pretty forcefully.”

The Class E felony misconduct conviction stemmed from an incident in June of 2020.

On May 28, 2020, just hours after presiding over a Board of Mayor and Alderman meeting, Jones was arrested for domestic assault at the home on 337 Hemlock Street in Mount Carmel that he rented from former Alderman Carl Wolfe.

When Jones was released from jail on June 1 he “was rendered effectively homeless,” as a writ of ouster reads, because his alleged assault victim, Amber Hale was still living at the home, and Jones was ordered to have no contact with her.

Jones allegedly drafted a phony eviction notice on June 2 on his desktop computer within his City Hall office.

Shortly after, Mount Carmel City Attorney John Pevy filed an official writ of ouster against Jones and Wolfe, alleging that the two had misused the official town seal in an effort to have Hale evicted from the home.

“In the presence of Mount Carmel police officers, Jones stated that under the auspices of making the unlawful eviction document ‘look more official’ he would stamp it with the town of Mount Carmel official seal,” Pevy stated in the ouster notice.

Pevy added, “Thereafter, Jones affixed the Town of Mount Carmel’s official seal to the eviction notice document while in the direct presence of a Mount Carmel police officer, the City Administrator, and Alderman Wolfe, though neither the police officer nor the City Administrator were fully cognizant of the purpose to which the Mayor was putting the Town’s seal. At no point were either Jones or Wolfe in their official capacity as members of the Mount Carmel Board of Mayor and Aldermen, authorized to carry out eviction proceedings, nor to emboss personal documents with the town’s official seal.”

Assistant Third Judicial District Attorney Akiah Highsmith told the Review at the time that Wolfe had cooperated with authorities since the beginning of the investigation, and would not be charged. However, Wolfe did resign from his seat as Alderman.

Other legal problems for Jones

Jones has also already been indicted by a Sullivan County grand jury in June 2020 on one count of felony criminal simulation and two counts of criminal impersonation.

These charges stem from an incident that took place on Jan. 31 and Feb. 1, 2020 when Jones presented a Mount Carmel police badge to a loss prevention employee at the Walmart on West Stone Drive and asked to see the store’s security footage.

Jones claimed that “he was ‘with Mount Carmel and was sent here by the Police Chief to investigate a stolen van,” read the police report.

Though Jones was formerly a Mount Carmel police officer and detective, he was no longer serving in this role when this incident occurred.

The lawsuit filed by Alderman Steven McLain against the town of Mount Carmel has now been settled for a total of $23,000.