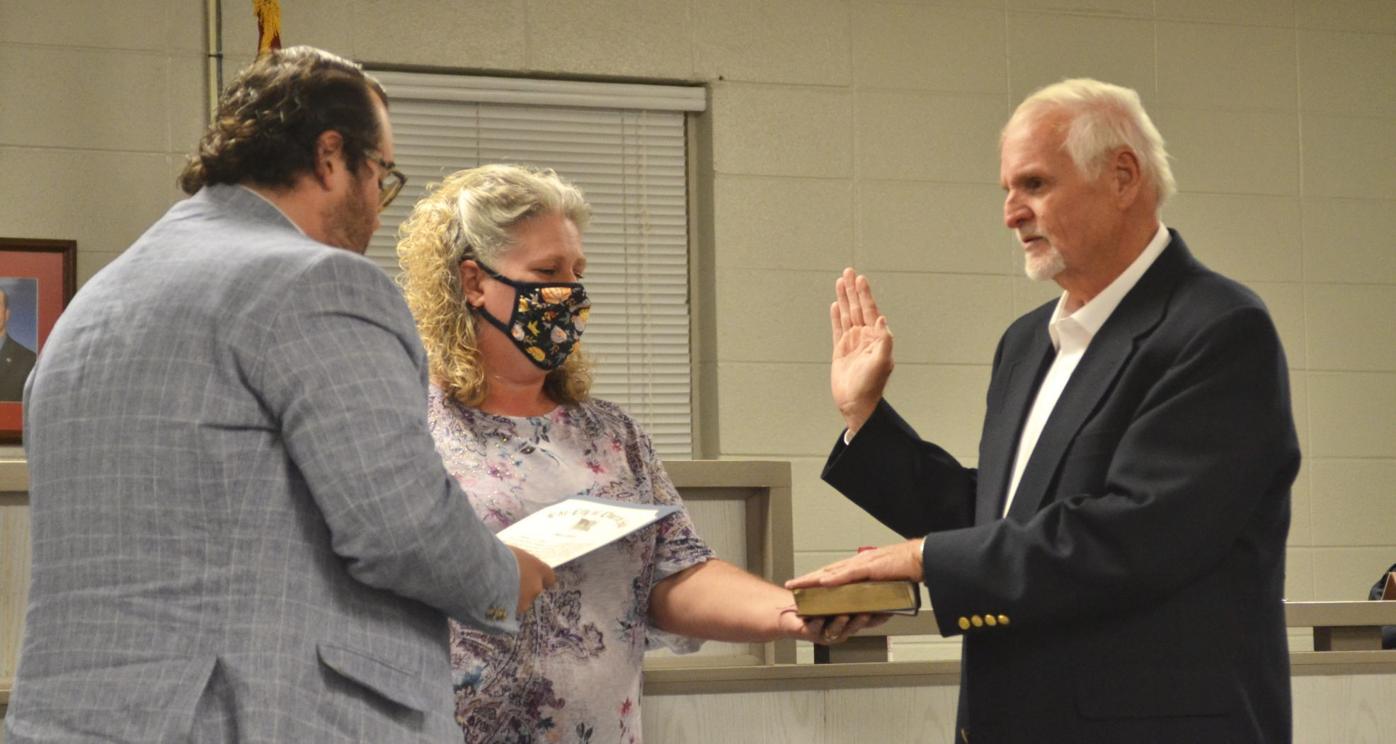 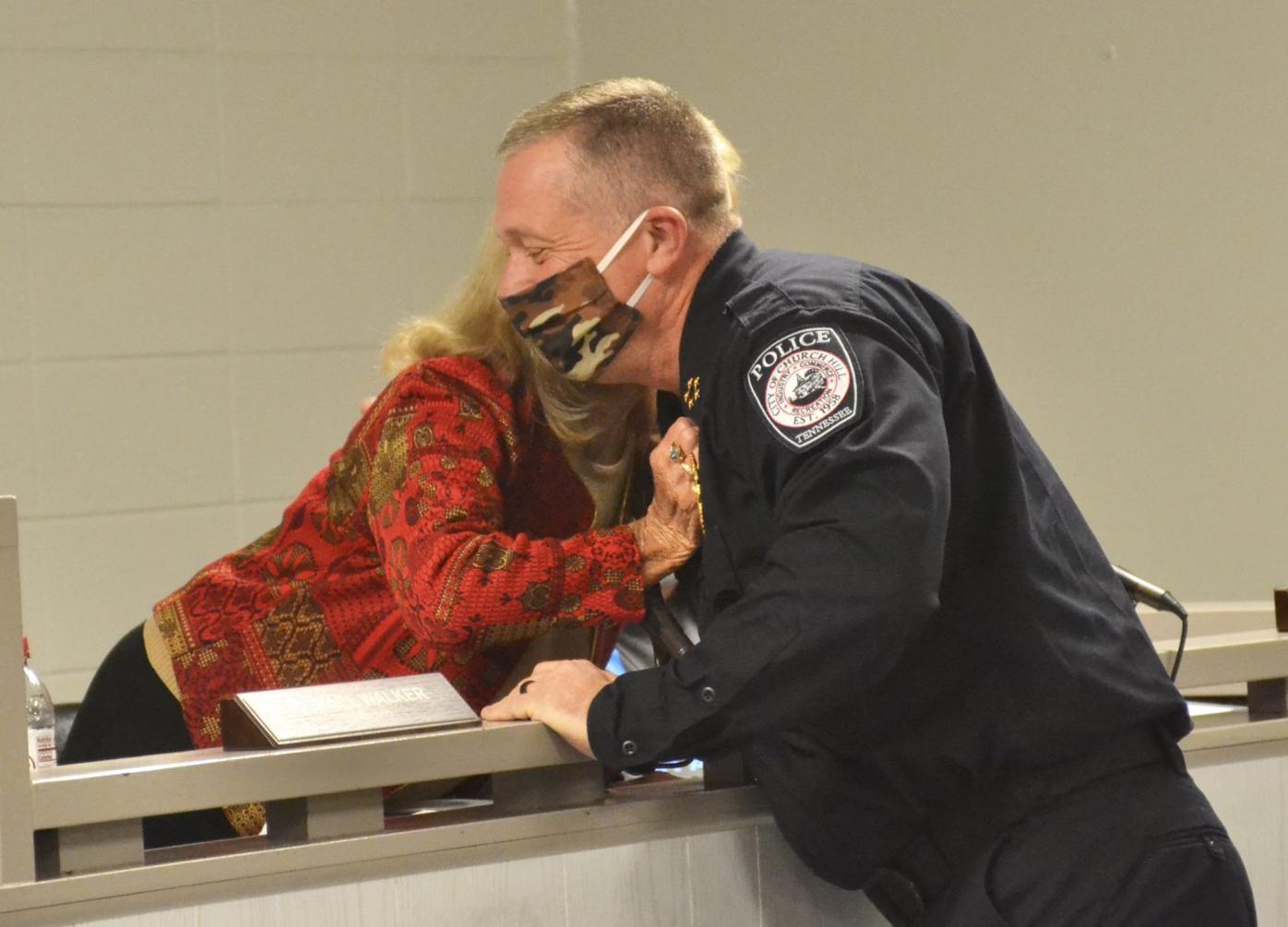 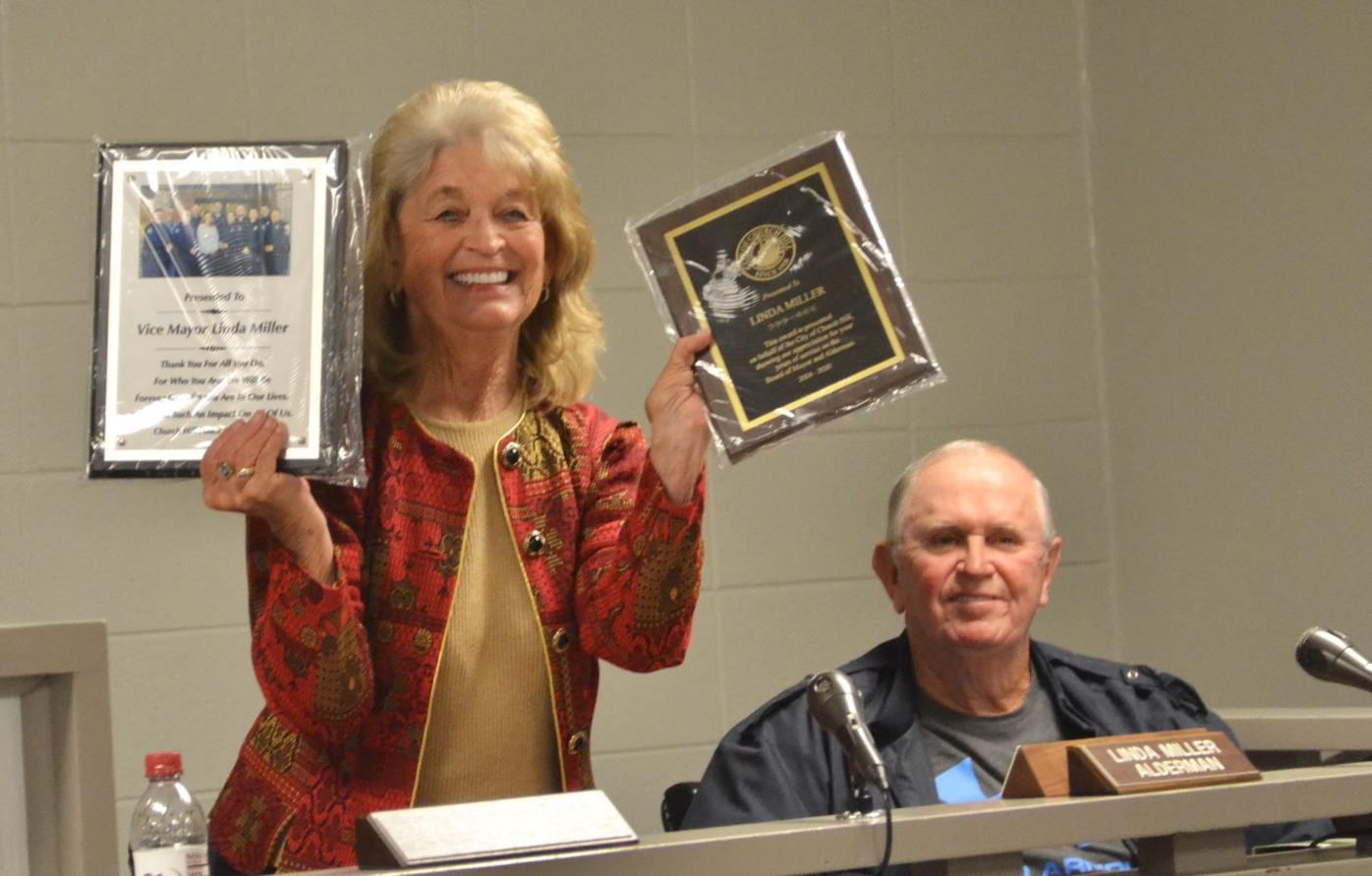 Outgoing Alderman Linda Miller holds both of her ‘thank you’ plaques, as newly re-elected Alderman James Grigsby looks on 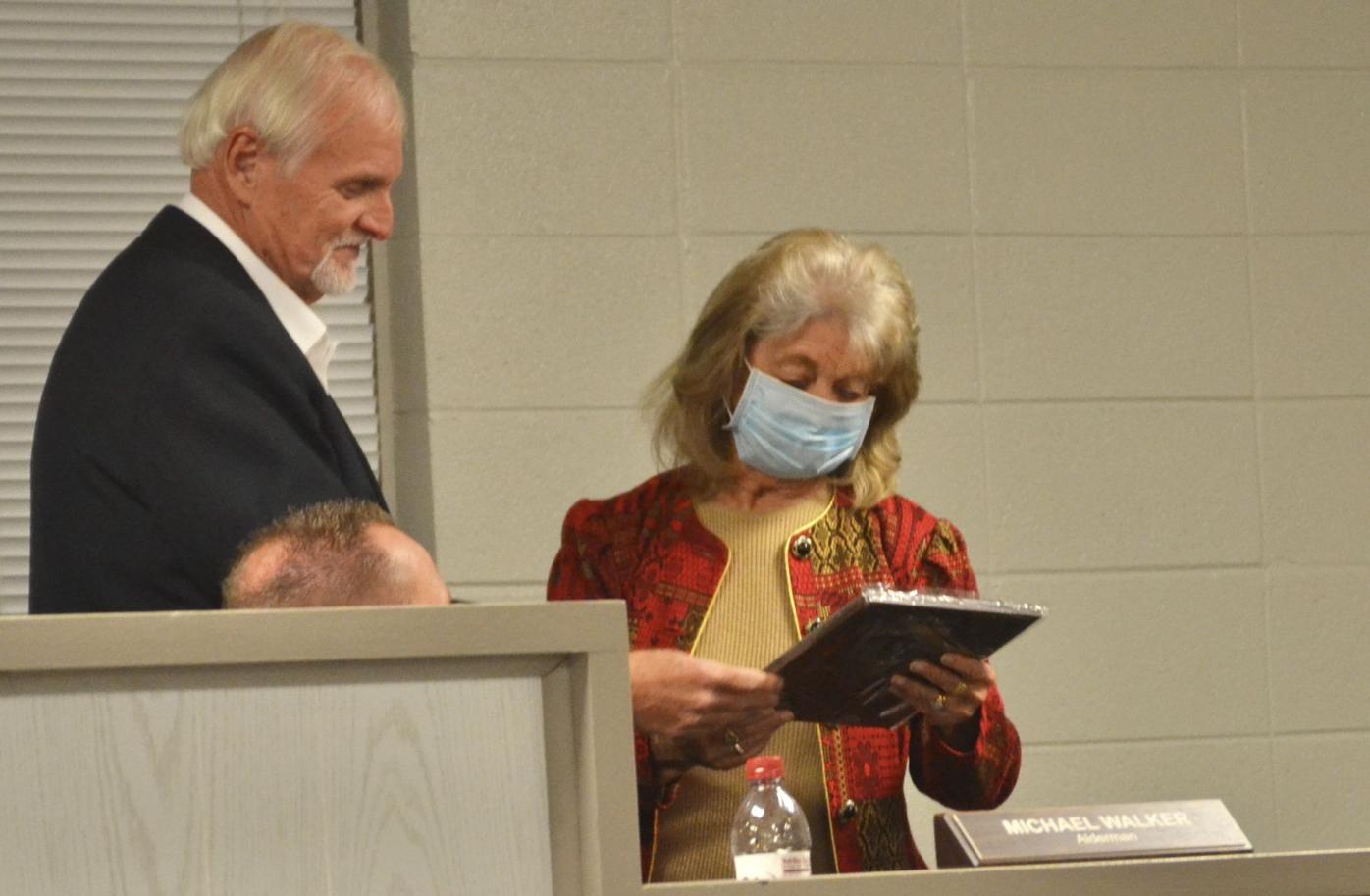 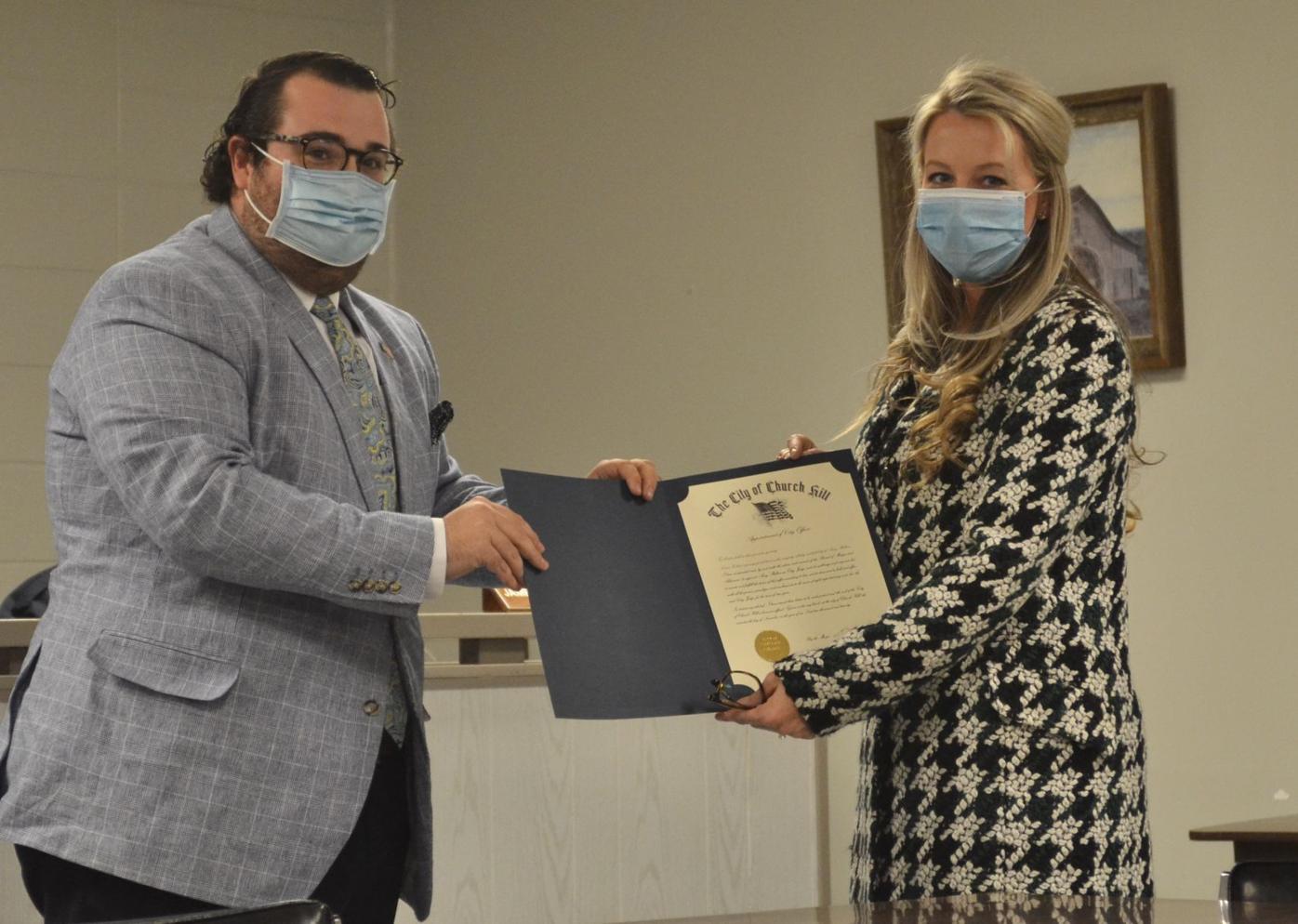 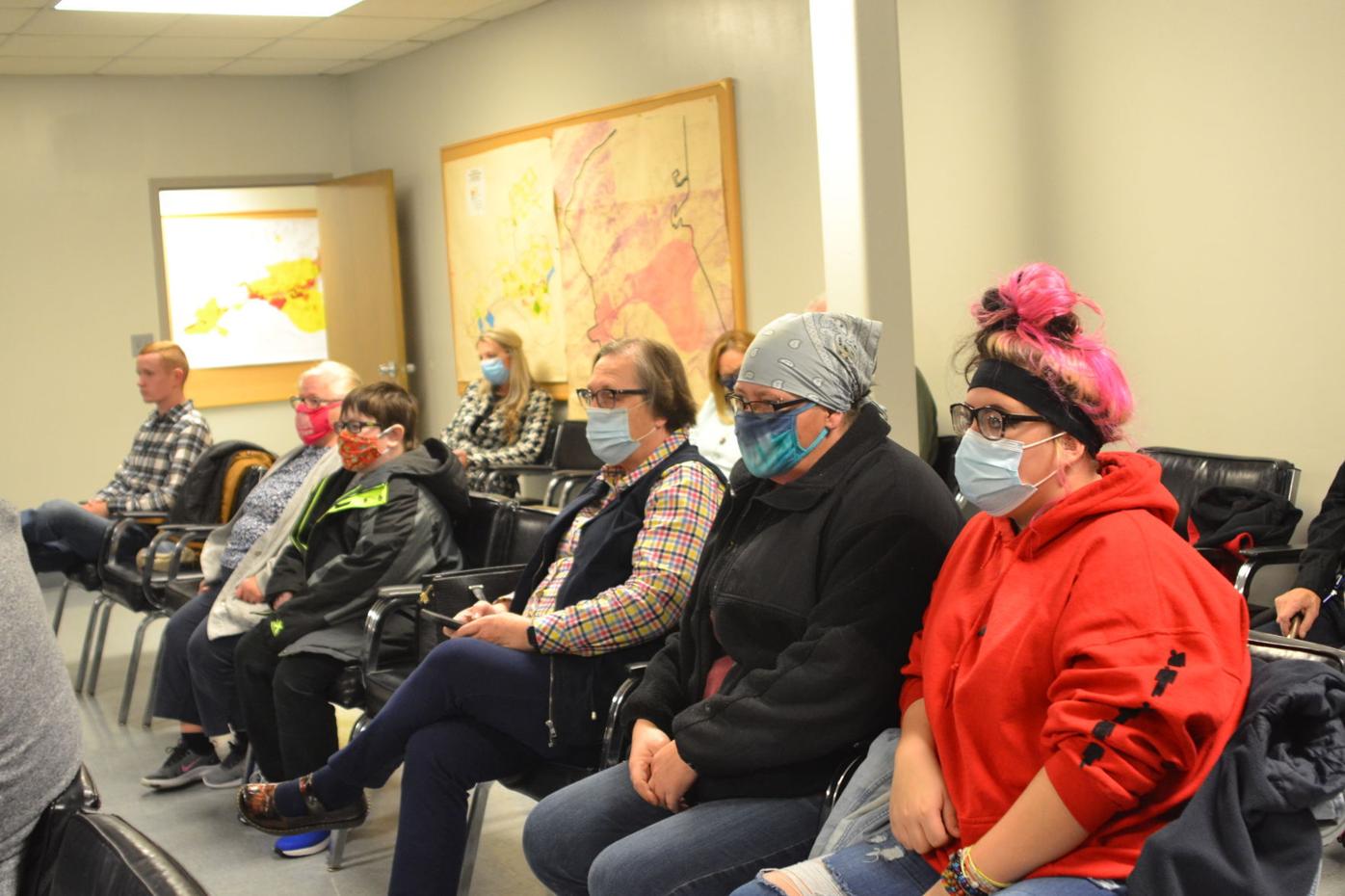 City Hall was filled with more people than usual for a BMA meeting, as people gathered to watch the new office holders be sworn in.

Outgoing Alderman Linda Miller holds both of her ‘thank you’ plaques, as newly re-elected Alderman James Grigsby looks on

City Hall was filled with more people than usual for a BMA meeting, as people gathered to watch the new office holders be sworn in.

The Church Hill Board of Mayor and Alderman welcomed two new faces to the board at their Nov. 17 meeting.

New Aldermen Kathy Christian and Buck Tipton were sworn in at Wednesday’s meeting alongside longtime Alderman James Grigsby, who was re-elected.

Church Hill residents also saw a very familiar face be sworn in, as Dennis Deal was elected to his sixth term as the town’s Mayor.

Outgoing board members Tom Kern, who was unseated as Alderman, and Linda Miller, who chose not to seek reelection, were honored with a plaque and a ‘thank you’ from both Deal and Church Hill Police Chief Chad Mosley.

Kern was absent, so Deal read aloud the inscription on Kern’s plaque.

“I appreciate Tom Kern,” Deal said. “We also have a plaque for him that says, ‘This award is presented on behalf of the city of Church Hill, showing our appreciation for years of service on the board of Mayor and Aldermen from 2016 to 2020.’”

Miller, who has served on the board continuously since 2004, also gave a short goodbye speech to her fellow Aldermen.

“On behalf of the Police Department, we want to thank you for your service to us and the community,” Mosley told Miller. “This is just a small token of our ‘thank you’. You have always been nothing but great to work with, and you’ve helped us. You’re going to be missed.”

“You’re going to make me cry,” Miller replied. “Number one, I’d like to thank all of the citizens for letting me serve for 16 years. I have really enjoyed it simply because I like to know what’s going on in the city, and I like to be a part of it…Secondly, I’d like to thank the employees. We’ve got the best, and I guarantee it. You cannot teach integrity—that’s something they have or they don’t. Our employees have it. We’ve watched them do things they didn’t have to do, but they did it because it was the right thing to do…Number three, with our past board members and our future ones, I think we’ll be in good hands. I hope you will take this job seriously and consider all of the people who are involved in the makings of this city.”

She also went on to thank Deal, saying ‘He always does such a good job, and he’s been here forever. I hope he’s here a whole lot longer. He’s always showed me respect. We’ve had our ups and downs, but, at the end of the night, we have left here as friends…”

In other news, the BMA voted to accept a low bid for the access road into the future site of Holliston Mills Park.

The city of Church Hill has been planning for the 65-acre Holliston Mills Park for quite some time now, but it is just now beginning to take shape.

Before the park can be developed, a public railroad crossing must be built to allow citizens to enter the property. This particular project was opened for bid on May 1. When the low bid of $330,460 from McFall Excavating of Clintwood, Va. was brought before the BMA at their May 19 meeting, the board rejected it.

“They want to look into different options of reducing the cost of that access road,” City Recorder Josh Russell said at the time of the decision. “They’re looking into the possibility of hooking on water a different way — a couple of different avenues to see if we can decrease that cost off the access road and the utility bores.”

At the Nov. 17 meeting, the board was presented with the low bid of $326,392 from Goins Rash Cain Inc. out of Kingsport.

He told the board that the town had received $177,500 from the Governor’s Local Support Grant.

“We’re allowed to spend this (money) on this project because we’re extending an existing road, so that’s a blessing for this city,” Deal said. “That knocks this bid down by 54%. This has been a long time coming, so we’re really very excited about getting this done.”

Since this matter was ‘old business,’ it was voted on before the new aldermen took their seats. The board voted 5-1 with Keith Gibson voting ‘no’ and Tom Kern absent.

The board also discussed two bid they had received to put engineered wood fiber on the ground around the new playground equipment at Derrick Park.

“It’s almost like a type of mulch, but it is very soft, and it meets ADA requirements for parks and playgrounds,” Russell told the board. “Instead of putting gravel or something in there, we wanted it to be ADA compliant.”

“The reason we have to go with this type of material is because of head impact if a child falls over there,” Deal said. “We discussed it with the people who installed the (playground) equipment, and they highly recommended it.”

Russell also noted that it meets federal guidelines for wheelchair-accessibility and “is the most cost effective for ADA servicing playgrounds.”

Russell explained that one company included the cost of installation within their bid, but the other company did not, so he recommended that the board reject these bids and put the project out for re-bid. This time, the town is asking for bids only for the product and not installation.

“We can install it ourselves,” Deal said.

Russell also noted that, just like normal mulch, this material must be added to every few years.

The town has been making big changes to this park over the past few months.

In June of this year, the city officially accepted the low bid from Bliss Products and Services for the new playground equipment, two new picnic shelters and an outdoor amphitheater. The city purchased this equipment using a portion of the $500,000 capital outlay note the BMA approved in May.

The newly installed splash pad in Derrick Park is also part of the $500,000 park improvements. The splash pad was originally slated to be finished in early June, but construction delays pushed this back to July. The city then planned a grand opening ceremony for July 17. Sadly, this ceremony was postponed due to COVID-19, and the splash pad was unable to open this year.

The board also voted in favor of giving each city employee the same amount of Christmas bonus that they have received in years past. Full-time employees will receive $400, and part-time employees receive $200.

The city also pays the taxes on these bonuses, so the employee receives the full bonus.

Additionally, the board voted to maintain the current City Judge, Amy Kathleen Skelton.