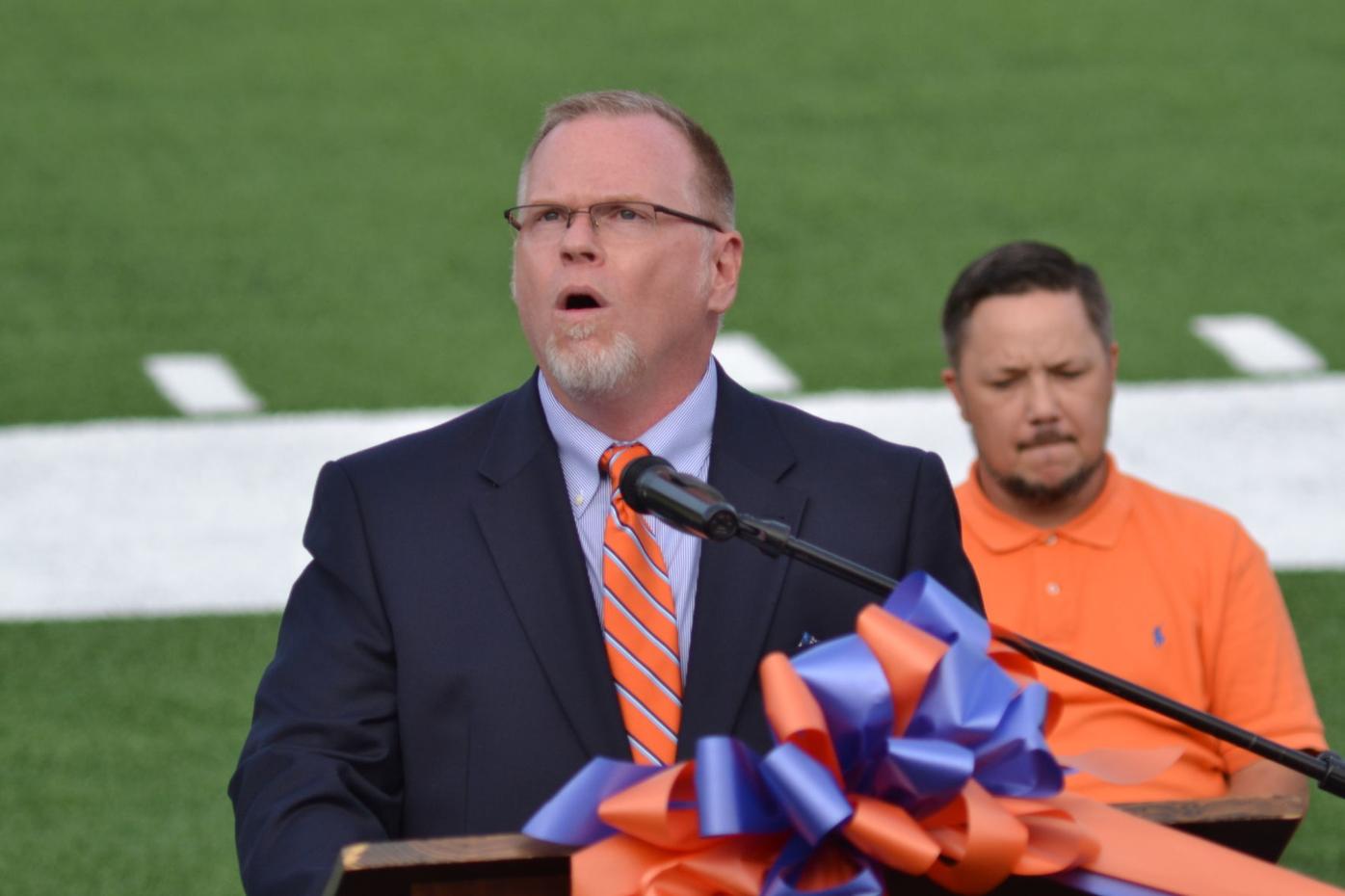 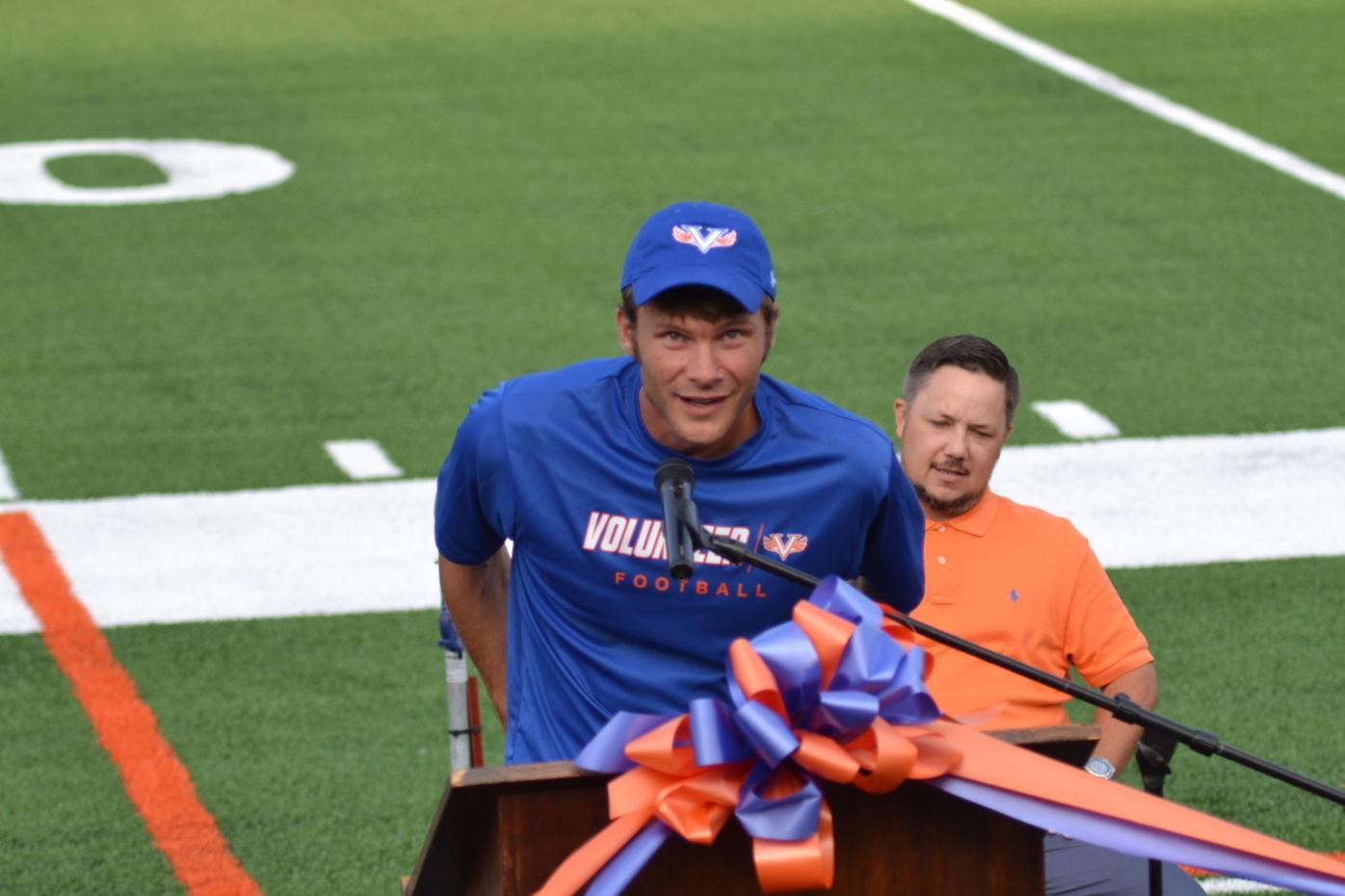 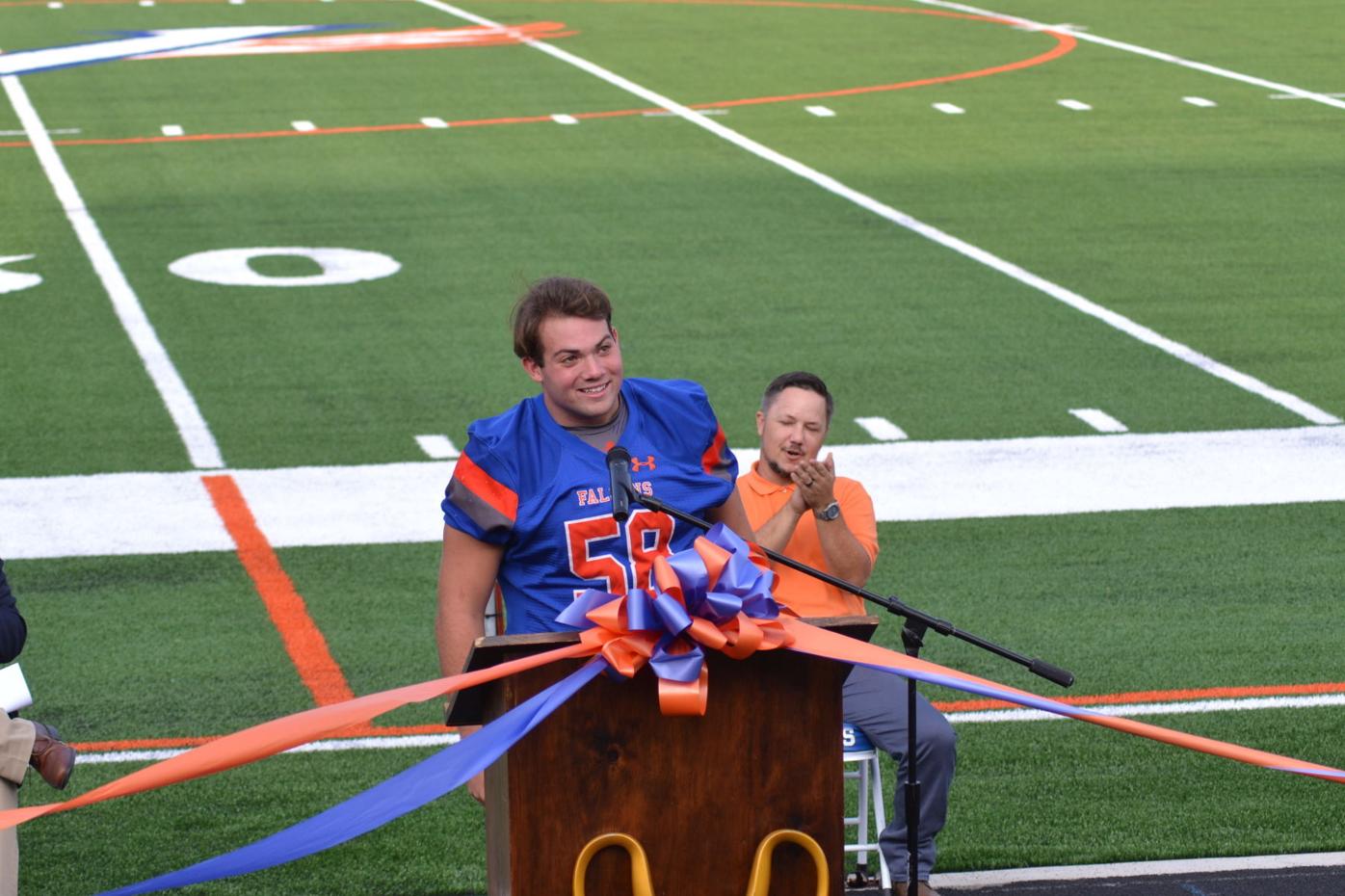 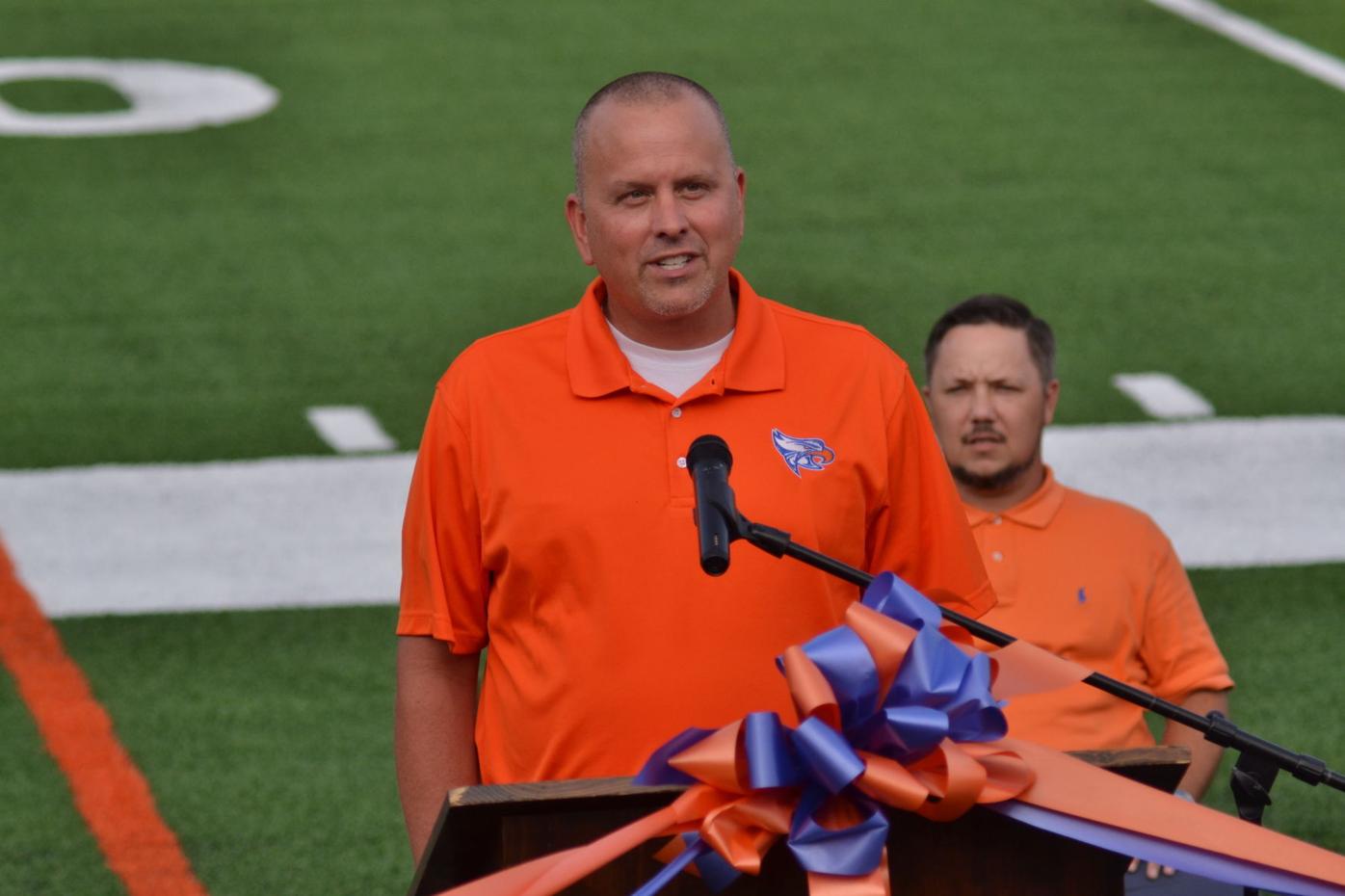 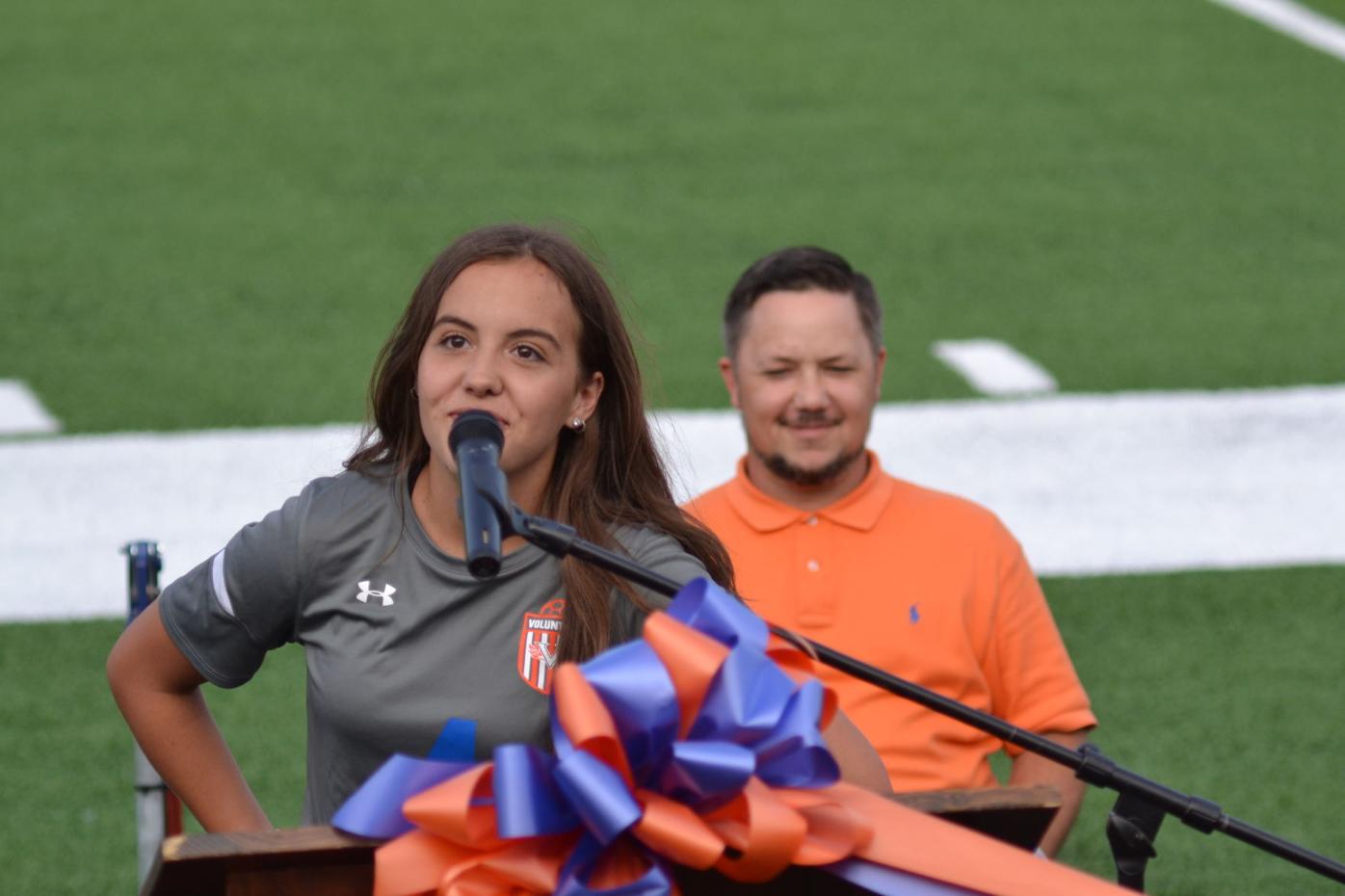 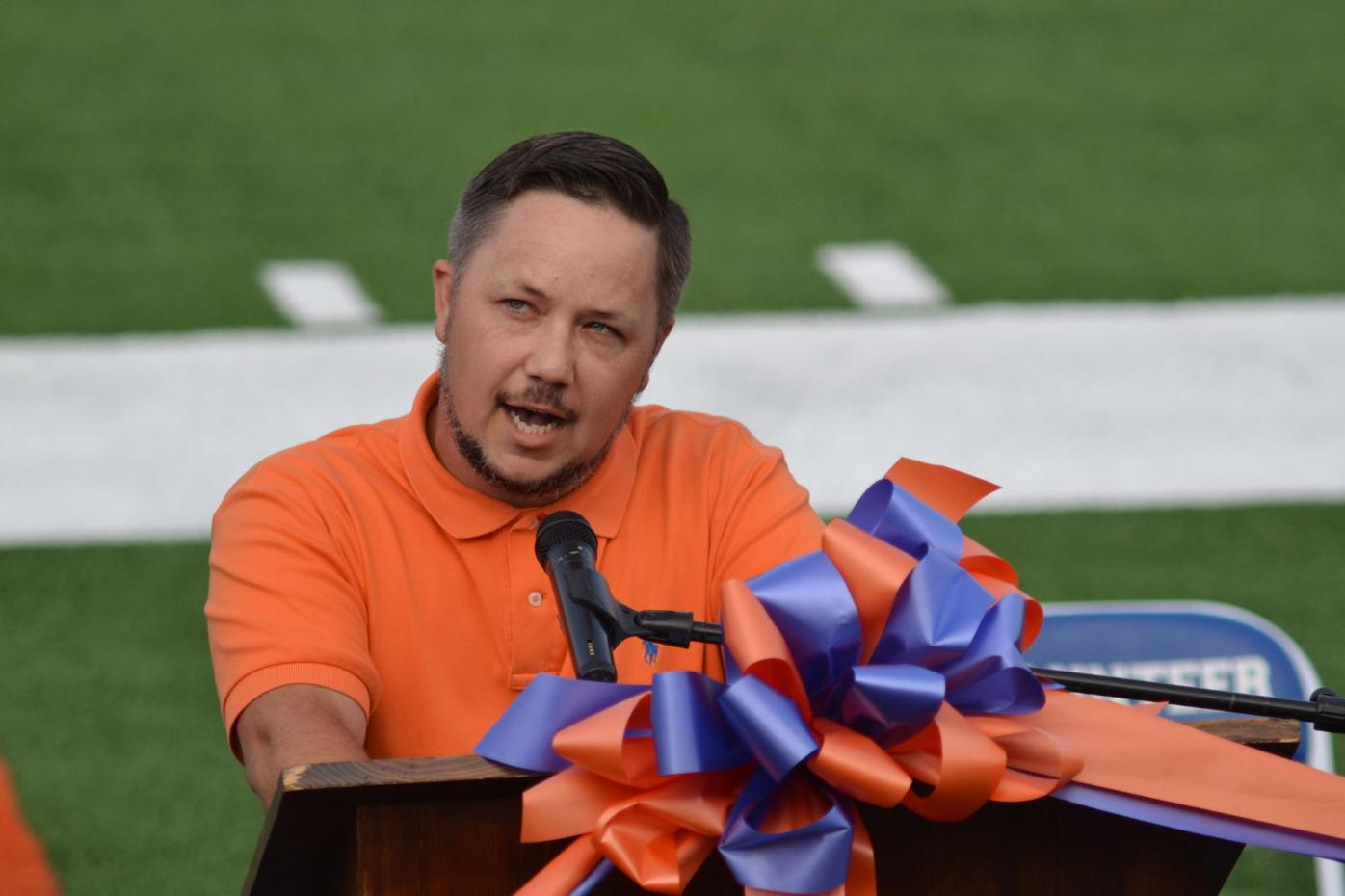 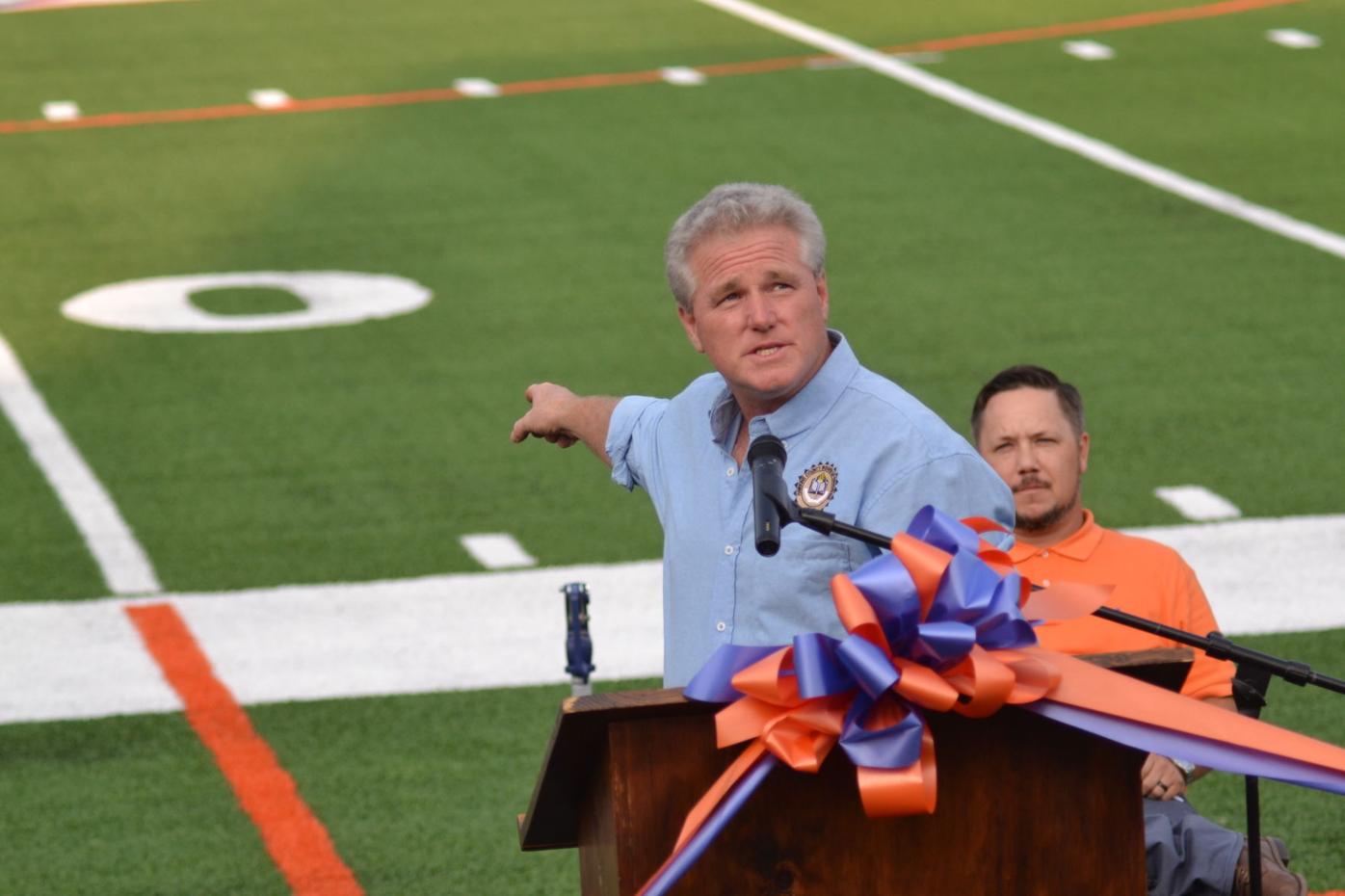 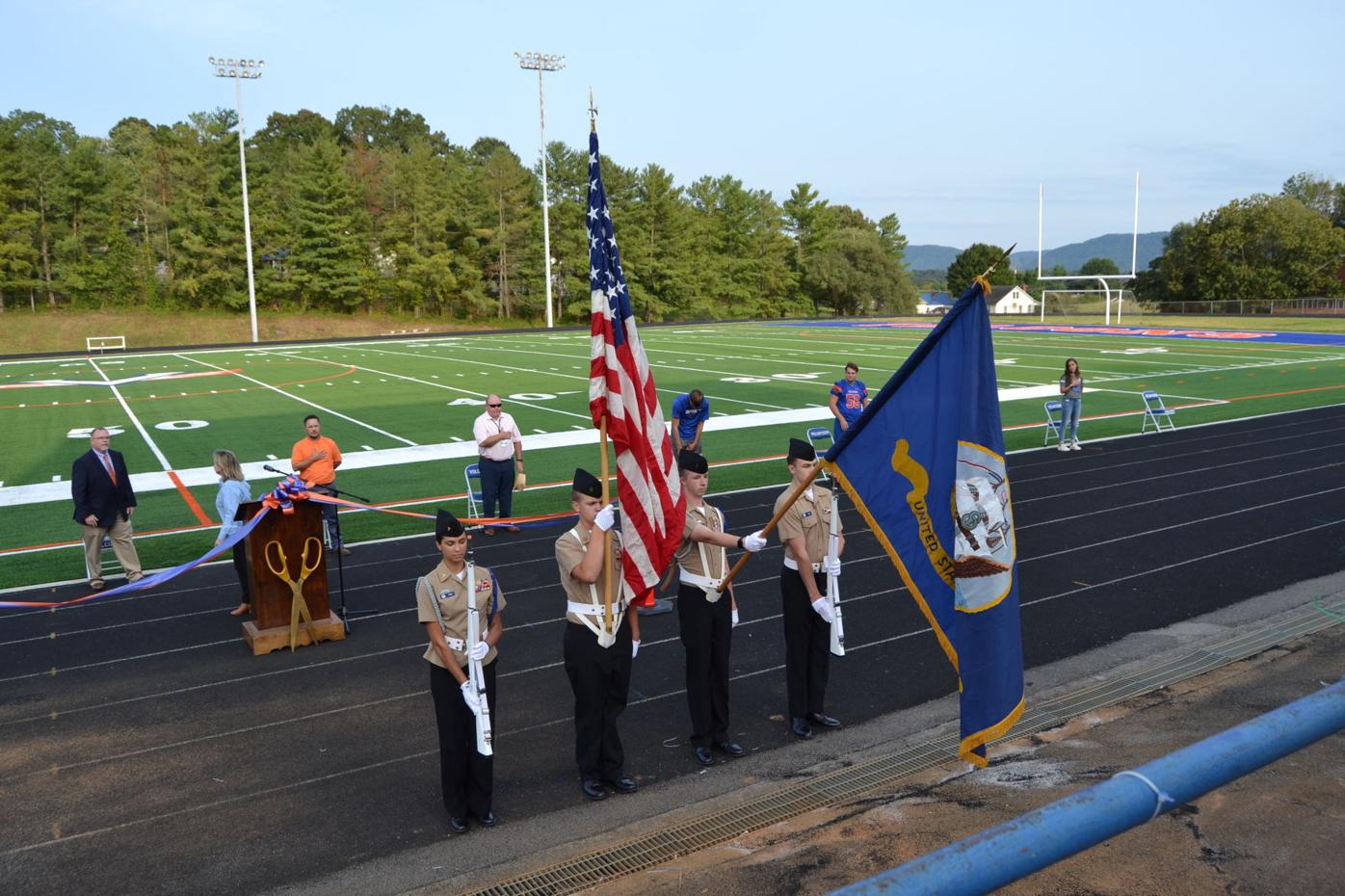 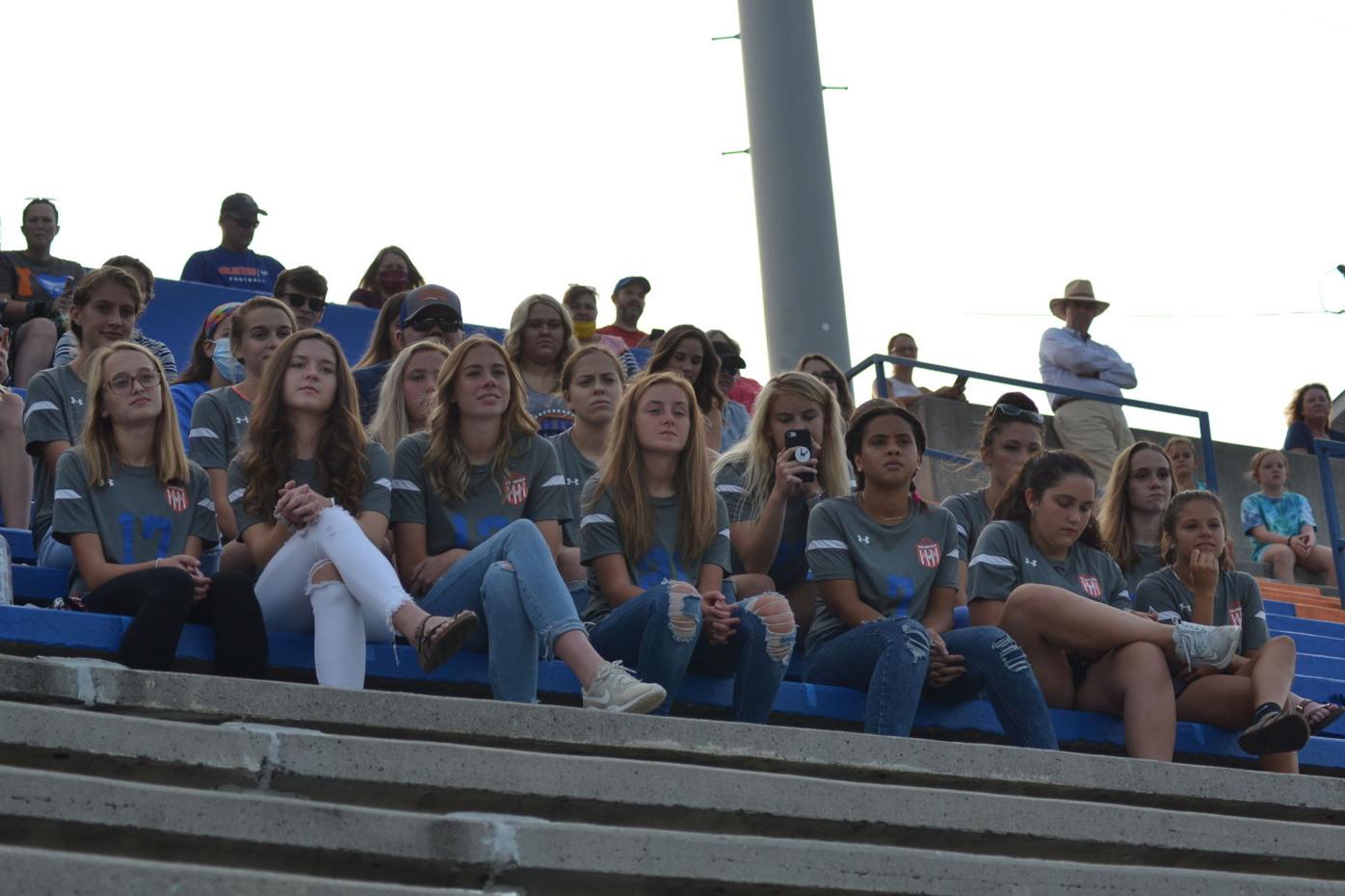 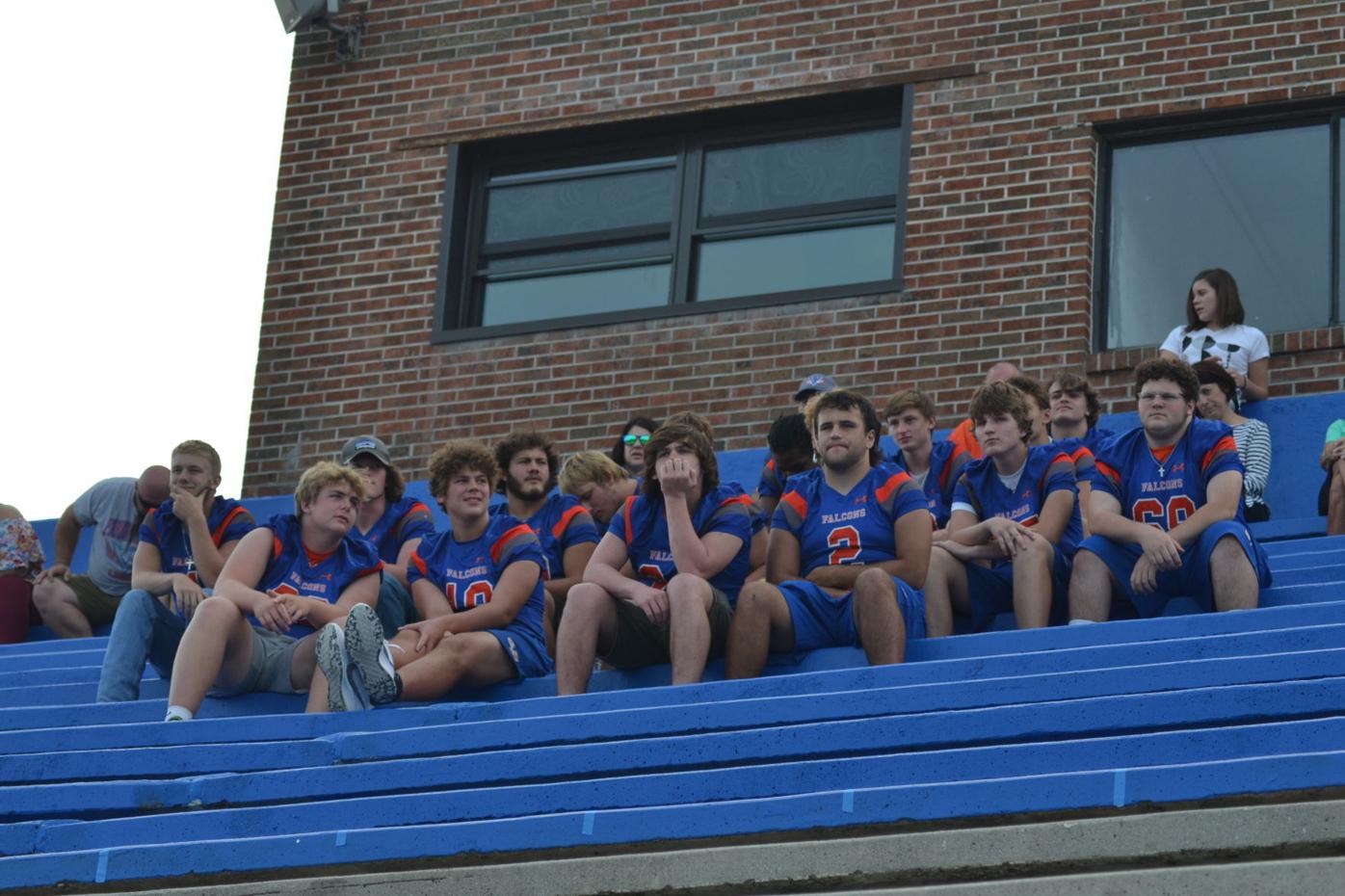 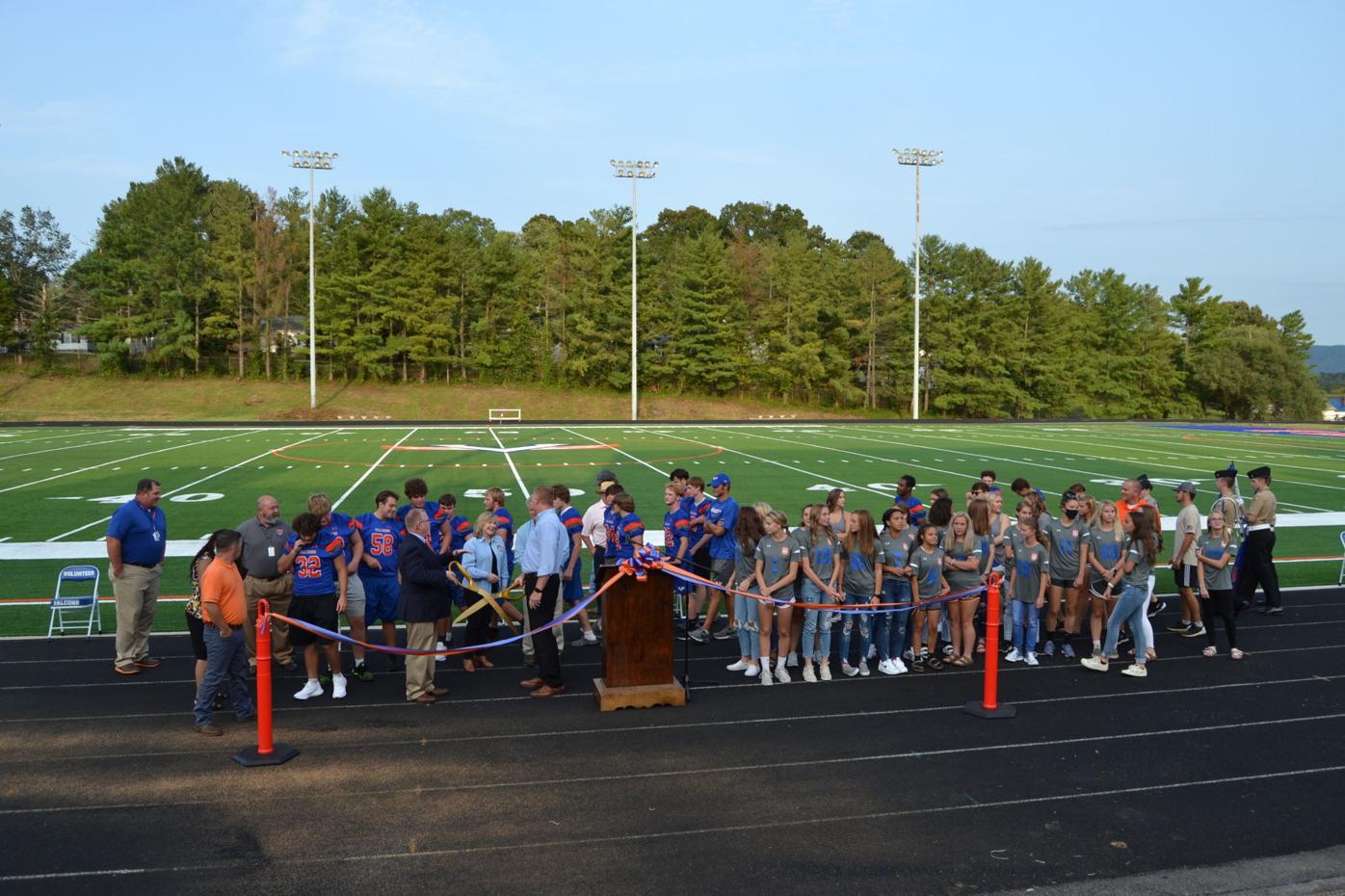 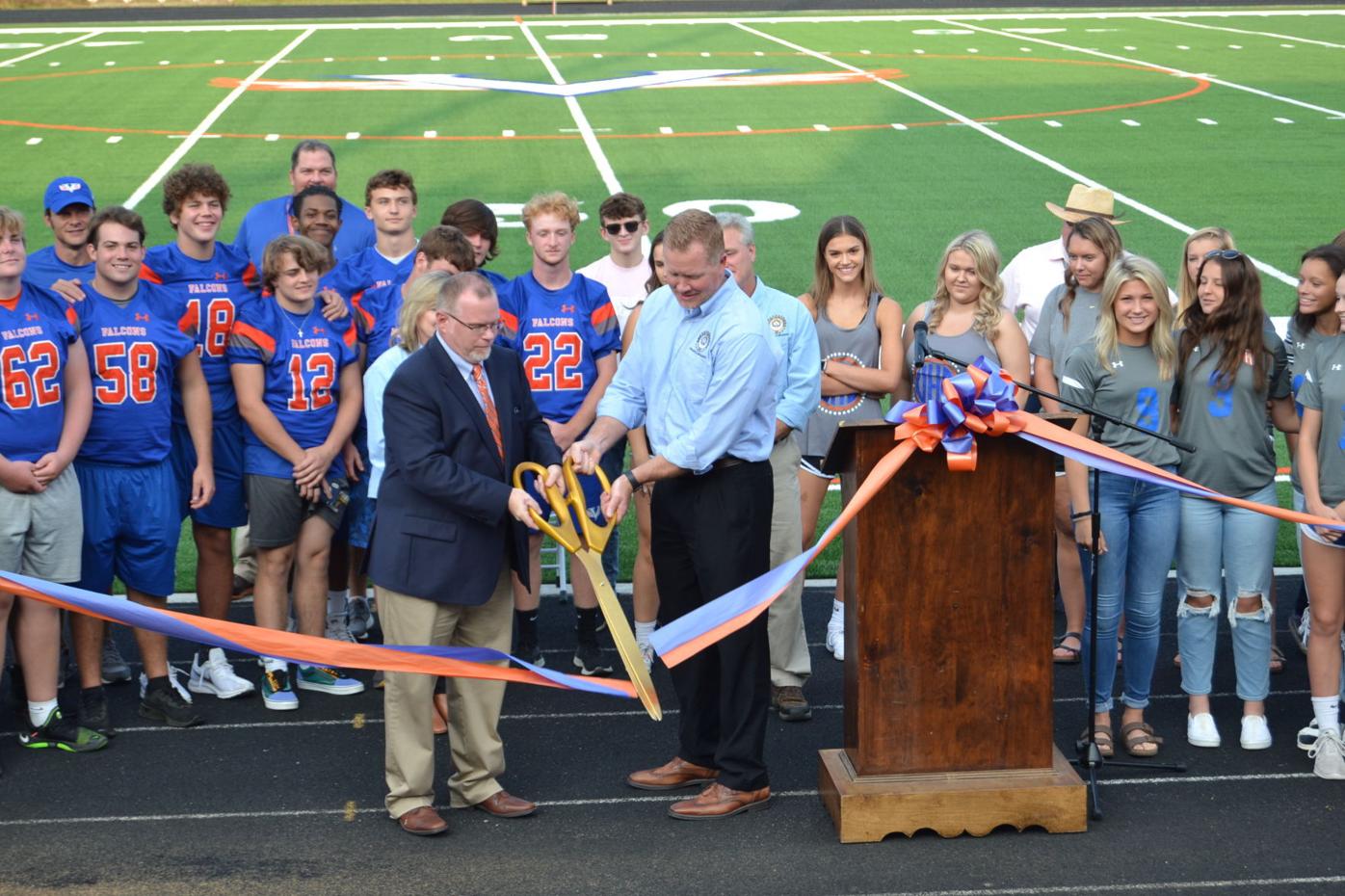 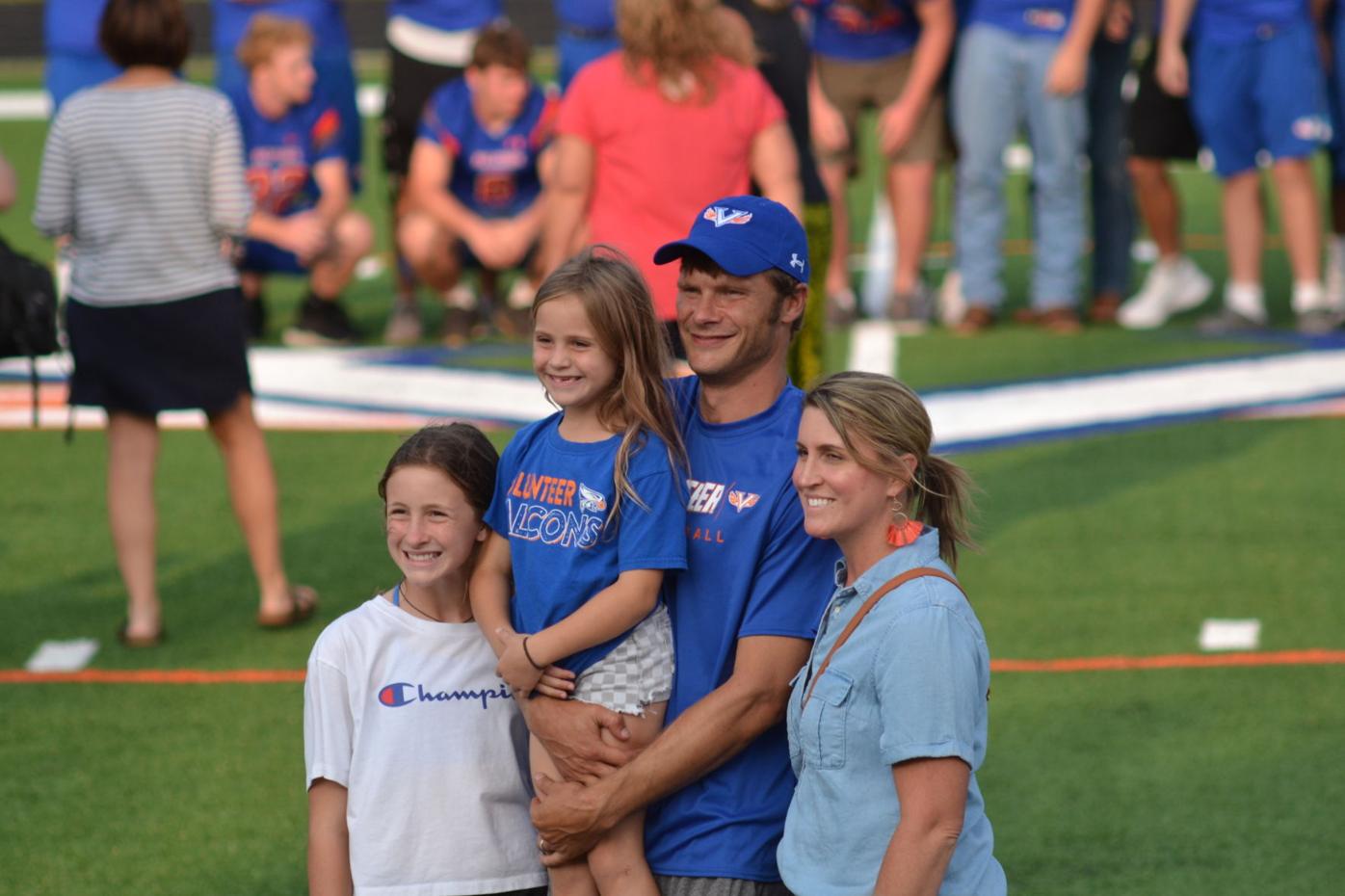 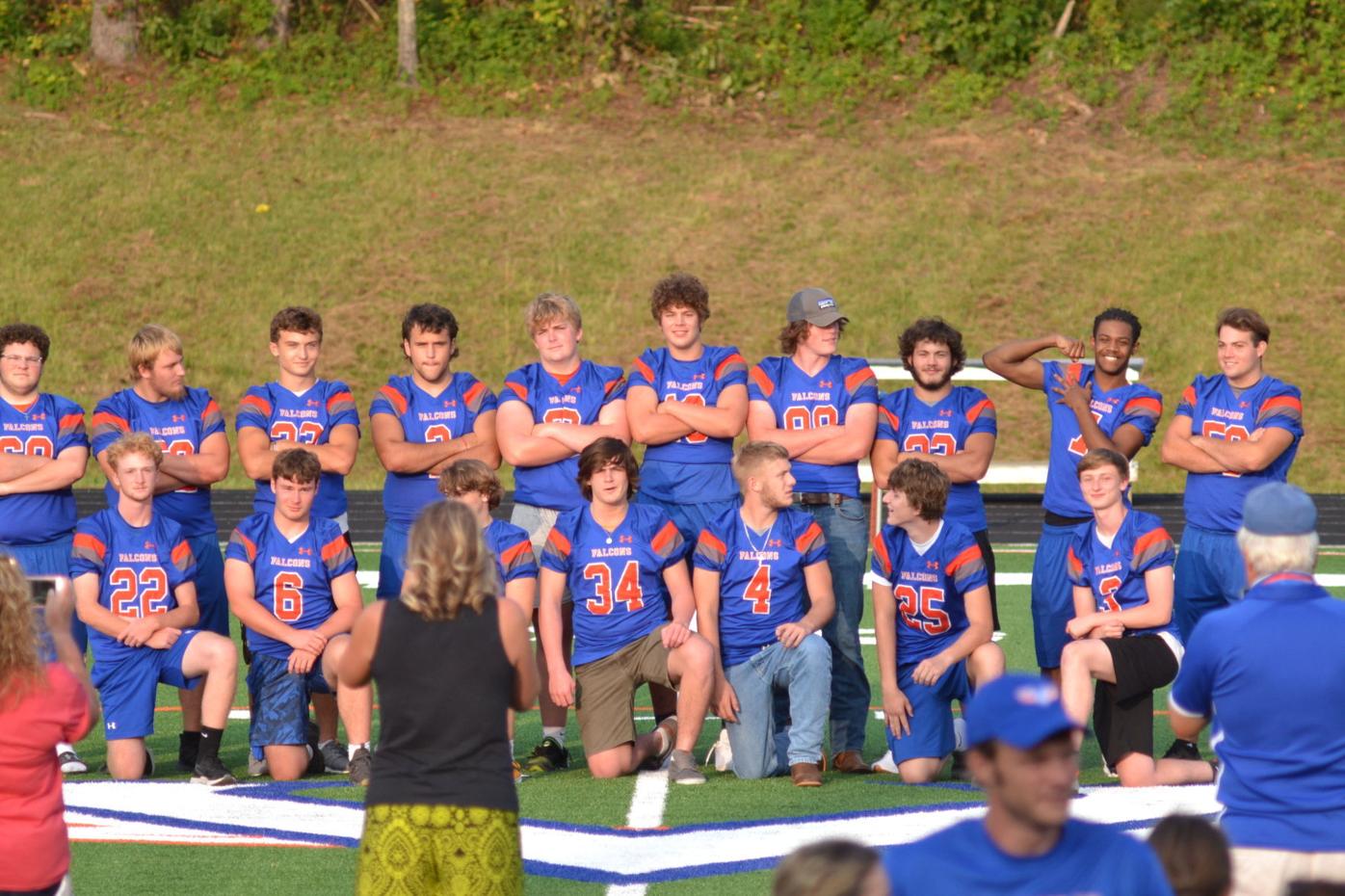 Several school officials and students gave speeches of appreciation to the crowd in the stands before gathering together on the track to officially cut the ceremonial ribbon. Afterwards, attendees were invited to walk out onto the new field for some photo opportunities.

The Volunteer Lady Falcons soccer team got to be the first to compete on the new artificial turf in a Tuesday evening game. The new field will also be the site of the 41st Annual Hawkins County Super Bowl Friday night.

VHS’s new Principal Greg Sturgill began the evening by calling everyone’s attention to the new field, which he called, “beautiful” and “impressive.”

“There are many people who have worked tirelessly to make this field a possibility,” he said.

He told the crowd that, to the VHS community, the new field represents hope.

“As student athletes sit nervous and excited to compete in their sport, they have hope that their team will come away with a win,” he said. “Members of our Falcon band will march with confidence and pride as they perform for fans during halftime. This field will host bands and teams from all across the state. The cheerleaders will lead the fans in cheering on our Volunteer Falcons. Homecoming court will wait with nervous excitement to see who will be crowned Homecoming Queen. Parents will walk their seniors across the field with pride at what their child has accomplished. Hundreds of seniors will cross the field to receive the diploma they worked so hard to earn…”

He spoke of the excitement of VHS athletes to begin using the field the very next day.

He then thanked all of the school system and county government representatives who worked to make the field a possibility.

“Our Director of Schools and Central Office Staff have recognized the importance of having a safe playing field for our student athletes,” he said.

“We thought this was a pipe dream”

“We just thought this was a pipe dream when we started pushing for it a couple years ago,” McMillan said. “From what little I know about it, there was a lot of hard work by people to get this thing pushed through for our kids.”

Senior Captain Braden Allen also briefly addressed the gathered crowd, thanking all of those involved for the “nice playing surface” the team now has to play on.

“This is going to change the future of athletic programs here at Volunteer,” Lukens said. “Getting rained out will be a thing of the past. There will be less mowing and more coaching. We’re super excited.”

Senior Soccer Captain McKenzie Smith also expressed her excitement to have a home game after eight away games.

“We’re excited for the future,” she said.

Athletic Director Jeremy Bailey reflected on the year 1980 when the high school was newly constructed. That year, he said, the outdoor sports facilities were not finished at the same time as the school.

“In fact, the first football team to ever play for Volunteer High School was forced to play their home games at Church Hill [Middle],” Bailey told the crowd. “Fast forward 40 years to 2020, as history is trying to repeat itself.”

He noted that, as school board members and Commissioners weighed the options this summer to deal with the school’s grass field, which had been deemed “unsafe” by inspectors, several of them suggested that VHS students play at Church Hill Middle’s field.

“As if COVID-19 isn’t bad enough, seniors were now faced with playing home games somewhere else for the last hoorah of their graduating year,” he said. “That is where the tide turned towards positive change at Volunteer High School. Administrators, coaches, parents, players and community members formed a unity, developed a plan, executed that plan and provided the students at Volunteer a playing surface that is world class, which they deserve.”

He added, “In years past, maybe this project would have gotten shoved to the side or shut down altogether, and Volunteer students would just have to deal with it. Not this time. With new administration, new coaches and a new belief in our students and the success they will have in life, Volunteer athletes will not have to repeat history in 2020.”

“Embrace this opportunity to use this masterpiece” BOE Chairman Chris Christian encouraged the students in attendance to “work together for common goals” and to make the most of the opportunities they have been given.

“I’m asking that you students embrace this opportunity to use this masterpiece to grow unity not only at this school, but our entire system,” Christian said. “Be the best you can be, academically, athletically and as a person. Let’s be proud of what we’ve got. Let’s not waste the opportunities.”

The idea of artificial turf has actually been discussed for several years within the county’s Board of Education and in various committees; however, the BOE’s June vote to approve the purchase was met with some pushback.

Several experts toured VHS’s field this spring and determined that it was “unsafe to play on” due to the extensive drainage problems. As a result, the BOE was faced with the decision to either repair the surface or replace it with artificial turf.

As Bailey alluded to, the idea was also suggested that VHS athletic programs be held at Church Hill Middle’s field instead of purchasing the costly turf.

In the end, the board voted 5-2 in favor of the $1.25 million cost to replace both the VHS and CHS fields with turf, though CHS’s grass field is currently in good condition.

CHS’s field will be outfitted with turf next year.

One of the main arguments that was made by officials in both the BOE and County Commission who opposed the turf was the extensive cost.

Outgoing BOE member Bob Larkins told the board in June when the issue came up for a vote, that he could not justify spending $1.25 million on artificial turf in the same year when the board voted to close Keplar and McPheeter’s Bend Elementary Schools to save money.

“I have a real problem with trying to justify in my own mind without having done a lot of research,” he said. “What little I’ve done tells me it’s not the wisest move to make at this time. I would like to see the right turf field at both schools, but, financially, I don’t think it’s the right time.”

When BOE representatives brought the issue before the County Commission, several commissioners openly opposed the purchase; however, numerous parents of VHS students attended the commission meeting and spoke out in favor of it.

Commissioner Valerie Goins told the commission that she felt “it doesn’t send the right message” to close two schools due to budget savings while purchasing $1.25 million turf.

However, Commission Chairman Rick Brewer told the commission, “If you vote ‘no’ on this resolution, you’re saying ‘kids (the football players gathered at the meeting), you all don’t matter no more.”

In a close race, the Commission voted 13-18 in favor of turf in the end.

For more information and coverage of discussions leading up to the turf’s installation, visit the links within the online version of this article.