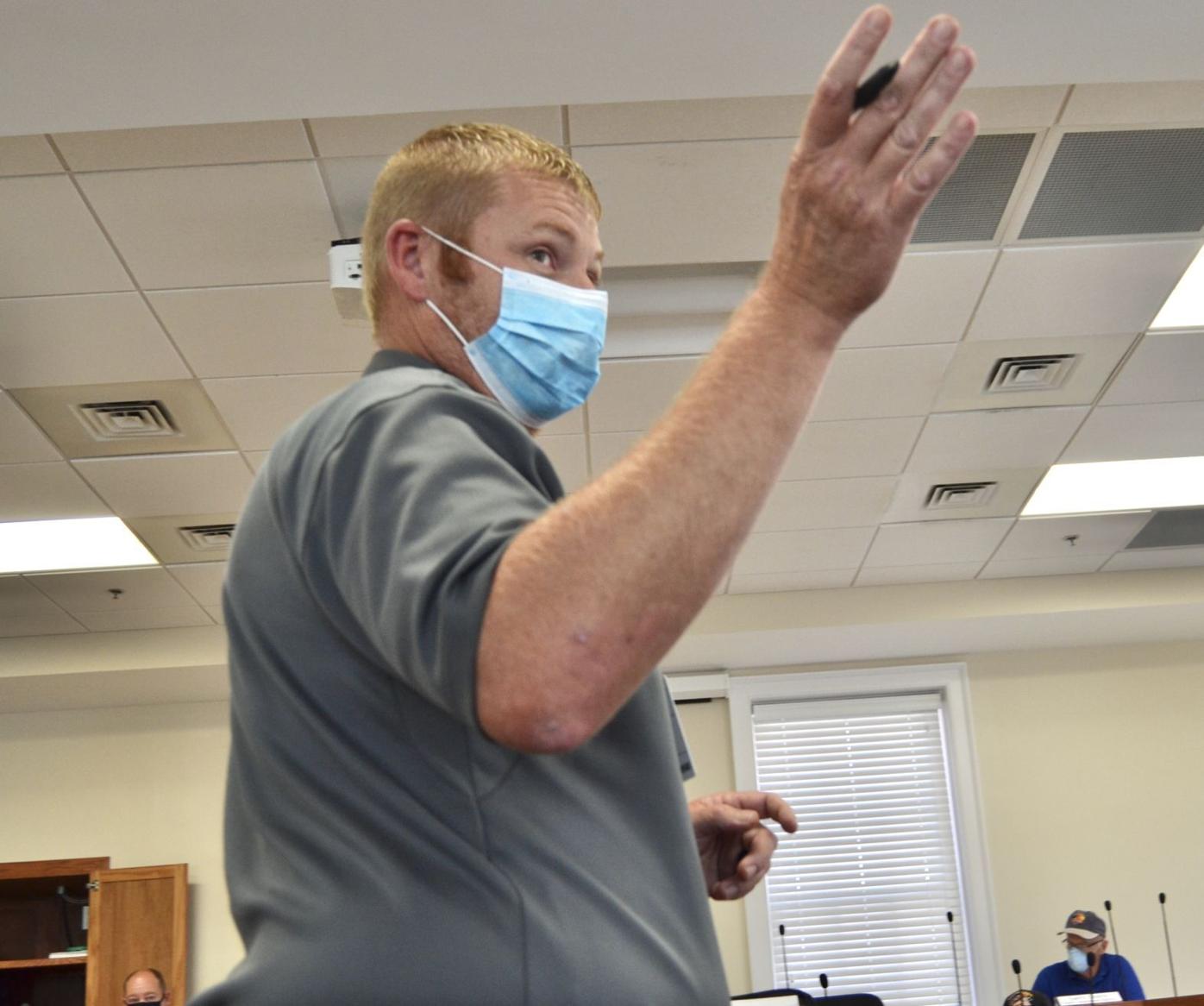 EMS Director Jason Murrell explained to the committee what all goes into equipping a first responder with an AED. 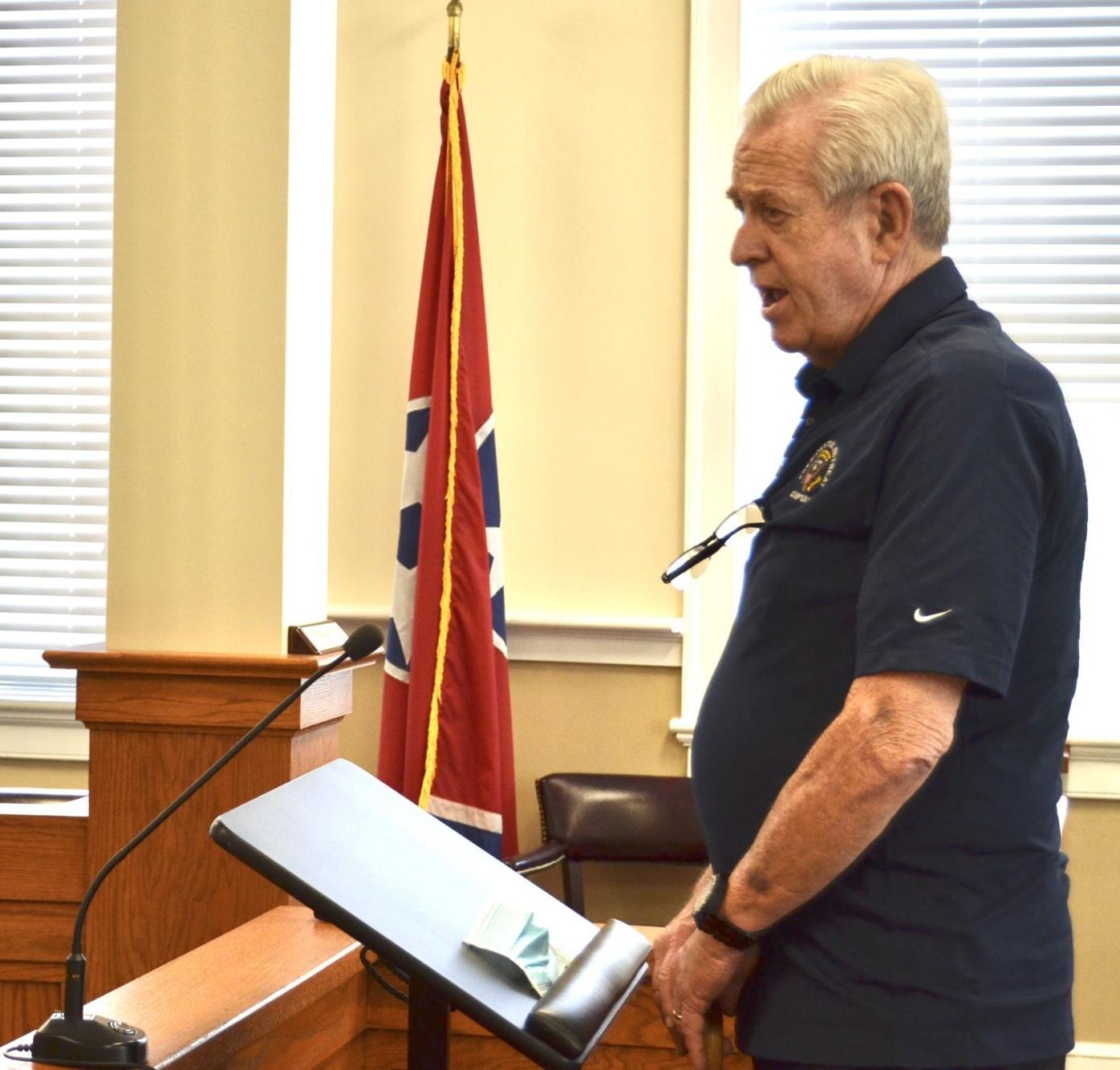 EMS Director Jason Murrell explained to the committee what all goes into equipping a first responder with an AED.

This plan came after the commission voted during August’s meeting to allot $100,000 from the Governor’s one-time $1.176 million COVID-19 Local Support Grant (LSG) for this purpose.

As the Review has previously reported, a local group of interested citizens formed the Improving Life Safety Committee (ILSC) around a year ago to discuss ways to improve life safety in the county. The major concern discussed was the need for additional first response to life threatening medical emergencies within the county; thus, the committee began working to encourage the commission to purchase AED’s and place them in all emergency response vehicles.

Originally, the motion that was made and passed at the Commission’s August meeting was worded such that AED’s would be placed in ALL county-owned vehicles, with an amount not to exceed $100,000.

However, after a discussion at the Sept. 11 Public Safety Committee meeting, the committee noted that AED’s may be necessary in areas other than JUST county-owned vehicles. Thus, the PSC formed the aforementioned special committee that will determine where these AED’s will be placed.

That committee will be comprised of Hawkins County Emergency Management Agency Director Jamie Miller, members of the PSC, and representatives from the sheriff’s office, volunteer fire departments, rescue squads and Hawkins County EMS.

County commission approval will be required to expand the AED deployment to non-county vehicles.

“The EMS committee that was appointed in 2019 identified that the minimum requirements for EMS in this county is nine staffed units (ambulances), and there are not nine staffed units in Hawkins County EMS,” Bill Killen told the Committee.

Killen is the Chairman of the Improving Life Safety Committee (ILSC), and his fire service career spans 65 years.

“There are areas in the county where you couldn’t get an EMS unit within 10 to 12 minutes, and, in some cases, a little longer,” he told the committee.

He explained that it was after this information was discovered by the EMS Exploratory Committee that the ILSC was formed. Killen said that the ILSC originally suggested that AED’s be placed within law enforcement vehicles and fire stations.

Killen told the PSC that Mount Carmel PD already has AED’s within their vehicles, and Church Hill PD has AED’s in some of their vehicles. Several churches, businesses and medical facilities in the area also have AED’s.

“When you say ‘county-owned vehicles, I think it would be great to have one in a dump truck, but you would get more use out of it in a Sheriff’s vehicle or one of the Volunteer Fire Department vehicles,” Killen said.

He also noted that the ILSC’s goal was to put 100 AED’s throughout the county.

HCSO Lt. Lynn Campbell told the committee that between 35-40 AEDs would be needed to fill the sheriff’s patrol vehicles that are used regularly.

“They’re very simple to use”

Killen told the Committee that the particular vendor the ILSC has been in contact with would provide training on the AED’s.

“They’re very simple and easy to use,” he said. “I like to use the term ‘firefighter proof,’ and I feel I am qualified to use that term after 65 years in the business. The instructions are there (printed on the machine), and they are very easy to follow. It’s a great device.”

He also noted that the vendor the ILSC has spoken with offers a four-year warranty on a remanufactured AED, which is available for under $500 each. New AEDs can cost as much as $2,000 apiece.

AED’s also come with a recurring cost to replace the attached pads when they expire.

“They trained their community in CPR and AED’s and put these on almost every streetcar,” he said. “Over a period of around two years, the number of cardiac arrests that resulted in death decreased almost 60%. AED’s are so easy to use that I could hand it to my 10-year old and he could pretty well figure it out. If you can look at pictures, you can work an AED to save someone’s life.”

“It can be incorporated with the 911 center,” he said. “It locates AED’s so that, if there is an issue, it can identify where there is an AED closest.”

As far as the county’s liability on the AED users, Killen said, “I am not an attorney, but I believe there is no real liability. It comes under the Good Samaritan Law.”

Miller told the committee that, by law, the AED program must be run under EMS.

EMS Director Jason Murrell noted that he spoke with the area’s Regional EMS Representative, who stated that, “for the responder who is equipped with an AED and is dispatched on a 911 call, we would have to have a First Responder Agreement, which is also known as an MOU, detailing what they will respond to, spell out who will maintain the AED and the supplies, who will check them monthly for in-date supplies and good batteries, whose insurance covers them and their general liability, and who is responsible for training.”

In addition, the responder would need to complete training that is approved by the County’s medical director annually and submit a list of everyone who will be using the AED each year. Each AED location must also be filed with 911 Central Dispatch.

“A lot of that is based on how you set up the system,” Murrell said. “If they are dispatched by 911, then there is a lot of agreements that have to be reached and a lot of paperwork and training records kept on file.”

Each individual agency that maintains an AED would be responsible for this.

Commissioner Bob Edens, who chaired Friday’s PSC meeting, asked what would happen if a responder came upon an incident that required an AED but hadn’t been dispatched by 911.

“That would fall back on that agency’s general liability insurance,” Murrell said.

Edens also told the committee that the county hasn’t received the LSG funding yet, saying, “this [project] isn’t going to happen tomorrow.”

However, County Finance Director Eric Buchanan told the Review at the end of August that his office discovered that the county had the money on Aug. 27, though the county had had it longer. The money goes to the Trustee’s office and not directly to Buchanan.

Since the resolution as approved by the Commission specified that the AED’s would go inside “all county-owned vehicles,” that did not include the vehicles owned by EMS, the Rescue Squad or the various volunteer fire departments.

“There may be other locations where these may be vital as well, such as the jail or courthouse,” Miller said. “There probably needs to be an assessment as to where the true needs are. Bringing this program to the public will be very beneficial, but there’s a whole lot of work still to be done.”