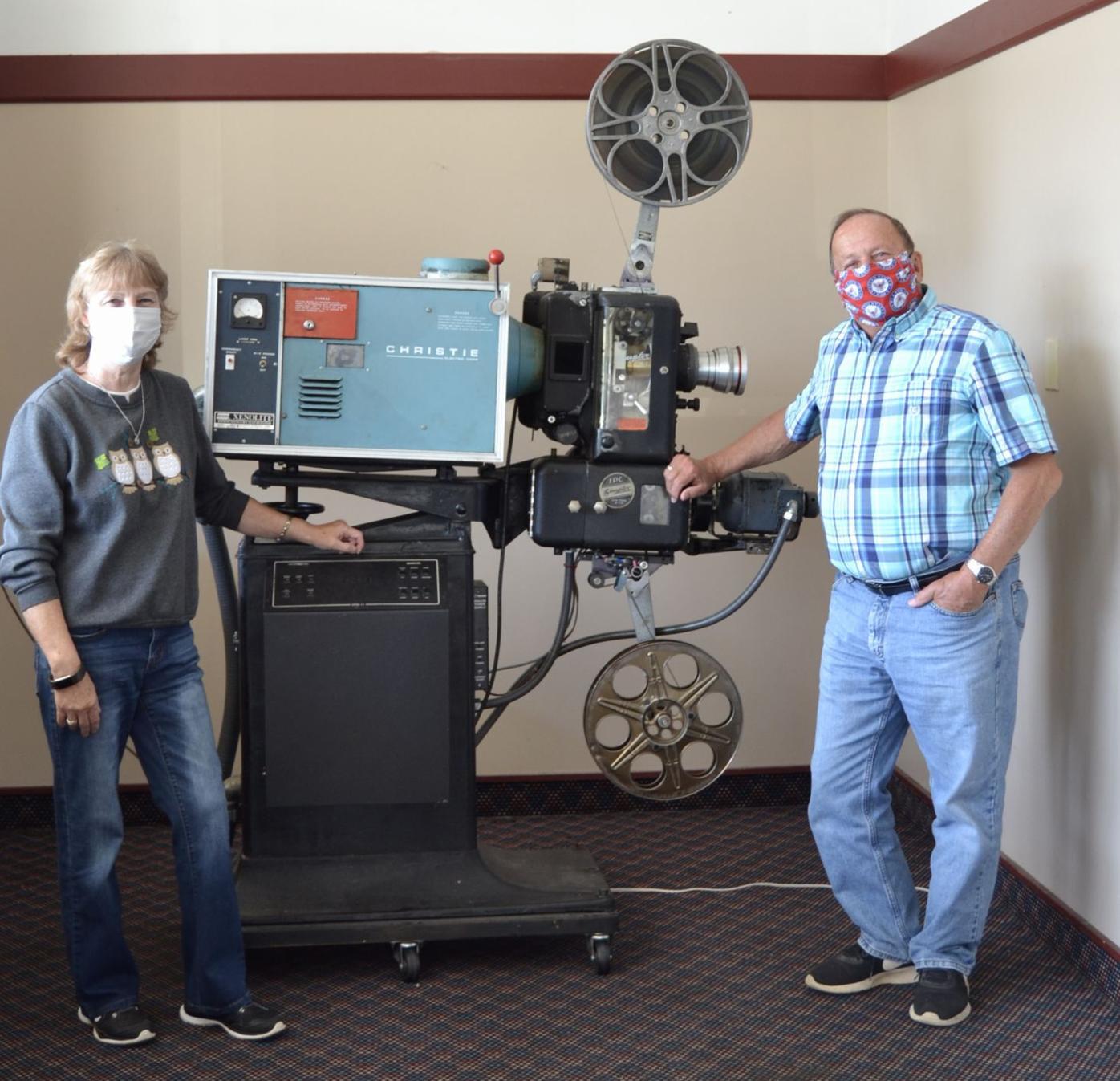 Kathy (left) and Larry (Maysilles) stand next to one of the old 35mm projectors that originally played movies in Cinema 4. 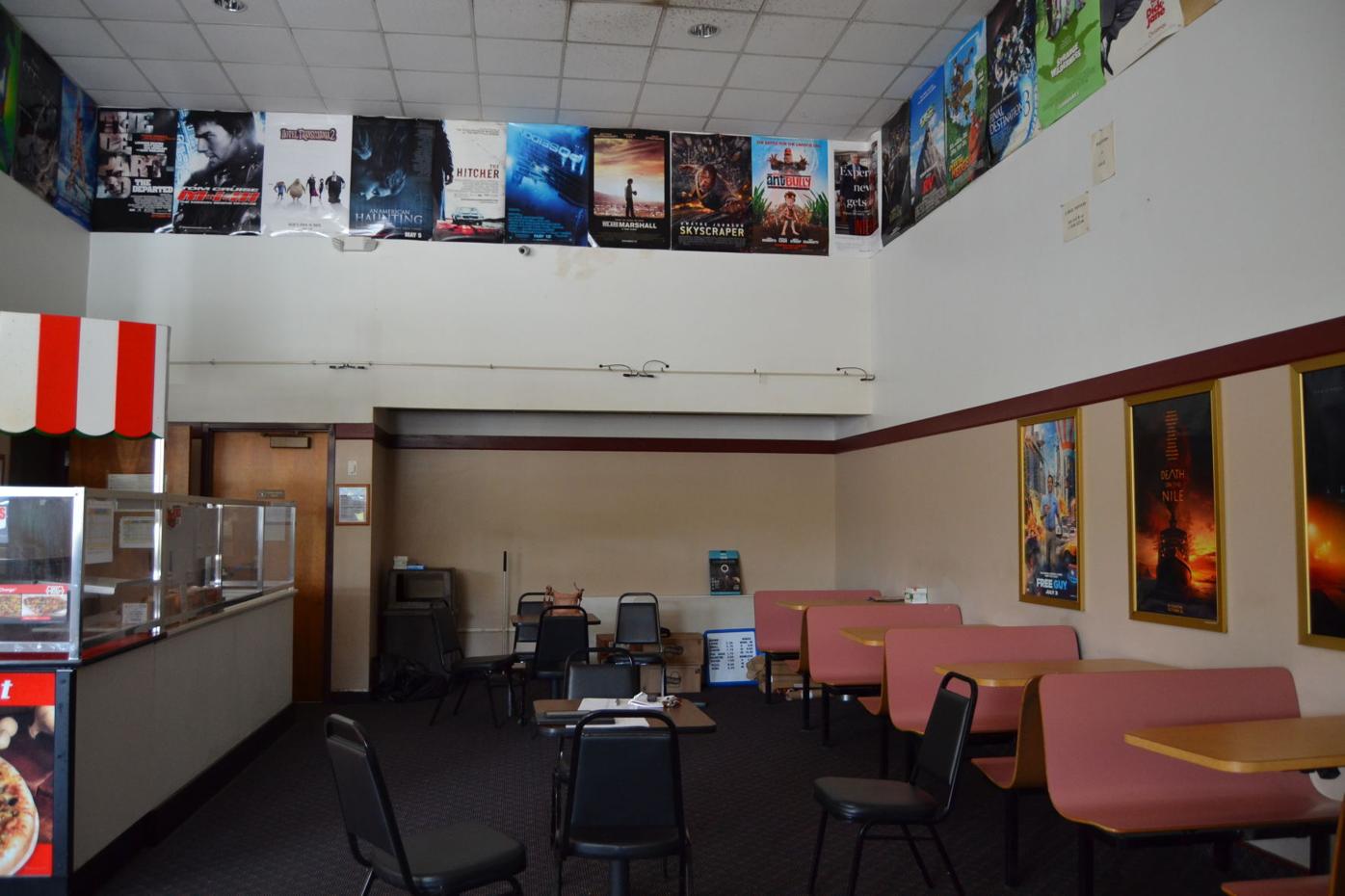 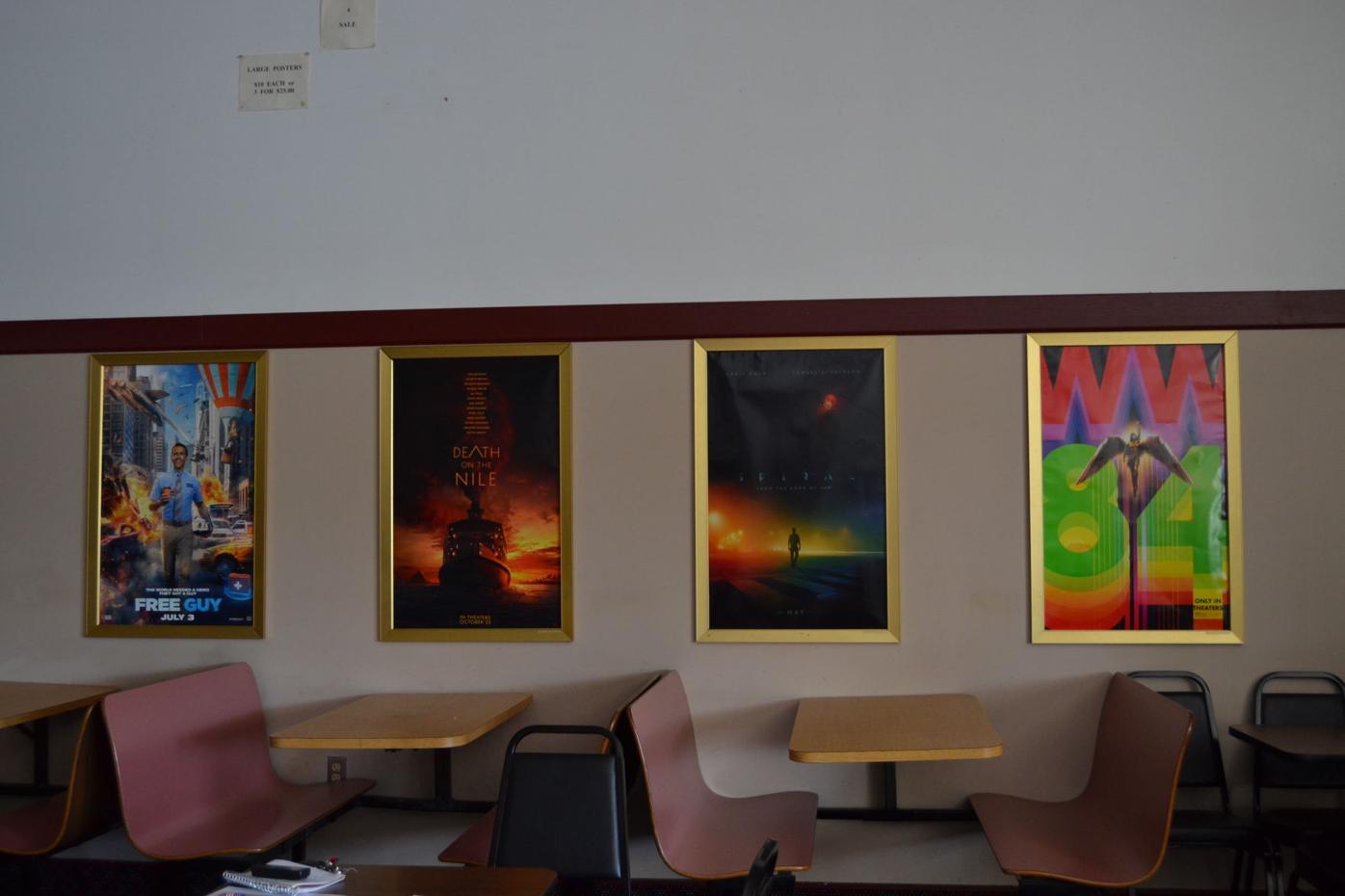 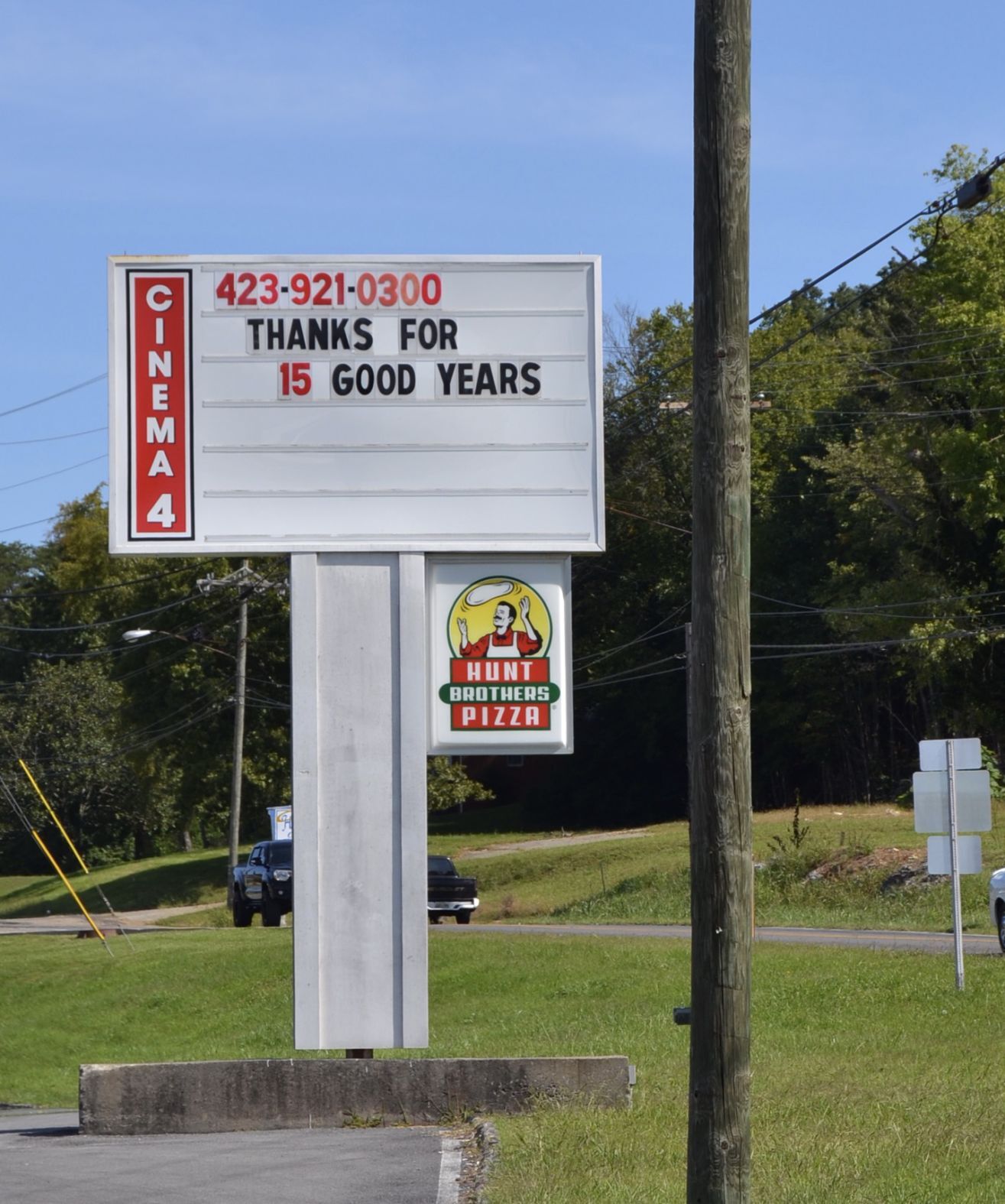 Kathy (left) and Larry (Maysilles) stand next to one of the old 35mm projectors that originally played movies in Cinema 4.

Rogersville’s much beloved movie theater, Cinema 4, closed its doors on September 18 after 15 years of providing family-friendly entertainment to the community.

Though owners Kathy and Larry Maysilles told the Review that they will look into reopening in around six months, they explained that COVID-19 has had such a devastating impact on business that they are simply not financially able to remain open right now.

Though the Maysilleses told the Review that they are heartbroken to have to close their business, they reflected on the meaningful bonds they have made with members of the community in the past 15 years.

In fact, when asked what they will miss most about Cinema 4, both Kathy and Larry said without missing a beat, “we will miss the people most.”

“I always wanted a movie theater”

Both Kathy and Larry Maysilles are retired teachers, originally from Michigan, and moved to Rogersville in 1997.

During their time in Hawkins County, Kathy taught first grade at St. Clair Elementary for several years. Larry taught at a vocational technology center while living in Michigan and also worked at Cherokee High School as a behavior specialist for three years and a math teacher for one year.

Cinema 4 originally opened around 1995 and operated until its previous owners closed it in 2005.

The business had been closed for around a month when Larry found out about it.

“Larry was at a CASA (Court Appointed Special Advocate) meeting, when he heard people talking about ‘did you hear that the theater is closing?’” Kathy said. “Larry asked, ‘what theater?’ and was told ‘the one right in Rogersville.’ So, he got on the phone, talked to Food City (who owns the building that houses the theater), and the next thing you know….”

“From the time I was a little boy, I always wanted a movie theater—don’t ask me why,” Larry said with a laugh.

The couple actually already had a business plan ready to go when they heard about the theater coming for sale. In fact, the couple had originally planned to open their own drive-in theater, but they weren’t able to get permission to build the theater from the necessary local authorities.

“When we were negotiating with K-VA-T (parent company of Food City), they asked me if I had any experience with a movie theater,” Larry said. “I said, ‘none.’”

But, the Maysilles made it work.

When asked if there were difficult things to figure out at first, Larry said with a laugh, “Oh, everything!”

In fact, the first time the couple tried to work the 35 mm projectors that came with Cinema 4, Larry said they ‘spliced’ the pieces of film together for a movie (which was necessary with this form of technology) and placed them in the projector’s ‘platter,’ the Maysilles said to themselves, “Finally! This ought to work.”

“We turned the machine on, and it screeched, howled, yelled, ripped things apart and bent brackets,” Larry said with a laugh. “We looked at each other and said, ‘well, that wasn’t right.”

Once they reopened in June, however, their numbers never rose back to where they were before the pandemic, instead, ranging between 200 and 300.

“We’ve been hanging on by our fingernails, trying to make it go and we just can’t do it,” Larry said. “We had a good reserve, but we’ve gone through that. We also had a grant for payroll that we went through. We’ve been trying really hard, but it is all gone. We’re making about $500 a month right now, and it’s costing us about $2,500 a month to stay open. Though we don’t blame people. The people of Rogersville and Hawkins County have been wonderful to us.”

The couple also explained that, due to the pandemic, many movie producers pushed back release dates for movies that were originally scheduled to be released soon. Because of this, Cinema 4 only had older movies in the few months that they were open during the pandemic.

“We will miss the people most of all”

“We’ve really enjoyed it,” Larry added. “It’s been really good for us, and, hopefully, it has been good for the community.”

She explained that the main reason she and Larry took on the theater was for the community.

“We knew this was really all there was to do in Rogersville—there was just the Cinema,” she said. “When we opened it, we would get a lot of people saying, ‘this is the only [movie theater] we will go to—it’s too far and more expensive at others.”

When asked what part of the business they will miss the most, both Kathy and Larry immediately said, “the people.”

“We’ve enjoyed it,” Kathy added. “We’ve developed relationships with people who come in, and we had regulars. We’ve enjoyed the employees, too, because they’ll come here when they’re about 16 years old, work through high school and college. They’re not really employees—they’re more like our family.”

As former educators, Kathy noted that she and Larry always tried to encourage their young employees to do their best in school.

“We would even encourage them to do their homework here once their work was done,” she said.

“I think one of the things I will miss the most is that this was the place kids would come for their field trips from school,” Kathy said. “The months of April and May were just so busy! I loved seeing the little kids come in to see a movie. Some of them would tell me they had never even been to a theater before.”

Cinema 4 truly offered something for all ages, as they even hosted a ‘Senior’s Day’ on the second Wednesday of each month, where the theater would play a ‘classic’ movie that local senior citizens might remember from their childhood.

They hosted the annual Christmas party for ABB, which is commonly referred to in Rogersville as the “Dodge plant” and previously known as Baldor. They were also a host to many children’s birthday parties through the years.

Review Staff Writer Allison Goley actually made many memories at Cinema 4 growing up in Rogersville. As an elementary school student, at Rogersville City School, Goley saw the animated movie “Spirit: Stallion of the Cimarron” at Cinema 4 in 2002 as part of a school-sponsored event rewarding students for reading a certain number of books.

A few years later, Goley saw the John Wayne movie “Operation Pacific” with her grandmother and younger sister as part of the monthly “Senior’s Day.”

Goley even went on her second date at Cinema 4 with the man who would eventually become her husband. The pair saw “Pirates of the Caribbean: On Stranger Tides.”

Kathy told the Review that she thought many customers kept coming back because of Cinema 4’s prices.

“We’ve NEVER changed our prices in 15 years,” she said. “This was a community thing, and it wasn’t about the money for us.”

“We’re both retired, so we didn’t really need the money,” Larry added. “We were in it for the kids, the community and the fun.”

Spared at the 11th hour

Readers may remember that Cinema 4 was nearly forced to close once before.

The Maysilleses purchased Cinema 4 with four 35mm film projectors used to play films and used these projectors until they, along with many other small theaters, were forced to make the switch to digital.

Around 2013, the big filmmakers, who were changing the way movies are produced and distributed, told theatres to make the switch to digital or stop showing their motion pictures.

Unfortunately, purchasing the new technology necessary to play digital films was going to cost Cinema 4 around $200,000.

The Maysilleses were encouraged when members of the community rallied around their small business by holding a variety of community fundraisers, from dances, to car washes, to bake sales, to a run/race, to concerts with performers such as legendary singer/songwriter Benny Wilson. However, by August of 2014, they were $51,000 short and had to call their landlords to let them know that they would moving out.

Thankfully, Cinema 4 was able to secure enough donations within the next few weeks that they were able to make the switch to digital and remain open.

“Thanks to the community, the silver screen is not going dark,” Larry told the Review at the time. “Thanks to you, we did it!”

The Maysilleses now keep one of the original projectors in the lobby as a nod to days past. They told the Review with a laugh that many customers will even pose for photos next to it now.

The Maysilleses don’t plan to give up on Cinema 4 just yet, though. In fact, they explained that they have been working with K-VA-T, who own the building where the cinema is located, to make sure that if/when the couple is financially able to reopen, they will be able to do so.

“[K-VA-T] asked, if we closed down for six months or so, would we be interested in coming back and running it again,” Kathy said. “We told them we would be—we would at least talk about and see what the situation is at the time. We’ll definitely consider reopening again at that time, but whether it’s feasible or not, I don’t know.”

When the Maysilleses announced on the Cinema’s Facebook page that they were closing, they received 85 comments and over 300 ‘shares.’ In many of these comments, community members were asking what they could do to help the theater remain open. Many even offered to donate money or set up a fundraiser.

When asked if a fundraiser could help keep the theater open now, Larry told the Review, “That COULD be helpful in the future. It just depends on the circumstances in six months. Can we open? What is the government saying? How much money will it take to open? Everything is just up in the air right now. IF we can open back up, we will.”

“We’ve got all of our projectors on ‘standby’ mode to keep them current,” Kathy said. “They’re on ‘standby,’ and I guess we are too.”