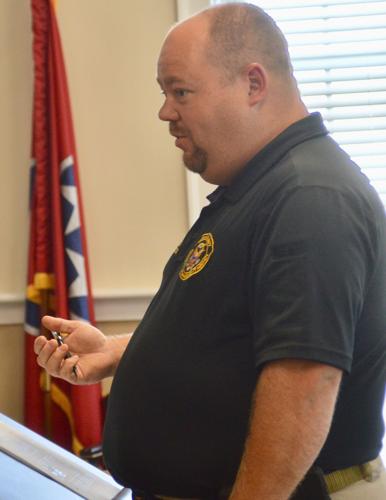 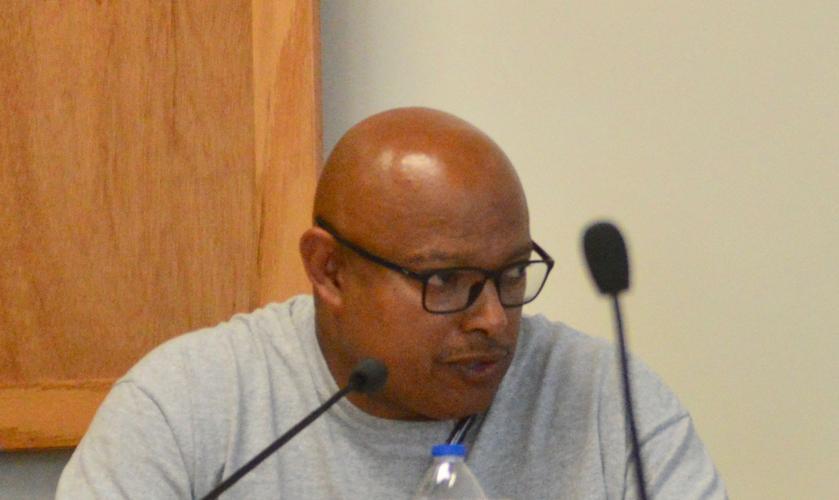 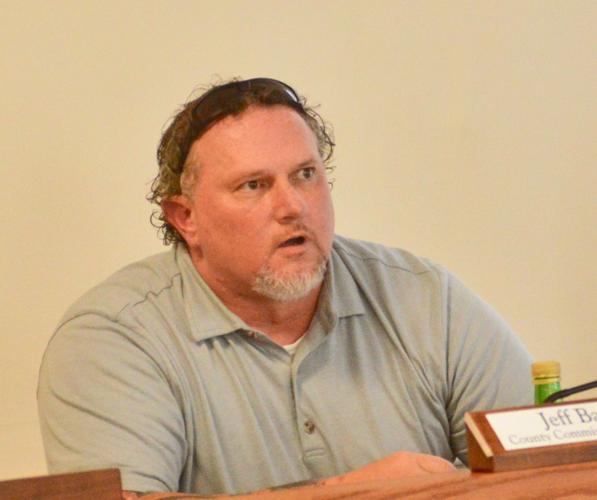 Commissioner Dawson Fields’ temper flared as he questioned Miller. “I for one am sick and tired of being blamed for something, and we (the commission) got told to wait (on working on the radio replacement),” Fields said.

Commissioner Dawson Fields’ temper flared as he questioned Miller. “I for one am sick and tired of being blamed for something, and we (the commission) got told to wait (on working on the radio replacement),” Fields said.

Once again, the failing emergency communications equipment in Hawkins County was the topic of a recent heated exchange at the July 21 Public Safety Committee meeting.

Both Fields and Commissioner Mike Herrell told responders that they were tired of the Commission being blamed for these issues, stating that the commission had already recommended that the current failing system be "band-aided" until a permanent solution could be found.

EMA Director Jamie Miller explained that the replacement analog system has been ordered. Pursuing grant funding and product shipping delays brought on by the COVID-19 pandemic have delayed implementation of this replacement system.

Tempers flared at the meeting, but miscommunication seemed to be the biggest issue, as commissioners repeatedly questioned Miller about this delay.

How did we get here?

Back in July of 2020, the Committee voted to choose the quicker to install and less expensive analogue option to replace the emergency communications equipment that has been malfunctioning since November of 2019.

This decision came after months of back-and-forth and consideration of many different replacement systems that ranged in cost.

In September of 2020, the commission approved the $425,000 project cost 20-1, and, the following October, the county received word that their application for the $250,000 emergency Community Development Block Grant was approved in full.

The county officially received state approval for this grant on Jun 10, 2021.Thus, the county will only have to pay $175,000 for the new system.

Numerous first responders have noted that there are currently large dead zones throughout the county, particularly in the Clinch Mountain and Beech Creek areas. Responders on opposite ends of the county also have reported having trouble communicating with one another.

Miller told the Committee on July 21 that he estimates the replacement analog system will be delivered in approximately 10 weeks, which will be the last week of September.

He noted that the delay in delivery is due to a worldwide semiconductor shortage.

“This (shortage) is an industry-wide issue,” Miller said. “Just like with automobiles (and the current shortage of them), the semiconductor shortage is causing the delays.”

When further questioned, Miller explained that the CDBG grant also caused delays with beginning the project. Although the county had received word in Oct. 2020 that they were approved for the grant, they didn’t “have the go-ahead” to begin the project until June 10.

Miller noted that the Bays Mountain tower will be the first to receive new equipment with Town Knob next and Short Mountain after that. Then, a new tower will be installed on Clinch Mountain.

The analog system to be installed will also have the capacity to be upgraded to digital.

“That will vastly improve coverage,” Miller said of the new analog system. “We did some installs of antennas on Short Mountain just to do some testing without new equipment, and it vastly improved the coverage of those sites. The problem that will linger will be the connectivity between the sites. All that’s required once this (replacement analog system) is installed is a software update into the repeaters and then the end-user devices in the field for the departments that are on DMR in order to connect all those sites together if we decide to go DMR.”

DMR was one of the options the commission considered to replace the failing system that was initially ruled out due to the cost. However, Miller and commissioners have mentioned considering this system in the future.

Several emergency response representatives told the committee that they experienced radio communication issues during the 13-day search for Summer Wells in the Beech Creek area.

To aid in communication, mobile sites from both TACN (Tennessee Advanced Communications Network) and FirstNet were brought in, and Sullivan County EMA and TEMA provided around 50 radios to the searchers on the scene.

“When I took my position at Church Hill Rescue Squad as a captain, one of my main responsibilities was the safety of my people,” CHRS Captain Tim Coup told the committee. “(With the TACN system) I had no issue knowing my people, those 1,194 searchers who were there, law enforcement included, I knew where they were and I had accountability for them. The TACN system, that is something this county needs to look into. I understand there’s a dollar sign there, but I do not believe any of you guys standing here can put a dollar sign on one person’s safety.”

TACN is actually an option they had previously considered and ruled out primarily due to the high cost.

County Mayor Jim Lee later released a statement shortly after the meeting noting that TACN only works in the Beech Creek area if this mobile site is brought in.

Commissioner Jason Roach asked Miller what difference it would have made in communication ability if the new analog system had been up and running during the search.

“I feel like every time something happens, we start getting blamed for radios,”  Herrell said. “The way I look at it, we can’t do anything about radios until we see a resolution or something come in front of us to decide what to do on the radios.”

“The county commission was pretty much told to step out of this and that it was not our problem or job to deal with radios,” Fields added.

“That has not been said by me or my agency,” Miller replied.

“I personally don’t give two s---- who gets the blame and who don’t,” Fields said. “This is about the little girl who is missing. But we don’t know radios. We’re waiting on someone to tell us to get this or get that. We were told a long time ago that we don’t have anything to do with this.”

“You don’t leave something broken until you can figure out what to do,” Fields said, consistently raising his voice. “At least a band-aid is better than nothing...we should have done that a long, long time ago. We shouldn’t even be dealing with this right now. We should have already fixed it….that’s not even defendable.”

He added, “We made the motion to do it, and it just stalled out. Nobody did anything even though the motions were made by this body who keep getting blamed. I for one am sick and tired of being blamed for something, and we got told to wait. You guys need to be safe. That is our main priority... But we were told, you guys stay out of it, keep your mouth shut.”

In response, Miller again explained that equipment for said replacement system has been ordered but was delayed due to the CDBG grant and part shortages.

“We don’t have to take abuse from commissioners”

Shortly after the meeting, Lee released a statement saying that his employees “do not have to take abuse at the Commission meetings.”

“They are being instructed to kindly walk out of the meeting if this happens again,” he said.

He further stated that Field’s suggestion that the county “band-aid” the failing system was “ridiculous.”

“When our system went down, it took us several hours to get in contact with our previous radio vendor,” Lee wrote. “They wouldn't even come out that night. They then told us they would have to ship our microwave unit overseas and weren't even sure if that was the problem. We also found where they were billing us for services that they hadn't performed! I then terminated the contract.”

He added, “Stop listening to these people that have no idea what they are talking about! Unfortunately we have a few County Commissioners that try to make everyone else look bad in order to try to make themselves look good.”

Lee also explained that his agency is proposing to use the $509,858 that the county will receive from the Governor’s Local Government Grant to buy public safety personnel portable and mobile radios.

Check your email for details.

Submitting this form below will send a message to your email with a link to change your password.

An email message containing instructions on how to reset your password has been sent to the e-mail address listed on your account.

Your purchase was successful, and you are now logged in.

A receipt was sent to your email.