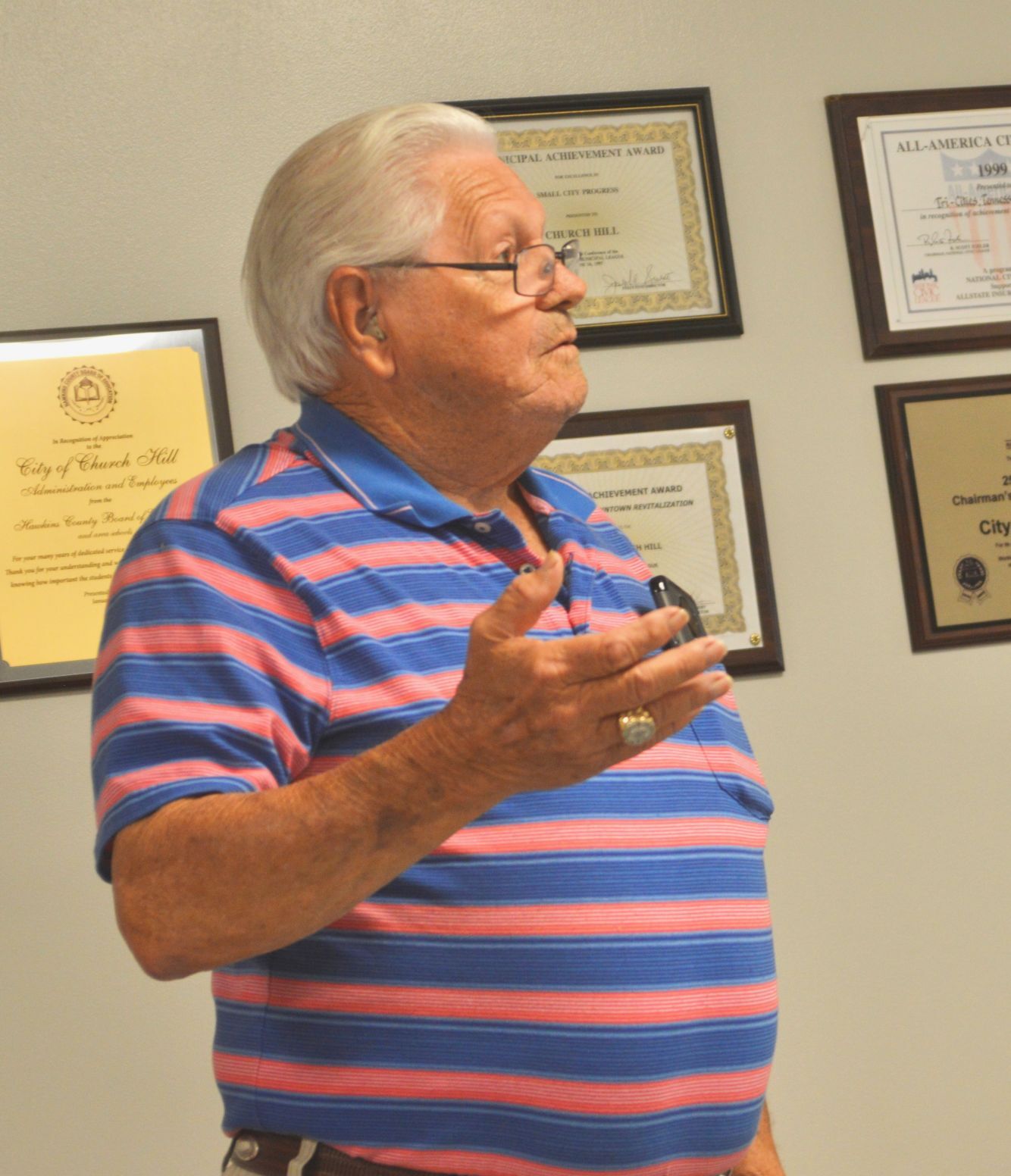 Former longtime Church Hill Mayor Billy Kyle Housewright encouraged the BMA to study the pros and cons of hiring a city manager before striking down the idea. “I’m sure the whole board’s intent is to make Church Hill a better place,” he said. “It’s possible that this (a city manager) could be better.” 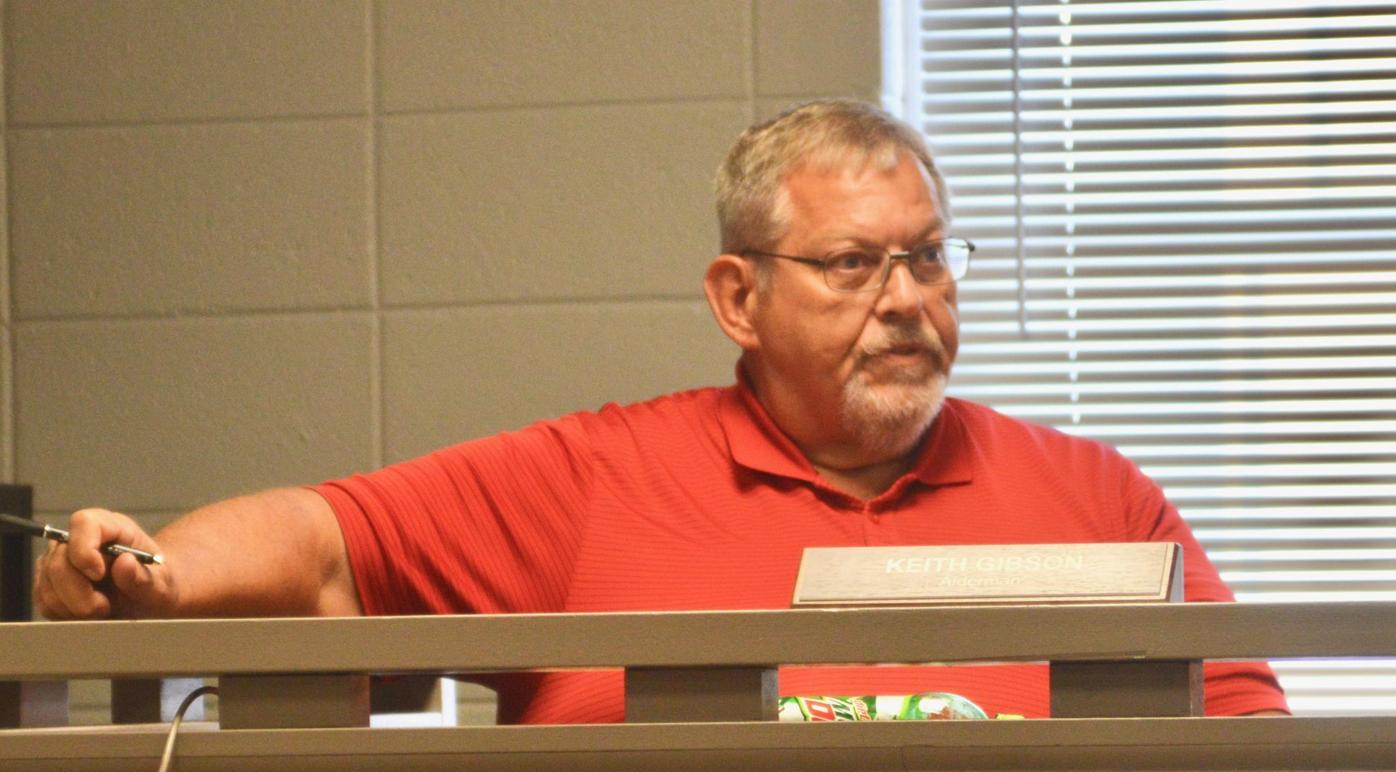 Alderman Keith Gibson seconded the motion to transition to a weak mayor and hire a city manager. “I think it could make the city even better than what it is right now,” he said. 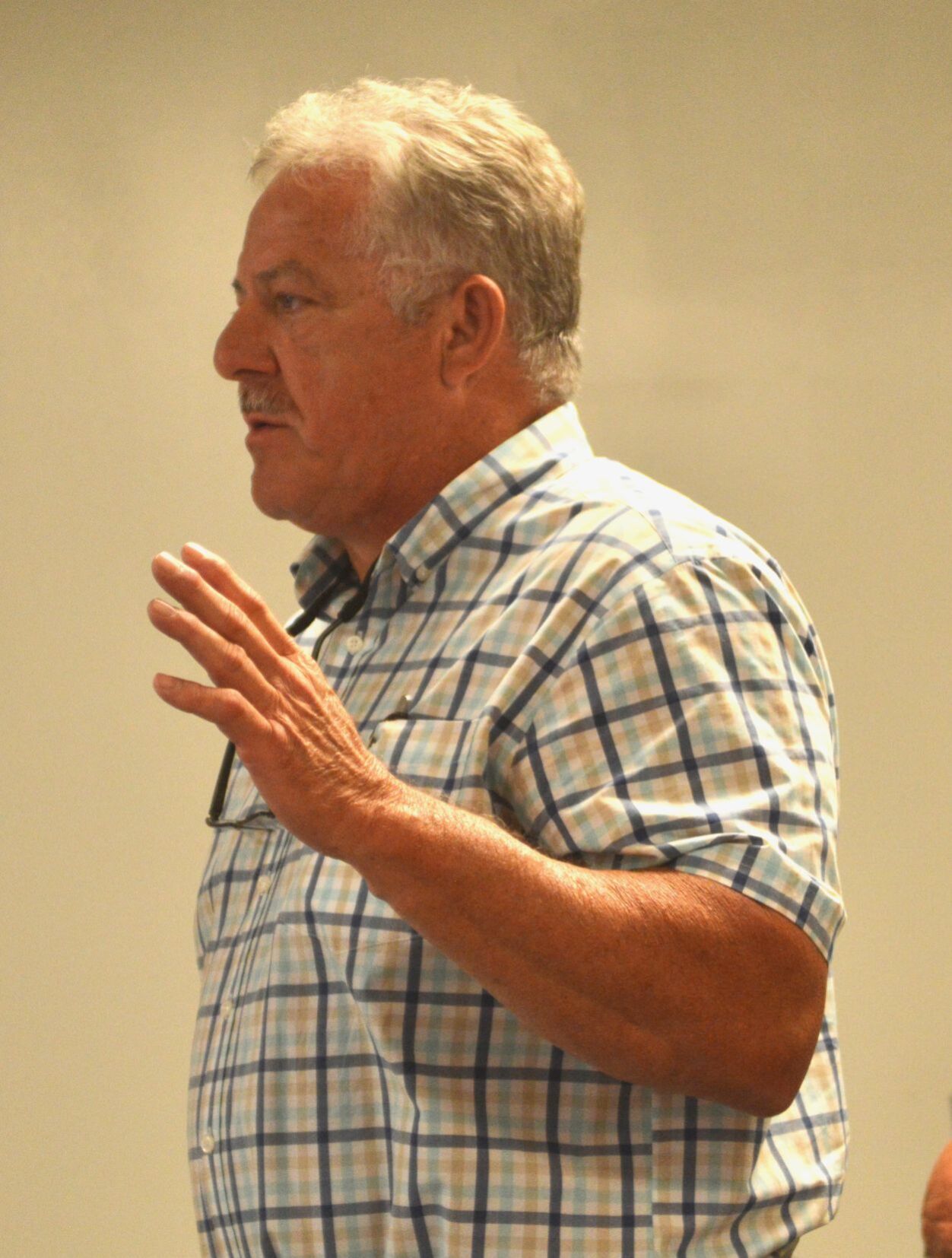 Citizen Joe Boggs questioned Alderman Kathy Christian intensely over her decision to propose an ordinance that would have transitioned the town from a strong mayor form of government to a weak mayor and brought in a city manager.

Former longtime Church Hill Mayor Billy Kyle Housewright encouraged the BMA to study the pros and cons of hiring a city manager before striking down the idea. “I’m sure the whole board’s intent is to make Church Hill a better place,” he said. “It’s possible that this (a city manager) could be better.”

Alderman Keith Gibson seconded the motion to transition to a weak mayor and hire a city manager. “I think it could make the city even better than what it is right now,” he said.

Citizen Joe Boggs questioned Alderman Kathy Christian intensely over her decision to propose an ordinance that would have transitioned the town from a strong mayor form of government to a weak mayor and brought in a city manager.

After a contentious meeting and lots of back-and-forth between Mayor Dennis Deal and several Aldermen, the Church Hill BMA voted 5-2 on June 20 to remain governed by a strong mayor rather than hire a city administrator.

Church Hill currently has a strong mayor form of government, which means that Deal handles the day-to-day personnel and business matters of the town. He also has the authority to hire and fire city department heads.

However, Alderman Kathy Christian proposed an ordinance at the town’s June 15 meeting that would have transitioned the town to a weak mayor form of government and hire a City Administrator to handle the day-to-day town business and personnel matters.

Because Christian’s ordinance was not on the June agenda, and the board did not vote to add it to the ‘new business’ section of the agenda, it could not be discussed or voted on at that meeting. It was then the only business on the July 20 agenda and brought with it nearly an hour of heated discussion.

Christian told the Review in June that her decision to propose this resolution came after an incident on May 25. According to official reports from both City Recorder Josh Russell and Public Works employee Michael Seal filed with the Hawkins County Sheriff’s Department, Deal asked several employees to sit in on a meeting that day about faulty equipment at the municipal pool.

“Dennis was agitated during the meeting and became belligerent,” Russell wrote. “Dennis said, ‘I’m pissed. I shouldn’t be here. This is becoming a full-time job. I should get a gun, shoot you all, then shoot myself.’”

After Third Judicial District Attorney General Dan Armstrong’s investigation, however, he determined that no prosecutable offense occurred and will not be prosecuting Deal.

Russell had not returned to work since the incident and was on extended sick leave until he officially resigned on July 6.

Russell’s resignation notes that his decision was made “due to the current hostile work environment that was created by an undeniable act of workplace violence.”

“There is now a breach in the mutual trust and respect that should exist among the employer and employees; and I can no longer continue working for an employer that does not value the life and safety of its employees,” Russell wrote.

Christian told the board that it was this hostile work environment that led her to propose her resolution.

Alderman Keith Gibson made the second to Christian’s motion and explained that he was in favor of hiring a city administrator.

“There’s a lot of responsibility that goes on, and it takes more than one person who works part-time at doing this,” he said. “We’re talking about a multi-million dollar budget. With a city administrator, every alderman sitting here could have more input. I think it could make the city even better than what it is right now.”

Former longtime Mayor Billy Kyle Housewright spoke up from the audience and proposed that the board study the pros and cons of a city administrator rather than hastily dismissing the idea.

However, Alderman James Grigsby spoke in favor of remaining governed by a strong mayor, saying “our mayor was voted in to be the mayor of this city.”

“I got the letter (Russell’s resignation) in the mail, and I can’t help what happened (the incident on May 25), but we’ve got to pull together or we will be hurting,” he said.

Several members of the public also spoke up from the audience and questioned Christian intensely.

“We’ve got one of the best cities in the state, it’s the safest city in the state...we have one of the best police departments, and we want to change that?” asked citizen Joe Boggs from the audience. “This system of management has worked for this city since its inception.”

In response, Christian began to read a portion of Russell’s resignation letter. Deal struck his gavel and said to Christian, “you’re out of order.”

“You are not going to shut me up,” she told Deal in response.

“So we’re going to change the entire history of this city because we’ve got one or two disgruntled employees?” Boggs asked.

He then pointed to the fact that the town has a Personnel Committee to which town employees can speak if they feel they have been treated unfairly.

Christian read a quote from an anonymous employee, who said that Deal told him “I will fire you, and, if the board hires you back, I’ll fire you again.”

“At this point, the Mayor has the ability to fire anyone that he chooses to,” Christian told Boggs. “Yes, we have a personnel committee, but he doesn’t have to go by the committee.”

In response, Alderman Michael Walker, who is a member of the personnel committee, told Christian that, in his experience, Deal always asks for their recommendation and follows it.

When Christian again read from Russell’s resignation letter, Deal claimed that Russell “wasn’t doing his job” before he resigned.

“It’s interesting that you have this evidence now, but, up until he resigned, there were absolutely no problems with his job,” Christian said.

Deal claimed that Russell was supposed to have obtained a CMFO certification when he was hired and had not done so as of the day he resigned. Deal and several other aldermen also accused Russell of “copying and pasting” previous years’ expenditures into each new year’s budget rather than adding in new information.

However, Russell told the Review that he was in the process of completing CMFO courses through MTAS at the time he resigned. He had two years to complete these courses from the time he was hired, but this window of time was extended because the courses were temporarily suspended during the COVID-19 pandemic.

“The mayor was well aware of that...and every time I had completed a course, I gave him a copy of the certificate of completion,” Russell told the Review.

In response to the accusations that Russell was “copying and pasting budgets,” Russell told the Review, “ If you look historically at the last several years’ budgets, there are some numbers that stay the same…”

He added, “They (the board) are very aware of these budgets. They go through multiple budget workshops so they see it, and they go through two readings. If they don’t like it, they can change it or they can vote ‘no.’”

The board approved the budget on first reading in May and on second reading in June.

“You would think Jerry Springer is writing this show”

After Christian read several quotes from employees who claimed that Deal had threatened to fire them, Deal denied these claims.

“I have sat up here for a few months and been quiet, but this woman is not telling the truth,” he said.

Deal then asked questions of several city employees who were present in the meeting and asked them to corroborate this statement.

When he asked Police Chief Chad Mosley whether or not he (Deal) told the police officers what to do, Mosley replied, “no.”

“You’ve got to really be a bad employee to get fired from this city, don’t you?” Deal asked Mosley. Mosley agreed.

“You can’t expect to ask an employee in front of you to answer a question because you can fire him if he doesn’t give the correct answer,” Christian said in response.

The discussion in the meeting became much more hostile than is traditionally the case for the Church Hill BMA, and several audience members seemed to catch on.

“I’ve never known an Aldermen meeting in Church Hill like this...this one is getting like Mount Carmel,” he said. “You would think Jerry Springer is writing the show here, and I don’t want to be in a city like that…”

Boggs also brought up a social media post written by Christian in which she claimed that Deal was under a criminal investigation by the State Comptroller of the Treasury.

Both Boggs and Deal accused Christian of lying about this criminal investigation.

When the Review reached out to the State Comptroller of the Treasury’s Director of Communications John Dunn about the matter, he replied, “The Comptroller’s office has broad authority to review government entities including the City of Church Hill. It is our policy not to comment further.”