Partial small mammal jaws from the Gray Fossil Site. On the left is a fossil packrat (Neotoma) with a comparatively low tooth crown, and on the right is a fossil rabbit (Notolagus) with a much higher tooth crown. 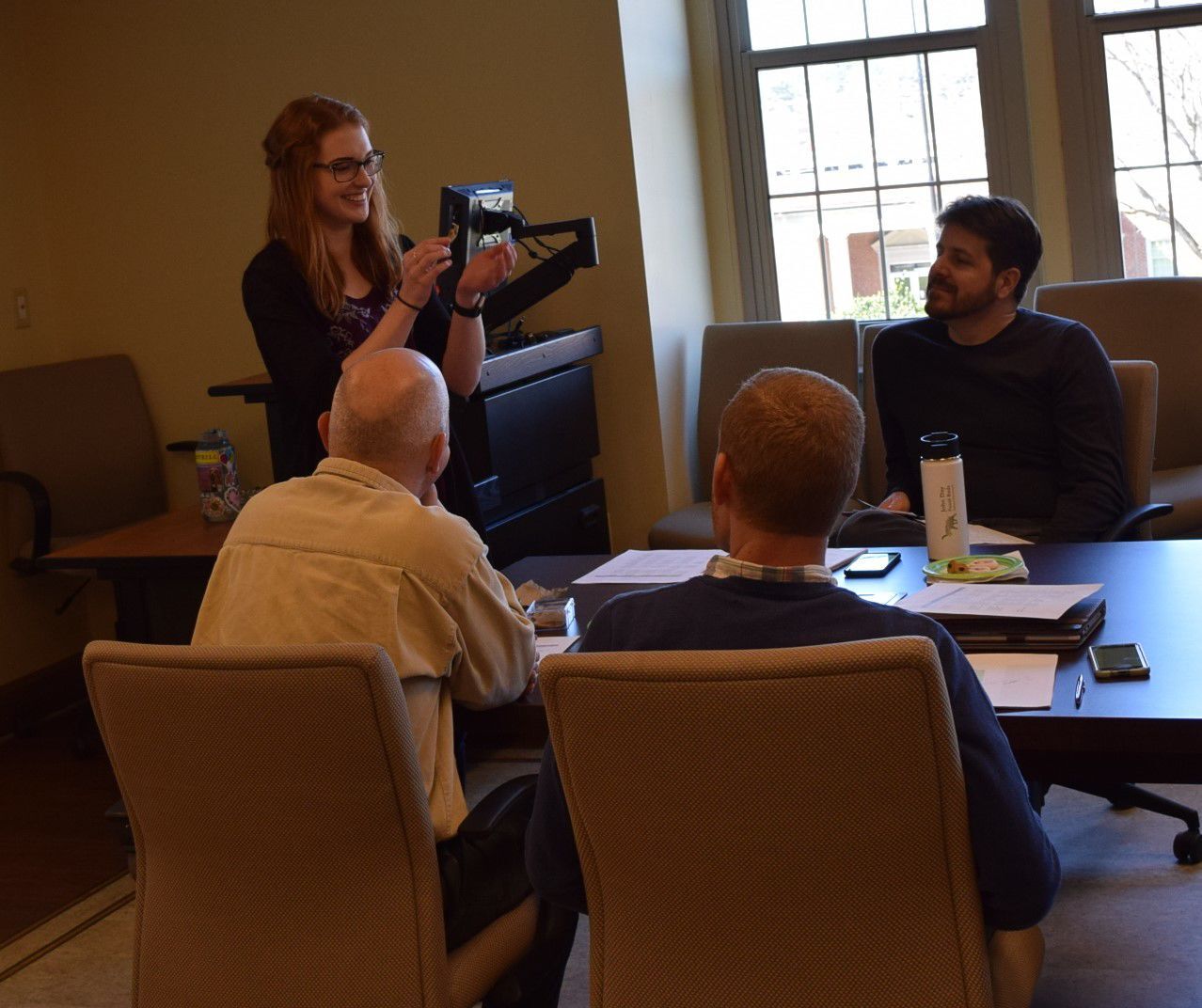 Julia Schap (top left) presented an earlier version of this research at her ETSU Master’s thesis defense. In this photo she is joined by her two coauthors, Dr. Josh Samuels and Dr. Andrew Joyner (top right and bottom right) as well as Dr. Blaine Schubert (bottom left). 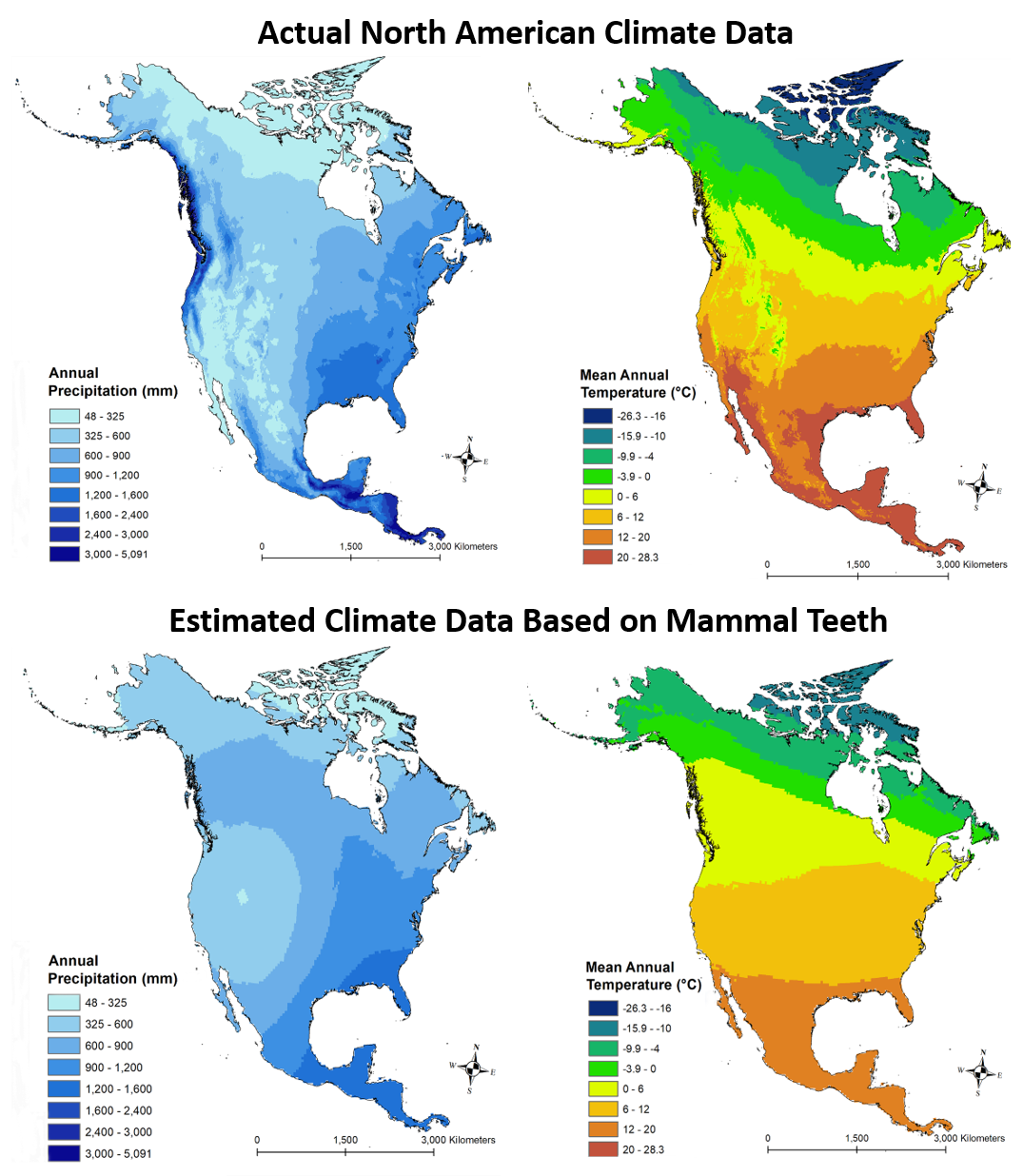 Partial small mammal jaws from the Gray Fossil Site. On the left is a fossil packrat (Neotoma) with a comparatively low tooth crown, and on the right is a fossil rabbit (Notolagus) with a much higher tooth crown.

Julia Schap (top left) presented an earlier version of this research at her ETSU Master’s thesis defense. In this photo she is joined by her two coauthors, Dr. Josh Samuels and Dr. Andrew Joyner (top right and bottom right) as well as Dr. Blaine Schubert (bottom left).

JOHNSON CITY – If you were planning a visit to Gray, Tennessee, five million years ago, you would want to dress like you were headed to Atlanta, Georgia, but pack rain gear like you would for Tampa, Florida. That’s according to an estimate of the ancient climate of the Gray Fossil Site, part of the results of a new study that uses fossil teeth to explore how climate has changed across North America over the past 37 million years.

It might not seem obvious at first, but teeth are related to climate. In any given place, the shapes of herbivore teeth depend on the local vegetation, and the type of vegetation depends on the local climate. This kind of study, measuring body parts to understand environmental conditions, is called ecometrics. But before the researchers could estimate past climates, they needed a lot of information on how teeth and climate are connected today.

The study was published in the journal Palaeogeography, Palaeoclimatology, and Palaeoecology by Julia Schap, an alumna of ETSU’s paleontology master’s degree program and currently a Ph.D. student at Georgia Tech, along with Drs. Josh Samuels and Andrew Joyner, both professors in the ETSU Department of Geosciences.

“Data gathering was a pretty time-consuming aspect of the study,” says Schap. She and her coauthors started by randomly selecting 100 points across North America. For each point, they collected information on local climate (temperature and precipitation) and the types of teeth found in the resident small mammals (mainly rodents and rabbits). Tooth shape varies in many ways, but this study focused on the height of the tooth crown, the part of the tooth that projects into the mouth and is used for biting. Tooth crowns can be tall, short, or in between, and this is related to an animal’s diet.

With all that data, they used statistical software to determine that teeth and climate have a strong relationship. So strong, in fact, that they were able to generate equations that could estimate climate, in terms of degrees of temperature or millimeters of rainfall, from measurements of local mammal teeth, such as the average crown height across species or the percentage of low-crowned vs. high-crowned species.

Equipped with these equations, all they needed to estimate ancient climate was some fossilized small mammal teeth.

In total, the authors calculated climate conditions for 73 fossil sites in over a dozen U.S. states, Canada, and Mexico, ranging from 37 million years old to less than one million years old. Altogether, these estimates reveal a trend of decreasing temperature and precipitation through time – the continent has grown cooler and drier – with various fluctuations along the way. These results match previous estimates determined using plant fossils and chemical analyses.

This technique isn’t just useful for looking at climate trends over time, but also for understanding individual fossil sites. “For example, if the site is estimated to drop below freezing temperatures,” Schap says, “then you would better understand why so many freeze-tolerant plants are found there or why you don’t have certain reptiles which cannot live in such cold temperatures.”

Among the fossil sites they examined was the Gray Fossil Site in East Tennessee, where excavations over the past 20 years have yielded plenty of small mammal teeth between 4.9-4.5 million years old. The team used those teeth to estimate a mean annual temperature of 16.8° C, similar to modern-day Atlanta, and an annual precipitation of 1343 mm, similar to modern-day Tampa. This warm and wet climate matches what ETSU paleontologists have predicted based on fossils of alligators and certain plants.

“Quite often, interdisciplinary studies (utilizing data and methods from different fields) have the potential to improve our understanding of nature in ways that would not be possible otherwise,” says Samuels. “In this case, we used geospatial techniques to help analyze biological, paleontological, and climate data, which ended up yielding some new – and easily measured – proxies for past climate conditions.”

One of the most exciting aspects of this method, the authors explain, is that it is pretty easy. Some other methods for estimating ancient climate conditions require sophisticated equipment and costly analyses. But with this method, all that is needed are a fossil site with a decent sample, 10 or more species, of small mammals’ teeth.

“We hope that any fossil site with small mammal data will be able to input this information for their site and be able to easily estimate those climate variables for themselves,” says Schap. “Seeing how whole communities have physically adapted to a wide range of climates can help us better understand what to expect in future communities given modern climate change.”