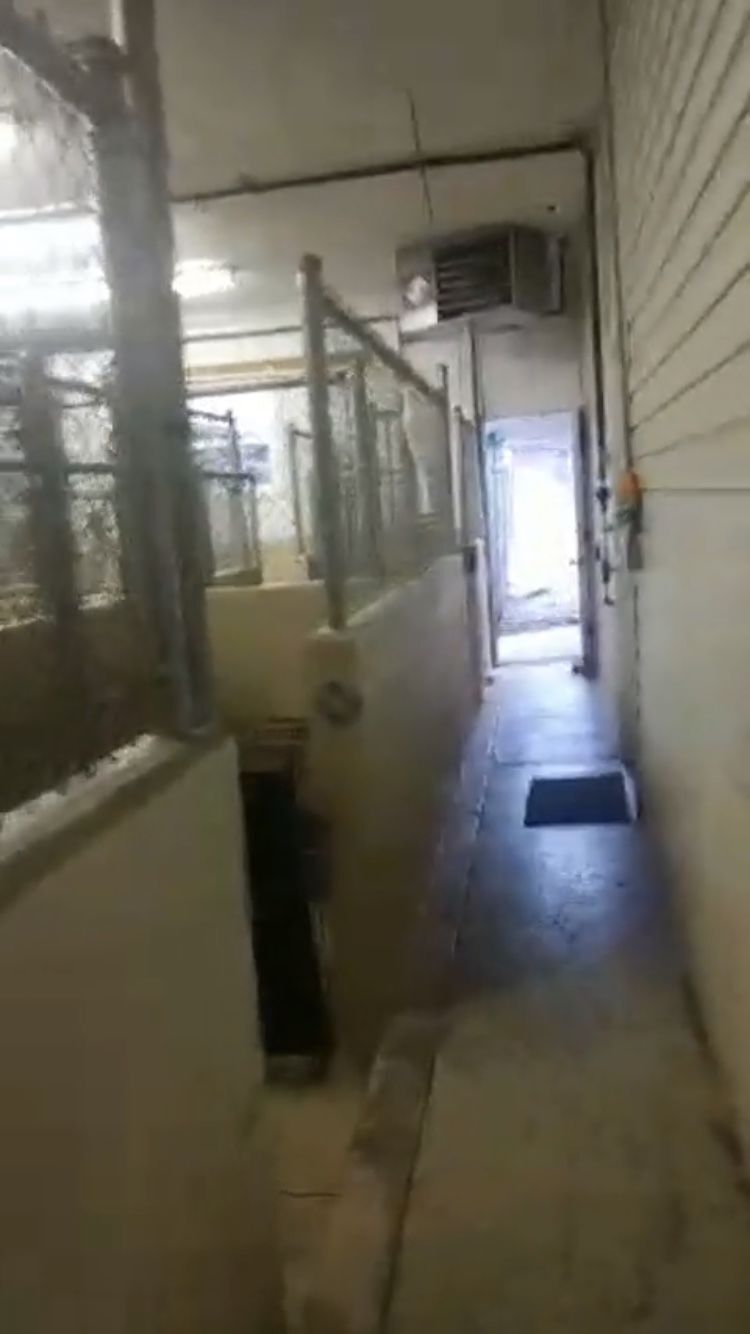 Tabitha Hicks, who is a part-time employee at the Mount Carmel Animal Control facility, took photos and videos of the inside and outside of the facility for interested viewers to see. 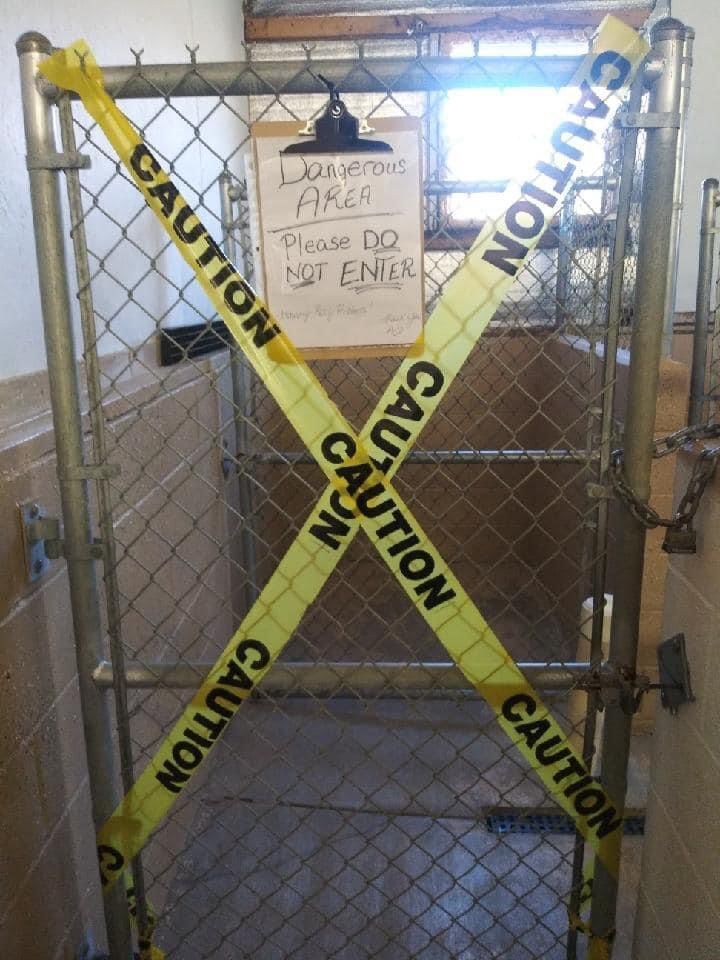 Tabitha Hicks, who is a part-time employee at the Mount Carmel Animal Control facility, took photos and videos of the inside and outside of the facility for interested viewers to see. This photo shows the section of the facility that has been blocked off due to issues with the roof.

Tabitha Hicks, who is a part-time employee at the Mount Carmel Animal Control facility, took photos and videos of the inside and outside of the facility for interested viewers to see.

Tabitha Hicks, who is a part-time employee at the Mount Carmel Animal Control facility, took photos and videos of the inside and outside of the facility for interested viewers to see. This photo shows the section of the facility that has been blocked off due to issues with the roof.

Due to structural issues with the town’s animal control building, Mount Carmel has been considering outsourcing this service to Kingsport’s Petworks. However, this matter has been met with some disagreement from those employed by Mount Carmel animal control and a few aldermen.

Representatives from both Petworks and the Hawkins Co. Humane Society came before the town BMA at their Feb. 11 workshop to share details of what a contract with them would look like.

However, aldermen noted after the workshop that they didn’t plan to make an official decision until they receive an assessment on the cost of repairing the current structure from a construction company as well as a professional estimate.

The matter may be further discussed at the Feb. 25 BMA meeting.

“It needs more than a roof”

At the Jan. 28 BMA meeting, Mount Carmel City Manager Mike Housewright told the board that around half of the animal control building was closed off at the time of the meeting.

“The repairs that are necessary are way beyond roof repair,” Housewright told the board. “There are structural issues there.”

“I went up there and looked at it, and it’s awful,” Mayor Pat Stillwell replied. “It’s dangerous.”

“Once we became aware, I contacted Vicars Roofing just to have them come look at it,” Mount Carmel Police Chief Kenny Lunsford Jr. told the board. “He won’t touch it. It needs more than a roof. The structure itself will not support a roof. There are multiple roofs on that building—they have just re-roofed over shingles and metal. The roof itself is unstable. Without re-building the building, it won’t support a new roof. We’d have to tear it down and build a new one.”

When Alderman Darby Patrick asked if the town had another option, Housewright noted that, “there have been discussions about partnering with Petworks.”

Housewright also noted that Petworks had offered for any interested Aldermen to come view the facility, which is located at 3101 East Stone Drive in Kingsport.

Though he explained that no official deals have been made with the company, they had proposed that the town would pay $40,000 per year in exchange for Petworks services. This is opposed to the $57,000 that the town spent on animal control services in 2019.

The matter was then tabled for further discussion at the Feb. 11 workshop.

Both Tom Parham and Joe Herron, who are members of the Petworks board of directors, presented their proposal to the board on Feb. 11. Petworks is a 501©3 nonprofit organization.

Parham and Herron told the board that Petworks could provide the town with animal shelter service at their Kingsport facility for $35,000 per year and animal control service for an additional $5,000 per year.

However, when asked whether or not this price would increase through the years, Parham noted that it was “negotiable.”

Parham also noted that Petworks does not simply capture and hold animals, but they work to get them adopted. On average, it would take a Petworks representative around 30 minutes from the time the phone call is received to pick up a loose animal. He also noted that the facility offers 24/7 emergency services.

He also explained that Petworks is willing to discuss providing other services that Mount Carmel would like to have, such as providing a patrol officer to look for loose animals.

Parham also noted many times, “We operate with a heart.”

In regard to a question of animal euthanasia, Herron noted, “the only animals we do that to are feral animals that are not adoptable or those that are sick and hurting, and we do it out of kindness to them.”

Hawkins Co. Humane Society board President Dave Toll told the board that HCHS could provide both shelter and animal control services for the town for $36,000 each year, though he noted this price was negotiable.

HCHS is also a 501©3 nonprofit and is a no-kill facility. Toll noted that HCHS never euthanizes animals for space, and they have not euthanized a dog due to behavioral issues in 2.5 years. They are also focused on finding homes for animals, and, in 2020, they adopted out 380 dogs and 120 cats.

Though the facility is located in the outskirts of Rogersville, Toll noted that the facility already services the entire county. HCHS currently has contracts with Rogersville, Surgoinsville and Church Hill to take animals from their animal control offices.

HCHS is open from 9 a.m. to 4 p.m. Tuesday through Saturday, but they would provide 24/7 emergency services. Toll noted that the facility does not have the resources to have a vehicle patrolling the streets 24/7 to look for stray animals.

In response to an alderman question, Toll noted that HCHS does work with the Hawkins Co. Sheriff’s Department to prosecute necessary cases of animal cruelty.

Additionally, both Petworks and HCHS representatives answered board questions for over an hour at the Feb. 11 meeting.

“I’m worried about my job”

Sherry Sexton, who has been Mount Carmel’s animal control officer since 2016, told the board that she is worried about losing her job, which she told the board she “really enjoys.”

She also noted that only three animals were euthanized in 2020, and she only reserves this for animals that have terminal illnesses or behavioral issues that cannot be corrected.

She also has numerous rescue organizations that partner with the Mount Carmel animal control facility to provide medical attention to animals and help find homes for them. She told the board that she responds to emergencies 24/7.

“I’m right here,” she said. “It takes me five minutes to get dressed and get there (when called for an emergency).”

She added, “I do need some repair on my building. I (was) told by the police chief that he did have one person look at it, and the guy said he wouldn’t touch it. In my opinion I feel like we should have more than one person look at the building. The $30,000 to $40,000 that this man said it was going to take, personally I don’t believe it. Maybe that’s what he wanted to charge.”

Mount Carmel Animal Control employee Tabitha Hicks actually reached out to the Review shortly after the board first discussed the issue on Jan. 28.

Hicks, who is a part-time caretaker, expressed concern over her job as well as whether or not all of the services currently provided by Mount Carmel Animal Control would be provided if the work were outsourced.

Hicks also told the Review that she has climbed into the building’s attic to inspect the roof for damage. Though she noted that there are areas where the roof is leaking, she said, “it is not falling in like they said. The roof itself is great.”

She told the Review that she has taken videos of the inside and outside of the facility and posted them on her Facebook for interested viewers to see.

She also expressed frustration that the building currently has no hot water. She told the Review that city officials blocked off the side of the building where the wash station is located due to the issues with the roof and potential dangers.

She also claimed that she had heard nothing about the possibility of outsourcing or the fate of her job until she read about the board’s conversation in a newspaper article.

“That was the first I had heard about it,” she said. “I had to learn about it through an article…I thought I would at least get the common decency for them to say to me, ‘hey, this might be happening,’ but I didn’t get that. This has gotten me torn up, and I am super nervous.”

Housewright later told the Review that the possibility of outsourcing to Petworks brought up at the Jan. 28 BMA an alderman asked to place the matter of the animal control facility’s roof on the agenda and he hadn’t planned for the board to even discuss potential outsourcing that day.

“I do hate that it came out in that way and employees read about that,” he told the Review.

In regard to whether or not current Mount Carmel Animal Control employees would lose their jobs should the work be outsourced, Housewright explained, “it depends on what kind of relationship we have with Petworks (or HCHS).”

“I can see no advantage of moving”

“She (Sexton) does the same thing here, so I see no advantage of moving,” Alderman Jim Gilliam told the Petworks representatives at the Feb. 11 workshop.

Alderman Tresa Mawk also expressed concern over the time it would take for a Petworks representative to arrive in Mount Carmel to pick up a loose animal.

When Housewright explained that he would have the town’s building inspector complete a detailed report on the repairs needed for the town’s facility, Mawk additionally asked that a building contactor provide an estimate for repairs.

“I don’t think we’re at a place where the board is ready to make a decision on Petworks, the Humane Society, or repairs,” Housewright said. “Let me get all the information for the building repair to you guys, then, once you have enough information, you can look at all things.”

“I think you will have a lot of citizens in an uproar if you try to take it out,” Gilliam said to Housewright.

Gilliam had also noted his vehement opposition to outsourcing animal control several times throughout the meeting and explained that he didn’t want to see Sexton lose her job.

“I’m not trying to take anything out,” Housewright replied. “I’m not trying to outsource the animal control. I’m not trying to outsource the sewer. There’s been a lot of allegations cast my way, and basically it’s been from people in your camp. The simple fact is, I’m giving the board options. While you sat here and railed against the gentlemen who came here to make proposals, the fact of the matter is the majority of this board does like to see options, whether we keep it in house, or whether we take it outside.”

After some more back-and-forth, Gilliam noted, “They all want money. When they get the money, they’re gone.”

The matter will likely be further discussed at the Feb. 25 board meeting.