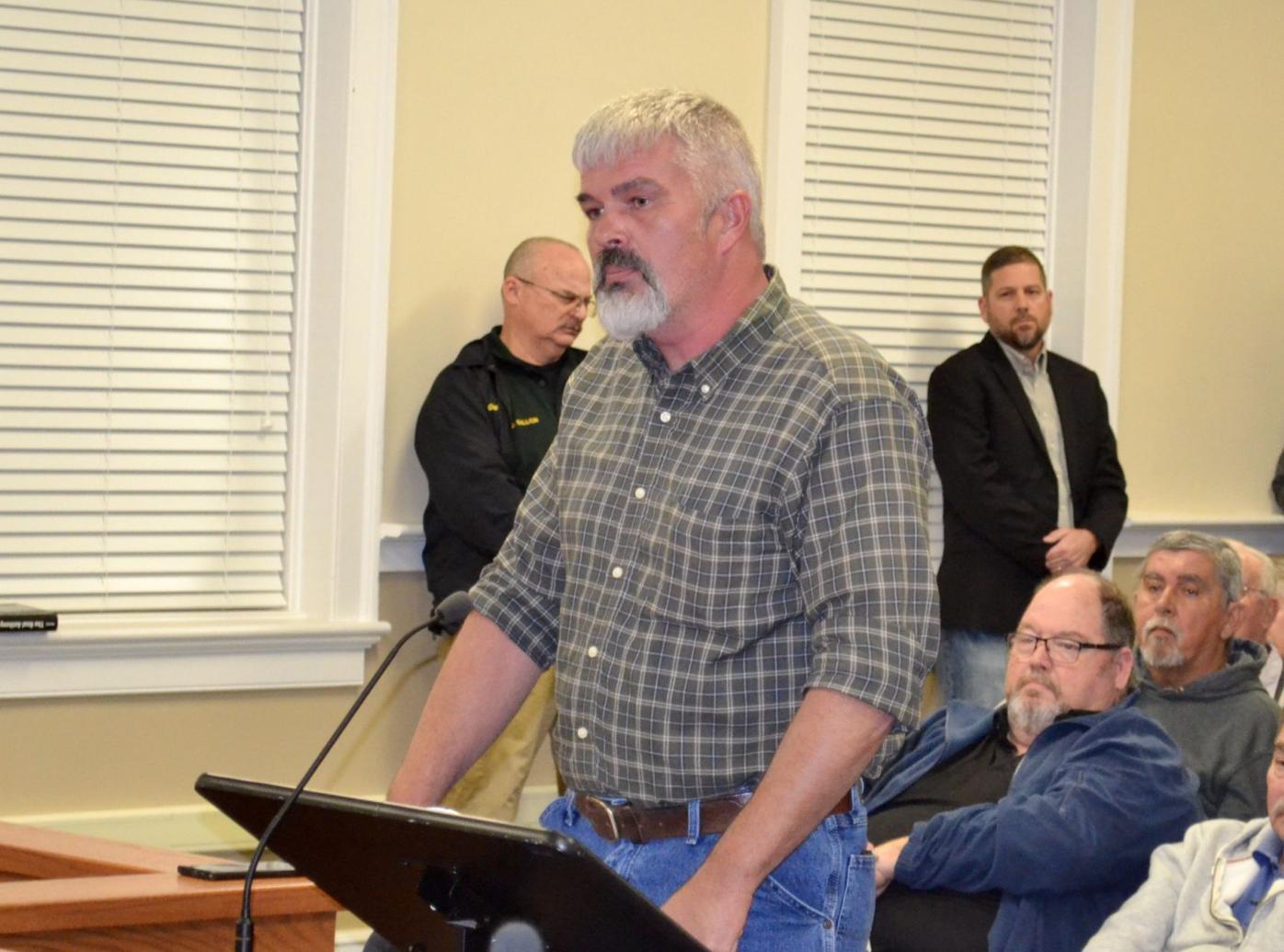 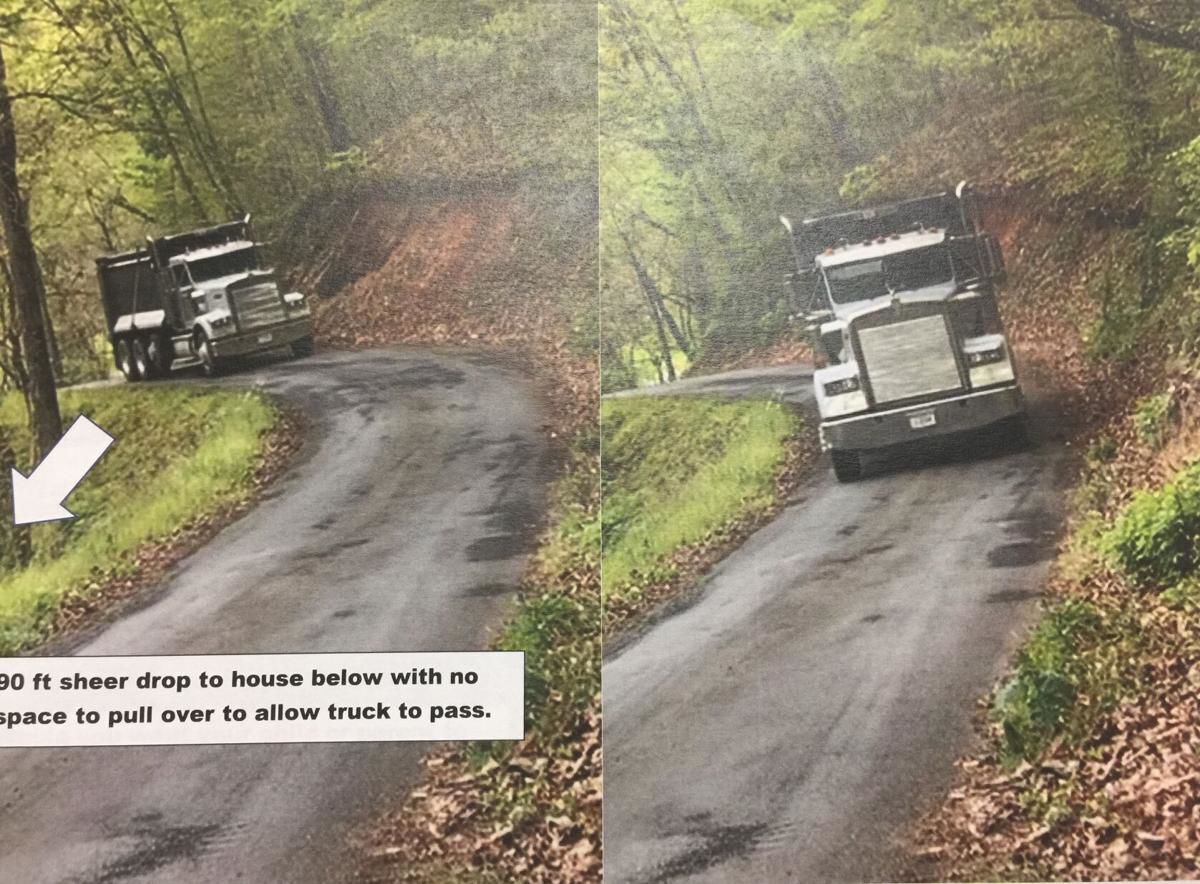 Photos submitted to the County Commission earlier this year demonstrating the danger of heavy truck traffic on some sections of Jim Town Road. 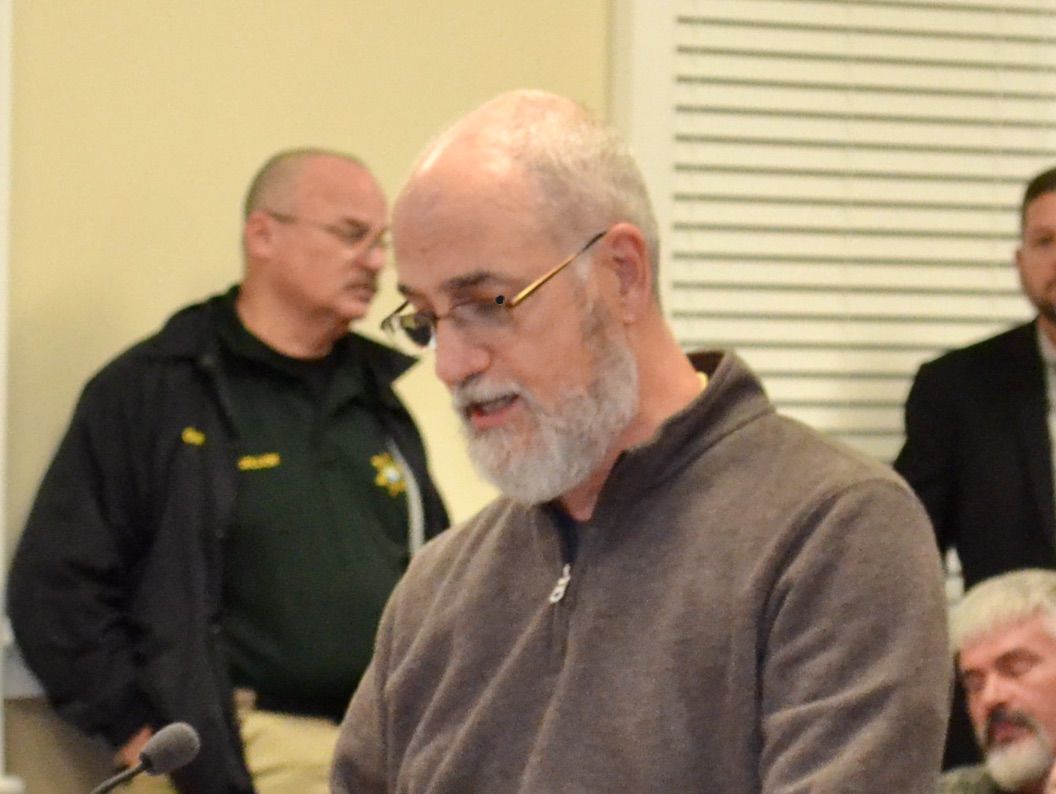 Photos submitted to the County Commission earlier this year demonstrating the danger of heavy truck traffic on some sections of Jim Town Road.

A resolution that would limit vehicle weight on Jim Town Road to 20,000 pounds was pulled from last week’s County Commission agenda as a result of an apparent lawsuit threat by the owner of a quarry that would be hindered by weight limitations.

The purpose of the weight limitations, as stated in the resolution, is to address safety concerns that could arise by allowing heavy truck traffic on that “extremely narrow road” that doesn’t meet safety standards for two-way traffic.

The resolution would prohibit vehicles in excess of 20,000 pounds on Jim Town Road except by temporary permit granted by the highway superintendent.

After that executive session concluded at least one commissioner reported to residents of Jim Town Road who are opposed to the quarry that quarry owner Dustin Long had hired an attorney. The indication was that passage of the resolution would likely result in a lawsuit.

During the Nov. 22 meeting Long told the commission he felt he was being singled out and not allowed to use his property for its intended purpose.

“The quarry has been there since the late 1800s,” Long said. “It pre-dates Cherokee Lake. It pre-dates any of these folks (who live on Jim Town Road). I bought the property in a county with no zoning in a community with no restrictions. I feel like I should be able to use my land for what I bought it for.”

Long noted that state code cited in the weight restriction resolution pertains to state roads, and not county roads.

Long added, “I can’t log my timber. I can’t do anything. Just about everything I have weighs more than 20,000 pounds. But, you’re saying everybody else can do whatever they want to do. Everybody except me. I don’t understand how that’s fair.”

Commission chairman Rick Brewer said the resolution isn’t aimed at any one person.

“We want to try to take care of the road the best that we can,” Brewer told Long. “We’ve got an engineering report on the road, and it didn’t come out the way that we’d like for it to have come out. That road will not stand heavy traffic over and over and over every day. You know that and I know that.”

“In fact, the potential severe damage to the road was demonstrated this spring,” Sanders said. “You may remember the pictures we handed out in some of the previous meetings showing the damage, and (Road Superintendent Lowell) Bean can attest to the damage that they did.”

Sanders added, “Others claim that you are enacting a defacto zoning regulation by restricting the road. To be clear, the resolution before you today doesn’t regulate what any of us do on our property. Only what we can safely put on the road. Under this resolution all of us can still move products on and off of our property. Just in smaller loads.”

Sanders noted that the commission voted unanimously in April to place similar restriction on Jim Town Road. He said to change their vote “surrenders to unreasonable fears of frivolous litigation.”

When the resolution came up on the agenda, however, Commissioner Dawson Fields stated, “As was mentioned earlier when we were in closed session with the attorney, which was not to be discussed, this resolution will be pulled at this time.”

After the meeting Fields told the Review the resolution was only pulled temporarily until legal council tells the commission to send it back through.