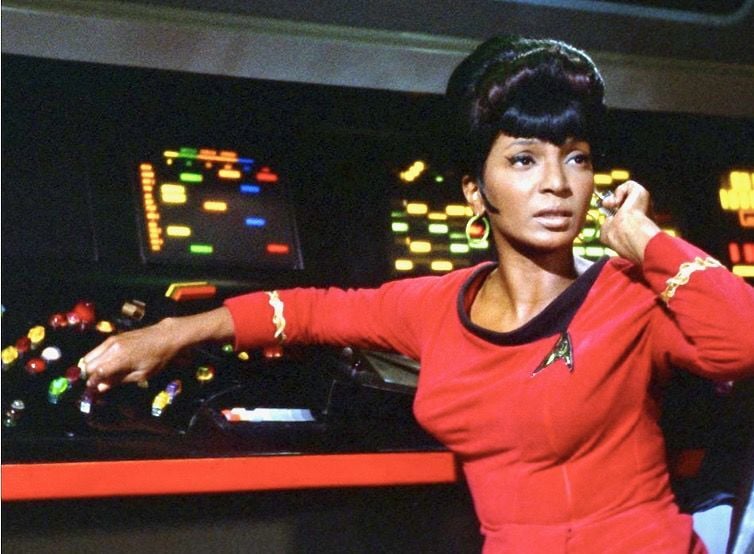 Nervous about how southern television viewers would react, NBC executives closely monitored the filming of the kiss between Nichelle Nichols and William Shatner. 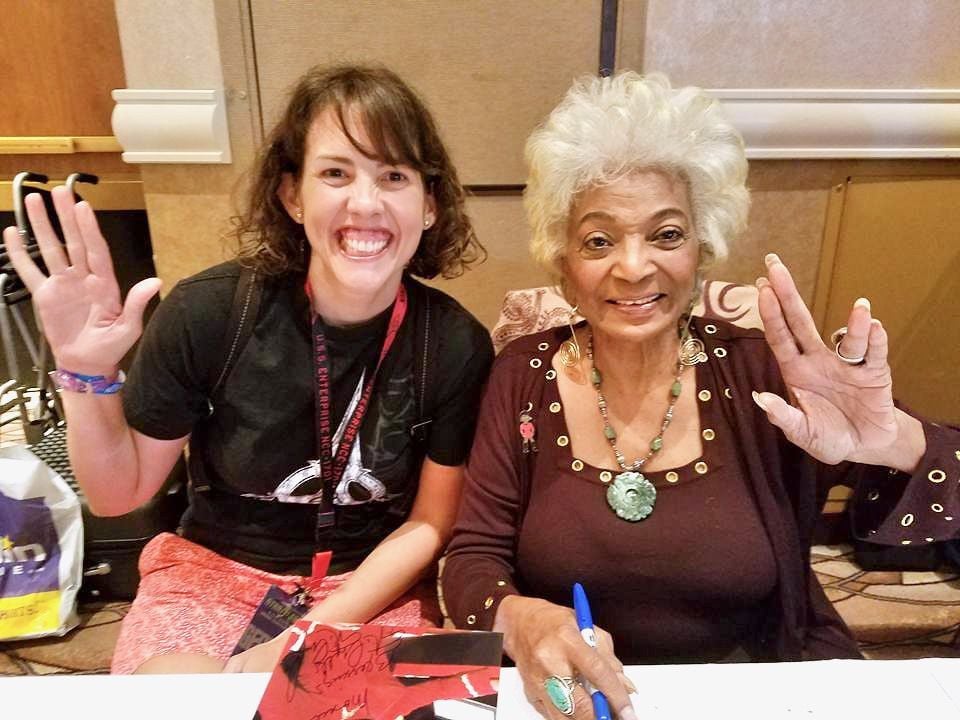 Nervous about how southern television viewers would react, NBC executives closely monitored the filming of the kiss between Nichelle Nichols and William Shatner.

The episode’s plot is bizarre: Aliens who worship the Greek philosopher Plato use telekinetic powers to force the Enterprise crew to sing, dance and kiss. At one point, the aliens compel Lieutenant Uhura (Nichelle Nichols) and Captain Kirk (William Shatner) to embrace. Each character tries to resist, but eventually Kirk tilts Uhura back and the two kiss as the aliens lasciviously look on.

The smooch is not a romantic one. But in 1968 to show a black woman kissing a white man was a daring move.

The episode aired just one year after the U.S. Supreme Court’s Loving v. Virginia decision struck down state laws against interracial marriage. At the time, Gallup polls showed that fewer than 20 percent of Americans approved of such relationships.

As a historian of civil rights and media, I’ve been fascinated by the woman at the center of this landmark television moment. Casting Nichelle Nichols as Lieutenant Uhura created possibilities for more creative and socially relevant “Star Trek” storylines.

But just as significant is Nichols’s off-screen activism. She leveraged her role on “Star Trek” to become a recruiter for NASA, where she pushed for change in the space program. Her career arc shows how diverse casting on the screen can have a profound impact in the real world, too.

‘A triumph of modern-day TV’

In 1966, “Star Trek” creator Gene Rodenberry decided to cast Nichelle Nichols to play Lieutenant Uhura, a translator and communications officer from the United States of Africa. In doing so, he made Nichols the first African-American woman to have a continuing co-starring role on television.

The African-American press was quick to heap praise on Nichols’s pioneering role.

The Norfolk Journal and Guide hoped that it would “broaden her race’s foothold on the tube.”

The magazine Ebony featured Nichols on its January 1967 cover and described Uhura as “the first Negro astronaut, a triumph of modern-day TV over modern-day NASA.”

Yet the famous kiss between Uhura and Kirk almost never happened.

After the first season of “Star Trek” concluded in 1967, Nichols considered quitting after being offered a role on Broadway. She had started her career as a singer in New York and always dreamed of returning to the Big Apple.

But at a NAACP fundraiser in Los Angeles, she ran into Martin Luther King Jr.

Nichols would later recount their interaction.

“You must not leave,” King told her. “You have opened a door that must not be allowed to close…you changed the face of television forever…For the first time, the world sees us as we should be seen, as equals, as intelligent people.”

King went on to say that he and his family were fans of the show; she was a “hero” to his children.

Nichols’ controversial kiss took place at the end of the third season. Nichols recalled that NBC executives closely monitored the filming because they were nervous about how Southern television stations and viewers would react.

After the episode aired, the network did receive an outpouring of letters from viewers – and the majority were positive.

In 1982, Nichols would tell the Baltimore Afro-American that she was amused by the amount of attention the kiss generated, especially because her own heritage was “a blend of races that includes Egyptian, Ethiopian, Moor, Spanish, Welsh, Cherokee Indian and a ‘blond blue-eyed ancestor or two.’”

But Nichols’s legacy would be defined by far more than a kiss.

After NBC canceled Star Trek in 1969, Nichols took minor acting roles on two television series, “Insight” and “The D.A.” She would also play a madame in the 1974 blaxploitation film “Truck Turner.”

She also started to dabble in activism and education. In 1975, Nichols established Women in Motion, Inc. and won several government contracts to produce educational programs related to space and science. By 1977, she had been appointed to the board of directors of the National Space Institute, a civil space advocacy organization.

That year she gave a speech at the institute’s annual meeting, “New Opportunities for the Humanization of Space, or Space: What’s in it for Me?” In it, she critiqued the lack of women and minorities in the astronaut corps, challenging NASA to “come down from your ivory tower of intellectual pursuit, because the next Einstein might have a Black face – and she’s female.”

Several of NASA’s top administrators were in the audience. They invited her to lead an astronaut recruitment program for the new space shuttle program. Soon, she packed her bags and began traveling the country, visiting high schools and colleges, speaking with professional organizations and legislators, and appearing on national television programs such as “Good Morning America.”

“The aim was to find qualified people among women and minorities, then to convince them that the opportunity was real and that it also was a duty, because this was historic,” Nichols told the Baltimore Afro-American in 1979. “I really had this sense of purpose about it myself.”

In her 1994 autobiography, “Beyond Uhura,” Nichols recalled that in the seven months before the recruitment program began, “NASA had received only 1,600 applications, including fewer than 100 from women and 35 from minority candidates.” But by the end of June 1977, “just four months after we assumed our task, 8,400 applications were in, including 1,649 from women (a 15-fold increase) and an astounding 1,000 from minorities.”

Her advocacy for inclusion and diversity wasn’t limited to the space program.

As one of the first black women in a major television role, Nichols understood the importance of opening doors for minorities and women in entertainment.

Nichols continued to push for African-Americans to have more power in film and television.

“Until we Blacks and minorities become not only the producers, writers and directors, but the buyers and distributors, we’re not going to change anything,” she told Ebony in 1985. “Until we become industry, until we control media or at least have enough say, we will always be the chauffeurs and tap dancers.”

It’s an issue that, unfortunately, remains relevant today. In February of this year, UCLA’s annual Hollywood Diversity Report found that women and people of color continue to be underrepresented as directors and in studio board rooms. It concluded that “Hollywood studios are leaving money on the table by not developing films and TV shows with more diverse casts.”

Fifty years ago, Nichols’s kiss may have broken an important cultural barrier. But as Nichols well knows, the quest to secure opportunities for women and minorities persists to this day – an effort that requires relentless pressure.

This article is republished from The Conversation under a Creative Commons license. Read the original article.

In each of those, however, a white person and Hispanic or Asian person kiss. Uhura and Kirk’s kiss is the first interracial kiss between a black person and a white person on American television. A 1962 British television broadcast of “You in Your Corner” in which a Black man and white woman kiss preceded it. The historic impact of the “Star Trek” kiss on American culture is in no way diminished by these facts.