The Walmart Community Grant Program is a highly competitive program receiving more than 150,000 applications per year.

“Walmart is committed to the communities we serve, and we want to be a part of them,” said Scott Kenkel, who is the manager of the Walmart Neighborhood Market, located in Kingsport’s Lynn Garden.

Readers may remember that the Hawkins County School board voted 5-2 in June of 2020 to approve the $1.25 million cost to install artificial turf at both VHS and CHS.

The board had discussed the idea of artificial turf for over a year before they officially voted to purchase it.

The VHS field had also experienced numerous drainage problems through the years. In fact, Hawkins County Extension Agent Jack Price and Dr. Tom Samples, Ph.D. from the University of Tennessee Turfgrass Science and Management Department, actually examined the VHS field in the spring of 2020 and concluded that it was unsafe to play on.

The school system was working on options to correct the problems when schools shut down in the spring of 2020 due to the COVID-19 pandemic.

In June, the BOE initially debated whether to repair the drainage problems and sod at VHS or purchase artificial turf for both schools.

The sod would have cost $240,000 for VHS only, and would have included redoing the crown at the grass field as well as stripping and grading the field to the proper slope and repairing the irrigation system. However, this option would have rendered the field unusable for the 2020 football season.

CHS’s current grass field is and has been in good condition, so this option would have only involved VHS.

The artificial turf cost $593,754 for Volunteer and $605,695 for Cherokee. However, Director of Schools Matt Hixson noted at the time that these are considered “ceiling prices.” The $1.25 million that was appropriated by the board also included a buffer of around $50,000.

When the BOE voted to approve the cost of turf at both schools, they specified that VHS’s field would be outfitted with turf in the 2020-2021 year, since it had experienced numerous drainage problems. CHS’s field will be outfitted at the end of the 2021 playing season.

Before the turf could officially be purchased, the school system’s budget including the allocation of money for this purpose first had to be approved by the full commission before it became official.

The school system received some strong opposition from several commissioners, and turf was a topic of a heated debate. However, the full commission eventually voted to pass the system’s budget that included the turf.

Hixson also told the commission at the time that some of the $1.25 million could be offset by community sponsorships, such as the Walmart grant that the system recently received.

The VHS turf field was completed in the late summer of 2020 and was unveiled with a ribbon cutting ceremony the following September. The VHS football team was then able to play their first season on the new surface.

“All of us at Hawkins County Schools thank Walmart for its contribution to this project and appreciate their generosity,” Hixson said of the Walmart grant. “I applaud the efforts of our board of education, Thomas Floyd, Cherokee and Volunteer high school site staff, staff from Baseline Turf, our coaches and athletic directors as well as the community for supporting these projects. The resulting work provides safe playing and multi-use field surfaces for both schools that are far easier to maintain and will last for years to come.”

Easter Sunrise Services scattered across Hawkins County joined with millions around the world Sunday morning proclaiming what they call the “best news in all of history.” According to Pastor Fred Dimond, who was invited to offer the sunrise service at Ebbing Flowing Springs United Methodist Church, “Resurrection Sunday validates the fact that Jesus Christ, worshiped by Christians, is the hope of the world.”

Dimond continued in an interview to say, “Resurrection Sunday is the most important day of the year for Christians. Between the writings of the Apostle Paul and the historian Josephus, between 400-500 people witnessed seeing Jesus after his death on a Roman cross, his burial and resurrection. That is why we gather in churches and cemeteries on this morning to give thanks and worship back to God.”

Dimond finished by stating, “Christians believe Jesus Christ is the only way to heaven, but the good news is every person is invited to put their trust in him to become a Christian. On this day, we are reminded how many people in our nation have lost hope, because their hope is in something that is temporal. Christians believe Jesus is the only promise we have that is eternal and offers us an eternity in heaven when we die. Now that’s real hope.”

Kathy Lafallette, pastor of Ebbing and Flowing Springs, remarked that this little church was the continual site for worship going back to the 1700s. Members stated they were pretty sure that the tradition of holding sunrise services went back to the founding of the church in the very early 1800s, making it one of the longest standing places for a sunrise service in Hawkins County.

Jack Jacobs, who owns the Thomas Amis farm and is a neighbor who attended the service, stated, “Francis Asbury, a part-founder of the Methodist movement in America, preached on these very grounds.” He also relayed that, “Thomas Amis’ grandson donated this property where church was held. There is another smaller building on the property which we think of as an old school house, but actually it was a church built possibly in the early 1800s.” No records were kept to indicate if the group of believers began in a log structure or this frame church before the present building was built in 1899.

While it’s not known how many churches have Easter sunrise services, most of the 100 churches in Hawkins County practice the season of Lent each year preparing their hearts towards Easter week, which coincides with the Jewish observance of Passover. Then during the week, many Hawkins County Church have special Easter-related services on Thursday or Friday nights, the respective nights of Jesus observing Passover with his disciples and Friday, when he was crucified and buried.

The afterschool program provided by the YMCA is expanding this year thanks to a grant.

Elizabeth Chappell told the Hawkins County School Board on Thursday night that the Y has received a grant allowing it to open new sites at St. Clair, Bulls Gap, Mooresburg, Joseph Rogers and Carter Valley. Two established sites at Church Hill Elementary and Mt. Carmel are funded by the same type of grant.

“Our goal for the program is to reach 230 students in Hawkins County, between the eight sites,” Chappell said. She is the director of youth development for the Greater Kingsport Family YMCA.

“While our main focus in the afterschool program is to increase the students’ literacy and math skills, we also working on building social and emotional skills,” Chappell said.

The Y’s programs operate from 3 p.m. to 6 p.m. and will continue throughout the summer Students are given a healthy snack and offered homework help, tutoring, enrichment programs and activities, and physical activities.

Staff members monitor student’s grades and report their progress to the University of Tennessee College of Social Work, which forwards the data to the state for funding and accountability purposes.

A STEM (Science, Technology, Engineering and Math) coordinator visits the afterschool sites on a rotating basis to provide STEM activities, too. And once a month staff offers engagement activities for the students’ parents or guardians.

The grant requires that the program recruit volunteers within the county who help expose students to experiences they would not otherwise have access to, sometimes conduct workshops for parents. Partners can be individuals or businesses, and can work with one school or all schools.

The Hawkins County School System already partners with the Y, but more partners are always welcome.

The program also has staff positions available at Church Hill Elementary, Mt. Carmel, St. Clair and Carters Valley. Applicants can apply for the positions on Indeed.com. 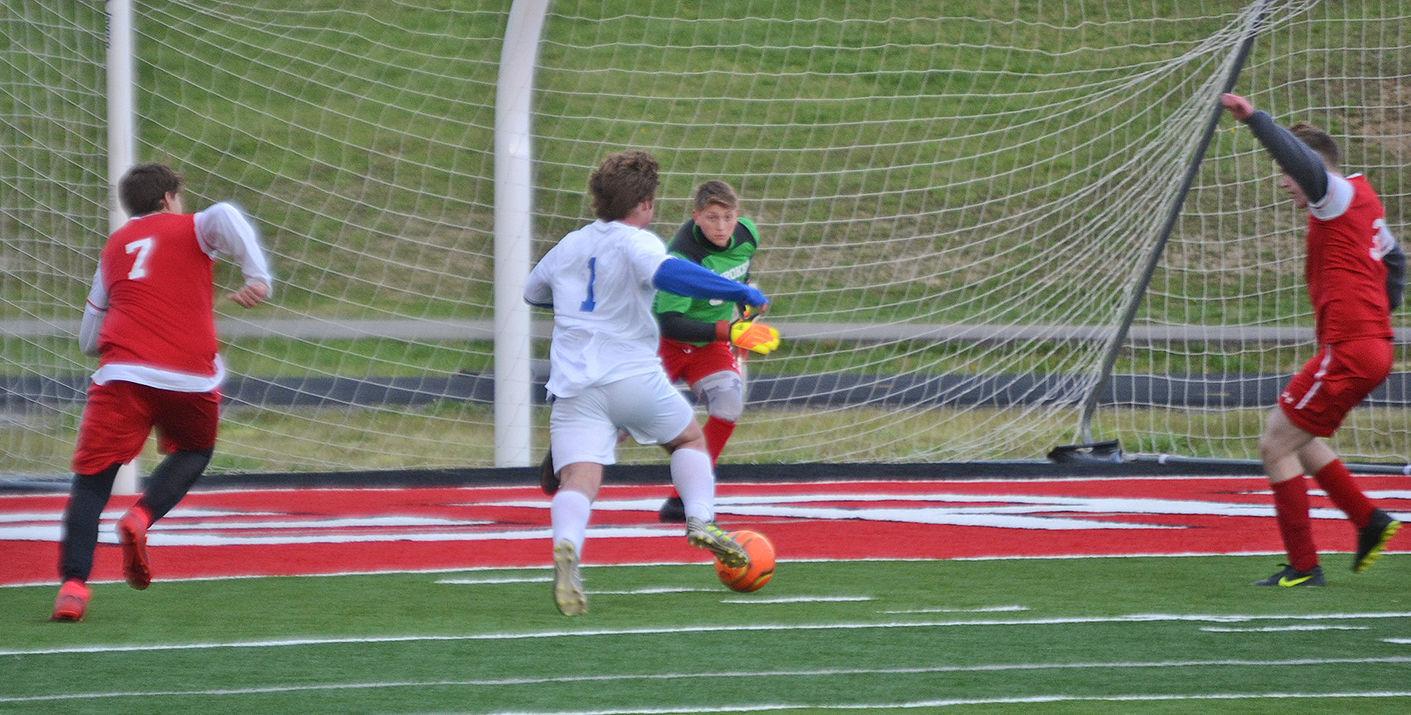 Volunteer’s Dawson Dykes drives the ball toward the goal Thursday against Cherokee. Dykes scored three goals in the game, following up a five-goal night two days earlier against Kachea.

A man on a motorbike who attempted to drive through a working crash scene on Sunday was wrestled to the ground and arrested by highway patrol officers.

Brian Kelly, 43, of Kingsport was spotted by Hawkins County Deputy Billy Begley passing a truck on a double yellow line while southbound on Goshen Valley Road. As he pursued the motorcyclist Begley reportedly clocked him at 60 m.p.h. in a 45-m.p.h. zone.

Begley ended the pursuit due to the high rates of speed and the fact that the Tennessee Highway Patrol was working an accident on Beech Creek Road, where both Kelly and Begley were traveling.

Begley soon received a report that Kelly had been stopped at the previous accident scene. THP Trooper Chris Vaughan said he had been able to tackle the driver and drag him off his bike.

Begley said the driver smelled of alcohol, had slurred speech and was unsteady on his feet. He also reportedly failed a field sobriety test.

Vaughan said he recovered two glass pipes, commonly used for narcotics, and a quantity of what appeared to be methamphetamine when Kelly was searched.

Officials said the bike was not registered and not insured.

A motorist who was stopped for the original accident said Kelly almost hit her as she was standing outside her car and trying to warn him to slow down.

NASHVILLE — Tennessee’s State Veterinarian wants to make citizens aware that an outbreak of rabbit hemorrhagic disease virus type 2 (RHDV2) has been detected near the Tennessee border in Arkansas. There have been no cases found in Tennessee, but rabbit owners should be mindful of the heightened risk.

Rabbit hemorrhagic disease does not affect humans or other animals. However, it is highly contagious and fatal to domestic rabbits, wild hares, and pika. RHDV2 can be transmitted through direct contact with infected rabbits or carcasses, meat or fur, feces, bodily fluids, bedding material, feed and water bowls, and hay.

“Onset of this rabbit virus is extremely quick and it’s persistent,” State Veterinarian Dr. Samantha Beaty said. “The virus can remain in the environment for an extended time, even in extreme temperatures. Pet owners and breeders should be alert for any signs their rabbits are infected.”

Infected animals may experience lethargy, decreased appetite, labored breathing, swelling, and internal bleeding. Owners should also watch for bloodstained noses or mouths although often the only sign is sudden death of the animal.

The best defense against RHDV2 infection is increased biosecurity measures. Rabbit owners are urged to follow these procedures:

•Separate domestic rabbits from other pets, livestock, and wild animals.

•Thoroughly wash hands, clothes, and shoes before and after contact with domestic rabbits.

•Dedicate a pair of shoes to be worn in rabbit housing and don’t wear them outside the housing area.

•Quarantine newly-acquired domestic animals for at least 30 days from other pets and livestock.

•Do not handle dead wild rabbits.

Hunters should wear gloves and disinfect tools, equipment, and hands after field dressing wild rabbits. Meat from healthy animals is safe for human consumption if dressed and cooked properly.

RHDV2 is a reportable foreign animal disease in the United States. Rabbit owners who experience a high number of sudden deaths should contact the state veterinarian’s office immediately. All rabbits entering Tennessee are required to have a certificate of veterinary inspection. Contact the state veterinarian’s office at 615-837-5120 or email animal.health@tn.gov for import requirements.

For the most current map of RHDV2 outbreaks, visit the USDA’s Animal and Plant Health Inspection Service website at www.aphis.usda.gov/aphis/maps/animal-health/rhd.