The state fire marshal is still investigating a fire near Surgoinsville.

An unknown caller notified law enforcement of a blazing fire Thursday night and the quick response by fire departments contained the damage.

The Hawkins County Sheriff’s Department received the call at almost 11 p.m., and when Dep. D. Winter arrived he found three car haulers on fire, along with the vehicles they were hauling, and multiple fire departments already on the scene.

The scene, at 5106 Highway 11W, involved three large tow trucks with loaded vehicles, all of which were fully engulfed in flames when firefighters arrived.

Firefighters reported that leaking flammable liquids and exploding tires made the fire difficult to contain.

The victim is reported to be Randle Brian Garrett of Church Hill. Garrett, owner of Garrett’s Transport, refused comment on Monday morning.

The state fire marshal is investigating the fire. On Friday the scene was surrounded by crime tape, but it was removed by Sunday afternoon.

Hawkins County children found a way to beat the heat this weekend, as the town hosted the A.S. Derrick Park splash pad grand opening on April 30.

Once Mayor Dennis Deal officially cut the ribbon in front of the new water feature, several kids began to try it out.

“When I woke up this morning, I got to thinking about the city of Church Hill,” Deal told crowd gathered to watch the ceremony. “Our forefathers named this city pertaining to a church on the hill. The city has really been blessed. The good Lord has blessed us beyond means…Our past boards and our current board has allowed us to be where we are today financially.”

After construction delays due caused by COVID-19 shutdowns, the splash pad was completed in July of last year, and an official grand opening was set for August. As COVID-19 cases continued to rise, the town eventually cancelled the grand opening.

The afternoon of April 30 this year was the first time the water feature has been open to the public.

“We never dreamed this time last year that we would be shut down,” Deal told the crowd. “We had no recreation, and we had to shut our fitness center down and our senior citizens center.”

The structure, which was designed and installed by Vortex Aquatic Structures International, is 1,963 square feet and includes in ground and above ground features that users can enjoy. The structure is also ADA (Americans with Disabilities) compliant.

The splash pad will be open from 8 a.m. to 8 p.m. daily in the summer months for public use.

The splash pad is one of several new upgrades coming to A.S. Derrick Park. A stage, playground sets for ages 2-5 and 5-12, and a wheelchair accessible swing set have also been installed. Two new picnic shelters will also be installed soon.

In September, the town also purchased the nearly three-acre piece of property behind Church Hill’s VFW Post 9754. This property is located at 261 Silver Lake Road and will be used to expand Derrick Park, which is located just next door to Post 9754, and create two ball fields and two parking lots.

Deal also reminded the crowd that some of the town’s recreational sports for children begin on May 6. The town is also planning a May 15 parade for Volunteer High School seniors at 6 p.m. At the conclusion of the parade, students and their families will gather in the parking lot of the Church Hill Library for speeches and socialization.

Church Hill’s city pool, which is located at 424 Lane Street, also remained closed for the entire summer of 2020 due to COVID-19 cases. Deal told the board at the time that 2020 was the first year in his memory that the city pool wasn’t open.

As was traditional before the COVID-10 pandemic, the city pool is set to open on Memorial Day weekend in 2021.

“We’ve been very blessed in this city with what we’ve been able to accomplish,” Deal told the crowd. “We’re a community city…and if we can make it better, that’s what it’s all about.” 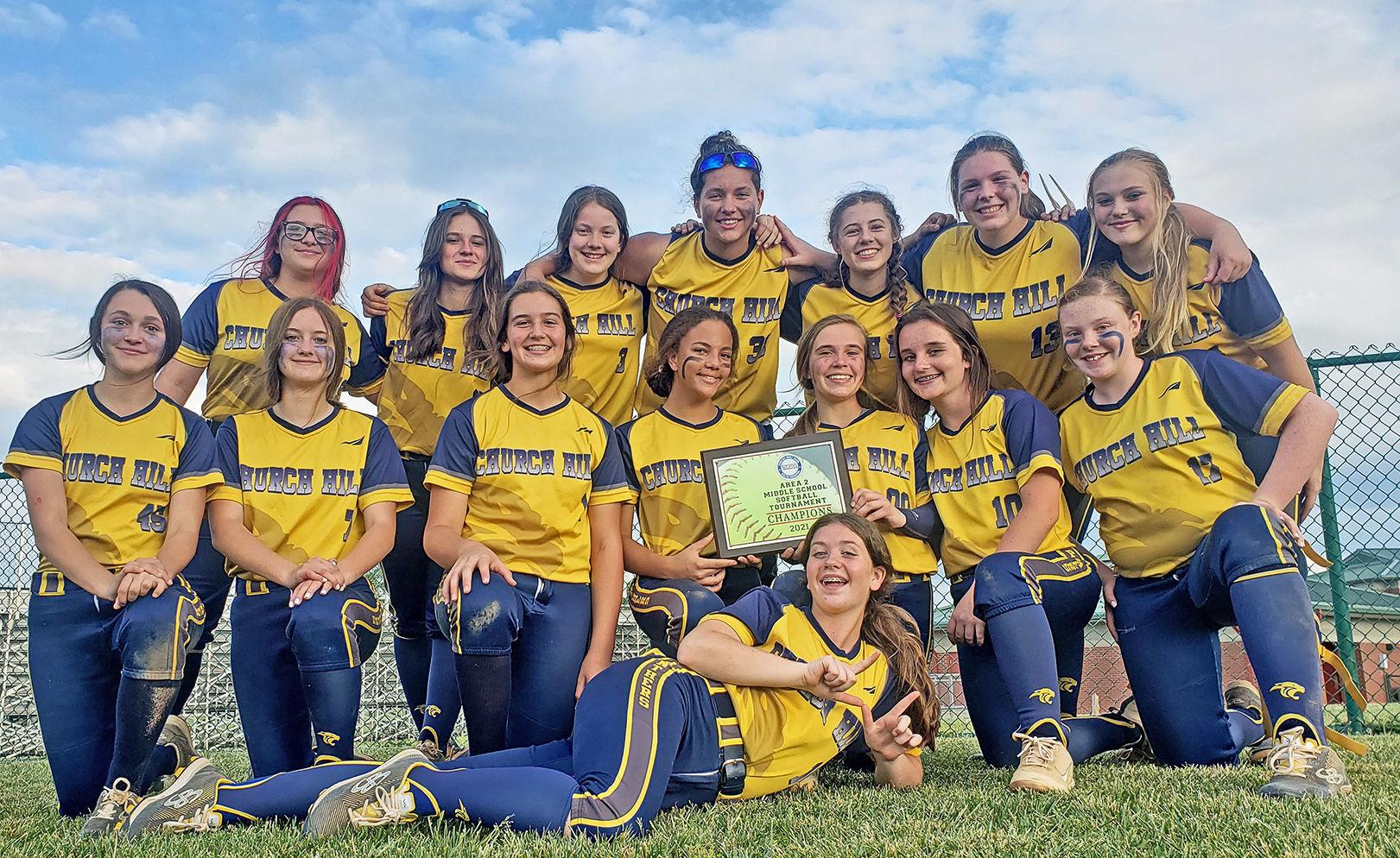 Courtesy photo; others by Jim Beller

Students and April Stoval working with Dash and Dot robots

Librarian April Stovall was recently awarded a $5,000 grant made possible by the TVA-BMI STEM Classroom Grant. Stovall’s project was selected from among 600 applicants and has already put it to use in her classes. Director of Schools Matt Hixson explained that Librarians are not what we used to picture them to be. Stovall is an excellent example of how to engage our students.

Stovall wanted to highlight women in STEM (science, technology, engineering and math), and in particular encourage girls to this area. Her students are shown building windmills and studying energy, programing robots and building structures after studying Architect Zaha Hadid.

The Tennessee State Fire Marshal’s Office joined the Tennessee Department of Agriculture’s Division of Forestry to raise awareness among home and property owners regarding the importance of Wildfire Community Preparedness Day last Saturday.

The threat of wildfires is becoming increasingly prevalent and dangerous, posing greater risks to people and property as a growing number of people are living where wildfires are a real risk. Every year during the spring and fall seasons, wildfires occur across Tennessee. In Tennessee in 2019, there were 529 wildfires that burned over 5,300 acres.

On Wildfire Community Preparedness Day, fire departments, homeowners and communities can take action together to protect personal property from the risk of wildfires. Created by the National Fire Protection Association (NFPA), the Wildfire Community Preparedness Day campaign encourages people and organizations everywhere to come together on a single day to take action to raise awareness and reduce the risks of wildfire.

“From Tennessee’s rural farming communities to our more urban areas, the threat of wildfires pose a risk to thousands of Tennesseans,” said Tennessee Department of Commerce & Insurance Assistant Commissioner for Fire Prevention Gary Farley. “I encourage all home and property owners to take time today to evaluate their risks of wildfires and take steps to help prevent a fire that could lead to tragic consequences.”

The Tennessee Department of Agriculture’s Division of Forestry is a proponent of wildfire hazard reduction programs. The Division has partnered with NFPA and its federal partners to promote the Firewise Communities program since 2002. The Division actively promotes Fire Adapted Communities — in which a multitude of programs and concepts work hand in hand to increase community wildfire safety.

Research shows there are proven methods for preparing properties for withstanding the devastating impacts of a wildfire. During Wildfire Community Preparedness Day, consumers can take steps to protect their homes and families by eliminating vulnerabilities, particularly in the immediate 5-foot zone around a residence. Whether it’s replacing wood chips with gravel or reimagining a home’s entire landscape design, the steps taken on Saturday can have a long-lasting impact. Additionally, consumers should remember the following wildfire preparation tips:

• Know two ways out. Plan two ways out of your neighborhood and designate a meeting place before a wildfire threatens your area.

• Protect your home from embers. Clear needles, leaves and other debris from roofs, gutters, porches and decks.

• Move firewood piles. Firewood piles can ignite from wildfire embers and then ignite your home. Keep piles of firewood at least 30 feet away from buildings.

To help improve consumer fire safety at home, the State Fire Marshal’s Office began the “Get Alarmed, Tennessee!” program in 2012. Since its inception, over 244,000 free smoke alarms have been distributed to Tennessee fire departments and partner organizations across Tennessee. So far, at least 314 residents have been alerted to fires in their homes and escaped without serious injury thanks to smoke alarms installed through the program. Consumers should contact their local fire department and ask if the department participates in the “Get Alarmed” program.

Click and hold your mouse button on the page to select the area you wish to save or print. You can click and drag the clipping box to move it or click and drag in the bottom right corner to resize it. When you're happy with your selection, click the checkmark icon next to the clipping area to continue.