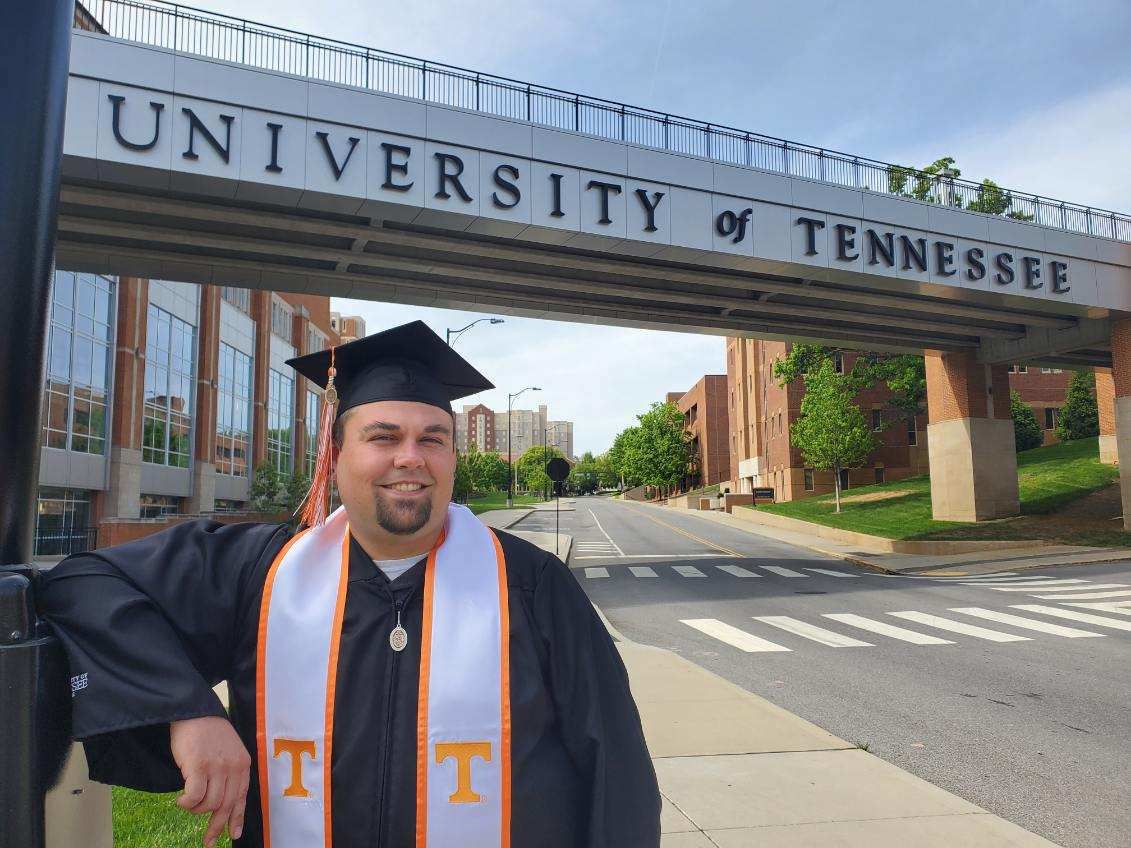 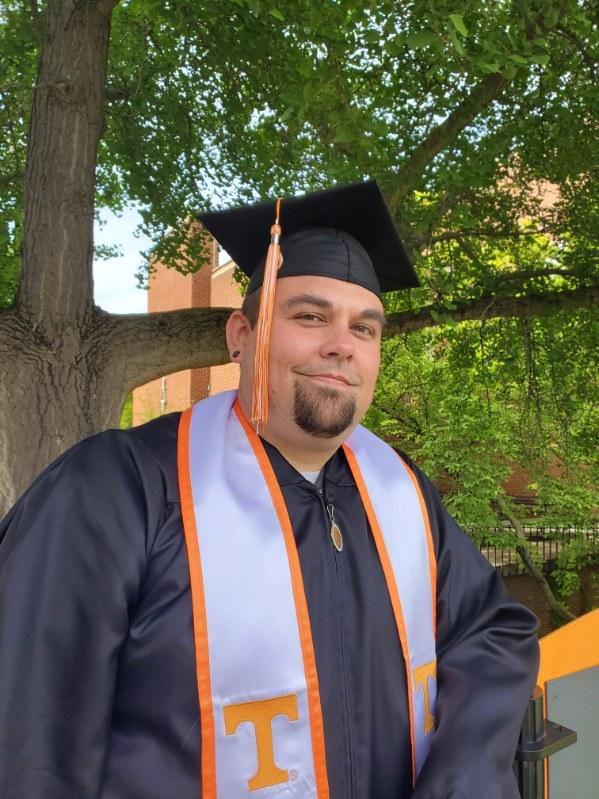 Jessie Ringley is many things. He’s a husband, a father, a son, a mechanic and, now, the proud holder of a bachelor’s degree in mechanical engineering.

At the age of 28, Jessie decided to go back to school for his bachelor’s degree.

“He worked full time and went to school full time,” his wife, Susan, said. “Plus, we have a family.”

After six years of hard work, Jessie had completed the course requirements and was set to graduate on May 9. Unfortunately, Jessie, along with hundreds of other seniors at the University of Tennessee, may not be able to celebrate with a traditional graduation due to the COVID-19 interruption.

Susan, with whom Jessie has been in a relationship since the pair were 12 years old, wants to ensure that Jessie’s accomplishments are still celebrated.

“Originally, after high school, Jessie got a welding certificate through TCAT, but he didn’t really know what he wanted to do,” Susan said.

After graduating from TCAT (Tennessee College of Applied Technology), Jessie worked at MAHLE Engine Components in Morristown for around 15 years.

“He started out on the line at MAHLE and worked his way all the way up to doing the job of a mechanical engineer without the degree,” she said. “But, he wasn’t paid the full level as someone with the degree would be. He could take anything apart and put anything together in that factory. When it came down to creating new systems, processes or machinery, he was the go-to guy.” He’s very technically-minded and good at developing new ideas as well.”

For the last two of the six years he worked on his bachelor’s degree, Jessie was a full-time student who also worked as an on-campus research assistant.

“If he was not working, eating or sleeping, he was studying,” Susan told the Review. “He could sit for six to eight hours at a time and do math so advanced that there’s not even numbers involved anymore—it’s just letters and shapes. He enjoys doing it, but there were a lot of nights with very little sleep and many days with less family time because he had to get his studies done.”

Susan explained that their nine-year-old son, Charlie is also quite proud of his father.

“My husband’s personal mission is to teach Charlie advanced math all the time,” Susan said with a laugh. “Jessie can ask him, ‘what’s the formula for the speed of light’ and he can give you the correct answer. He gets into it.”

The road to receiving his bachelor’s degree was not an easy one, though—or a short one, for that matter.

The Ringley family lives in Rogersville, just blocks away from the Rogersville Review office, but Jessie drives to UT’s campus five days a week.

The one-way trip from Rogersville to UT’s campus takes roughly one hour and a half and is about 70 miles.

As if this was not enough, the Ringleys also run a small business called Engineered Motorsport Solutions where Jessie builds high-performance car engines.

He is also a paid research assistant at UT who focuses on using bio-inspired materials to mimic the efficiency and function of the human brain.

“Jessie has always been in love with anything that went fast,” Susan told the Review. “Even when we were 16, it was his very first car that he learned how to tinker on. Then, right before he went to college, he raced motorcycles semi-professionally. Now, he owns the second fastest four-cylinder eco-boost Mustang in the nation. It’s all because of the parts and the engines that he builds. That’s where our small business comes out of.”

Susan explained that Jessie loves the complexity of engines and motors.

“I can look at him and, if he is staring something, I’ll say ‘you’re taking that apart in your head, aren’t you?’” Susan said. “He’ll just laugh and say, ‘shut up’ because he knew I was right.”

Jessie was supposed to graduate on May 9, but graduation has been postponed due to COVID-19.

“We received word that UT is looking at a tentative plan to maybe have the ceremony sometime this fall, but nothing is confirmed,” Susan told the Review. “At this time, it is cancelled.”

They had originally planned to celebrate after graduation with a family ‘get-together’ that included Jessie’s parents, Jeff and Audrie Ringley.

“His mom and dad have been very supportive of him throughout this journey,” Susan said.

Though Susan explained that Jessie was disappointed by the change of graduation plans, he is keeping his eye towards the future.

“His end goal is to receive his doctorate,” Susan said. “He isn’t one to dwell on his disappointment, so I guess he is looking more forward to walking across the stage in four or five years with his doctorate degree.”

But, Jessie isn’t going to be relaxing for long after receiving his bachelor’s, as he begins his PhD program in June.

“He had to apply and get letters of recommendation to be accepted into the program,” Susan said. “We got official word of his acceptance about a month ago. But, since he starts in June, he won’t even be taking the summer off—he’s going right into the program. Jessie’s ultimate goal is to become a full-time professor and teach engineering.”

In regard to the couple’s place of residence, Susan told the Review that moving to Knoxville could be a possibility.

“It wouldn’t surprise us if we ended up there (Knoxville) eventually,” she said. “In my line of work, which is in Morristown, we may be moving towards Knoxville. But, our son is nine right now, and we like staying close to the family while he is younger.”

Young love in the halls of RCS

The Ringleys’ relationship actually began in the halls of Rogersville City School when both Jessie and Susan were only in the seventh grade.

“I actually asked him out, and he told me ‘no’ the first time,” Susan said with a laugh. “He said he already had a girlfriend. There was a school dance on October 24, and I asked him to dance with me. He again told me ‘no, I already have a girlfriend,’ so I said, ‘we’ll dance as friends then.’ He went home that night and broke up with his girlfriend. We consider the date of that dance to be our dating anniversary.”

She explained that, though they liked each other at the time, they didn’t expect their relationship to end in marriage.

“At 12 years old, people always tell you, ‘you don’t know what love is’ or ‘you will come across so many other people,’” Susan said. “But, I found a good one, and I kept him.”

The pair continued their relationship through their years at RCS and Cherokee High School. Both Jessie and Susan graduated from CHS in 2003 and got married shortly after in 2005.

Their wedding actually took place in the courtyard of RCS.

“That was his idea, actually,” Susan said. “I was proud of him on that one.”

“We started dating when we were 12 years old,” Susan told the Review. “We’ve been together 22 years now, so in that 22 years, we’ve almost ‘raised’ each other to a degree. A young guy who graduated high school at 17, I just don’t think he knew what he wanted to do. I don’t think he realized how smart or how capable he was. I’ve always seen it and knew he could, but I think it took him a while to see it himself. The man that I married when I was 20—I would have never, ever thought he would end up pursuing a doctorate and wanting to be a professor. He’s an amazing man and always has been. We’ve just kind-of grown up together and watched each other change. I’m just so proud of him.”