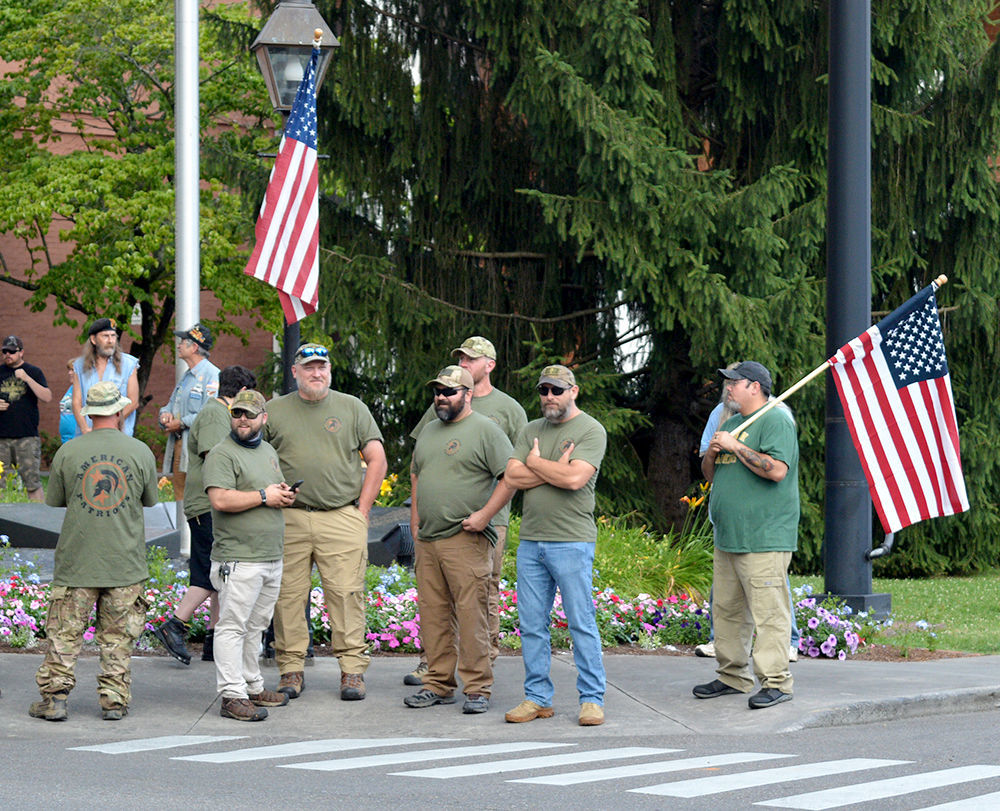 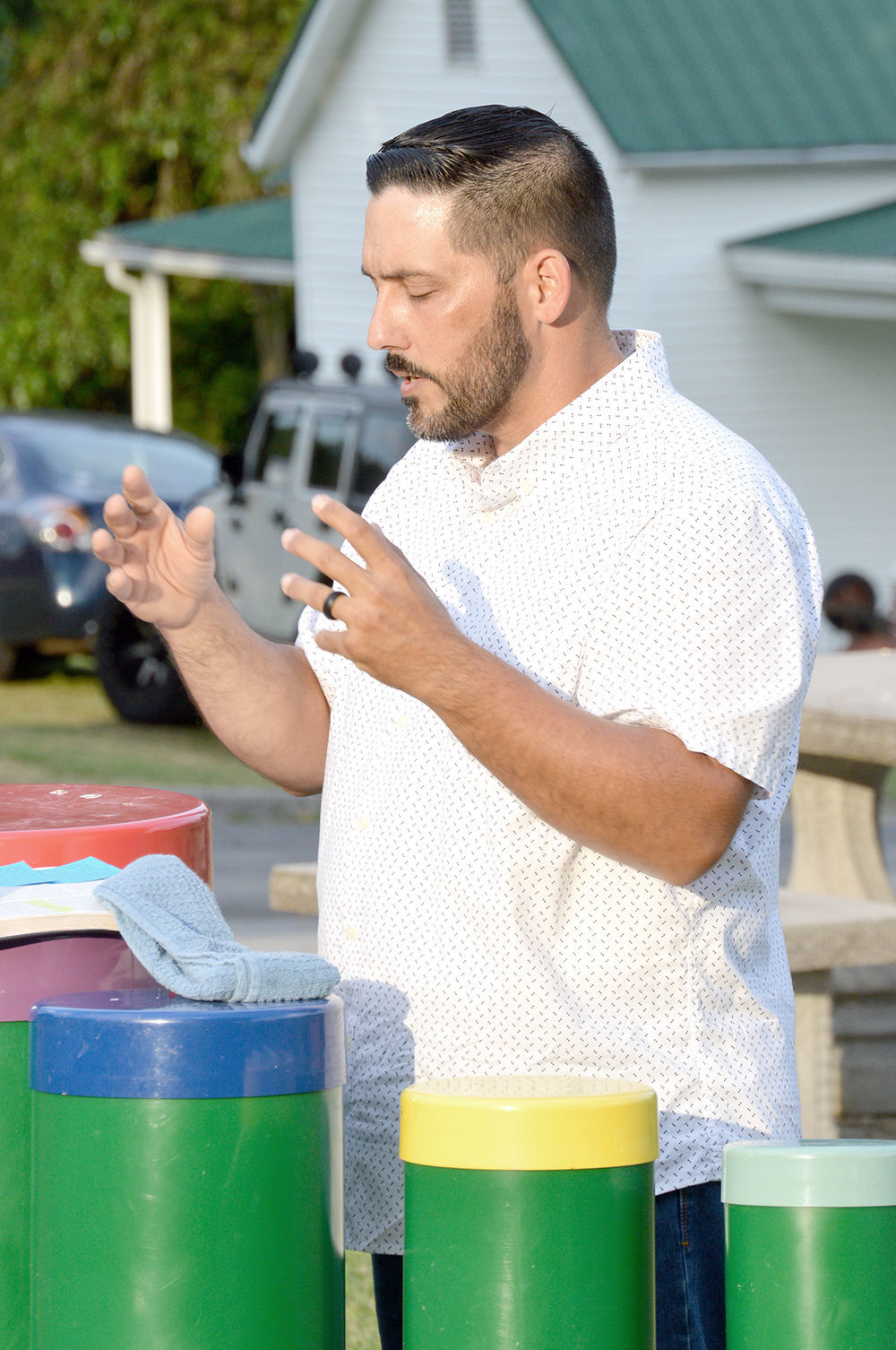 Hasson Street Christian Church Jason Ward along with two other people met at Swift Park on Friday evening to pray for the nation. 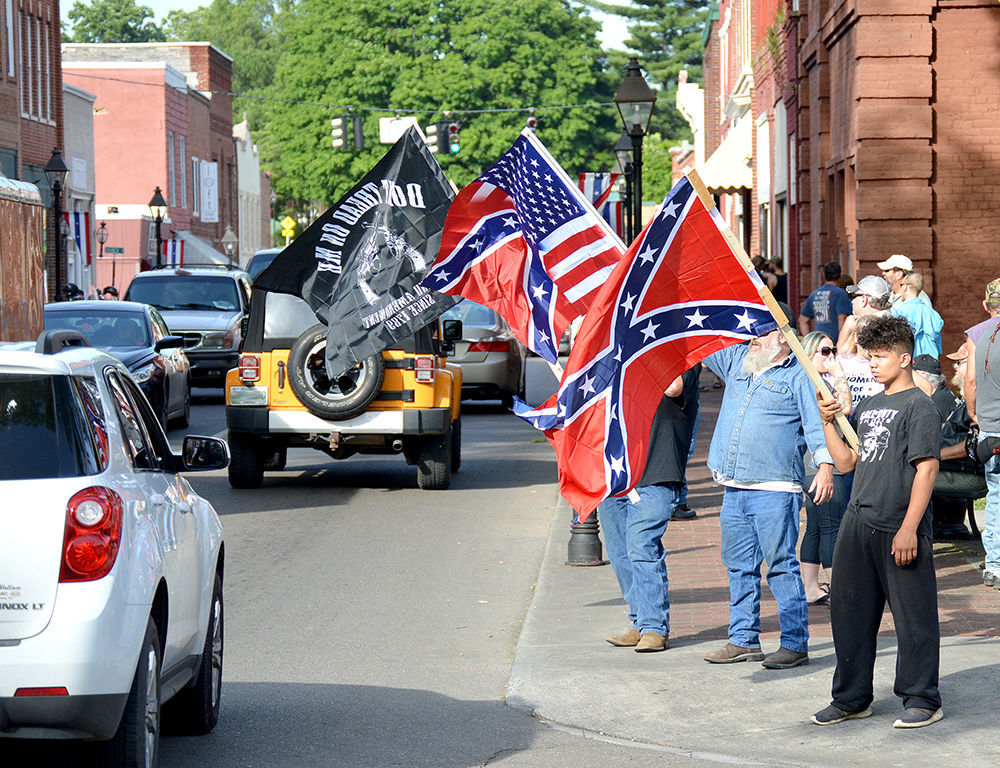 Hasson Street Christian Church Jason Ward along with two other people met at Swift Park on Friday evening to pray for the nation.

ROGERSVILLE — A crowd estimated at more than 300 gathered around the Hawkins Co. Veterans Memorial on the Courthouse lawn and on side streets Friday evening in what some participants told the Review was a “show of support for veterans, heritage and police”.

People began pouring into the downtown area in mid-afternoon after social media posts regarding a gathering that evening at Swift Park went viral and quickly became misconstrued, according to the three people who showed up at that location to participate in a livestreamed prayer for peace in America.

Rogersville Police said that someone did contact City Hall earlier in the week to ask if a permit was needed for the event at Swift Park, but said that, to their knowledge, the event never involved Black Lives Matter or Antifa.

“Prayer and Dialogue” Bobbi Smith, who is the Secretary of Care NET CCC told the Review that members of Care Net CCC had planned to meet at Swift Park for “prayer and dialogue” with members of Hasson Street Christian Church.

Care NET CCC, which stands for Care Northeast Tennessee Community Conservation Committee, is an organization focused on “protecting, preserving and enjoying nature and the environment in East Tennessee.” They are a branch of the Sierra Club, and their Facebook page can be viewed at https://www.facebook.com/northeasttennesseeteam.

Smith confirmed for the Review that Care NET is not affiliated with BLM as an organization.

Given the similarity in their name, Care NET CCC is often mistaken for Care Net, which is a network of pregnancy centers that focuses on anti-abortion teachings, but the two groups are not affiliated.

“After George Floyd’s killing, we (Care NET) decided to get together with members of Price Public Community Center, Hasson Street Christian Church and others to have a little dialogue,” Smith said. “We decided to meet with them at Swift Park on Friday evening and talk it over. We wanted to talk about, ‘What could we do?’ ‘Could we have a peace walk?’ ‘Could we have a something?’ We don’t even know what the ‘something’ might have been.”

She went on to add that, whatever they had ended up planning, it was going to be peaceful and focused on ‘love’.

“We weren’t expecting to carry signs or anything,” she said. “We had ordered 100 buttons with hearts on them, and we had a little flyer that was about love. We were even planning songs that we could sing with our ukuleles.”

She went on to add that, “out of an abundance of care,” a Care NET member spoke with the Rogersville Police Department about obtaining a permit but were told that they didn’t need one.

“Unless you are blocking the streets or affecting the flow of traffic, you actually don’t have to have a permit if you just want to assemble downtown or at a park,” said RPD Assistant Chief Travis Fields.

Fields also told the Review that organizers from the ‘counter-protest’ also asked RPD about obtaining a permit and were also told that they didn’t need one.

“And that’s all it was about—Prayer”

Ward told the Review following the 18-minute prayer event that several local churches had simply wanted to get together to talk and offer prayers for America during these troubling times.

A post on the church’s Facebook page at 4:13 p.m. on June 26 stated: “We will be going live at 7:20 from Swift Park with a quick word and prayer. Join us to pray for our community, state, nation and world.”

“And that’s all it was about. Prayer. There were no hidden agendas,” Ward said.

When it became apparent that a counter-event was going to happen just a couple of blocks away, in downtown, RPD called a Care NET representative to discuss the event and recommended that they consider postponing.

A recording of the livestreamed prayer event can be viewed on the website, www.facebook.com/hassonstreetchristianchurch.

“We heard BLM and Antifa would be here”

Several members of the crowd that gathered at the Courthouse told the Review that they had heard from multiple social media posts that “a crowd of outsiders” were enroute to Hawkins County with the intent to deface the county’s Veterans Memorial.

That war memorial honors Hawkins County soldiers who died in foreign wars dating back to World War One. For the record, the Memorial does not include the names of local soldiers who died fighting for the North or the South during the Civil War.

“We are here because we heard that Black Lives Matter and Antifa were planning to be here,” said one veteran. “I served in Vietnam and I am a peaceful man, but I can tell anyone this straight up: you come here and mess with this memorial, I promise, I’m gonna mess with you! I don’t hunt trouble but if trouble comes, me and the rest of these guys will be here to meet it head-on.”

Large flags ranging from the American Stars and Stripes, to various Confederate flags, to “Don’t Tread on Me” banners and others, were on display on the street corner, getting waves and horn honks from a continuous stream of traffic through downtown.

“There is not a racist bone in my body” One man who had been holding a Confederate flag at one point, told the Review that Civil War history, as it is taught today, omits the fact that several thousand freed black men voluntarily signed up and fought for the South under that same flag.

“There is not a racist bone in my body,” he said. “I don’t hate anybody, of any color. My interest in the War is 100% historical. My concern is, agitators are wanting to tear down and destroy everything ‘Confederate’ when the historical facts, if they are taught honestly, will show were just as much heritage for black southerners as white southerners. Hell, my son-in-law is black and he and my grandchildren agree with what I am doing here!”

“Look it up. I’ll bet you never heard that mentioned before, not in school, not by the mainstream news media, not anywhere. I’m not saying that everything that happened back then was right. God knows, slavery was wrong, but you can’t erase history, you can’t change what happened, by tearing down monuments. A man once said that people who forget their history are doomed to repeat it, so that’s why I’m out here today with this flag ... so that people remember. There were lots of ‘issues’ that resulted in the Civil War, but, right or wrong, it’s all a part of our shared heritage and I just wish everybody could look at it that way and let’s all agree that that we won’t ever allow that to happen again in America.”

“How did we get to this point?”

A former Special Forces veteran said that his heart cries for what is happening in America today.

“How in the hell did we get to this point, is what I want to know?” he said. “I watch what’s happening elsewhere, and I think, have people totally lost their minds? We all should want to try to make America a better place PEACEFULLY, but you don’t do that by looting, burning buildings, and by attacking innocent people and trashing the police. We’ve got some great officers here, city cops and sheriff’s deputies, and having lived here all my life, I think we could show the rest of the country how to do it right when it comes to the cops. That’s why, if you ask me, any outside agitators just need to stay away with their bull----. None of us want trouble but if the situation calls for trouble, me and a lot of others are ready, willing and able to stand here and protect what is ours, and to stand with our police officers and defend our heritage.”

Just to be safe

Fields told the Review that, on Friday at around 2 p.m., he called a representative of Care NET to discuss whether or not it would be safe for the group to gather.

“As things had progressed and it was looking like it could be a little rough, just from social media, phone calls, and people coming to the police department, I called her and said, ‘do you think it would be better to postpone it to a different day or cancel it this afternoon?” he said. “I explained the situation to her, and, after hearing that, she agreed. We never asked her to cancel it.”

He, too, noted that there was a lot of misinformation spread through social media.

“We were having a lot of negative feedback as far as false things floating around,” he said. “People were saying there would be destruction, protests and vandalism. I’m really not sure where that came from. We received a lot of phone calls from people saying that they were going to show up and most likely be armed. Automatically, that makes you worry. To say there was a particular threat, against the group, there wasn’t. But, any time you get armed individuals in one place, that can make the tensions a little higher and somewhat a more dangerous situation.”

Smith told the Review that there is no plan at this point to reschedule their dialogue event.

Hawkins County Mayor Jim Lee also weighed in on the event via Facebook, where he posted a photo of the rally around the Veterans Memorial along with a caption reading, “I’m not worried about the thugs destroying our town with all these Vets out here! This group knew there were no protesters coming but decided to show their support. This is not a black and white issue. There are as many white people as black burning down cities! Watch the news and all the videos.”

“That’s pretty radical language,” Smith said of the post. “That’s pretty offensive language, especially since almost every single one of us (members of Care NET) is a grandmother or grandad. This is so disheartening because our elected representatives should represent everybody. To be attacked as if you are a criminal by your elected officials?”

She went on to add that she and her fellow Care NET members “were devastated” and shocked when they saw all of the misinformation circulating on social media about the group’s event.

“I have trouble understanding what it was that ticked people off over us having a quiet meeting or the idea that we were somehow ‘outsiders,’” she said.

Though their club has a Facebook page, Smith said that the club’s members “don’t personally don’t follow social media like the younger folks do,” as very few of Care NET’s small club are even under the age of 50.

“We had no idea that it would turn out this way,” she said. “We just thought we were going to be supportive. We think that we do need to improve our racial justice in this country. We need to continue on to improve it. We have the civil rights act, but we need to continue on. In some people’s minds, this is way in the past. In others’ minds, the Civil War isn’t over yet.”

Police said Monday that “everything was quiet” and that the events went forward without incident.