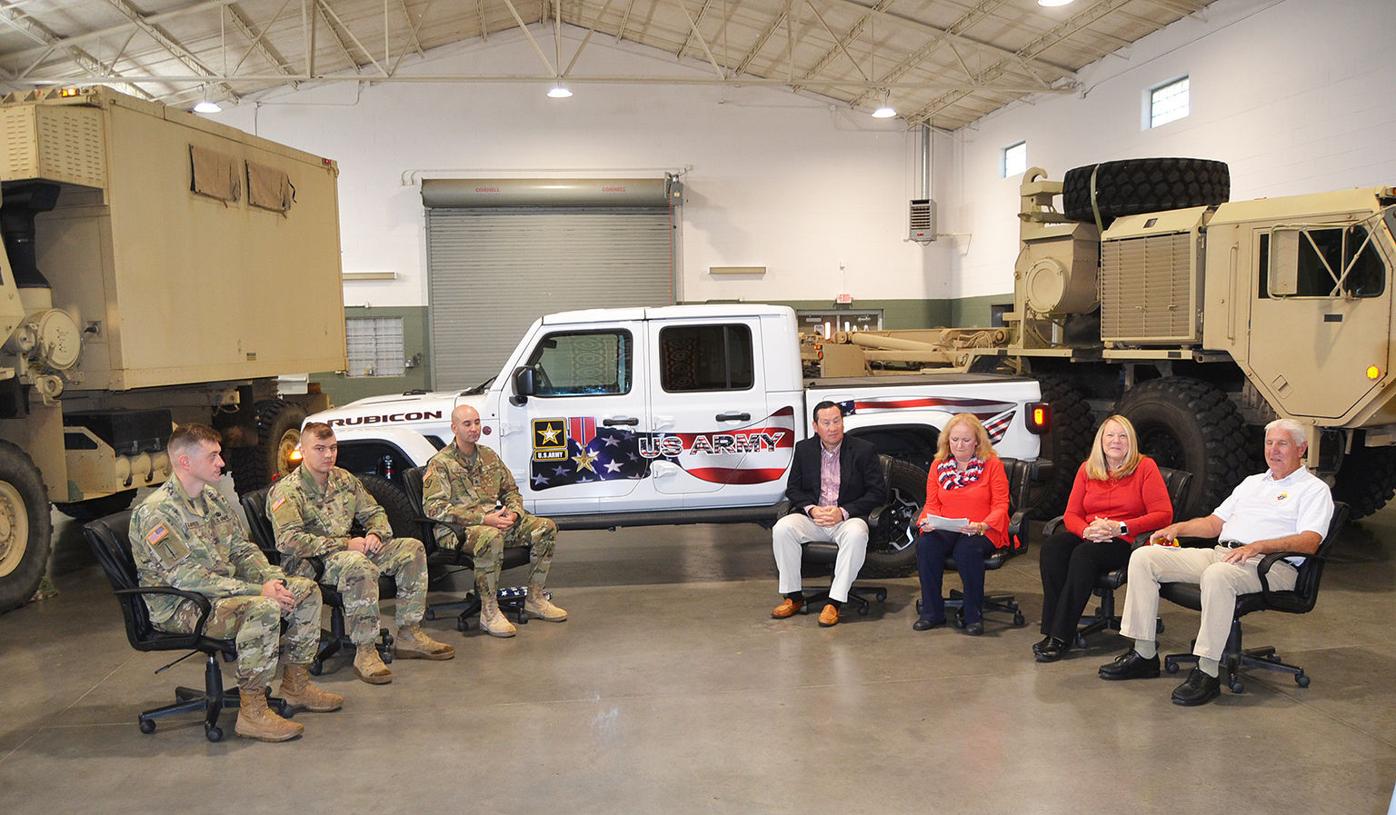 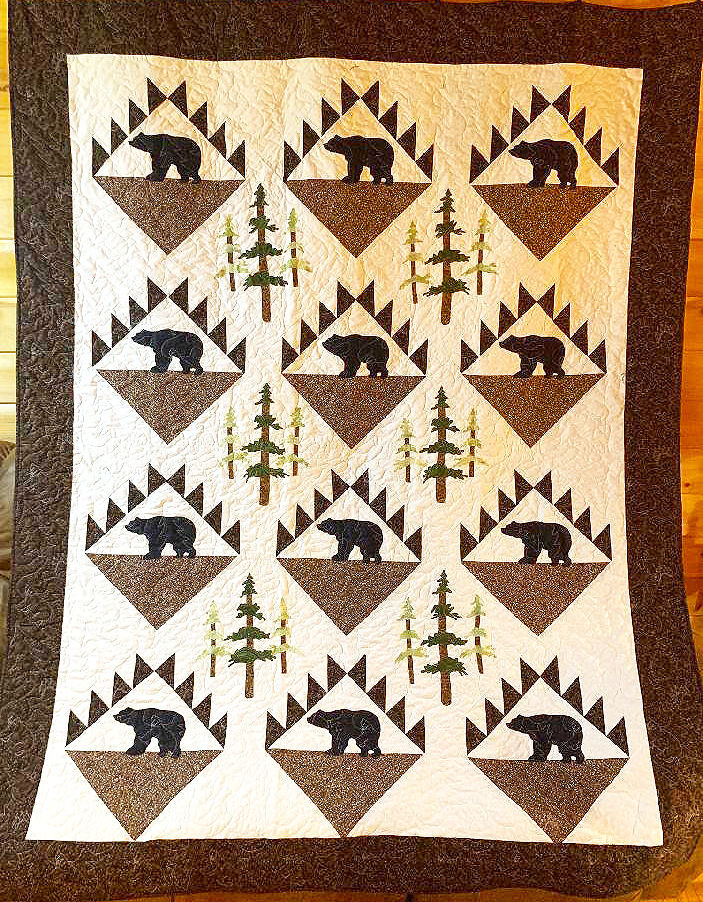 The Killer Covid Bear Quilt is part of the fundraiser for the Knights of Columbus. 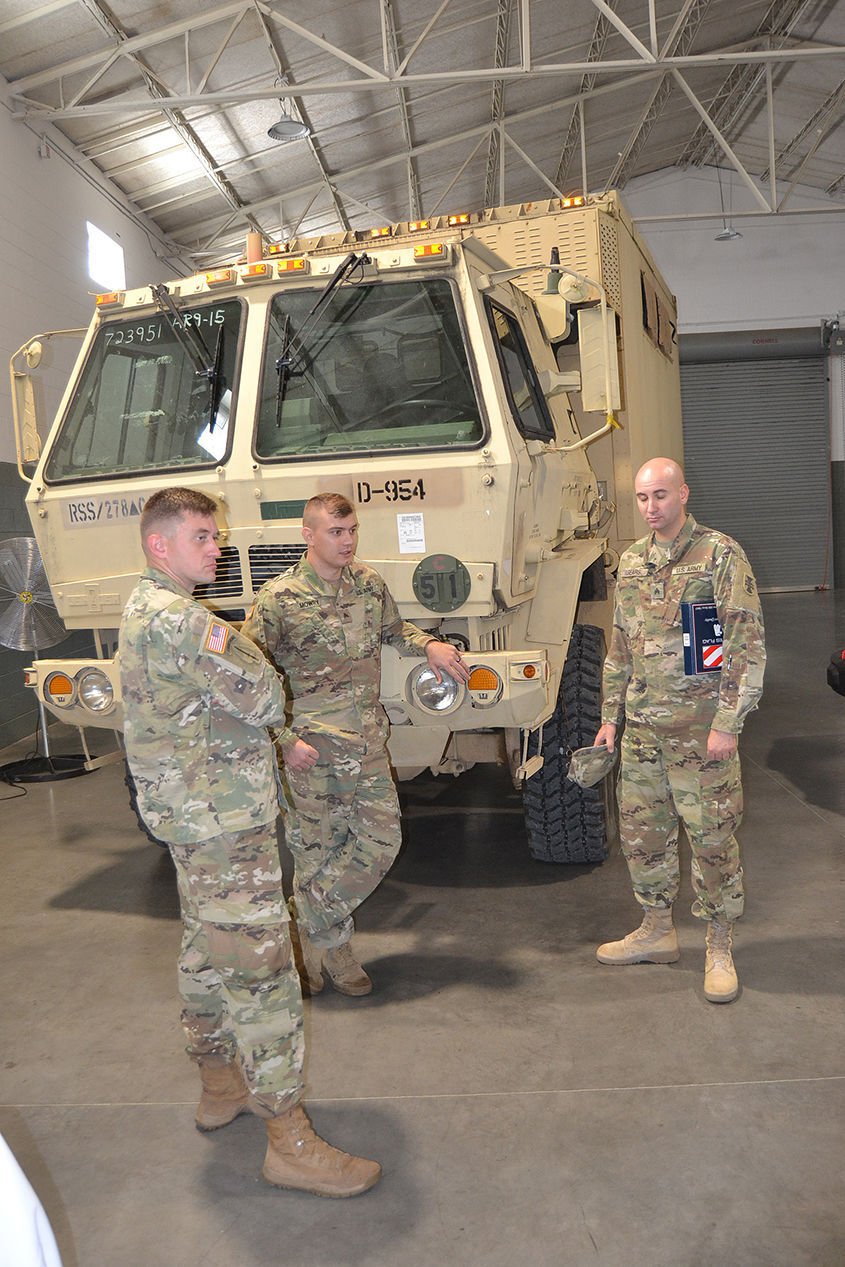 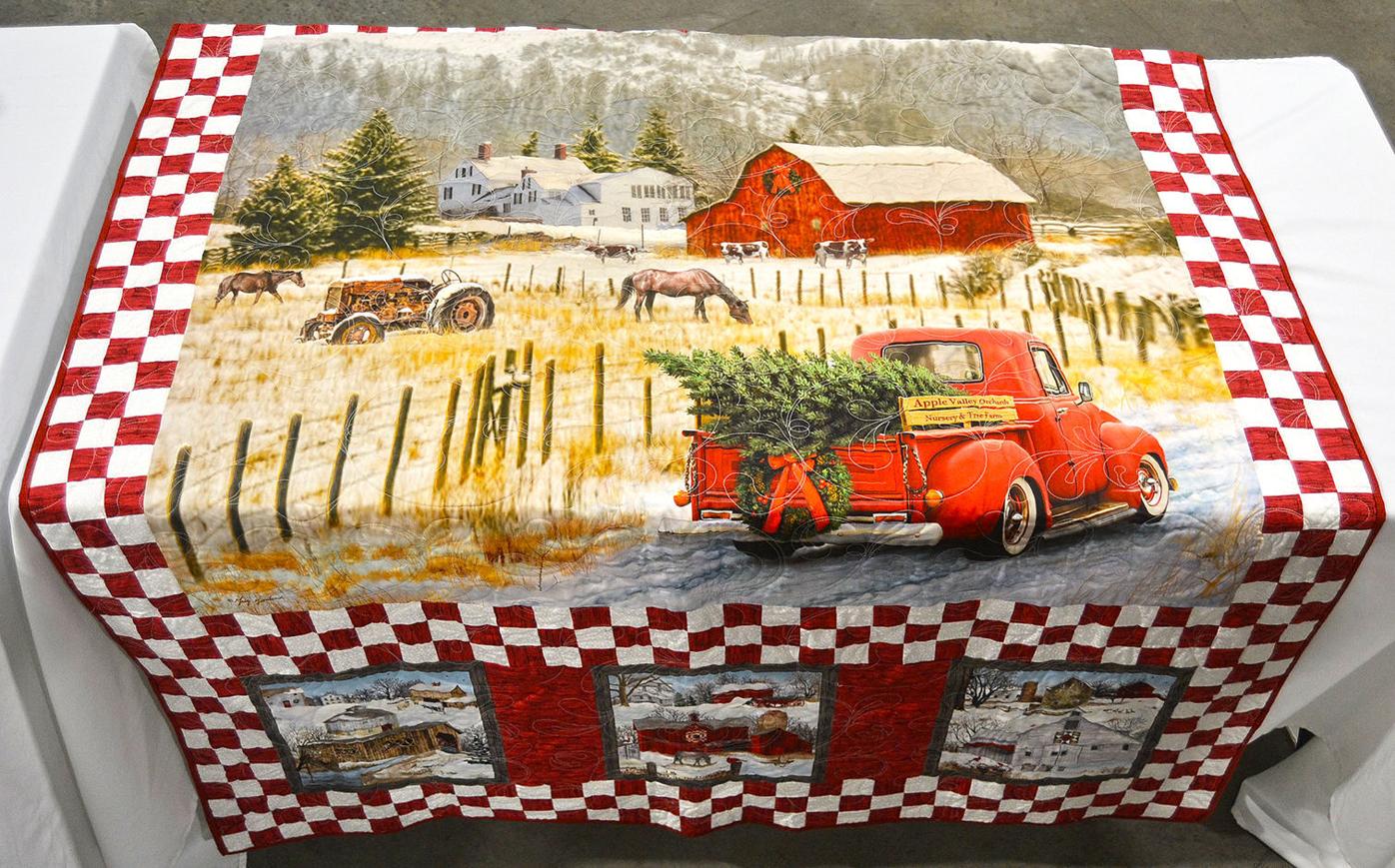 Tickets sold to win this quilt will help support the Chamber of Commerce.

The Killer Covid Bear Quilt is part of the fundraiser for the Knights of Columbus.

Tickets sold to win this quilt will help support the Chamber of Commerce.

ROGERSVILLE – The 2nd Annual Project Serve Our Soldiers Craft Fair will be held Oct. 30-31 at the Rogersville National Guard Armory.

The fair is a fundraiser for Project Serve Our Soldiers (PSOS), a non-profit organization located in Rogersville.

“We are having the fair right here in this building, which is the National Guard building,” Weart said. “This is their drill home. They are gracious enough to allow us to do these things.

“The goal and the mission of Project Serve Our Soldiers it to provide comfort for Hawkins County residents who actively serve in the military, and their families, on foreign and domestic soil, through fundraising efforts and donations,” Weart said.

“An additional goal is to meet many of Hawkins County’s community needs, independently, or in conjunction with other Hawkins County organizations. Through the fundraising efforts and donations in 2019, Project Serve Our Soldiers was able to provide ‘comfort boxes’ to nearly 200 U.S. military men and women who are actively serving abroad in places like Jordan and Bahrain,” Weart said.

“Today, we have brought in Sgt. Ryan Sears, who was the recipient – and his fellow soldiers – in Jordan,” Weart said of PSOS care packages sent to Hawkins County soldiers deployed out of state or abroad.

Sears, was a 2019 recipient of comfort boxes while in Jordan. At that time, Sears was deployed with the 655{sup}th{/sup} HHC Regional Support Group (RSG) of the US Army Reserve. Sears said the comfort boxes were well-received.

“It was a wonderful gesture. Stuff like this really builds up morale for the soldiers who are over there. It makes them feel like they really have the support of the people back here. A lot of the things they’ll take to the field with them such as snacks, they’ll take them out to the field or the job,” Sears said.

“Other things, some of the big items, we really enjoyed were the letters and cards we got from people. We had a few school classes that would send us letters, and some of the kids would draw us pictures. Those were really wonderful things that really helped you to be motivated to go out and do the best that you could do on whatever mission you are given. So, having that and knowing that when you come back home you still have that kind of support from the people here,” Sears said.

“I want to thank Corki and everyone who helped with it, and Project Serve Our Soldiers for that. It is a wonderful thing. I’m so glad that we got to do that and I’m glad that I have people like that who are here in the community to show us that kind of support while we were away from our families,” Sears said.

Sears presented PSOS with a flag that flew over their base in Jordan, as well as two Challenge Coins representing “Area Support Group — Jordan” and Sears’ section, which created their own badge of appreciate for PSOS. “That’s for this community,” Sears said, in recognition of what the community did for them.

“We also were able to provide comfort bags to them when they were deployed to Washington, D.C.,” Weart said.

In late spring/ early summer of 2020, approximately 30+ members of 278{sup}th{/sup} were called up and deployed from Rogersville to Washington, D.C. With just four hours of notice, PSOS was able to pack up a 10-day supply of energy-boosting snacks for each soldier to add to their bags.

“The comfort packages meant a lot to us and our unit when we were away,” Mowry said. “When we get placed on missions or tasked to do things, we’re away from home, we’re away from our families. You’re not always given the most ideal things that you’re used to every day when you’re home with your family. You can go down to the gas station or the cupboard to get it, a drink or a candy bar, whenever you want.

“When we’re pushed out somewhere else, we don’t have that access. Being able to be supported by Project Serve Our Soldiers, we get things that we can normally have when we’re at home, and giving us that comfort, takes our minds off – even if it’s for a minute – off of what we’re doing to remember our home and families. It’s something to look forward to, as well. Because then we remember, I have this. I’m working to complete this mission so I can get back. It’s very uplifting. It’s great for unit morale. When it’s down, it’s surprising how much it means just to go get a candy bar. It does make a big difference in what we do, having that support of the community and people back home and groups like Project Serve Our Soldiers.”

“This is just a few of the recipients,” Weart said. “We also have the other branches. Whether they’re deployed overseas or they’re here right on our own domestic soil, we do reach out. We want our people to know we are there for them.”

This year’s craft fair will be larger as two other organizations are joining.

“This year the pandemic seriously impeded on the fundraising efforts of the Chamber of Commerce, The Knight of Columbus and Project Serve Our Soldiers,” Weart said. “The 2020 Project Serve Our Soldiers Craft Fair, October 30{sup}th{/sup} and October 31{sup}st{/sup}, is hoping to help these three organizations continue in their efforts of meeting the needs of the communities of Hawkins County.”

“So many activities have had to be cancelled,” Barker said. “One of our major fund raisers we had to cancel. When Corki offered us this opportunity to be a part of this, it was such a great idea. Being the great people that they are, Bill’s wife actually put us a quilt together to receive donations for a raise money for that.

“We’re very honored to be a part of Serve Our Soldiers and help with the promotion and advertisement to encourage more people to come to this event and try to raise as much money as we can. Because we never know when we get to keep these guys or if we’re sending them off somewhere. We always want to be able to provide for them what they need as they’re going to whatever destination or if they’re just serving the community,” Barker said.

“We’re just pleased to be a part of it. We’re very excited. It was kind of a small event and it’s grown. We’re hoping it will continue to grow and be able to support our community, as well as our servicemen,” Barker said.

“Our mainstay is charity. We provide for the needs within the community. That’s one of our main pillars within the Knights of Columbus. We have four pillars – charity, community, fraternity and patriotism,” Hewitt said.

“I can relate to what Project Serve Our Soldiers does specifically. Even though I’m generations apart from these gentlemen sitting across from me, I know what welcome those packages mean. Ours was a jungle, there’s has been in the deserts and sands and urban environments of the country today,” Hewitt said.

“You can get out there and get disconnected from where you were. But this kind of brings you back to that,” Hewitt said.

“Corki has offered us the opportunity to provide food concessions here for the upcoming craft fair. We have what’s called, thanks to Nancy, the Killer Covid Bear Quilt that my wife has made, as well as the quilt on the table here that we’re accepting donations for and we’re going to draw a ticket for that in December. We’ll have it on display Oct. 30 and 31{sup}st{/sup} at the Craft Fair. We’ll provide food for the crafters as well as those patrons that come in on those days,” Hewitt said.

Weart said Friday, Oct. 30 and Saturday, Oct. 31 will be good days for the event.

“Most Halloween events have been cancelled. The hours for our shoppers will be from 10 a.m. to 6 p.m. This room is going to be filled with venders. We have very few places left at this point. We do have a few still left,” Weart said.

Some of the other vendors will have for sale art, candles, figurines, oils, soaps and live entertainment by guitarist Gene Lane.

“We’ll have drawings on the hour every hour,” Weart said. “We have a roomful of gift baskets for those drawings. We have a cedar chest that was donated. Its value is over $100. It’s hand-made and crafted. Our representative, Gary Hicks, will come in at 3 p.m. Saturday to have our grand finale drawing for us for that.”

“That spirit of volunteerism back then, boy can you can feel it this morning, not only to the people to my right (the soldiers), but to the people to my left (the fund-raisers),” Hicks said. “While this event, as Corki is talking about how much fun it’s going to be, it’s very important. The reason it’s very important is because you hear what it means to these gentlemen on the right (the soldiers).

“Because the funds that are going to be made from the event from the craft bazaar — my goodness I don’t know if you can have a better mission as you go into this craft bazaar than to know it’s going to go toward our soldiers and support them and their families, while they’re wherever they may be supporting us,” Hicks said.

“That’s humbling sitting here this morning thinking about that. There are so many people who are going to be involved with this craft bazaar and so many who wanted to help but couldn’t because of COVID-19. Well, now you have your opportunity. If you’ve been wanting to do something but didn’t know what to do. Maybe your event was cancelled. Here’s you opportunity to come down on Oct. 30-31 and support all these folks,” Hicks said.

“Hawkins County and surrounding communities have a lot of folks who are very talented. They can come and show off those talents and again, it’s going to be for a tremendous cause. I encourage you to practice your social distancing and come out and support these folks,” Hicks said.

Anyone interested in reserving a booth or making a contribution to PSOS, can email Weart at: corki.weart@gmail.com