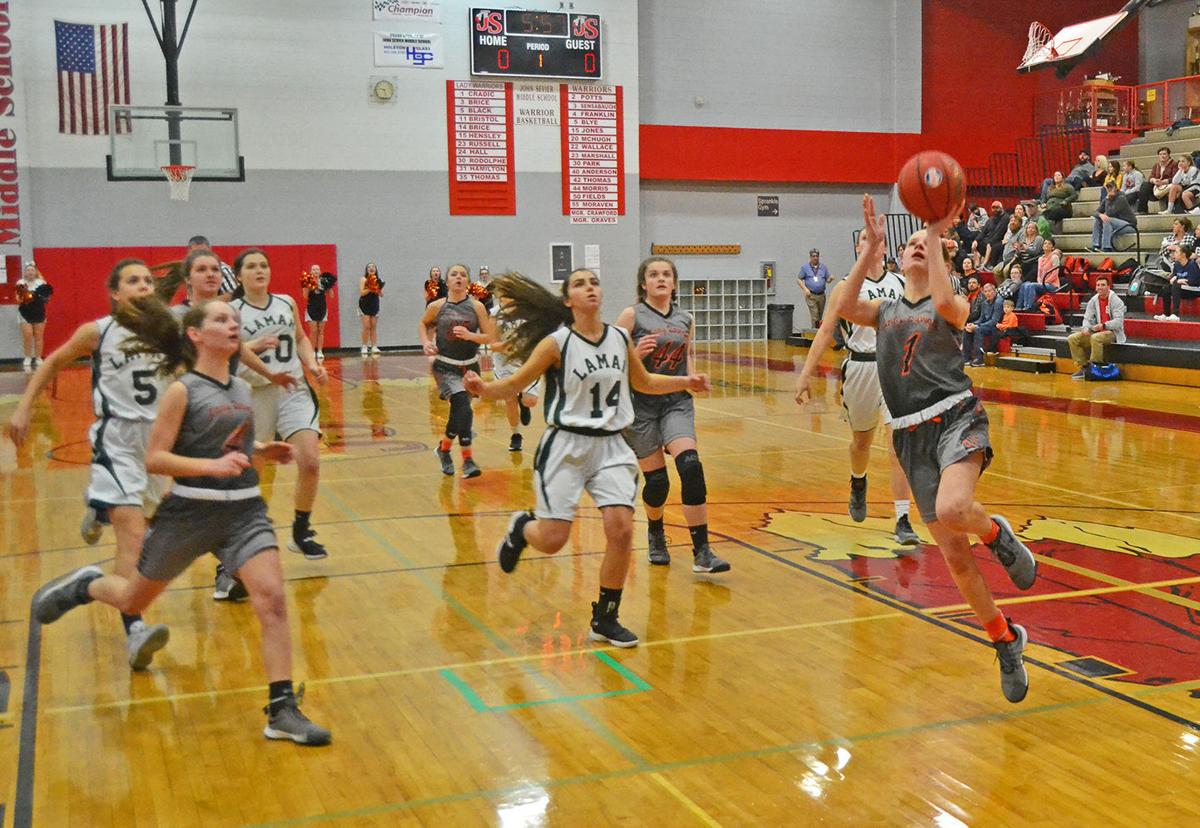 Bulls Gap’s Emma Houck (1) scores a layup off the opening tip against Lamar in the Lady Bulldogs’ 37-34 victory over Lamar in the quarterfinals of the Section 1 Class A girls basketball tournament Wednesday at John Sevier Middle School. 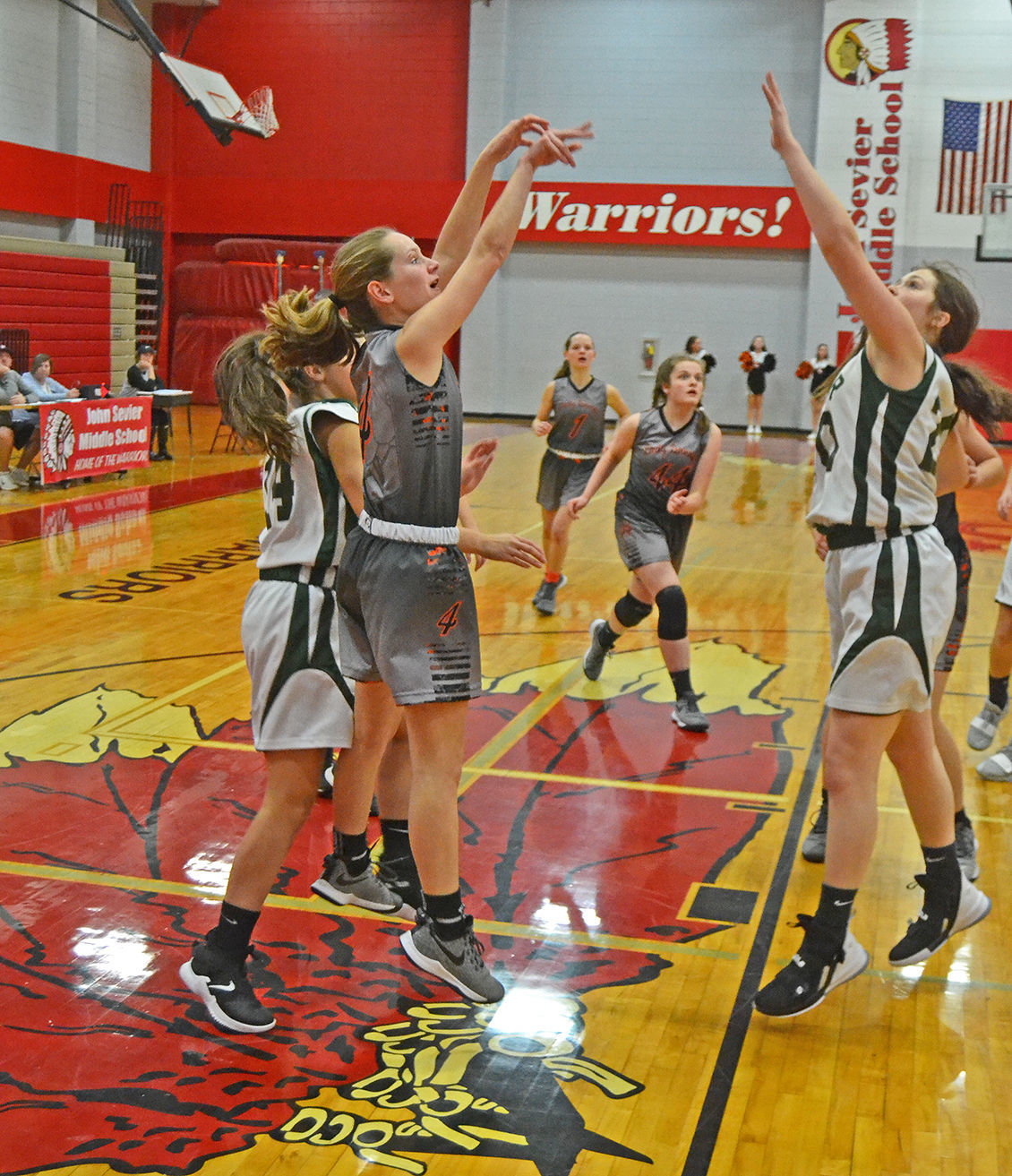 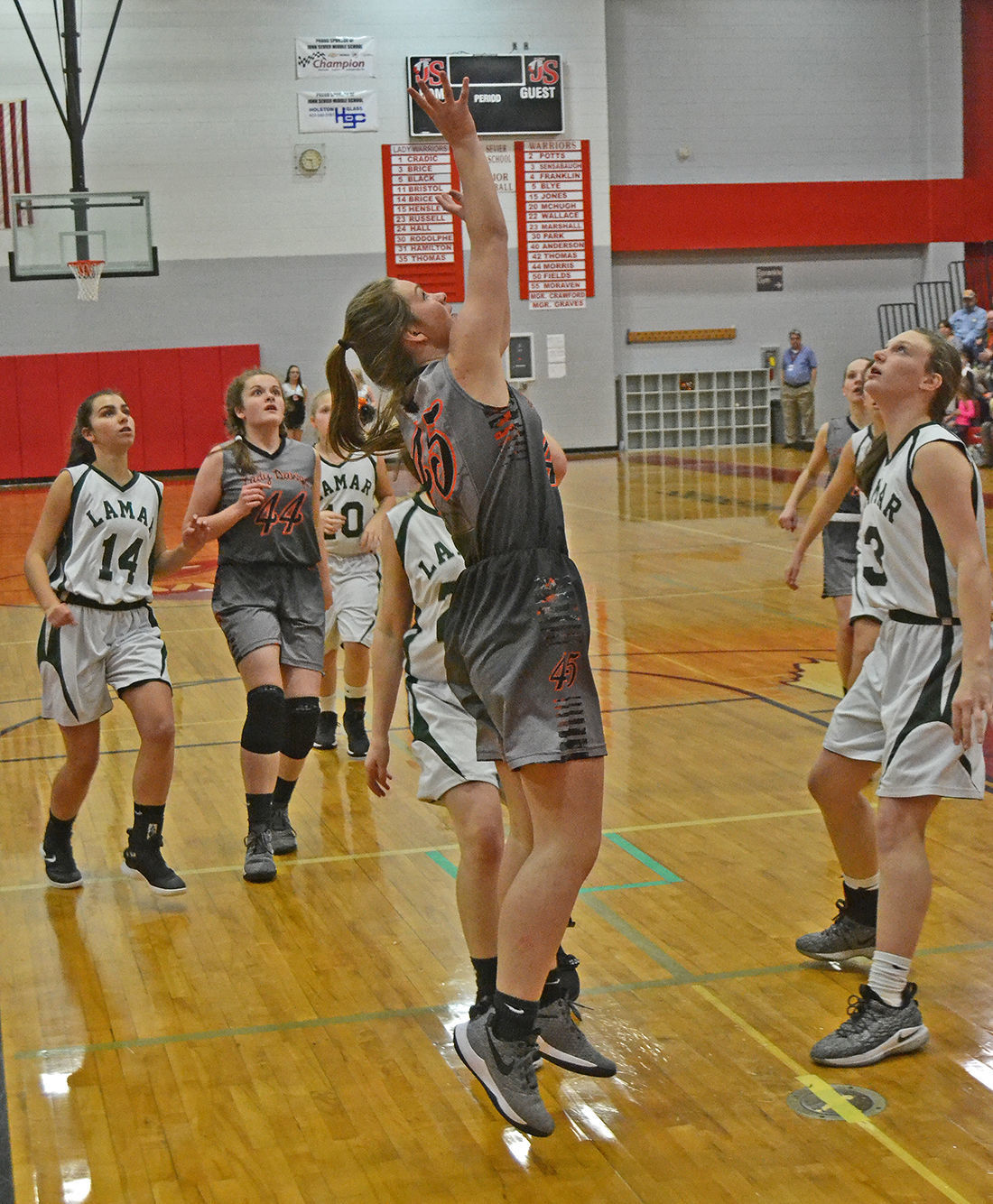 Bulls Gap’s Madi Jones (45) goes up for a rebound. 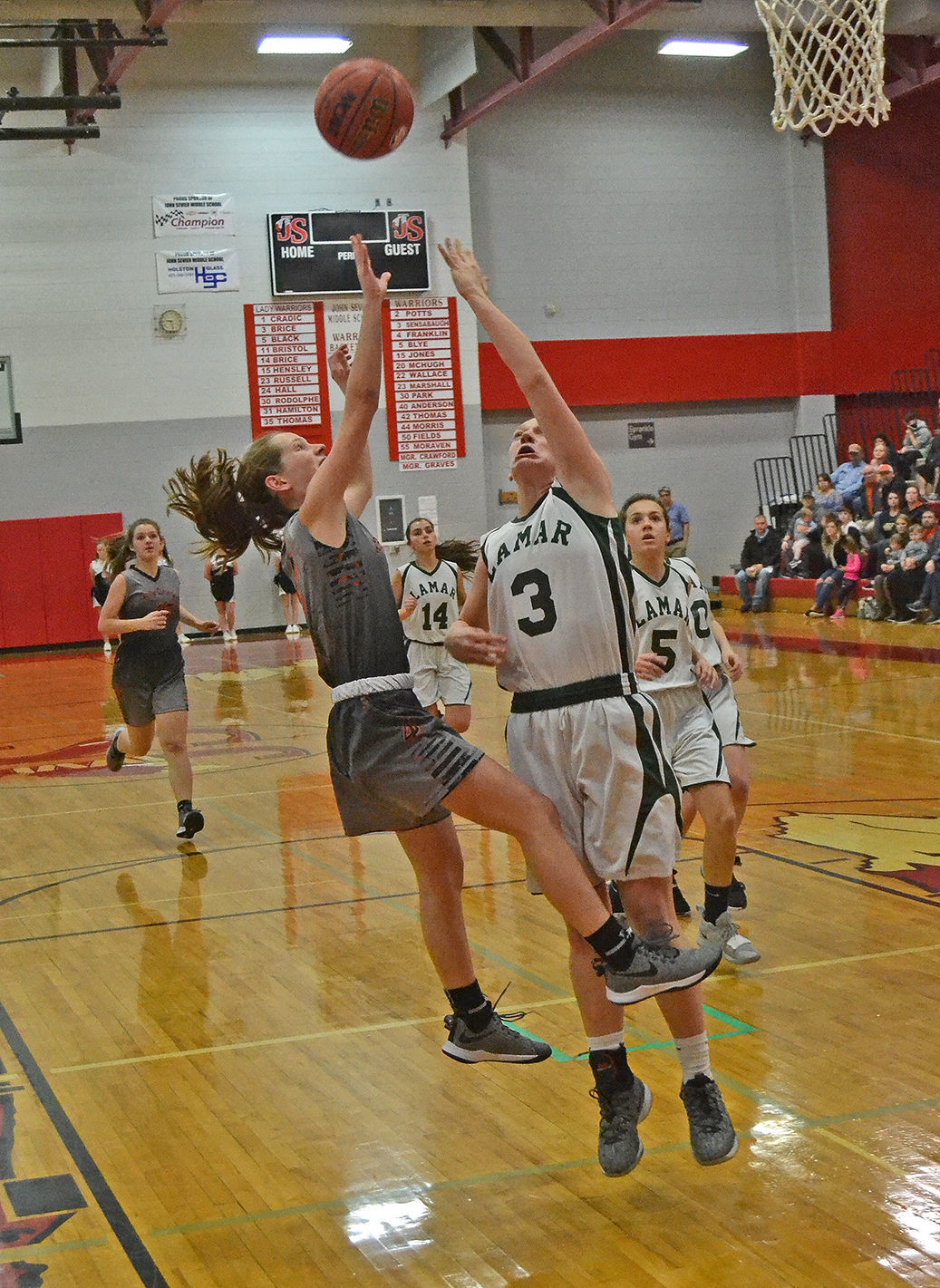 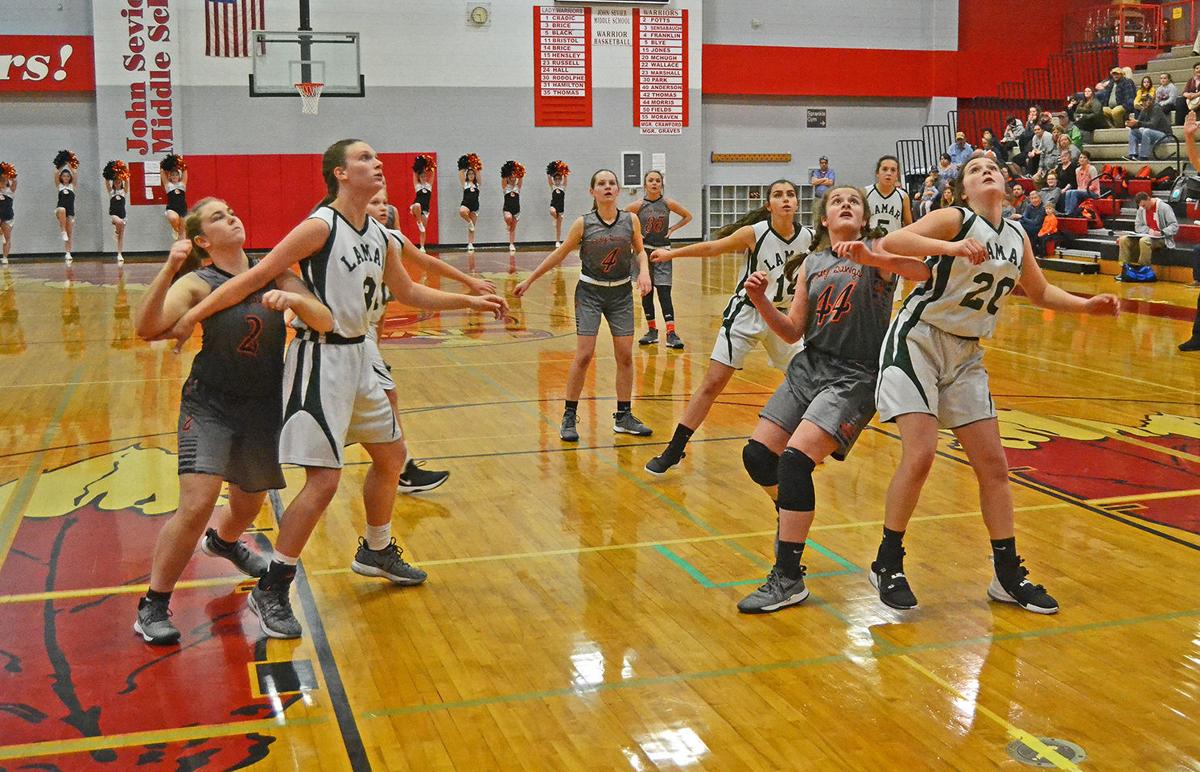 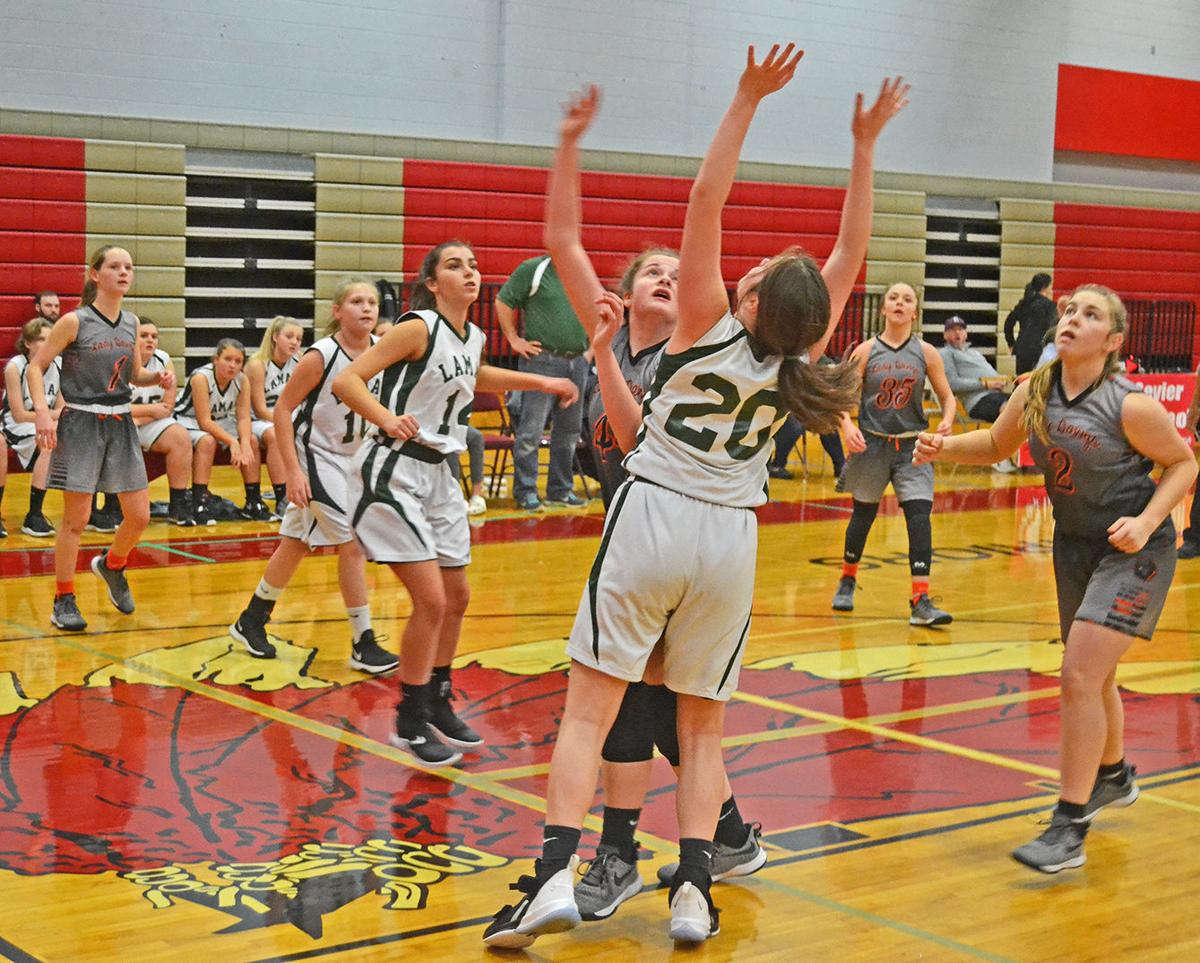 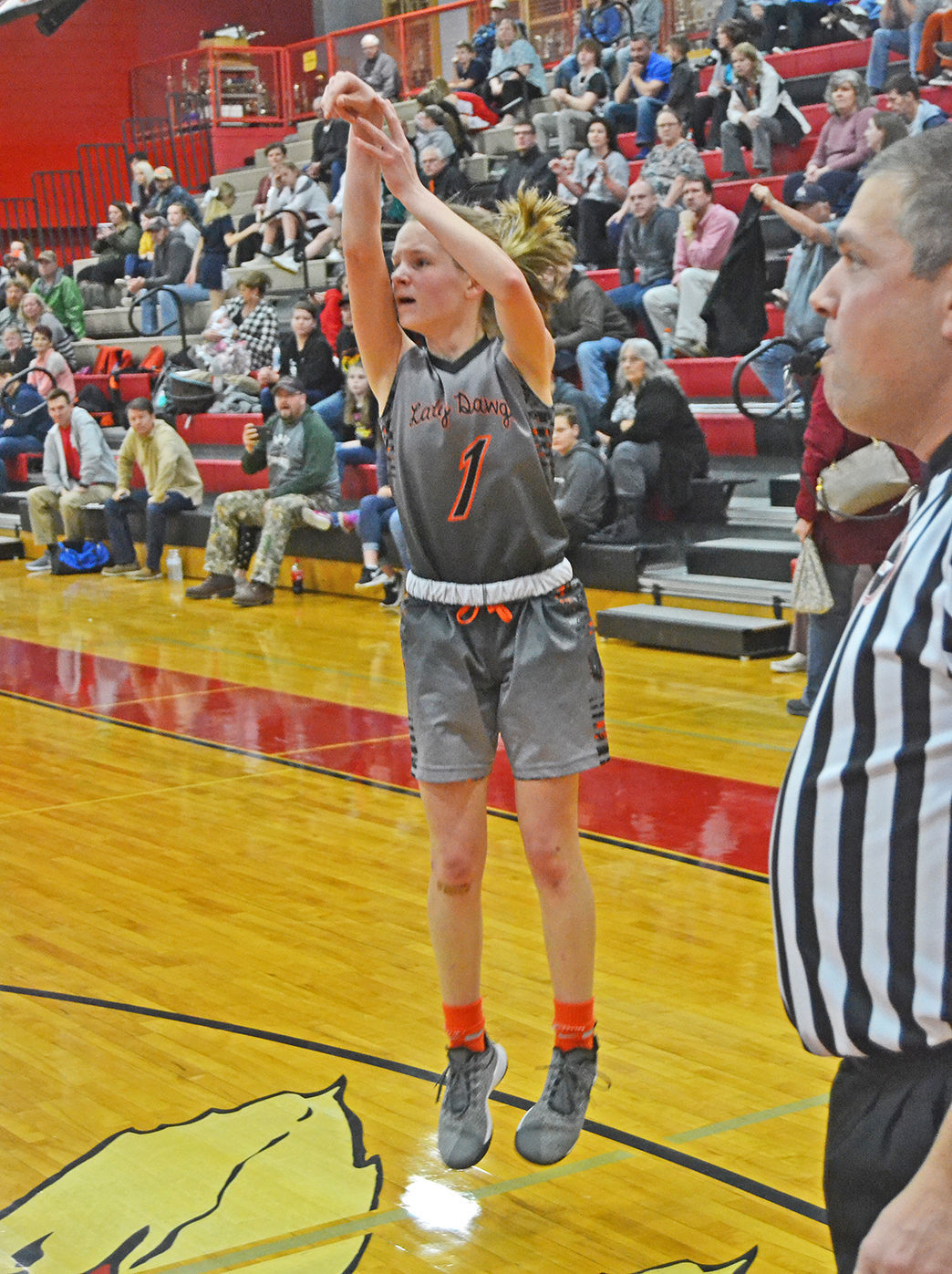 Bulls Gap’s Emma Houck (1) goes up for a jumper. 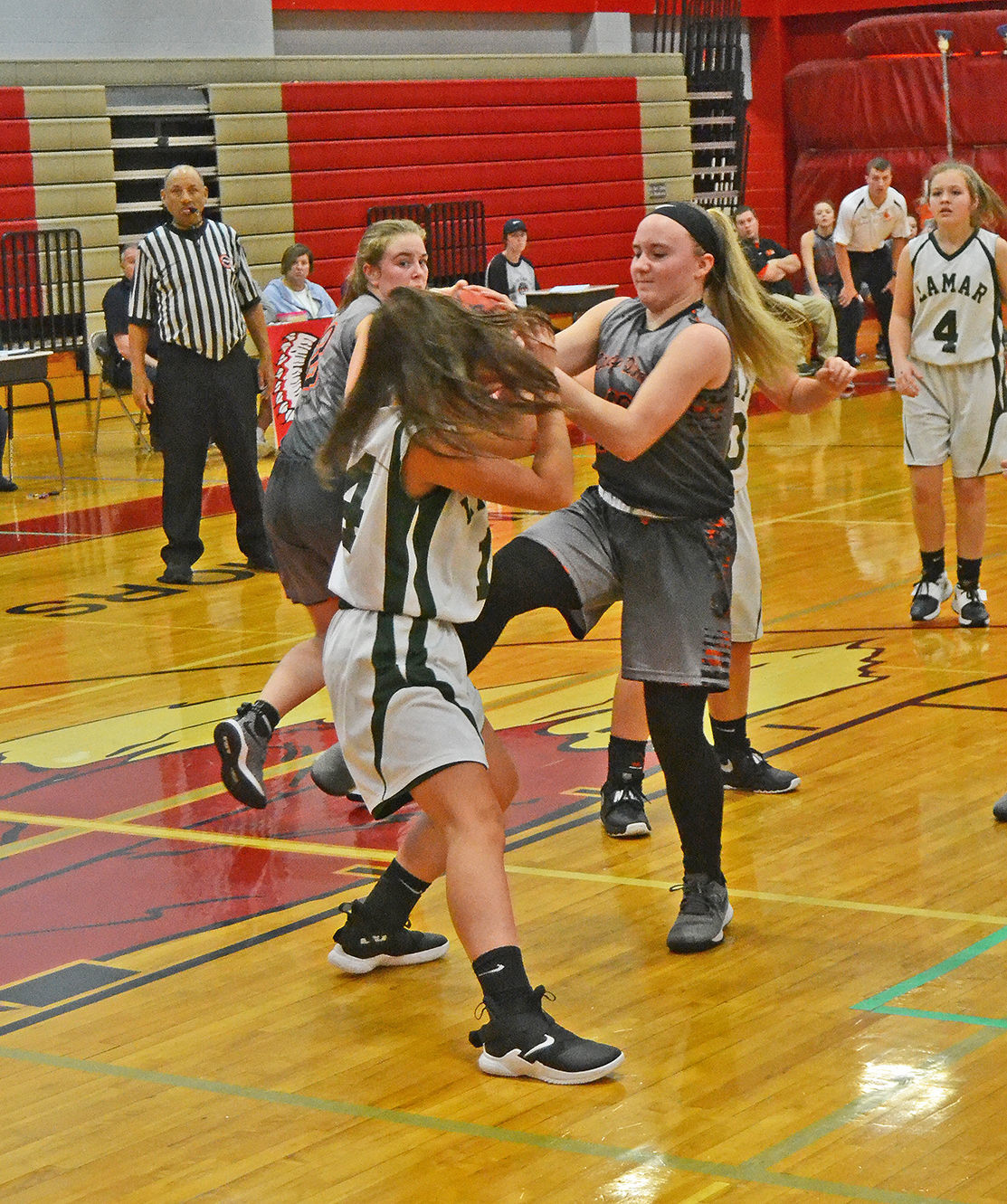 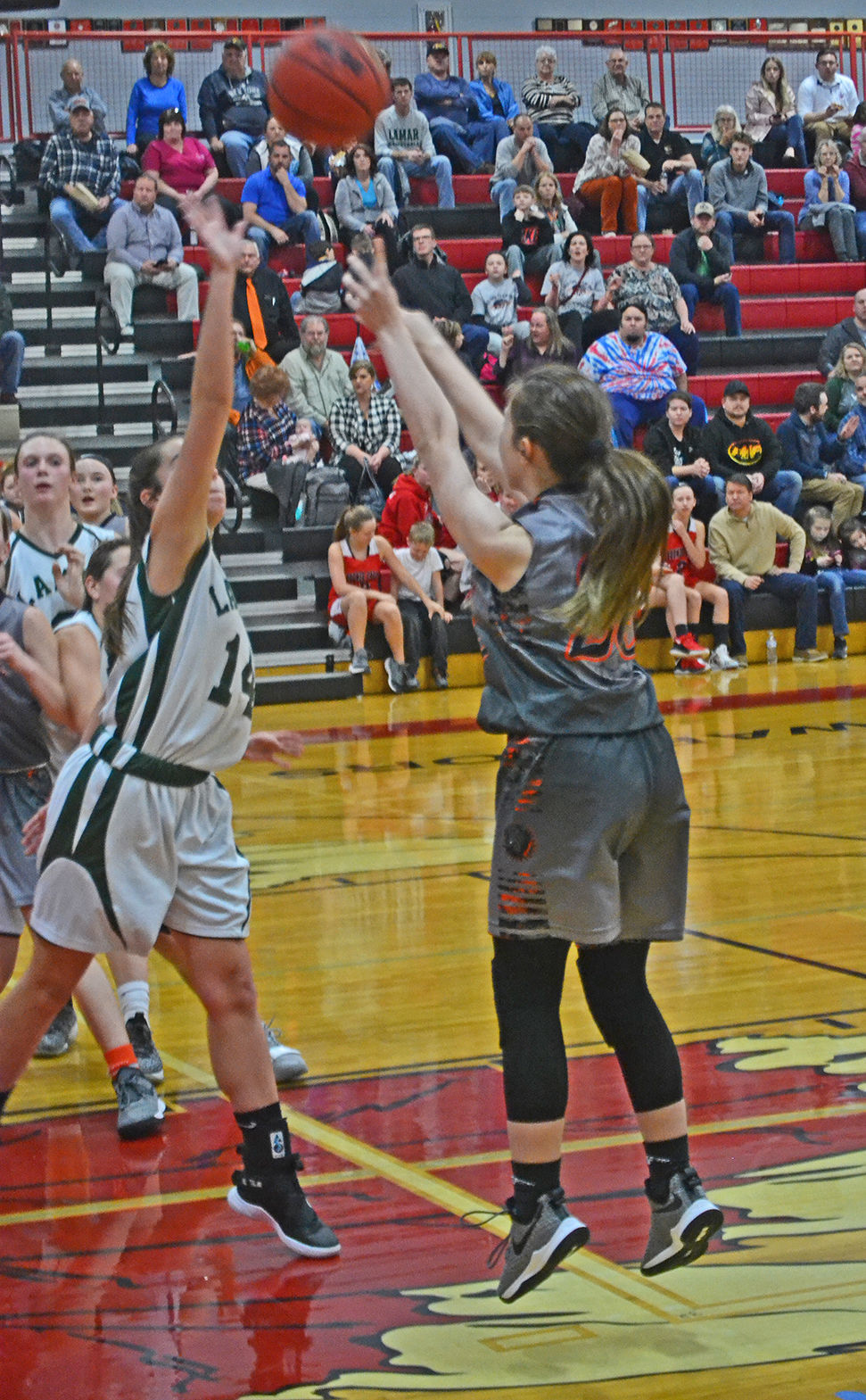 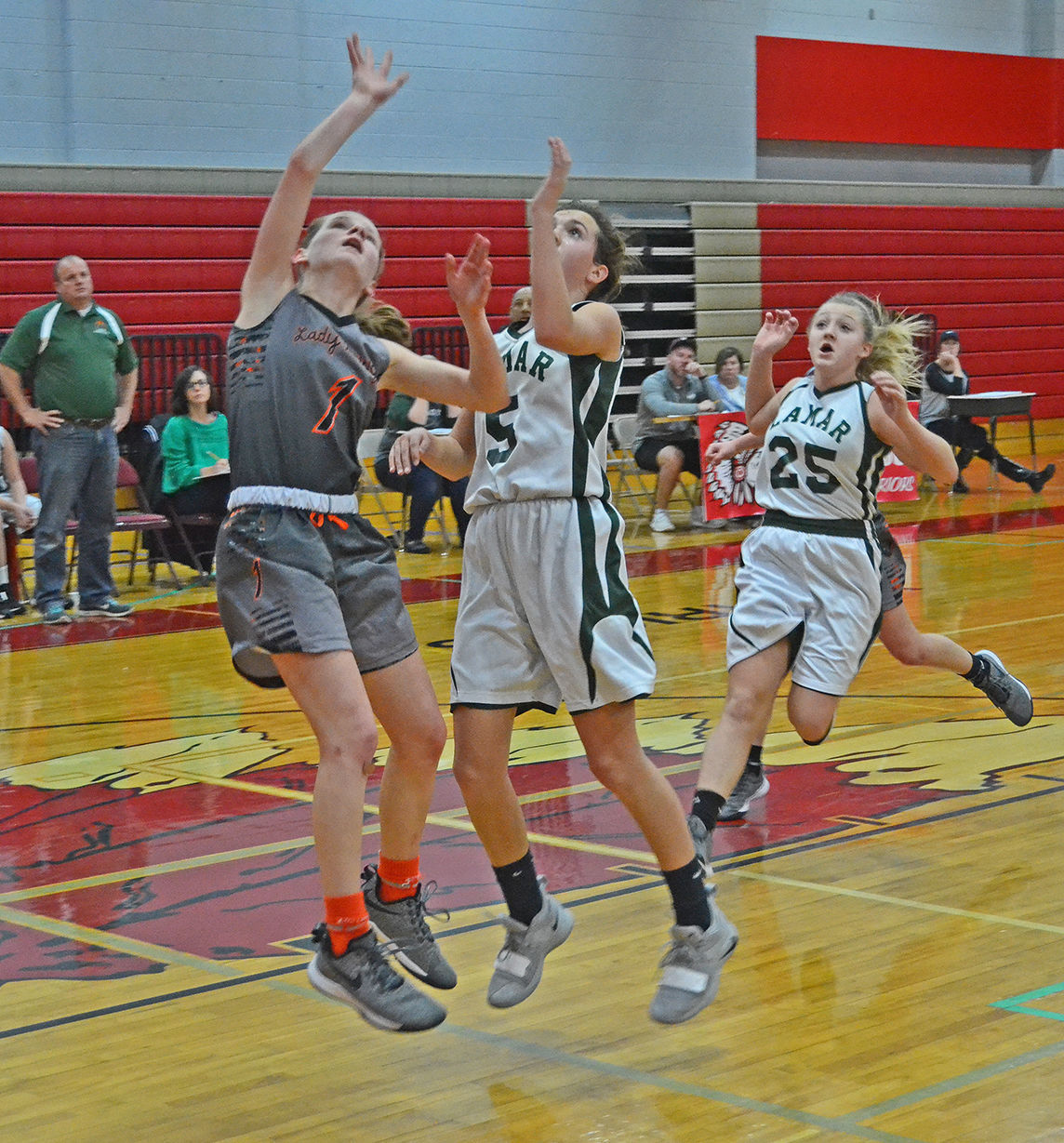 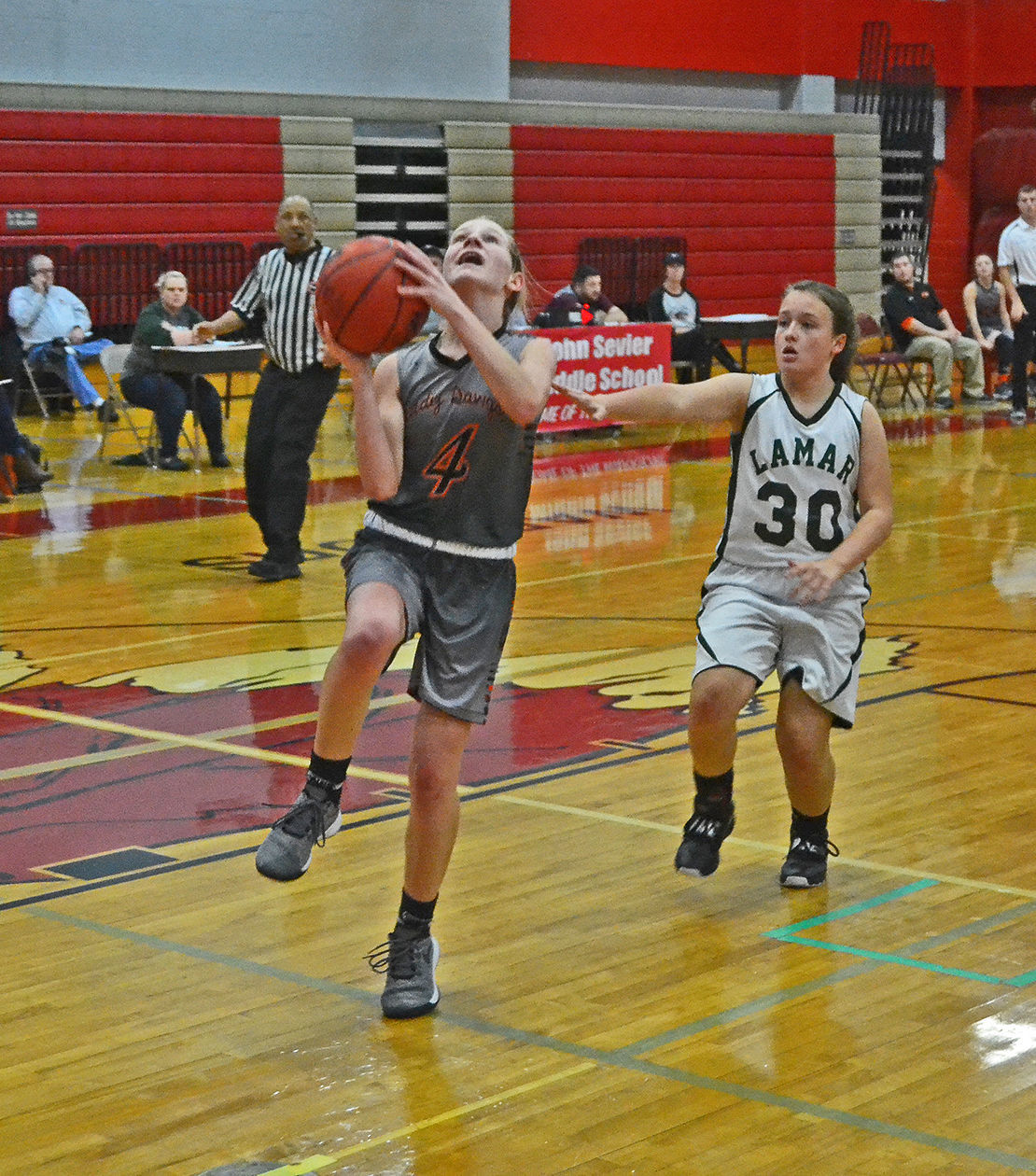 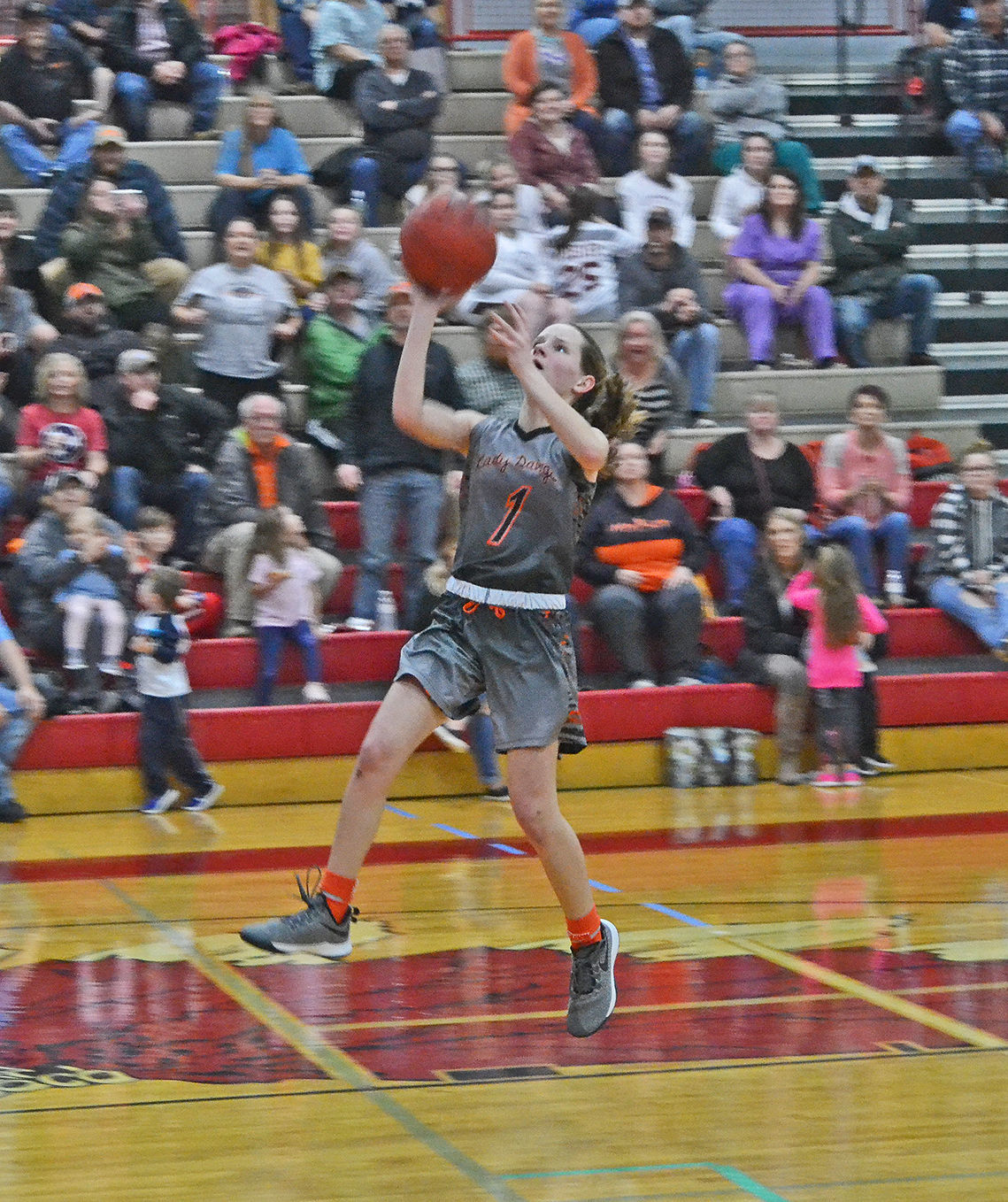 Bulls Gap’s Emma Houck (1) drives in for the game-clinching basket with 40 seconds remaining.

Bulls Gap’s Emma Houck (1) scores a layup off the opening tip against Lamar in the Lady Bulldogs’ 37-34 victory over Lamar in the quarterfinals of the Section 1 Class A girls basketball tournament Wednesday at John Sevier Middle School.

Bulls Gap’s Madi Jones (45) goes up for a rebound.

Bulls Gap’s Emma Houck (1) goes up for a jumper.

Bulls Gap’s Emma Houck (1) drives in for the game-clinching basket with 40 seconds remaining.

(Note: due to the Review’s press deadlines, Thursday night’s sectional semifinal game between Bulls Gap and Ridgeview was not available for our print edition and is covered in our online Review. Here is the account of Bulls Gap’s win in the quarterfinals on Tuesday.)

KINGSPORT – Bulls Gap jumped out to a great start then held on for dear life to eke out a 37-34 victory over Lamar Tuesday evening in the quarterfinals of the Section 1 Class A girls basketball tournament at John Sevier Middle School.

With the win, Bulls Gap (22-2) advances to a semifinal matchup with Ridgeview, set for a 7:30 p.m. tipoff Thursday at John Sevier.

It didn’t look like there would be any doubt of that in the first half, as the Lady Bulldogs’ patented press and 3-2 defense forced several Lamar turnovers which led to numerous layups by Bulls Gap, which jumped out to an 11-2 lead and led 15-7 after one quarter and 26-13 at halftime.

“The real key was when we could get in our press,” said Bulls Gap coach Shawn Bond. “I thought we did a pretty good job rotating. We had a couple bad breaks on balls that got tipped and kind of went their way, but I thought when we could get out in transition, it was real good for us.”

When their press is working, the Lady Bulldogs can be an overwhelming force. Each member of the team does their part in disrupting the opponent’s attempt to bring the ball up court, whether it be the relentless trapping by twins Anna and Emma Houck, tipping away passes by Kaylee Cinnamon and Brayley Bowlin, of stepping into passing lanes for interceptions by Ariel Ferrell and Madi Jones.

All cylinders were firing Tuesday and Bulls Gap was a formidable machine.

“We could speed them up,” Bond said. “They struggle sped up.”

The Lady Bulldogs started the third quarter well enough, actually building 14-point leads twice, the latter on a layup by Jones with 3:31 that put Bulls Gap ahead, 31-17.

Then things suddenly went sour. The Lady ‘Dawgs committed four turnovers in their five final possessions of the period leading to an 8-0 Ridgeview run to close the quarter to within 31-25.

The struggles continued in the fourth as Bulls Gap committed two more turnovers to start the period. Two free throws by Sophia Gouge pulled the Lady Cherokees to within 31-27 with 5:43 to play in the fourth and extended the Ridgeview run to 10-0.

“The second half we struggled,” Bond said. “We turned the ball over too much. I thought we came out flat, kinda thought we had it.

“Lamar is a good team and a bunch of eighth graders are not going to lay down when they know it’s the last half. I think that was a lot of it. They came out and played harder than us in the second half,” Bond said.

Bowlin snapped the drought with a steal and layup at the 5:15 mark to put Bulls Gap back up, 33-27. Emma Houck followed with the same moments later, increasing the advantage to 35-27 and forcing Lamar to call timeout.

The Lady Cherokees came out with a good strategy: exploit the one weakness in the 3-2: the backside, where defenders can end up with too many to block out when everyone crashes the boards.

“There are holes in each defense,” Bond said. “Of course, they’re big as a team. They don’t really have a small girl. They all crash the boards. That’s what they like to do. They like to work it inside.”

With 4:06 left, Hailey Wilson, a thorn in Bulls Gap’s backside all night, worked herself loose for a put-back to cut the Lady Dawgs’ lead to 35-29.

“We’ve been doing a good job all year on our 3-2 on our backside fronts and the backside guard drops for backside help,” Bond said. “We were a little late tonight getting to the front. We were just kind of stuck in the mud, especially in that second half.”

After another Bulls Gap turnover, the Lady Dawgs forced two in a row by Lamar, getting the ball back after a timeout with 2:24 to play.

The Lady ‘Dawgs then tried to burn some clock, always a tricky proposition no matter what the level of play. After Bulls Gap burned 40 seconds off the clock, the Lady Cherokees committed a foul and called timeout at the 1:44 mark.

The Lady Dawgs inbounded the ball, but after a few tenuous passes, turned it over to Lamar with 1:17 to go. The Lady Cherokees got it to Wilson in the post. She scored, was fouled, and hit the free throw to cut Bulls Gap’s lead to 35-34 with 1:05 remaining.

The Lady Dawgs’ half-court offense still shaky, Bulls Gap committed a backcourt violation, giving it back to Lamar with :52 remaining.

But the Lady Bulldogs giveth and the Lady Bulldogs taketh away. Perhaps leaning on the experience they attained last year in reaching their first-ever sectional tournament, which ended in a disappointing quarterfinal, this year’s Lady Bulldogs forced a Lamar turnover, and Emma Houck raced full-court to convert a layup to increase Bulls Gap’s lead to 37-34 with 40 seconds remaining.

Rather than settle contently, the Lady Bulldogs remained aggressive and forced another turnover on Lamar’s ensuing possession with :30 left to play.

The Lady Bulldogs worked the ball around more confidently this trip and Ferrell got free on the baseline. Her shot was awry and the loose ball deflected off the leg of the Lamar defender, who was right next to Ferrell, at whom the referee pointed as he awarded the ball to Lamar and sent the Bulls Gap contingent to its feet in protest with :14 left in the game.

Lamar worked the ball inside but was unable to get a clear shot and the two teams scrambled to tie up the ball with :02 left. Alternating possessions gave it to Lamar, which inbounded to Gouge, who drove against Emma Houck and put up a shot that fell short at the buzzer, sending the Lady Bulldogs to the semifinal round of the sectionals, the deepest run in school history, topping last year’s 18-8 Lady ‘Dawgs.

Emma Houck and Anna Houck scored 14 points apiece to lead Bulls Gap. Anna scored all 14 in the first half, while Emma had eight in the first and six in the second, including the game-clincher with :40 left in the game.

Bowlin added four, Ferrell had three and Jones had two. All were crucial in moving Bulls Gap forward.

Bulls Gap, Area 3’s No. 1 seed, now will do battle with Area 2’s No. 1 seed, Ridgeview, which easily dispatched Hunter in the game before Bulls Gap’s contest Tuesday.

“We haven’t played Ridgeview yet,” Bond said. “They’re pretty tough. They basically play five guards. They’re kind of like us. They like to get up and down and play in-your-face defense. We’ll see. I know Nolachuckey beat them, but that’s about all I know really.”

Bulls Gap defeated Nolachuckey in a tight battle, 41-39, in the championship game of the TMSAA Area 3 tournament last Wednesday at Volunteer.

Bond said the key to winning the sectional semifinal this Thursday will be how effectively Ridgeview can handle Bulls Gap’s press.