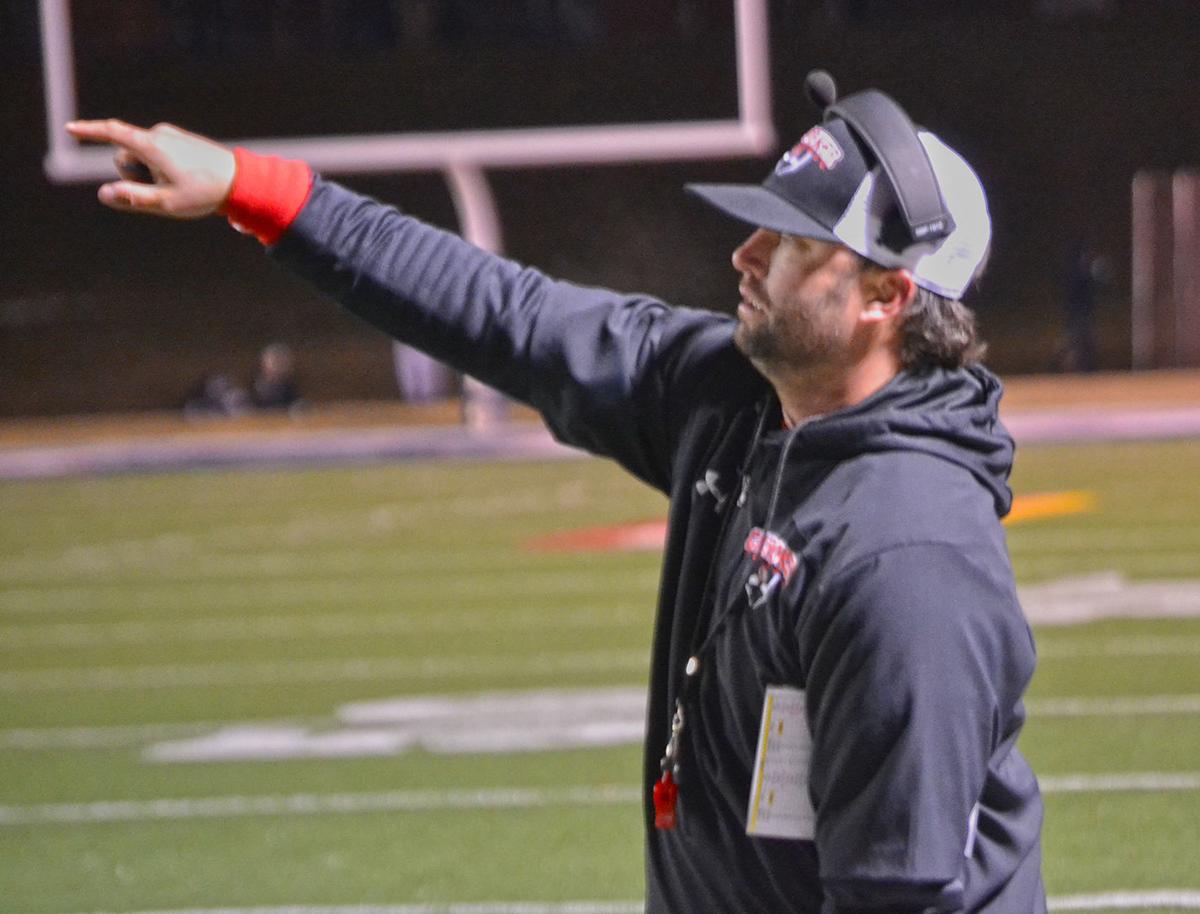 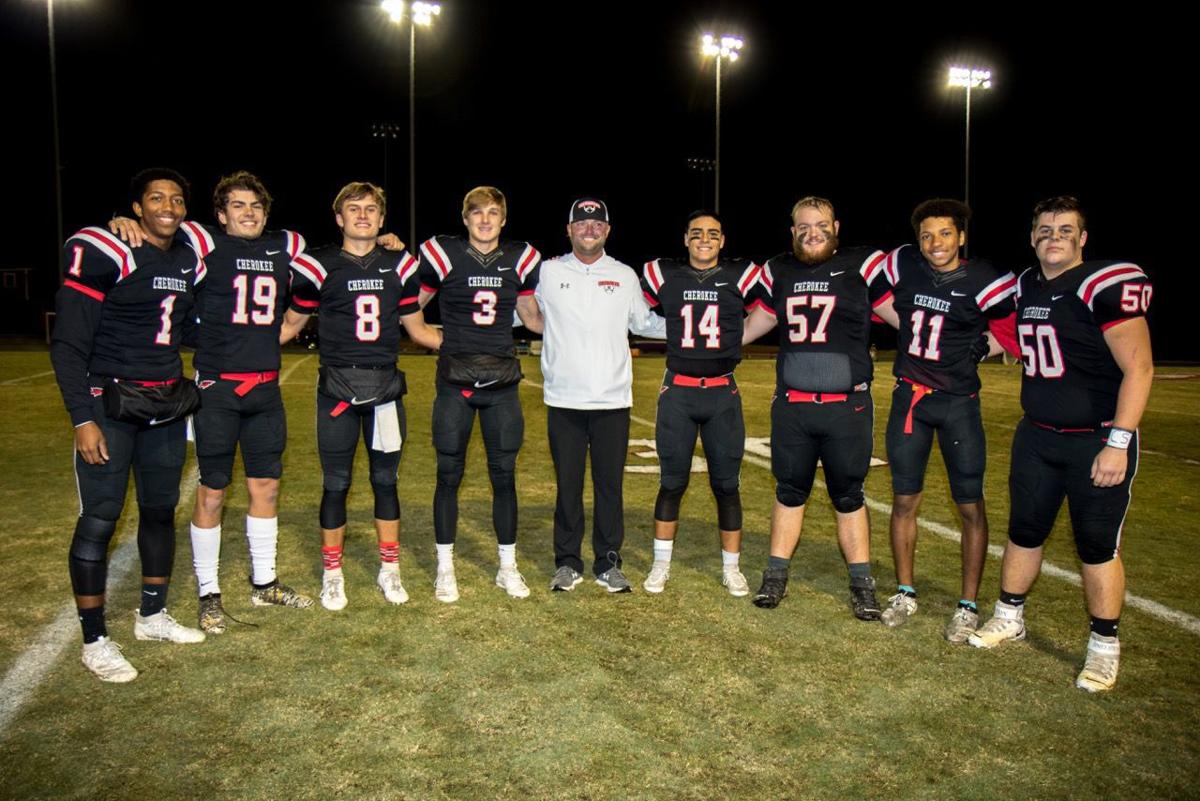 ROGERSVILLE – As Cody Baugh completes his fourth season at the helm of Cherokee football, he reflects on his first group of freshmen and looks ahead to his returning team.

“We had eight seniors that finished the season. We had five that went through the program all four years, really my first true class of young men,” Baugh said. “That group is always going to be special to me.”

Trent and Leeper will get attention from some small colleges, Baugh said.

“There’s some interest,” Baugh said. “Collin and Jonas are two who are receiving the most attention right now. It’s all smaller schools. I keep telling them they’ve got to be patient because this time of year is not really for smaller schools.

“It’s not really heated up that much. They don’t have the staffs to recruit during the season like the bigger schools do. So it’s just a matter of time. There are some NAIA schools that are very interested. They’re different than Division 3 schools. They have a lot more money to give,” Baugh said, adding an important point.

“Those guys have to understand it’s more about getting school paid for than anything,” Baugh said.

The loss of seniors will create a big void.

“It’s a serious hole to fill from those few,” Baugh said. “I look at Collin and Jonas, even Micah. Micah wasn’t the most productive all four years but he was definitely a role player who played in a whole lot of football games.

Cherokee had two players named Micah Jones: No. 19, the senior receiver and No. 12, a sophomore quarterback.

“(For) the majority of our JV season, Micah Jones, No. 12, was our quarterback,” Baugh said. “Actually every game he played in on JV, we won. He got hurt there for a few weeks. He hurt his ankle and was out. The only two games we lost was when he was out.

“We’ve got to figure out what helps our team win the most. Micah Jones has the strongest arm of the group and gained a lot of experience this year. We went 7-2 in JV and lost the two games we lost were by less than a touchdown – to Elizabethton and Greeneville,” Baugh said.

“He’s a sophomore. He didn’t play as a freshman. He played for Bulls Gap in eighth grade, so he’s really only played two years of football and he’s done really well. He’s a competitor and a leader. He’s a winner. He’s not going to say a whole lot, but the guys are really competitive out on the field.

“Hopefully he’ll be ready to step into that role and other guys will compete and we’ll see what happens. You can’t always count on a freshman to do it, but I feel like we’ve got a pretty decent eighth-grade class coming. Pretty good size and there’s pieces from each school coming that should be able to help us,” said Baugh of Cherokee’s infusion of youngsters.

“You look at our roster and we have eight seniors and we only had nine juniors. We had 70 kids. That means we had a lot of freshmen and sophomores. It’s another big class of those guys, so the future looks good,” Baugh said.

“We used pretty much all freshmen offensive linemen. You look at our varsity offensive line and it was all sophomores, besides Tyler Susong,” Baugh said.

“One who stands out to me that I know can be one to deal with is Aaron Stewart. Aaron, as a freshman, was one of the strongest guys on our team, as far as weight room goes, and is very athletic to go with it. He’s one to keep an eye on,” Baugh said, pointing out some other players to watch.

“Brayden Collins played sparingly here in JV games. Matt Newton was a big key. Both those guys were big down the stretch. Parker Bailey had a great JV season,” he said.

“Justin Hamblen, this was his first year playing football for us. He was a junior, but being a first-year guy, he played a lot of JV and had a lot of success at receiver, being around his brother, Austin,” said Baugh. “Austin figured out that working hard will make you more successful. It definitely panned out for him.”

There’s reason for optimism on the other side of the ball, also.

“Our defense on JV played really well. They held a lot of teams to low scores, forced a lot of turnovers and did a lot of things you want to do,” Baugh said, naming some other players who will likely move into more prominent roles.

“Thomas Hughes has been kind of in the shadows with Trent Price, and Trent Price will still be carrying a lot of the load, running back-wise,” Baugh said. “But Thomas was one who continued to get better and better and was pretty dangerous with the ball in his hands.”

A good-sized freshman who was dangerous with the ball in his hands at Bulls Gap is another one ready to transition to varsity.

“Matt Lewis, once he got used to high school – not just the football part, but all of it – he started being productive,” Baugh said. “He started a lot of games late and filled in a lot on the varsity, especially on defense, and did a lot of things good.

“In JV, when we needed a tough yard or two, we put him in at running back, and many times he’d get it. He was a load to try to tackle. I think the last JV game at Tennessee High, we were down 16-0 and he had a few really tough runs,” said Baugh.

“After that, we came back to win. That’s one thing about that group of kids. The energy and effort was always very good. They were definitely a team. They stuck together. It didn’t matter who was out there. It was fun to watch,” said Baugh.

A track star at Rogersville Middle School came out for Cherokee football this year and didn’t disappoint.

“Preston McNally didn’t play in eighth grade, but he showed up and played with us. He’s one who made a huge interception at Cocke County on varsity and made a lot of plays on JV,” Baugh said.

Get to know the Wisconsin Badgers' 2020 basketball scholarship recruits

“He has a different type of speed than most kids would have and one that can be a huge help for us moving forward if he’ll stick with it. He’s a dang good football player,” Baugh said.

“You have a lot of track guys who can run fast straight, but aren’t very good playing football. Preston was very instinctive. The future looks very bright for that young man if he sticks with it. He’s a receiver and safety,” said Baugh.

With the season completed, player report cards come next.

“They’ll have this week off,” Baugh said. “This week I’m going to take time to meet with each individual young man and kind of give them an outlook, share my thoughts on them moving forward, let them know where they stand as far as things go.

“We’ll always have kids who come out in spring practice. Hopefully, they’ll stick it out. Those are ones we don’t know about, those unknowns right now, who may or may not help us.

“It’s time to start talking about that stuff and find out who wants to play and who doesn’t. There’s always those kids who are going to be seniors who all of the sudden want to give it a shot. You want to shake them and say, ‘Why haven’t you been doing it to start with?’ At Cherokee, we have to take every athlete we can get and see what happens,” Baugh said.

Work in the weight room is pretty much year-round for football. The next thing on the football schedule is spring practice.

“The way the rule reads, we could technically do spring practice next week. But if you do it now, you can’t do it in spring,” Baugh said.

“You get 15 days and then 10 practices whenever you start them. You have to do it when school’s in session. There are some teams that like to do it February at the end of basketball and before baseball kicks up, so they’ll have all their kids.

“But then if you’re planning on scrimmaging somebody, that’s kind of taken away. We’ve got to sit down as a staff and figure out what’s best for us, because we’ve got three guys that coach baseball. We have to see how the schedules match up,” he said.

“We’ll probably end up doing spring practice toward the end of school like we always do,” Baugh said.

Of course, springtime also brings graduation at the end of May.

That’s when Baugh will say goodbye to his first group of freshmen, including Trent, whose off-field presence stands out as much as his talent does between the lines.

“It’s sad to see him go, but I don’t worry about him being successful moving forward in life,” Baugh said. “He understands things. So many people, it takes a while to figure life out. But I think he’s definitely mature for his age as far as that goes.”