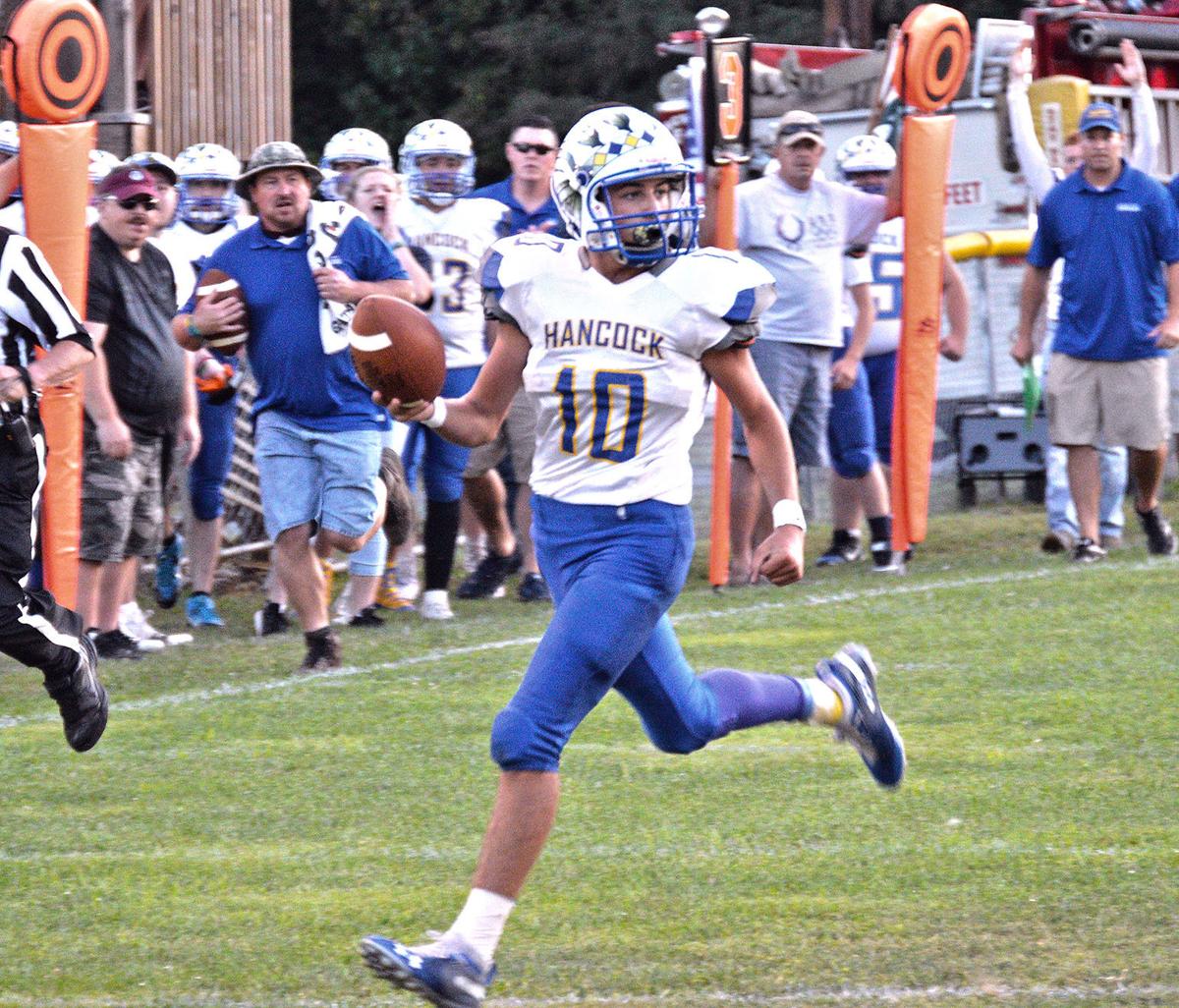 Devon Blevins coasts into the end zone with a touchdown. 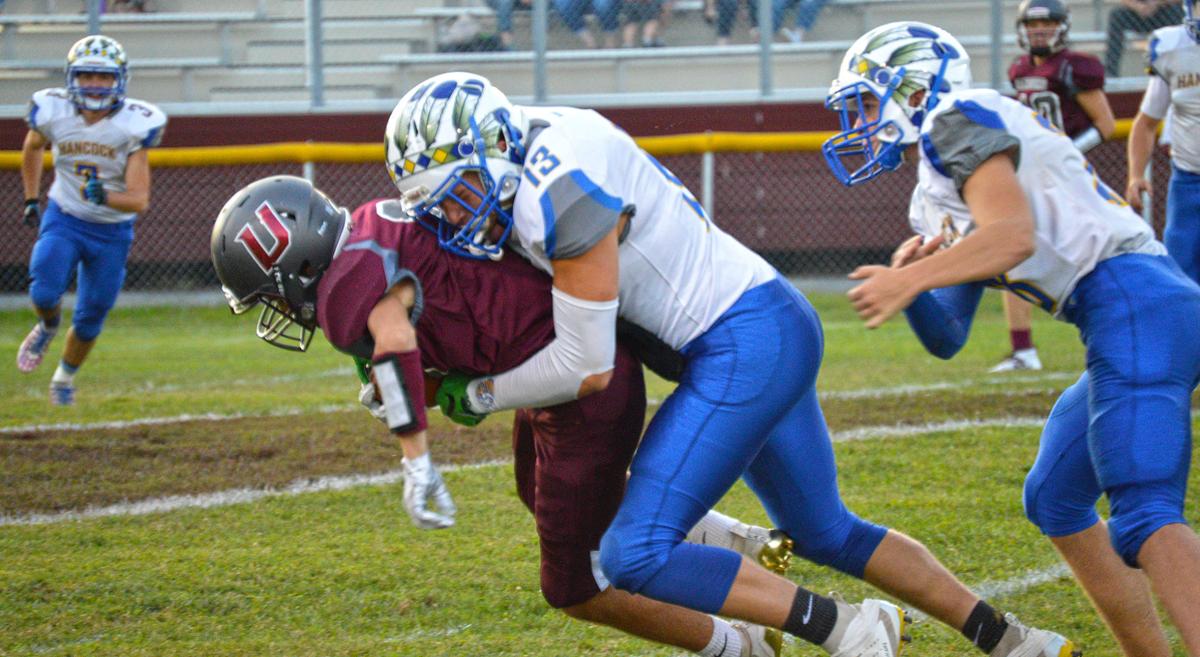 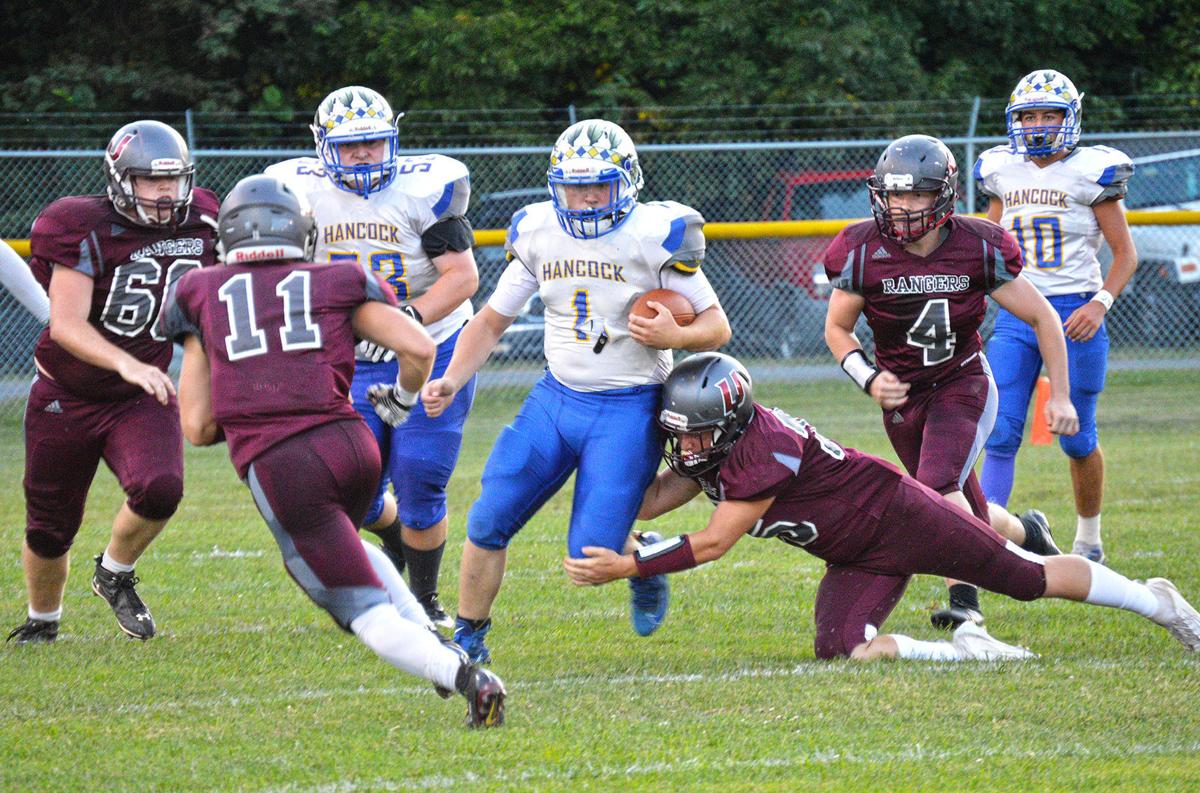 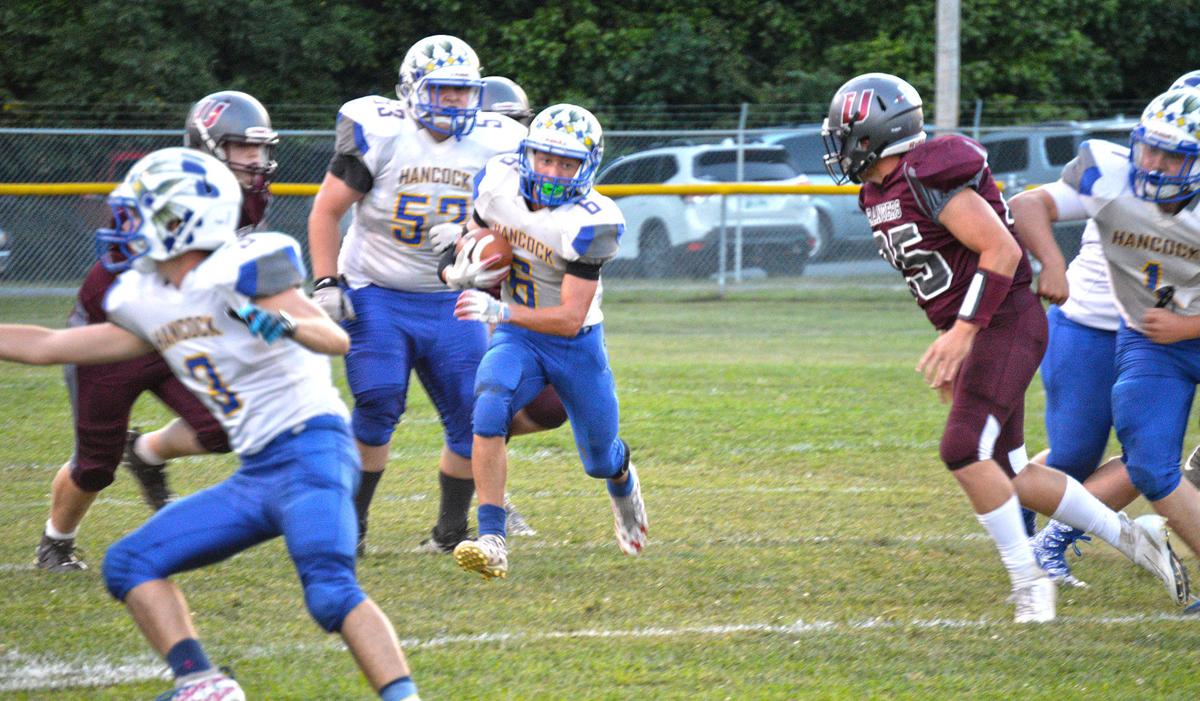 Hancock County’s Darran Collins (6) takes advantage of the hole opened up by the Indians offensive line. 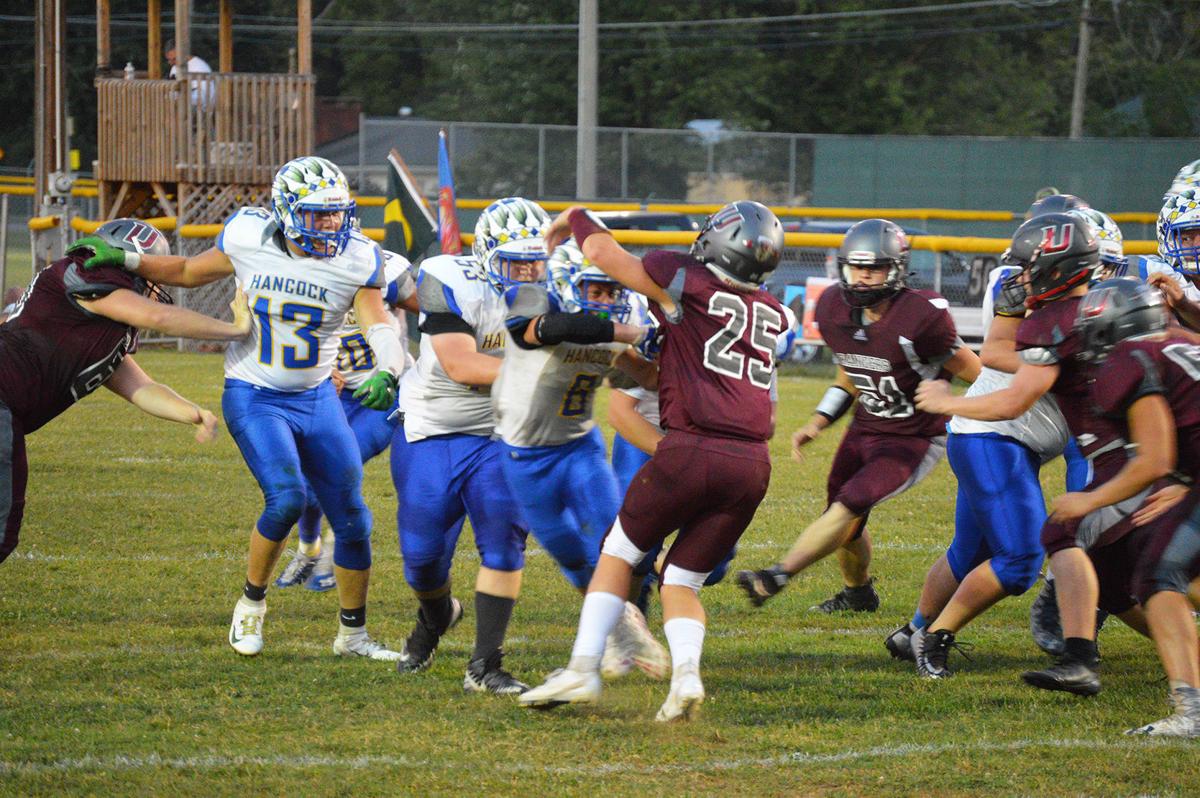 Hancock County blockers clear the path for a run. 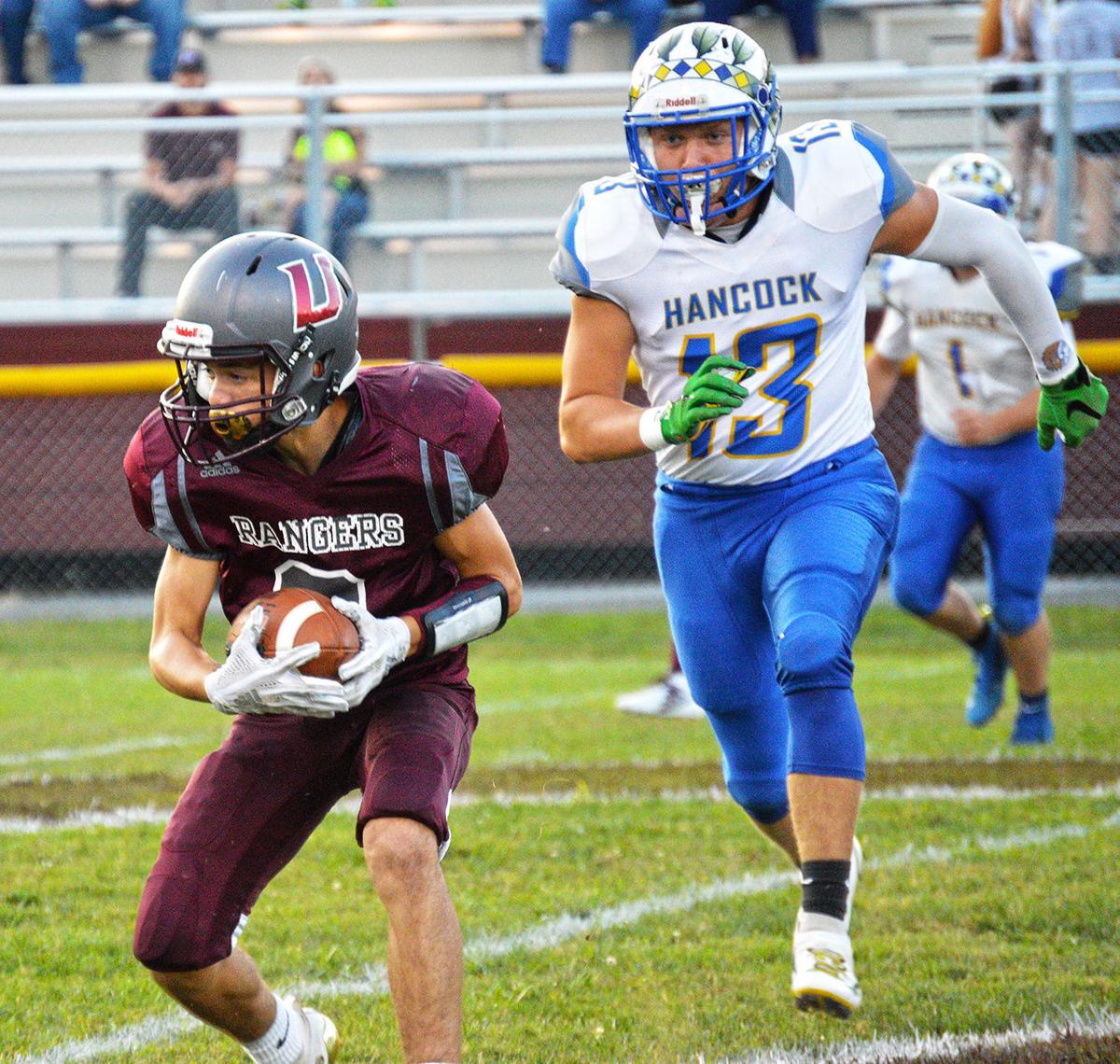 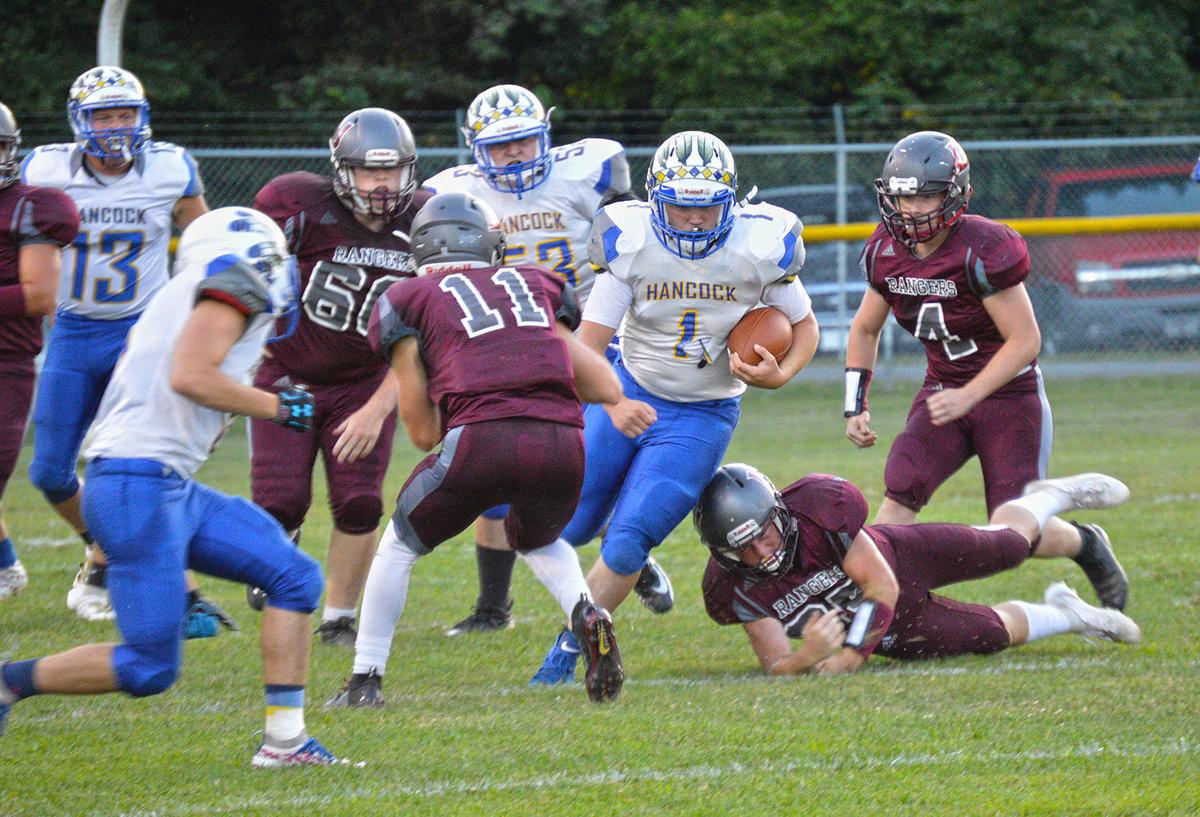 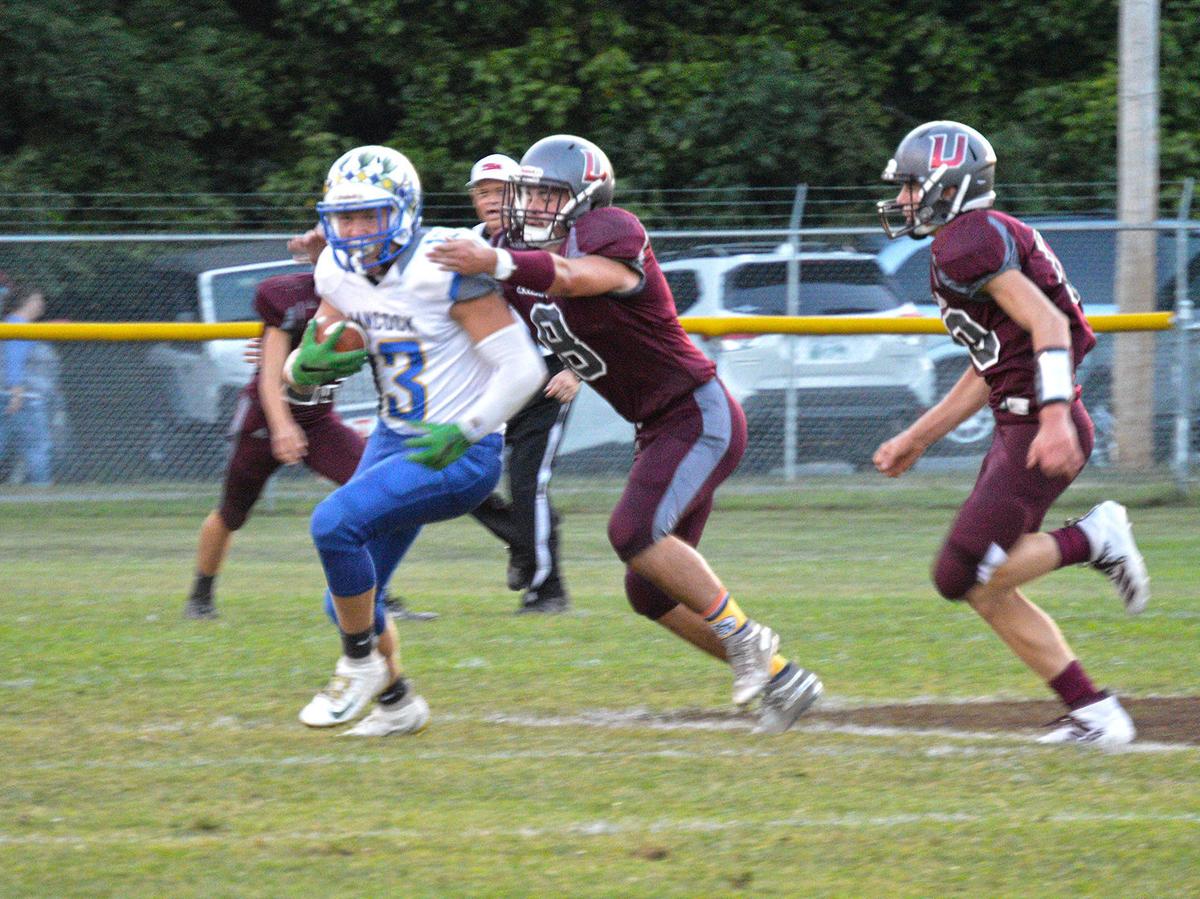 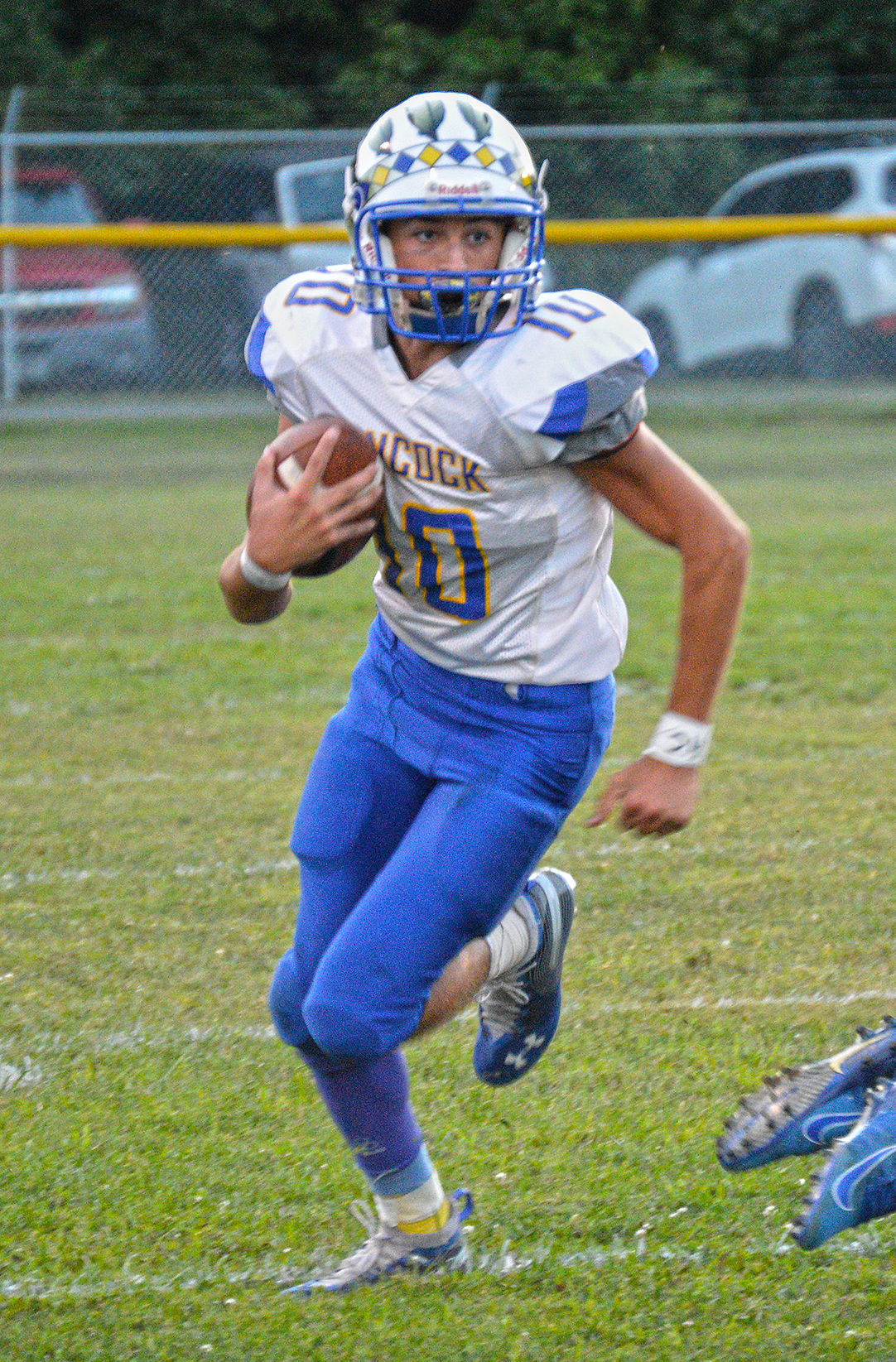 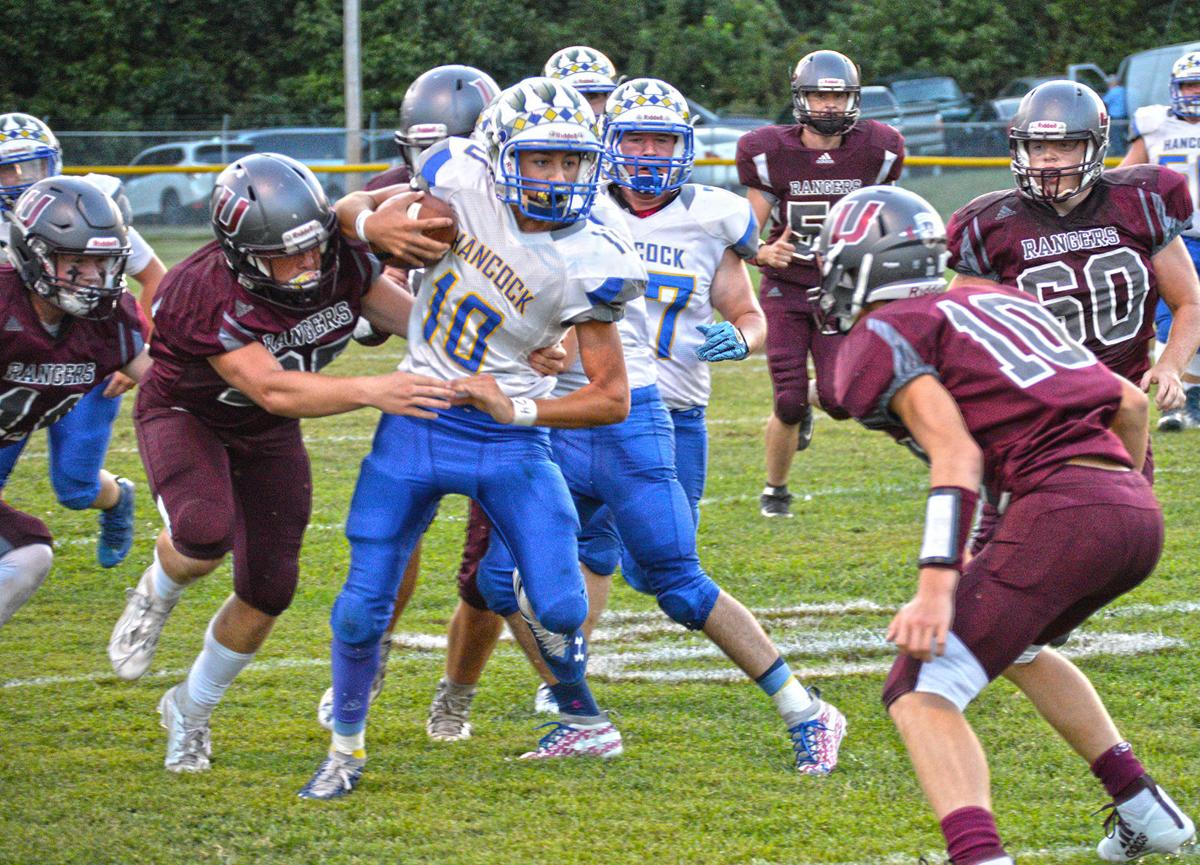 Devon Blevins coasts into the end zone with a touchdown.

Hancock County’s Darran Collins (6) takes advantage of the hole opened up by the Indians offensive line.

Hancock County blockers clear the path for a run.

STONEY CREEK – For the second time in three games the Hancock County Indians played on overtime game Friday night on the road. When the dust settled the Indians came away with a 50-48 win over the Unaka High School Rangers.

The exciting game had lots of twists and turns.

The Indians relied on their running game for much of this game, led by quarterback Devon Blevins with Jadon Royston, Ethan Short, and Darran Collins all helping to carry the load.

The Indians began the game with an onside kick which Unaka recovered. The defense held and forced a punt. A Blevins to Short pass put the ball in Ranger territory, and an 18-yard Blevins run set up a 27-yard touchdown scamper by Blevins. The point after attempt failed.

The Indians defense forced another three and out. Running at will the Indians moved into scoring position with an 11-yard Short carry. Blevins scored on a short run and the PAT was good, giving the Indians a 14-0 lead.

The Rangers found their own rushing attack on the next drive with Logan Benway finding the end zone to make it 14-6. Two possessions later Blevins hit Gabe Turner with a 48-yard touchdown to make it 22-6 at halftime.

The Rangers’ comeback started after halftime. The Indians received the ball but Unaka’s Devin Ramsey intercepted a Blevins pass and raced 43 yards to score, The conversion made it 22-14 Indians.

The Rangers’ defense held the Indians and they were forced to punt. A long touchdown pass and PAT made it 22-22. Blevins led the Indians right back down the field, as they covered 65 yards and Blevins carried in for the score, making the Hancock lead 28-22.

On the next drive, after converting a fourth down, Ramsey found Austin Drew for 45 yards and a touchdown, making it 28-all. Hancock gave up the lead when Daniel Shearl intercepted a pass and took it 68 yards to score. After the PAT, the Rangers led 36-28.

The Indians drove with Blevins carrying 4 times for 50 yards, setting up a Jadon Royston touchdown. Blevins ran in the PAT to tie the score at 36 all at the end of regulation.

Hot? Not? However you view Packers' Aaron Rodgers, he has Super Bowl in his sights

In the second overtime Ethan Short bulled his way into the end zone and then carried in the conversion, making the score 50-42 . Benway would not be denied for the Rangers, scoring on a tree yard run. On the conversion attempt senior Preston Hatfield busted through and the play ended with a fumble and a six yard loss.

Coach Blevins said ”Unaka did a great job executing their offense and taking advantage of our mistakes. When we were down 8 with seven minutes to go, I was pleased by my team’s response to adversity. They certainly showed a lot of heart and character to keep fighting and come back to win the game.”

The Indians play on the road again Friday at Rye Cove (Va.).