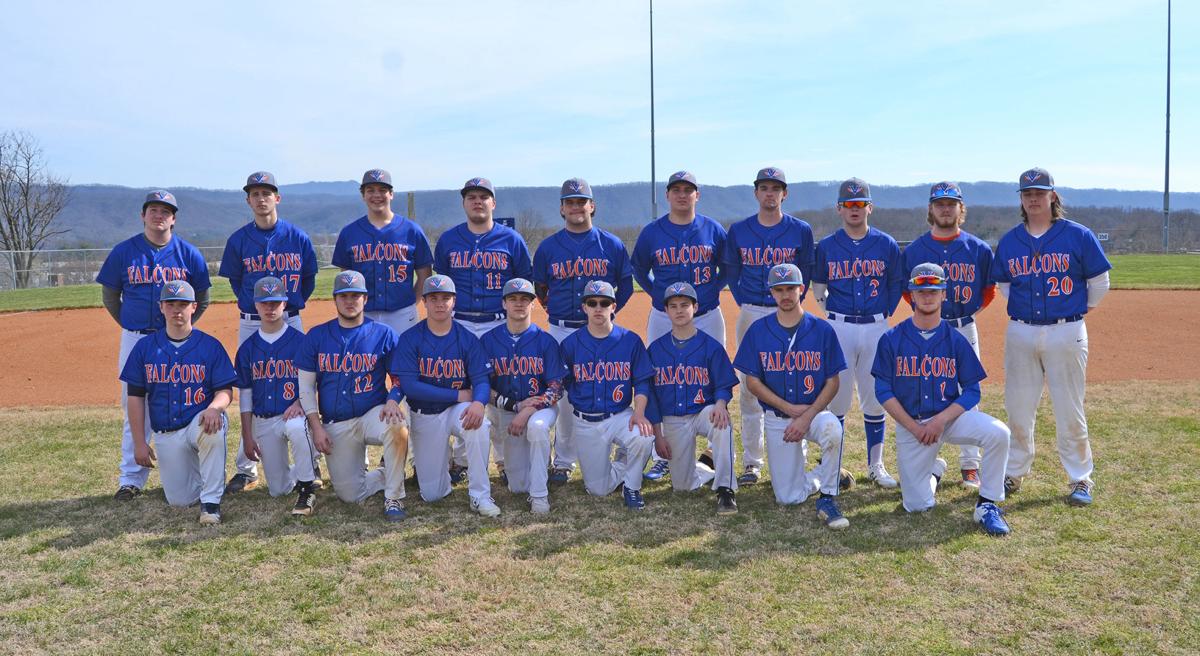 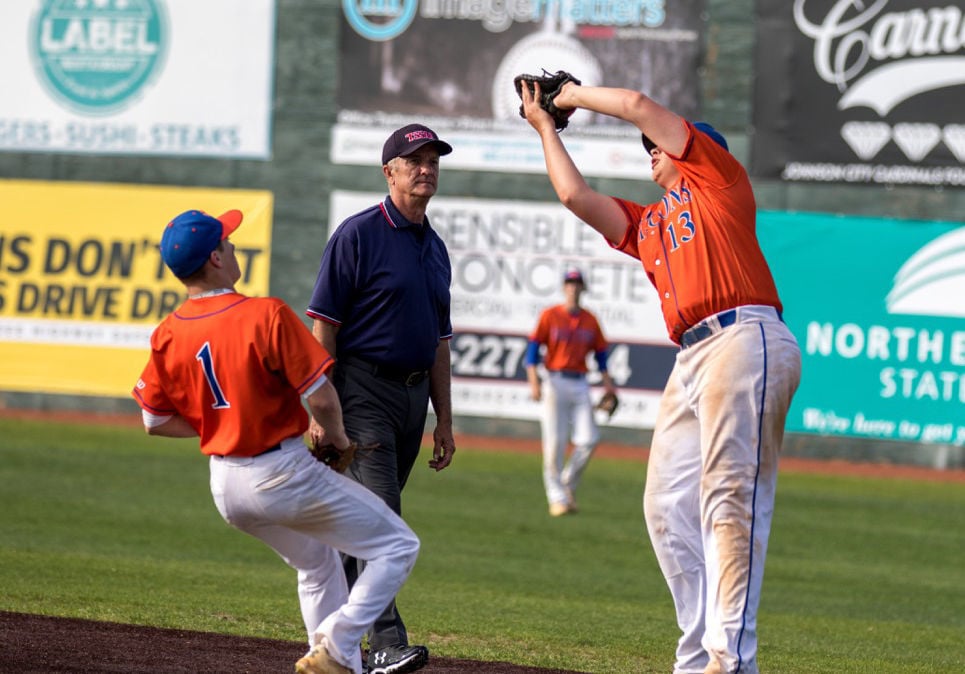 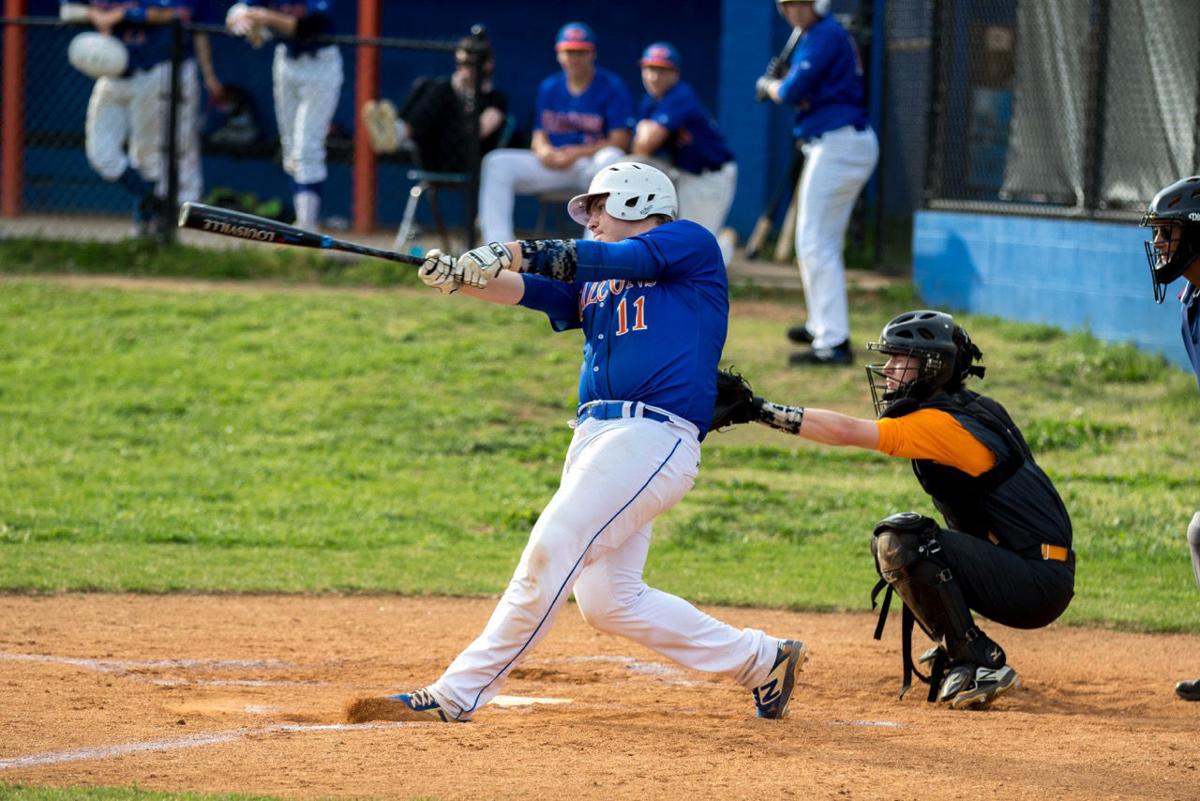 Volunteer’s Aaron Wills (11) connects on a pitch against Sullivan Central May 1 at Volunteer. 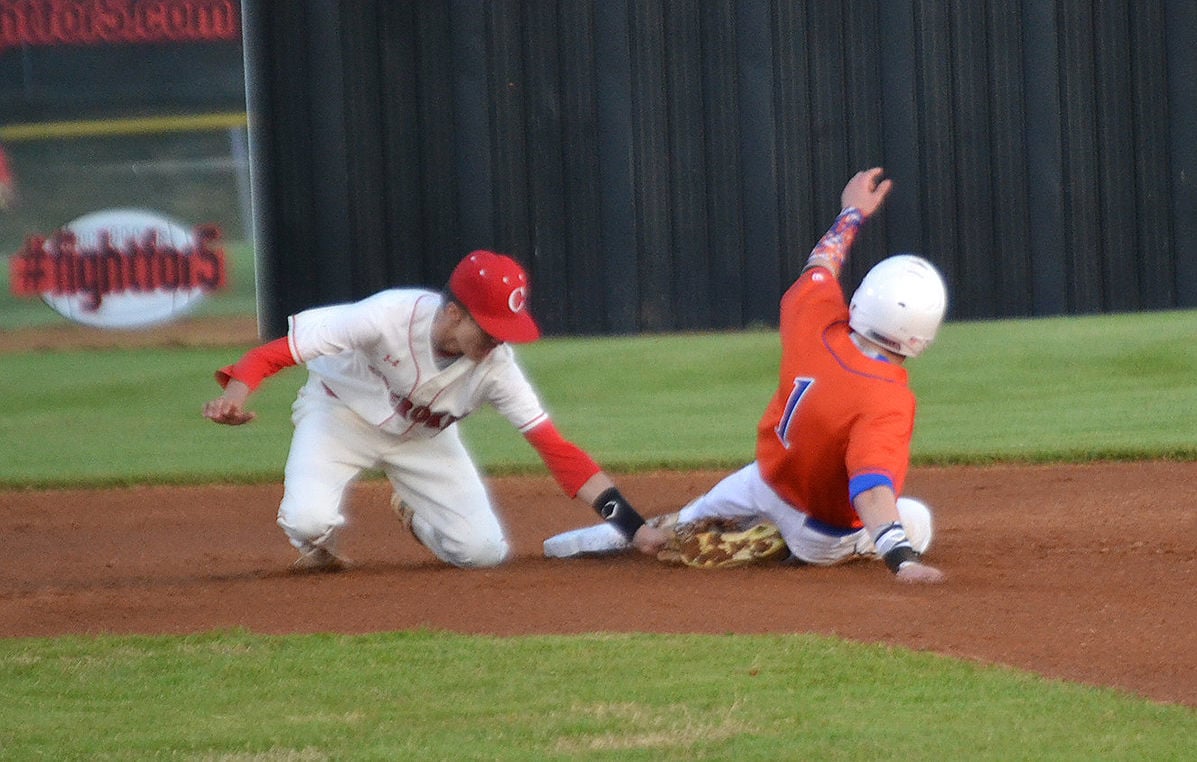 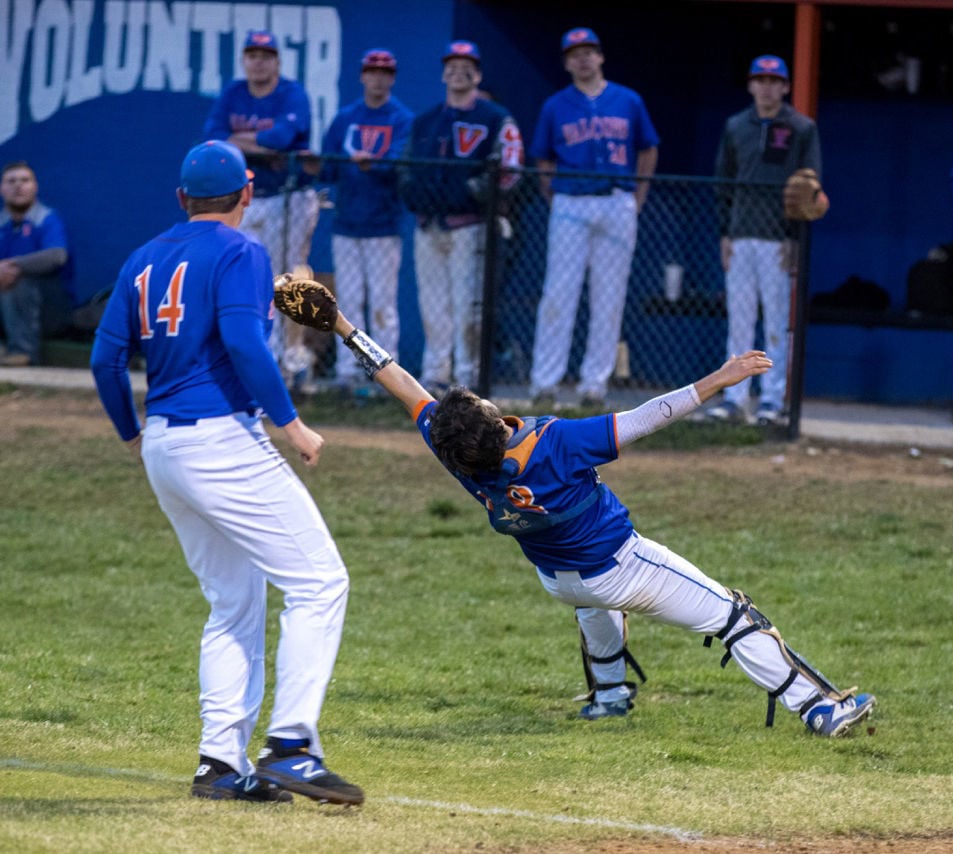 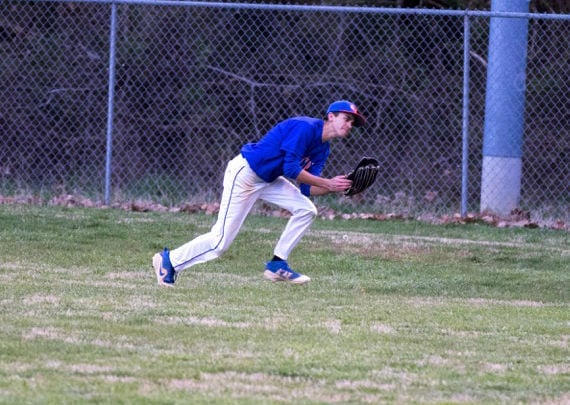 Rylan Greene runs down a fly against Cherokee April 1 last year at Volunteer. 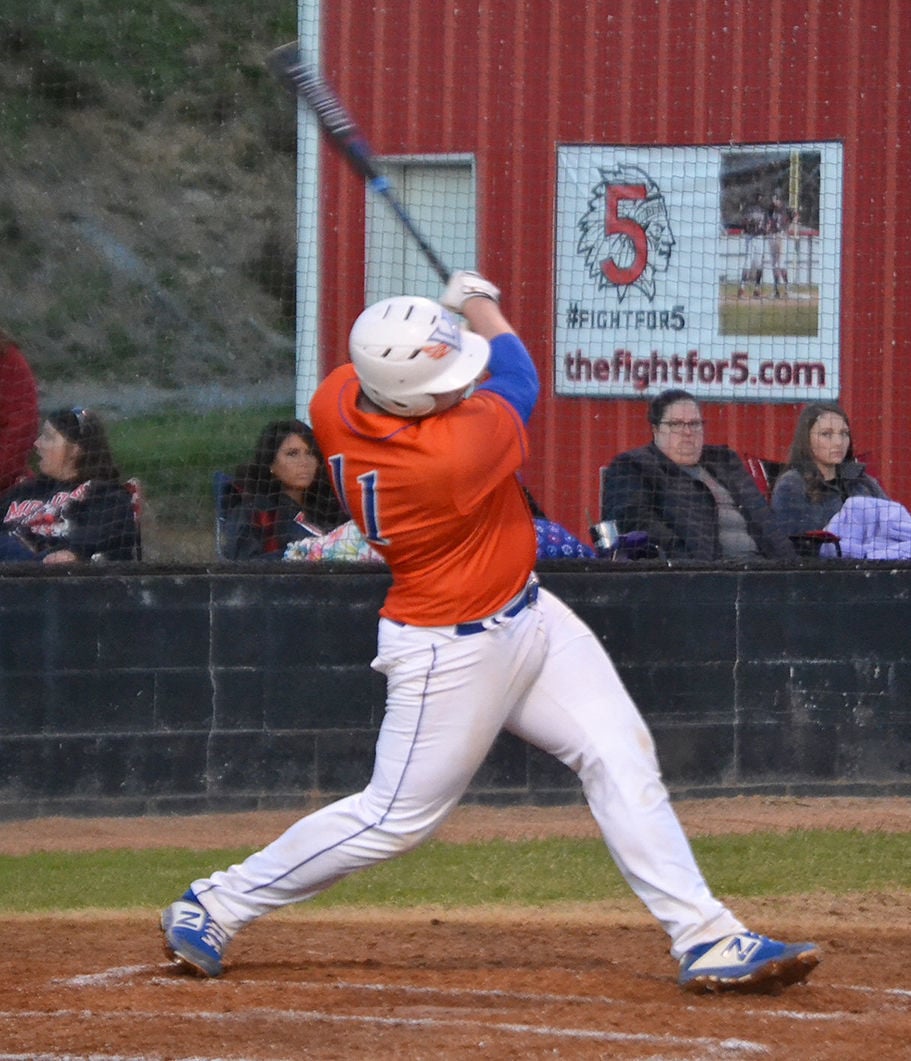 Aaron Wills was moved to third full-time in the Volunteer order.

Volunteer’s Aaron Wills (11) connects on a pitch against Sullivan Central May 1 at Volunteer.

Rylan Greene runs down a fly against Cherokee April 1 last year at Volunteer.

Aaron Wills was moved to third full-time in the Volunteer order.

While the Falcons, like all other sports teams, await word on the resumption of the coronavirus pandemic-interrupted season, we take a look at the make-up of the Church Hill squad.

“We return a bunch of kids from last year,” Castle said. “We’ve got eight seniors. All of them that return give us something that we didn’t have, a little bit of leadership.”

“We’ve got five sophomores who are pushing for playing time and some good pitching out of the sophomore bunch,” Castle said. “And we’ve got a couple of good freshmen.”

Colby Lawson, Zach Justice and Casen Christian are the Falcons freshmen who round out the team.

“Our number-one starter is Tucker Bellamy,” Castle said. “He’ll be coming back from last year. He pitched really well for us last year. He’s a junior.”

“Just go out there and throw,” Bellamy said. “That’s all you can do. Hope the guys behind you make the plays.”

Bellamy throws a fastball, curve ball and change-up. “I like my curve ball most of all,” Bellamy said, adding what the Falcons need to do to be successful.

“We need to swing the bat, hit the ball and make the plays. Just play baseball,” said Tucker, who likes the look of Volunteer’s 2020 club. “I think it’s looking the best it’s ever been,” he said.

The Falcons feature depth on the mound, Castle said.

“Ty Burnett, our starting right fielder, is our number two,” Castle said. “We’ve got about four or five that could be three or four. Garrison Barrett is a big, strong right-hander who’s just a sophomore. He’s getting up there with it.

“Ethan Smith, another sophomore, is a lefty who gives us a little different look. Then we got Peyton Derrick and another lefty in Rylan Green. We’ve got Jesse Rollins, who’s going to throw a little bit for us,” Castle said.

“We’ve got two freshmen that don’t have the velocity yet, but hit the zone a lot and keep us in the ball game: Zack Justice and Colby Lawson. Colby will be playing some outfield for us when Ty comes in to pitch. We’ve got about nine who can help us,” Castle said.

Experience abounds in the infield, as well.

NFL draft will be in ‘fully virtual format,’ leaving Packers GM Brian Gutekunst and staff to work from home

Columbia golf community reacts to absence of the Masters Tournament

“We’ll have two seniors in the infield and two juniors,” Castle said. “Caleb Trent will play first. Landon Carver will start at second. With Tucker on the mound, Zach (Justice), our freshman, will play shortstop.

“Brody Cloud will start at third. We’ll have Aaron Wills and Quinn Brooks behind the plate. They’re both pretty good hitters, so one will DH when the other one catches,” Castle said, rounding out the infield.

Castle has all seniors in the outfield.

“We’ll have Peyton Derrick in left, Rylan Greene in center and Ty Burnett in right,” he said.

The lineup starts with the speedy Derrick, who still may sign with a college football program.

“Peyton is probably going to lead off for us, get a little excitement going,” Castle said. “Peyton has got a little speed. He gets us started.

“Ty will probably bat second. He’s good for getting the ball in play and getting some people moving. He puts the bat on the ball where we can do some hit and run stuff to get him going,” Castle said.

The Falcons have some fire power in the middle of the order.

“Big Aaron will bat third,” Castle said. “A couple of times last year we bat him in the fourth spot. We finally just went ahead and put him third to get him to the plate one more time quicker.

“CT (Caleb Trent) our first baseman, who was all-conference last year at first base, will be batting fourth. He wound up hitting .457 last year,” Castle said.

“Probably Rylan will bat fifth,” Castle said of the versatile centerfielder. Brooks’ power will be worked in the lineup somewhere.

“Then we’ll come back in with Landon, Brody and Tucker,” Castle said. “We feel like we’ve got a pretty good lineup.”

“As a team, we didn’t really do too well last year, but we’re starting to pick up. It should be one of our best years. We need to stay positive. If the other team puts up four or five runs in the first inning, we need to stay with it and not get our heads down. We need to play as a team,” he said.

“We’ve worked pretty hard for the little time we’ve had on the field,” Brooks said, right before the season was put on hold.

“We had a couple of good months together,” Castle added. “Not being able to get out a whole lot, but when we did, we got to do a lot of things. We were able to take a lot of batting practice and work on our bunt coverages and cut-offs and stuff. We’re going to find out.”

Castle’s outlook for the season remains the same with the delay.

“I think the biggest thing we’re trying to get changed is that attitude,” Castle said. “We’ve got to win some. That’s where we are right now. We’ve got a really good nucleus right now and their attitude has been pretty good. We’ll see what happens.”