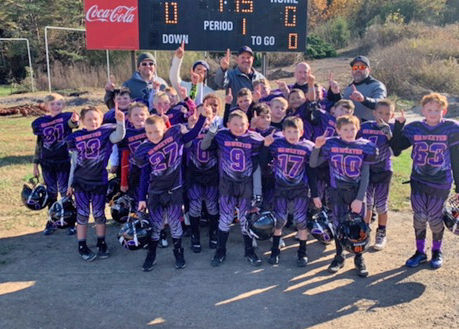 The Hawkeyes beat John Battle, 40-6, last week in Hancock County to earn a berth in the championship. 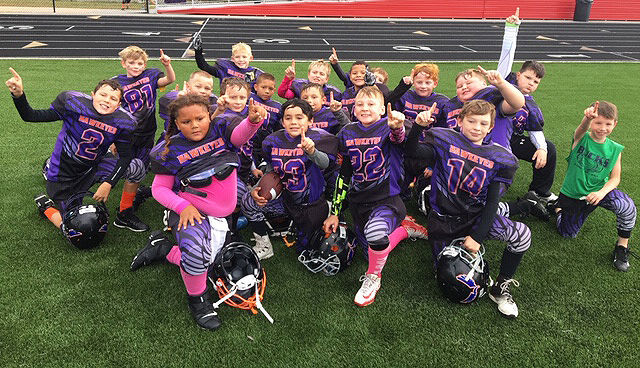 The Hawkins County Hawkeyes are 9-0 heading into the title game, having outscored their opponents, 300-30, this season.

The Hawkeyes beat John Battle, 40-6, last week in Hancock County to earn a berth in the championship.

The Hawkins County Hawkeyes are 9-0 heading into the title game, having outscored their opponents, 300-30, this season.

SURGOINSVILLE – In their inaugural season, the Hawkins County Hawkeyes are playing for the Tri-Cities Youth Football League championship Saturday at Wise Central in Norton, Va.

A travel ball football program represented by all far reaches of Hawkins County, the 7- and 8-year-old Hawkeyes head into the title game against the Lynn Garden Lynx with a 9-0 record, having outscored their opponents this year, 300-30.

“It’s comprised of kids from everywhere – Kingsport, Church Hill, Mooresburg, Bulls Gap, Rogersville,” Hawkeyes coach Kevin Grigsby said during a practice at Surgoinsville Middle School Tuesday night. “We have 22 players. This is our conference championship. Both teams are undefeated.”

The Hawkeyes advanced to the TCYFL championship by beating John Battle, 40-6, at a playoff game in Hancock County.

Grigsby is assisted by coach Jason Putnall and an assortment of parents.

“We started and combined the entire county, from Mount Carmel and even the Kingsport portion of Hawkins County, all the way to the other side,” said Erika Qualls, Hawkeyes President.

After the championship, the Hawkeyes will take an 11 & Under and 8 & Under team to the Eighth Annual Big Blue Bash Football Tournament Nov. 16-17 in Richlands, Va.

Then all members of the Hawkeyes will travel to the University of Tennessee on Nov. 30 for Youth Sports Day.

“They get to meet Phil Fulmer, tour the practice facility and do all sorts of cool stuff there,” Qualls said. “And then they get to watch the Vanderbilt game.

“That’s kind of end-of-the-year (celebration) instead of a banquet and a trophy. We wanted to do something that would stay with them forever,” said Qualls, adding the inaugural season has been a huge success.

“It’s been amazing,” she said. “We have been to some really neat places. We’ve done really well. None of our teams were at the bottom out of 14 teams in this league. We are in the middle or at the top with every age group.”

The TCYFL is made up of teams in Northeast Tennessee and Southwest Virginia.

Some of the teams formed due to smaller communities no longer being able to field parks and recreation leagues due to decreased participation.

“A lot of people are kind of swaying from the regular rec league football to the travel football because it kind of gets your kids out of playing each other and actually playing people they’ll play in middle school and high school,” Qualls said.

“We wanted to bring everyone together because we felt football was too spread out across the county, so we really couldn’t be a force to be reckoned with. We have the talent to stand up and compete with the other places, but we were too spread out and doing our own thing,” Qualls said.

“So, we kind of thought if we brought everybody together, we could build fundamental football and actually make a name for Hawkins County,” she said.

“They build a bond with their brother and they’re not beating up on each other. They’re actually playing against other people. I think it helps build a bond rather than a rivalry with one another and they can go from there,” Qualls said.

“That was our ultimate goal, to bring everybody together and save the rivalry for high school,” she said. “The way that this league and our organization is run, you just go there to your age group and you battle and fight for a starting position every week. Who signs up is who comes and that’s who’s on that age group. It’s not a pick-and-choose. We took everyone who signed up.”