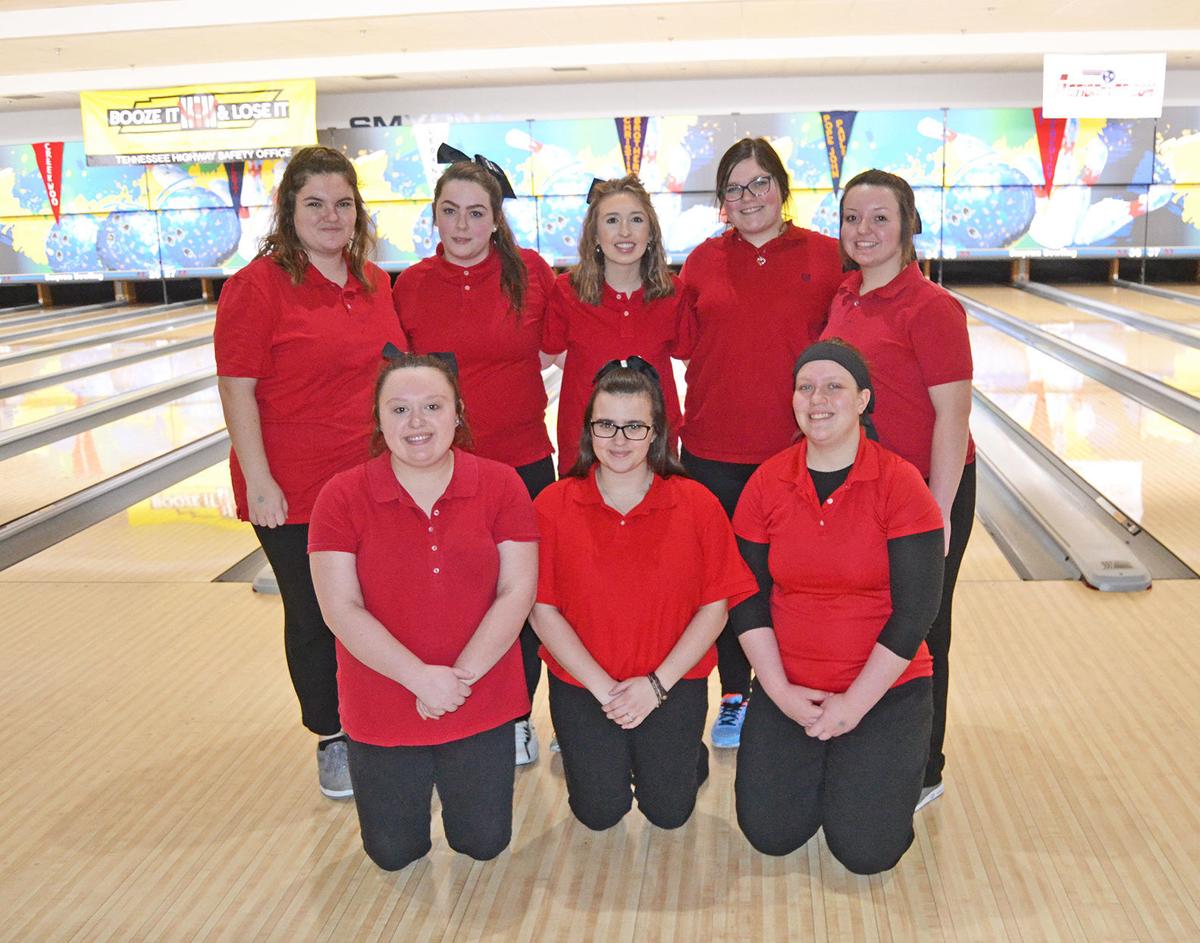 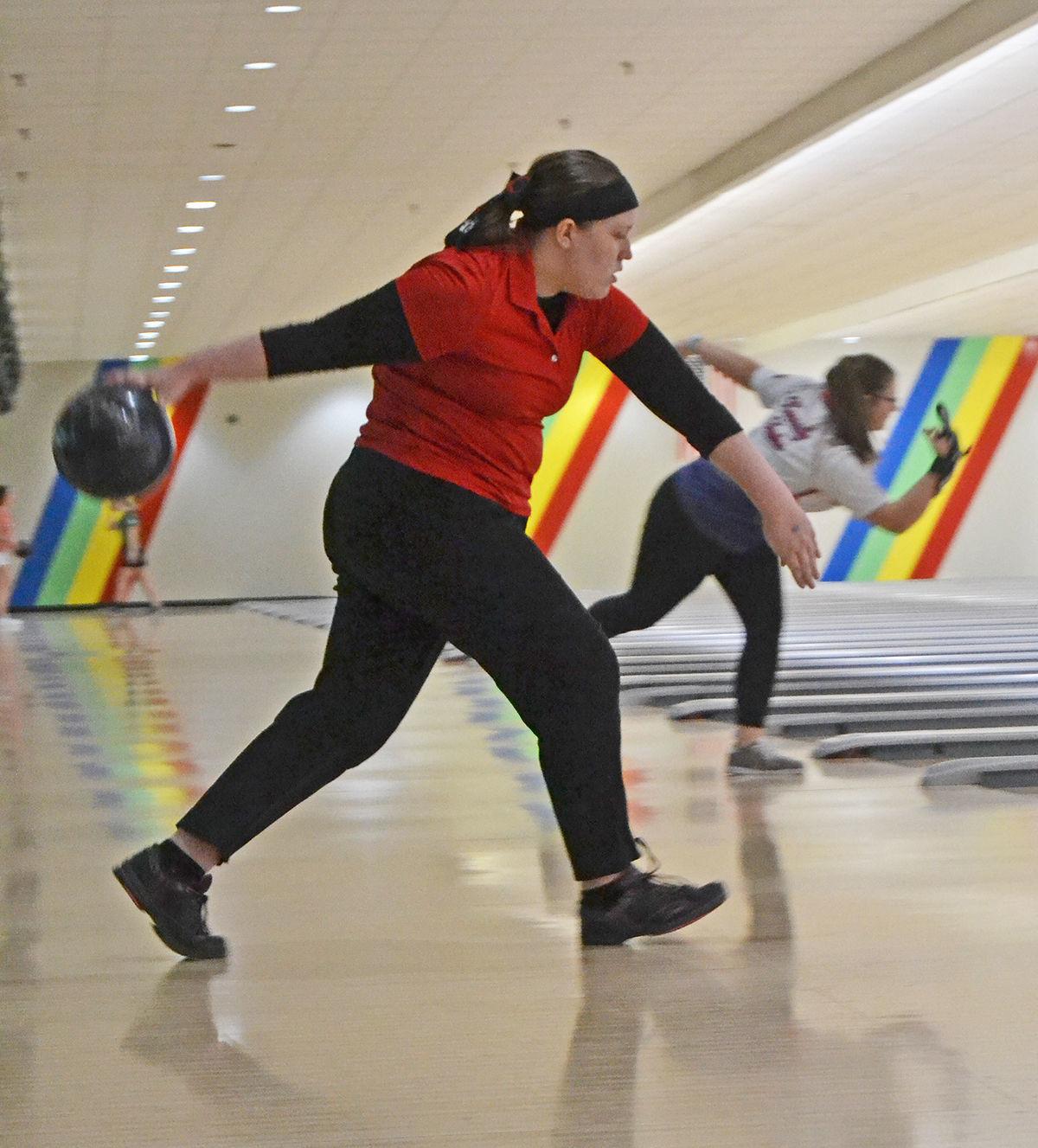 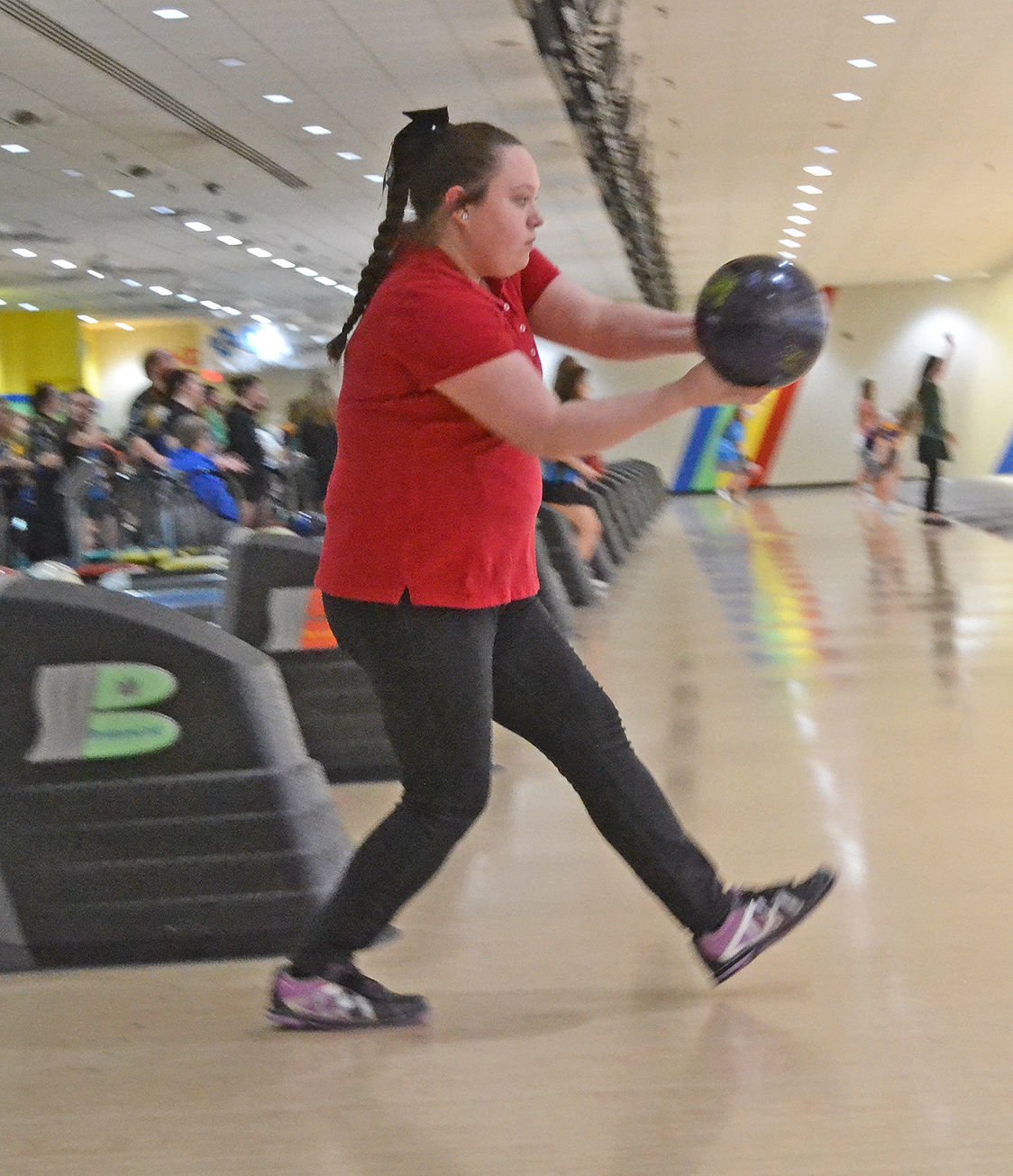 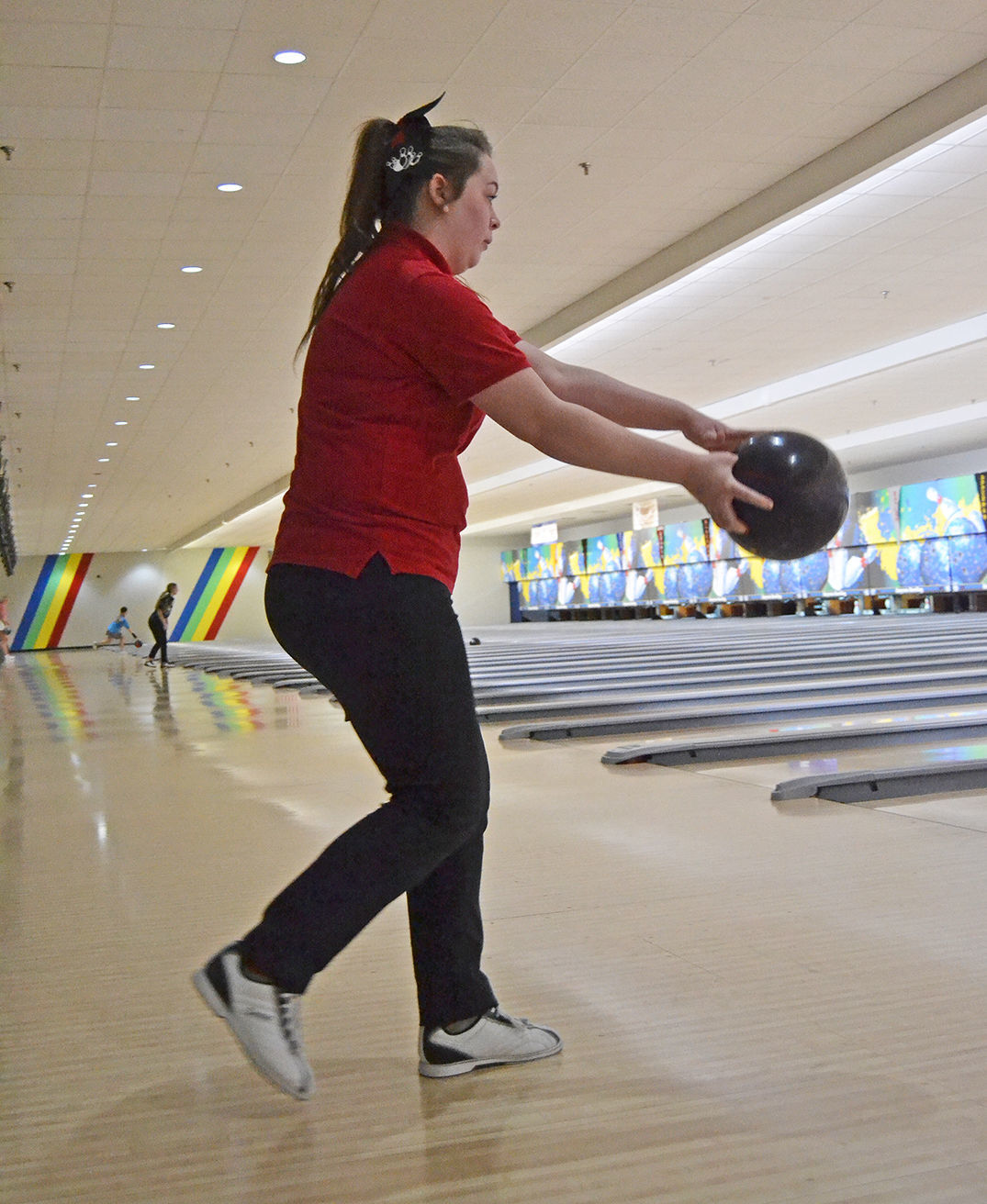 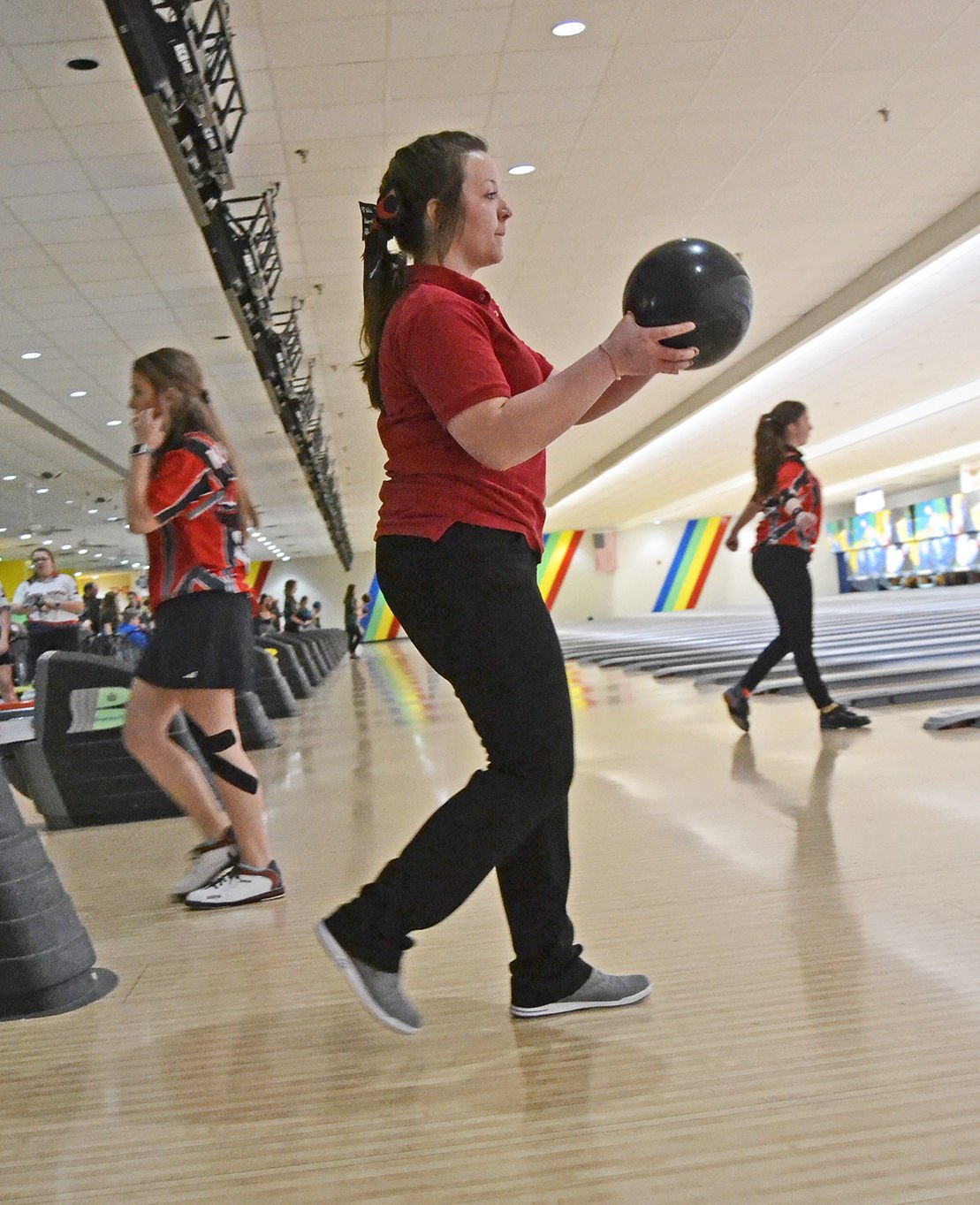 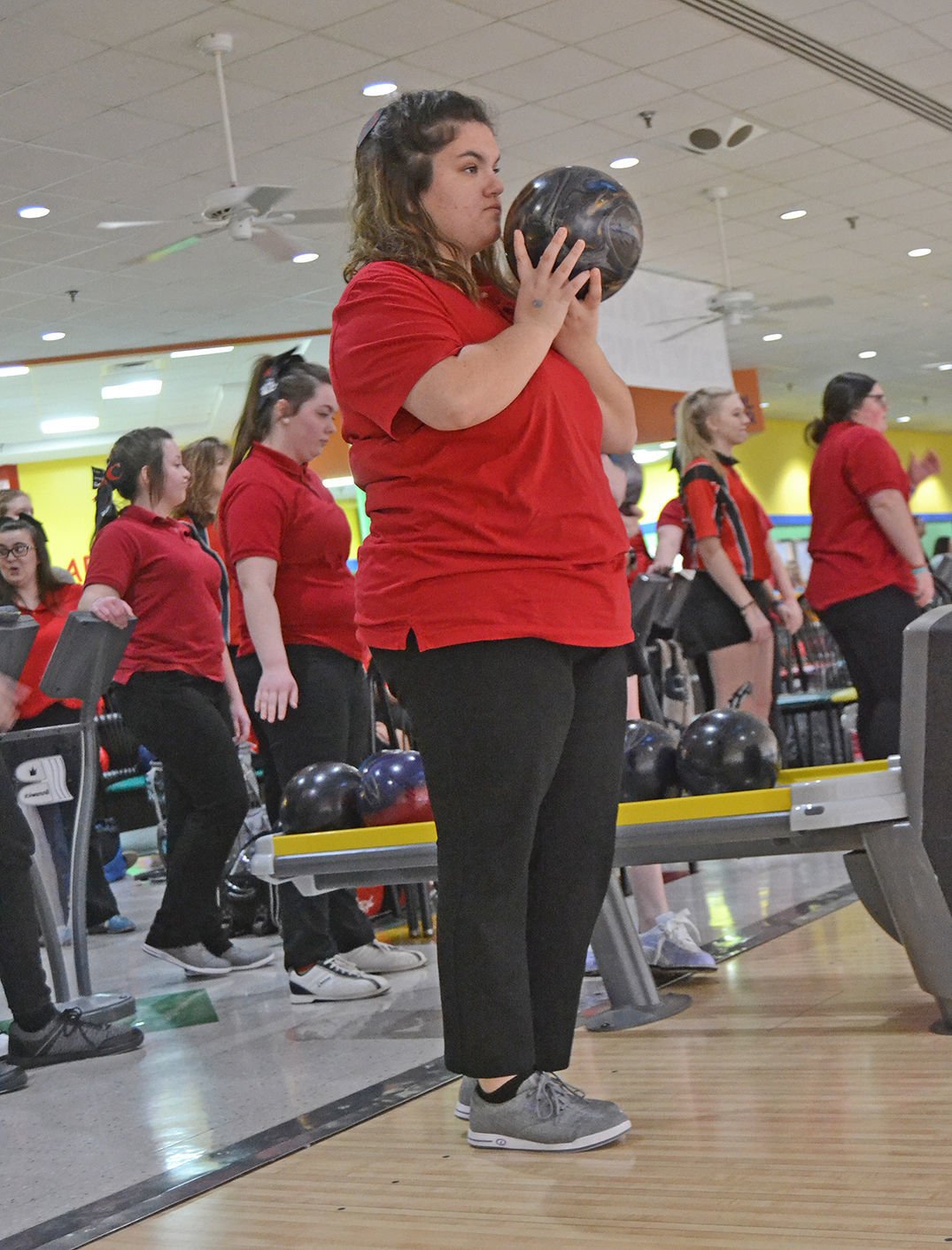 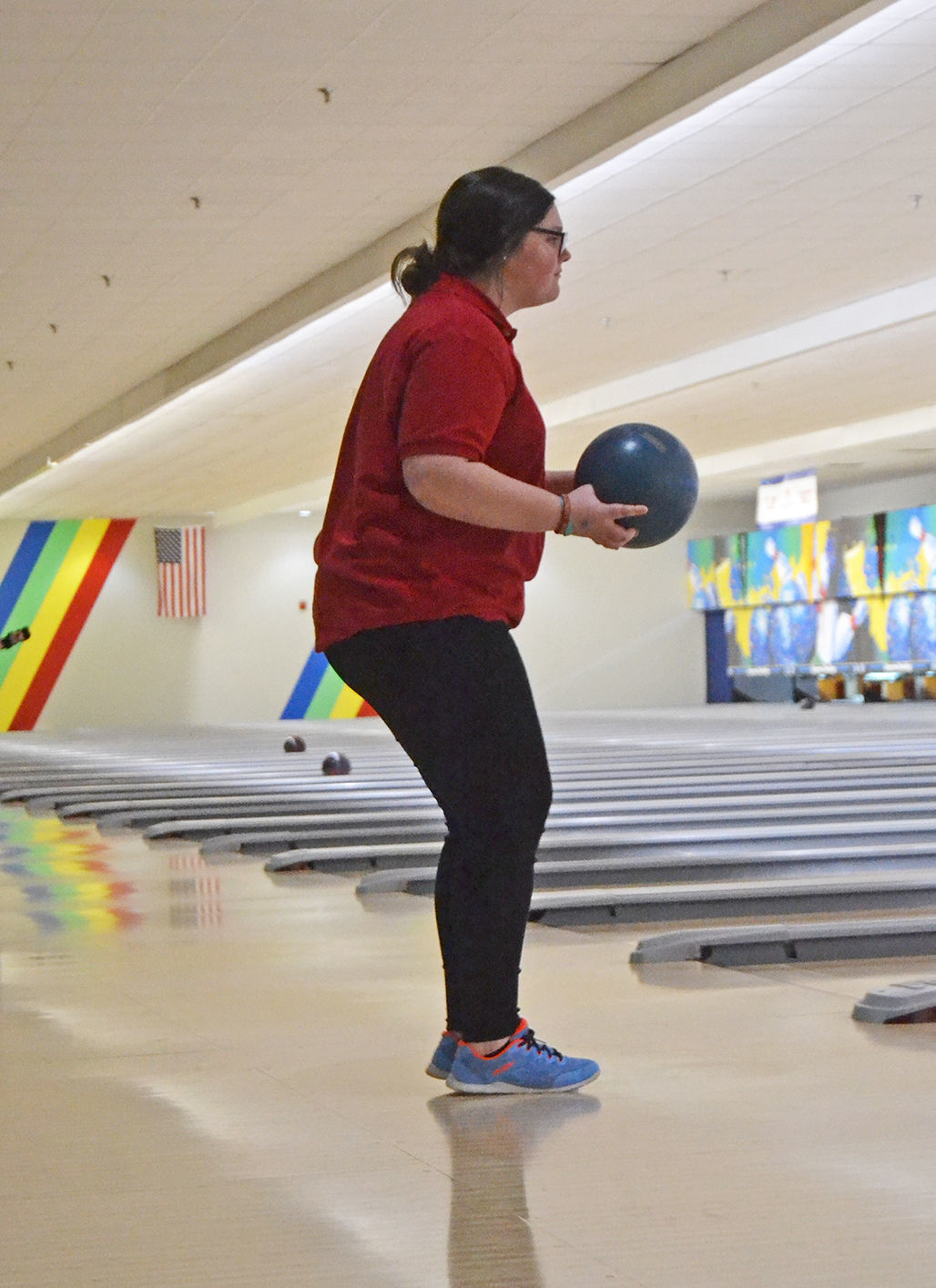 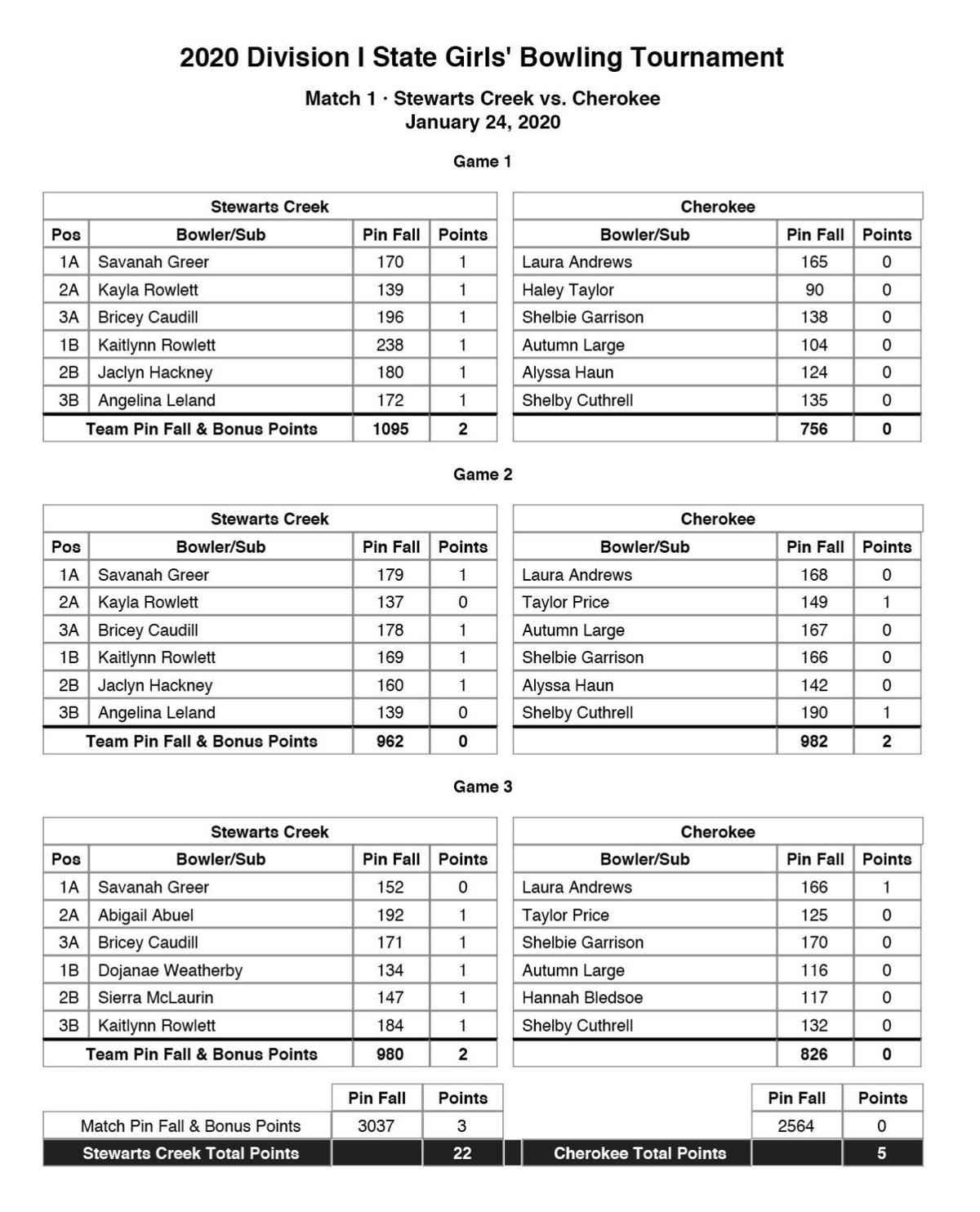 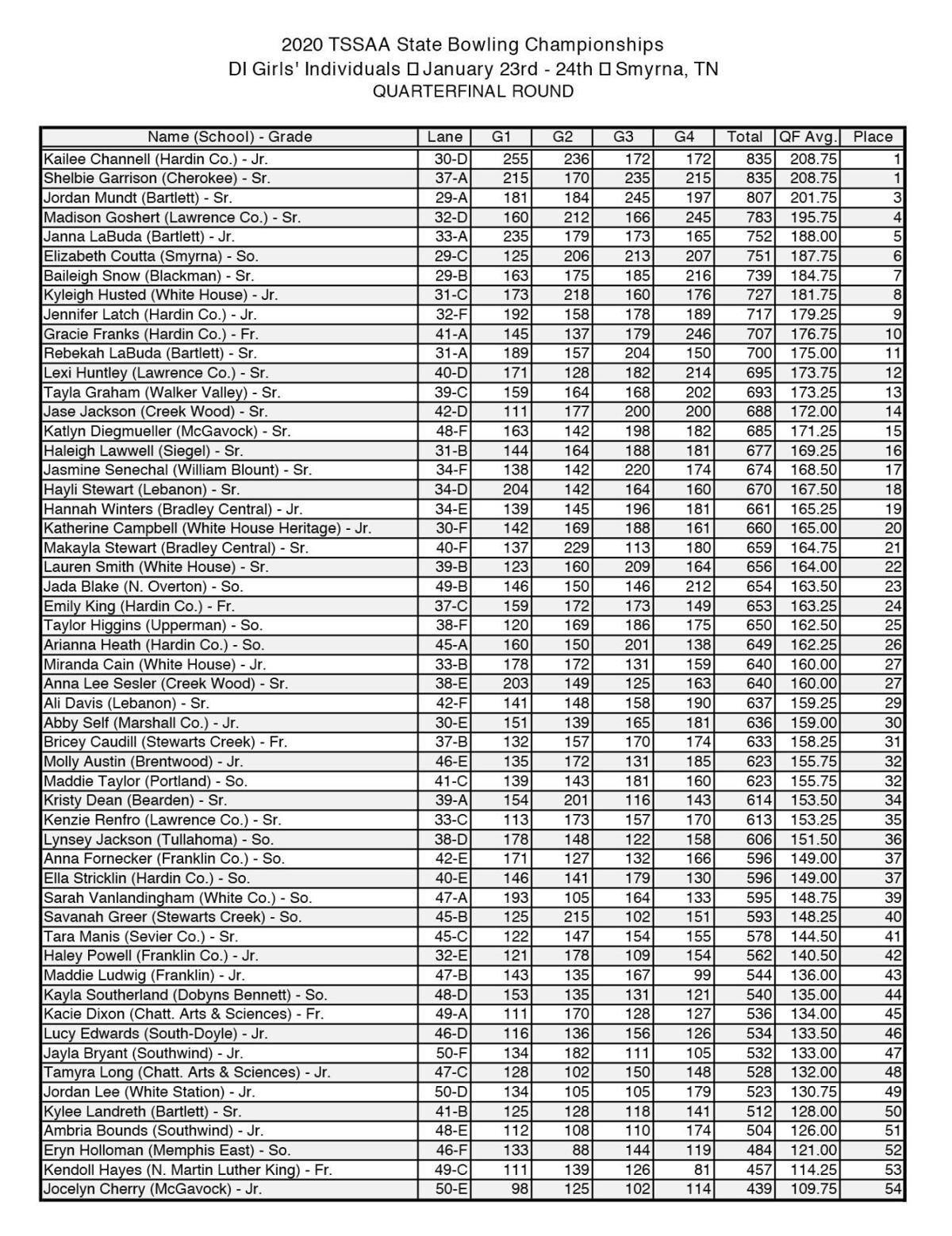 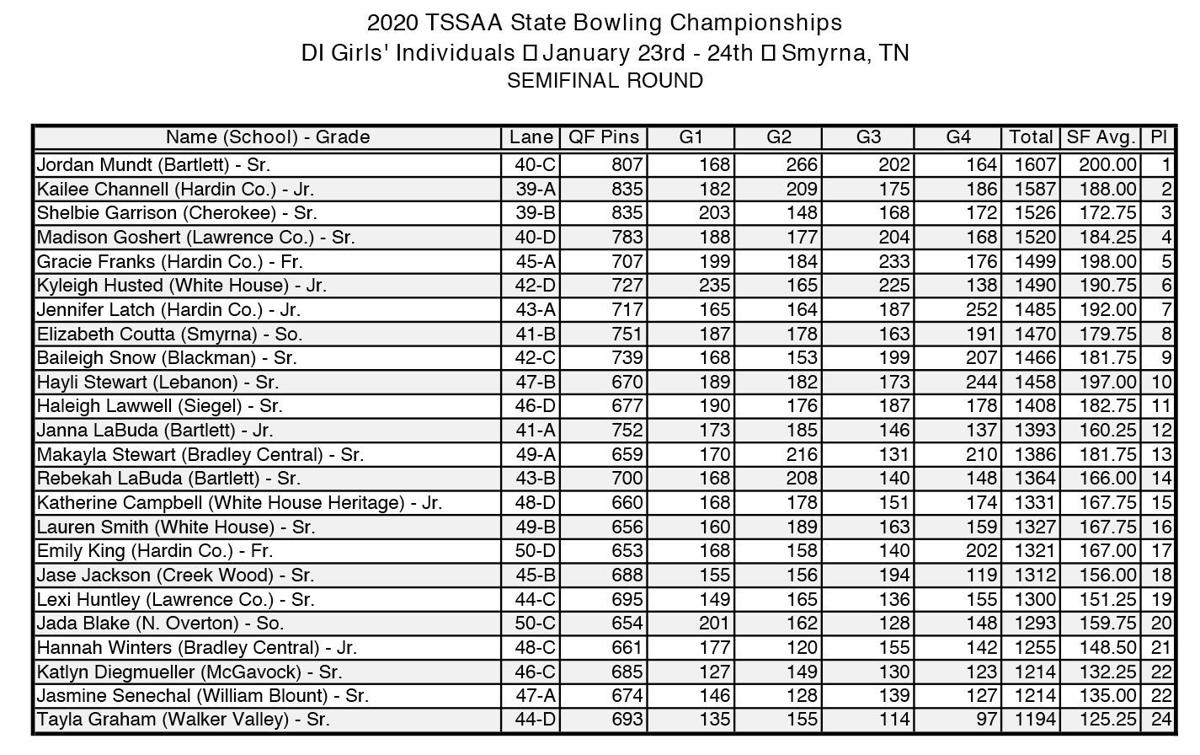 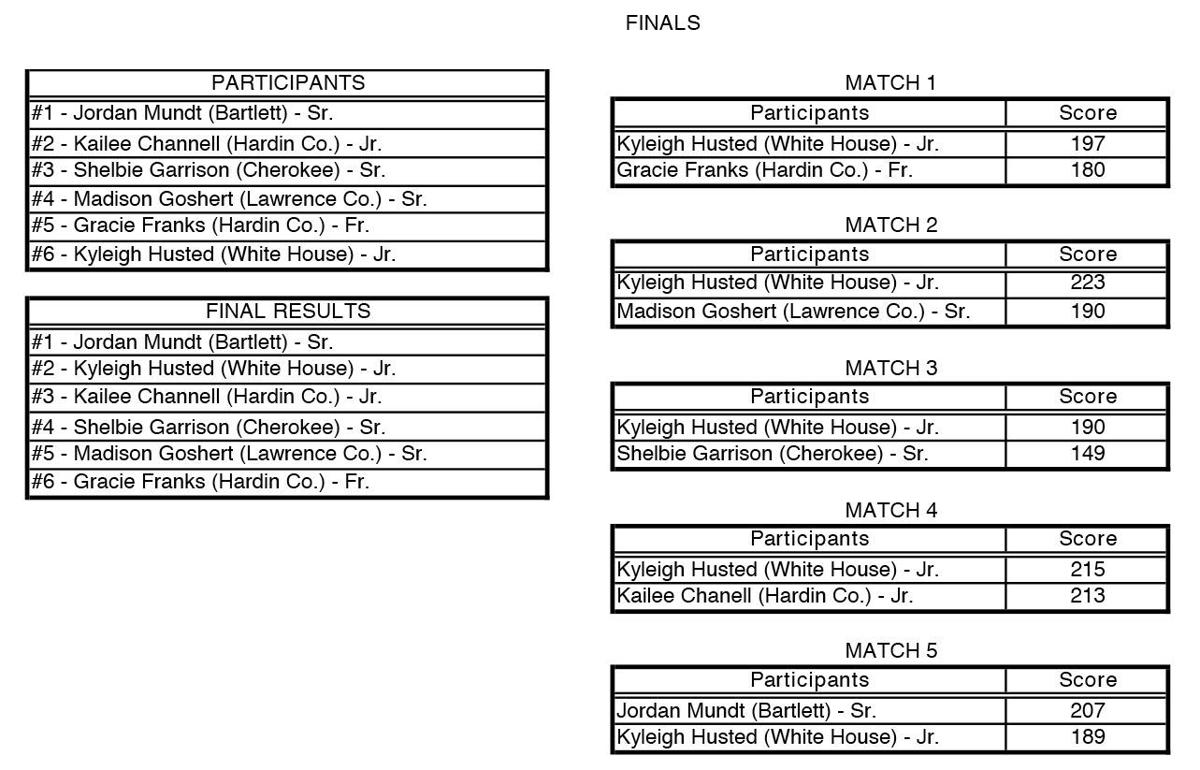 SMYRNA – The start couldn’t have been much worse for Cherokee’s girls bowling team at the Division 1 State Girls Bowling Tournament Friday at the Smyrna Bowling Center.

The previously-undefeated Lady Chiefs ran into a buzz saw in their opponent, Stewarts Creek, which won all six head-to-head matchups and led in total pins, 1095 to 756, in the first game of their three-game match.

“Their coach told me that’s the best they bowled all year,” said Cherokee bowling coach Brad Whitson. “They’re a good team. I didn’t know this was their house (home bowling alley).”

With Stewarts Creek taking an 8-0 lead in the first-to-14 wins scoring system – with another 3 more points for overall pins all but guaranteed for an 11-0 lead – the prospects for a comeback can’t get much bleaker.

Cherokee rallied in the second game to register a 4-4 tie. Although Stewarts Creek won four of the six head-to-head matchups, Cherokee got the 2-point bonus for having a 982-962 pin advantage.

That trimmed the lead to 12-4, but Stewart Creek’s overwhelming, 339-pin advantage gained in the first game, was only reduced by 20 in Game 2, meaning Cherokee would have had to win five of the six head-to-head match-ups in Game 3 by 320 pins to win.

Instead, Stewarts Creek took five of six matches in Game 3, plus 2 points for pin total advantage, and won the match, 22-5.

“To be down 300 pins in the first game, that’s hard to come back from,” said Cherokee girls bowling coach Tara Cuthrell. “They battled back the second game, but you hate to say – too little, too late.

“They came back the second game and battled. We tied 4-4 the second game, but by then it’s done. But I’m proud of them. We had a great year this year,” Cuthrell said.

Despite having a senior-laden team with state tournament experience, the mental aspect of bowling was a factor, Cherokee’s coaches said.

“Nerves, I think, is what got them,” Cuthrell said. “We had our 170-bowler bowling 100 in first time coming to state. It’s a hard experience for them down here. But it happens. It’s all nerves.”

“Our girls have been here three years, all of them have, except for two, and nerves got ‘em again,” Whitson said. “They went the whole game nervous.”

The combination of Cherokee bowlers leaving pins and Stewarts Creek bowlers mowing them all down snowballed frayed nerves as much as the scores.

“Then they started getting scared when they saw those big scores that the other team was putting up,” Whitson said. “They came back and split the second game, 4-4. But with total pins, they can’t overcome that.

While the finish was disappointing, both coaches said the players should be proud of the season they had.

“It is hard to lose the first game we had here, but we had an excellent, excellent team this year,” Whitson said. “I was thrilled to be with them. I had high hopes, but everybody has a bad day and when I thought we were coming together, we just hit a speed bump.”

Cuthrell said she didn’t think the slightly different oil pattern was a factor.

“They’ve been used to it,” she said. “It’s not terribly different. I think it’s just the crowd, the noise and the nerves of being down here.

“But they did well for the season. They went undefeated in the regular season and were regional champs. I’d like to have seen them advance but I’m proud of them,” she said.

“The boys, we just lost two, and that was the first time they ever bowled, and everybody else is coming back,” said Whitson. “And I’m getting three good freshmen. I’ve got high hopes. We’ve already got a full girls team, three returning starters. We’ll be back here again next year hopefully, if everything comes together.”

Garrison finished ranked fourth in the state – pretty darn good, but a disappointing finish to her after her spectacular beginning.

Garrison finished the quarterfinals tied for first place with Hardin County’s Kailee Channell, after both bowled a four-game average of 208.75 (835 total pins).

In the semifinal round, where 24 of the original 54 advanced, Channell and Garrison continued strong bowling, locking up the No. 2 and 3 spots with 1587 amd 1526 pins, respectively. Jordan Mundt of Bartlett took over first place with 1607 pins.

The top six advanced to the “step-ladder” finals.

As it turned out, No. 6, Kyleigh Husted, a junior at White House High School, advanced all the way through the “step ladder,” defeating 5, 4, 3 (Garrison) and 2, before finally losing to 1- Mundt.

Garrison shot an uncharacteristic 149 in her battle with Husted, who bowled a 190.

“Considering I could have bowled a lot worse, I’m very pleased with it,” Garrison said. “To be in the top 10 in the state, I can’t be mad at that. From my personal perspective, I’m a little bit disappointed, bowling a 149. But (I finished) top 5, top 10.”

Garrison said her ball was on target, but pins just kept remaining upright.

“I was hanging around the pocket, which is where right-handers like me – it’s middle pin and the pin to the right of it – you want to stay in pocket. I was right there, I just couldn’t get any strikes to string together. I was covering my spares. I just missed one easy one, a left pocket split, so it was just really rough,” she said.

“It’s a consistent thing because where I was in pocket, I was pretty consistent with all of my shots. And then it was just the same pins over and over. (With) tiny adjustments, whole new pins that would just stay over and over. It was rough,” she said.

“With step-ladder finals, you’re set in this one position. The worst you can finish is right below where you seeded. I seeded third and the worst I could finish was fourth,” she said.

“So, it was really at that point I solidified my finish, so I just decided I am going to go out here and have fun. I did. I didn’t let it get to me like I did the second set yesterday. I managed to stay above it and just have a good time with it. I really couldn’t ask for a better finish. I did well ranked, considering,” Garrison said.

“Shelbie bowled really well,” her coach, Tara Cuthrell said. “Her best series was to get into the top 24. And then she came down a little bit in the last four games, but she made it into the top six. The girl had an excellent game.

“Fourth in the state, you can’t be too disappointed in that. That’s excellent. There were 54 contestants and she was better than 50 of them,” Cuthrell said.

“It’s hard to take a loss at anytime, especially when you get that close to first, so that’s probably where that’s coming from. But she’s got to be proud of fourth in the state,” Cuthrell said.