Warriors coach Jeremy Bailey and a surprise visitor in the lockerroom last season at RMS. 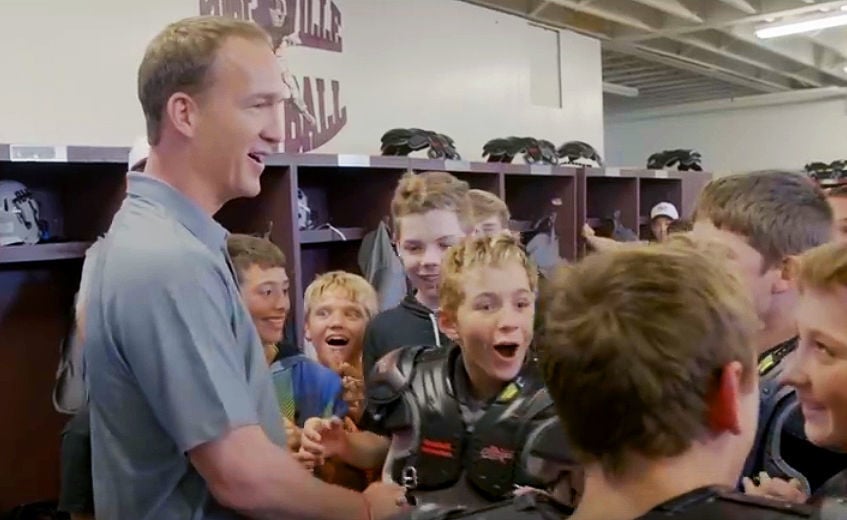 Peyton Manning mingles with RMS Warriors prior to the 2018 season.

Warriors coach Jeremy Bailey and a surprise visitor in the lockerroom last season at RMS.

Peyton Manning mingles with RMS Warriors prior to the 2018 season.

ROGERSVILLE – In what should have been a happy moment for the Rogersville Middle School Warriors, head football coach Jeremy Bailey had to tell his team that they would not get to play in the postseason this year, despite their 7-1 record and second-place finish in the Big 3 Conference.

Due to a scheduling snafu by one of the other county athletic directors earlier in the year, another qualifying playoff team ended up playing too many games late in the season to allow two playoff games during the scheduled playoff time.

“Carter County didn’t adjust their schedule, so Chuckey Doak played Tuesday, Thursday and Saturday,” Bailey said. “That would have been too many games in too short a time.”

But rather than extend the schedule out, athletic directors from Sullivan County and Greene County elected instead to eliminate the first-round game and just have the two top teams play for the championship.

The Warriors, who defeated Sullivan North Middle School, 32-14, to close out their regular season last week, finished the season with a 7-1 record. That made them the conference runner-up and the number two seed out of the Big 3 Conference headed into playoffs.

The Warriors’ first-round match-up should have been against Little Watauga Conference champion, Chucky-Doak Middle School, at Chucky-Doak High School Saturday, but that would have been too many games in too small a timespan for the Black Knights.

So the Greene County school got a bye to the title game this Thursday against Colonial Heights and RMS got a one-way ticket to Palookaville.

“It’s wrong to the kids,” Bailey said. “They’ve worked their tails off this season and the week before the playoffs, you’re gonna yank it from them? Seven of the nine coaches voted for this playoff.”

Instead, Bailey had to break it to the Warriors in a players and parents meeting Thursday at the school.

“There were a lot of sad faces in there,” Bailey said.

The last 12 months have been a whirlwind for the Warriors.

Last year, the football team was one of 18 winners nationwide awarded $10,000 worth of brand-new Riddell football equipment featuring state-of-the-art, safety technology in a company promotion, with an accompanying visit from legendary quarterback Peyton Manning and slick promotional video that became a YouTube hit.

The slick-made video opened with Bailey and assistant James White leading the Warriors through practice while music builds in the background and Manning narrates.

“The Smarter Football Movement is a collective appreciation for this game and the values and lessons it provides,” Manning says in the video. “Discipline, accountability, sacrifice and teamwork.”

The angles of the football action from in the grass to the drone footage shot above the field and the music are NFL Films quality. The action cuts from RMS to a train hauling cars of coal on a track cut through trees, then to a shot above the Holston River, then slowly zooming in from the sky to RMS.

“In a small town nestled in the foothills of Tennessee, a town with ancestry linked to Davy Crockett, one school epitomizes the value in those lessons. Rogersville Middle School.”

The resulting excitement and pride felt by the RMS family was palpable and reflected by the subsequent sprucing up of the campus of paint, repairs and landscaping by school officials and volunteers.

It further led to what unofficial eyeball estimates revealed to be RMS easily having the largest increase in participation of any middle school football program in Hawkins County in 2019, which certainly didn’t hurt the Warriors surging through the season to a 7-1 record and playoff berth.

But that berth won’t be fulfilled due to circumstances beyond their control, a sad conclusion to a successful season and lazy alternative to what should have been a simple rescheduling.

“I don’t need to coach a playoff game,” Bailey said. “I don’t need it for me. But it’s not fair to the kids. I just hate it for them.”

So the year-plus period from the peak of practicing football in brand-new equipment on their home field with Peyton Manning to the valley of crestfallen kids finding out their season is unceremoniously over serves as an early lesson that life won’t always be fair.

Although the Warriors won’t get to compete in a playoff game this season, they’ll still be viewed proudly around here as champions in the collective eyes of the Rogersville Middle School family and community.