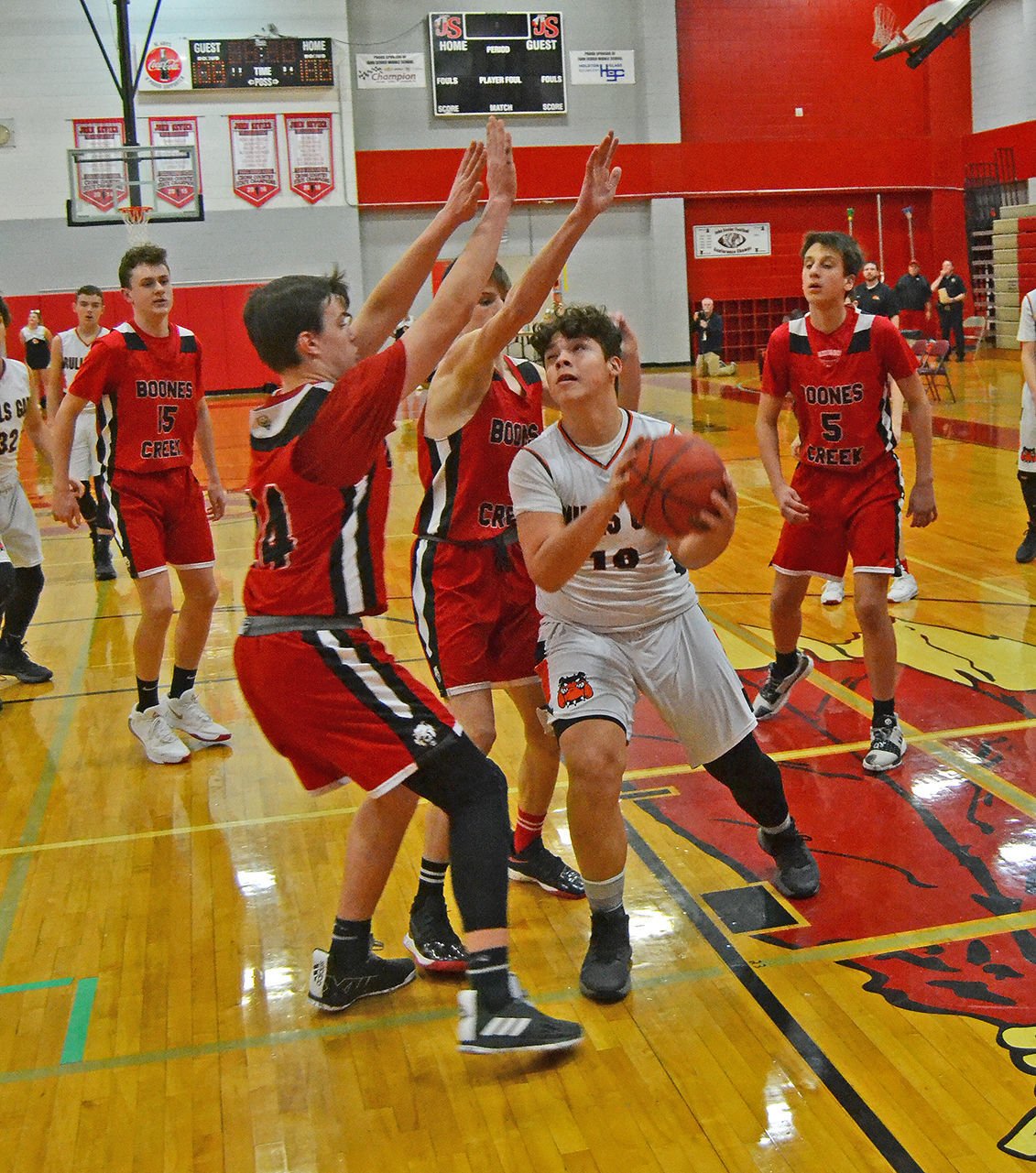 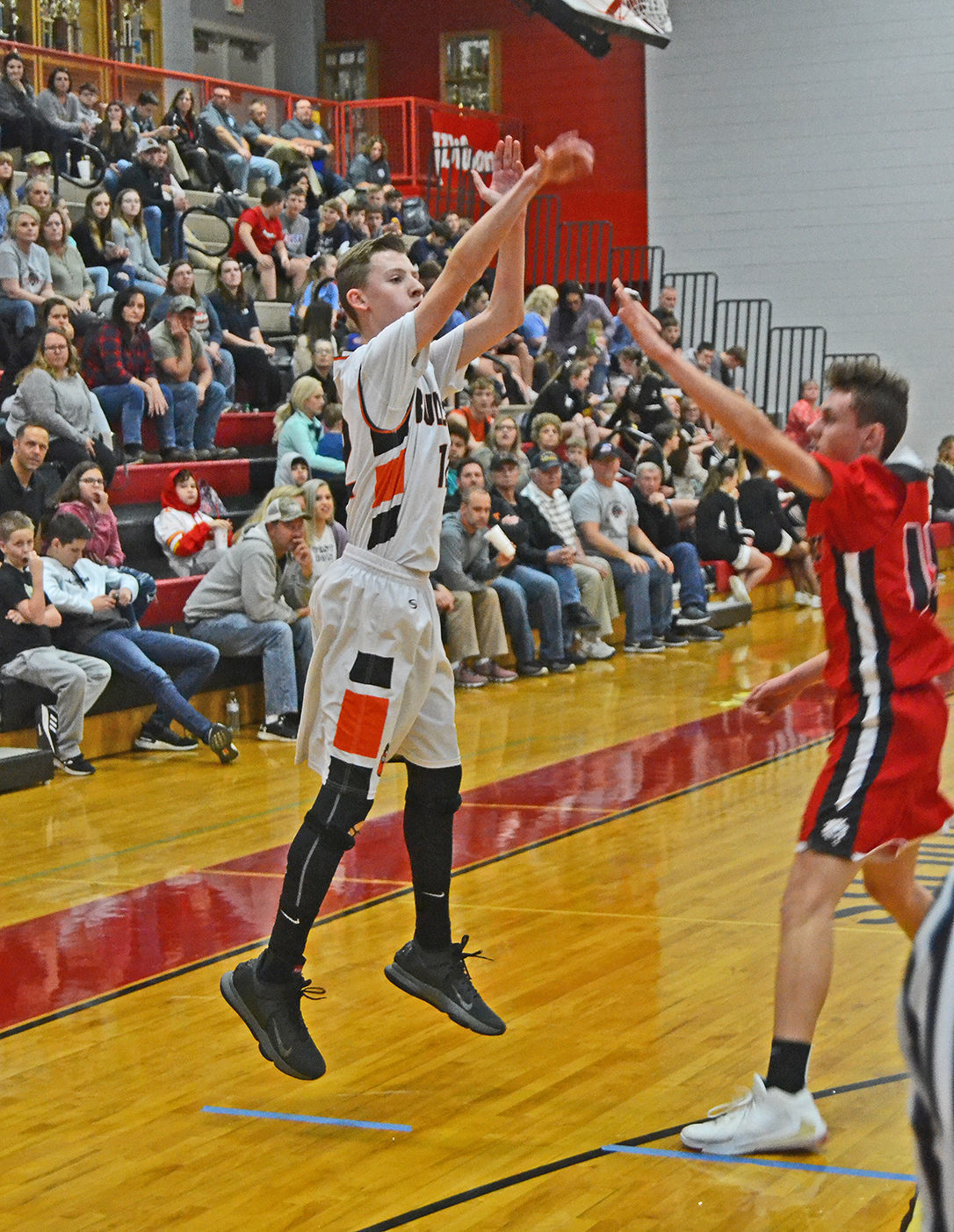 Elisha Jones hits one of his three 3-pointers for Bulls Gap Monday. 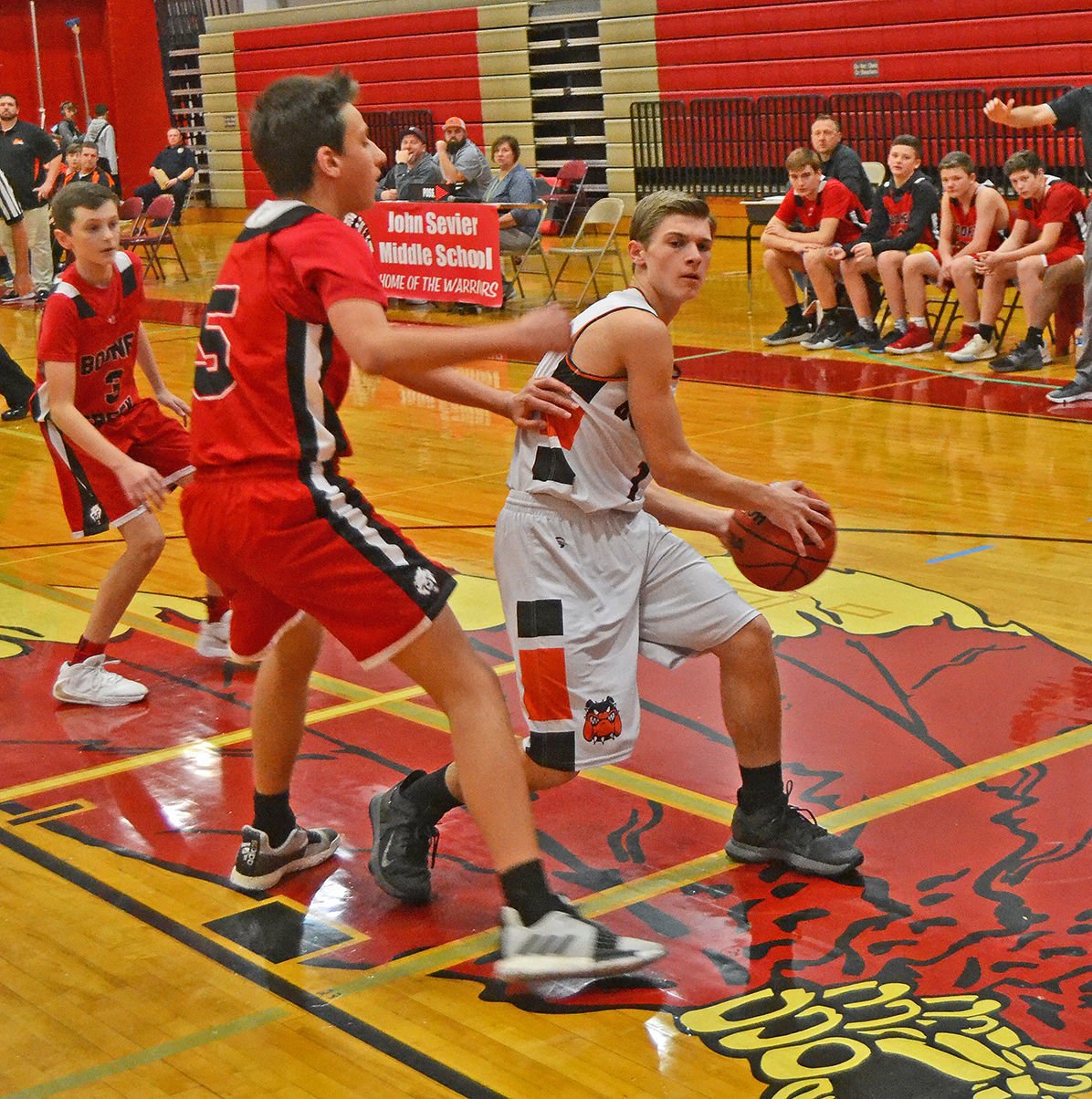 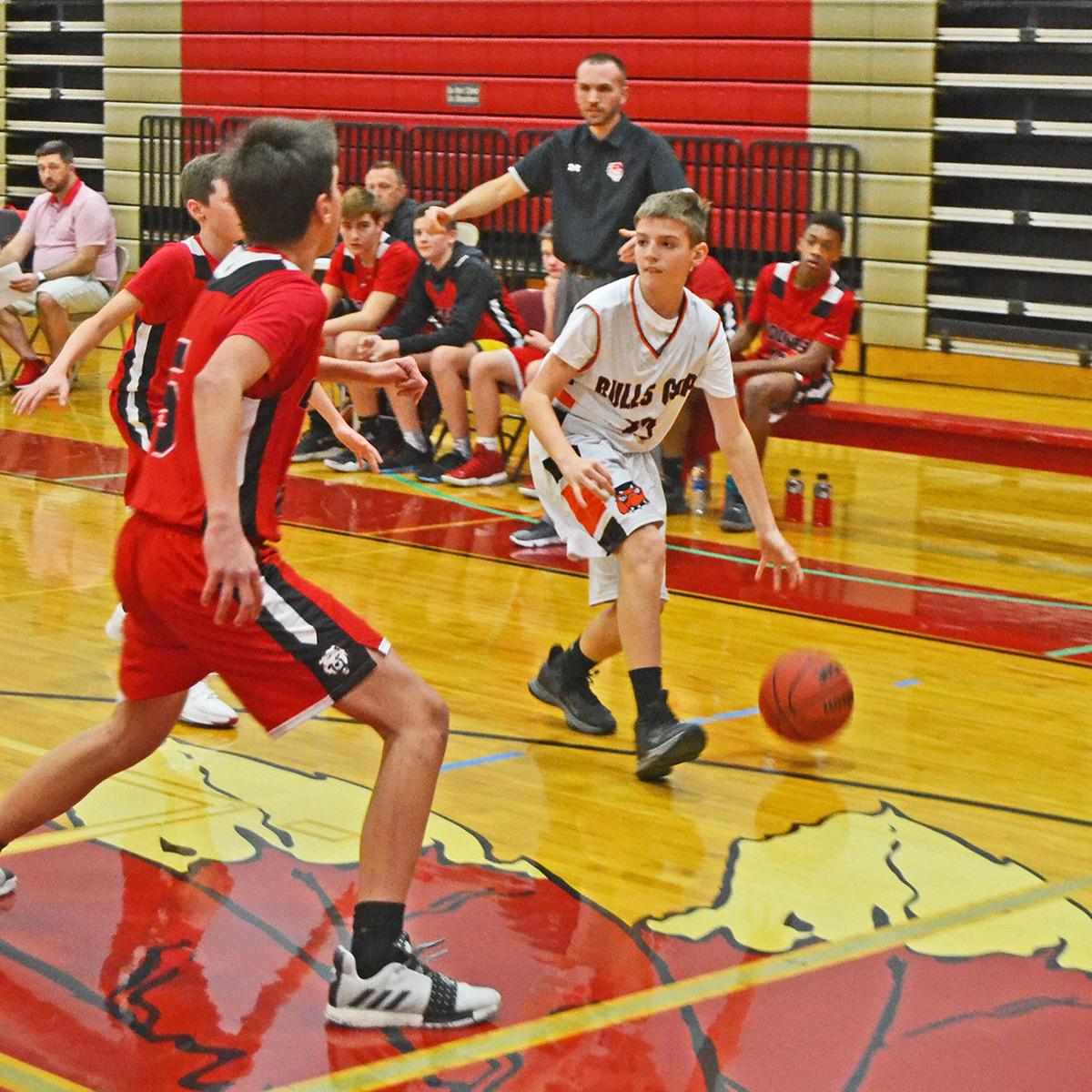 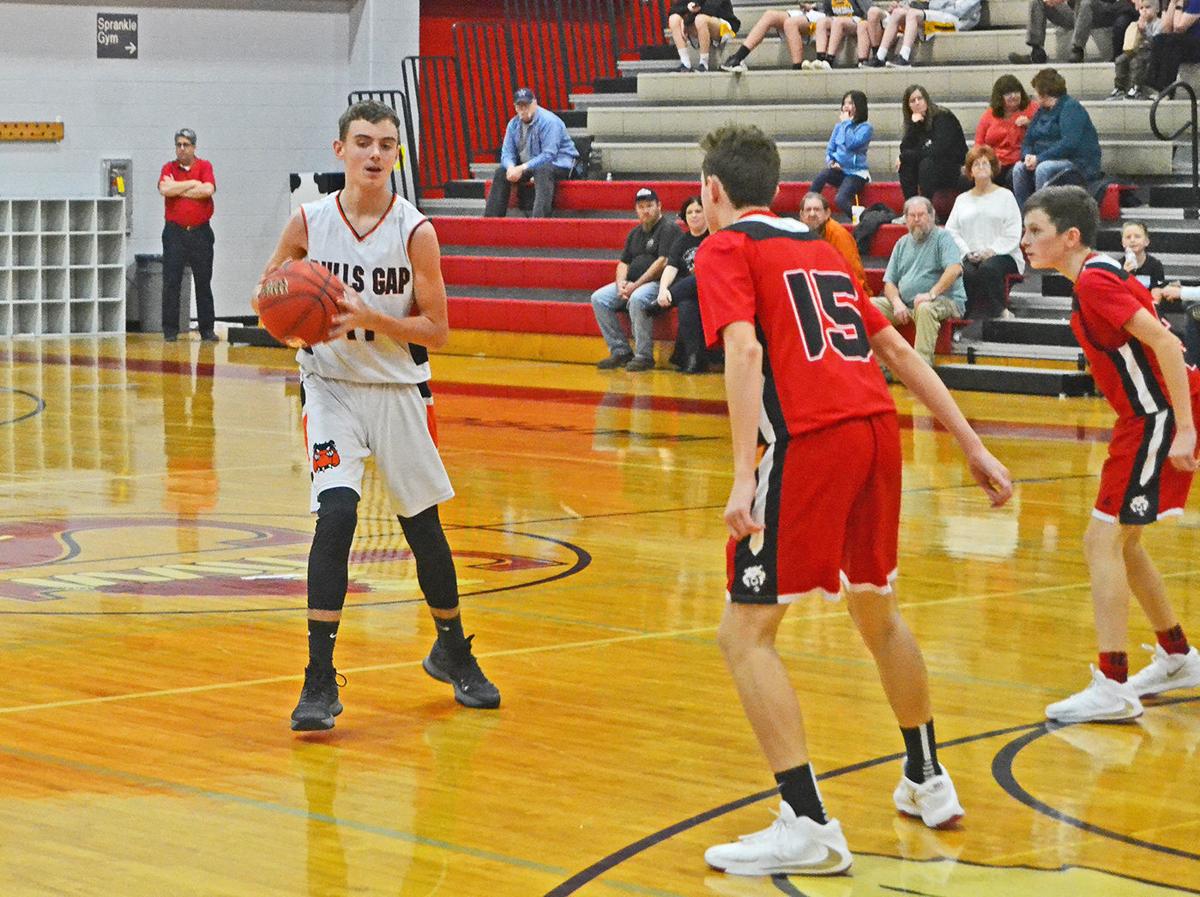 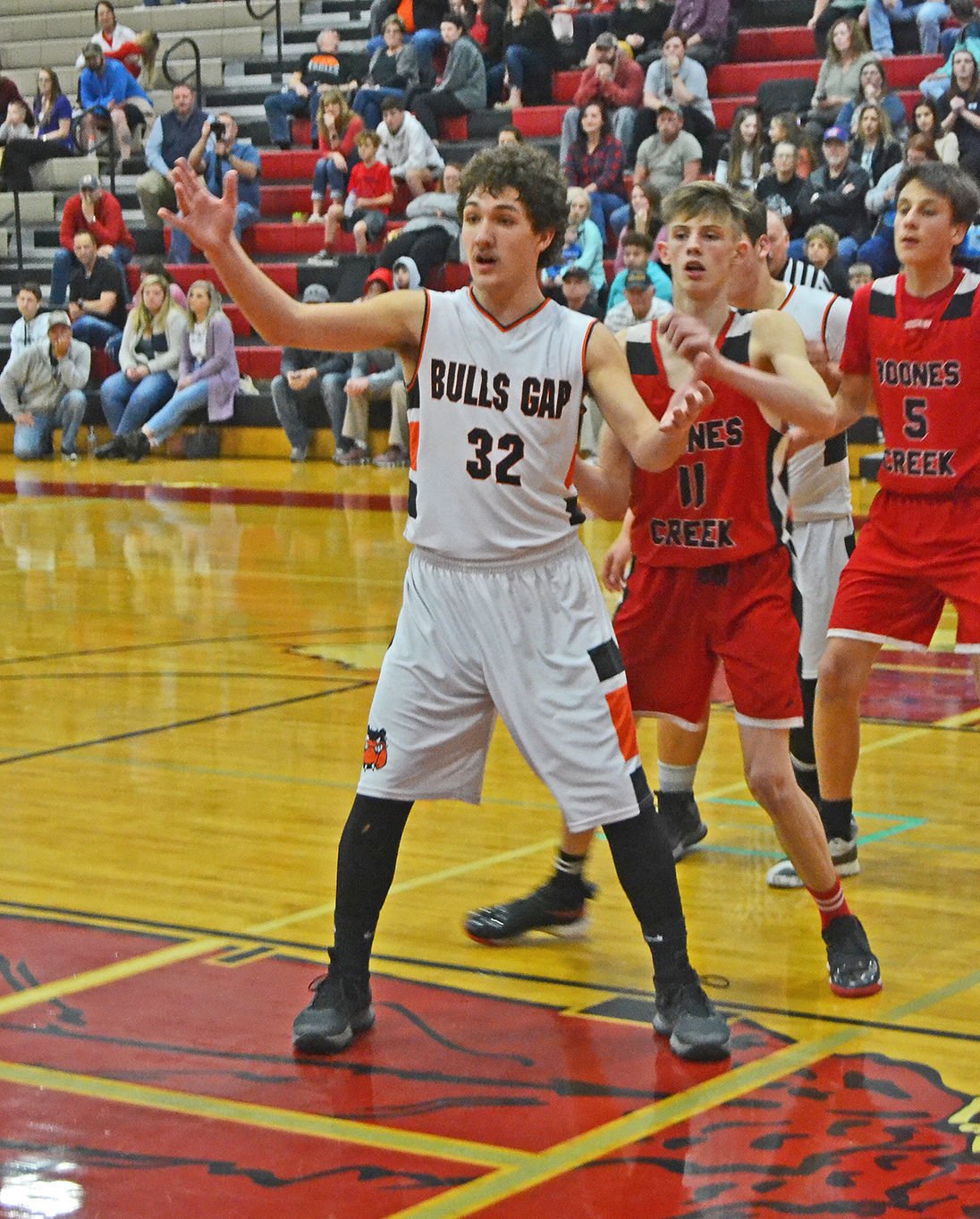 Elisha Jones hits one of his three 3-pointers for Bulls Gap Monday.

KINGSPORT – Boones Creek put the defensive clamps on Bulls Gap early and kept the Bulldogs from getting going as the Black Bears captured a 39-21 victory Monday in the quarterfinals of the Section 1 Class A boys basketball tournament at John Sevier Middle School.

The Black Bears spotted Bulls Gap an Andres Moncier post-up basket one minute into the game, then held the Bulldogs scoreless the next 6:15 of the game in building an 8-2 lead, keyed by Tim McGonigle’s two three-pointers.

Noah Seals came off the bench for the Bulldogs and hit a three with 4:45 left in the first half to end the drought and close the margin to 8-5.

Elisha Jones’ three with 1:23 left in the second quarter ended the first-half scoring and pulled the ‘Dawgs to within 13-10 at the break.

A jumper by Aiden Riner to start the second half lifted the Black Bears to a 15-10 lead. Moncier answered with a drive to trim the lead back to three, 15-12, but Boones Creek put the Bulldogs in another drought, going on a 7-1 run to take a 22-13 lead.

Jones snapped the run with a three-pointer at the 1:13 mark of the third, but a drive by Nick Lowitzke pushed Boones Creek’s lead back to eight, 24-16, to close the third quarter.

The Black Bears opened the fourth with a 5-0 spurt – a three by Henry Hamlin and two free throws by Riner – to open up a 29-16 lead.

Jones’ third three-pointer of the game temporarily stopped the Boones Creek run and cut the lead to 10, 29-19, but the Bears forced turnovers and converted four straight layups to ignite a 10-2 run to close the game.

Jones and Moncier led Bulls Gap with nine points each.

Elisha Jones hit 3-of-4 free throws in overtime while teammate Bryce Elliott hit a three as the Bulldogs beat Providence, 43-40, Saturday at John Sevier Middle School to advance to the quarterfinals of the Section 1 Class A boys basketball tournament.

The Bulldogs held a slim, 16-14 lead heading into halftime, thanks to 7-of-11 free throw shooting, including 4-of-4 by Jones.

Providence opened up a 29-24 lead in the third quarter, keyed by three 3-pointers.

The Bulldogs rallied in the fourth as they continued to shoot well from the line. Jones was 2-of-2 in the quarter, while Moncier sank 4-of-6. The Bulldogs hit 19-of-26 for the game.

Jones led Bulls Gap with 14 points, including 9-of-10 from the line, while Moncier scored 12, including 8-of-11 from the stripe. Elliott added 10, including two 3-pointers.