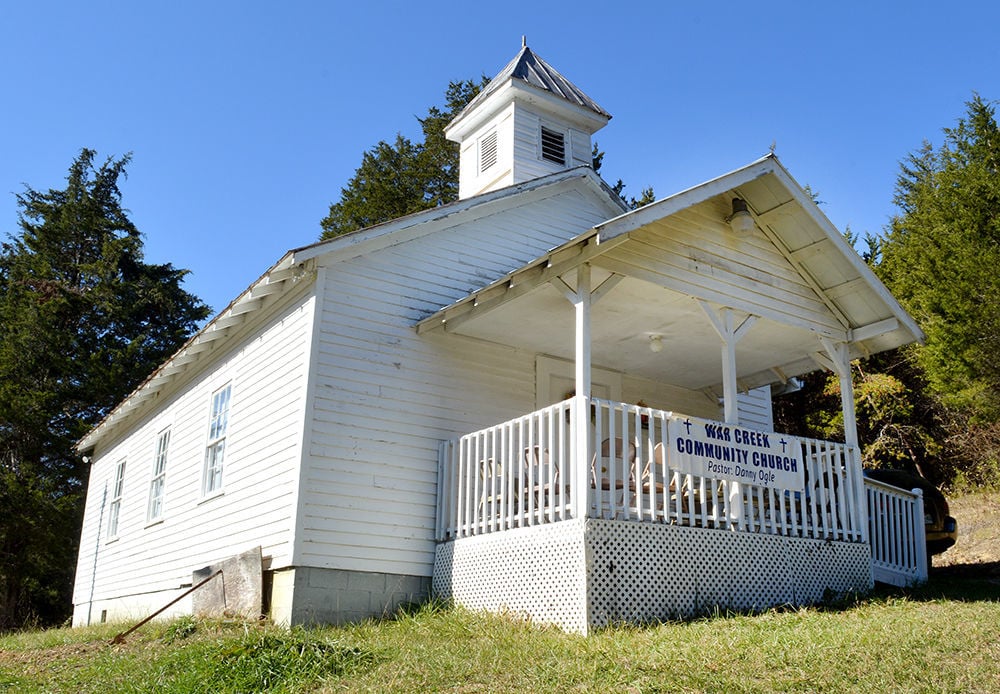 The exterior of War Creek Community Church, located in the shadow of Clinch Mountain at 697 War Creek Road, in the Eidson community of Hawkins County, not far from the Hancock County line. 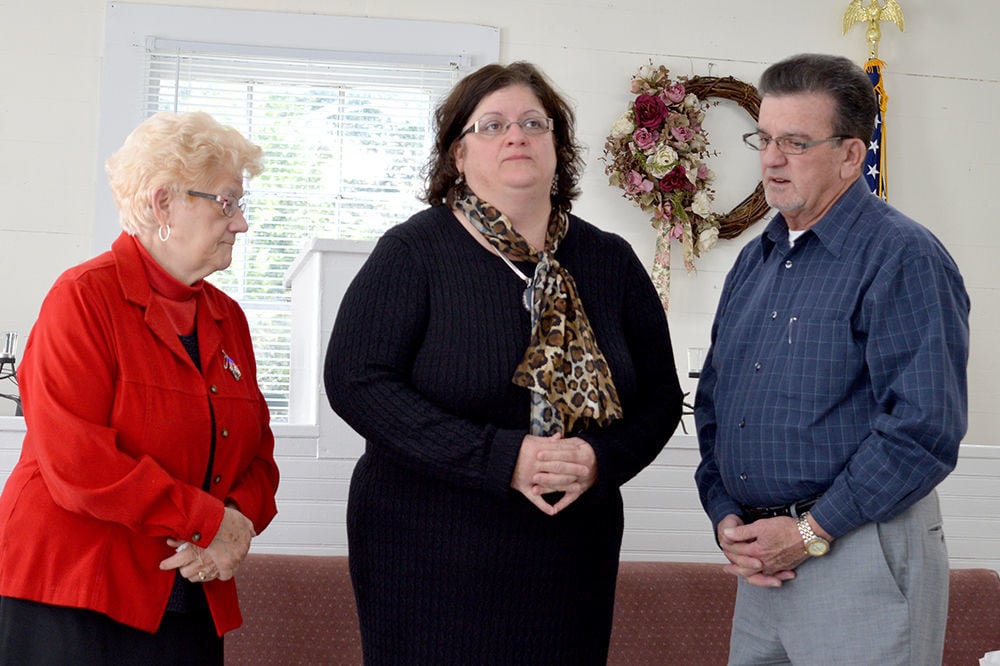 Lori Ogle (center) is joined by her parents, Ronnie and JoAnn Beeler, in a beautiful acapella rendition of “The Lighthouse” — in three part harmony — during this past Sunday’s worship service. 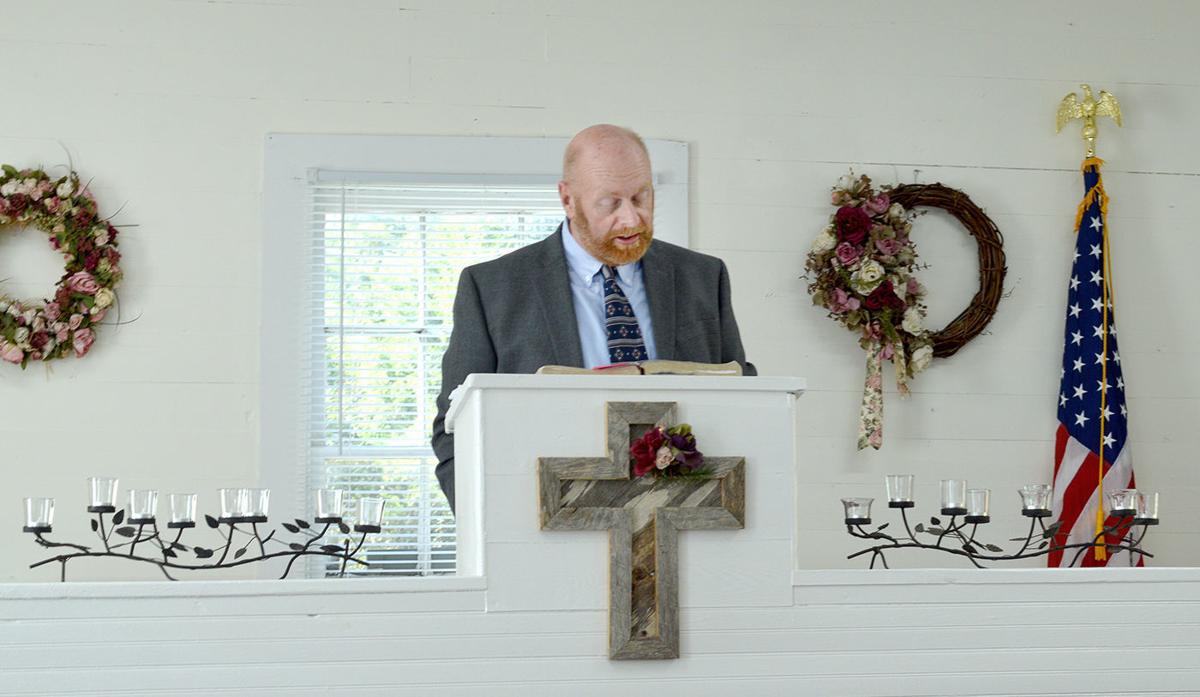 The exterior of War Creek Community Church, located in the shadow of Clinch Mountain at 697 War Creek Road, in the Eidson community of Hawkins County, not far from the Hancock County line.

Lori Ogle (center) is joined by her parents, Ronnie and JoAnn Beeler, in a beautiful acapella rendition of “The Lighthouse” — in three part harmony — during this past Sunday’s worship service.

EIDSON — A Hawkins County church, which had been idle and empty as a house of worship for more than a decade, is enjoying a resurrection, thanks to a series of events that began with a couple taking a wrong turn.

“Its just amazing how God can take something like that and open a new door for ministry,” Pastor Danny Ogle told the Review prior to the beginning of the Sunday morning service on Nov. 10.

After giving his life to Christ at the age of seven, it was a bloody auto accident some 10 years later that led Danny to realize he was being called into the ministry.

“I knew then that I was being called to preach,” he said. “With blood running down my face, I knelt down and prayed right there on the interstate that God would use me for whatever He wanted me to do.”

After serving as a bi-vocational pastor in a number of churches for the past 30 years, a series of events led Danny to take a job as custodian at Hancock Co. High School, in Sneedville.

Danny and his wife, Lori, a nurse practitioner, and their daughter, Brittany, acquired an 1820’s-era farmhouse adjacent to the church in March of this year, but their story actually began more than a year earlier when the couple was enroute to attend a meeting in West Virginia for the nursing home organization that Mrs. Ogle works for.

“We took a wrong turn somewhere and ended up on this narrow road,” Danny chuckled. “We were lost, we didn’t have a clue where we were and there was no cell service so the GPS on our phones didn’t work.”

Eventually, the couple decided to turn around in the driveway of a farmhouse, found their way back to the main road and went on their way.

Later, when the couple decided to move to the area and began searching for a home, they went to look at a farmhouse that was for sale, and realized that it was the very same property at which they had turned around at more than a year prior.

“Lori remembered it, and said, ‘that’s the house!’” Danny said.

When War Creek Church closed about 10 years ago, a clause in the deed stipulated that if the building ever ceased to be used as a church, ownership of the building would revert to the property owner.

“And that’s how we came to own it,” Danny said. “We stepped out on faith. When we bought the house, the owner gave us the church building, too.”

The couple went to work cleaning, scrubbing, repairing and sprucing up the church, which, at that time, did not have running water.

“Oneal Greene came and ran the water line for us, so now we have a functional bathroom,” Danny said. “Lori got down on her hands and knees and painted the floor. Over the years, the furniture and fixtures were all taken out, all except for a piano. Somebody was actually living in here at one time.”

A fresh coat of paint, a podium, adding a Christian and American flag to the stage, some simple and tasteful decor around the sanctuary, and investing “lots of love and attention” has transformed the small, wood-frame building into a fully functional and inviting house of worship.

The pews in the church were “surplus” that were obtained from a funeral home.

The first service was held in September and Danny said that the small building was packed, with many of those in attendance being from their “sponsor” church, Surgoinsville First Baptist.

Mrs. Ogle’s parents, Ronnie and JoAnn Beeler, are frequent visitors, often join their daughter in singing beautiful acapella trios in three-part harmony, and have also helped in many ways with renovations at the church and at the couple’s farmhouse.

The house, he said, is also a work in progress. A thick hand-hewn log above the fireplace bears the chiseled date “1829”.

“We figured it had been around for a long time, we just didn’t know it was that old,” he said.

Danny said that he truly appreciates all of the love and support that they have received from Pastor Tecky Hicks and the congregation of Surgoinsville First Baptist Church, and from the Holston Valley Baptist Association.

“We love it here,” Danny said. “It is so peaceful in this valley.”

The couple has made an effort to reach out and visit people in the community, and welcome all.

“There are so many people, so many needs, and we just want everyone to feel welcome here,” he said. “We want them to know that God loves them and so do we.”

For now, the church has services on Sundays at 11 a.m., but the pastor hopes to eventually add an evening service.

“I encourage people to choose the good because there is nothing bad about God,” Danny said in his morning message. “When we go with faith, that can unlock the door to more blessings than we could ever imagine.”

And, he added, it doesn’t matter if there’s “only a couple or a houseful here on Sunday, we worship, we thank God for His blessings, we pray, we sing, and we thank God for our time together!”